The garden is coming alive again, finally!  It seemed like everything just turned green overnight here, but actually the trees really leafed out while we were gone for a week.  Still, the transformation from bare limbs to verdant green means spring is well and truly here. Our driveway down the mountain is glorious, and the overhanging dogwood is still in bloom. 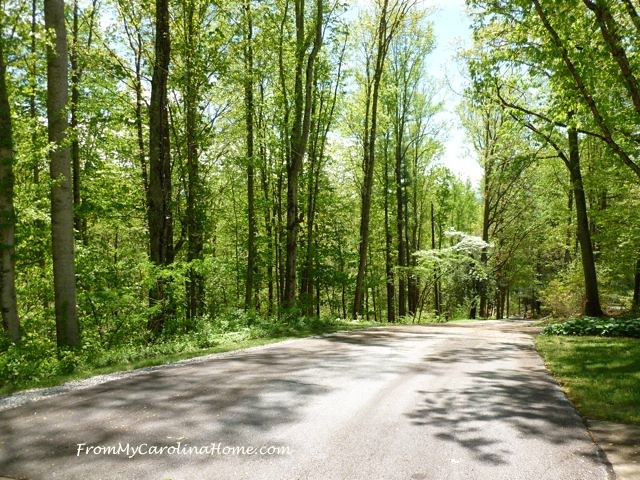 So, a trip to the garden center was in order to pick up the torenias, and a few other plants to turn the veranda into an lush, flower filled outdoor room. 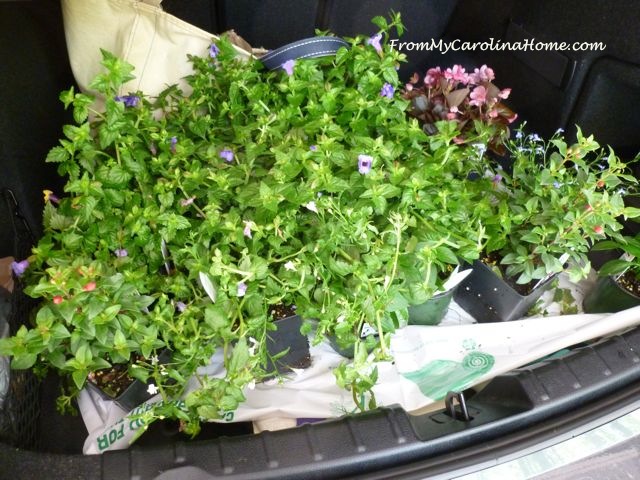 Going to buy plants is so fun, and it is difficult not to just go crazy with all the colors and types of flowers.  This is Raymonds, my favorite spot to buy flowers. 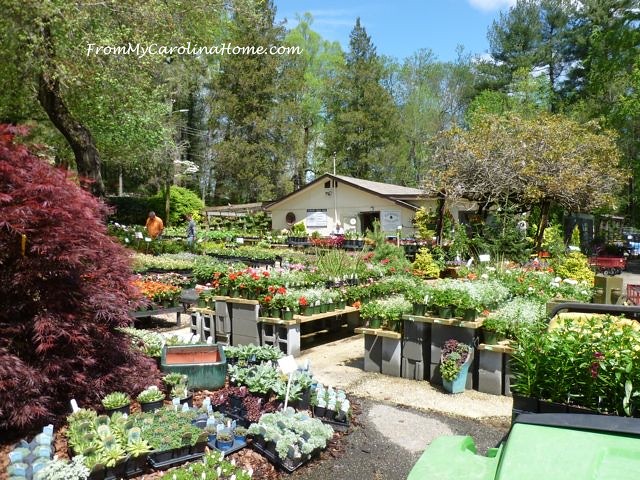 I have plenty of pots to fill, some new ones from the thrift stores and some that have been on the veranda for a long time. A couple of gifts from friends of pots or plants all need to be dealt with. DH was kind enough to move my potting bench up to the upper level and set it in the shade for me.  I had to make a second trip out to the local big box hardware store’s garden center for more small seedlings and tomato plants. My bargain buy for this season is the white petunia basket on the ground. Actually I bought two of them on the clearance rack, just $3 each and they contain seven plants each! Just deadheading the spent blooms and a little water is all that was needed. White impatiens will once again occupy the table planters. They are just so perfect, and grow so well in the shade that nothing else would do as well there.  In the background, the redbud is done blooming, and the azaleas finished up while we were gone too, so I didn’t get a lot of pictures of them in full flower. 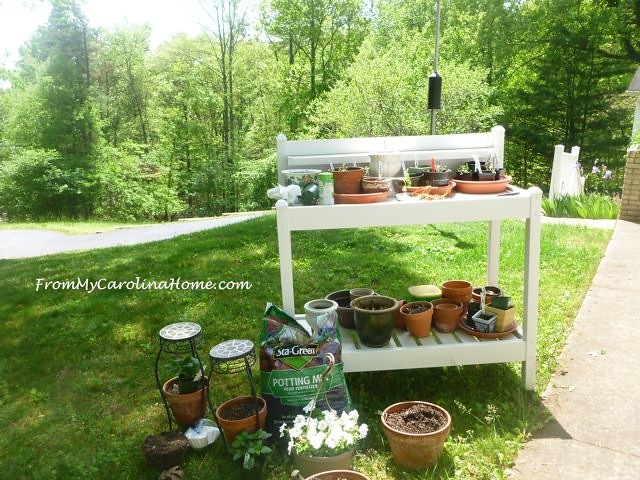 Torenias will be the hanging baskets once again as I love having the hummingbirds and butterflies.  I place coffee filters in the bottom of the pots to keep the dirt in while allowing excess water to drain.  Adding potting soil, and this year I am shaking in a sprinkle of slow-acting fertilizer and a bit of bone meal into the very bottom soil which is reused from last year.  Then fresh potting soil is added over that and the plants set into place. 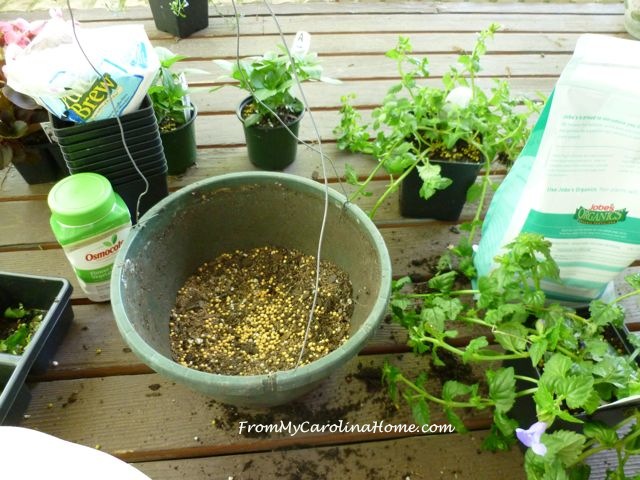 Three to a basket, they are hung on the hooks on the veranda. 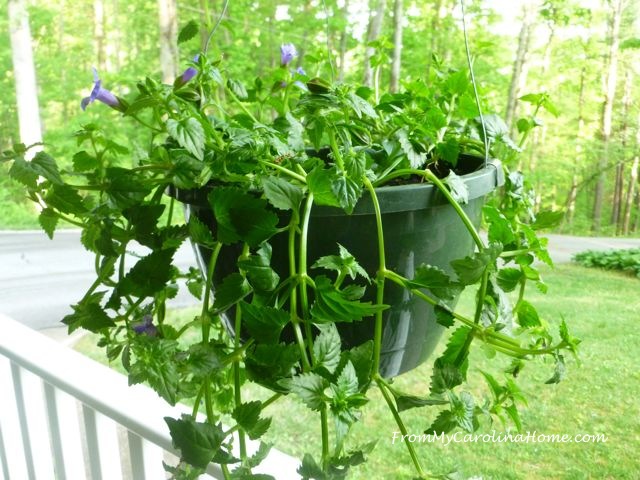 The veranda holds four baskets between the pillars. 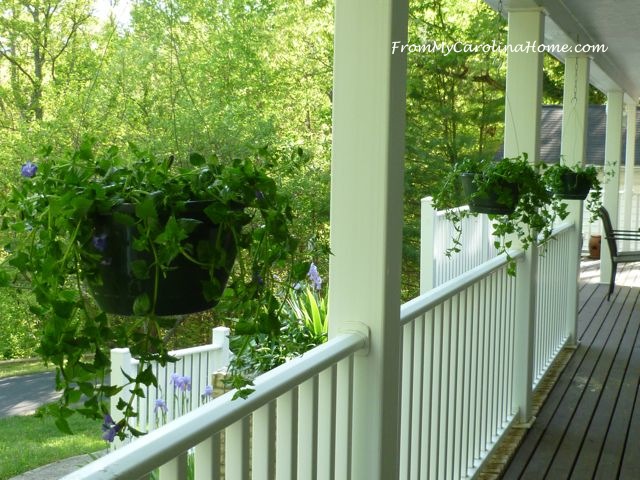 I picked pink begonias this year instead of the yellow I’ve had for several years.  Good to mix things up so the veranda is a bit different each year. I put one in each of these taller planters I got at the thrift store, along with a white petunia. These will go on either side of the front door. 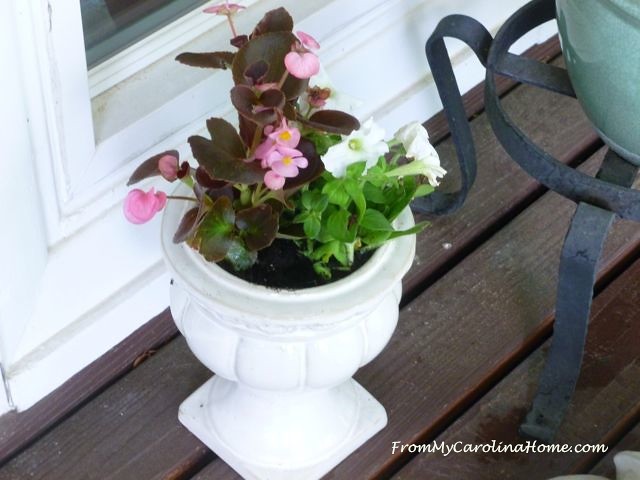 New this year will be this fuschia placed in a pot on a stand to allow it to cascade down the sides.  I had one of these several years ago but I tend to forget about them.  This year they were next to the torenias at the garden center, so I got two.  This variety will have dark pink, purple and white flowers.  A little fairy has moved his bakery into the pot too. 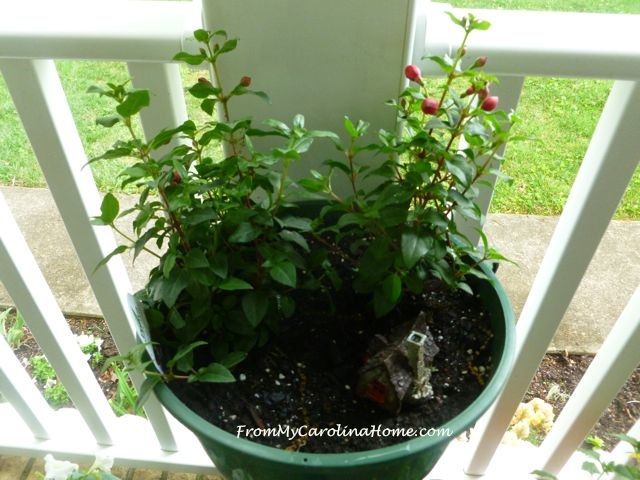 Lobelias have such a vibrant blue color and bloom profusely. This year I got one in blue and one in white. More and more I am gravitating to mixed pots of flowers with different colors together instead of single varieties. Last December, a friend gifted me with this white poinsettia, and it is still alive. So I put it in the large ceramic planter next to the door, along with the blue lobelia and a peach begonia, also a gift from another friend. 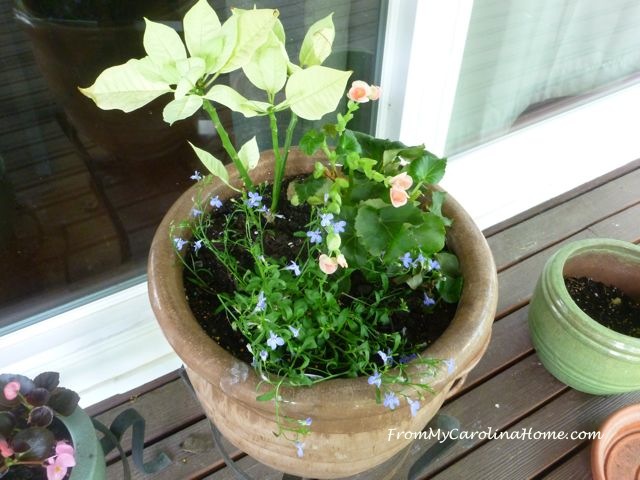 This yellow daisy was another gift from friend.  I just realized that my friends just seem to like to bring me flowers! I seem to get new ones every time I have a luncheon or dinner party. I put it in the larger planter on the corner of the veranda with a pink coleus and yet another white petunia. 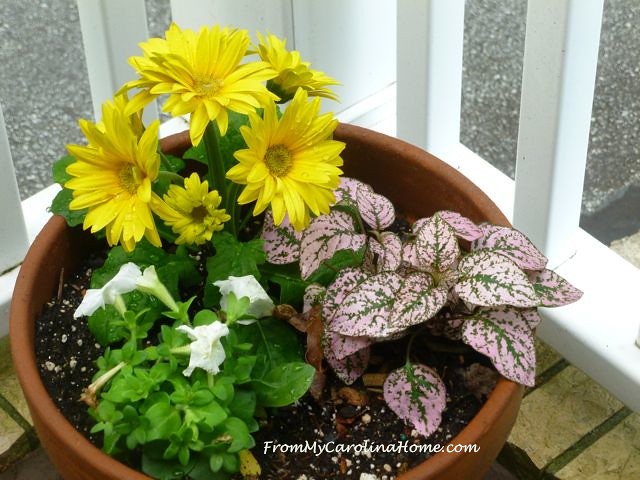 This blue pot sits on a stand, and was planted with a pink begonia and a small basil plant. I wanted at least one of the basils near the door in case I need some when it is raining. 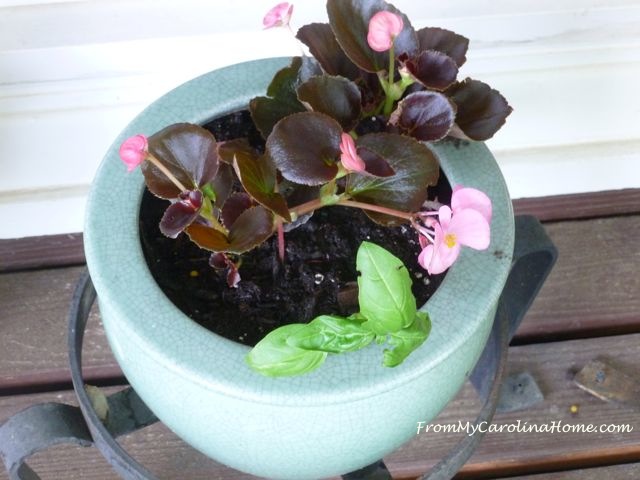 More pots are planted, and set around the veranda.  Pink begonia int he little blue rimmed pot, and a white one with a basil plant in one of the Chinese planters. 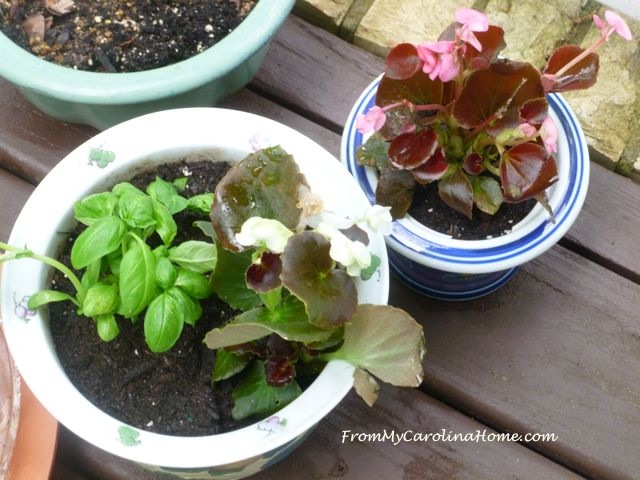 Another pot is planted with a couple of yellow celosias along with the white petunia. I haven’t had these before, so looking forward to seeing how they do. 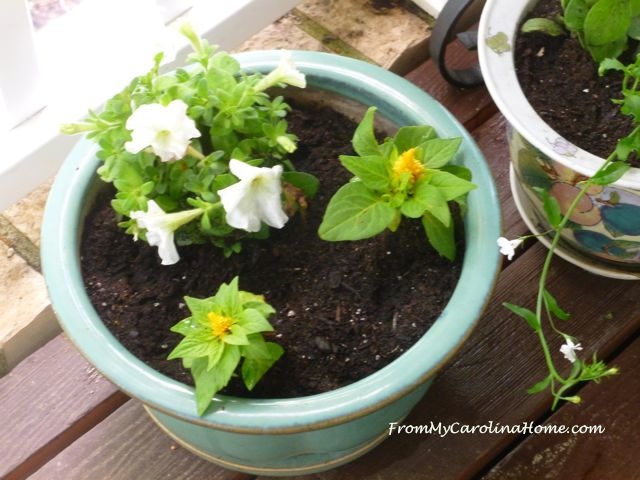 I put the yellow torenias in the rectangular pot like last year. I like the way they cascade down the sides of the planter. Another fairy has moved his house to the veranda, I wonder what his home is like up those little stairs behind the door. The white lobelia got its own pot. 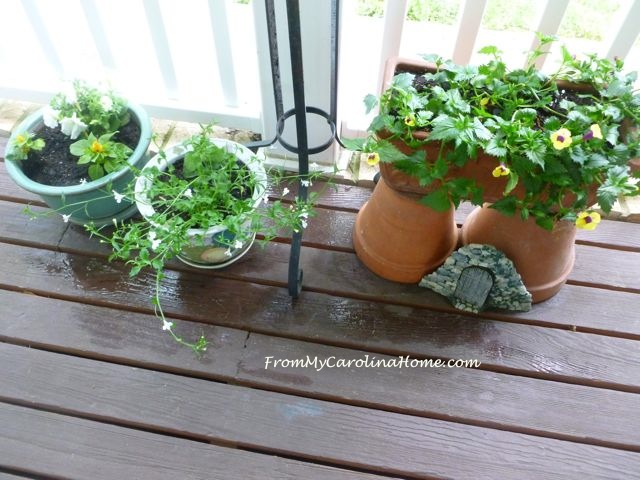 My seedling starts were not a success, not a dismal failure, but somewhere between.  A few plants did OK, but many didn’t survive and I have no idea why.  I put them under the grow light, and watered them carefully, yet many died after putting out their first set of leaves.  The squash and tomatoes I replanted and the second ones are still alive.  Some of the lettuce looks viable still, but all the herbs need to be restarted.  All the johnny jump-ups died, and that is one of my favorite flowers.  I got some more seeds to start again. 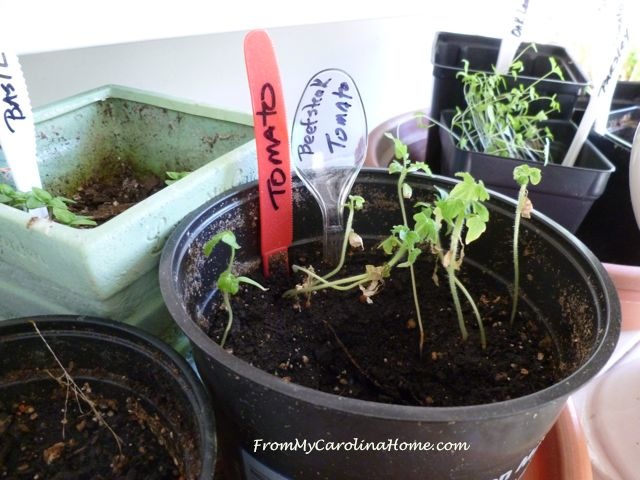 I set them outside a week before transplanting to harden them off. 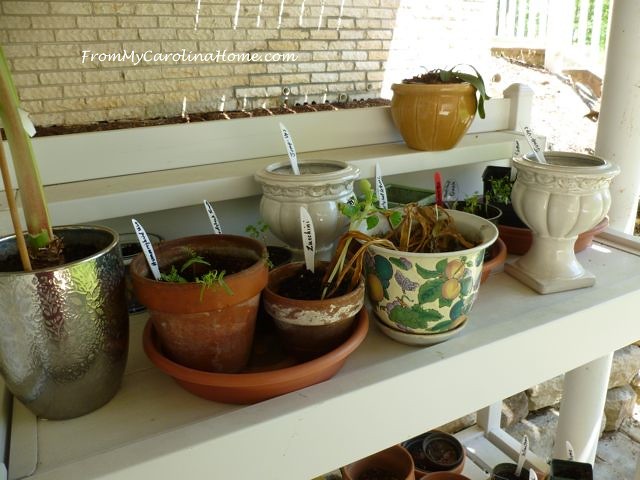 The hummingbird vine second planting is looking good. I put it next to the lattice in the front flower bed. 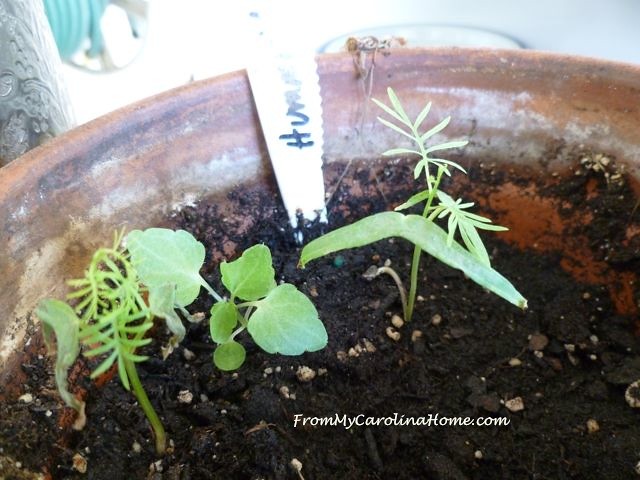 In the front flower bed, the veggies and flower seedlings were placed in front of the perennials. I got another perennial in a deep purple called a Veronica ‘Inspire Blue’. It is supposed to bloom all summer, so the butterflies should be happy. It has the potential to get 2 feet tall! I put the lattice back out again, and added white bargain petunias to the clay pots that hold it up. 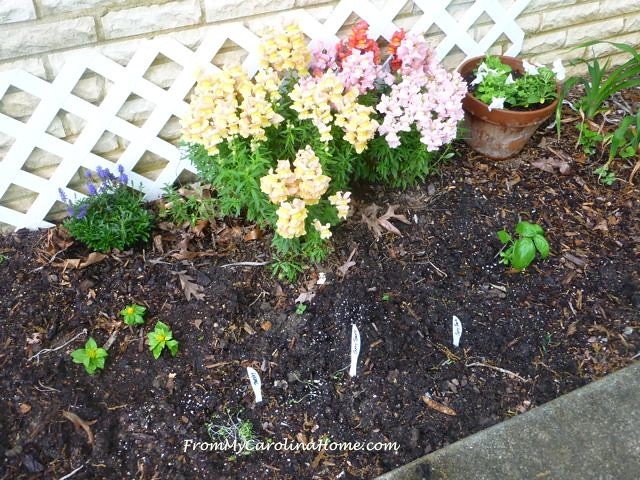 The snapdragons were supposed to be annuals, but our winter was so mild that they survived. We are Zone 7 and they aren’t supposed to be considered perennials until Zone 9, but who knows!! I am enjoying their beautiful blooms this year too. I got them for just 25 cents a plant last year on the clearance table at the hardware store’s garden center. Great buy! 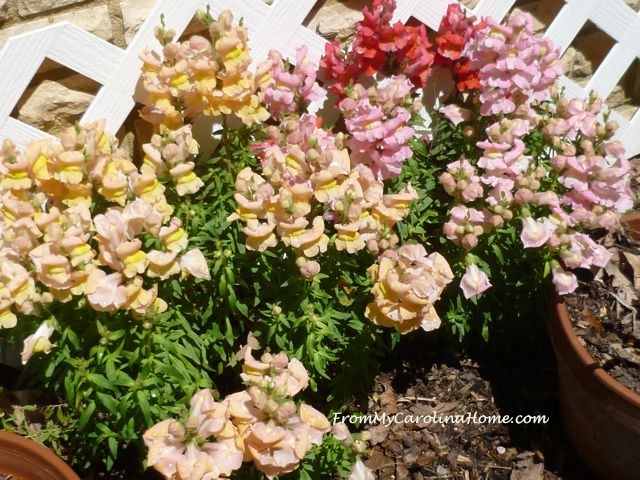 I am impressed with how well the dianthus is doing too. 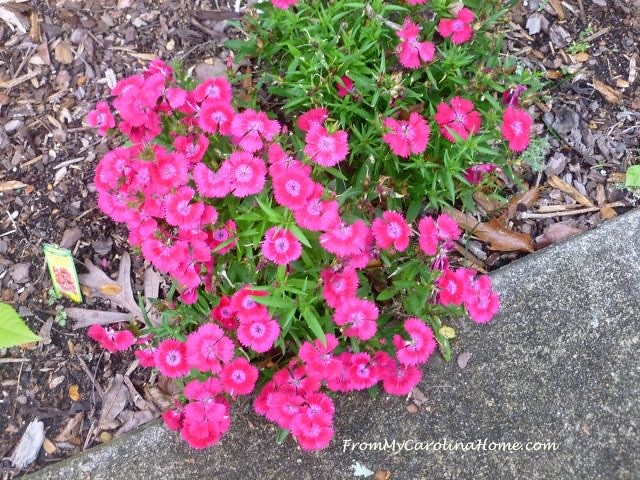 Believe it or not, I still have empty pots.  So, those will get seeds planted for more herbs.  I’ll let you know how it goes in a couple of weeks.

One more thing to show you, as I looked out on the veranda a few days ago, I saw our resident woodchuck on the veranda eating one of my plants!! Opening the sliding glass door sent him running to the other end of the veranda. He went behind my largest pot and stuck his head out. Of course I grabbed the camera then, the good one with the nice zoom lens. 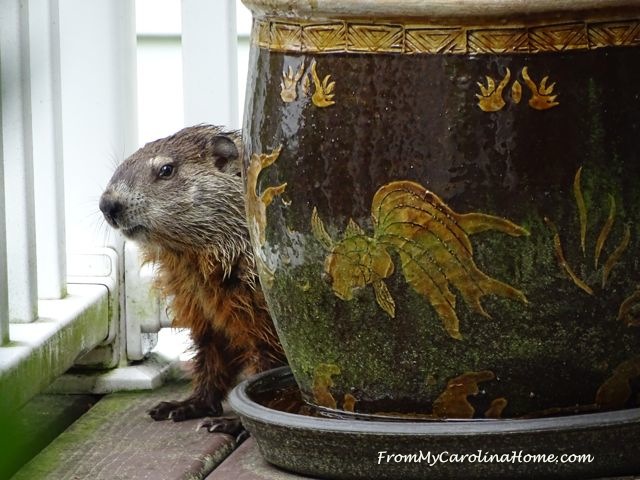 DH tried to get him to run off, but instead he went behind the grill to the right of the table in this picture, and climbed up onto the shelf under the cover. After DH wiggled the grill while trying to stand well away, the woodchuck circled back around the large pot and made a bee line for the steps. 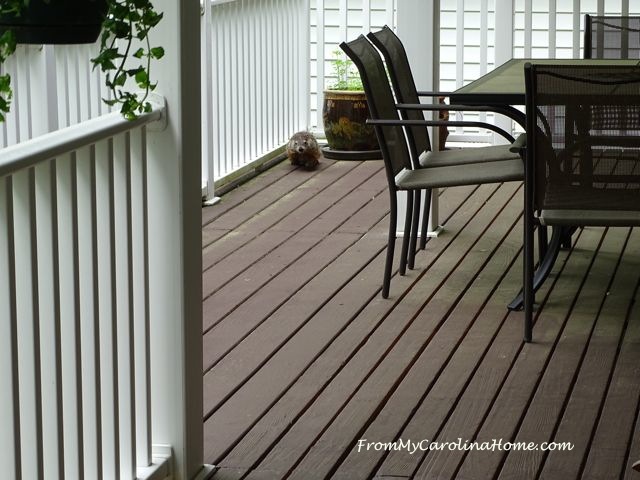 Then ran off, jumped off the retaining wall and kept going across the meadow and into the woods. By then he was going at top speed! I could only get one picture as he bolted away.  Little toot, he better stay out of my lettuce! 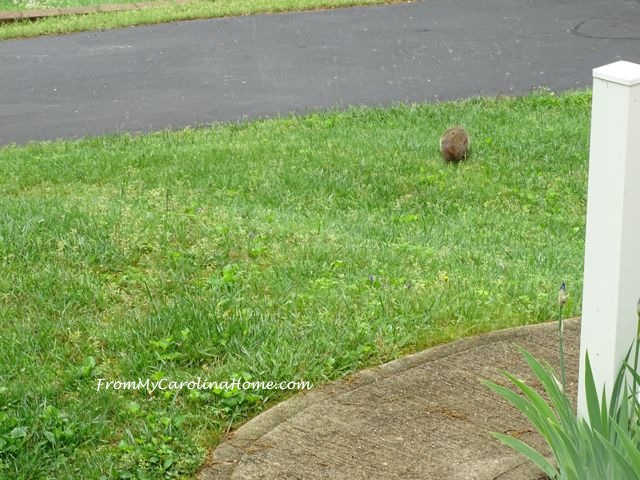 I have another garden post for tomorrow, a special one for a special day.  Then I have quilting to show, a new recipe, more tablescapes, and the mystery quilt continues soon.  Lots to come, not enough days in the week!

Have you planted in your garden yet?  Any critters visiting?

25 thoughts on “Early May in the Garden”