Today is National Iris Day, and I have been saving my odyssey to revive my purple iris flowers for today. I’ll show the progression of the beds, and give you some hopefully interesting Iris lore along the way.  Did you know that the Iris is named for the Greek goddess of the Rainbow?  She is called the Messenger of the Gods, and used the rainbow to move between heaven and earth.  The flower was named the Iris because they come in every color of the rainbow. 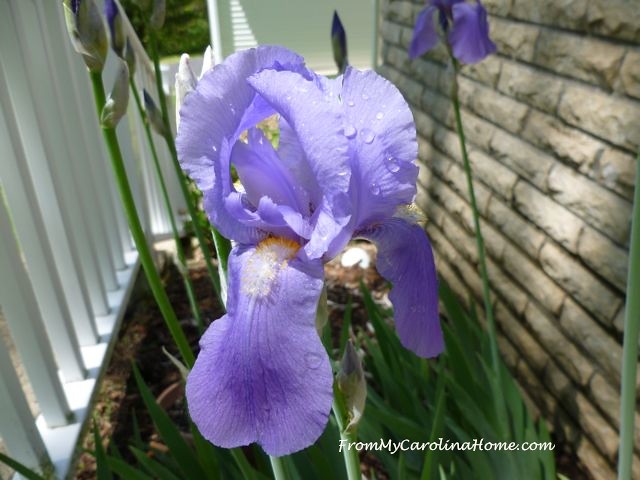 Last month I was lamenting how my iris bulbs would put out leaves but had not bloomed last year after I divided them in 2015.  I created two beds from one by dividing the tubers.  Their blooming had been getting more sparse each year.  But after dividing them, they refused to bloom at all last spring.  Only the untouched bed produced any blooms.  Time for some research, and I found several sites that predicted I had replanted them too deep.  I thought that couldn’t be the case, really, could it?  They weren’t planted that deep.  But one site had a Q&A section, and the answer to almost every question was ‘they are planted too deep’, and also said not to mulch them.  Well, I had mulched them so maybe the site was right.  They also desperately needed weeding. 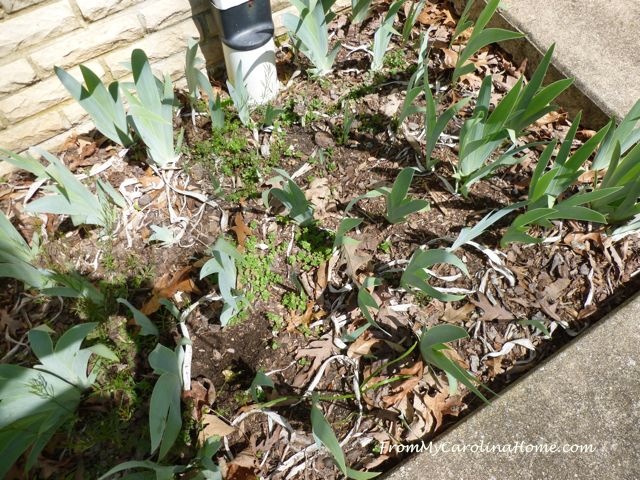 One fine day, I got out the kneeling pad and gloves, and reduced the level of soil over all the tubers.  The tubers need to only be barely covered, with a bit at the very base of the leaf shoot uncovered altogether.  OK, so I did that. 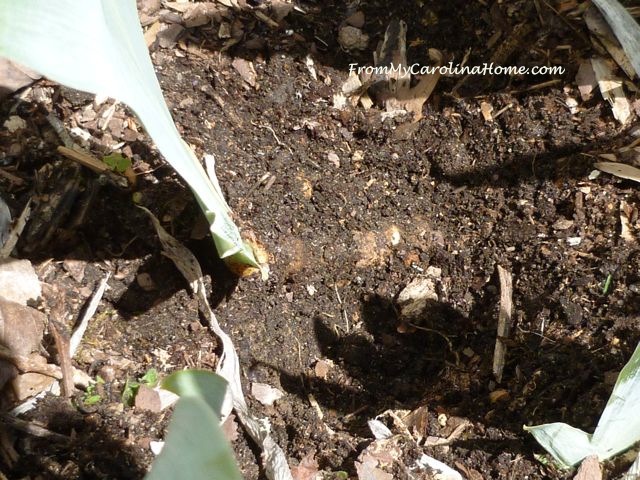 I know flowers need phosphorus to bloom, so while I was at it, I added a top dressing of bone meal to the soil.  Lucky for me, it began to rain the next day, so they got a very good soaking over several days. 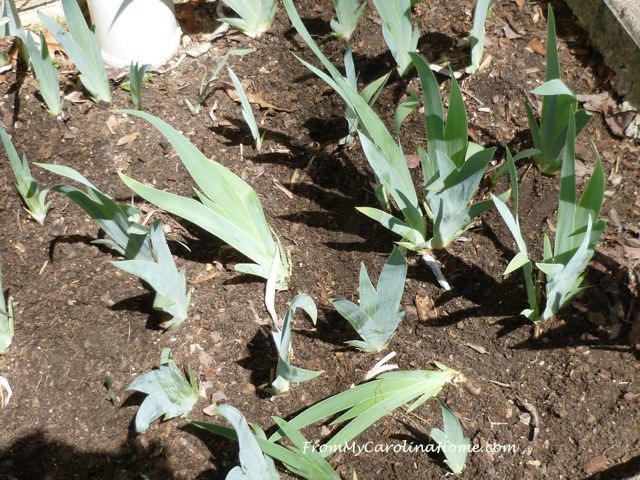 I have to say, the effect was almost immediate.  In just days, the tubers began to put up flower shoots.  They did so many I was afraid all the flowers would be done while we were in Myrtle Beach for a week.  Did you know that in Japan, the Iris flower is believed to ward off evil spirits?  People will put the blooms in their bath to prevent illness. 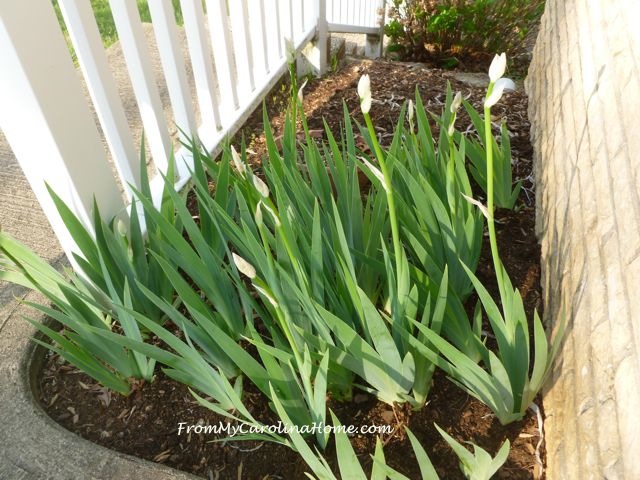 In a few more days, those beautiful purple buds were developing nicely.  In ancient Egypt, the flower with its three petals was the basis of their king’s sceptre signifying faith, wisdom and valor. 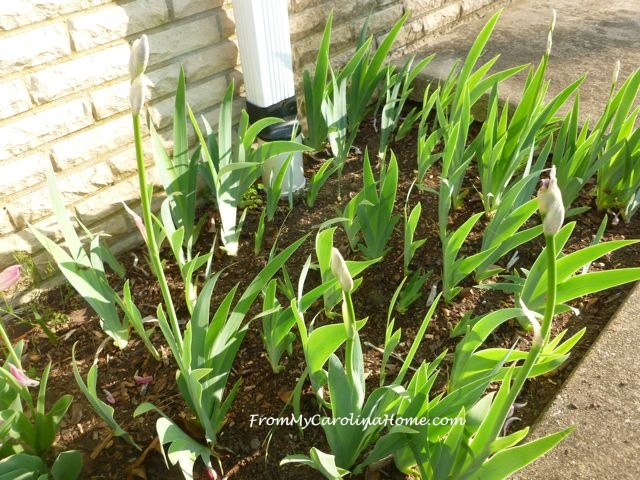 Then, about 2 weeks later, the bud are showing, and more are coming!  In Victorian flower language, sending a bouquet of iris blooms meant you were sending your compliments, or feelings of friendship, faith, hope and valor. The original bed is putting up multiple blooms on some spikes. 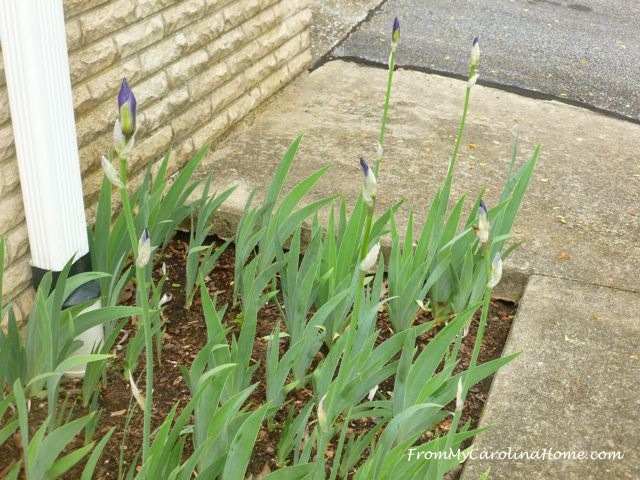 In France, the iris is the basis of their fleur-de-lis design, symbolizing royalty.  Also the second bed is coming along at the same rate. 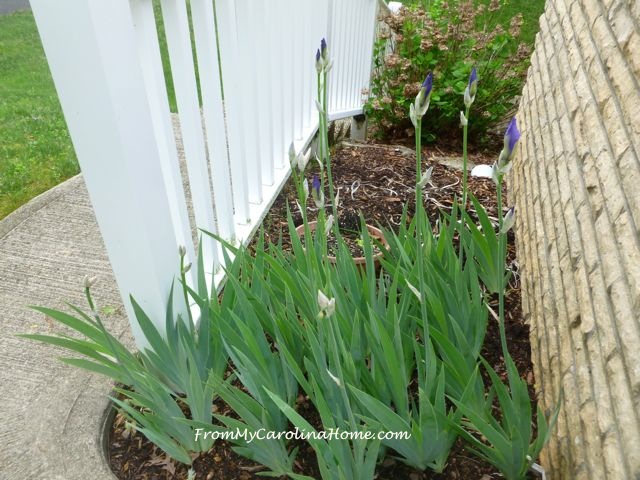 The purple iris is a symbol of royalty, respect, and wisdom.  The tubers put out even more buds while we were out of town.  I think the blooming season for them will last a couple of weeks at this rate.  When we got back, there were a few that had opened up, and even more buds developing. 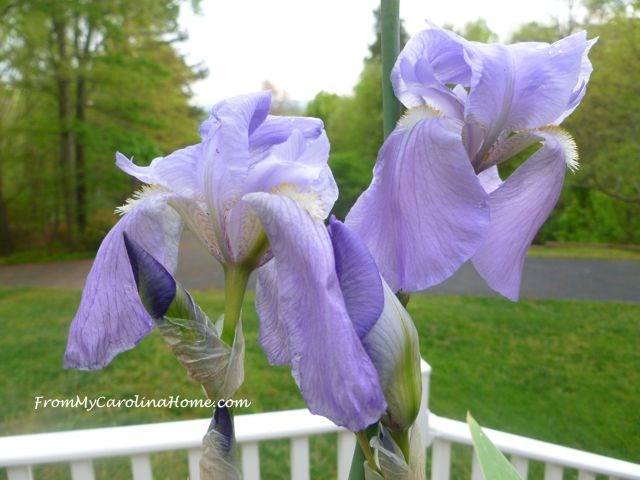 The root of the iris plant when dried is called orris root, and is used in herbal preparations and perfumes as a stabilizer.  Now, they are blooming their heads off, these in the upper planter are putting out multiple blooms per shoot.  Although I didn’t do anything to the tubers in this bed, I did give them a top dressing of bone meal for the phosphorus. 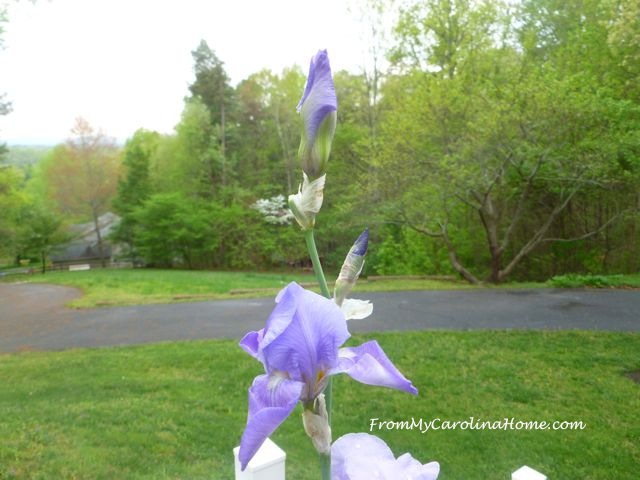 Both the reworked beds have the darker color blooms. 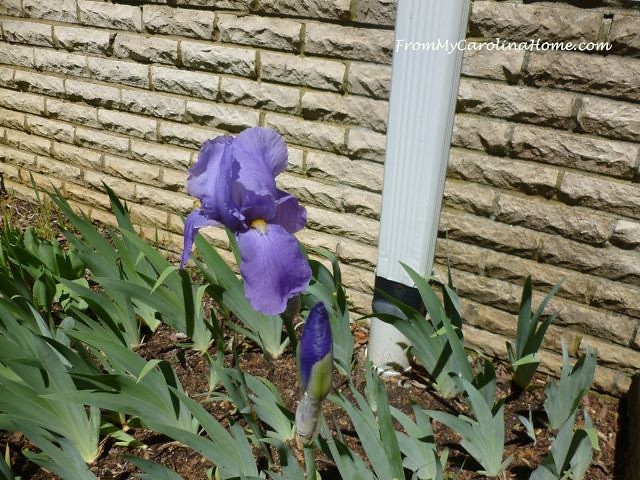 I am really happy that they have begun blooming again.  It is hard to believe the solution was so simple. 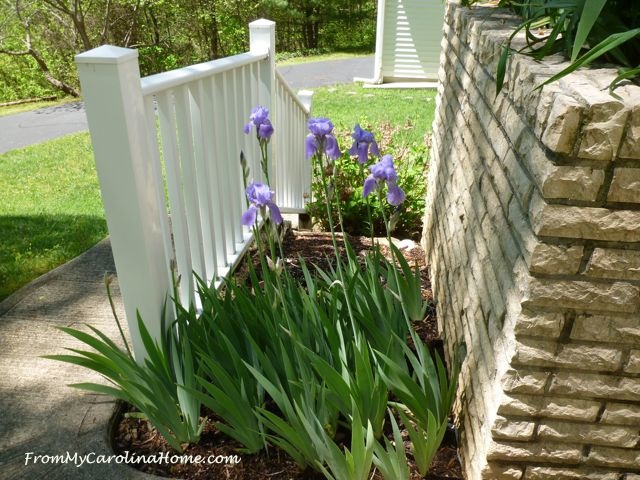 The lighter purples of the upper planter keep going too. 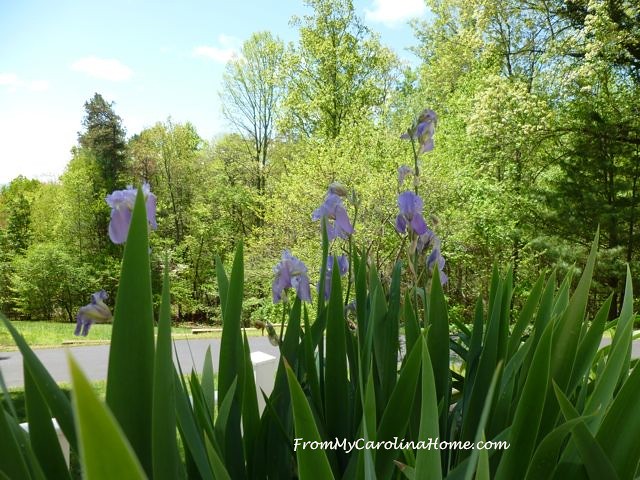 Those blooms just keep coming, going on more than a week now with more coming into flower every day.  Some of the flower spikes have five blooms on them! 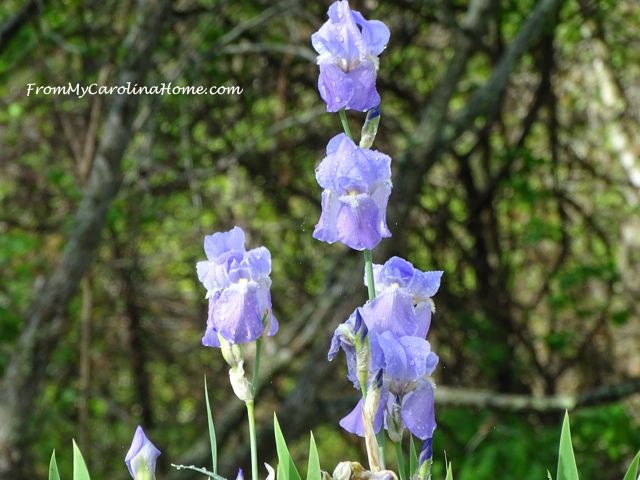 Did you know that only the upper petals are actual petals called standards?  The lower purple parts are septals called falls containing the reproductive parts of the flowers. 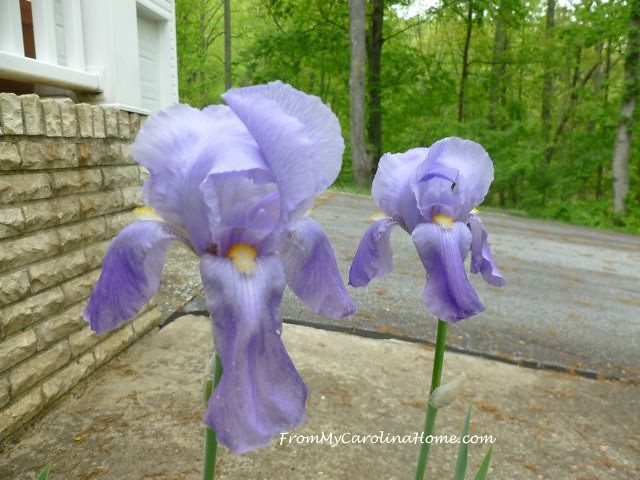 The blooms just keep coming now, these are few days later. The second bed is full now, quite a contrast from nothing to this with just a little care.  I don’t cut these flowers, preferring to enjoy them where they bloom. 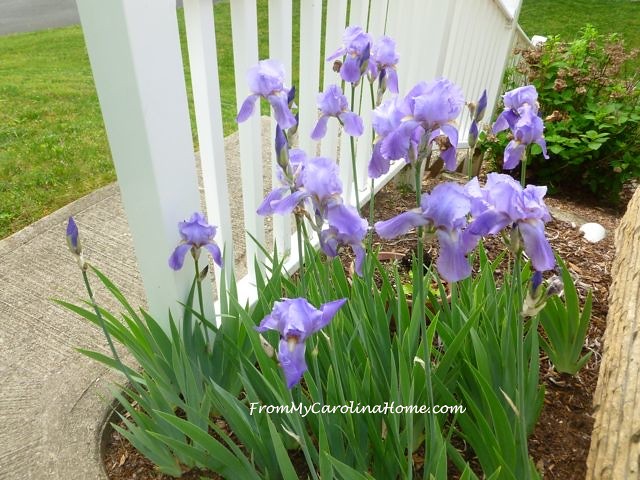 The original iris bed is getting full too, with all the green foliage on the mountainside as a backdrop.  A few blooms are spent, but more buds are showing as well.  I think this will go on for several more days, maybe even a week more! 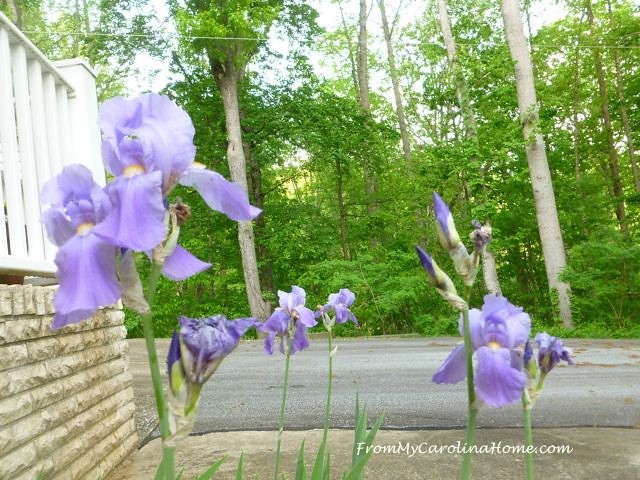 Do you have iris flowers?  What is blooming in your garden?

43 thoughts on “An Iris Adventure for National Iris Day”