Going through my kitchen, it is surprising to see how many Mason jars I have.  When I saw an article in an older magazine on collecting and dating jars, I had to dig mine out just to see what might be there.  As I have said before, I was the one in school getting gleeful when research papers were assigned while everyone else was groaning.  I just love looking things up and learning.  So, settle in for a lesson on Mason jars, and maybe you’ll find a treasure in your cabinet. 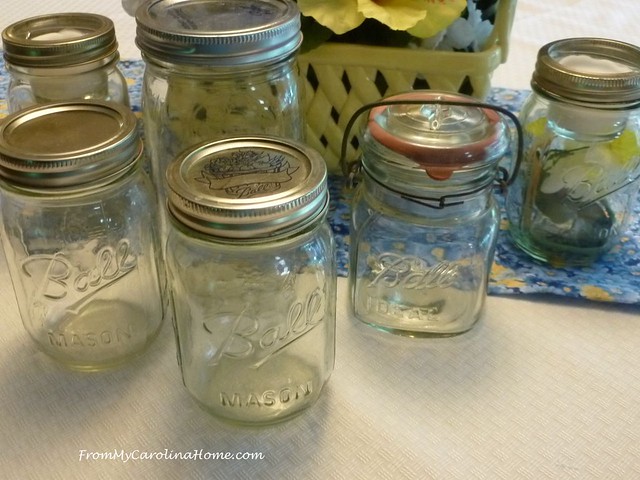 Did you know that Mason is not a manufacturer of glass jars, but the name of the man who invented the canning jar itself?  John Landis Mason patented the jar design with a screw on lid for home canning in 1858.  The rubber ring on the lid provided the seal.  For Ball jars, you can date them by looking at the logo, as it has changed many times.  I’ll give you a link for that later in the post.  These jars have the Ball name in script, with the center of the ‘B’ straight (not looped).  The top line extending above the ‘B’ is short.  The ‘a’ doesn’t have a leader on the left side, and there is a line under the name.  This points to this jar manufacture anytime after 1960.  Might be a few years old, but could be modern.  Nothing special. 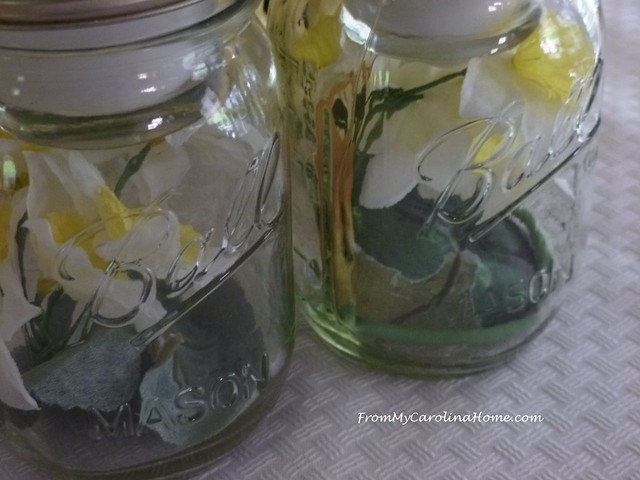 I was surprised to find that although Ball is the leader in the home canning industry, actually it was Alexander Kerr who revolutionized home canning.  He used a patented combination lid and seal invented by Julius Landsburger to create a flat lid in 1915 that fit the Mason jar.  It is more difficult to find information on Kerr jars.  An article at the Society for Historical Archaeology was the source for these notes.   In the early 1900s, the jars were marked “Kerr – Economy”, made up to the mid 1950s.  Later, Kerr made a different size mouth jar to fit the Mason jar seals in manufacture, and began using the terms “Self Sealing Mason” on their jars.  The lack of imprint on the bottom and the presence of mold lines leads me to believe that these jars are no older than 1980s.  By the 1990s, Kerr had diversified into many packaging areas, and their glass jar manufacture was losing money.  It is interesting to note that the Ball Corporation purchased the Kerr glass manufacturing plants 1992, and immediately shut down two of them. 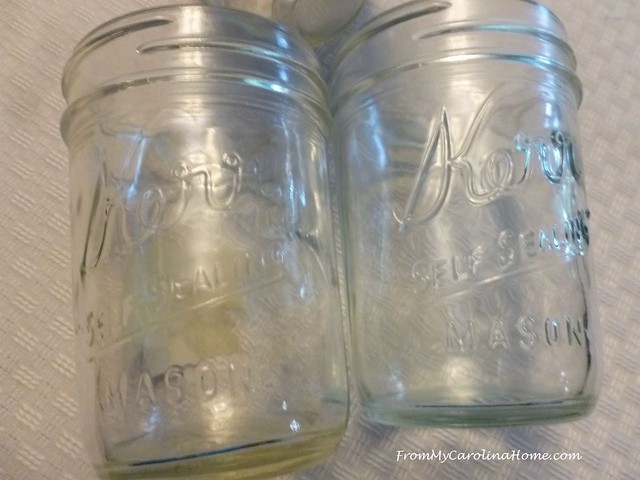 I found several Atlas jars, and thought they might be special, until I ran across an article that they were currently manufacturing glass jars for tomato sauce.  Sure enough, I had one in the pantry.  So those could go to the recycle center and give me a bit more room on the shelf. 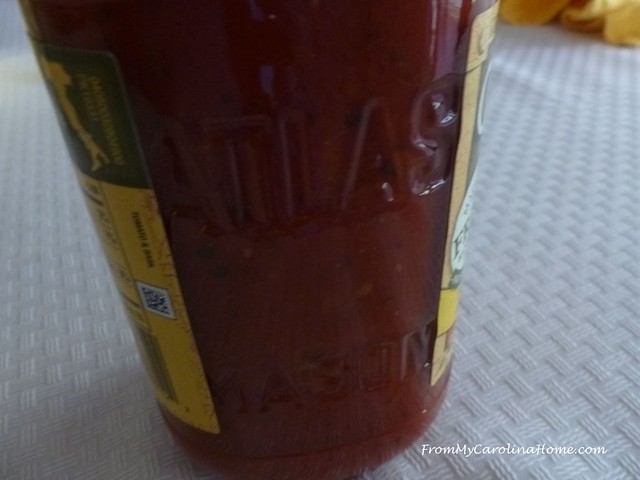 I have several Golden Harvest jars, and love the embossed designs. 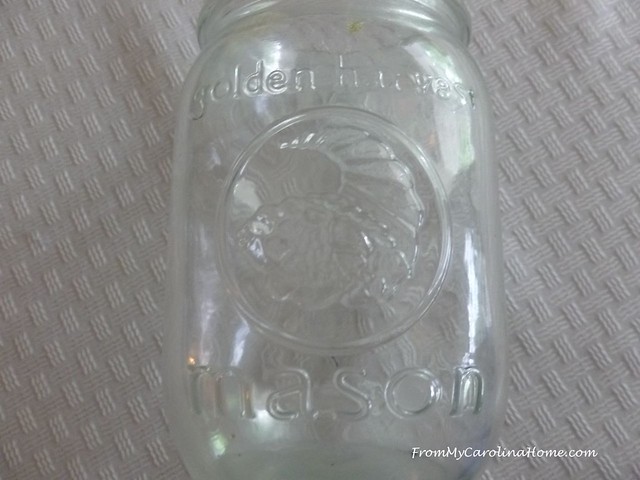 These are a bit larger than Ball or Kerr jars as they are made in metric sizes.  This means that fewer will fit into a canning pot, but each one holds a bit more. 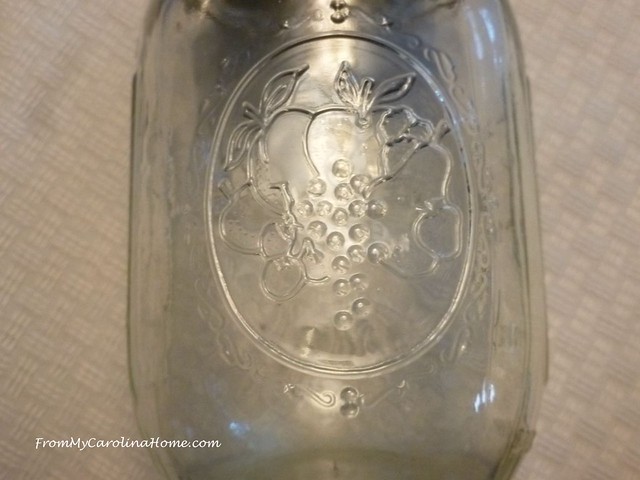 In my research, I found that these lovely fruit embossed jars were made by the Golden Harvest company as well.  This one has strawberries on one side… 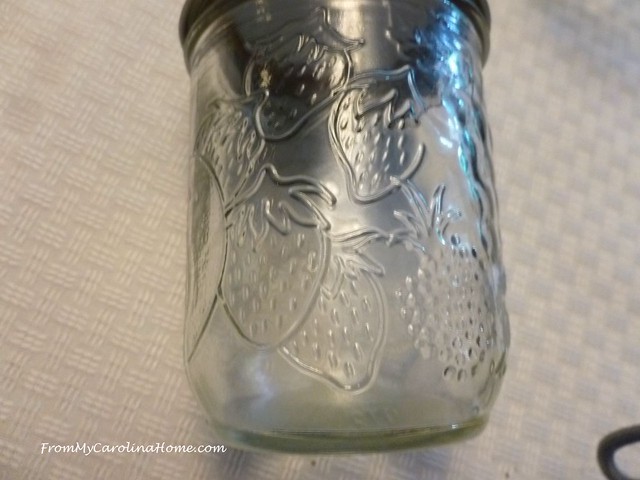 and a pear, peach and apple on the other. 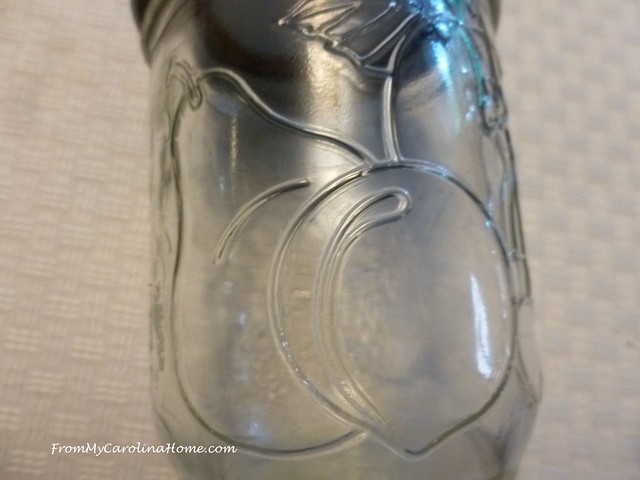 Just for fun, here are a few of the ways I use Mason and glass jars.  I have no idea who made this wonderful locking lid jar with embossed fruit, but I like it.  One side has grapes and cherries. 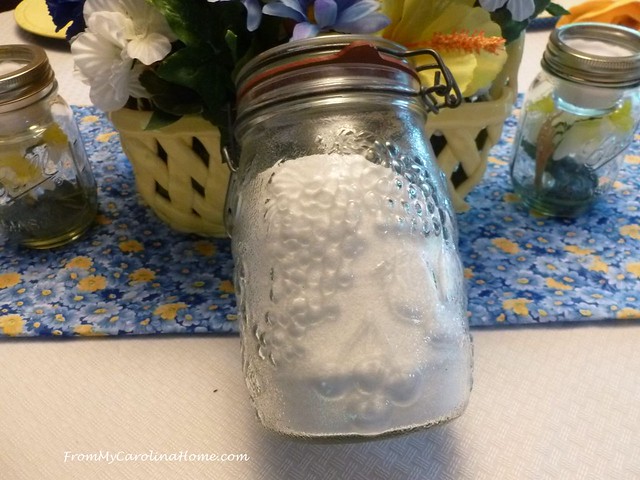 On the other side are more cherries, pears, strawberries and an apple. I use it to store sugar. 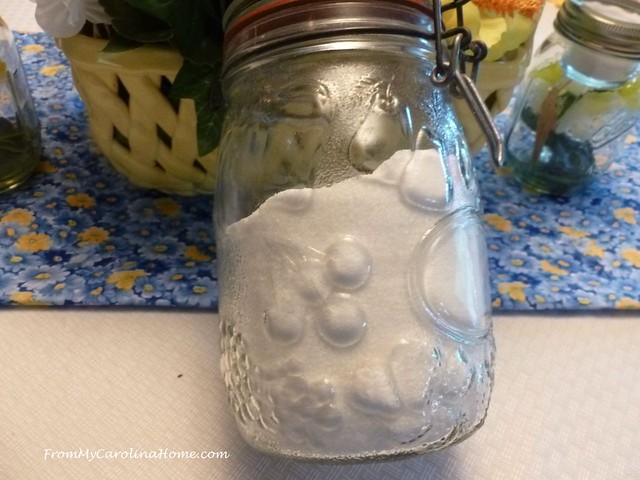 I made Mason Jar Candle holders with interchangeable fills. 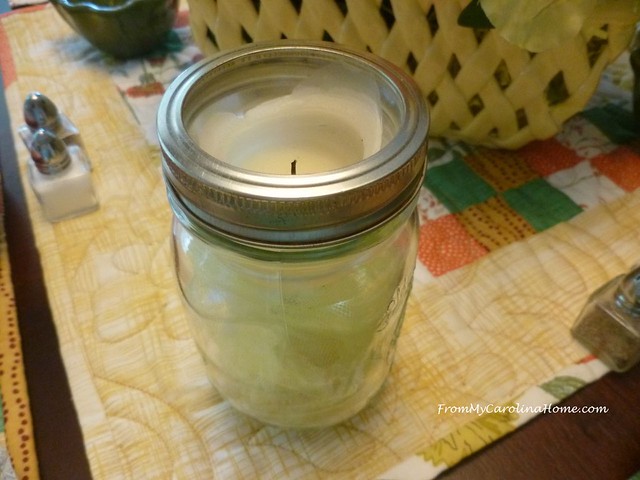 These are used on tablescapes often, here with yellow and white flowers in the base. 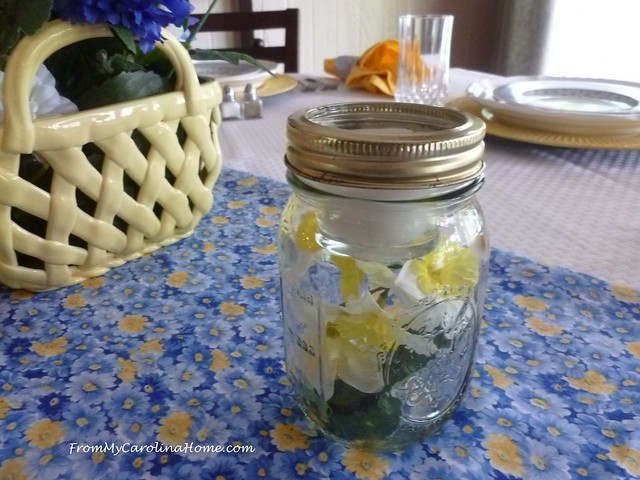 Outside, the top candle could hold a citronella votive. 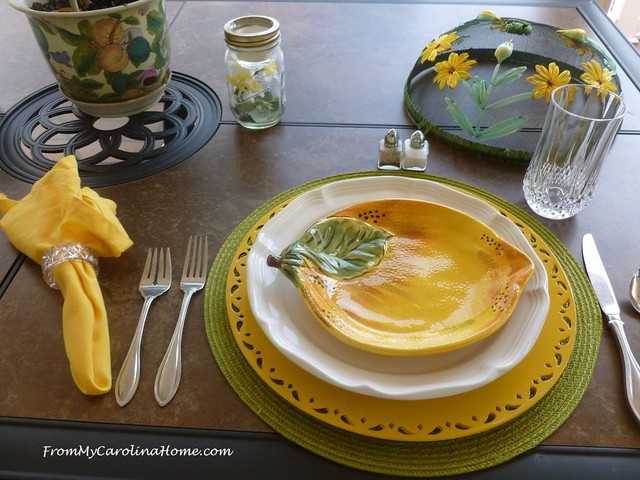 Filling the base of one with red flowers, and using another for live hydrangea cuttings made a nice addition to a patriotic tablescape. 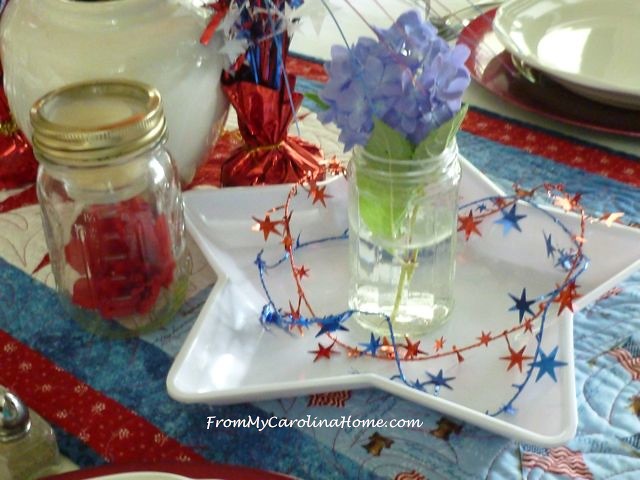 Then I got my glue gun out, and with a larger jar created a Beaded Mason Jar Decoration. 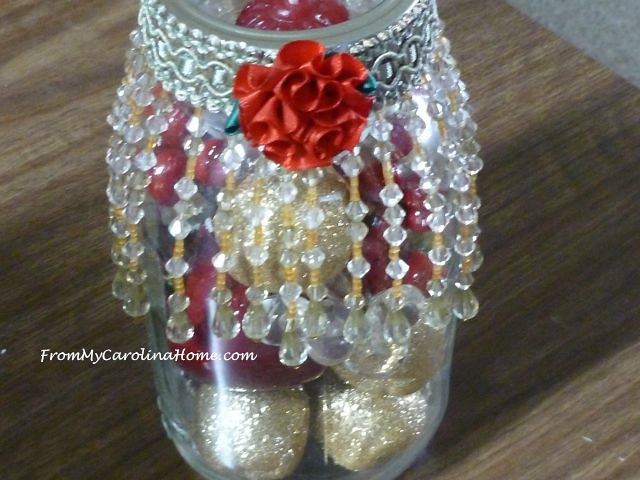 I use them to keep asparagus in the refrigerator too, treating them just like flowers keeps them fresh longer.  This way I can cook just half of a bundle at a time for two meals, both made fresh and a few days apart. 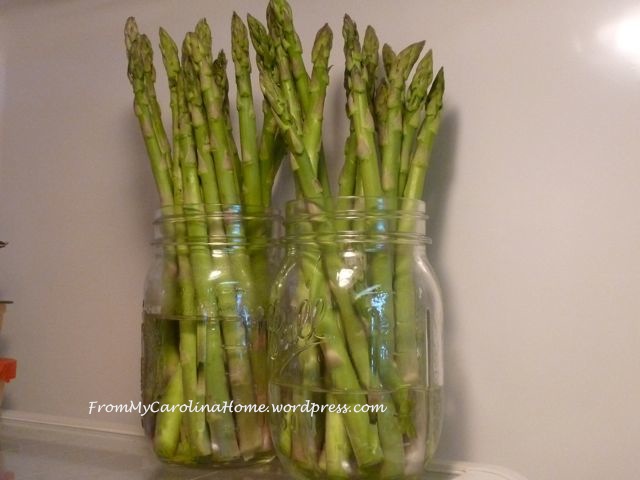 Looking at the Ball logos closely, I did find that I have a treasure. 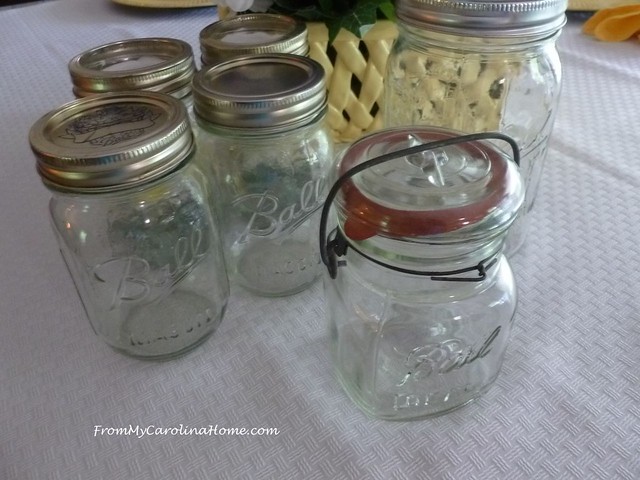 This one is an antique Ball Jar with a locking lid that I use for storing dried or roasted tomatoes.  It is called a lightening jar.  The two piece wire bale holds a glass lid with a gasket between the jar and the lid.  The gasket has likely been replaced as it doesn’t fit exactly.  The word Ideal was used from 1915 to 1962. The looped B and no line underneath further narrow the date to the decade of 1923 to 1933. 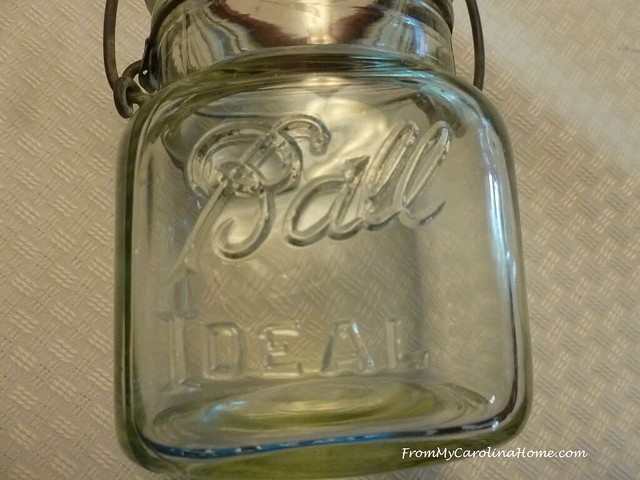 See this wonderful article on collecting and dating Ball Jars published by Country Living.  There is a chart showing all the logos for Ball, along with dates.  The photography is really wonderful on this article, and you may have a valuable treasure in your closet and not know it! 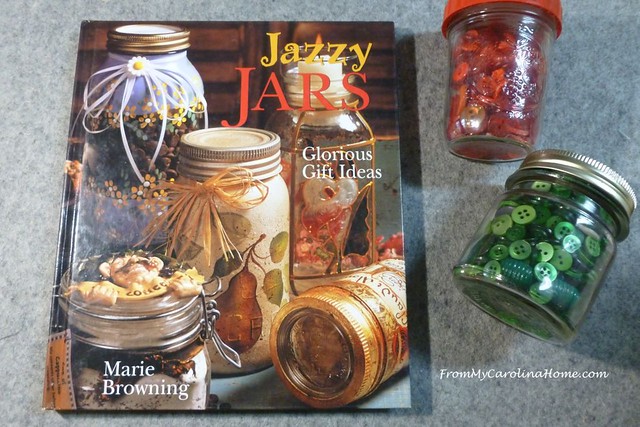 In the sewing room, I have buttons in jars.  If you are looking for a few fun books on jars, I am planning to make a couple of the projects in this book – Jazzy Jars: Glorious Gift Ideas.  There may be one or two suitable for Autumn Jubilee.  Yes, I am starting to think about that.  See more ideas for Mason Jar Crafts, including fairy lights for them on Amazon.

Do you have some Mason jars at home?  What do you use them for?

31 thoughts on “Having Fun with Mason Jars”