Since my block design motivation is taking a hiatus, I got out my dahlia panel in soft pastels, the Hoffman Dream Big Opal that I promised to show you.  I want to do this one for me.  It will be a practice piece for another one in the Sunset colorway to quilt for a Silent Auction.  Is it just as daunting to you to face one of these panels?  I’ve done one other, the Leaves panel in a previous post (Fear of Free Motion), and it seemed easier to follow the vein lines already in the printed panel.  This one doesn’t have those. 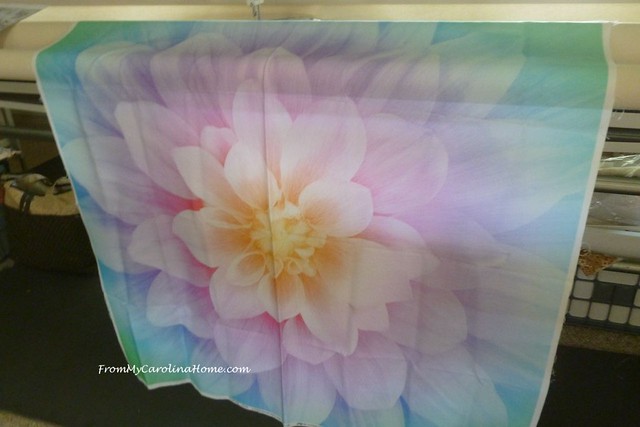 One regret I had from the leaves panel was not doing it in multiple thread colors.  I have a variety of cotton threads in lots of colors, so set those out to audition. 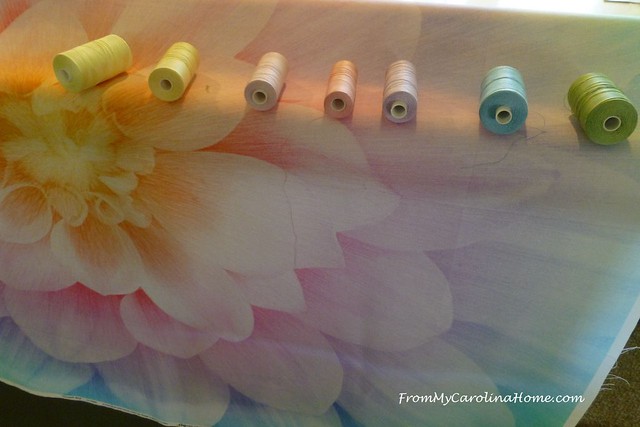 Finding that many color changes to be a bit more than I wanted to do, I narrowed the list to four – yellow, pink, purple and blue.  It is loaded with Hobbs 80/20 batting. 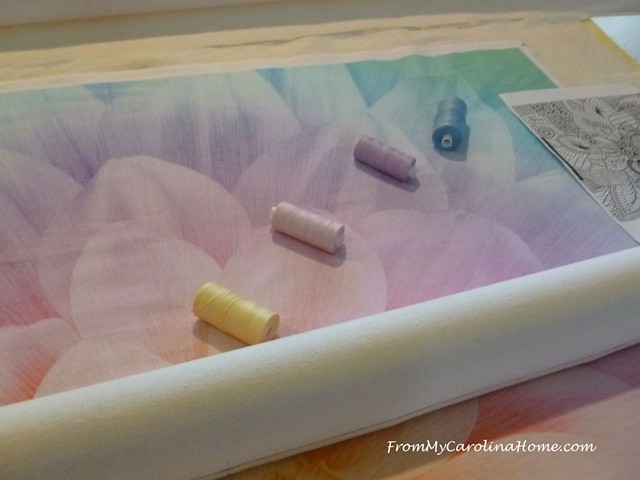 Then I spent several sessions over the next few days taking time to simply move the machine with it turned off.  I imagined doing feathers, and moved the machine to simulate sewing them.  I imagined ribbon candy, and elongated ‘S’ shapes, and some other fills, but quickly ran out of ideas.  So I just practiced what I could think of. 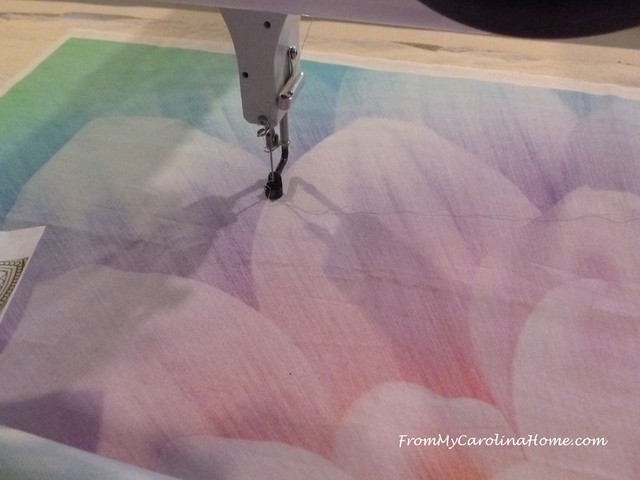 It was apparent that I needed a plan.  A friend sent me a fill diagram but it was much too complicated for my level of skill.  So, I took an image of the panel in greyscale, made a worksheet, and printed it out.  I used the sheet to outline the petals first. 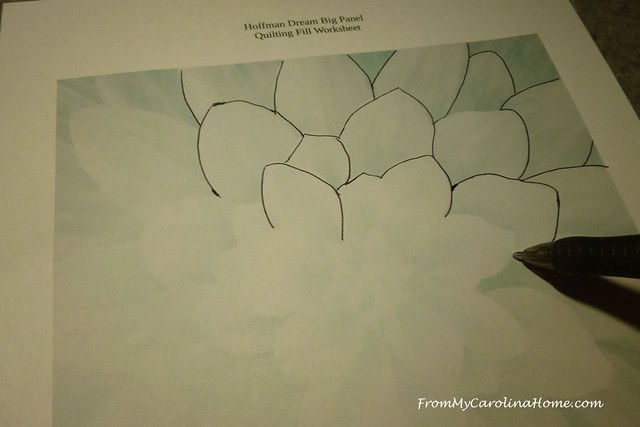 Then I put it in a clear sheet protector to draw fills with a dry erase marker.  This didn’t work, as the tip was too big. 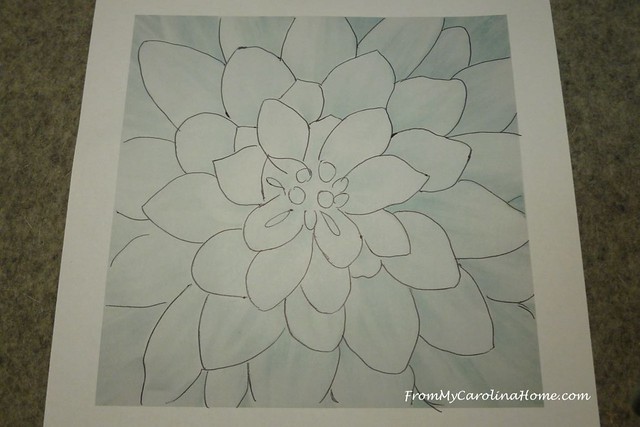 So, I made photocopies. 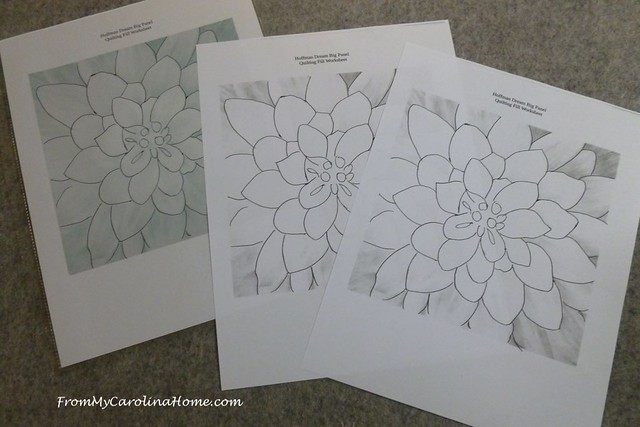 Then I went down a rabbit hole at Pinterest.  If you need fill ideas, there are a lot!

Taking a pencil, I began to doodle. 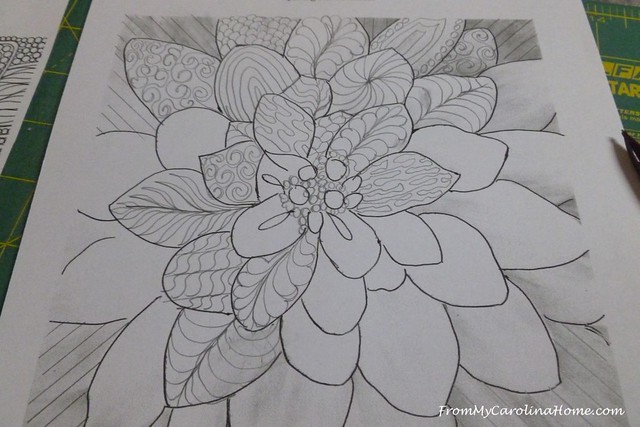 Going back and forth from Pinterest to pencil, eventually I got my plan filled in.  It was easier once I realized that not each and every petal had to be different from all the others.  There could be two or three with the same fill.  I’ve made my worksheet into a pdf download so you can have it to play with – Dream Big Fill Worksheet. 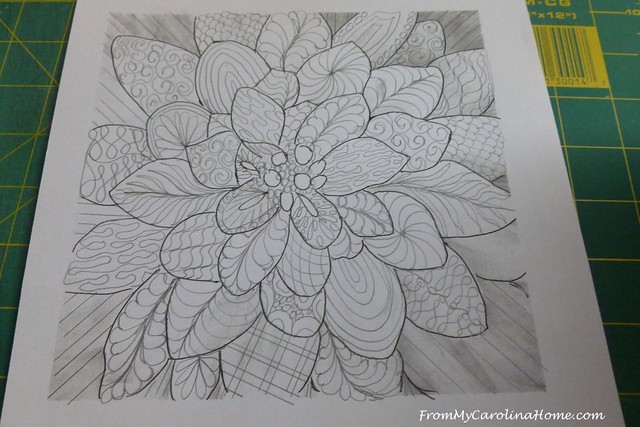 The backing is a yellow print, and I didn’t want all those color changes on the back, so the bobbin is loaded with a pale yellow Bottom Line.  The stitches look perfect here. 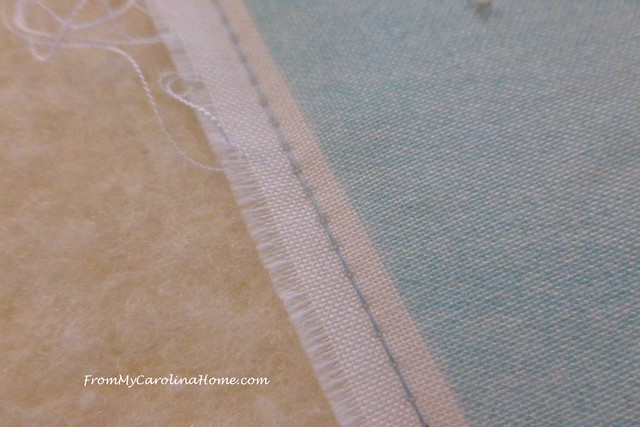 Beginning with the blue, I began by outlining the outermost petals, and filling in the background with lines to simulate rays.  Parts went pretty well with the ruler. 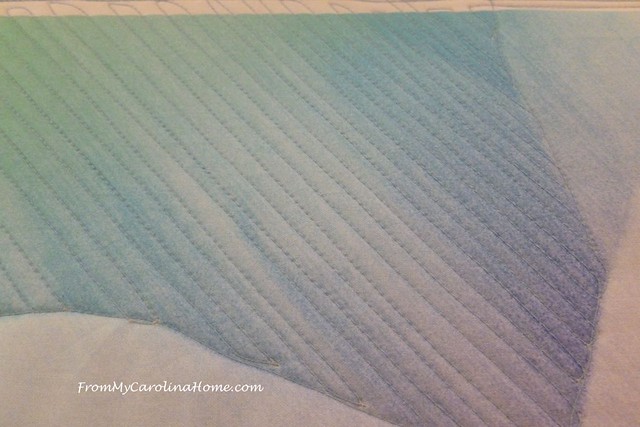 The other side got a bit wonky, with the lines not straight in some places.  This was due to having to hold the ruler at an awkward angle. 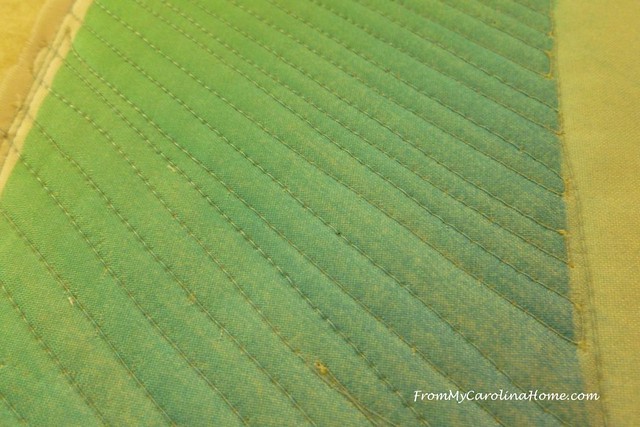 The outer petal on the right side was next, and I had planned rows of ‘S’ shapes for it. 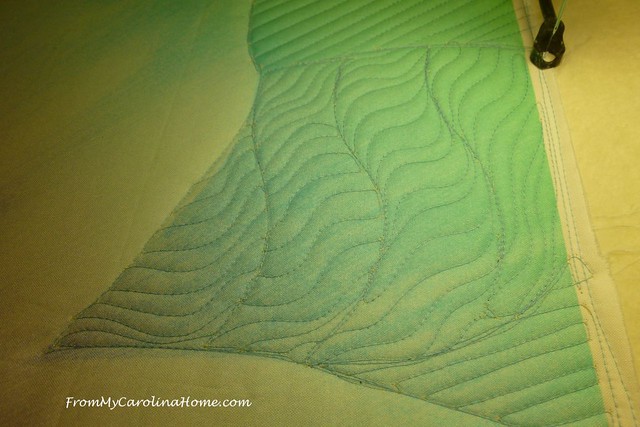 Next I looked at my plan, and found alternating loops on the plan. 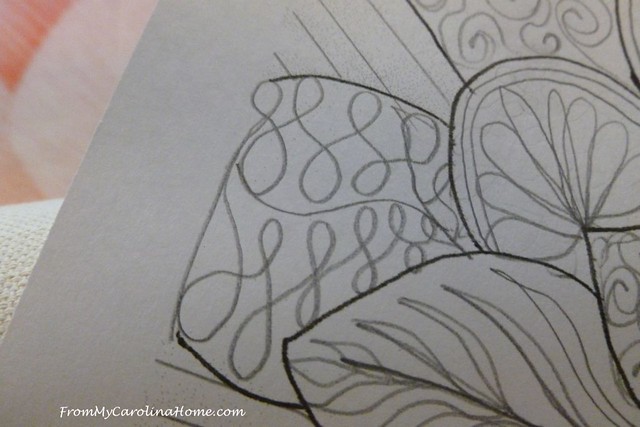 Somehow, though, I didn’t do two rows, just one.  It wasn’t exactly the shape of the plan either. 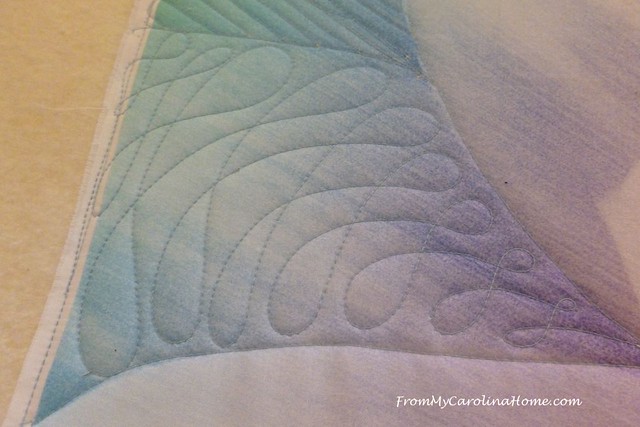 I realized that the photo is upside down to the way I loaded the panel.  Not really a problem, I just needed to make a couple of changes to the fill plan in the next row.  I did a bit more in the blue and then changed colors.  The purple petals were started.  More on this later, as I work through the designs.  It is a lot less daunting when you have a plan! This breaks that huge panel into very manageable bits.  All I have to do is look at the next petal, and stitch that fill design. 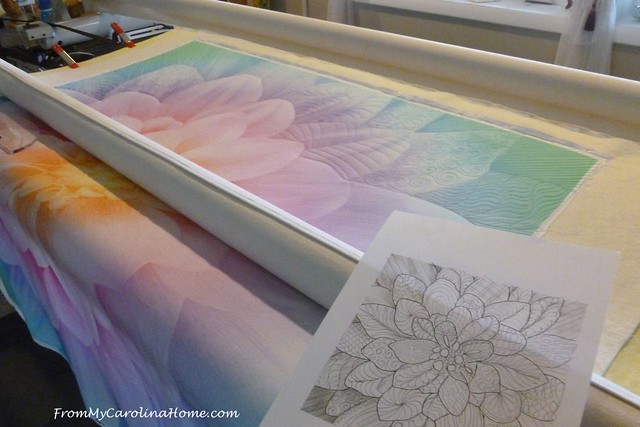 At this point, I began having some trouble with the stitch quality, and the machine doing funny things.  Two days of troubleshooting plus over an hour on the phone with the tech guy, and I have a new bobbin case on the way.  With luck that will solve the issues and I’ll be back quilting again soon.

Recently I commented on another blog that a lot of bloggers, including me, are lamenting the loss of our quilting mojo. I think it is the lack of interactions with other quilters in person, the show and tell at meetings, and the quilt shows canceled that are all contributing. We just don’t have the inspiration that we are used to, so online blogs and social networks become our source for motivation.  With that in mind, come post what you are working on in our Friends of From My Carolina Home facebook group.  And mark your calendar for the Christmas in July Pattern Parade Blog Hop for July 15th.  Plan out some sewing time and dig out your Christmas prints, we are going to inspire you!

Congratulations to Georgia Kirby and Sam VanSant who both won copies of the giveaway book from Sunday’s post, Girl Who Chased the Moon by Sarah Addison Allen.

See part 2 of this quilt – Quilting the Dahlia Panel Part 2.

See all the colorways for Hoffman Dream Big panels on Fat Quarter Shop.

What did you sew this week?