This idea of a cute, painted watering can has been circulating around the internet for a while now, and I wanted to do something like it for my garden.  It was one of those projects that was planned quickly, but went low on the project list as other projects with deadlines took priority.  Then with the heat and humidity of the early summer this year, I just couldn’t find the optimum time to do it until recently. 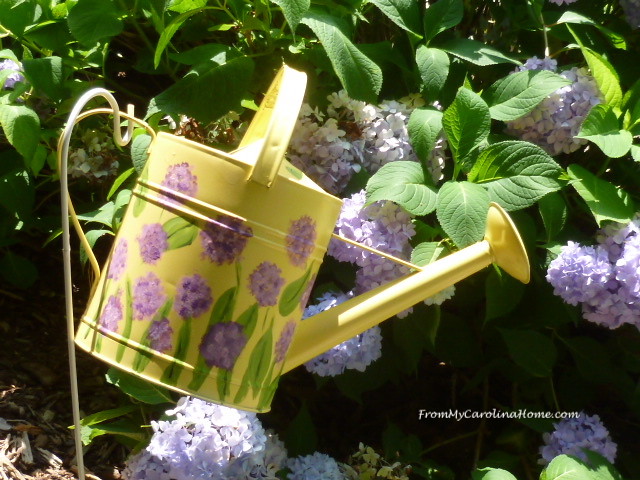 Some time ago I picked up this watering can at a thrift shop, and used it to plant an annual flower in it last year, but the flowers didn’t grow well in it.  The one thing I did not like about it was the engraved sentiment on the side. It also had some rust around the handle., but the metal was still in pretty good shape otherwise.  So, I cleaned it out and scrubbed it to remove all the dirt and as much rust as I could.  Using a primer first made sense, to fill in the engraved area and stop further rust. 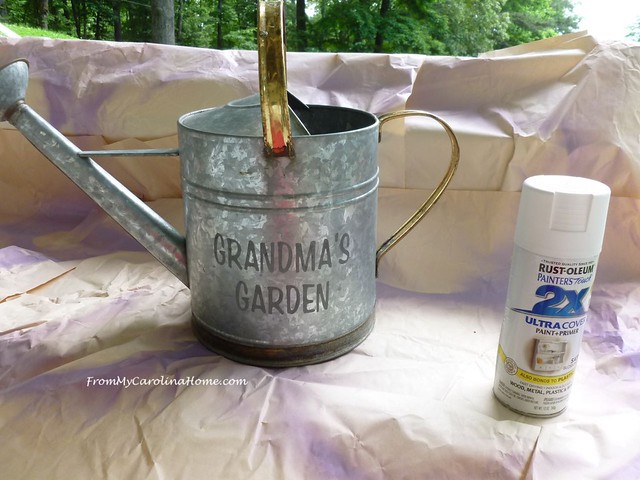 I used two coats of primer, turning the bucket around several times to get nice even coverage.  Only the outside was painted, the inside was left mostly natural, except for a light overspray at the top. 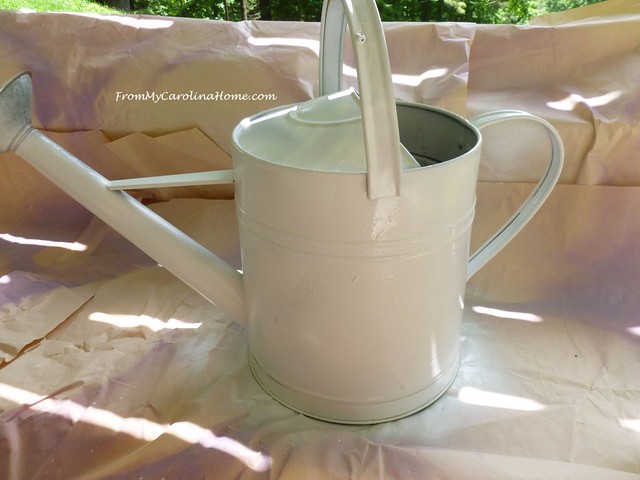 Then I painted it yellow, using several light coats of spray paint, and turning it between coats.  It was allowed to dry for an hour between coats. 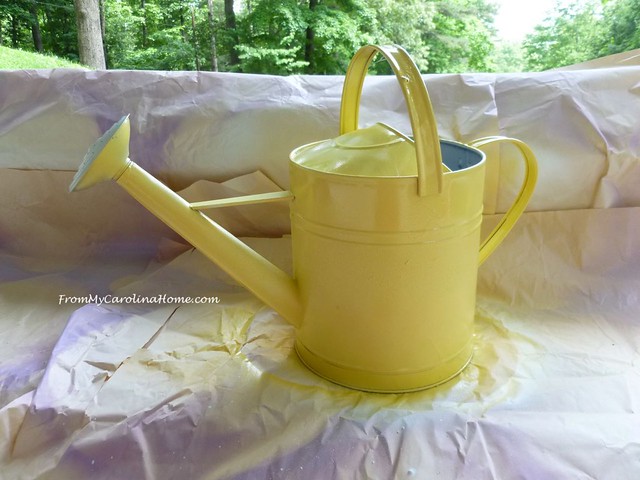 After a couple of days to thoroughly dry, it was put on my workbench to decorate.  I selected some colors from my extensive collection of acrylic paints for flowers and leaves. 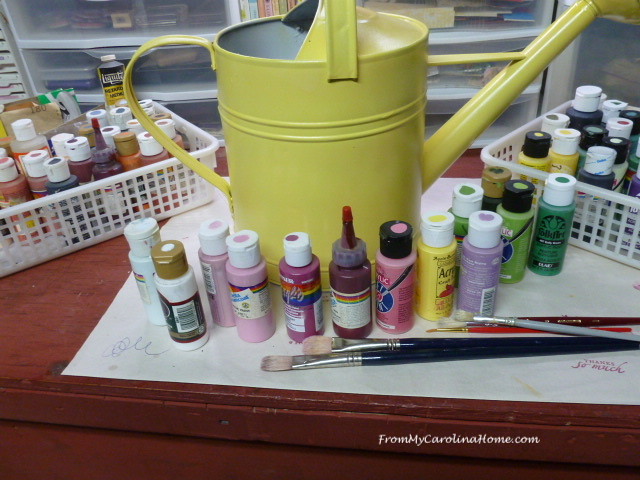 I have a book, The Big Book of Decorative Painting, that I have been studying a bit to try to do more painting. It is the how-to book for the clueless with little natural talent, LOL!! 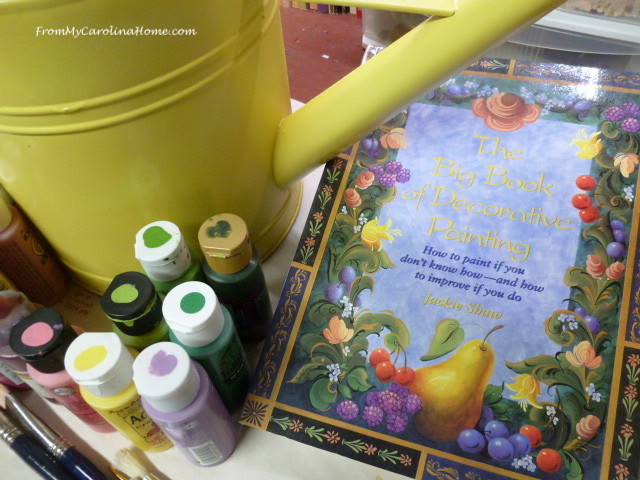 Following the principles of putting layers of color on top of color, and double loading colors, I pour some acrylic paint on a palette in two tones of green for leaves. 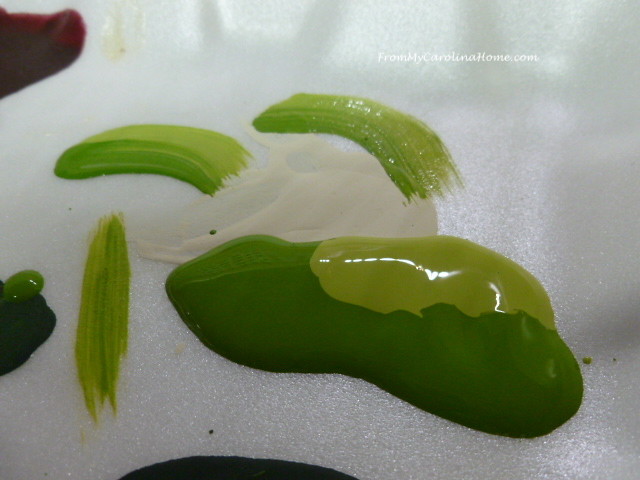 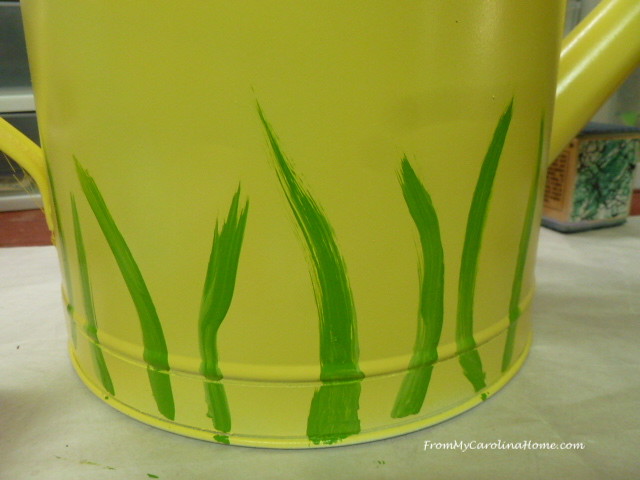 I had the idea that I might do some irises, but that was quickly abandoned as my practice ones on paper were awful. So, I went with hydrangeas, as those could be suggested with just pounced dots. I made the leaves bigger too. They are not really shaped exactly like hydrangea leaves, but who cares? 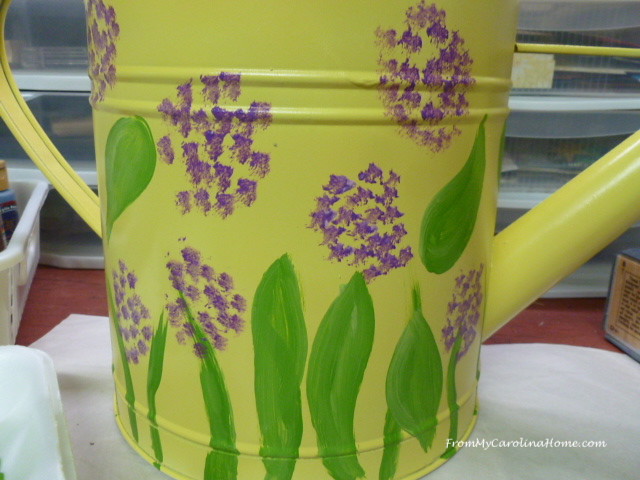 I added more pouncing to the flowers in a lighter tone, and more variation in the greens of the leaves.  I did quite a bit more after this photo too, all around the can. 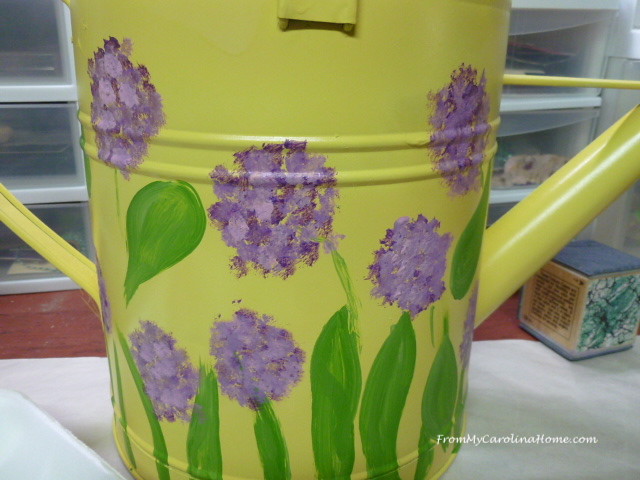 This side looked the best at the end.  I added a coat of clear varnish to protect the painted flowers and leaves.  Then, placed it in the garden. 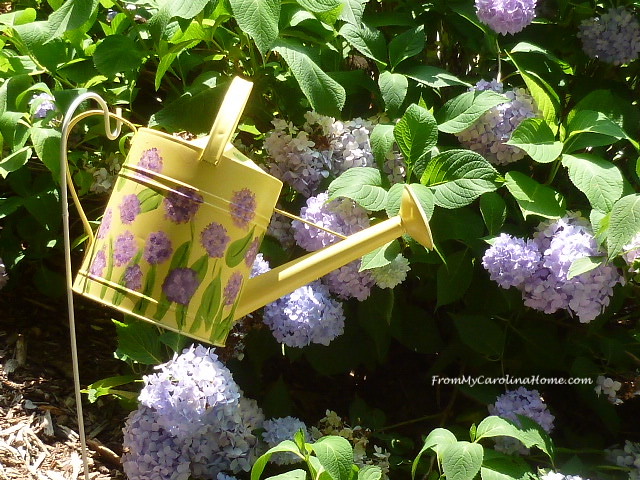 I hung it from a little shepard’s hook beside the abundantly blooming hydrangea so I can see it from my sewing room. 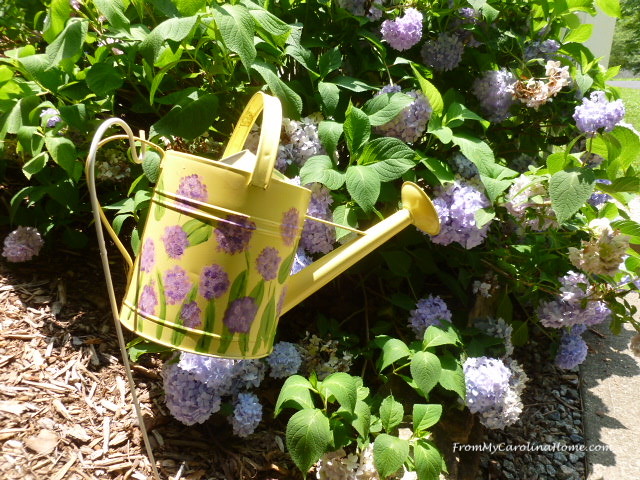 So, another garden art project done for summer.  I had a fun time painting, even though I am not really that good at it.  I will do some more painting projects soon.  I have several more ideas for other items ready for decorating that are stored in the craft closet.

Are you doing any crafting or garden projects?

Fat Quarter Shop has 20% Off Moda Grunge, June’s Basic of the Month, and 30% Off Dritz, the Notion of the Month, plus check out the Daily Flash Sale – something new at clearance pricing every day!

Feel free to pin this photo!