Our sewing day for Quilts of Valor was a fun day of hard work by a small group of very motivated sewing enthusiasts.  We set up the night before, with the door prizes displayed, refreshment table set with nice decorations, patriotic quilts on the walls, wool batting sample gifts for participants set out, and information on our local Quilts of Valor group in case new friends wished to join.  I want to thank my wonderful husband for all his help.  He carried the heavy stuff, helped volunteers with their things, kept us on track with the hourly door prizes, took pictures, helped register participants, pinned up quilts both inside and outside, and did a lot of the cleanup. 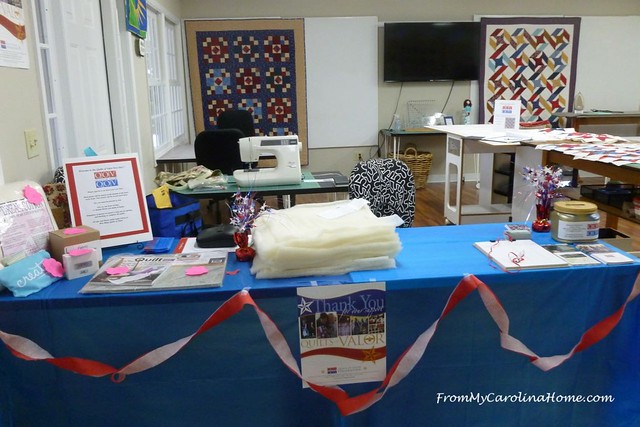 We begin gathering early at Beginnings Quilt Shop in Hendersonville, NC for donuts and coffee, hot chocolate, or hot tea to start the day.  We had snacks and bottled water for the afternoon too, enough to feed far more people than we had. 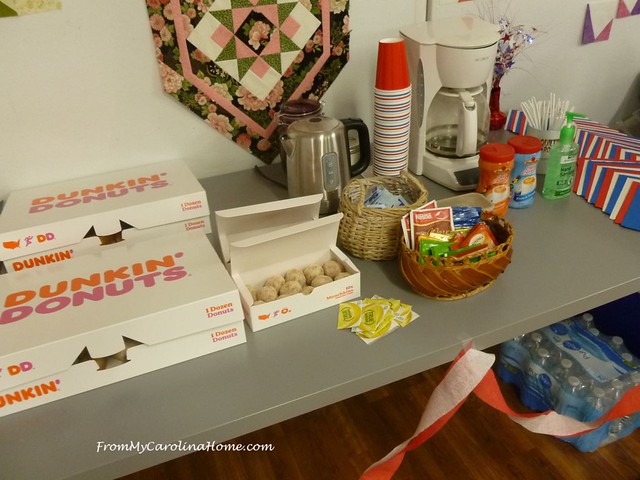 Quilts of Valor were hung outside the shop to greet our volunteers.  It was so much fun to sew with both long time buddies and new friends. 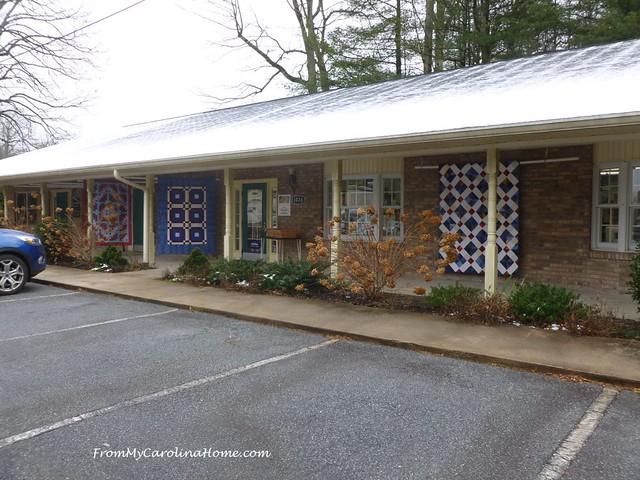 Beginnings set up a patriotic display at the front of the store, and had a special sale on all their red, white and blue fabrics that day, along with specials on charm packs, layer cakes and fat quarter rolls. 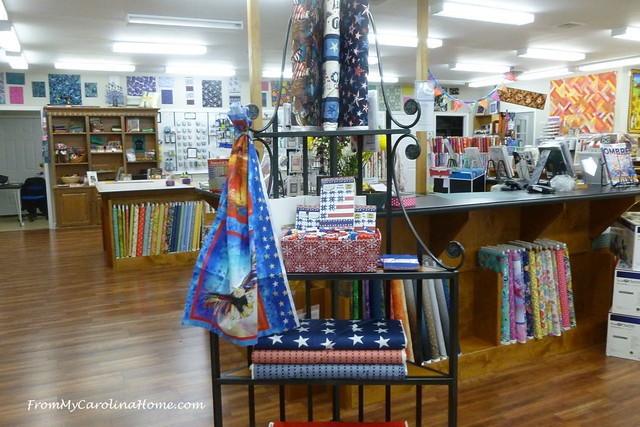 In the classroom, Bridget O’Malley and Charlene Greenfield got to work in the “Nine Patch Sweat Shop”, as we laughingly called it.  We needed 810 squares cut, and they gave the rotary cutters a workout. 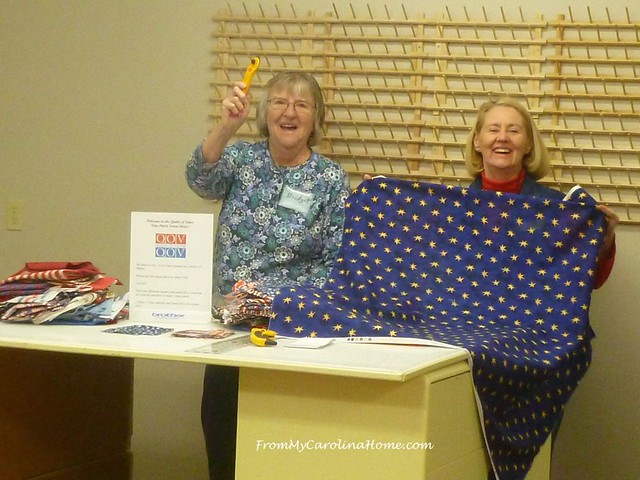 Stations were switched so others could do some cutting as volunteers got tired of standing. 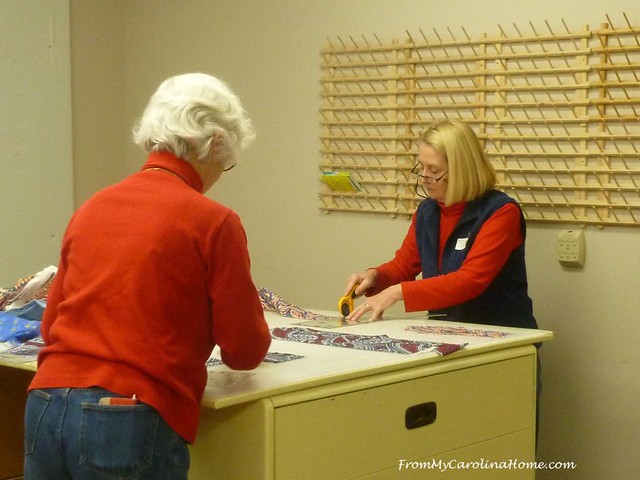 I looked outside and realized that the first three cars to arrive were red, white and blue!  What fun for our color scheme for the day.  You can see the remnants of the Friday snowfall on the roof and in the bushes.  But by Saturday, the streets were clear, even if it was still cold. 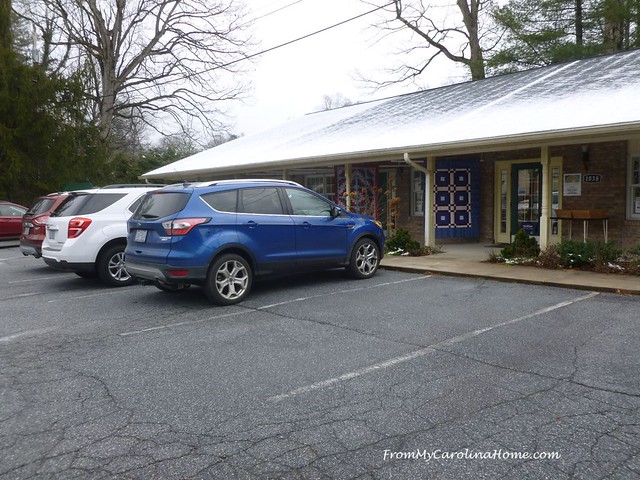 Back inside, Beginnings Quilt Shop co-owner Kathy Neal pitched in to make some nine patch blocks too. 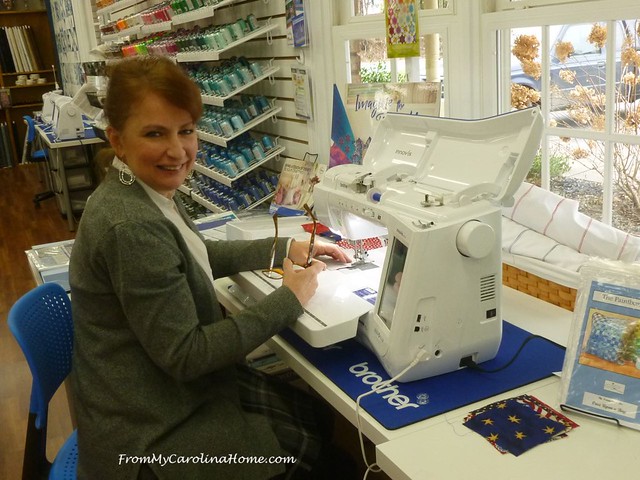 In the adjoining classroom, we set up Layout Central.  All the star blocks came from readers.  We mixed them up, so the same blocks were spread over several quilt tops for variety.  Stars were placed on the design walls, and then moved around to a pleasing arrangement.  As the nine patches came over, we added them to the wall. 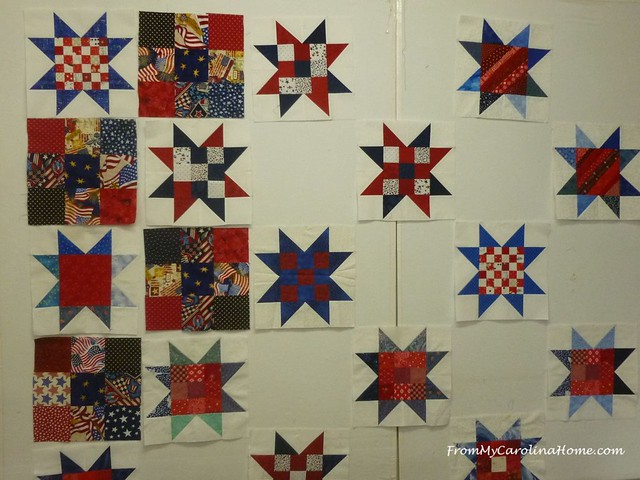 Meanwhile, Lori Skinner and Sally Matheiu, who drove over from Hickory, kept plugging away at the nine patches.  We wanted 90 made today, and these ladies worked hard for several hours pumping out the blocks. 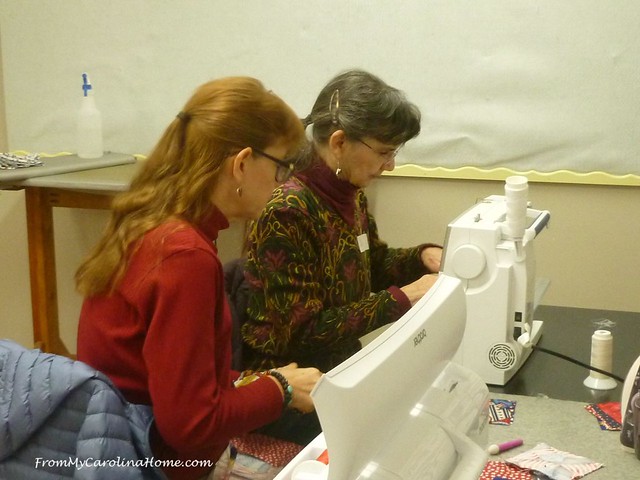 Eve Bennett began her day by taking stacks of squares, and making sets of nine to hand off to the ladies at sewing machines. 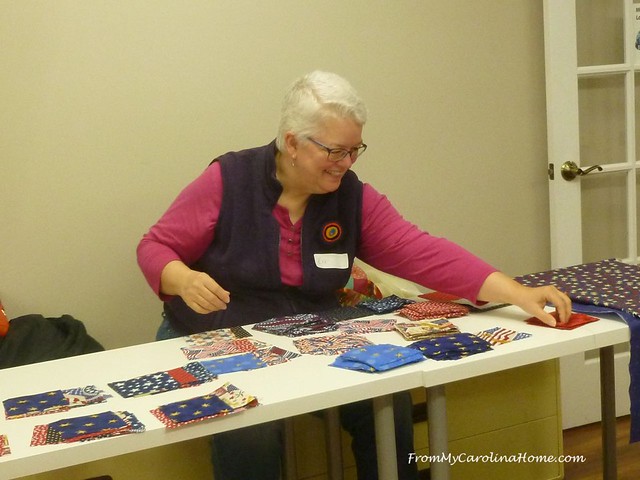 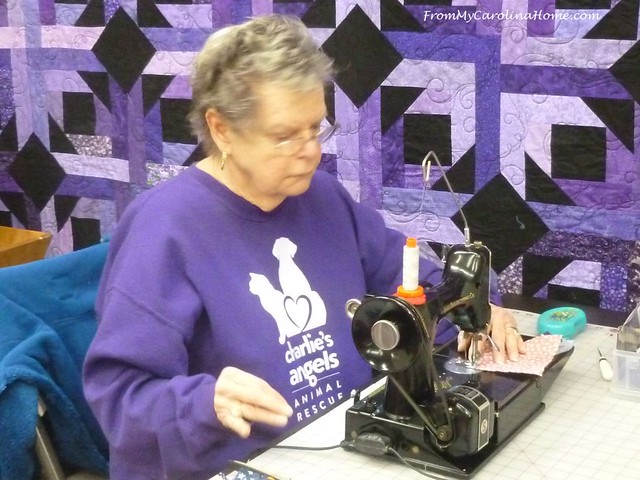 On the design wall, quilt top #1 was taking shape. 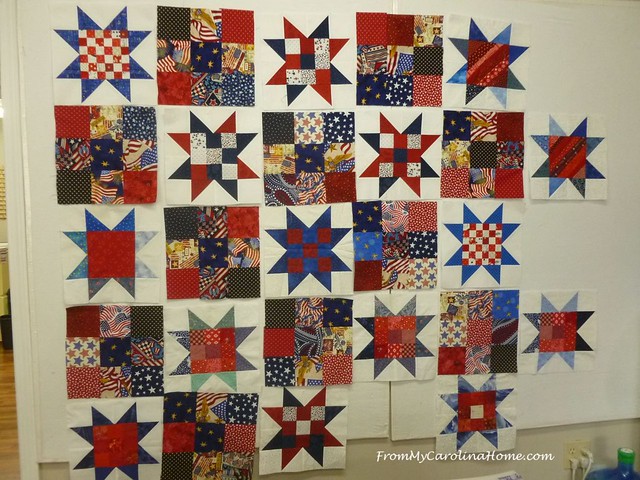 When we had enough for the whole top, we paused for a picture.  From the left, Charlene Greenfield, Renee Charbonneau, Jane McKay, Sam VanSant, Lori Skinner, Sally Mathieu and seated, Sandy Dublynn. 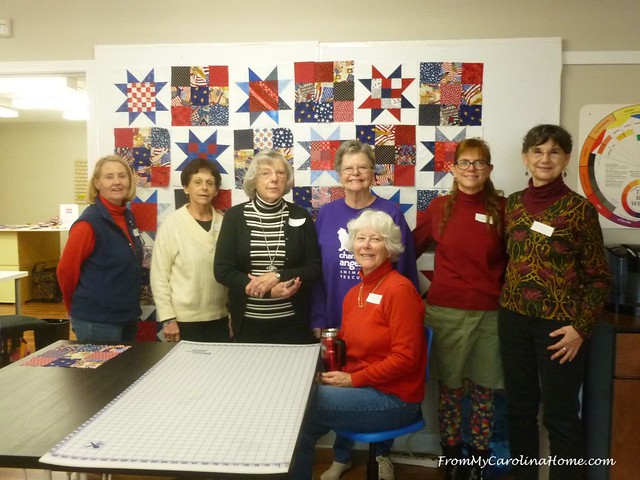 Eve moved over to Layout Central and began assembling our first top. 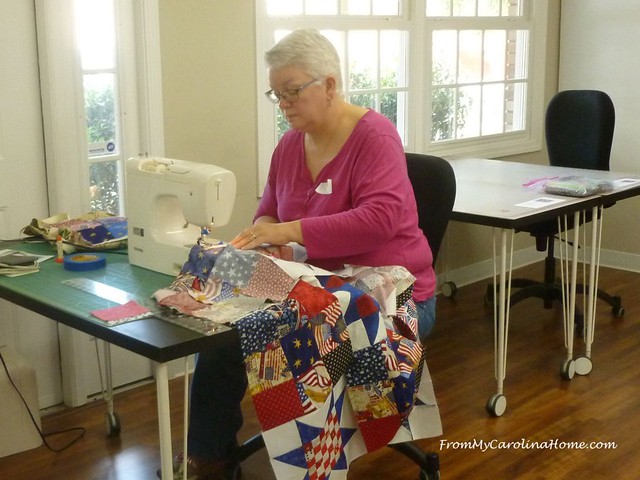 When we had top #2 arranged on the second design wall area, we again paused for a picture.  From left, Sally and Lori, Jane McKay, Sam, Bonnie Cunningham, Renee and Charlene. 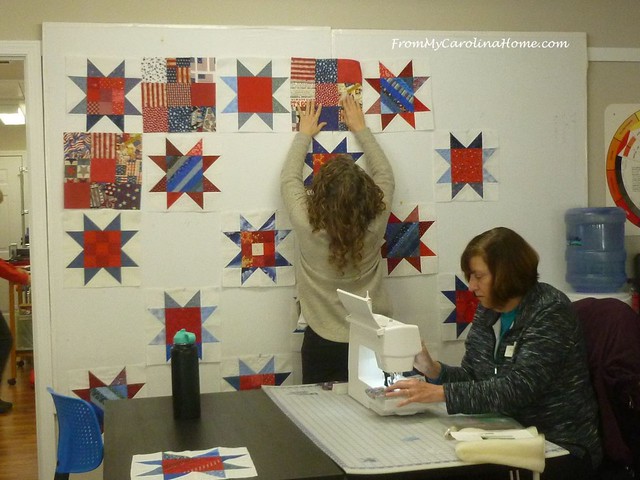 A short time later, Eve had the first top done.  We paused to admire our work, and then got right back to work. 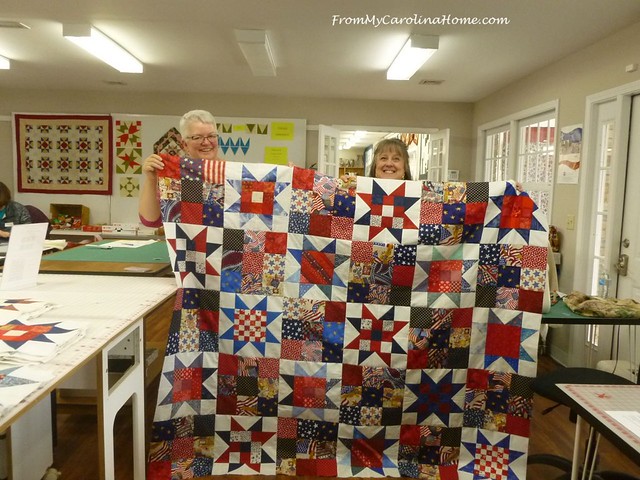 We paused one more time for another picture.  From the left, Alice Brown, Cathie Shelton, Barb Boatman, Cathy Walker, Cindy Barkee, Sharon Tucker, and me. 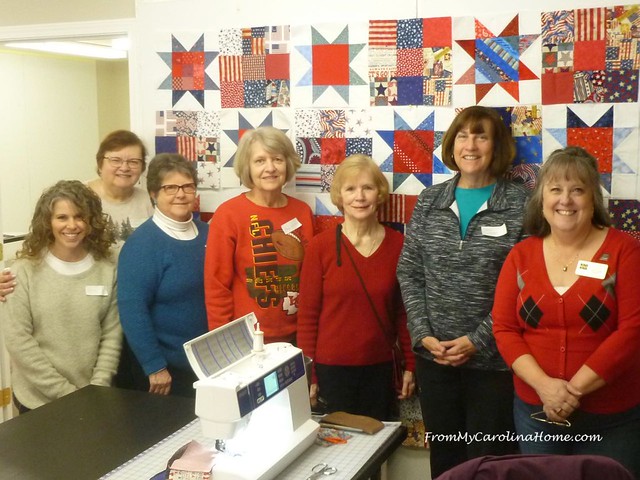 Top #3 was now ready to assemble, and Eve began working on its assembly. 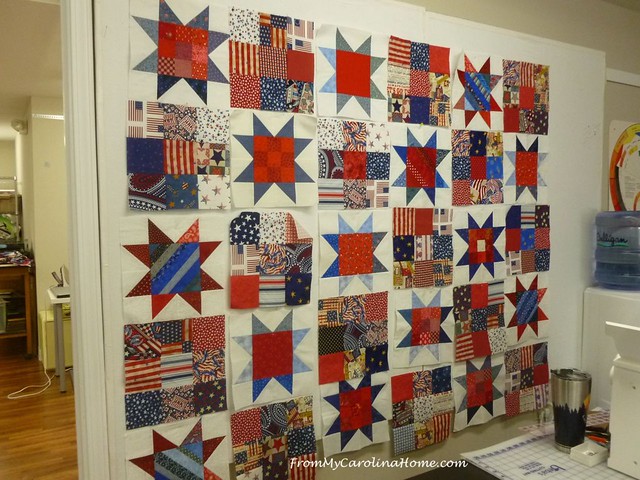 Alice Brown and Laura Jones begin the design process for top #4.  The stars are laid out and arranged to separate ones that looked alike, mixing in more star designs. 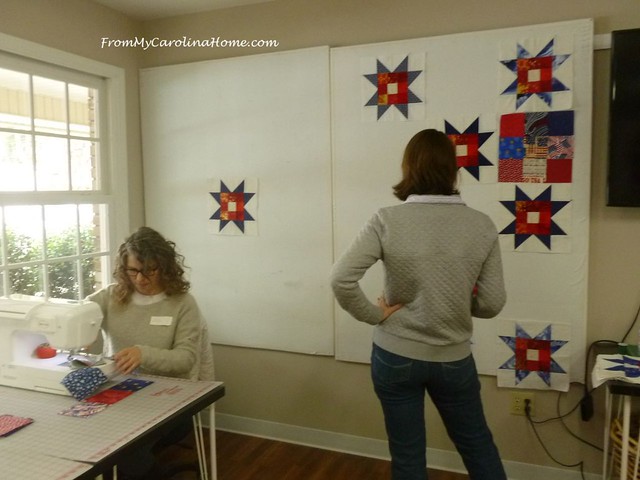 With Alice helping the nine patch production, it didn’t take long to fill in the blocks. 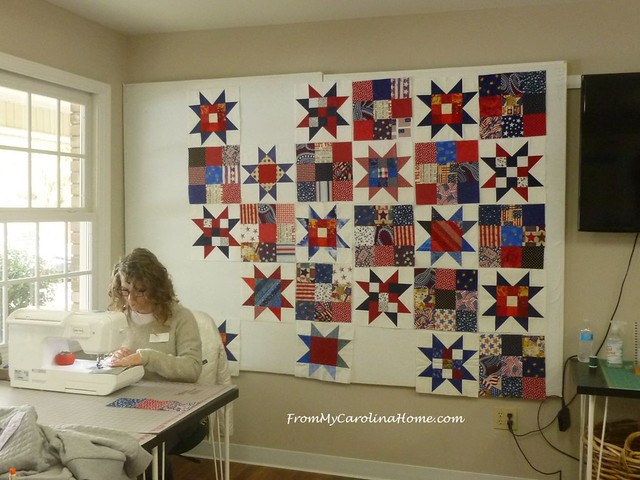 With Laura helping press, more nine patches were ready for quilt top #5.  Behind Laura, top #2 is in the assembly stage, with Bonnie Cunningham working on that.  Seated, Pam Kneis brought two QOV for donation that needed labels added.  She did that, then pitched in pressing nine-patch blocks. 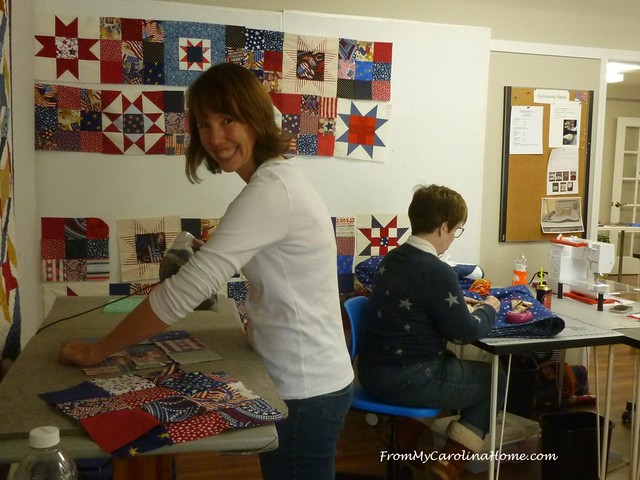 Alice then began assembly of this top. 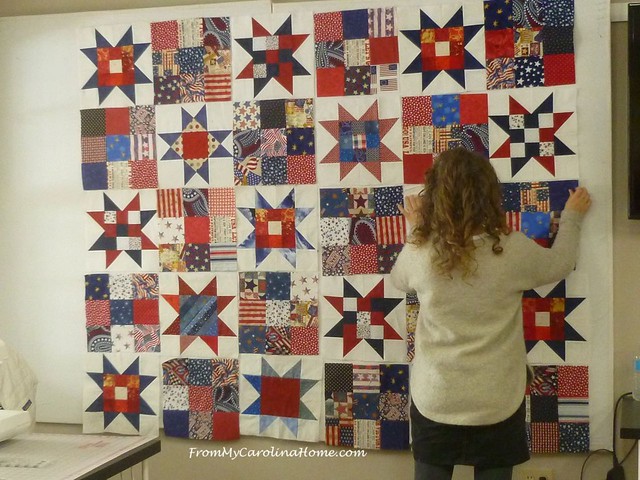 Back to the first design wall, quilt top #5 was coming together pretty fast. 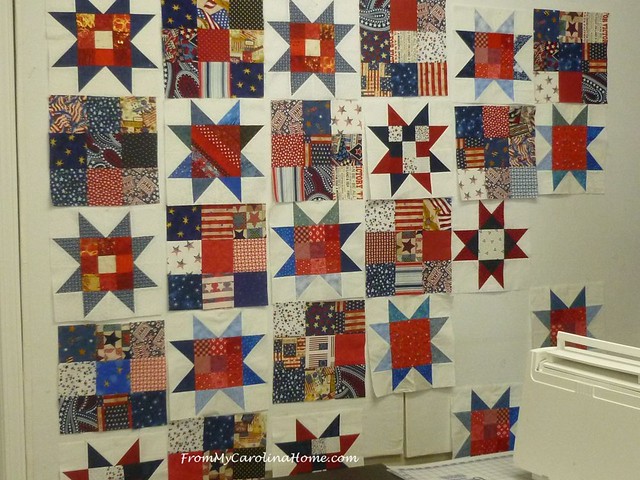 At the end of the day, we had two tops completely assembled by Eve Bennett.  Three tops were so close, that they were taken home by Bonnie, Alice and me for completion at home.  All that is needed on all three are a couple of row seams finished.  If we hadn’t had to leave because the store was closing, we’d have finished in another half hour or so.  Enough star blocks and nine patches (or squares to make nine patches) were left to make two more tops!!  So, between this day’s work and the generosity of readers sending in star blocks, the event will net a total of 7 quilts when all the tops are finished.  It was an amazing day!

Did you sew this past weekend?

To The Nines is now available on My Patterns page.

34 thoughts on “Sewing “To The Nines” for Quilts of Valor”