Last weekend we had a fabulous time with an annual event called MINIs on the Dragon.  It is a gathering of Mini Cooper owners for five days of drives, dinners, activities and fun.  MINIacs come from everywhere, not just this area.  In its 17th year, people came from 38 states as far away as California, plus Canada!  The event is very well organized, and our local Mini Cooper club members help out a lot with the events.  We belong to both Appalachian Mountain Minis and Upstate Minis, and worked alongside friends all week.  We had such fun, with drives in the North Carolina mountains, and on a fairly famous road in Tennessee called the Tail of the Dragon, plus working our shifts and contributing as we could for our first time attending. Picture heavy post coming up!  Heading west from home, we enjoyed the scenery on Highway 74 along the way. 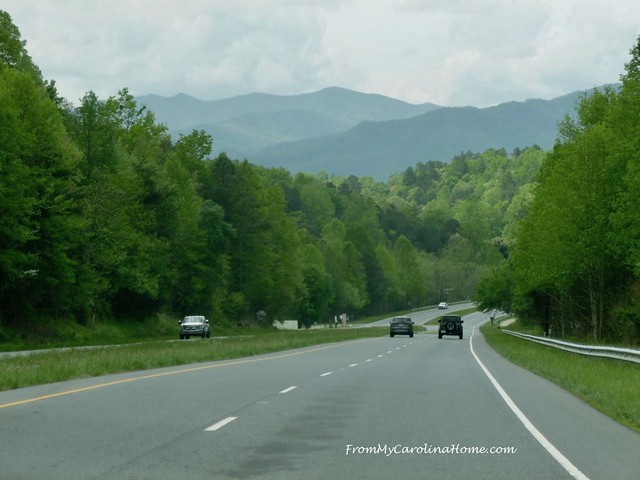 We arrived at Fontana Village, a resort and marina with lots of cabins and small buildings of rooms.  The village is large but spread out so it doesn’t feel that big.  It is located next to Fontana Lake and near Fontana Dam.  Our first shift working registration came before check in time, so we parked the car with a bunch of other Minis, and went to work.  There are mountains all around, and the cabins go part way up the hillsides.

After our shift, we checked in.  The view from the lodge at the top was wonderful. 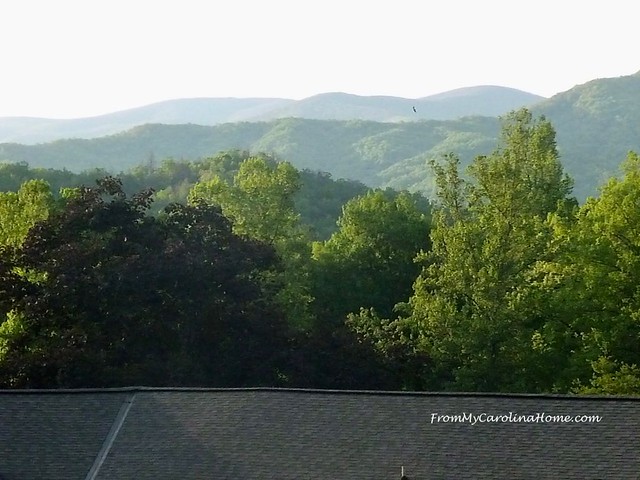 We were given a room in one of the small buildings with eight rooms, nestled in the trees.  One thing you need to know, there is no cell service here unless you go to the lodge building and use the hot spot there.  Internet wifi is spotty too.  But, we didn’t care as the computers were left at home for a few days of device-free fun.  The Welcome Dinner this evening was the first event of the week. 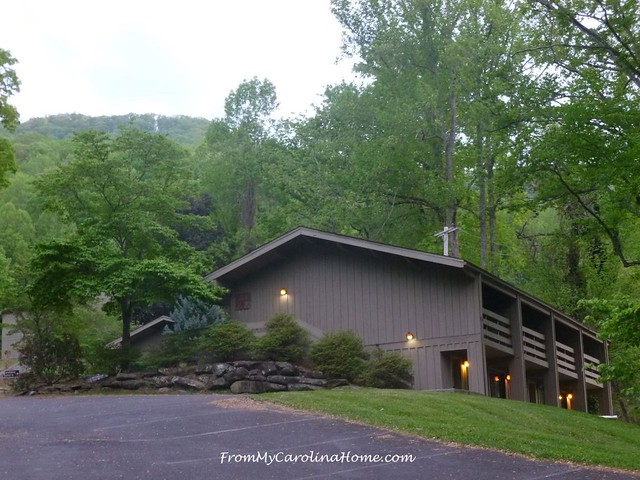 The next morning, we got in line at the General Store parking lot with 20+ more Minis for the first drive of the week, up to the Cherohala Skyway. 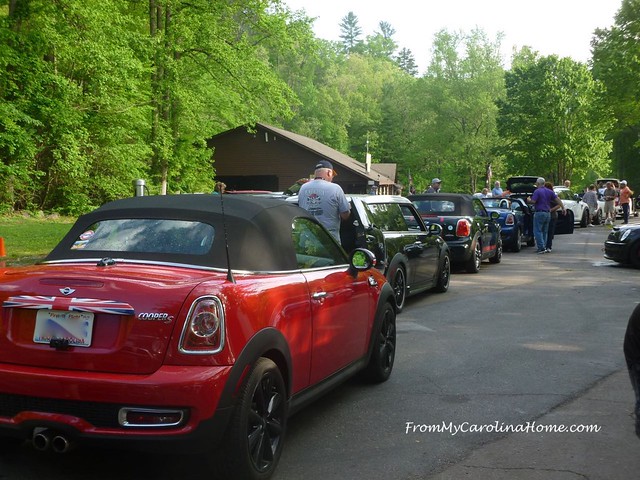 The Cherohala Skyway is a National Scenic Byway, similar to the Blue Ridge Parkway. It is much newer, and opened in 1996.  It runs through two national forests, the Cherokee National Forest, and the Nantahala National Forest and the name Cherohala comes from those.  It connects the Tellico Plains of Tennessee with Robbinsville, North Carolina. 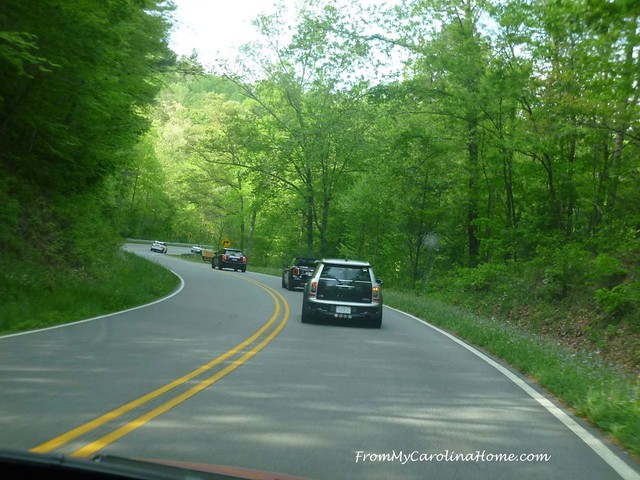 There are several elevation changes as the road winds its way through the mountains, from just 900 feet above sea level at the edge of the Tellico river to 5400 feet at the highest point on Haw Knob. 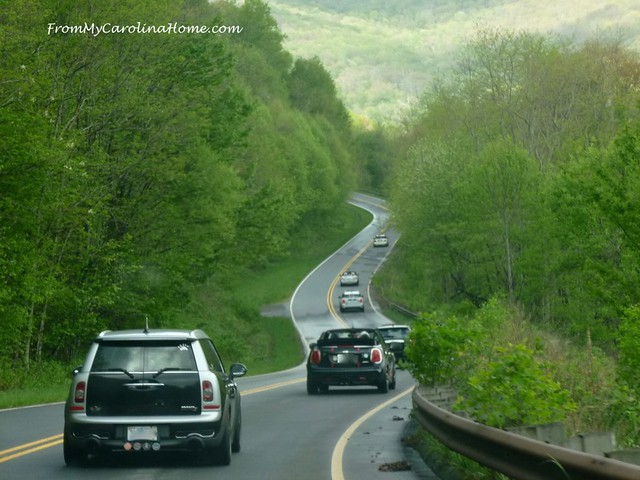 These structures are actually crossing structures for the endangered flying squirrels of the Unicoi mountains.  In 2008, a group of scientists set these up, then monitored their use.  The squirrel’s habitat had been fragmented by the road, but a few years later there was documentation via video and radio collars that the squirrels had learned to use the structures to safely cross the road.  This has helped their population numbers, and may assist in keeping this species of flying squirrel from extinction. 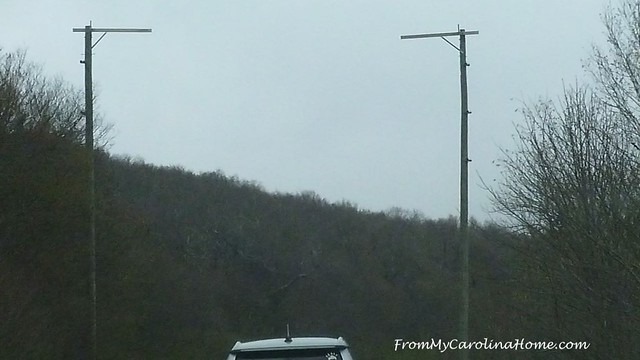 Our first stop of the drive was at Hooper Bald overlook and trailhead, at 5290 feet above sea level. 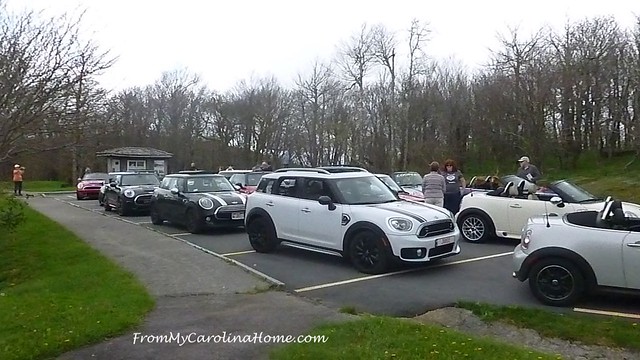 The next part of the drive took us down to a lower elevation.  Lots of Minis in front of us… 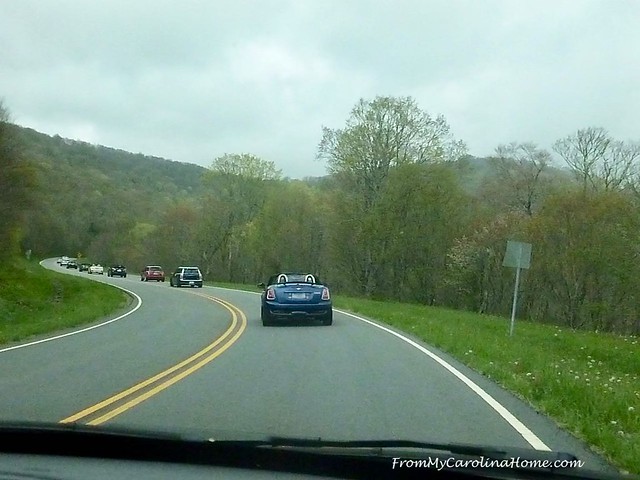 as well as behind us. 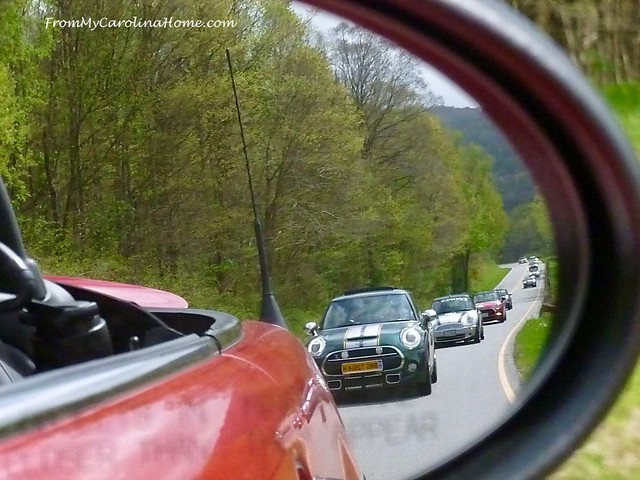 Next stop was Osterneck Overlook, at 1009 feet above sea level. 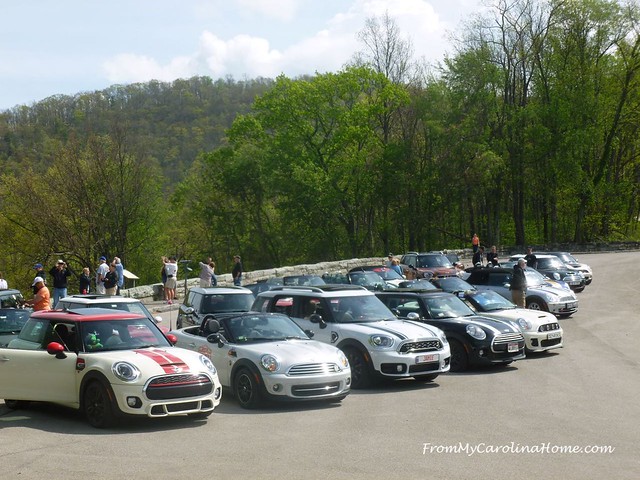 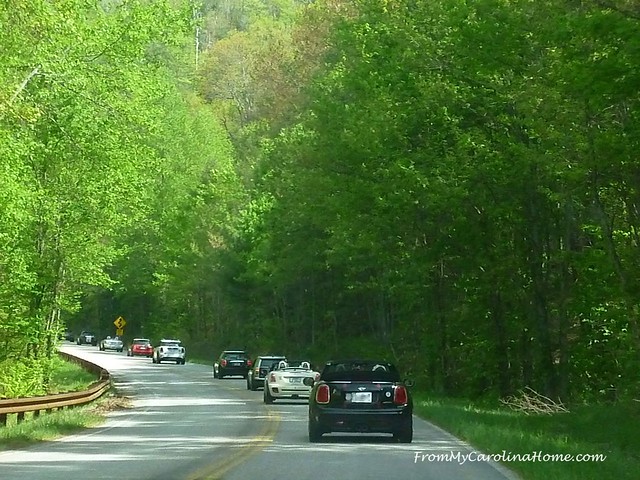 We drove along the Tellico River.  Boulders and rocks create eddies of bubbling white water with rich green all around. 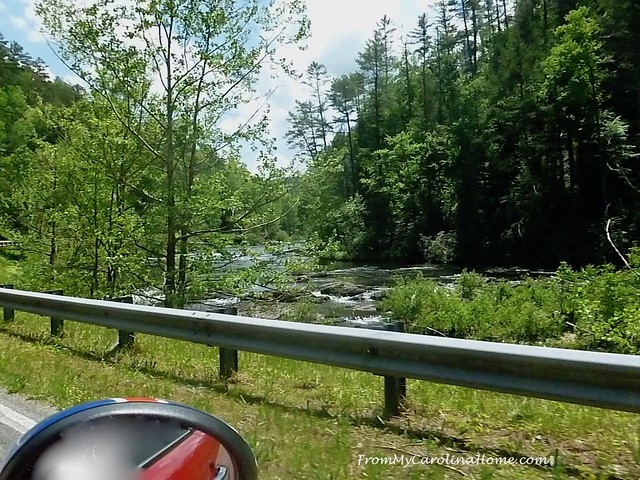 Then the road climbed again.  Some of the overlooks had lovely stone walls to mark the edge of the overlook.  The original and new sections were 60 miles of scenic beauty, lush green trees and mountain vistas.  Our third stop was at Unicoi Crest at 4470 feet above sea level. 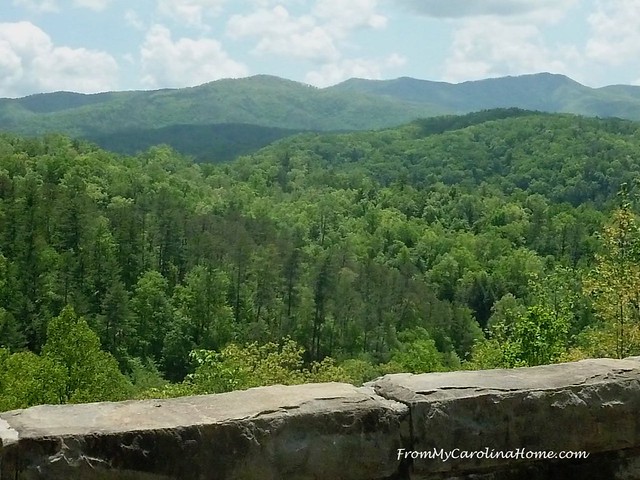 I got a few pictures from the car, lovely mountain views all around.  Puffy clouds drifted along their way, with no rain this day. 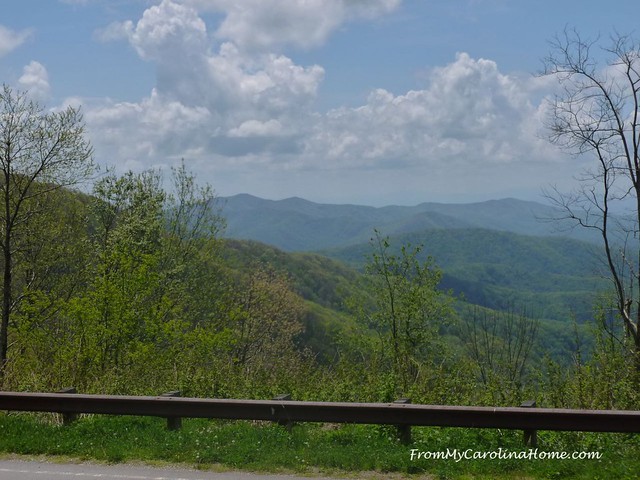 Later that night was Bingo night.  No, we didn’t win any of the games, but we sure had a raucously good time playing!! 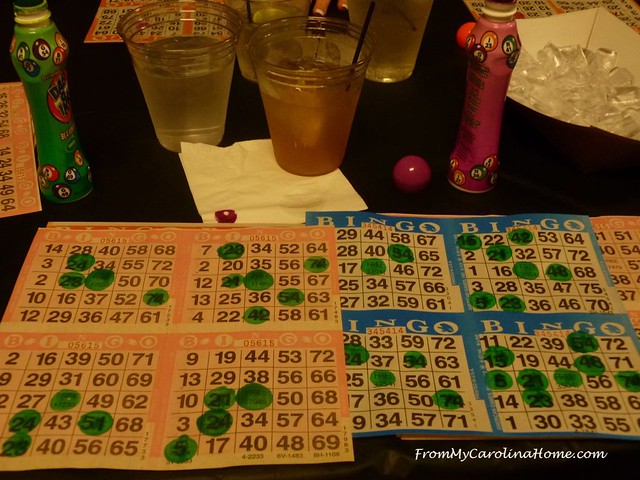 The last event of the evening, a fireworks show ended a long fun day. 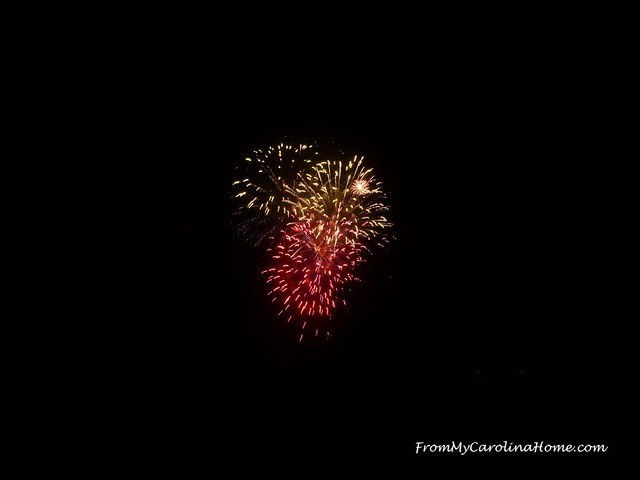 The next morning, we assembled again for the drive on the Tail of the Dragon.  This is a fairly famous road around here for car clubs and motorcycle groups.  The Tail is 11 miles long with 318 curves. 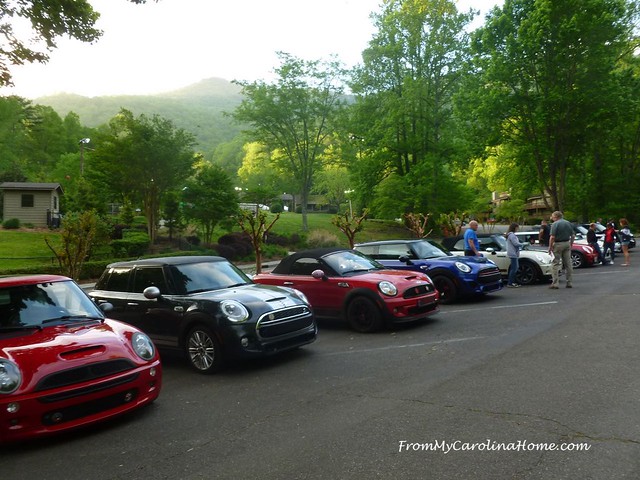 Here is just one of the 318 curves, a jog to the right then a hard left.  I’ll tell you more about this day’s drives later. After this drive, we worked another registration shift in the late afternoon.  Dinner was at the resort’s grille restaurant with friends. 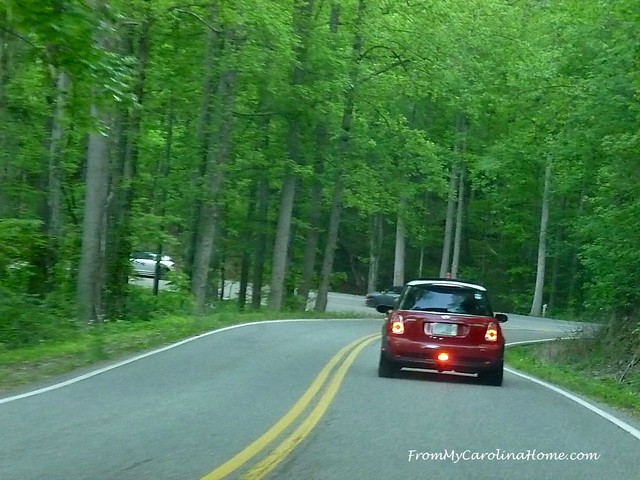 The next day, almost 200 of the over 500 Mini Coopers registered assembled for a panoramic photo.  It was overcast, which I think made a better picture as the shadows were less prominent. 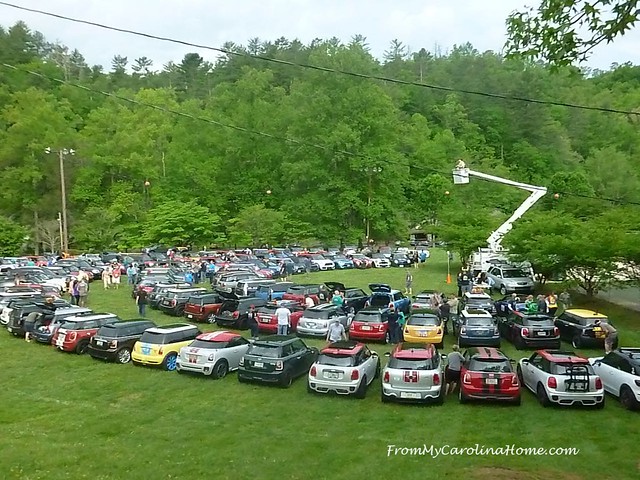 Misty rain and low clouds hung over the mountain tops around the village. 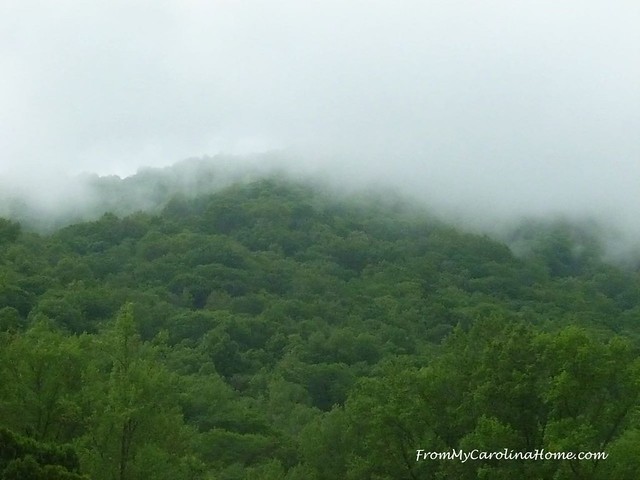 We did one more outing, then went to help set up for the final dinner.  There were two of these animated, air driven dragons on the stage.  The wings went back and forth. 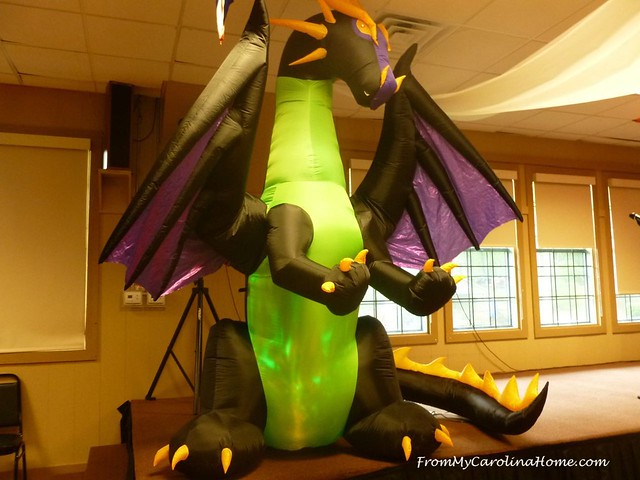 Our last assignment was to arrange almost 400 cupcakes made by the resort into the British flag using a pattern provided by the organizer.  It wasn’t hard, and only took us about half an hour.  The results looked super! 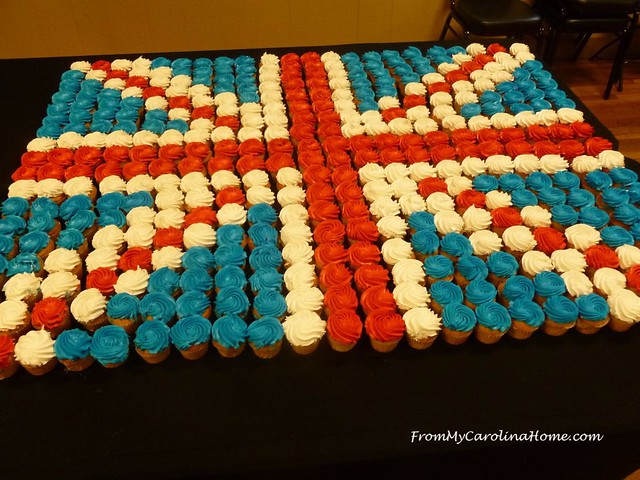 Sunday morning, a last look at the mountains around Fontana lake before heading home. 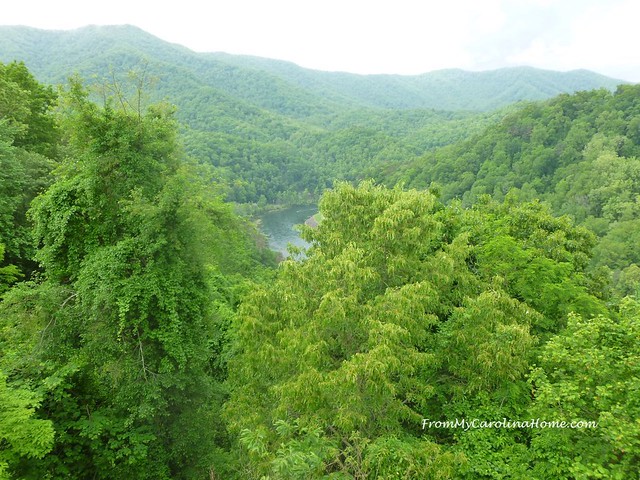 We had such a good time, and look forward to next year’s event!  If you are a Mini Cooper owner, the event dates for the next several years are on the website MINIs on the Dragon – future dates.  Although Fontana Village rooms are normally hard to come by, this year there were a few available, so those reserving now will get them.  We reserved our room for next year before leaving.  Mini Cooper owners, come join us next year!
Are you doing any short travel trips this spring or summer?

Sharing with Take Me Away!

21 thoughts on “MINIs on the Dragon!”