Autumn Jubilee continues today with a recipe for a wonderful meal for a brisk fall day.  A slow cooked meal, ready for supper while sewing on a rainy day, this is one of my favorite things!  Welcome new readers to my blog!  You’ll see I do a variety of post subjects.  So come along for a great meal, and a super giveaway!! Congratulations to Loris Mills who won the first giveaway of an Inspired LED Sewing Machine Lighting kit!  Congratulations also to Diane H who won a Fat Quarter Shop $50 Gift Certificate!

I had craving for a home baked ham last summer, and one thing I wanted to do was experiment with an idea from Milk Street about slow cooking.  Christopher Kimball made a comment about not being able to overcook meats if the oven temperature wasn’t high.  After all, you cannot get a roast to overcooked 250 degrees if the oven is only at 180.  I wondered if my slow cooker would be a better choice than the oven. 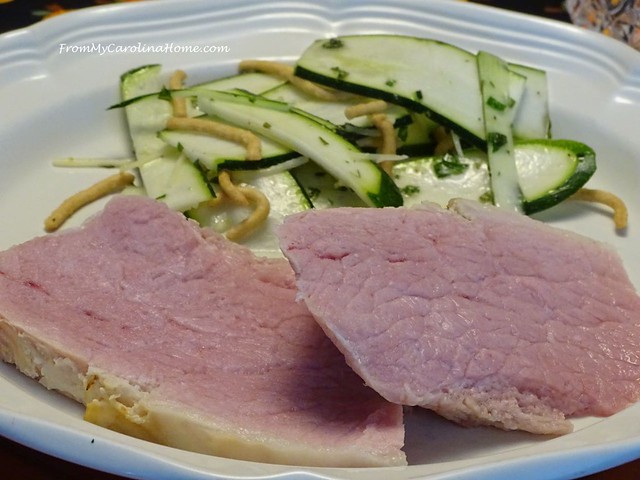 Have you noticed most hams are already fully cooked?  So all we need to do is heat them up.  Cooking a ham at 350 is almost a guarantee that it will come out drier than it should.  I know as I did that for many years until I tried my experiment, and boy what a difference!  Now I had tender succulent slices like you get from a fine deli, full of intense ham flavor. 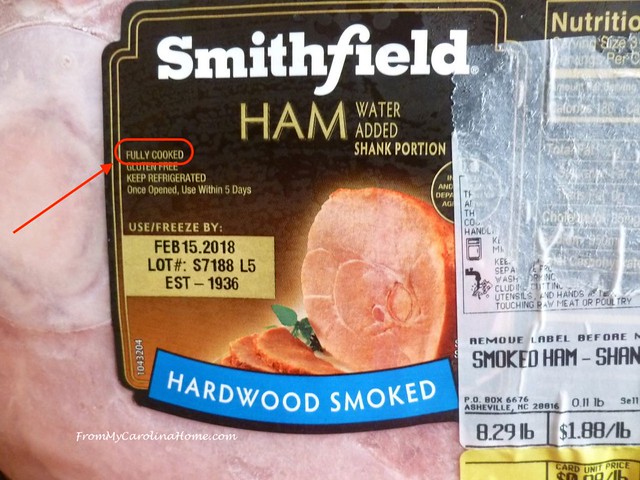 So, I got a shank portion half ham, and found out when I got it home that it wouldn’t fit in my slow cooker.  LOL, best laid plans, right?  Well, there is more than one way to do this, and you might not have a monster size slow cooker like I do.  Anyway, first thing is to remove the skin if your ham has it. 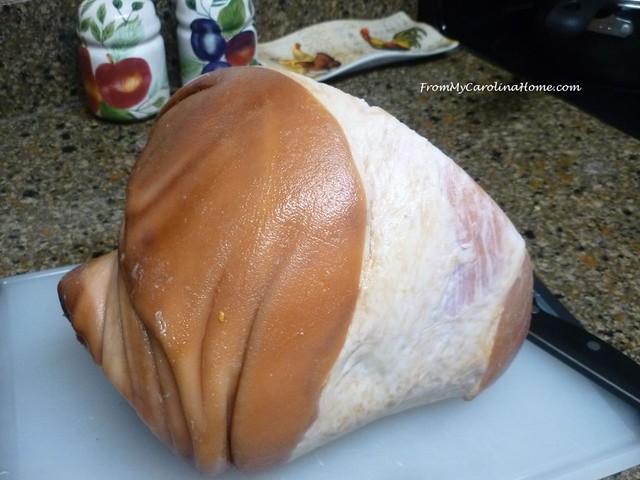 Just use a sharp knife, pulling the skin away from the meat, and slicing through the fat layer.  Remove large fat sections too, they aren’t needed. 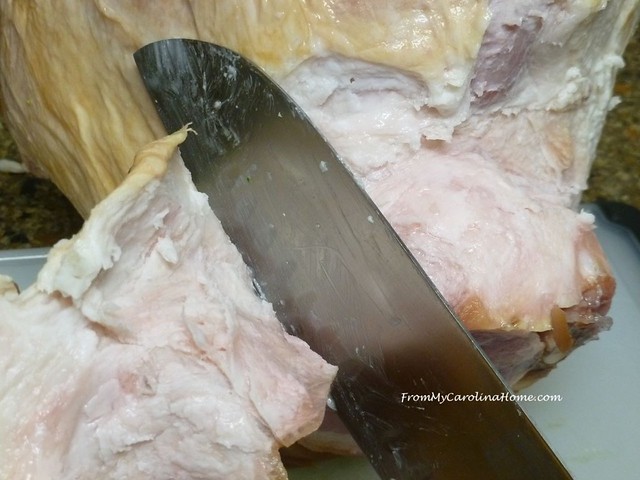 All trimmed up, I have left about a 1/4-inch thick fat cap. 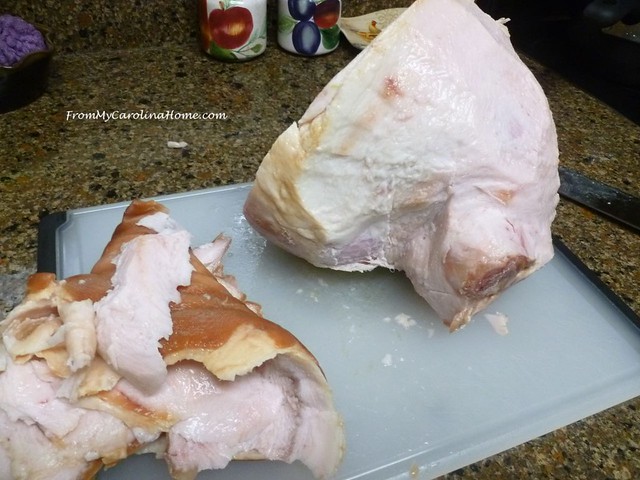 Now, place the ham in a roasting pan, cut side down and cover it.  My mother always used a paper bag from the grocery store, but you cannot do that nowadays as the chemicals in the paper now are not food safe.  So, use parchment paper to create a tent.  This will help keep the moisture in. 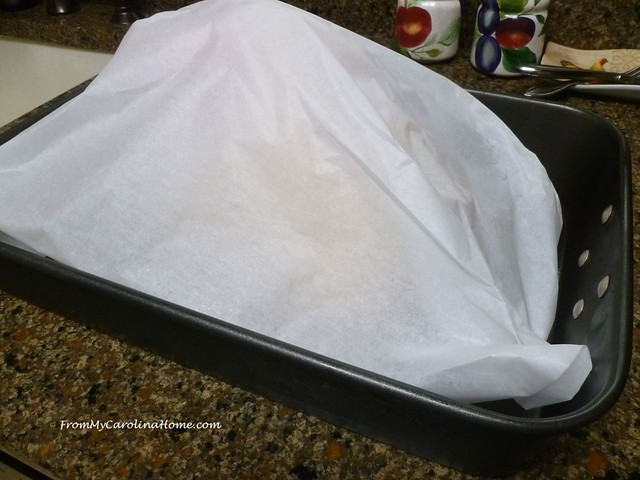 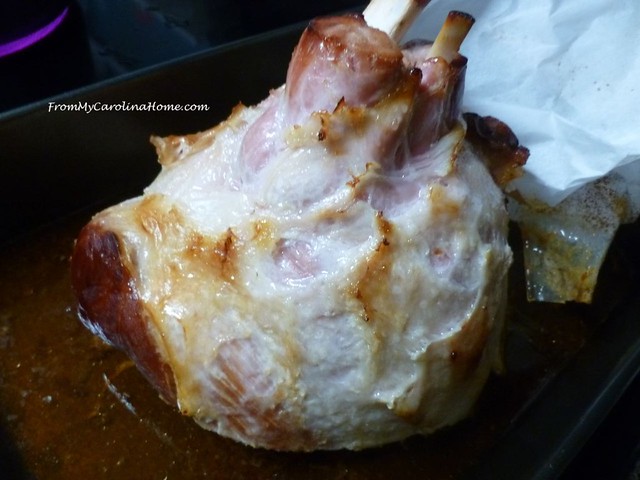 Just look at this moist and tender, juicy and flavorful ham.  Yum. 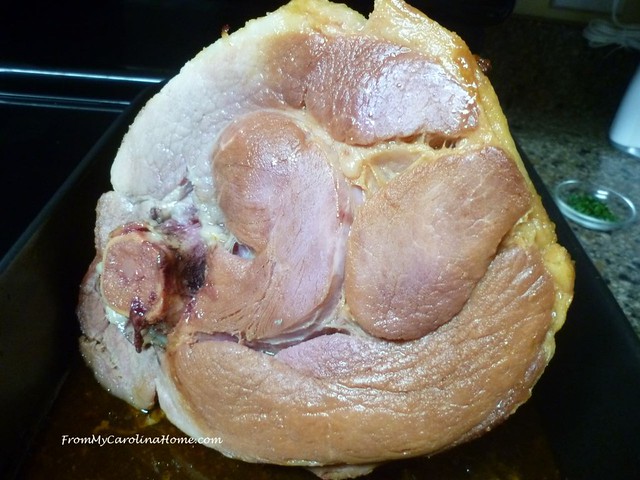 The real proof of the moistness was the next day, just as juicy for sandwiches for the holiday picnic. 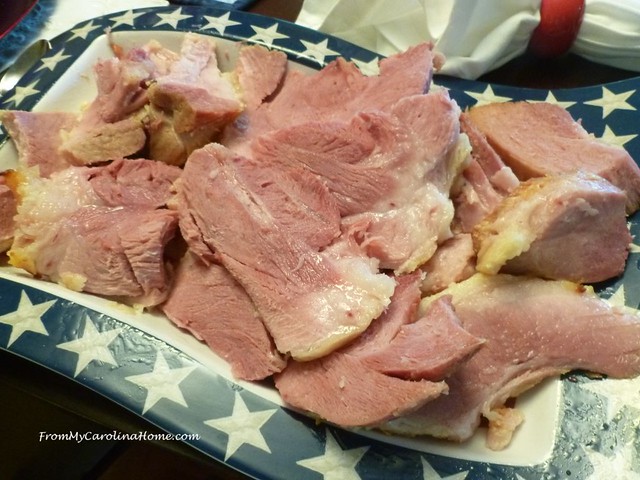 But still, I wanted to do one in my slow cooker.  So, just this past weekend, I got a butt portion half ham, thinking it would be small enough to fit. 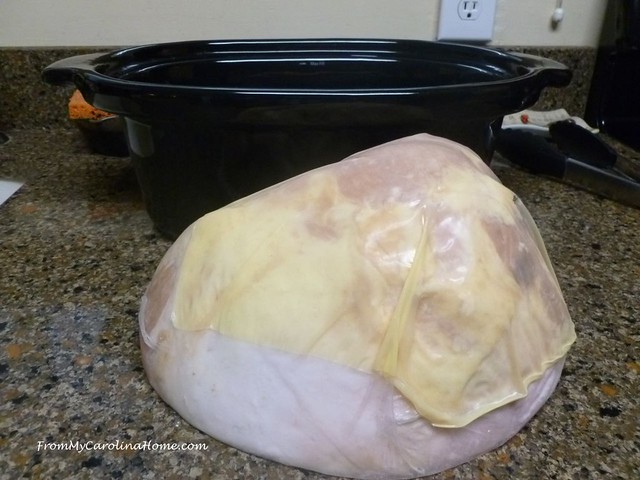 There is a limit, the max fill line is 4-1/2 inches from the bottom. 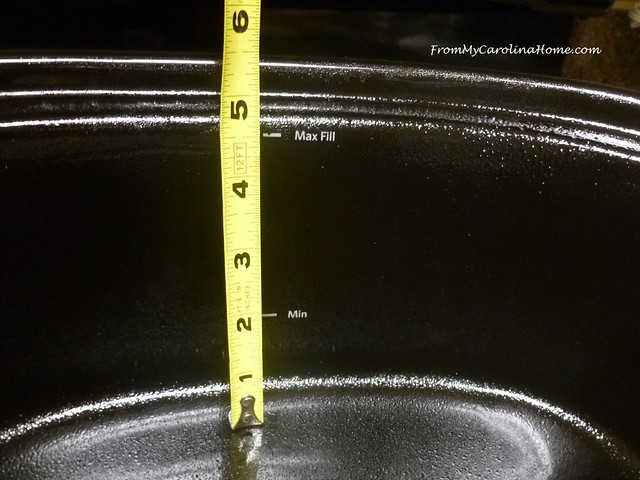 And my ham is 5 inches, but that is easy to fix when the bone isn’t sticking through like it does in a shank cut. 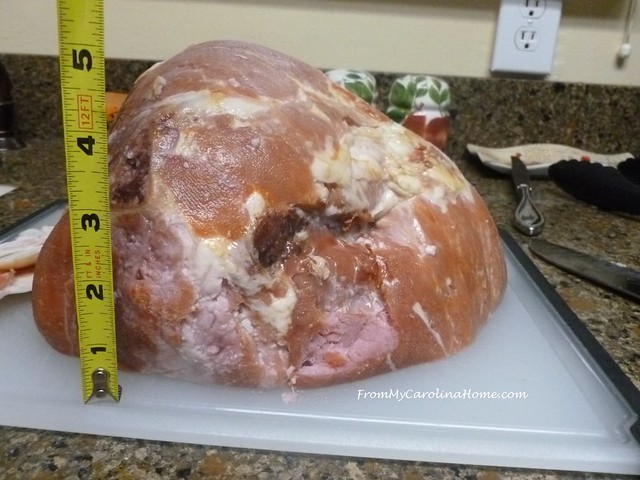 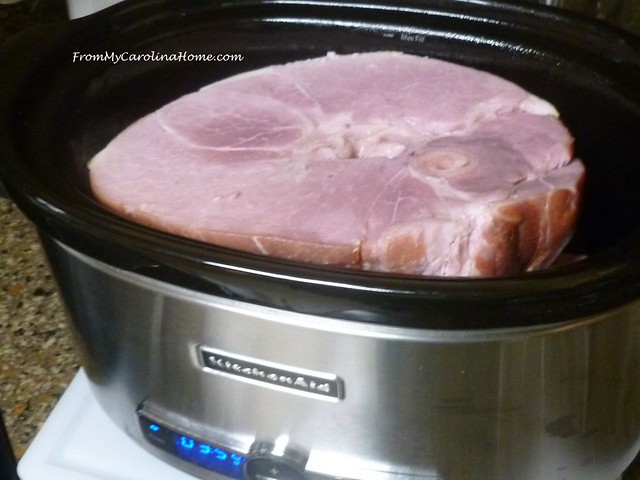 I set my Kitchen Aid 6-Quart Oval Slow Cooker (Amazon affiliate link) on low for a four hour slow cooking.  I like the programmable controls which will switch the cooker to a keep warm mode when the time is up.  Plus, this method will give you a way to make a Thanksgiving ham to go with your turkey for large gatherings as most of us don’t have several ovens. 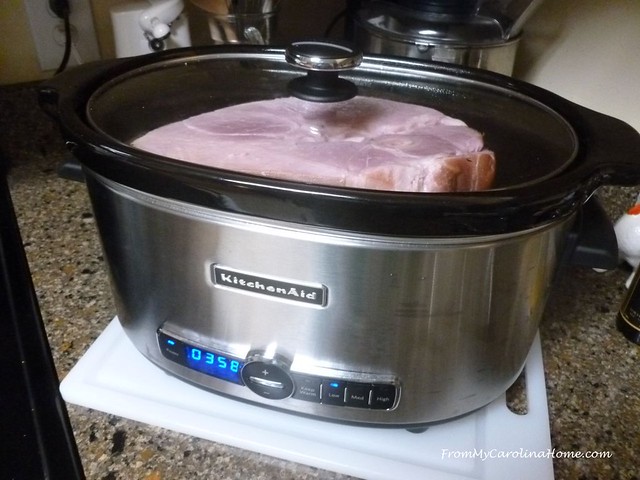 It actually took a bit longer to get my 8 pound ham up to 140 degrees, food safe for a fully cooked ham.  At 4 hours it was only 130 degrees, so I let it go 30 more minutes.  It might have come up to 140 during its resting time, but I don’t like to take chances.  At 4.5 hours, it was 153, more than enough.  Resting will bring the temp up another 10 degrees, ultra-safe, but not overcooked and still super moist and tender.  If you don’t have an instant read digital thermometer, HERE are a few to consider.  Taking a temperature is the best way to judge if the meat is done without overcooking. 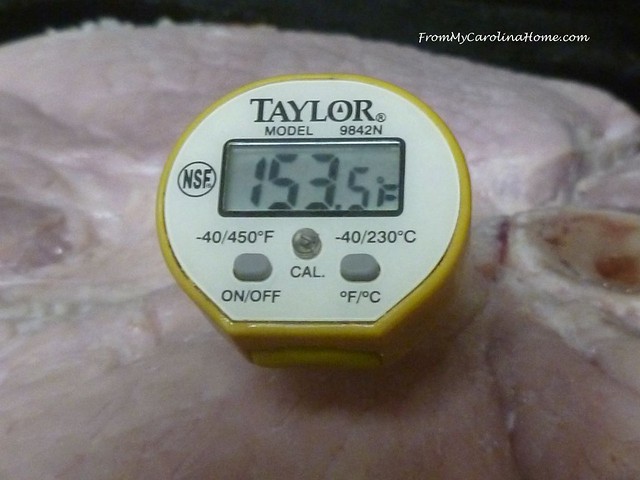 Near dinnertime, I decided to make a wonderful side dish from my Milk Street cookbook called Shaved Zucchini and Herb Salad with Parmesan.  With my mandolin, I made the zucchini ribbons, added fresh herbs and fresh Parmesan, then mixed up the flavorful citrus dressing with lemon, honey and olive oil. 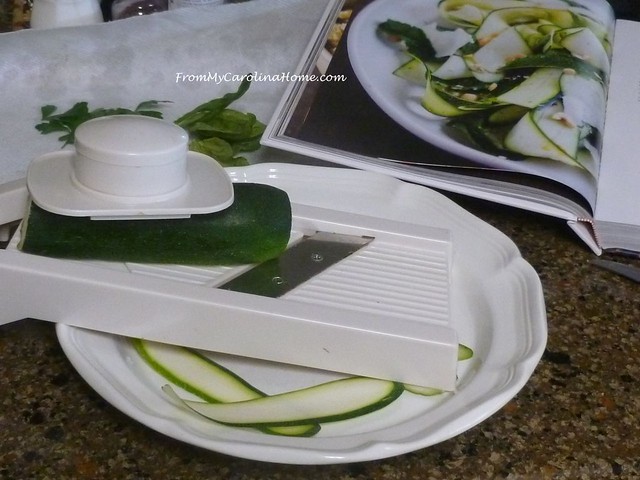 The ham was done, and just look at all the juicy goodness!!  I did not use any kind of glaze, as slow cookers don’t really work for glazes, but the oven method would. 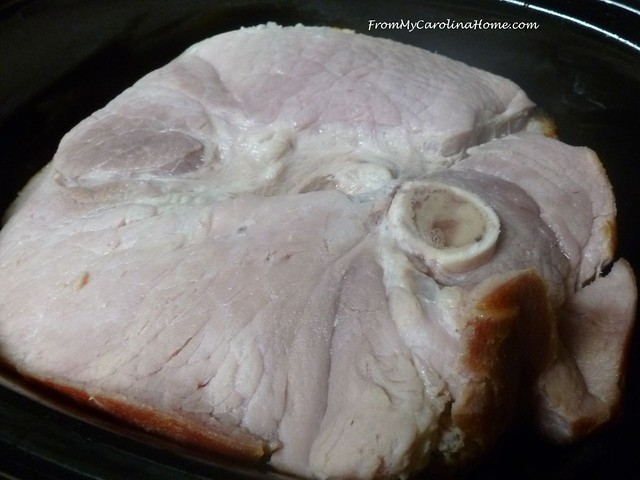 Slicing up the ham, I placed the pieces back into the broth to keep warm. 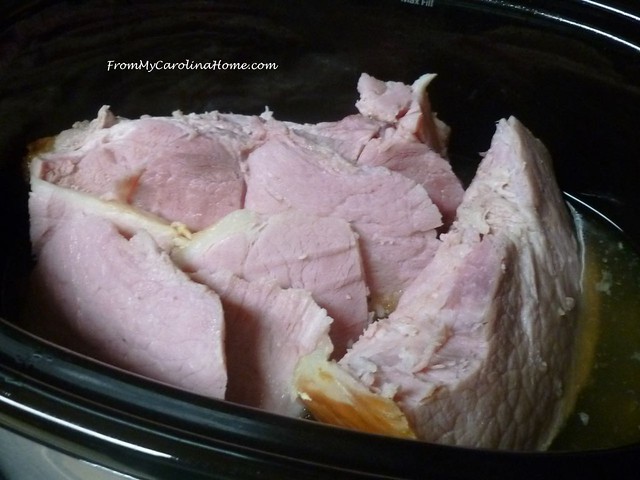 Luscious, thick slices of ham with the light and refreshingly crisp zucchini salad.

I did substitute chow mein noodles for the hazelnuts in the recipe.  I just don’t care for nuts.  But you can make it as you like.  The recipe is on the Milk Street website, and you need to subscribe to see it, or get the cookbook.  There are some recipes that are free for anyone without a subscription, but subscribing is really inexpensive. For my readers that need gluten free options, this meal would qualify without the chow mein noodles.  For hungry guys, add a baked potato or some mac and cheese. 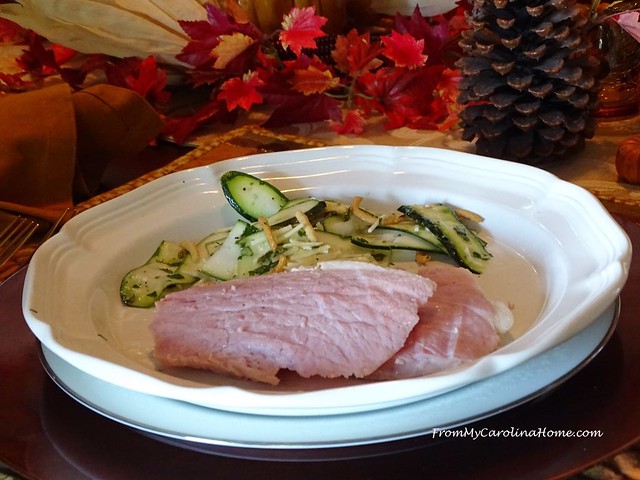 Update note, the link for the Madam Sew Rafflecopter entry on Monday wasn’t working first thing, so email subscribers didn’t get the link.  If you want to enter that giveaway, comment on the Block A post and use the link in the post.  If you have already commented on that post, click HERE.  The entries will be open Sunday, October 14th.

Yum, I’ll be having quite a few thick ham sandwiches in the next few days.  I think I could eat most of this ham all by myself, given a loaf of artisan bread, some creamy butter and a week or so. 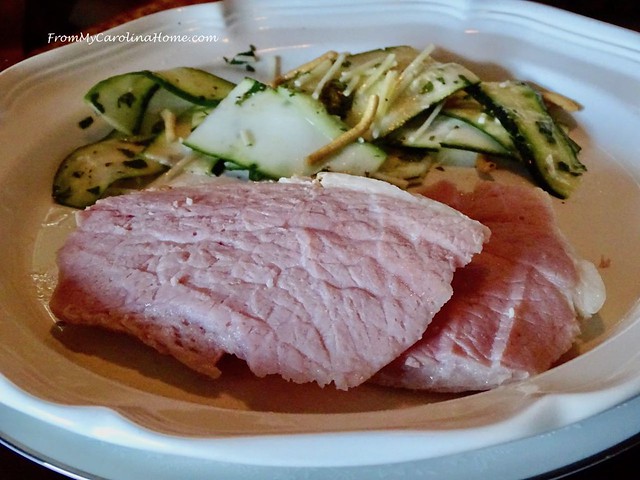 The wonderful people at Milk Street are giving away a copy of their newest cookbook, Milk Street Tuesday Nights. Visit their website for recipes from the show, and lots more.  Register with your email address and get access to recipes for a short time as they are presented on the TV show.  I am delighted to have them for Autumn Jubilee this year as I have been a Christopher Kimball fan for years!  This book publishes on October 16th, but you can pre-order now on Milk Street, or by using my affiliate link with Amazon – Milk Street Tuesday Nights.  The book has over 200 recipes that take one hour or less to make, many around a half hour!

What is your go-to meal for weekdays?