Visiting older houses is a favorite thing to do, as I like to see the workmanship and architecture that is not common today.  While we were in Ormond Beach last month, we took the tour of the Casements House, John Rockefeller’s winter residence.  The house was originally built in 1913, and named the Casements due to the large casement windows which kept the house cooler during the hot summers. 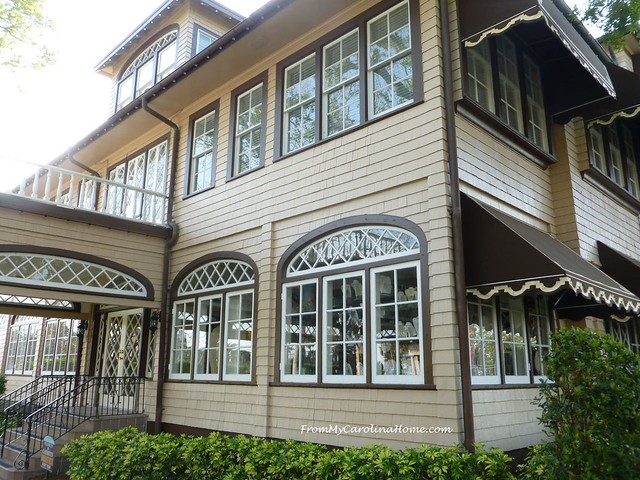 There is an urban legend as to how Rockefeller acquired it. One of the docents told us that Rockefeller spent two winters at the world famous Ormond Hotel across the street.  As the richest man in the country at the time, he found out that his bill was higher than anyone else’s bill.  So, he bought the house in order to thumb his nose at Henry Flagler, his long time business partner in Standard Oil and part owner of the Ormond Hotel. 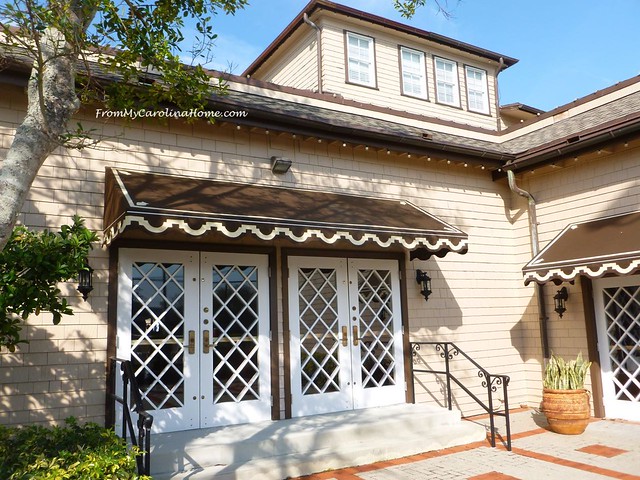 Our docent guide had many stories like that, about Rockefeller’s interest in racing as well, and the story of the Birthplace of Racing on the Ormond Beach, stretching into Daytona Beach.  The Casements House was purchased by Rockefeller in 1918 when he was 78 years old.  He spent his winters here in the 20s and 30s. A large historical marker tells some of the story. 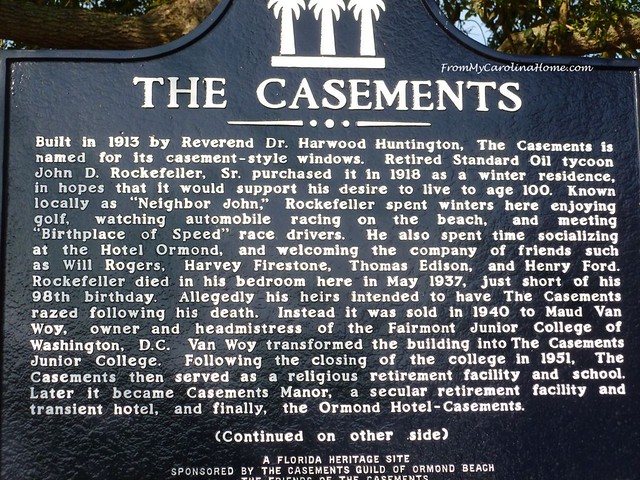 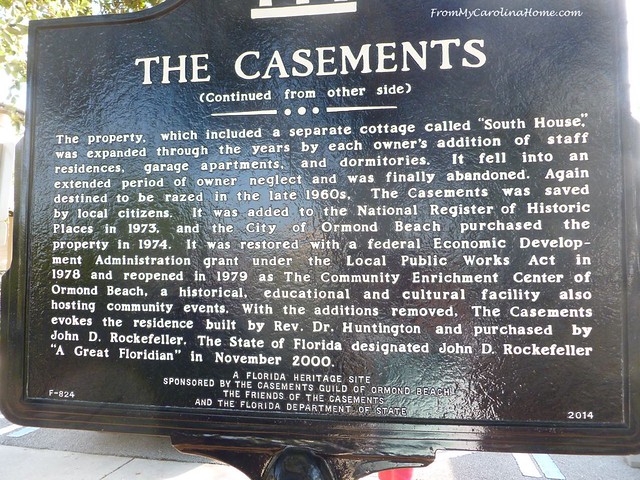 One startling fact is that the house was remodeled several times by subsequent residents, but eventually was neglected and abandoned.  The roof collapsed in several places, and the destruction of weather and critters was extensive.  Pictures of the damaged house were in several places to show the extent of the $1.1 million  restoration.   The house was placed on the Historical Register in 1973, purchased by the city in 1974, with restoration taking 5 years. This is a photo of the damaged main rotunda area.  In several rooms, photos showed the ‘before’ views. 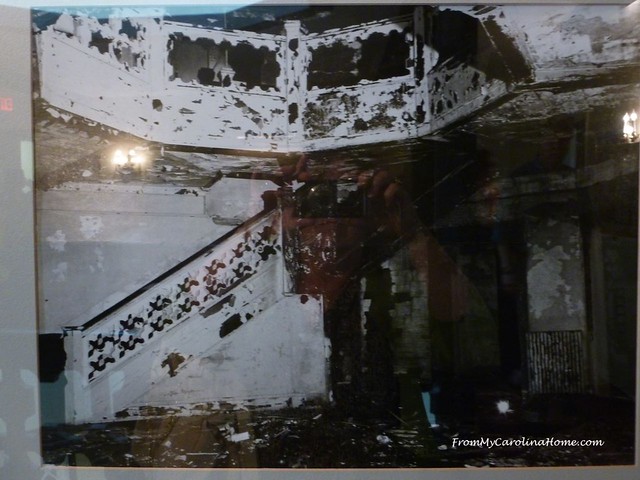 This is the same staircase now.  Black and white photos show rooms from the early years of the house. 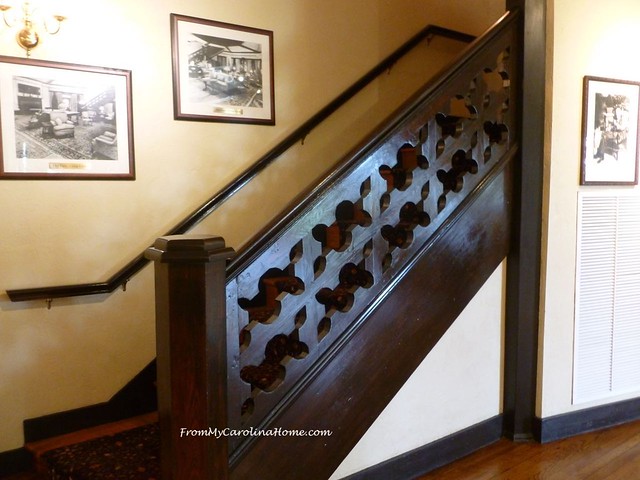 Looking up at the next level, the restoration of the woodwork is impressive. 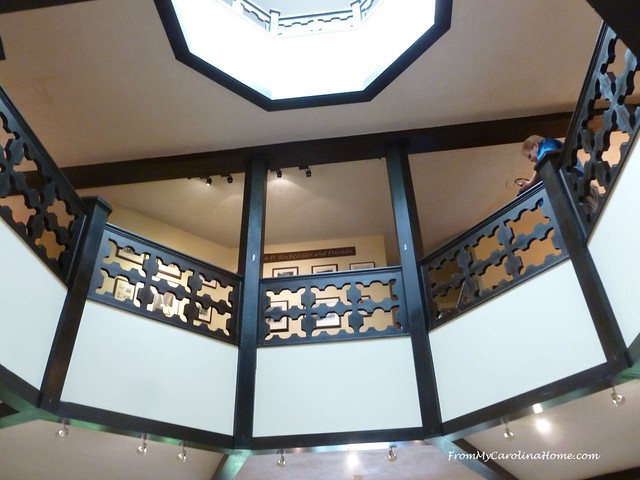 Above is a gorgeous stained glass skylight.  It reminds me of a quilt pattern. 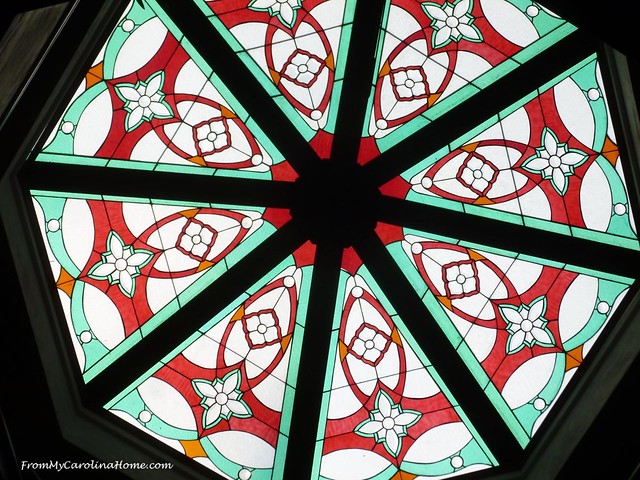 This is the rotunda area now. 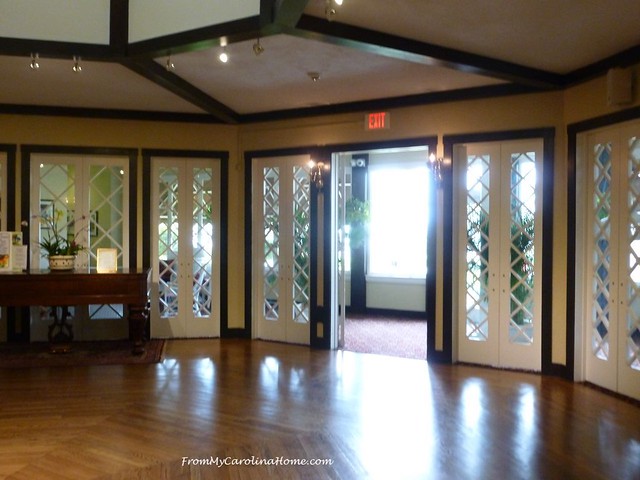 The piece of furniture on the left in the picture above is a Steinway piano. 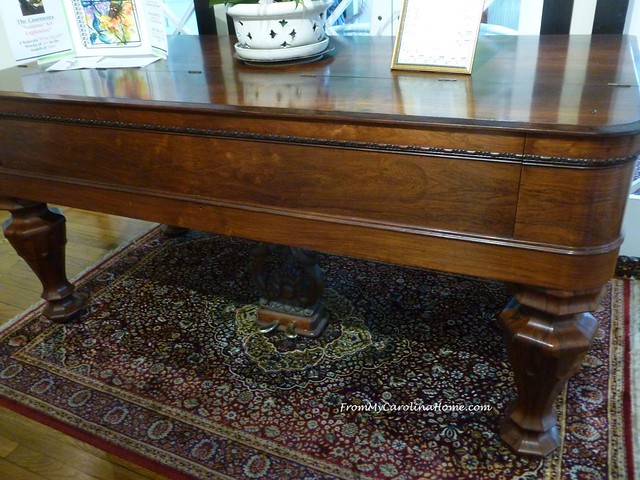 A placard on it talks about its rarity and history. 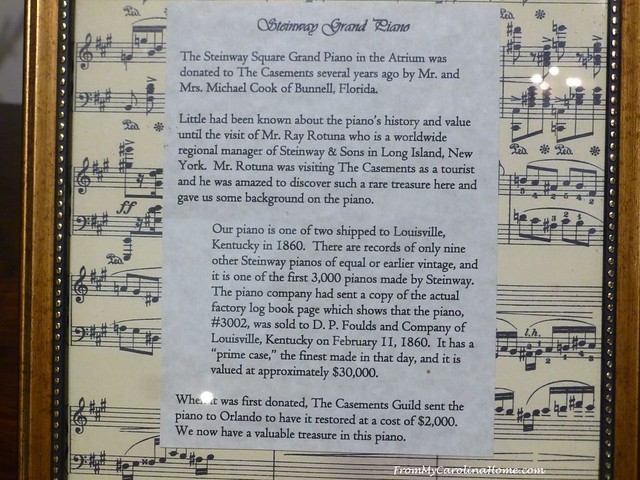 Looking through the casement doors, there is a light and airy sitting room. 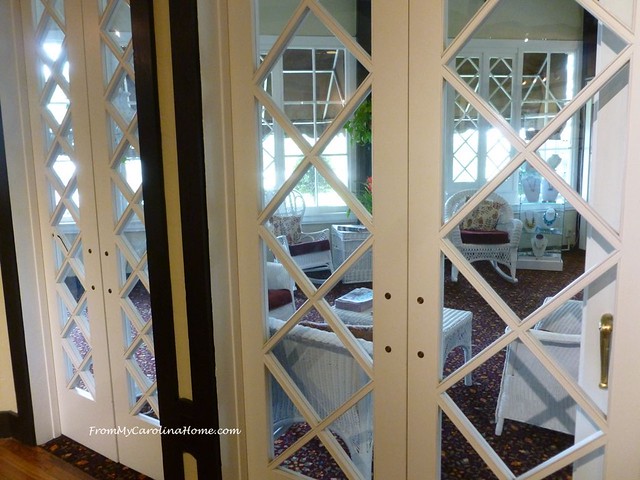 A photo on the wall shows what the room looked like when Rockefeller lived there. 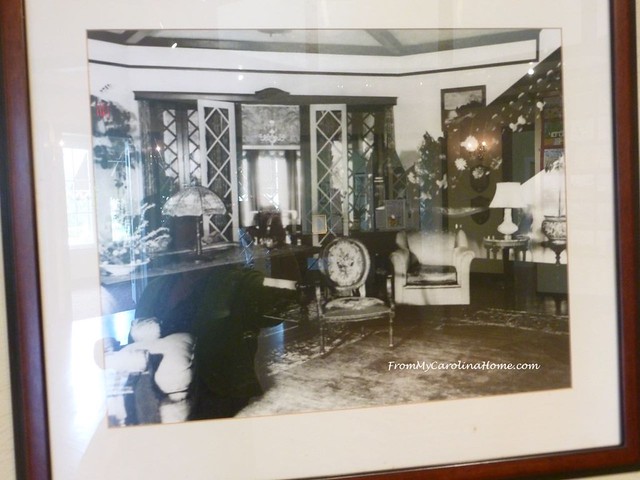 The workmanship in the restoration was impressive.  This fireplace no longer is used, but the mantle woodwork was restored to its former beauty. 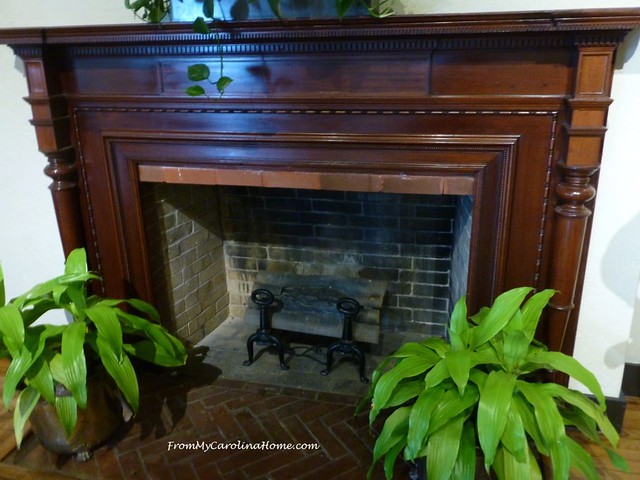 Moving on to the kitchen, here is a photo of what it looked like before restoration. 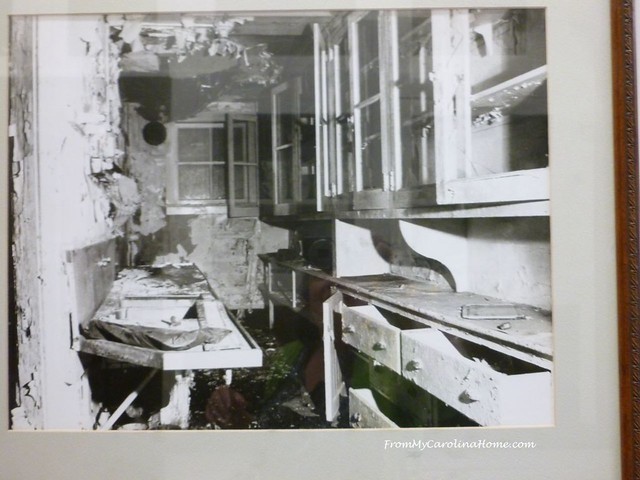 Then, another photo of what the kitchen looked like during Rockefeller’s era.  I wish I had some of those transom windows in our home, seen in this photo over the cabinetry.  They really help to vent the warmer air out, keeping the room cooler.  Certainly in Florida in a home without air conditioning, this would be important, especially in the kitchen. 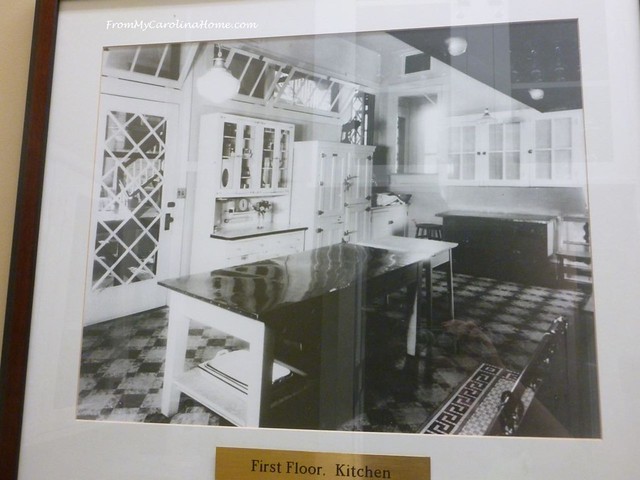 The glass fronted cabinets have been restored, and china reminiscent of the era is stored here. 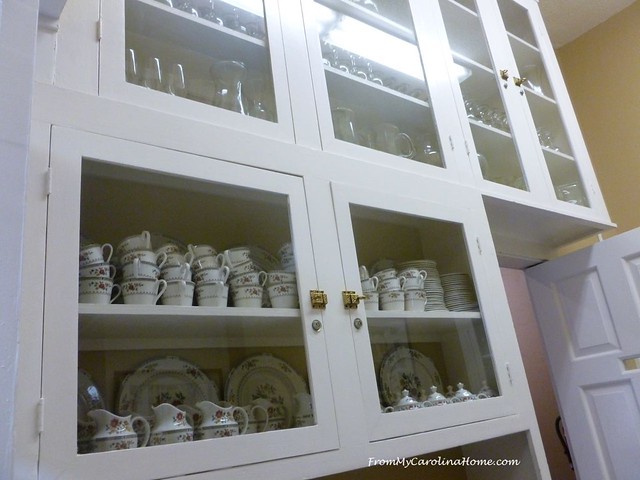 The house is now a cultural center available to rent for events like weddings, so the kitchen is now a working catering kitchen.  They do cooking classes too. 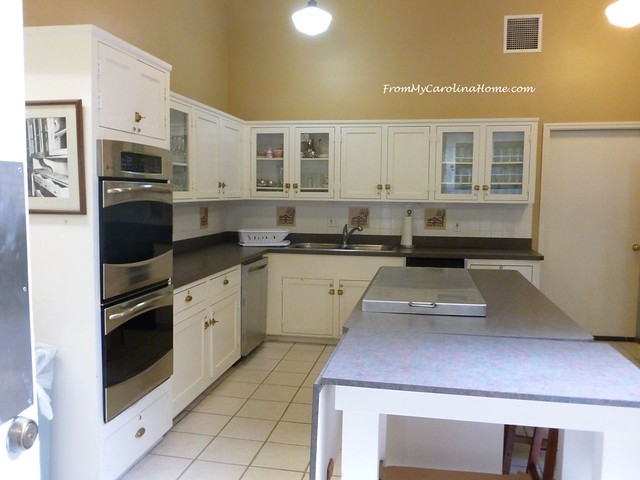 Rockefeller was known to give lavish Christmas parties during his time there.  He also gave children’s parties and events. 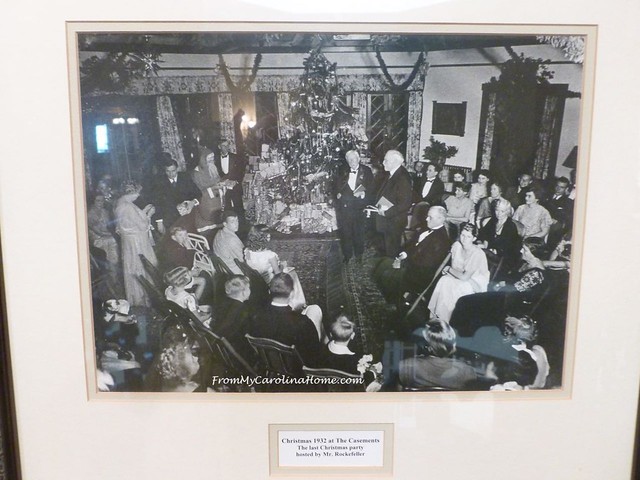 Moving up to the second level, the dining room has been restored with period correct furniture. 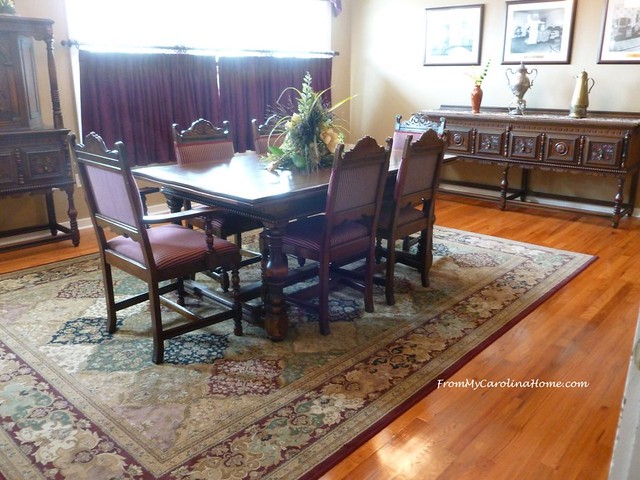 A sideboard has more mementos from Rockefeller’s day. 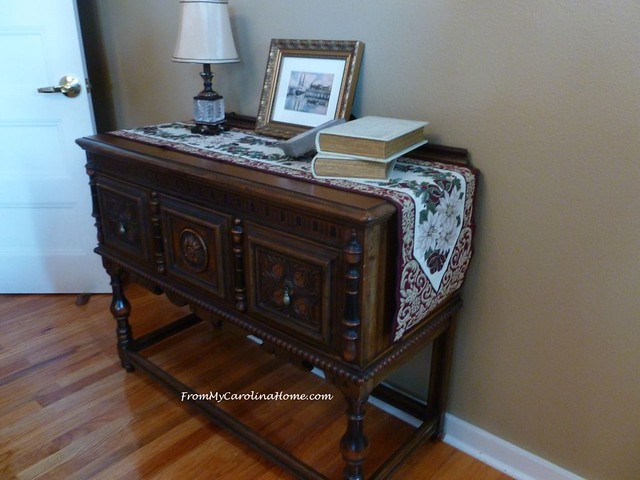 Newspaper clippings and other papers were on view in the history room.  An article from a 1937 New York Times after his death enumerated his many donations to medical and scientific research totaling over $530 million.  This article is online here.  Although it is postulated that his contributions were in fact not altruistic, but instead an attempt to corner the pharmaceutical market and make more money, the donations did help advance our medical knowledge and research. 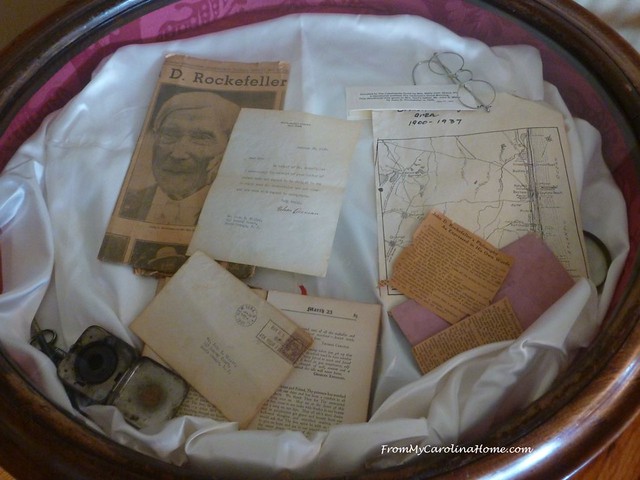 On the wall, a page from a 1918 Wall Street Journal showing the richest men in the country at the time.  Rockefeller is number 1, note that the numbers are in thousands (see the arrow noting the last three zeros are omitted from the list), so Rockefeller’s fortune was estimated at 1.2 Billion. 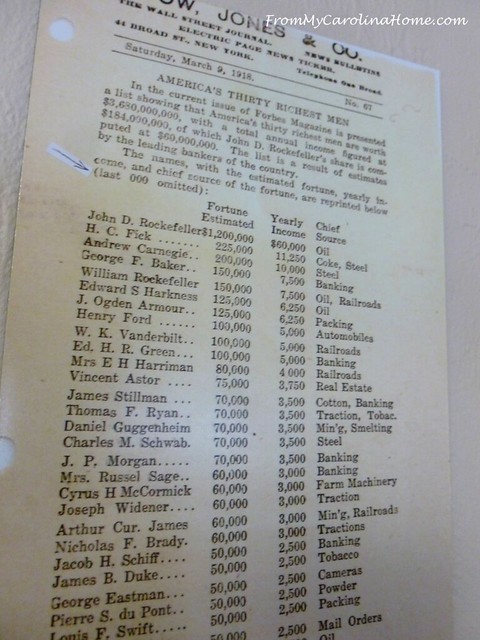 The next room was set up as a sitting room and office.  The docent told yet another story about Rockefeller’s life and how ruthless he could be.  When shipping of the oil products became more costly, Rockefeller formed a railroad cartel, giving his oil company preferential ‘volume’ rates, as much as a 50% discount over his competitors.  When this became known, the cartel’s charter was revoked.  While it may have aggravated his competitors, the end result was less expensive kerosene for heating and light rather than the whale oil people had depended on up to then. 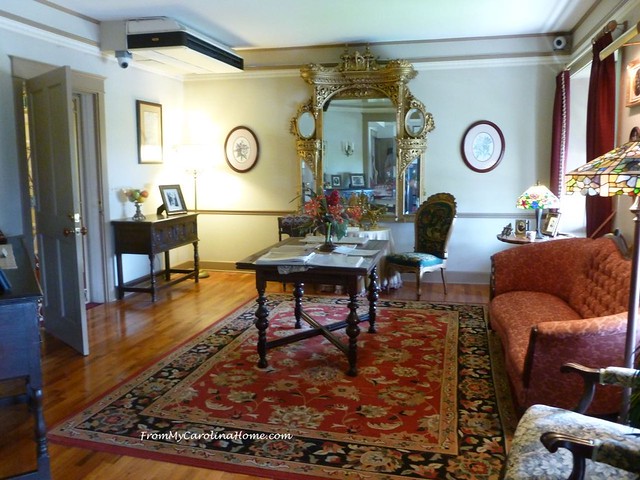 His desk is the actual one, rescued from storage, along with some of his ledgers.  Rockefeller loved to give dimes to guests and children, and the docent told us that over his lifetime it was estimated he gave away $30,000 in dimes.  He was known as “Neighbor John” during his time in Ormond Beach. 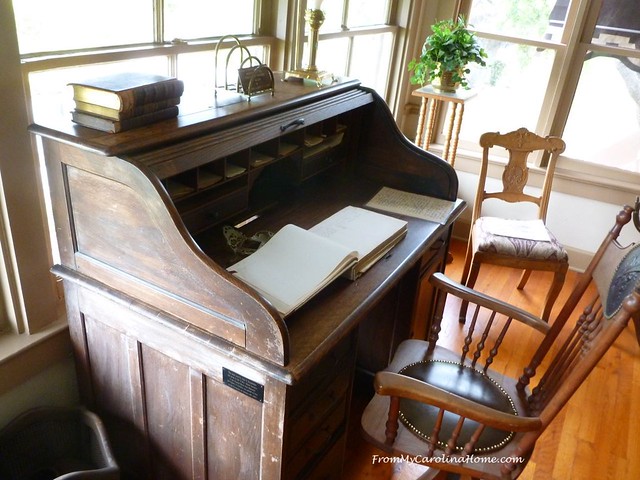 The view out his window was lovely.  Rockefeller lived here in winter until his death in 1937.  He passed away in his sleep in his bedroom in this house which had been added on the first floor but is no longer there.  He lived a fascinating life, and there are a couple of books to recommend if you are interested in reading more.  These are Amazon affiliate links – Anointed With Oil by Grant Segall, and Titan: The Life of John D Rockefeller by Ron Chernow.  Thank you for using my links when you can. 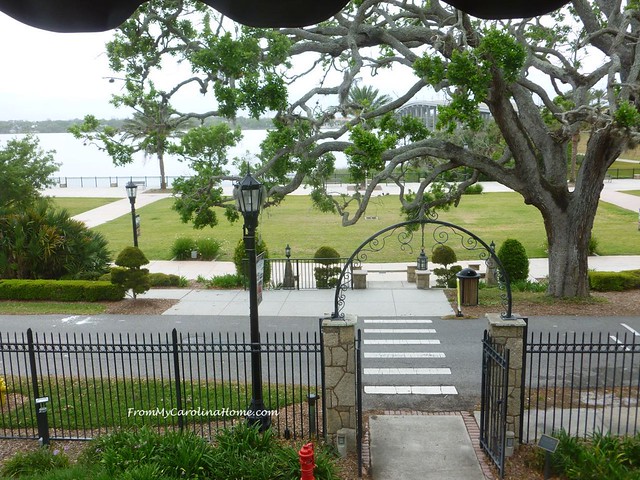 The third floor was dedicated to exhibits of Boy Scout memorabilia, and a costume exhibit. In a gallery on the first floor, art exhibits are shown, changing regularly. There was a photographic competition hanging while we visited. The house is used for all kinds of community center events, exercise classes, cooking classes, and events in the park grounds like the festival and run that was going on while we visited on Saturday.  We had to return on Monday to see the inside of the house and the grounds.  It is neat that the town has such an historic place still in active use. 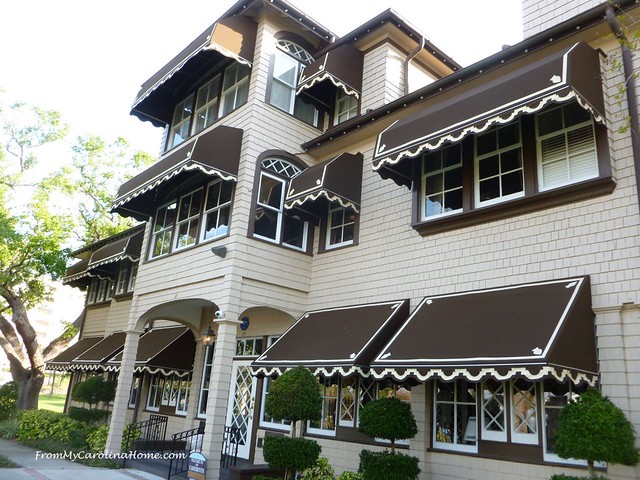 On Sunday, I’ll show you the grounds.  Update – click on Casement Waterfront.  Isn’t it fun to visit historic places?

Fat Quarter Shop’s Basic of the Month is 20% off Pat Bravo Basics!
If you’ve ever wanted to do affiliate links on your blog, Check out ShareASale.
Did you know, Amazon has an Outlet Store with huge bargains.