My mother in law is 99 years old, and has decided to start cleaning out her attic.  DH was there recently, as she is only 3 hours away near Atlanta, and was helping to pull boxes out for her.  She has a set of fine china that was given to her by her own mother-in-law some 60+ years ago.  The story was that it had been in the family since it was purchased in 1891 as a wedding gift by my husband’s great-grandfather for his bride.  None of the kids want this china, and she herself didn’t use it much after she got a new set of white china of her own. She wanted it sold to the replacements china store that sells vintage china so someone else might complete a set or replace a broken piece.  DH brought it home for me to look over and see about selling it.  The shapes on the covered dishes are just exquisite. 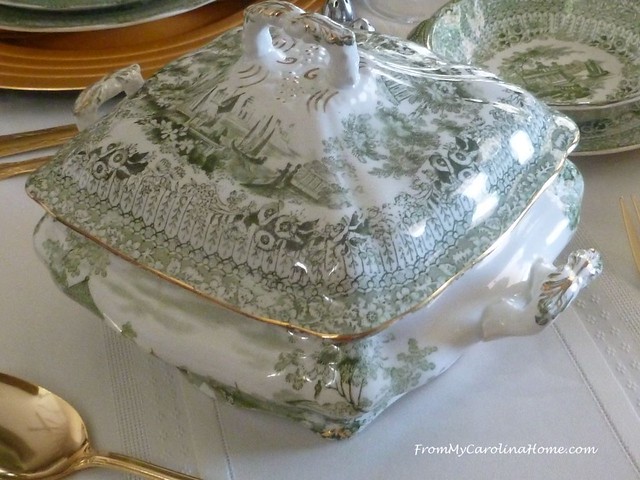 She would use a few of the serving pieces at holiday meals, but I only remember the place settings being used once for Thanksgiving in the 1970s.  I did remember that it was green, and I like green transferware better than any other color.   The paper that the china was wrapped in was so old and fragile, it fell apart as the pieces were lifted from the box.  I was naturally curious, and since I was the kid in school that cheered when a research paper was assigned while everyone else groaned, I began looking for information.  While there is a great deal about the early years of the Ridgway Potteries, and the succession of subsequent generations, very little is written about the family after the 1860s.  These pieces are marked England, which would have occurred in 1891 when the law changed and pieces imported to the US had to have the country of origin on them. 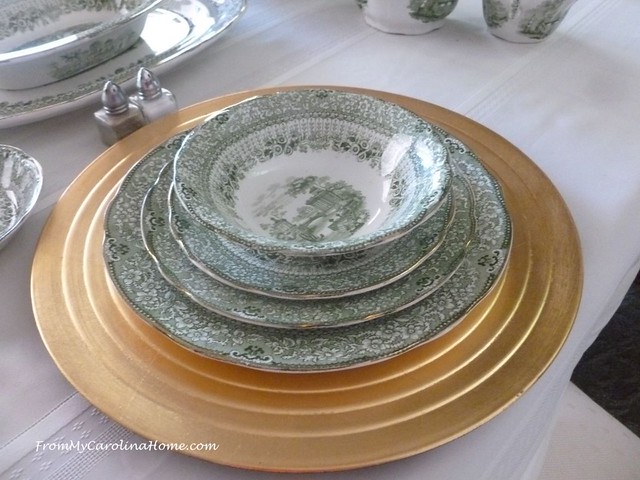 Two people in England were very helpful in finding out about this pattern.  Steve at The Potteries let me know that the pattern was made by Ridgways at the factory known as Bedford Works. The Ridgway family of potters and their various companies were in operation from 1802 to the mid 1960s.  Grecian Green was made by Ridgways between the 1890s and at the latest 1920 – the clue is in the use of the name ‘RIDGWAYS’ with the ’S’ at the end. 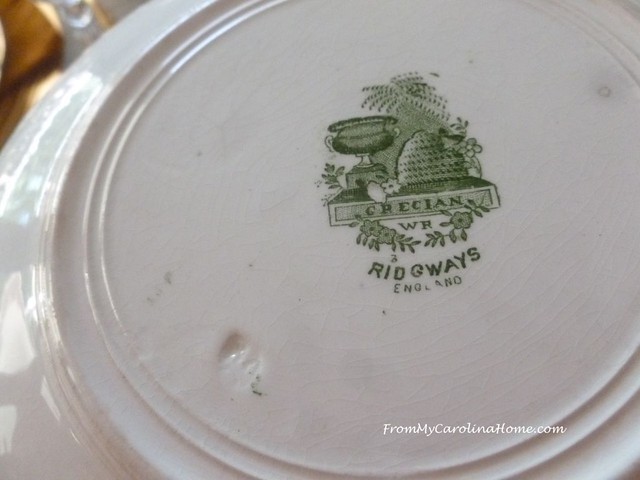 Angela Grant who maintains the website Ridgways Pattern Books said “Your service is interesting. The print set was originally introduced by William Ridgway at the Bell Works in the 1830s. When he went bankrupt for the second time in 1854 the contents of the Bell Works were sold off to the highest bidder in May 1855. The printing plates would appear to have been bought up by his son Edward John Ridgway who was in partnership as E J Ridgway & Abington at the Church Works down the road. In 1866 E J Ridgway moved his production to the then new Bedford Works. In 1879 the firm name was changed to Ridgways with an ‘s’ and that name continued until 1952. This firm brought a lot of the old patterns from the Church Works and the Bell Works back into production. They were not alone in this. There seems to have been a wave of nostalgia for the 1830s in the 1890s. And that was when your service was made.”  The scenes on each serving piece are different.  This is the small platter. 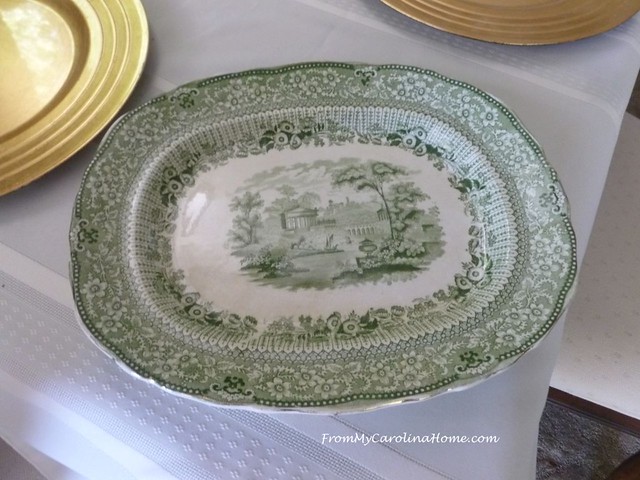 I also asked Angela about the insert in the butter dish. I was thinking that only the very rich could afford to have ice delivered, and perhaps it was to keep the butter above some ice chips. Angela wrote back “Your ‘butter dish’, if that is what it is, is something of a puzzle. I will admit I have seen nothing like it. It is possible the flat liner was used to cover crushed ice, and the butter was placed on it to keep cool. Alternatively it could have covered hot water if whatever was in there was required warm. Perhaps it was used both ways.” 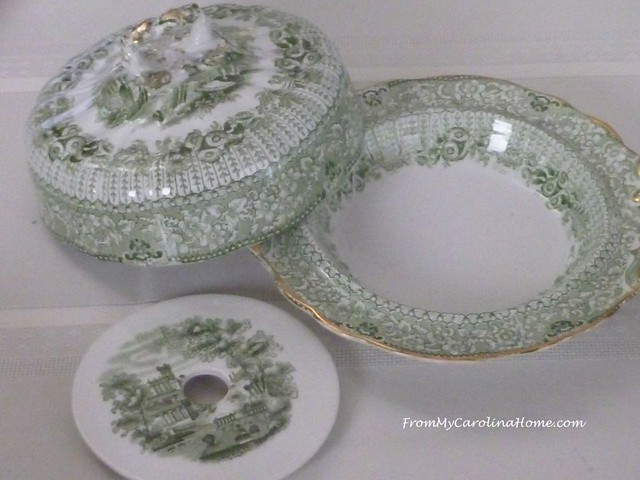 The soup/cereal bowls have a river scene. 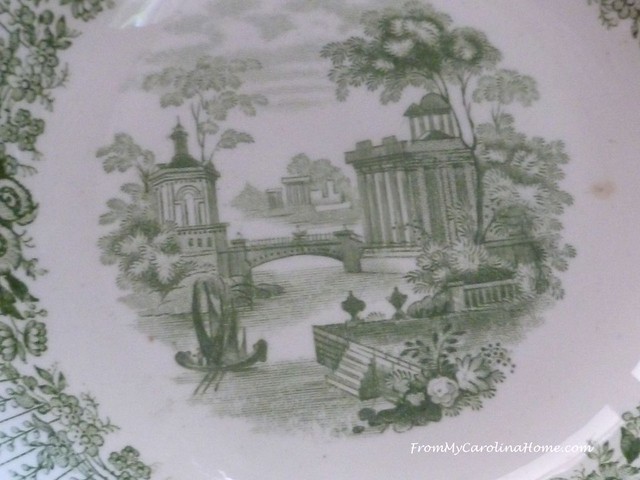 This large round platter would most likely have held a meat or fish course. 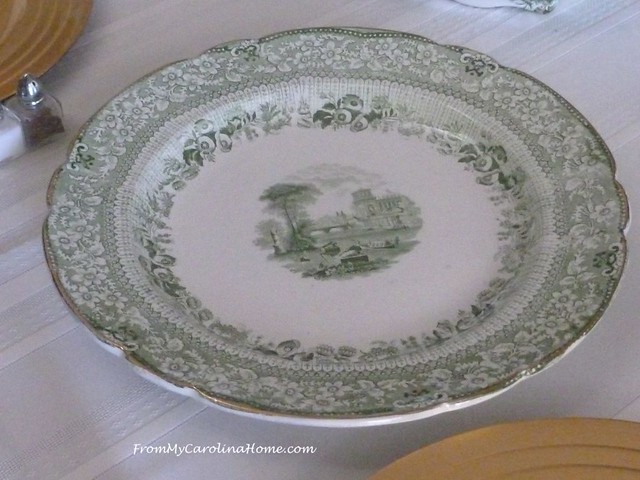 The size of the sugar bowl is huge.  Some of the gold edging is worn away. 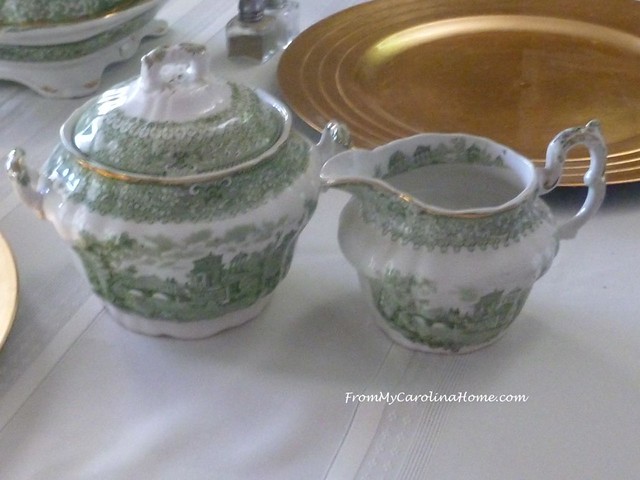 The delicate detail of the edge shows the gentle scallop edge and the floral design. 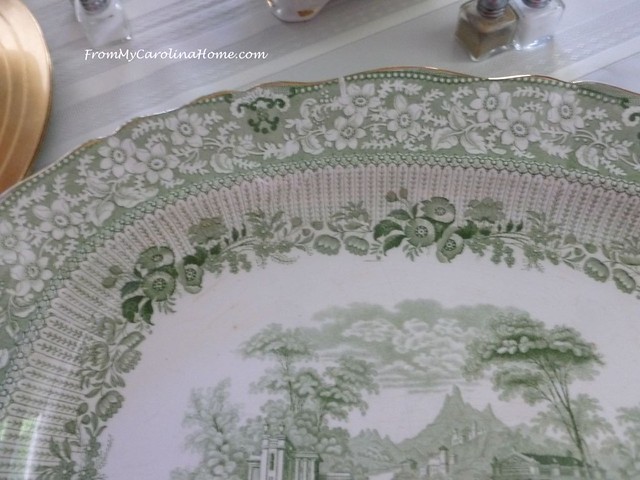 Place settings have five pieces, and there are six intact settings.  As is usual for the era, the dinner plates are smaller than we use today.  The gold edging is worn away in some spots, but the lovely shape of the scallop edges retain a grace of days gone by. 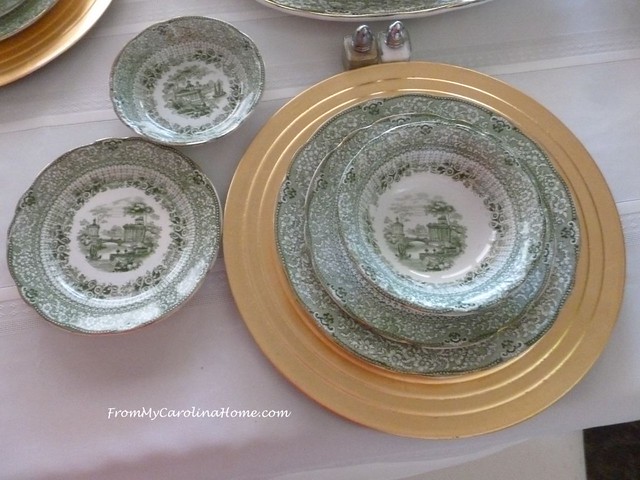 I place the settings on gold chargers and added goldtone flatware for a tablescape.  I had to stack the fruit bowls on the bread and butter plates for space. 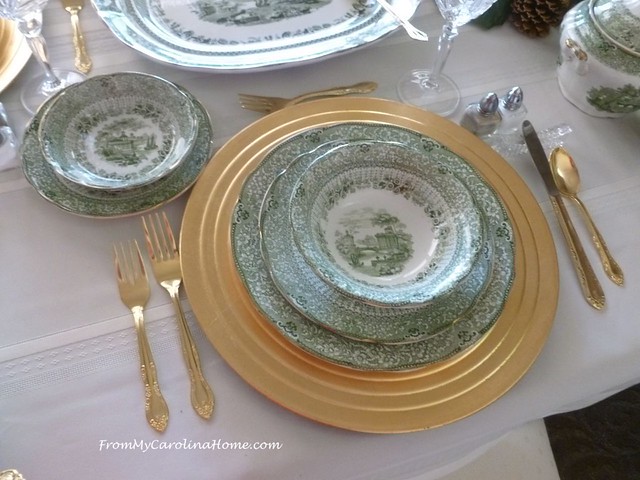 At the corners of the table, I placed more serving pieces.  This table is all about the china. 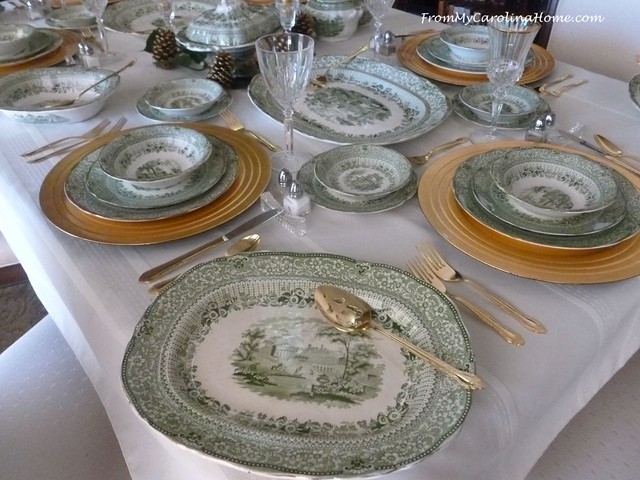 For the centerpiece, I placed the covered oval vegetable dish between two clear candlesticks with gold candles.  Rounding out the centerpiece are pine cones that I had spray painted gold. 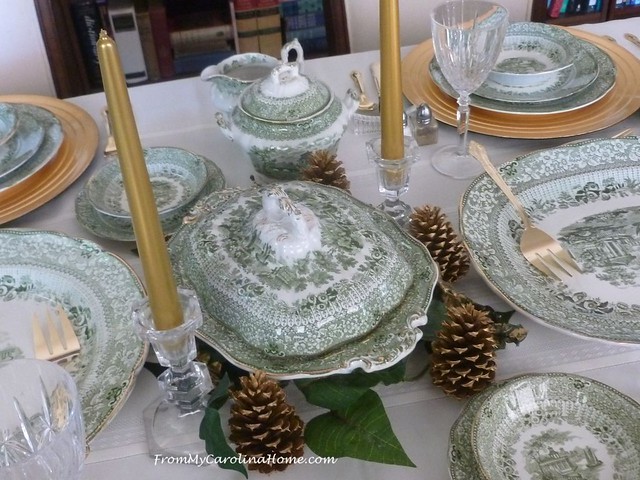 On either side are two platters, filling up the center of the table. 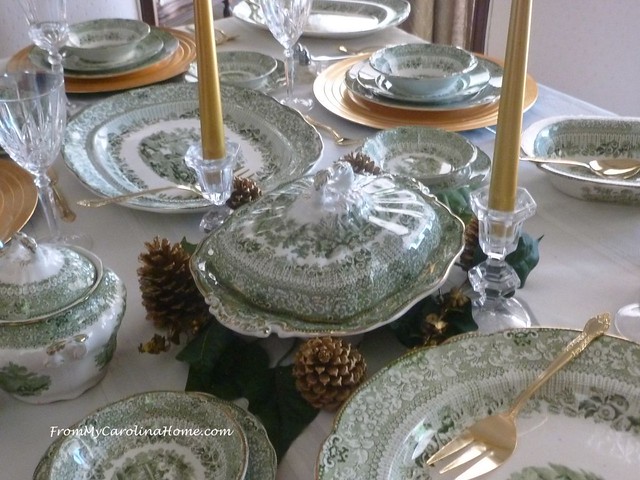 The butter dish graces one corner.  Wine glasses with gold rims are placed at each end of the table, with cut glass ones on the sides. 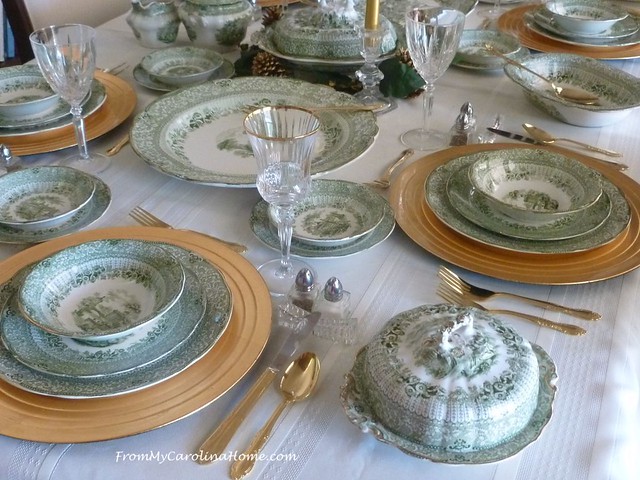 The square covered vegetable dish is placed on the other side. 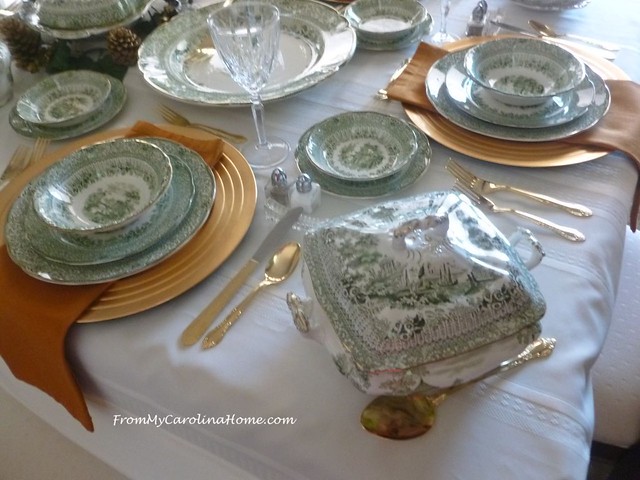 As befitting a more formal table of yesteryear, cut glass knife rests, individual salt and pepper shakers, and dessert forks are added to the settings. 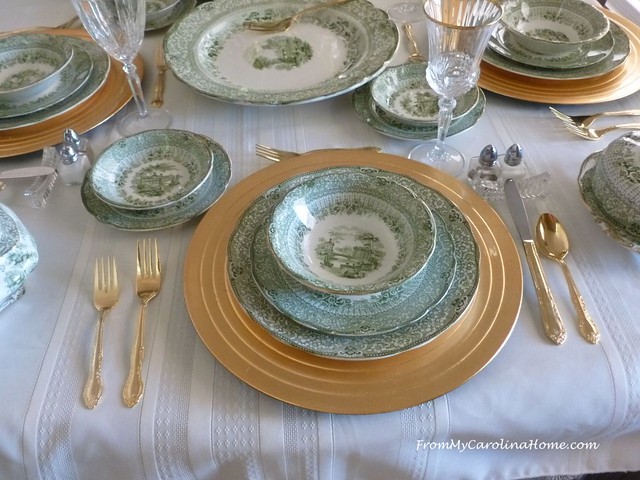 About now, with the table full, I realized there were no napkins on the table.  So I added gold ones between the plates and the dishes, as there was really not enough room to put them next to the forks. 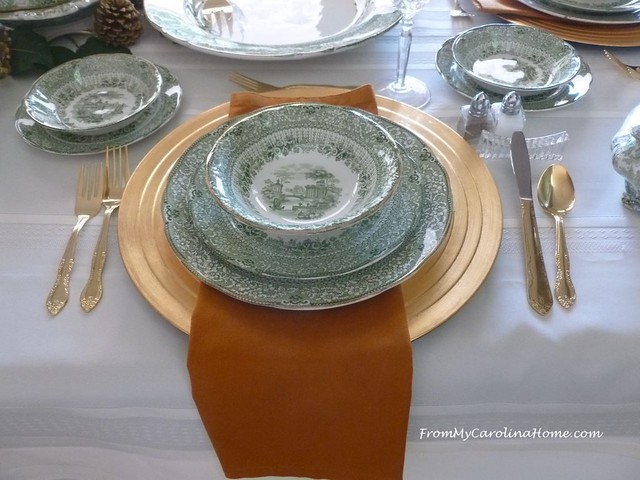 It is staying on the formal dining table for a bit, so I can enjoy it for just a little while before it is sold.  I am quite sure that if I wanted to keep it that my mother in law would give it too me, but I have too much china now.  And I agree with her, it should go to someone who has been looking for it for a while and needs replacement or additional pieces for a set they love. 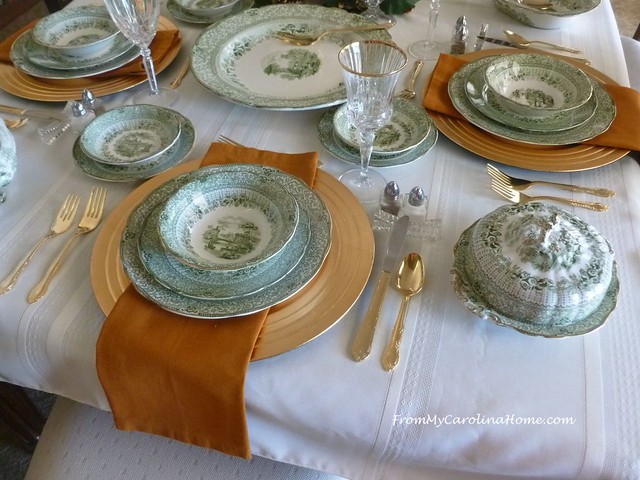 But, just for a bit, I think of having a Victorian style dinner.  Can’t you just see it?   All of the guests would be wearing Victorian style clothing, entertaining each other in the gentle art of conversation over a multi-course meal… 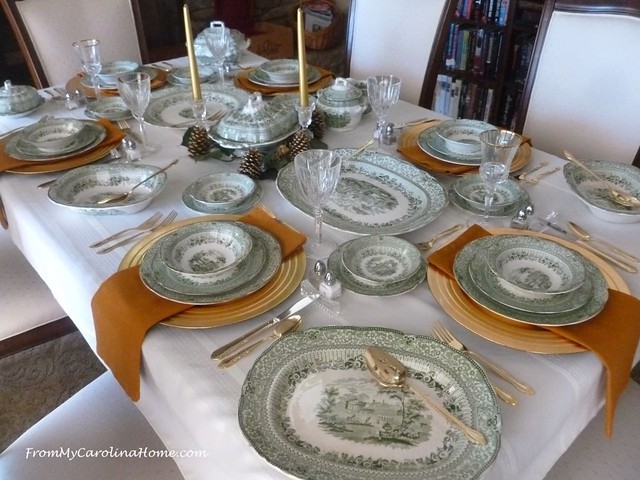 that someone else cooks and cleans up, LOL!!!!! 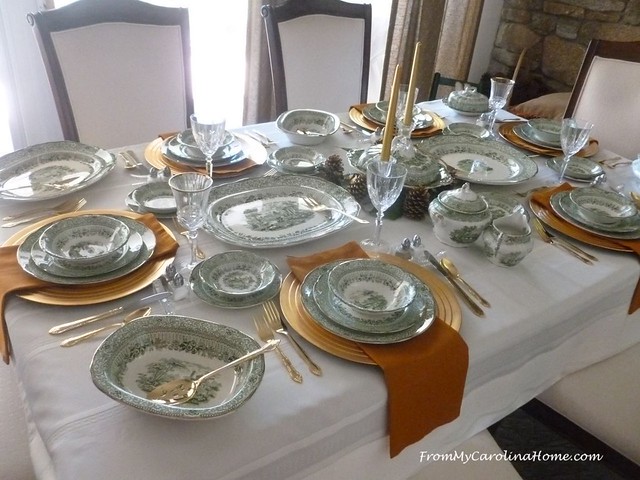 I may sneak out one covered dish to keep, after all.  We’ll see.  Do you have family heirlooms of china or dishes?

47 thoughts on “A Tablescape of History”