The garden continues to have a show of pretty flowers and interesting critters.  It is a joy to have a succession of flowers that bloom in the later part of summer.  I love this white iris, a late bloomer that surprises me every year.  This year it gave us five beautiful blooms over more than a week. 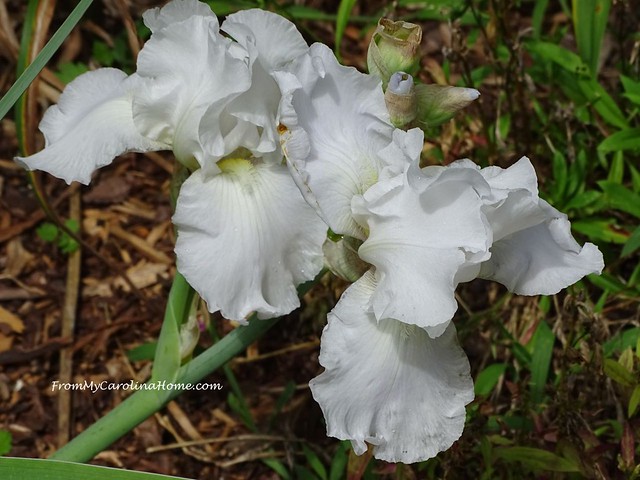 I was just barely able to catch a photo of this most unusual hummingbird with a black head.  I’ve not seen anything like it before.  It isn’t a shadow, its head was actually very dark on top and underneath, with a white ring around its neck.  Perhaps it is a juvenile and the dark areas will lighten to the common green as it gets older. 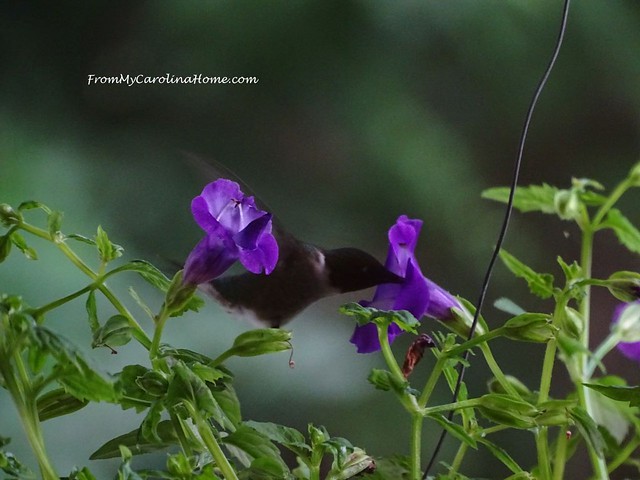 On another day, I caught this female ruby throated hummingbird.  We have two females and one male that regularly visit. 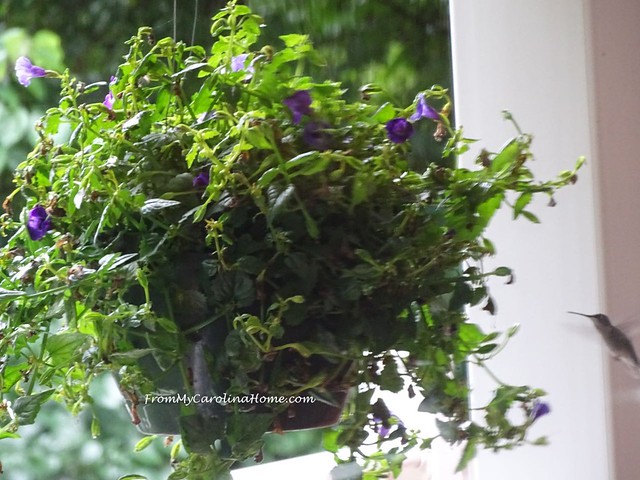 The hydrangeas bloomed beautifully all summer, giving us a number of blooms to cut for the table. 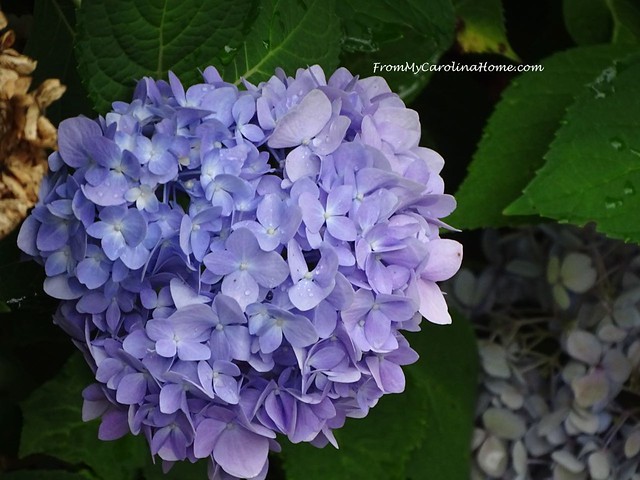 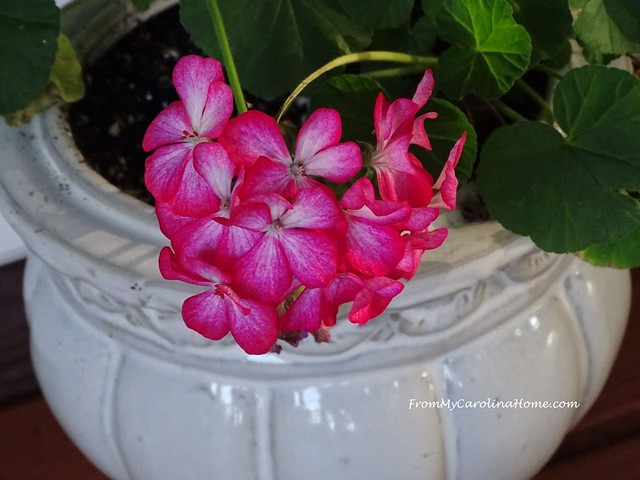 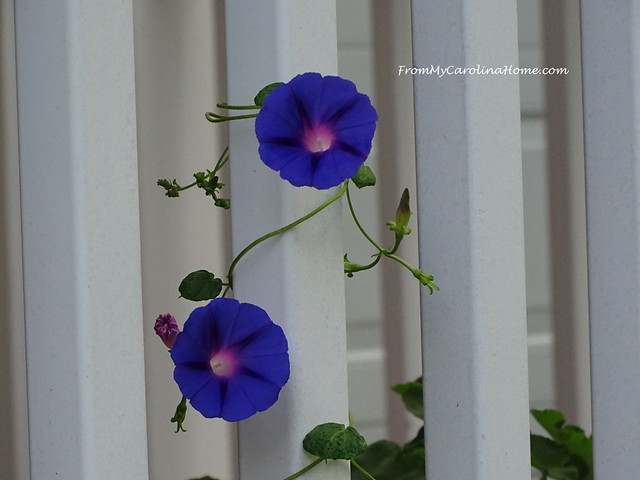 On the feeder, a chickadee shares the seed with a bunch of goldfinches. 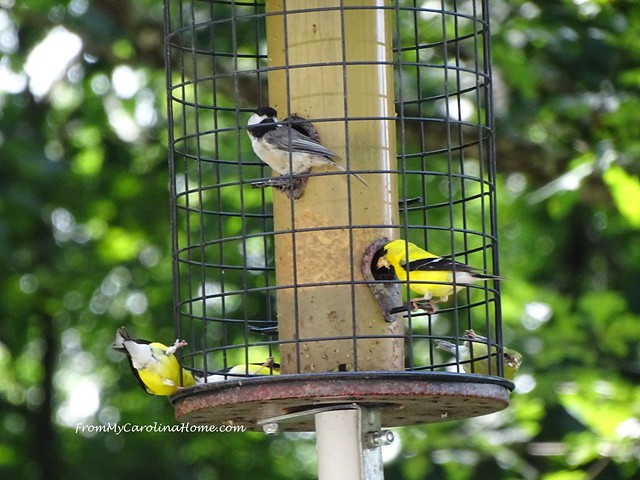 The bright yellow birds look so pretty in the green trees. 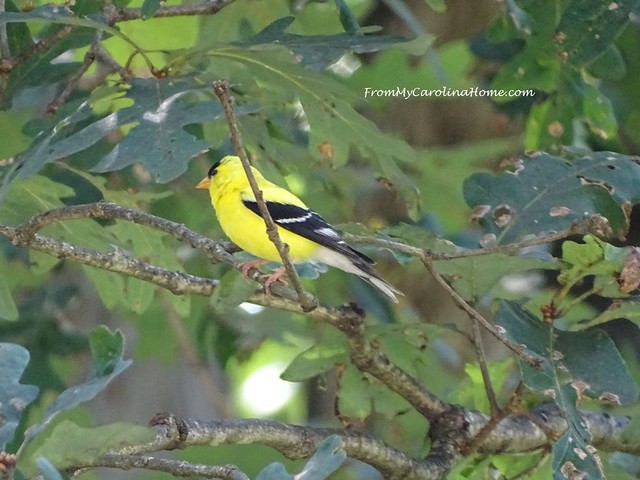 Out in the vegetable area, two squash plants bloomed profusely, but I have yet to have a single squash.  Not one.  I think the combination of heat and too much rain have stunted the growth.  Oh, the one spaghetti squash rotted from the critter nibbles, so I pruned it off, hoping for another one. 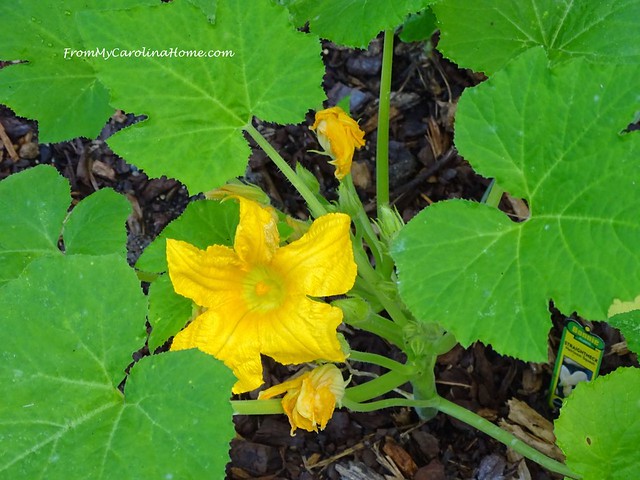 The Better Boy tomato on the veranda was doing well until the heat and the rain got to be too much.  DH moved it under the eve so it wouldn’t get so much water as the rain was pouring down every afternoon and turning the leaves yellow from overwatering. 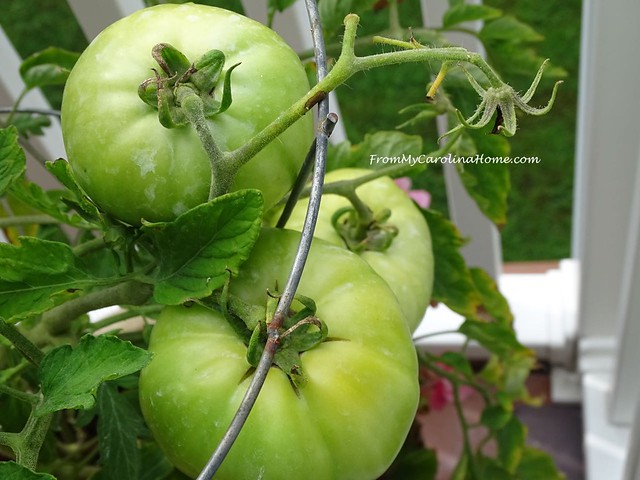 I brought the biggest ones inside and let them ripen on the kitchen windowsill.  I got this photo, then they turned a deep red.  We ate them before I remembered to take another photo. 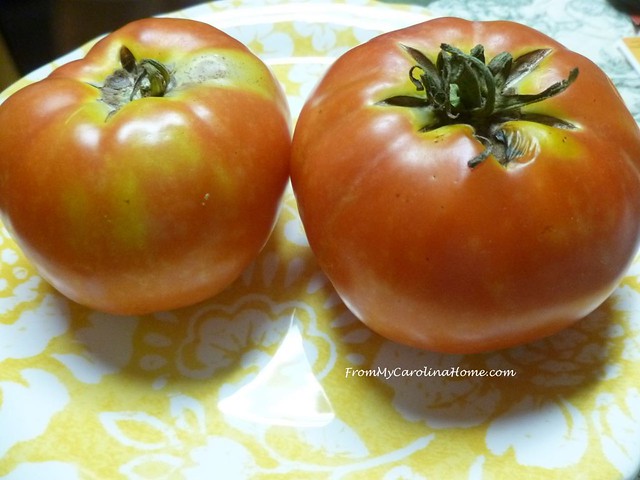 Early in the month, one yellow gladiola gave us a striking bloom.  It looked lovely with the hydrangeas.  I had to cut it and bring it inside as the rain broke the stem. 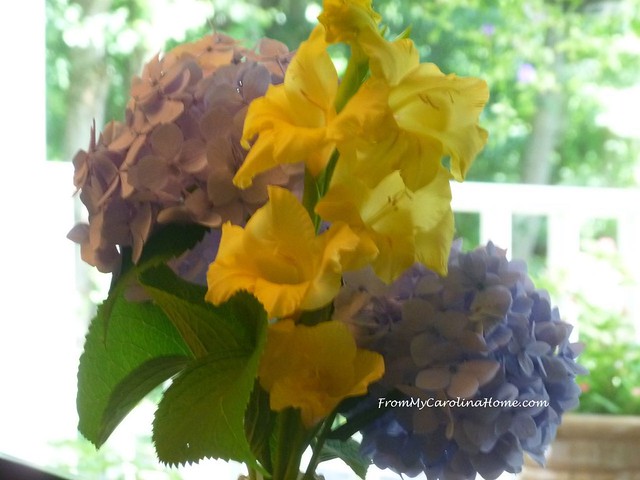 Another critter visitor, this is a walking stick.  Seems like we get one of these on the veranda every year about this time.  It is actually hanging upside down, its head is at the bottom. 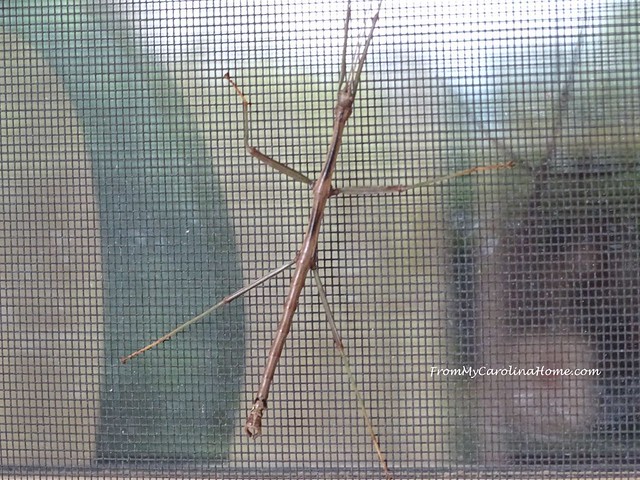 The torenias continue to bloom profusely, attracting the hummingbirds. 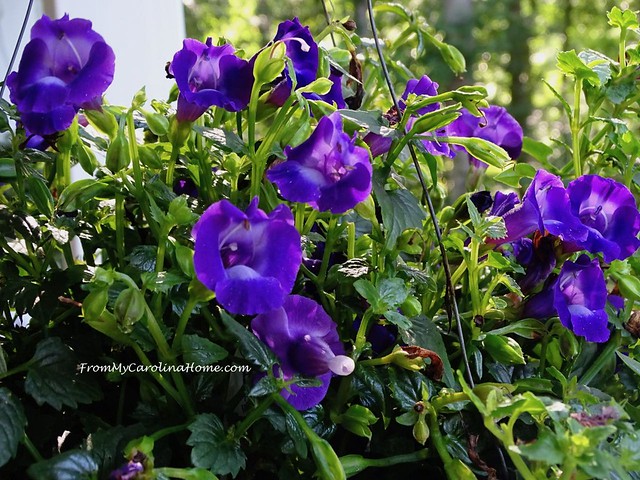 The yellow one is spilling out of its pot all over.  I have considered entering this one in the fair too, but I haven’t decided if I want to enter that category this year. 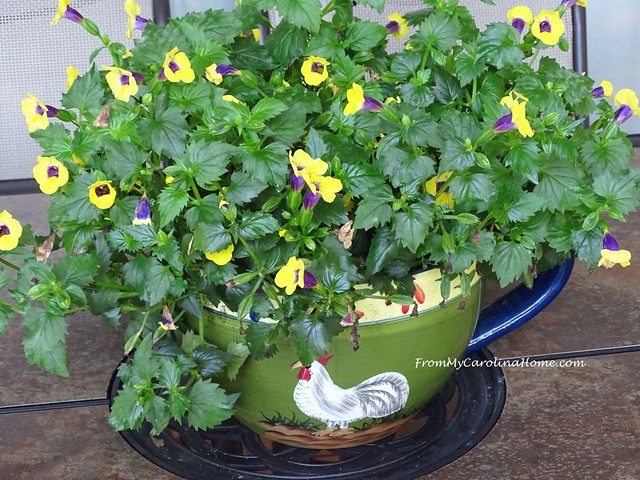 One of my dear friends gave me a coneflower plant last year, which gave us one bloom.  It must be happy, as this year there were three blooms.  Such a pretty vibrant pink! 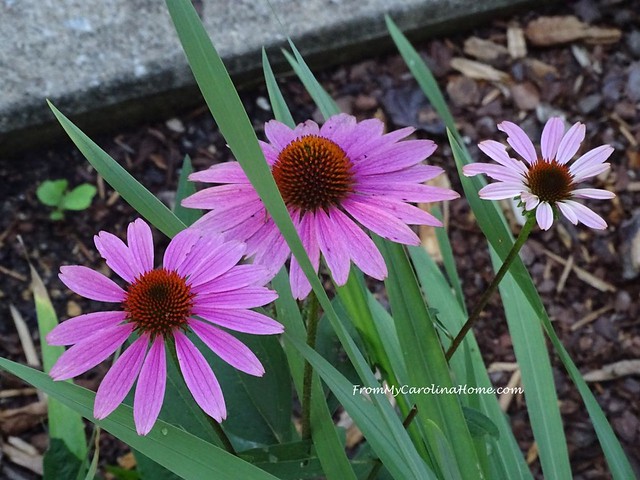 The cleome is still doing well too.  I think I’ll have some seeds to scatter in the meadow and the part of the circle inside the driveway that doesn’t seem to be good for the bulbs. 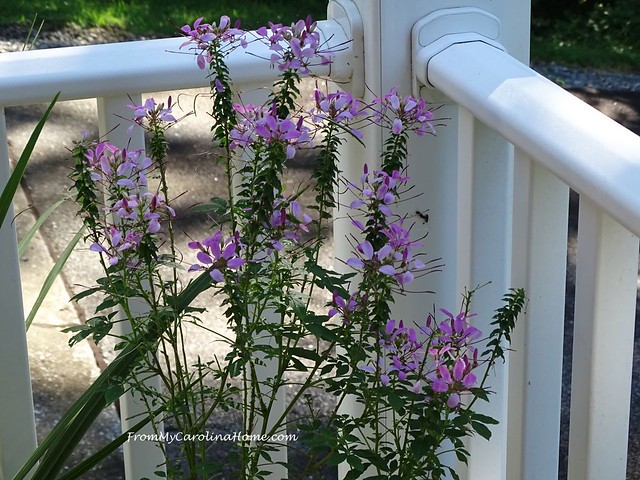 We have a few little skinks running around, some really tiny.  This one is about half grown.  There is one really big one that may be a parent. 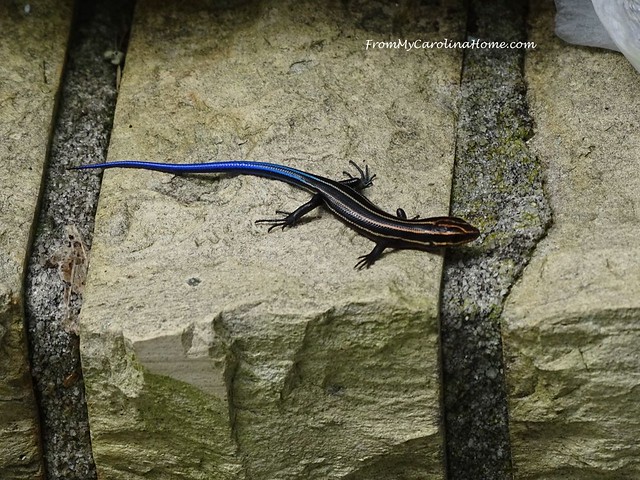 Our regularly visiting turkey comes by several times a week for a handout.  He gets about 1/3 slice of whole grain bread, in little bites.   He does the cluck-purr thing that is so fun to hear. 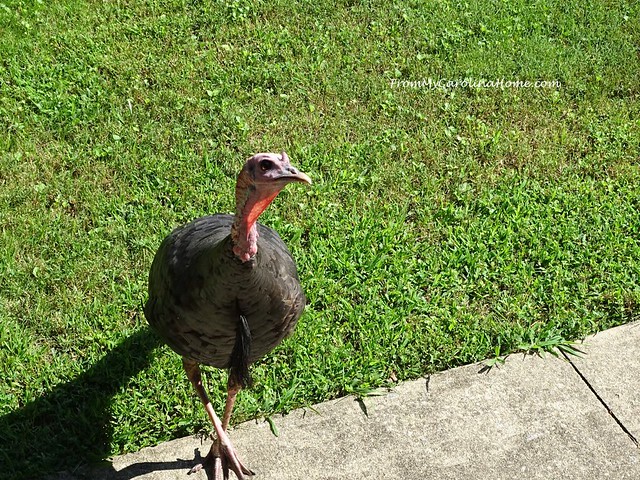 This is a curcuma ginger plant, another gift from a friend. The flowers are really unusual, and I think it is a member of the bromeliad family.  The card that came with it says it can take the heat.  But, it isn’t hardy, growing best in zones south of here, so I’ll bring it inside for the winter and see if I can keep it alive. 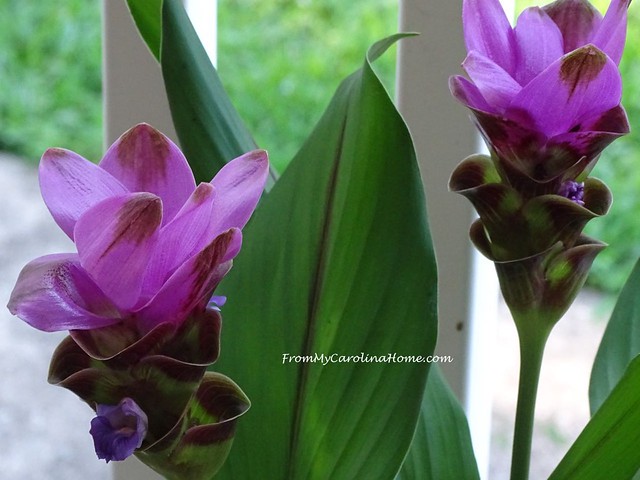 The bidens is spilling out all over the birdcage, with lots of yellow flowers trailing down.  I’ve had so many nice comments on this birdcage upcycle as people come over to visit. 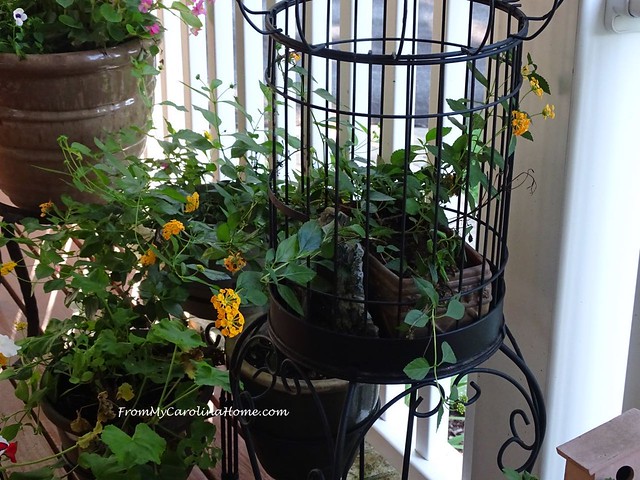 So, the flowers continue their blooming, but the heat is still here.  Evenings are cooling off, and the mornings are lovely, but the humidity hangs on.  It is hard to find a time to go hiking, but we have done a few walks in town and at Connemara.  We are going to try to get to the Arboretum soon, not only to walk on the trails for exercise, but also to see the fiber art exhibit.  Last night we stretched out on top of the garage on a quilt to see the Perseid Meteors.   We only saw a couple of brief streaks as it was very hazy, but I think we may try again tonight.  We did see Mars and Saturn.

What’s blooming in your garden?  Did you see any of the meteor shower?

26 thoughts on “August in the Garden”