We had our second sew day to work on the patriotic quilt, five more friends sewing on my machines, pressing seams, cutting sashing and cornerstones, and making binding.  Of course, we had a pot luck lunch too, and did take a nice break to enjoy a meal.  I decided to do the Nine Patch Star on the first sew day, but didn’t show it to you then. I had worked on the Classic and Vintage Fat Quarter Shop design for a patriotic quilt, and they have now pushed their reveal back to January.   So, I went with the Nine Patch Star for this community quilt.  For the first sew day, I had cut fabrics for several hours the day before so we could hit the ground running. For this patriotic version, the center unit has a star print for the center, surrounded by blue scraps. 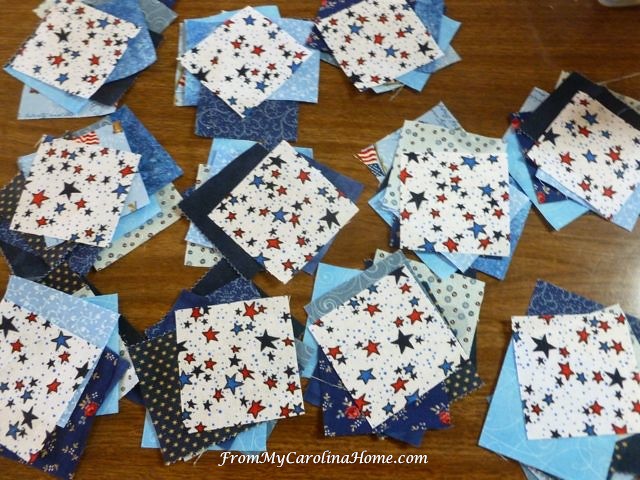 Then the flying geese units were done in scrappy reds. 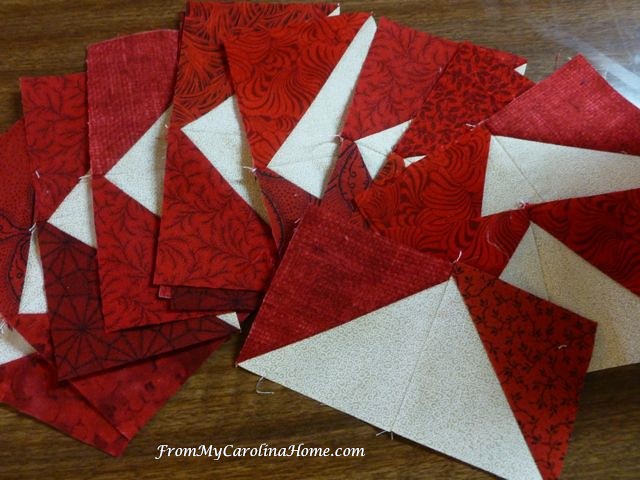 We pressed those seams open to reduce bulk, and make it easy to see the point for sewing the next seam. 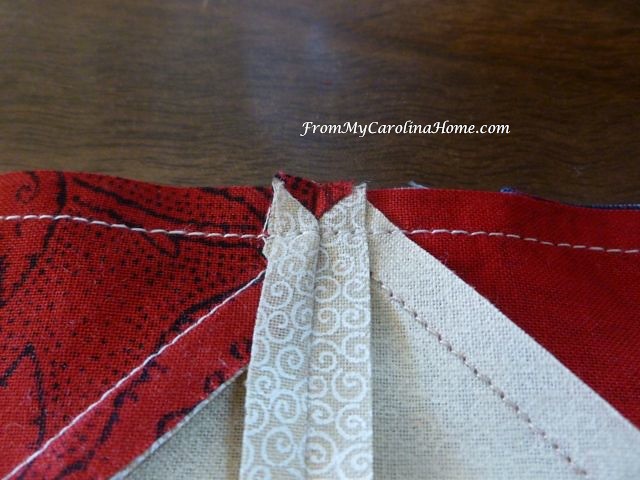 After the previous sew day, we had all the nine patch units made, all the flying geese units made, and all the squares cut.  On this day, we needed to finish assembly of the 20 blocks, add sashing and cornerstones, and complete the center section of the quilt top. Here we are set up for day two of sewing. 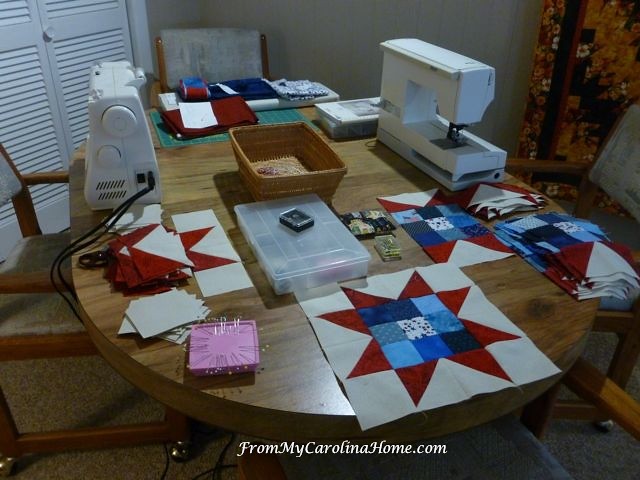 The units were all completed, and then the blocks assembled. 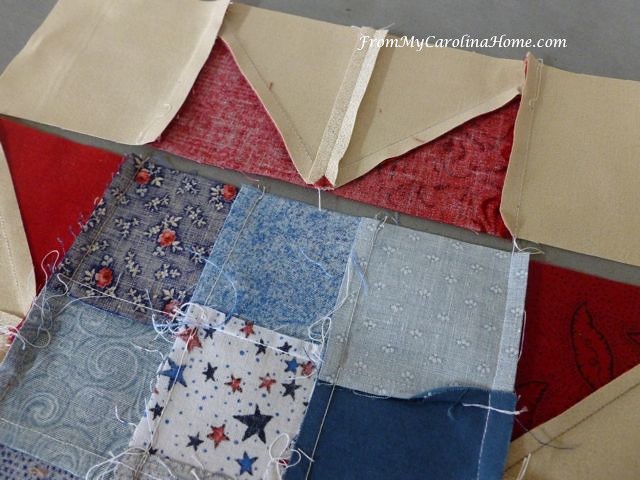 Time out for lunch!  We did a Mexican theme pot luck lunch, with a Christmas Tablescape. The salad courses were lined up on the counter, my guacamole was in the center. 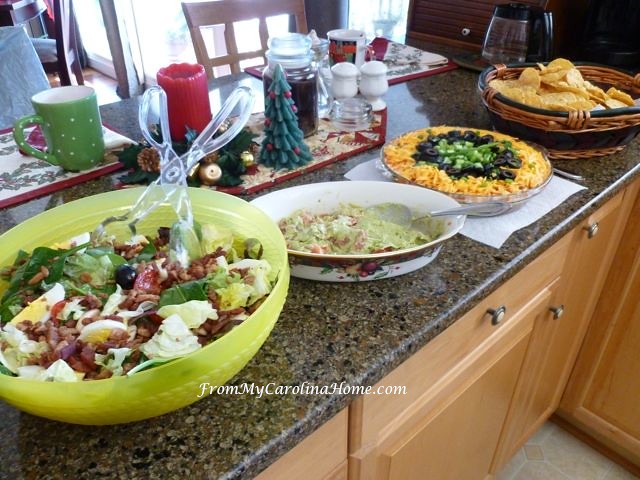 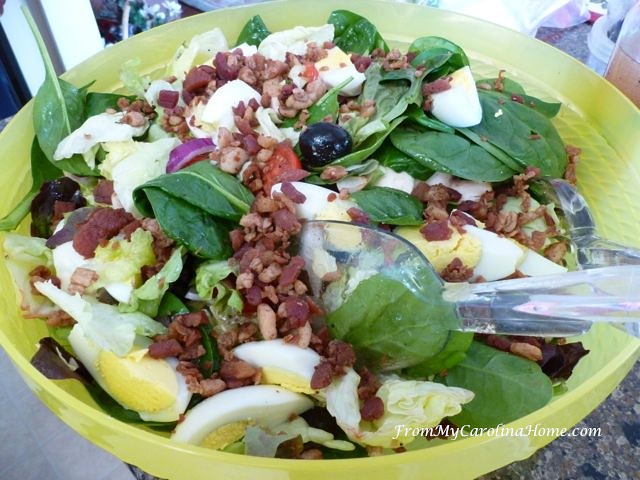 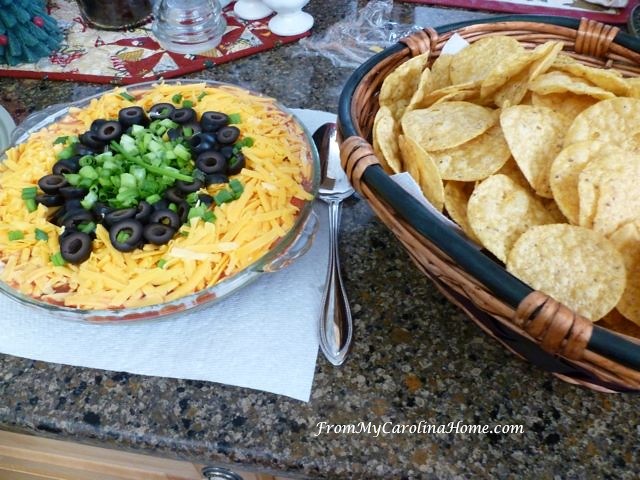 Then we moved to the stove for the Mexican Chicken Enchilada casserole in a slow cooker. 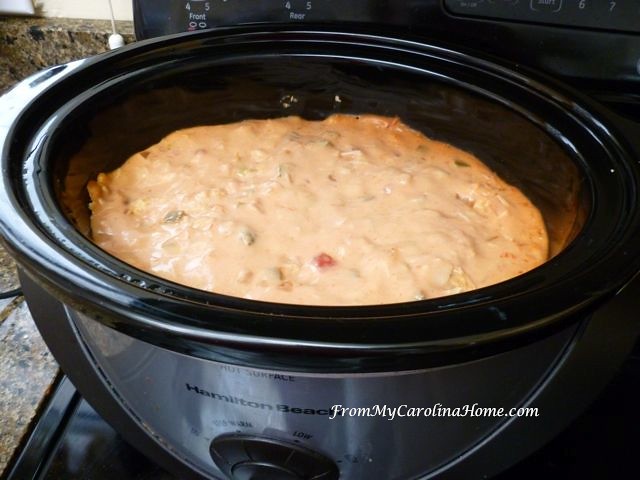 Taco soup was in another pot, made with ground beef and corn with lots of spice that was so thick it was more like chili.  We ladled it into our bowls, filled up plates, and sat at the dining table for a leisurely lunch with lots of chat time. This was my plate.  I’ll show you the tablescape on Wednesday. 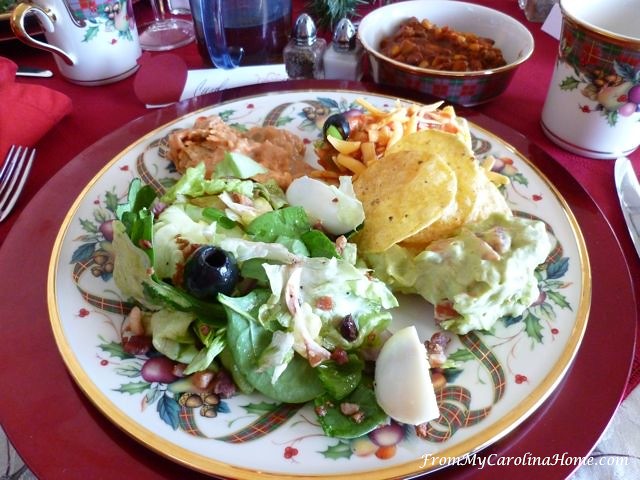 They laughed at me as I took a picture of another full plate.  Seconds were encouraged, and taken advantage of! 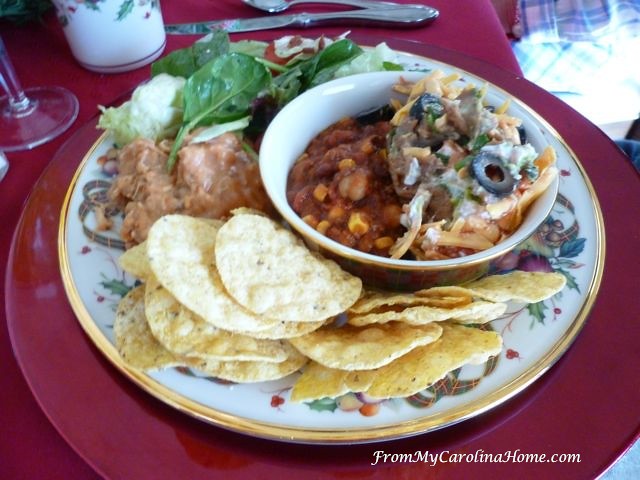 Stuffed too full for dessert right away, we went back to the basement for more sewing. We cut sashing strips, 2-1/2-inches x 12-1/2-inches. Cornerstones of the same star print were placed between the sashings.  The top was constructed in two big pieces.  When we had all 20 blocks made, we put sashings on two sides of each block.  The blocks were sewn into rows, and two large sections were done. 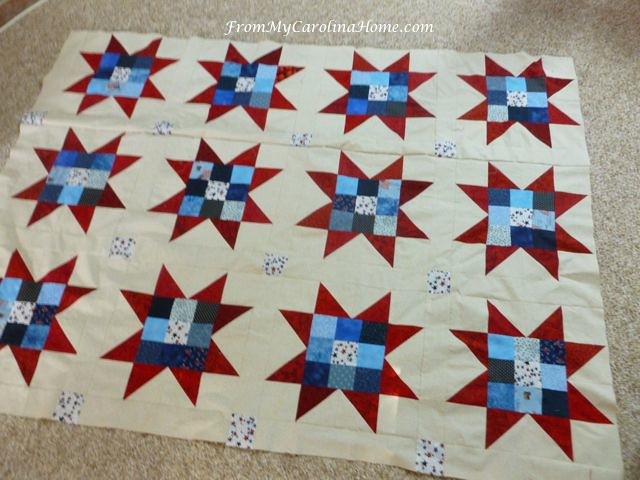 Then it was time for dessert, Chocolate on Chocolate. It was a happy thing that the Christmas sprinkles were also the colors of the Mexican flag, after all, there is a lot of chocolate in Mexican cooking. Chocolate chunk brownies, frosted with dark chocolate ganache and sprinkles left everyone with a sweet taste. 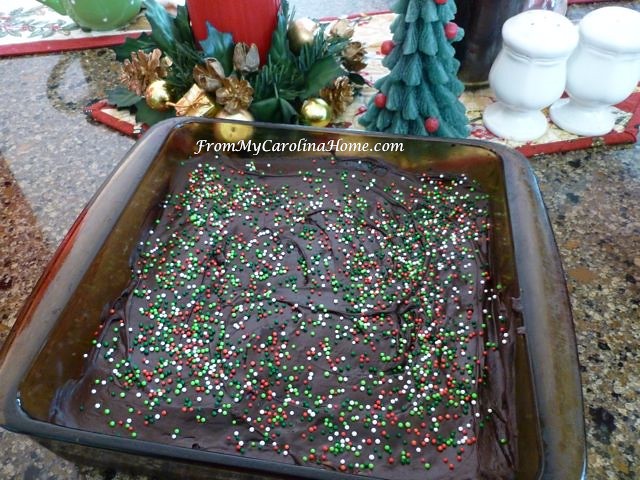 Every dessert looks yummy on a Christmas plate, right? 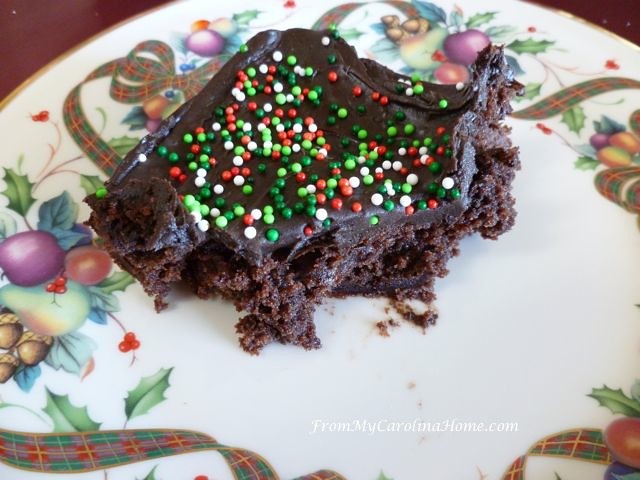 Back to sewing, the final assembly meant joining the two large pieces, then adding the last two edges of sashings, and the center of the top is done.  We counted it up, and so far with 10 quilters working in five different machines over two days plus the cutting time, we have 70 quilter-hours in this quilt so far.  Cutting, marking, pressing, sewing, and ripping out some bad seams here and there really adds up. 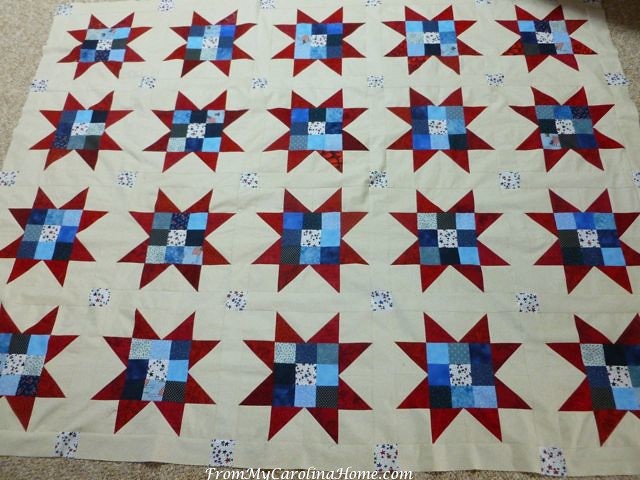 At this point it is still not large enough for Quilts of Valor, right now it is 59 x 72 inches. So I will add a scrappy border made during the first sew day, along with a solid red border on the outside edge to bring it over the minimum size of 60 x 80.  I’ll show you those steps soon, when I get to them. I don’t expect to finish this quilt before Christmas, there is too much going on this month.  The block pattern is the same as the Christmas Quilt Along from yesterday.  I’ll have a pdf for you with both sizes later in the quilt along.  I just got three new pantographs for quilting too and I cannot wait to try them out!

What do you think of our Sew Day and Pot Luck?  Do you think you might try this with some of your sewing friends?

Fat Quarter Shop December Basic of the Month is Riley Blake Ginghams! Thank you for using my affiliate links! 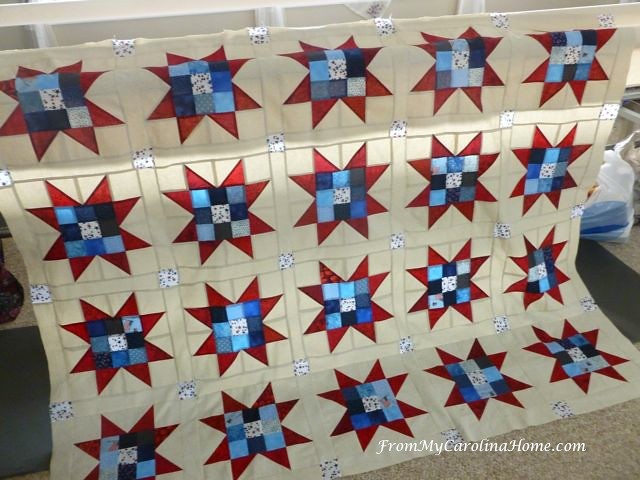