Orchids are such beautiful flowers, so much variety in their colors and shape from simple to ruffled, single and double blooms, pure white to exotic two or more color varieties.  My gardening calendar recommends orchids for January blooms.  This must be a common idea because the local grocery store floral department has dozens of them in full bloom.  If you are an orchid fan, a visit to the Biltmore House gardens should include a walk through the Orchid greenhouse. This lovely ruffled, lavendar beauty was there on my last visit.  I am trying to learn the difference between a cattleya from a cymbidium, but no guarantees that I got all these right, LOL!!  I think this one is a cattleya variety. 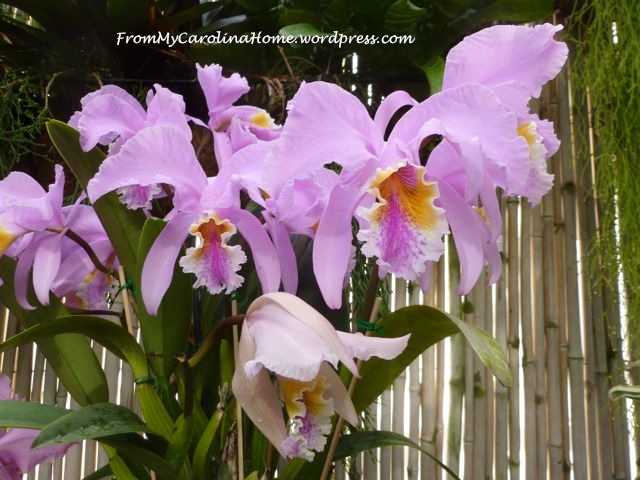 I think the pretty pink striped orchid with the solid pink lip is a phalaenopsis variety. 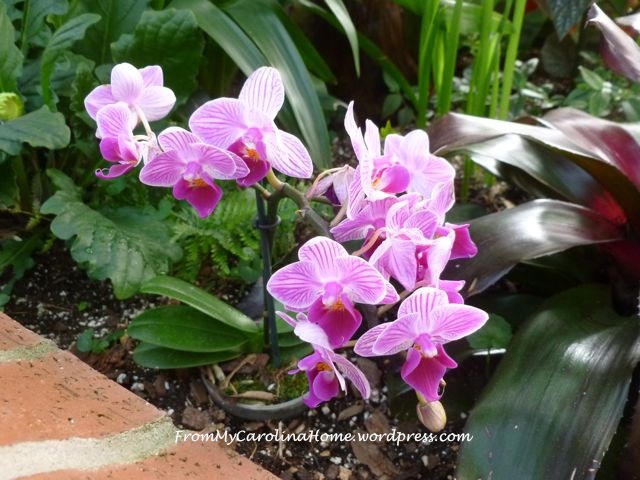 This apricot orchid with stripes has an unusual shape to the lip and column. 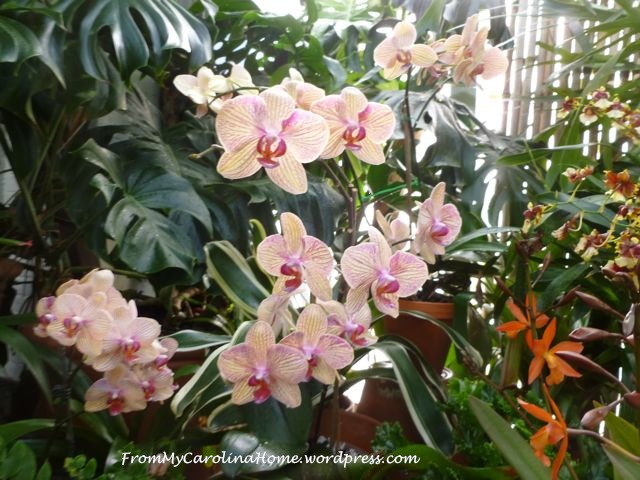 The lady slipper appearance of this gorgeous green orchid with a striped green and white septal has to be a Paphiopedilum. (Say that three times real fast, LOL!) 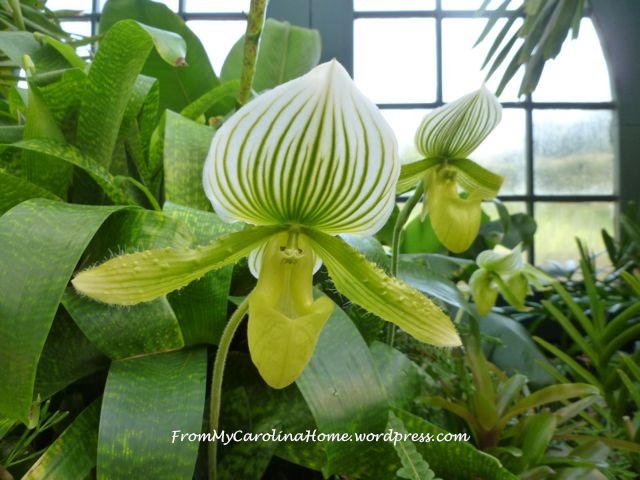 I am guessing that this pink beauty is an Odontoglossum, going on the ruffled petals and septal, and the arrangement of the solid pink lip and golden color column. 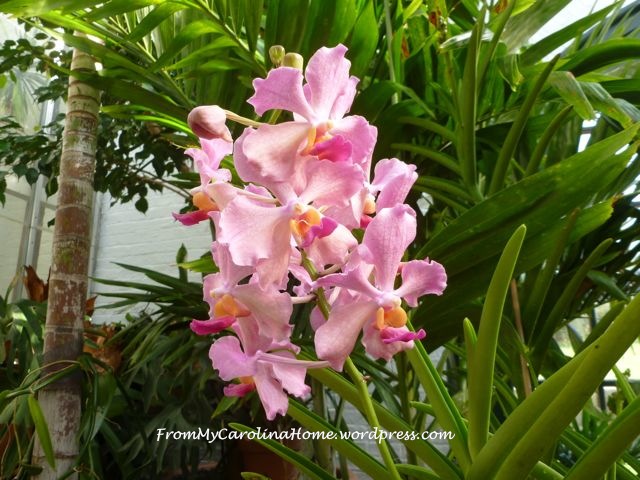 About six years ago, I was given an orchid in full bloom. Those blooms lasted a good six weeks, then slowly died off. Since then it has sat with the same leaves, not really growing. This past summer when it was much warmer and more humid than usual, I put it outside for a bit, knowing these are mostly tropical plants. Well, that did something because the roots started growing, and it put out two new leaves. As I lifted out the liner to empty the excess water, I noticed that they were coming through the bottom. So, I thought I should repot it. After months of procrastination, I did get to it last week during one of the warmer days. 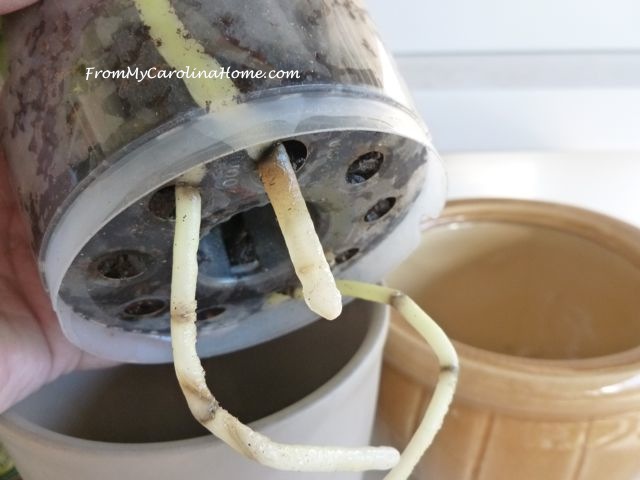 Of course, I knew nothing about repotting orchids, but a search on the internet and a bit of wisdom from the garden center provided guidance. I got some orchid potting mix at the garden center. They take a special growing medium of porous bark-like material that will absorb water. 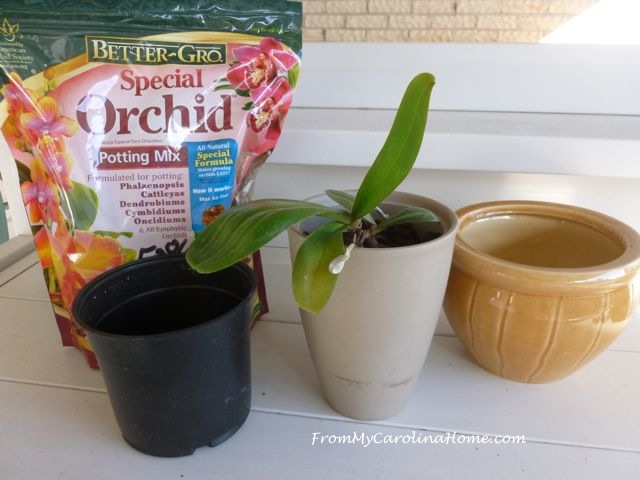 Pour out the old mix and discard. The bits have nutrients so the plant can be fed as the roots attach, so you don’t want to reuse the old stuff.  I had to pick off a few remaining bits that the plant was attached to. 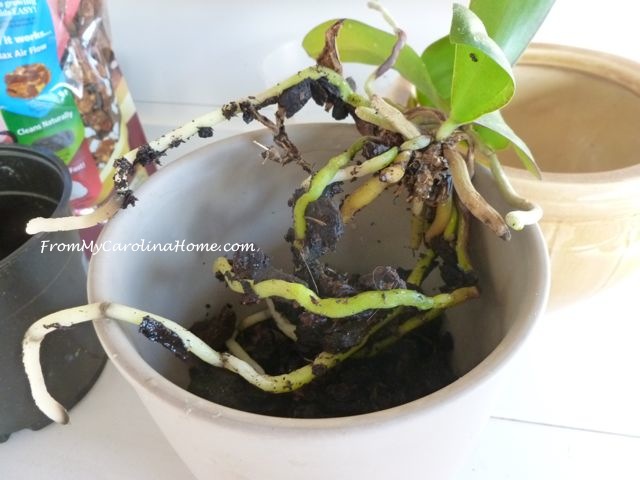 Trim the dead or damaged roots. One of the really long roots that was growing through the bottom of the pot had a damaged section at the top. It was so damaged, that I just cut it off.  I threw it out, and now am wondering if I should have kept it to propagate a new plant.  Ah well. 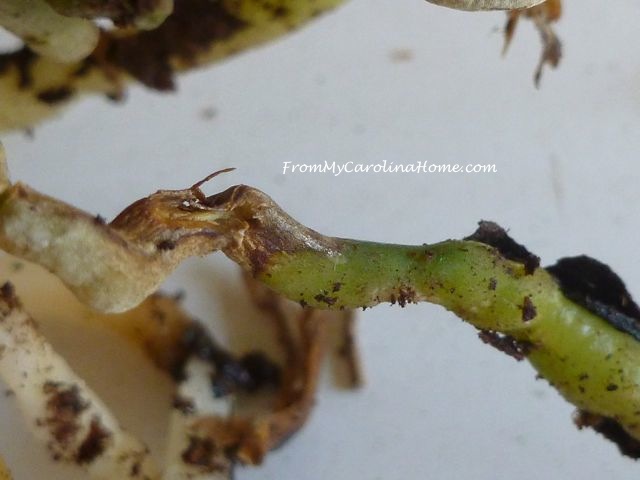 Here it looks like I might have been able to divide this plant into two plants. But since I have enough trouble with one plant, I left it alone. 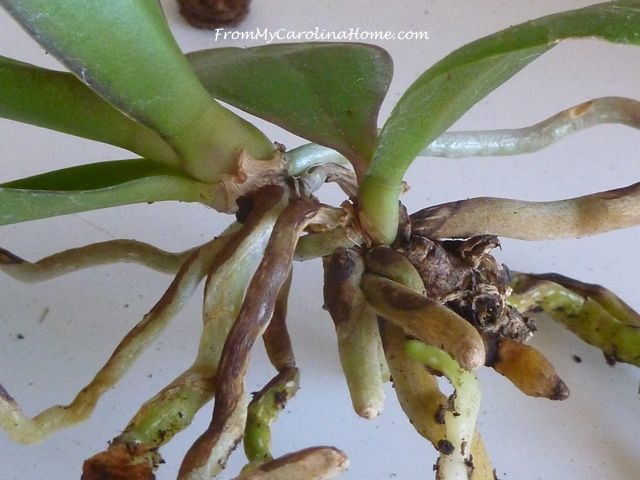 I placed it in a new wider and larger plastic liner pot, with bottom of the leaves level with the top of the pot. 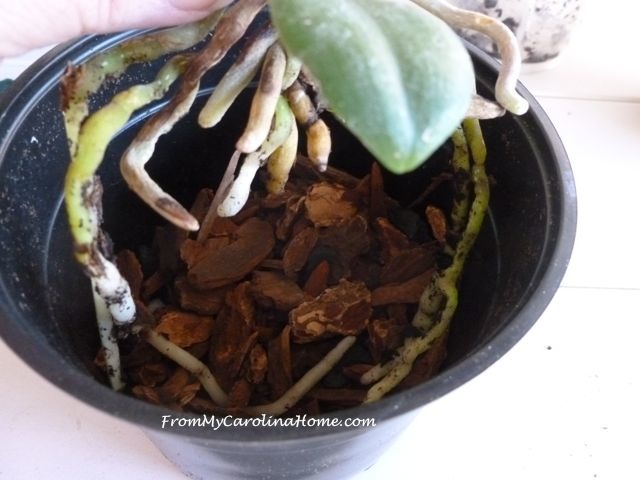 Fill in the spaces with more growing mix. Resist the urge to press it into place, this isn’t soil and will damage the plant. 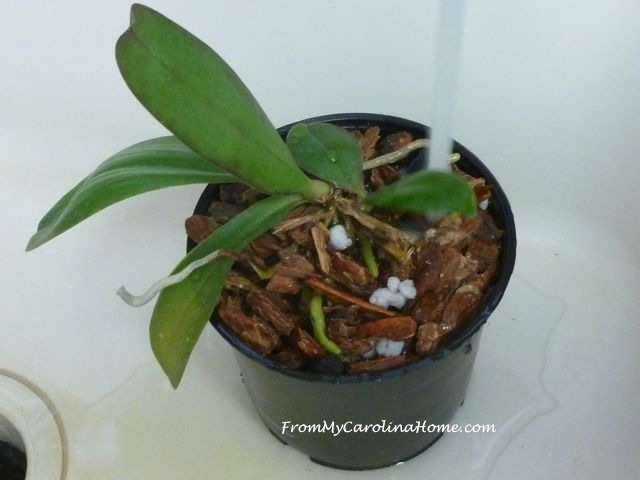 Then, the liner is placed into a decorative pot I found at the thrift store last week. Perfect size!  I am fairly sure this one is a Phalaenopsis, due to the wide leaves with a crease in the middle.  If I remember right, it had a white flower with a pink lip. 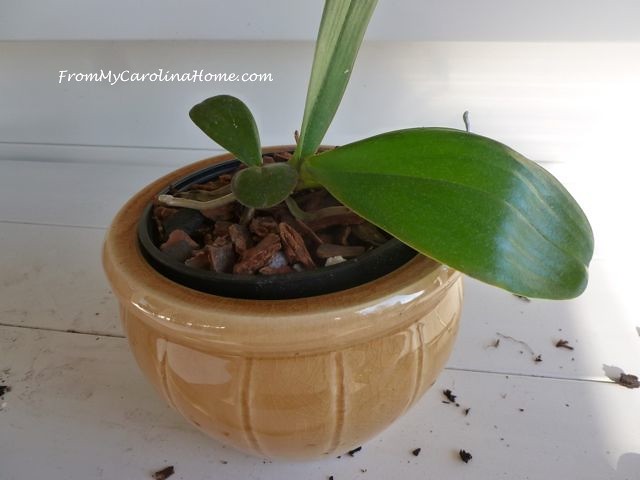 I watered it well, allowing the excess to drain off, and placed it back into the decorative pot. I bought a little mister at the store to feed it with. The mister will not provide humidity, that will be from a tray of water set nearby, but it will be used once a week with a very weak solution of plant food. I’ll be interested to see if these little changes will result in blooms.  I’ve been keeping it in the bathroom where the overall humidity is higher than any other room in the house, but the light level is lower there due to the north facing window.  So, I am going to try it in the kitchen for a while. 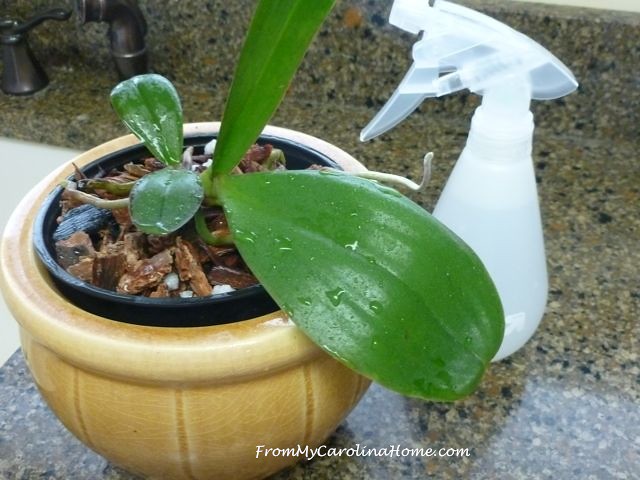 I have more flowers to show you, as I tend to take pictures of beautiful flowers a lot.  Last year when we went to Wilmington, the hotel had orchids all over the place. 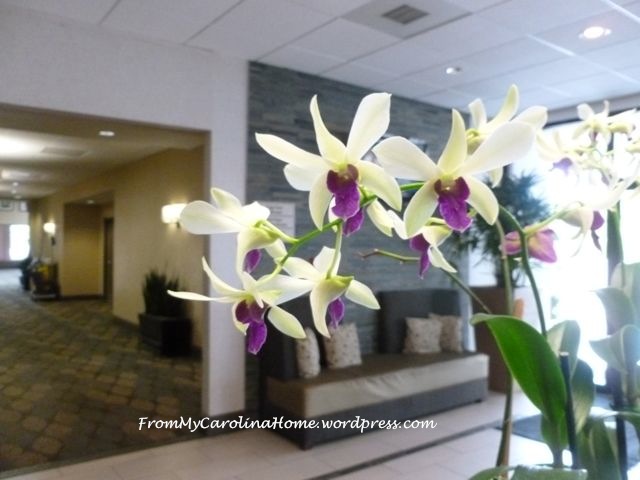 Red spotted Phalaenopsis was growing near the door. 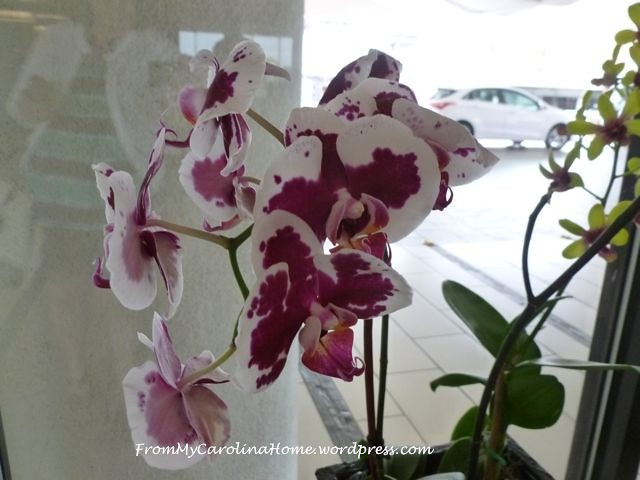 This one had green petals and septal with a pink throat and lip, very unusual coloring! 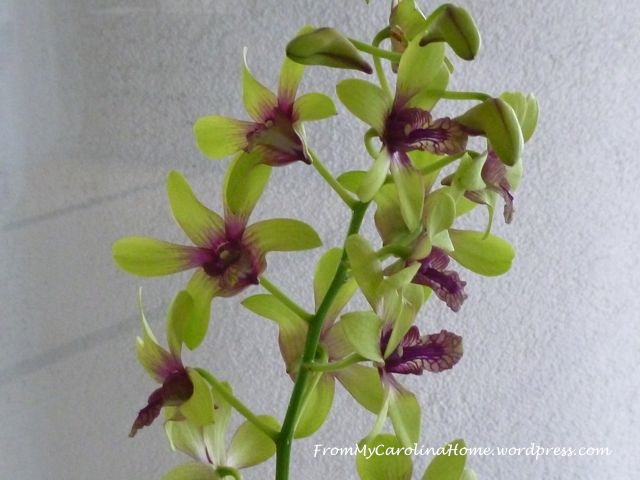 Peachy pink Phalaenopsis was blooming near the elevator. 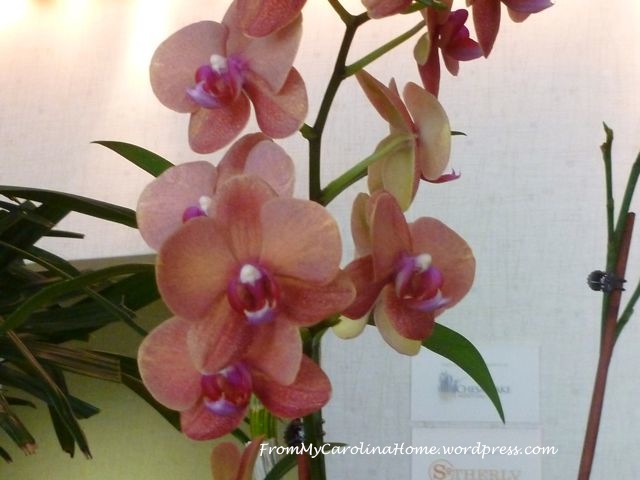 This yellow orchid with a white lip and deep pink throat had two blooms open, and more to come in buds. 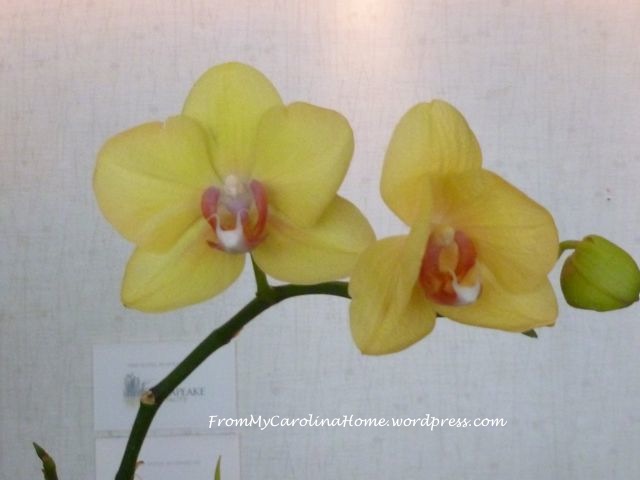 Our local Mountain State Fair garden competition has an orchid category.   There were not a lot of entries, and this one had a ribbon.  It really caught my eye, with its green and purple coloring.  I am thinking it has to be a hybrid of varieties.  Did you know that there are over 10,000 known hybrids of orchids?  I was surprised to learn that. 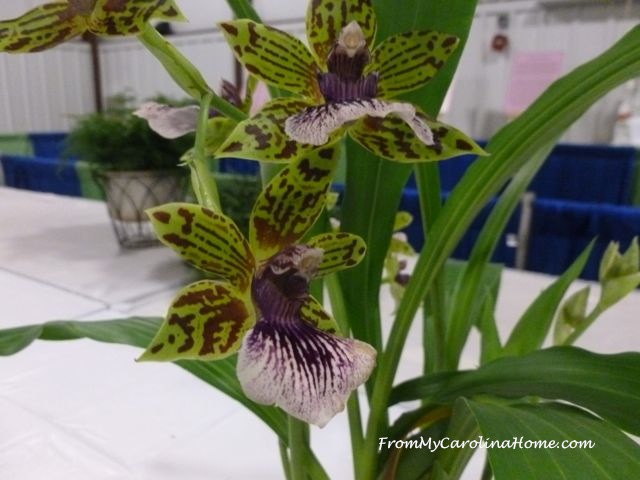 This two tone purple one had a lot of blooms, gorgeous colors. 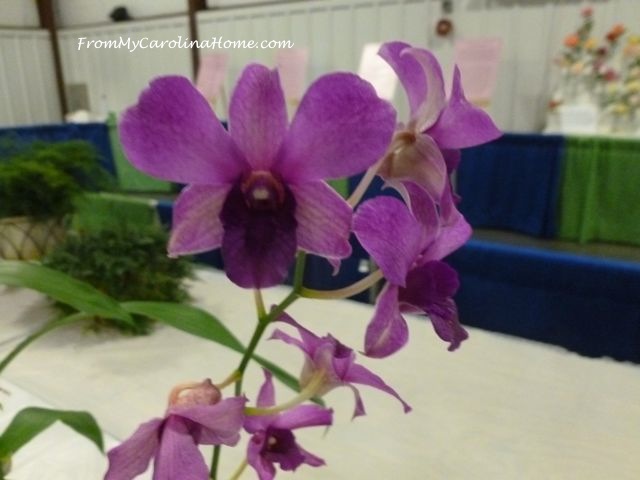 Here are a couple more photos from the Biltmore Gardens Orchid house.  These orchids in several colors and varieties were clustered together in a gorgeous display. 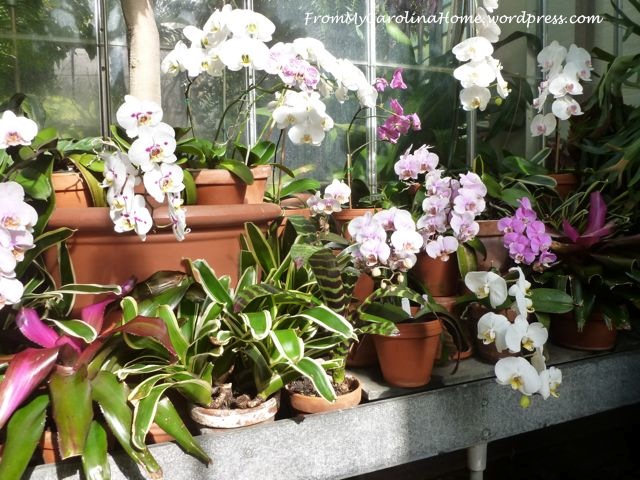 A yellow Phalaenopsis with a pink throat finishes our tour. 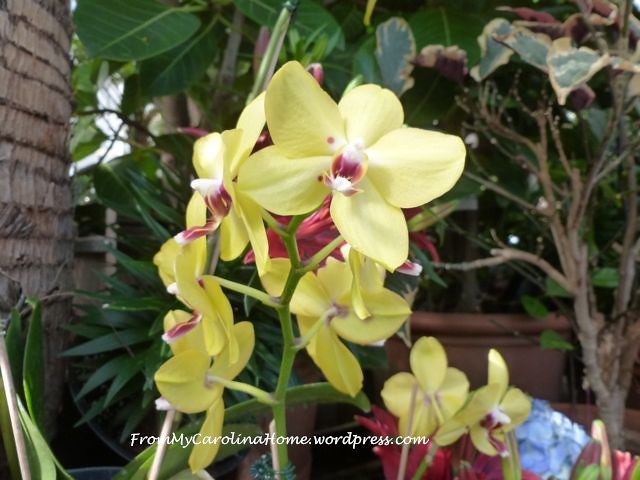 Originally, I planned to show all these orchids with a book review of a non-fiction book called The Orchid Thief.  It is the true story about a man who goes to great lengths to obtain rare orchids, and once prosecuted for theft of rare wild orchids from the Florida state swamps.  He is obsessed with a rare orchid Polyrrhiza lindenii or Ghost Orchid, which is a very unusual white orchid with lower petals that resemble legs.  The reviews are excellent, but I found the writing boring and kind of all over the place.  It does give an interesting glimpse of the mania of orchid collectors – called orchidelirium by the Victorians – and also the seedy underworld of orchid commerce.  The subject of orchids and the world of orchid collectors still interests me, so I’ll try other books on the subject before recommending one.

Update, just to be clear, none of these flowers belong to me – they are all pictures I took while at the Biltmore House in Asheville or the Hilton Hotel in Wilmington.  The only plant I have is the bedraggled one that I repotted, it isn’t flowering but I have hope.

Are you a fan of orchids?

Sharing at Share Your Cup, Saturday Sparks at Pieced Pastimes

24 thoughts on “Orchids for Winter Beauty”