Winter finally arrived with some really chilly temperatures and snow!  This morning the total is approaching a foot, and it is still coming down. This picture was taken about an hour ago, already 6-8 inches everywhere. The forecast for my area is 12-18!  With the leaves gone, our winter view is able to see the mountain to the east of us. 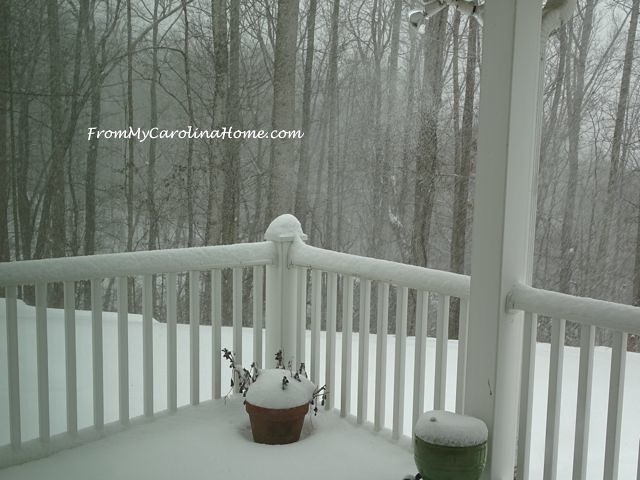 On the bird feeder, our local avian community has been working hard to empty the seed reservoir over the past few days.  I know that extra protein and fat are essential for them in really cold weather.  There are literally hundreds of recipes on the internet for suet, using all kinds of things for fat and protein.  So, I thought I’d try something with what I had on hand. 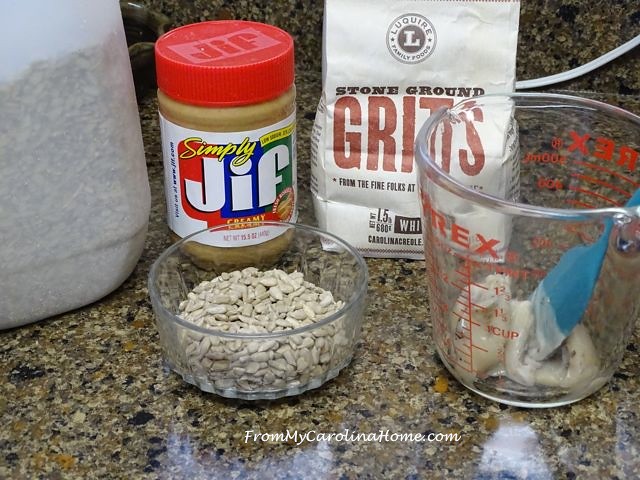 I had lard left in a pan after cooking bacon that I allowed to become solid, so I skimmed off the top and put it in a cup. Then I added about an equal amount of peanut butter. 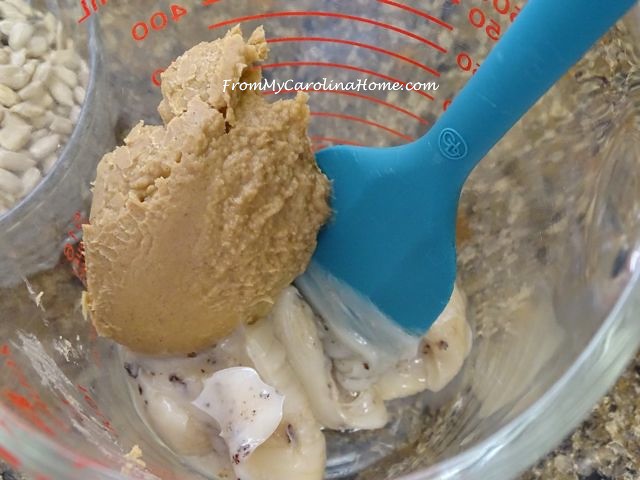 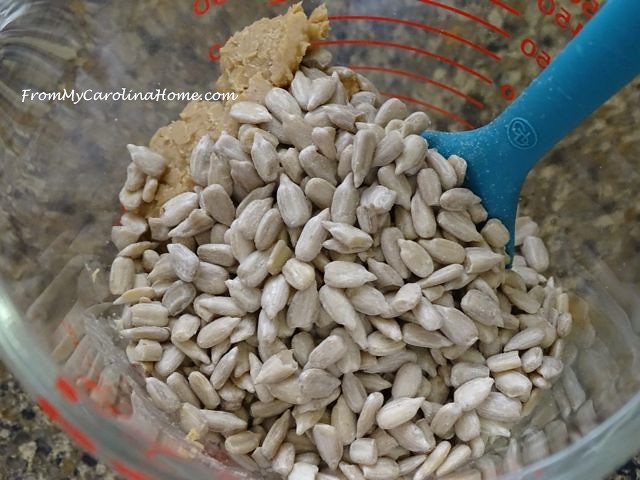 And cracked corn in the form of grits. 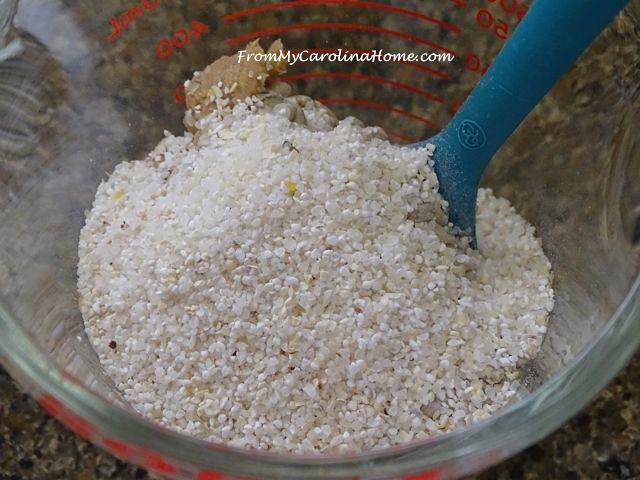 Mixing them all together, … 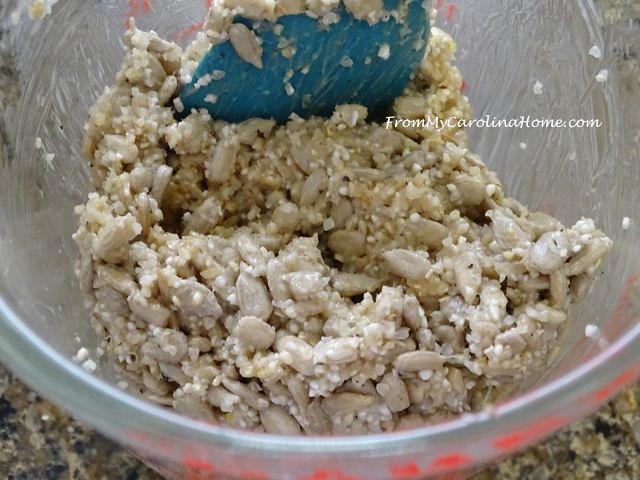 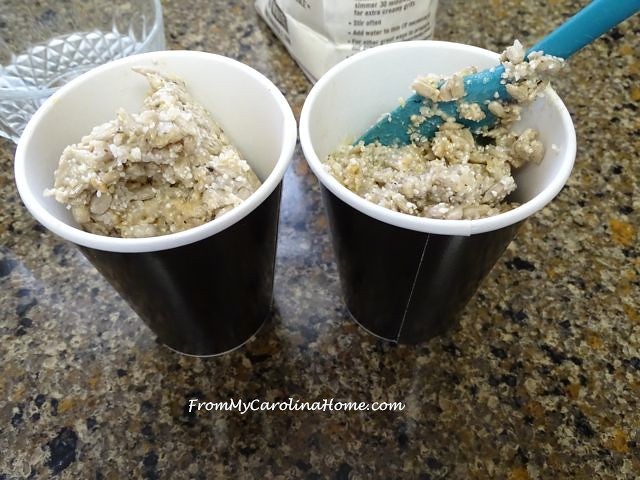 and packed the mixture down to make two round suet cakes. 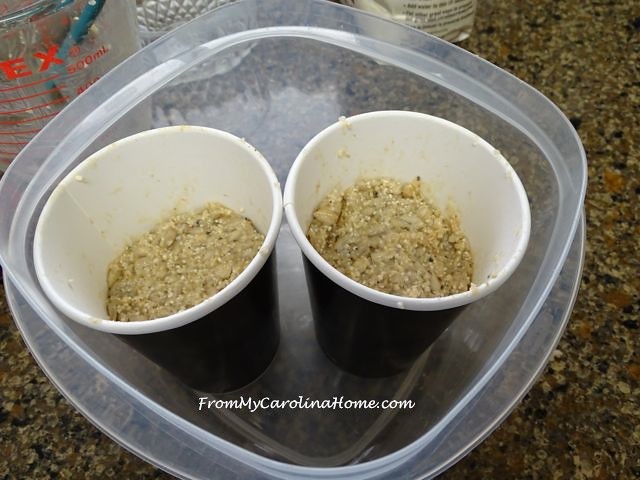 I found a suet feeder at the hardware store. 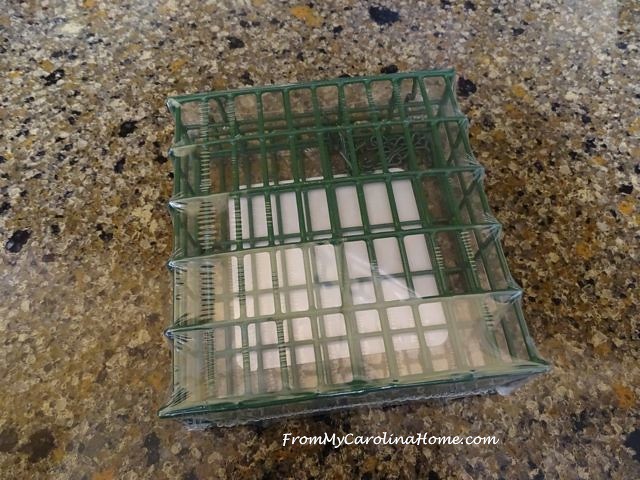 It was a bit thinner than my little cakes. 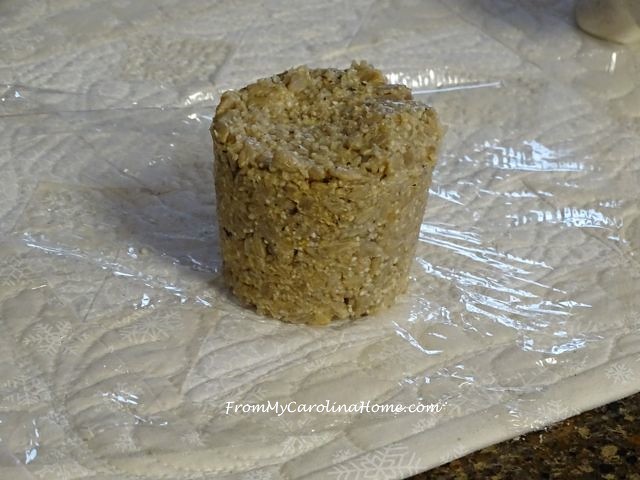 But I flattened them a bit to form a nice round cake. 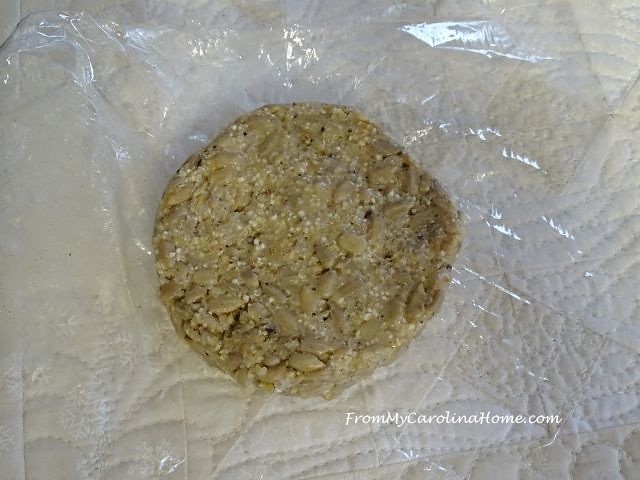 DH figured out how to attach it to the feeder pole, under the main feeder but still out of the squirrel’s reach. He put it out a few days ago. I wanted the birds to have time to find it before this blizzard hit.  It took a day for them to find it, and the Carolina Wrens were first. 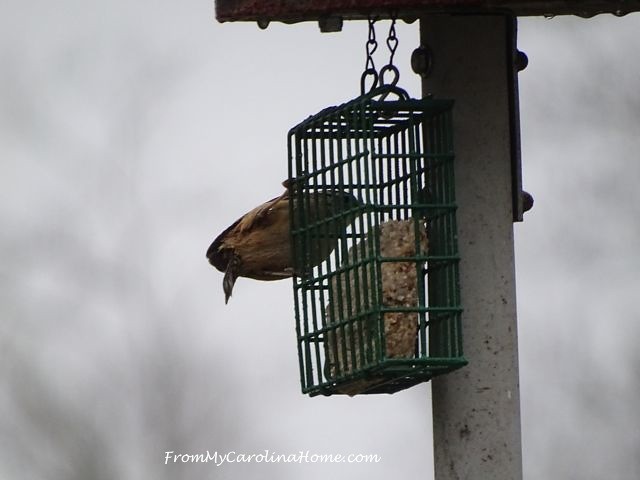 The cardinals weren’t too interested while the weather was good, but that changed this morning. 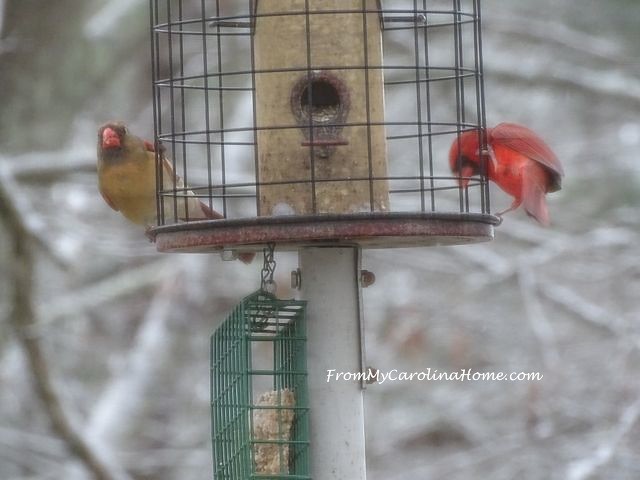 Today they all looked cold, with their feathers all fluffed up against the cold. DH says some of them are just fat. Still, he is the one that buys them the better seeds, already shelled. But now I have proof of my theory. Here is the junco, as he landed. 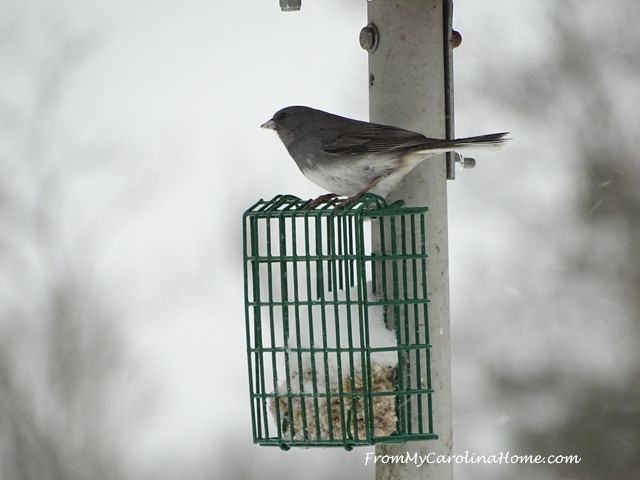 Then a moment later, he fluffed himself up. Same bird, now much bigger. 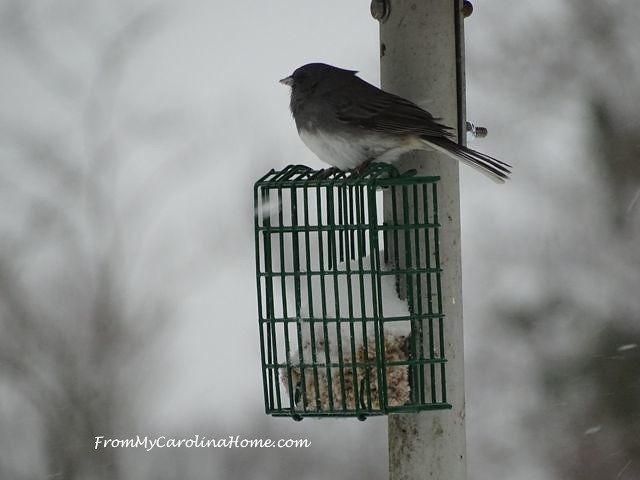 This morning, everyone was competing for morsels of this high calorie meal. A chickadee and a titmouse share the wealth.  I was surprised to see snow on top of the cake.  Didn’t seem to bother the birds, though. 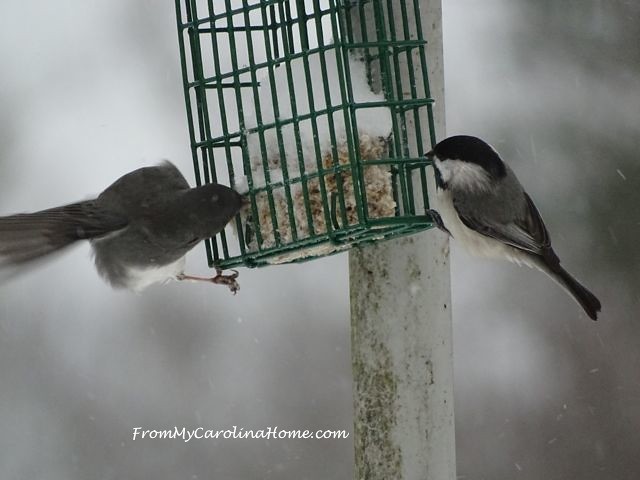 Then a woodpecker stopped by. 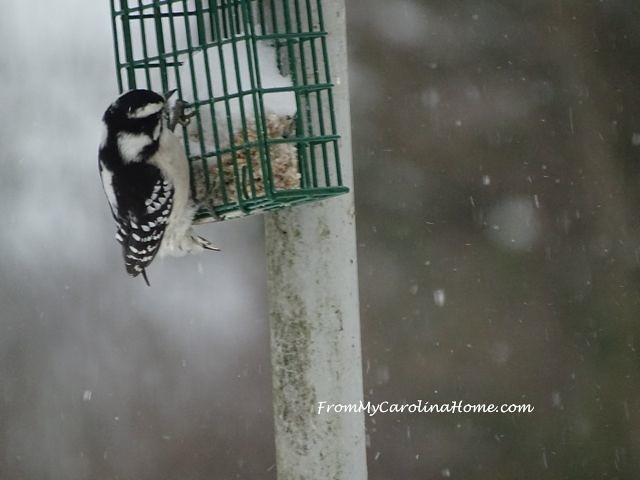 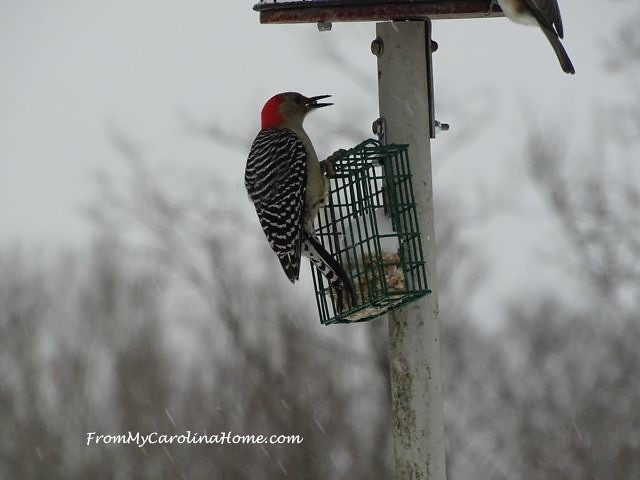 I didn’t know what picture I had until I was pulling them off the camera. This one is neat, with the little wren still hanging off the side of the feeder, while the titmouse flew away. 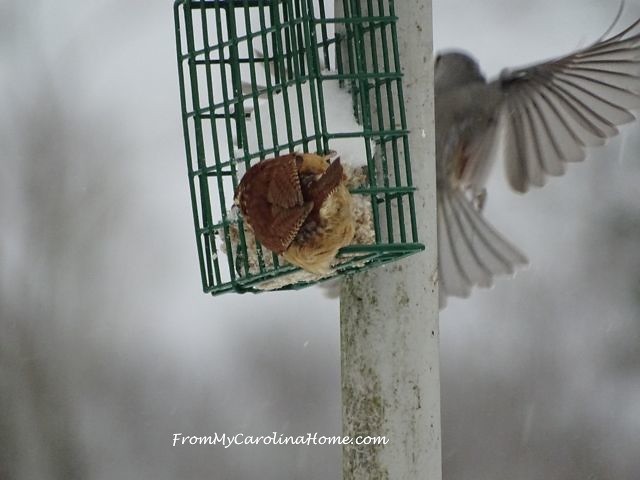 I had to keep grabbing the camera, as more birds stopped by for a bite. Here, a female cardinal has a morsel in her beak, while a nuthatch attempts a landing. 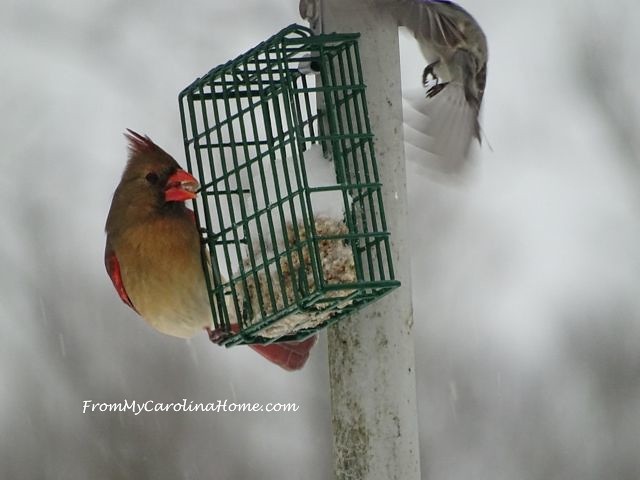 Yes, he made it.  The male cardinal has had a few morsels, but I didn’t get a good picture of him. 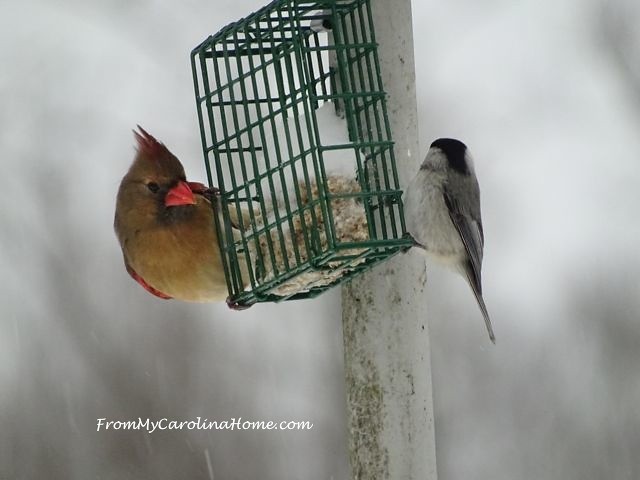 All the birds seem to be sharing nicely. DH says he will put the other suet cake out, and refill the seed reservoir a bit later when the snow lets up. I think I’ll make some more cakes with just vegetable shortening for later. They seem to be scarfing it up. Next time I am at the store, I think I’ll get some mealworms and see if the bluebirds are still around.

Are you feeding your birds?

23 thoughts on “Making a Meal for our Feathered Friends”