I have been experimenting with recipes for coffee cake recently and wanted to do something with bananas.   When I have bananas, I usually make banana bread, but this time I wanted it to be lighter and more cake-like, yet substantial enough for breakfast.  My mother-in-law gave me a recipe long ago for a Sour Cream Coffee Cake, and I thought that might just be amenable to a little tweaking.  And indeed it was!! 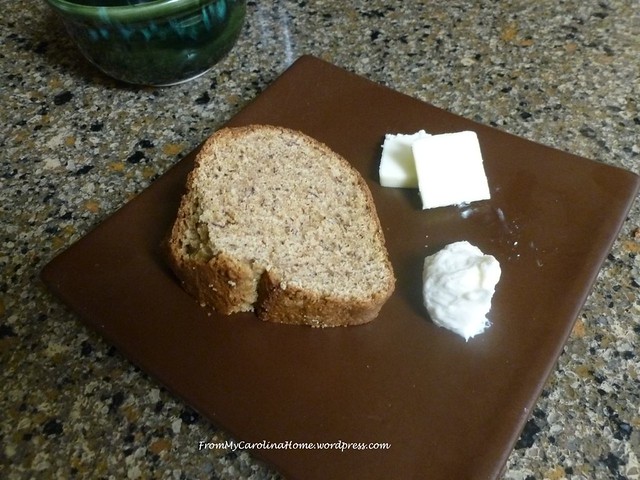 I served it warm this time, with some of my Scone Cream and a little butter. So here are the basic ingredients.  Ignore the half and half, I didn’t end up using it.  Plus I added some butter flavor shortening instead of using all butter. 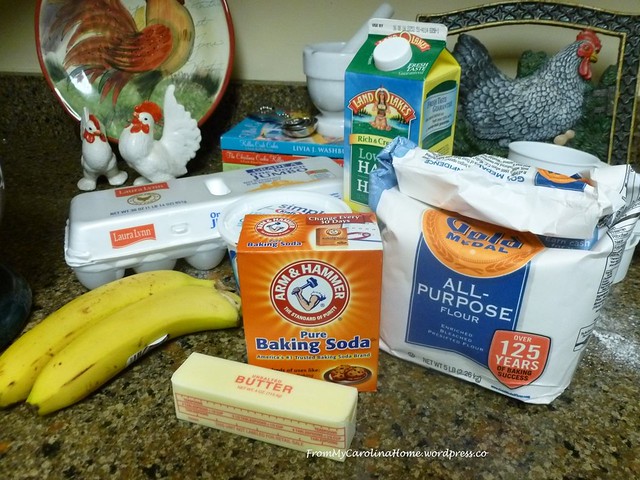 Start by combining all the dry ingredients together in a bowl including the spices.  Cream the butter and shortening together well. 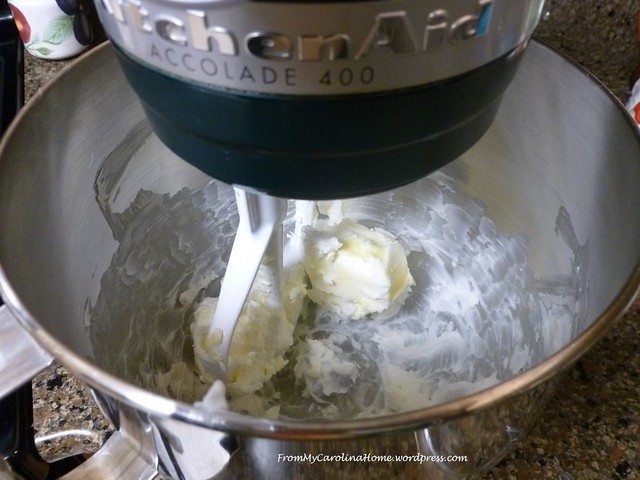 A standing mixer helps a lot here.   Then add the sugar and cream until light and fluffy. 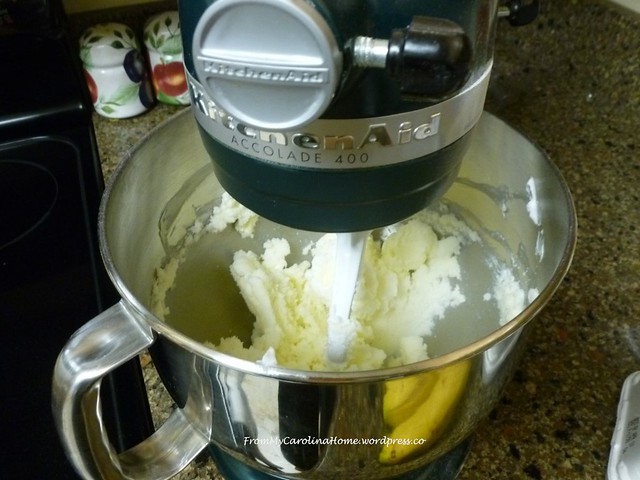 Add the eggs one at a time.  Beat well after each addition. 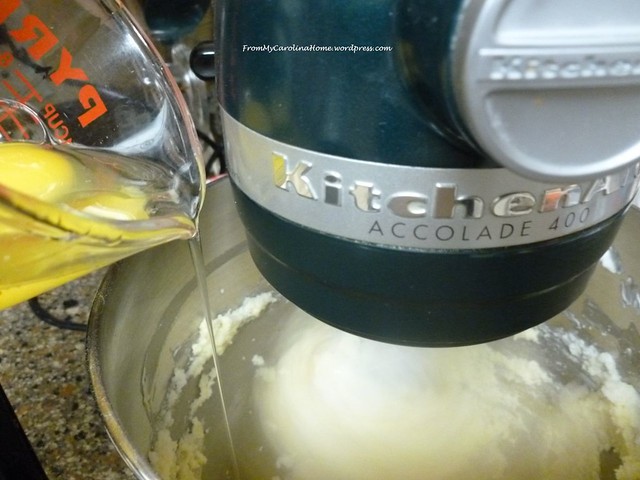 Mash two bananas and mix them in well. 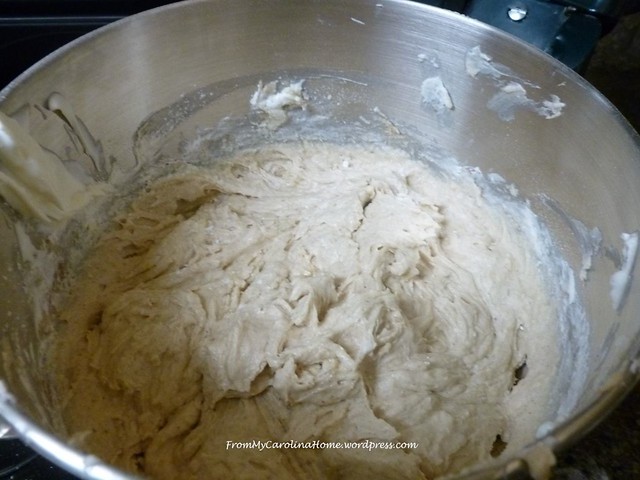 Then add 1/3 of the flour mix, then 1/2 of the sour cream, 1/3 of the flour mix, last half of the sour cream and the last third of flour mix. Pour into a bundt pan sprayed with no-stick spray. Bake about 55-60 minutes.   After cooling, I cut mine into fourths and freeze each wrapped in wax paper in one large zipper locking bag.  My husband can polish off a fourth of a cake for breakfast, so he can just defrost one serving at a time. 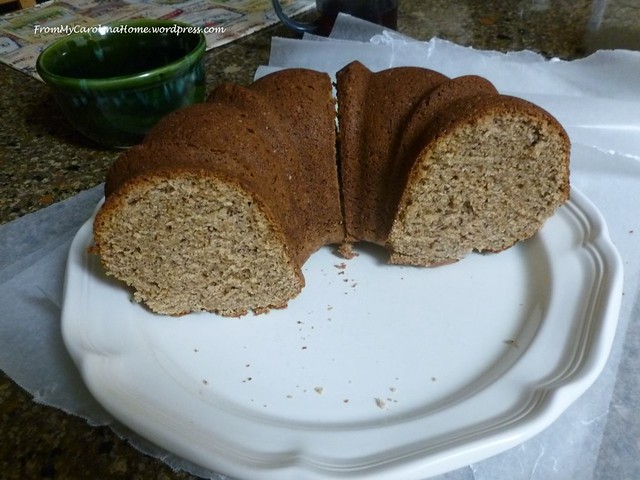 Just for fun, this Memorial Day weekend, I did a variation.  I only had one banana, but I had a few strawberries left over from a picnic.  So, I cut up the strawberries, mashed the one banana and used the two together as a substitute for 2 bananas.  I used just cinnamon, and left out the cloves and nutmeg.  This time I baked it in a tube pan.  Came out great!  Strawberry Banana Coffee Cake. 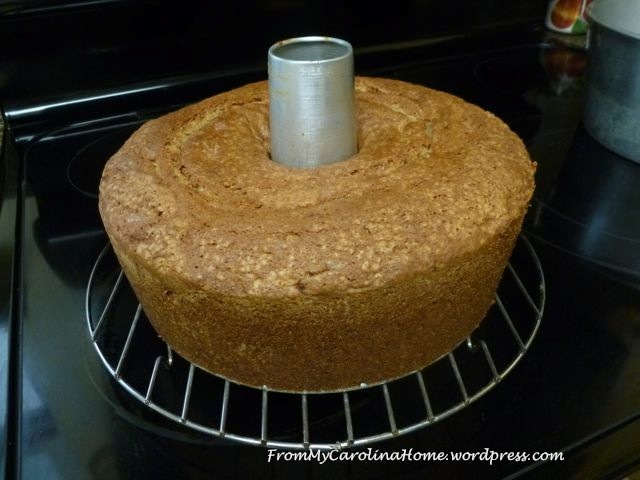 Preheat oven to 350 degrees.  Combine flour and next 6 ingredients in a bowl and set aside.  Spray a bundt pan with no-stick spray.  Beat butter and shortening together until fluffy, add sugar and beat well.  Add eggs one at a time and beat well after each addition.  Reduce mixer speed and stir in bananas until well mixed.  Add 1/3 of the flour mix and mix well.  Add 1/2 of the sour cream and mix well.  Continue with 1/3 flour and rest of sour cream mixing well after each addition.  End with the last of the flour mix and combine.  Pour into a bundt pan.  Bake at 350 degrees 55-60 minutes until top is springy.  Cool for a few minutes in the pan, then turn out onto a rack to finish cooling.

Variation – substitute four or five cut up strawberries for one of the bananas, leave out the nutmeg and cloves.