Languid and hot days alternate with rainy afternoons now that summer is in full swing here.  July is our hottest month of the year and it has been days of above average temperatures for us.  I do not like summer heat, especially when it is humid too, so it is indoor activities for me most of the time.  But in the early morning, or at dusk, we can spend a bit of time on the veranda to enjoy birdsong and fresh air, and the fireflies after sundown.  Taking a short stroll to the flowerbed, there is much to enjoy in July.  The daylilies are in full flower, usually with multiple blooms a day.  I like this deep purple with the yellow throat. 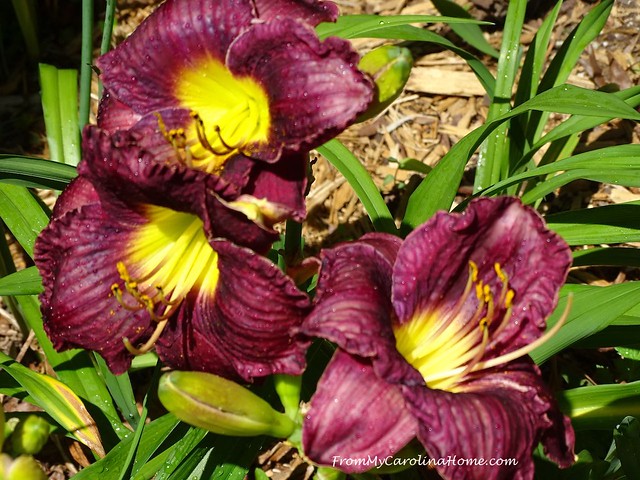 We spotted someone new recently.  After a bit of research and observation, we have determined this is a newly fledged female cardinal.  She was wobbly and not very coordinated, but she could fly.  She just couldn’t land on the feeder, so was pecking around on the ground.  The black beak threw us off for a bit, but it does change to the lighter color as the bird matures.  She is a fluffy little thing right now. 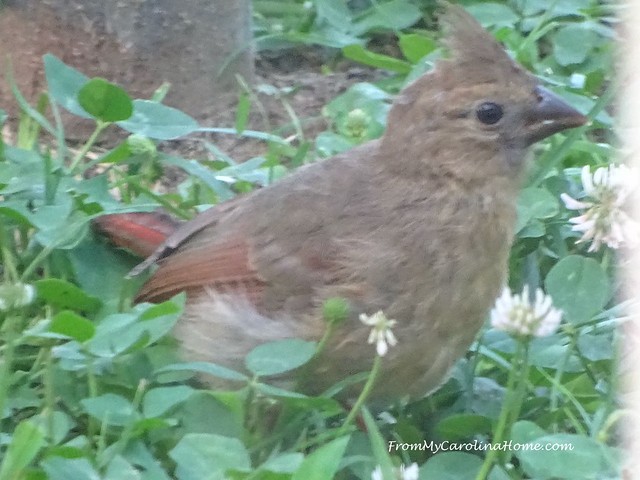 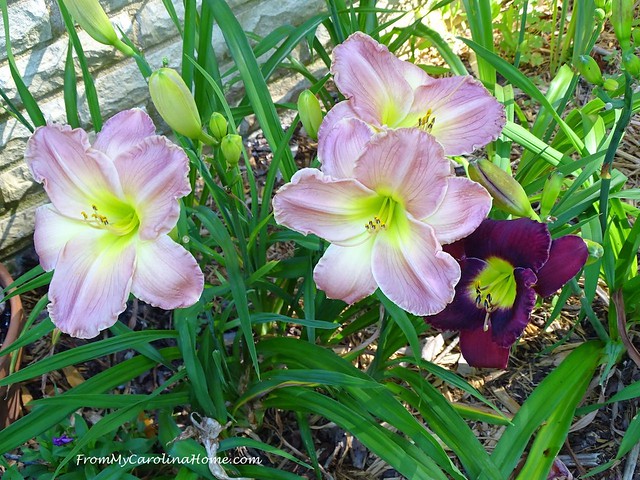 On the feeder, a house finch gets a meal. 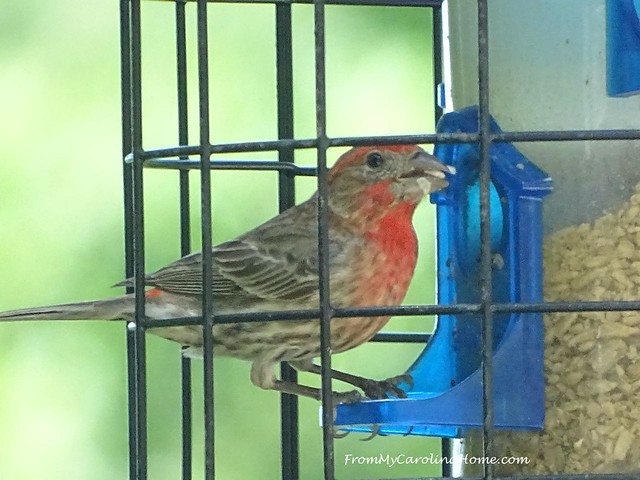 A rain storm passes, leaving wisps of clouds across the valley, settling between the layers of hills. 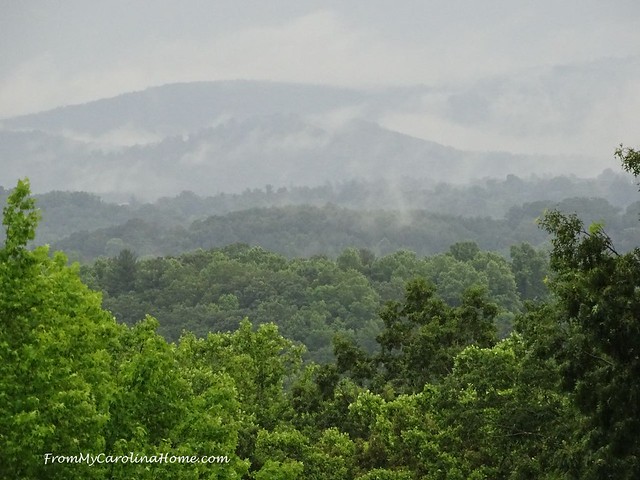 My dahlia bloomed, such a vibrant orange with bright yellow!  I had three this color and they lasted about five days each. 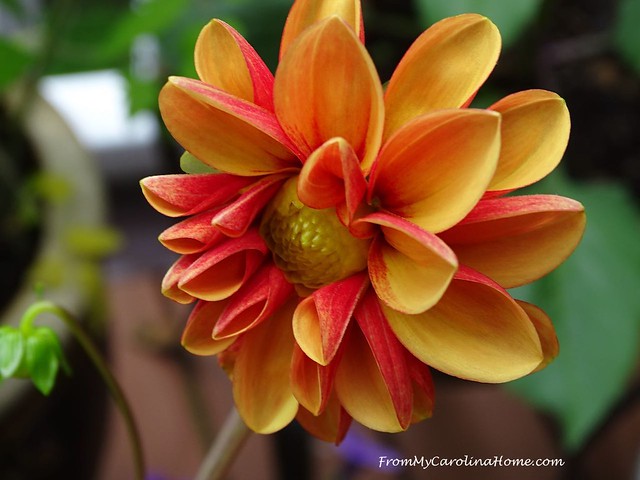 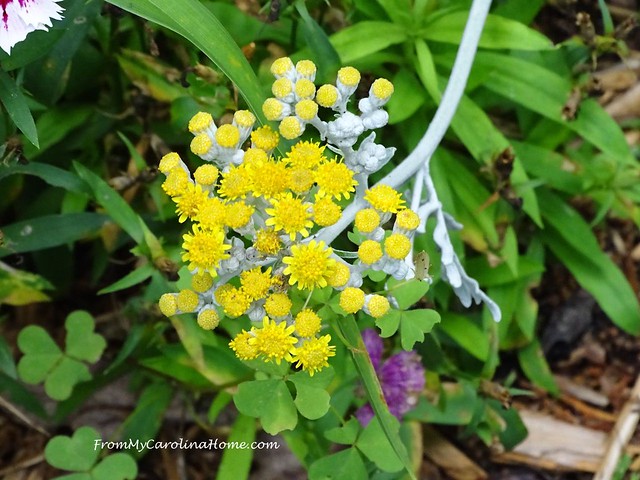 The ‘Easter’ lily bloomed in late June.  I got this as a gift several years ago and when it was done I put the bulb in the flowerbed.  It has bloomed every year since. 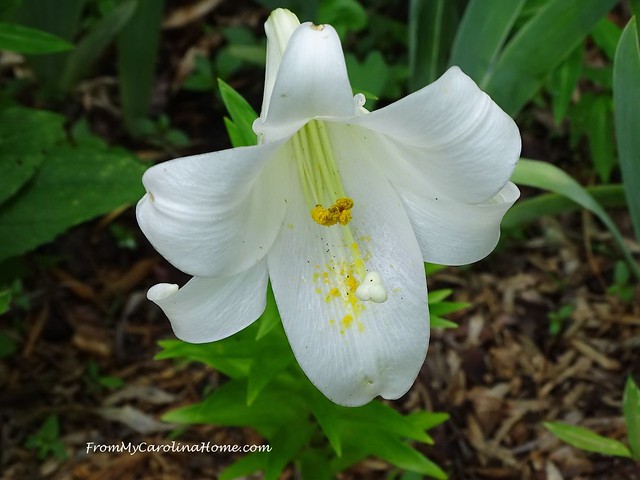 I added more lime to the soil under the hydrangea, and got a few purple flowers.  Most are still blue, so I’ll be adding a bit more lime as I want more pinkish tones.  But I do love this color. 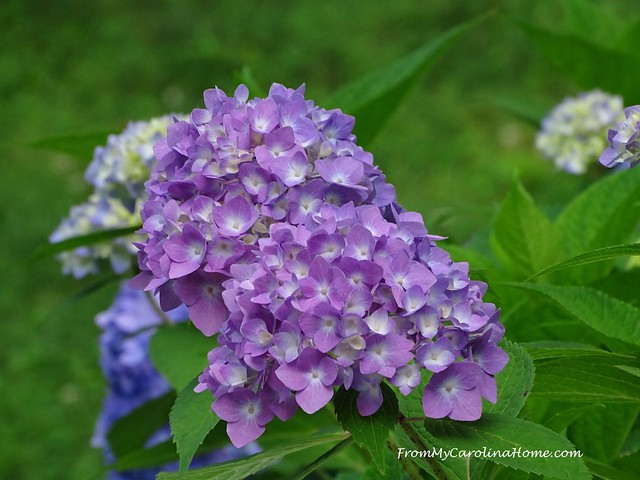 Out back, the rhododendrons are putting on a show with lots of pure white flowers. 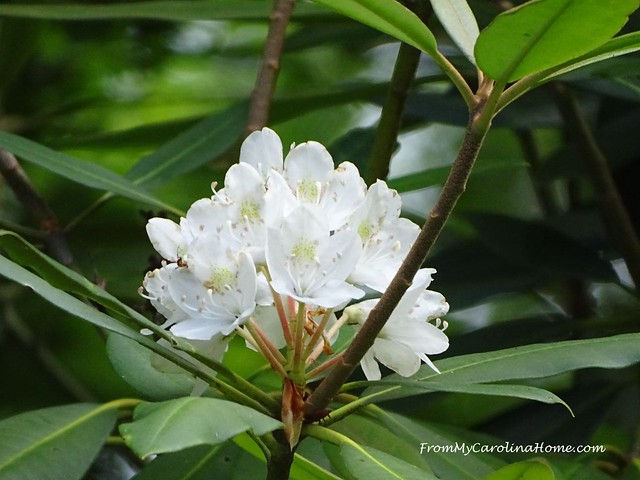 Oliver continues to beg for meals almost daily.  I can’t help it, he is just too cute, so I have to give him a morsel of whole grain bread. 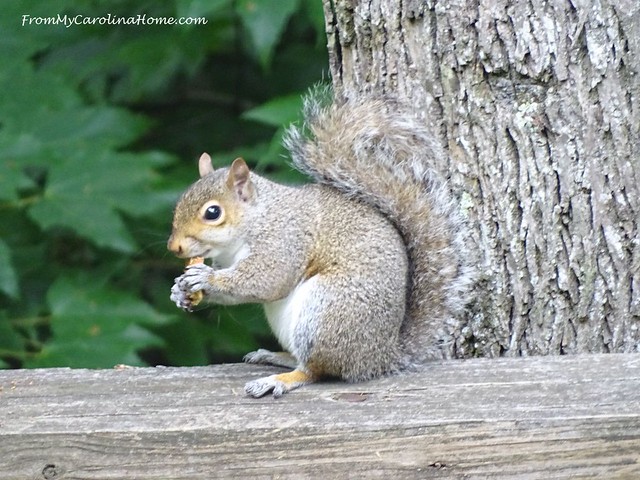 The hostas have put up their flower spikes.  Lovely purple trumpet-shaped flowers are attracting lots of pollinators. 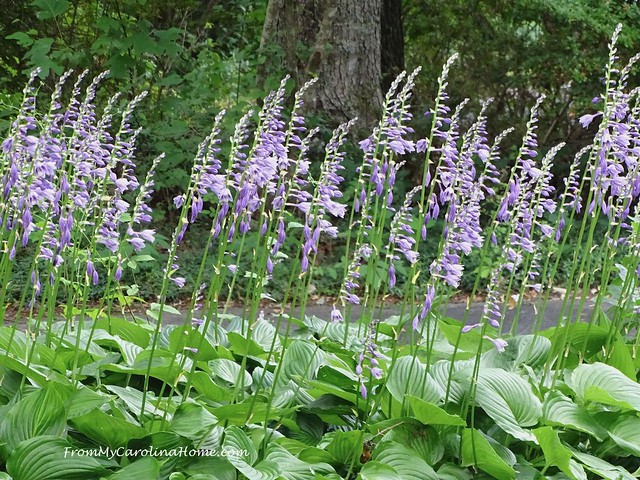 Last week, we had to encourage these two to move on and leave the bird feeder alone.  One was pulling on the pole in sharp jerks, putting all his weight into it, but it is too strong and tall for him to bring down.  We scared them off with just a bit of shouting, and I grabbed a quick photo before they were gone. 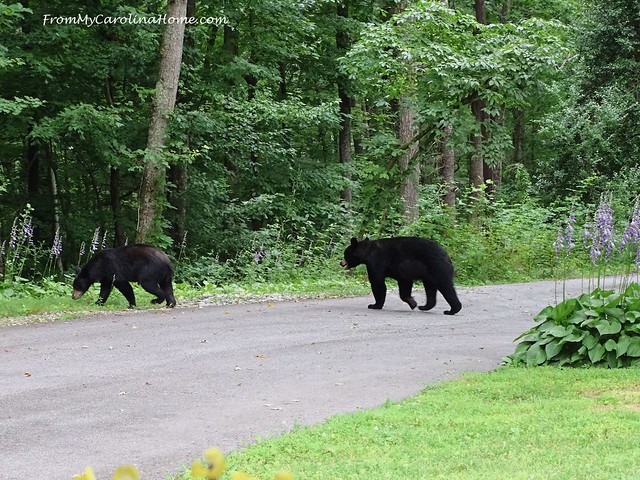 My tomato plants needed additional staking this week.  The branches are getting heavy with growing produce. 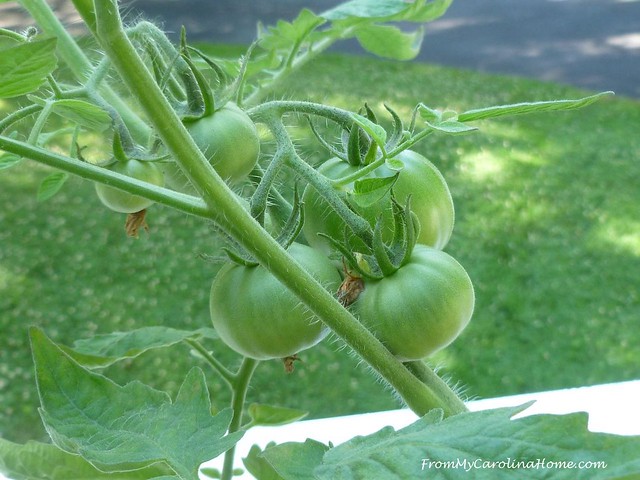 The echinacea bloomed this week too, lovely deep pink flowers.  The shrub has almost 2 dozen blooms on it now in various stages. 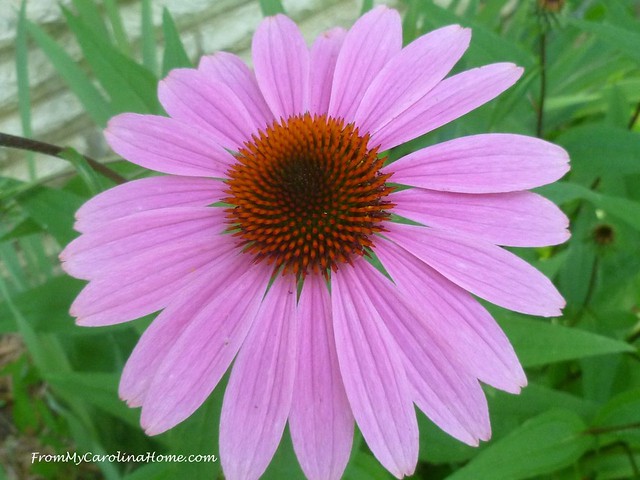 Two female turkeys came by, and as I stepped out to the veranda, they came running up.  Obviously, they’ve been here before!  I broke a slice of whole grain bread into bites for them, and tossed the bits to them.  They gobbled them up (get it?  Gobbled them?  LOL, couldn’t resist.) 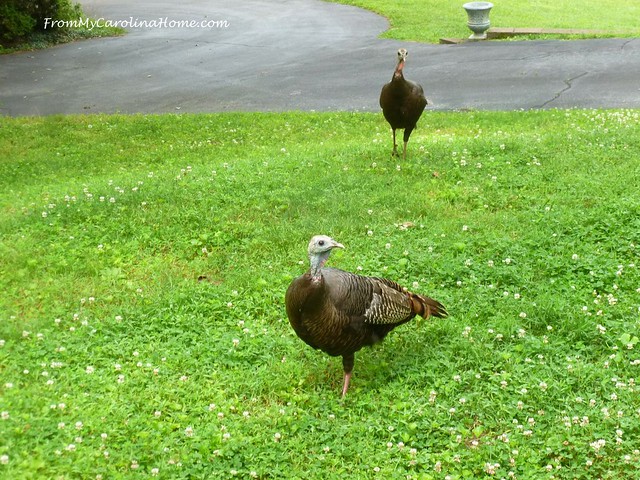 On the veranda, coral color impatiens that overwintered in the sunroom bloom with vigor. 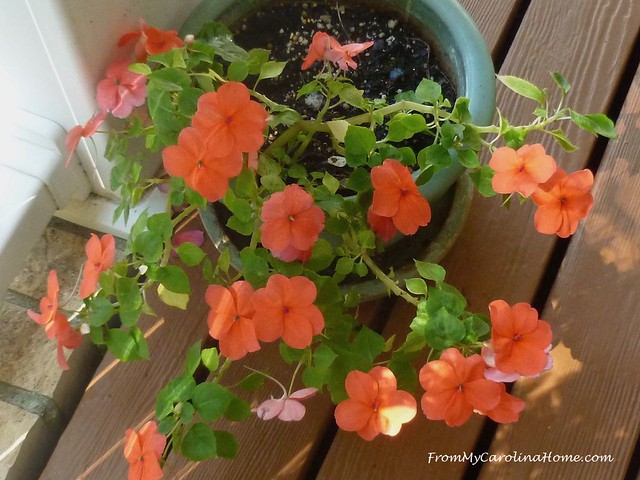 The west corner of the veranda is alive with color.  The purple pansies bloom in several shades with lots of blossoms.  White violas are in the urns.  Dahlia blooms are opening on the left, while the one on the right hasn’t bloomed yet. 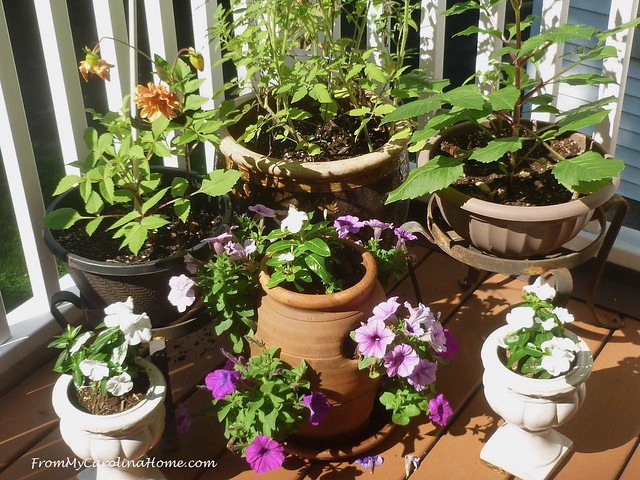 The geranium was cut back a month ago, but put out a new flower spike with this intense pink color. 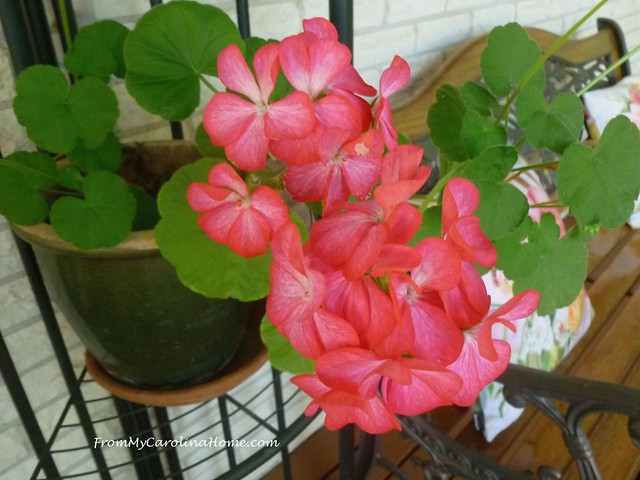 The torenias continue to bloom like crazy, attracting the hummingbirds.  As yet, I have not been quick enough to get a photo of the pair that often come.  A male ruby throat flits by, then a female will take her turn. 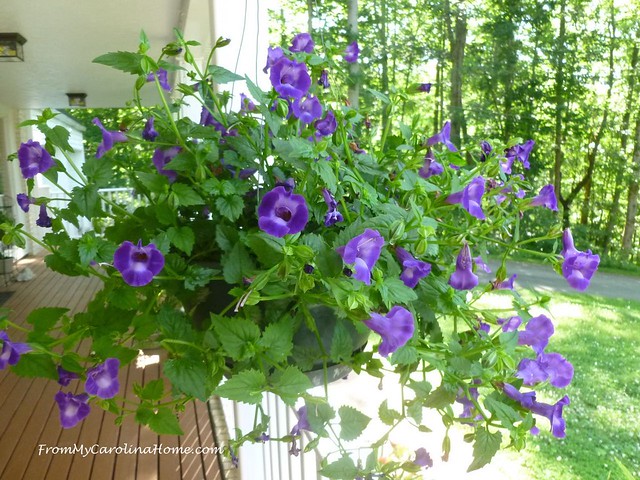 In another pot, my tiny Jump-Ups have begun blooming.  I love these little treasures with their happy faces and such detail. 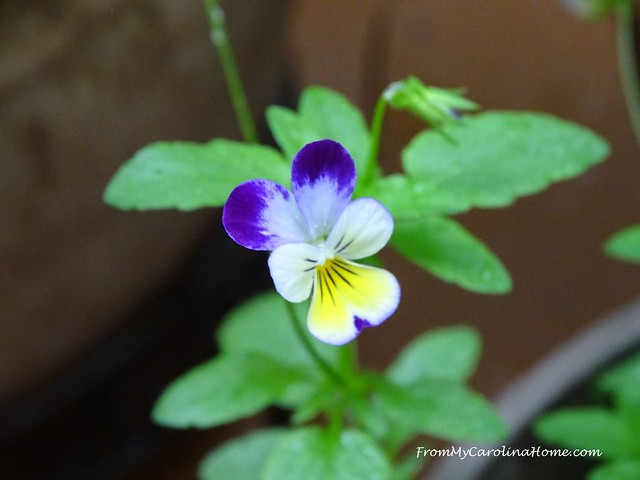 There are two different ones, both with interesting colors and details, like the dark spots at the bottom and the lines coming from the center.  One of these days, I’ll figure out a pattern for wool applique with these little flowers. 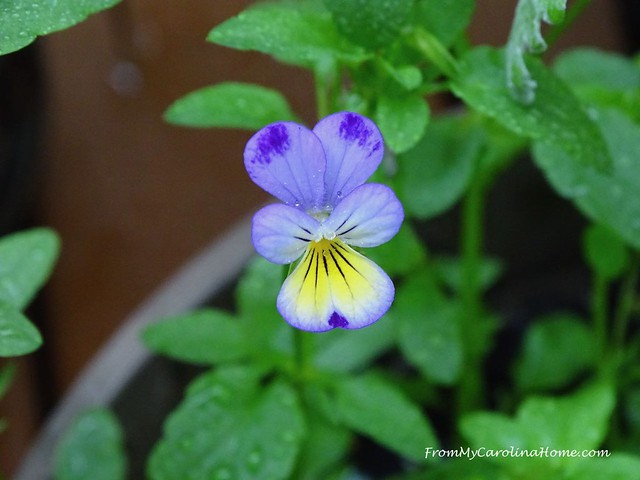 What is blooming in your garden now?

22 thoughts on “July in the Garden”