Now that we have 16 blocks, today I’ll show you how to put them together.  I’m not going to give you a pattern for this, as your blocks will look different than mine.  You may need to separate them differently than I have if your blocks have the same fabric on two or more blocks.  But what I will show is the method or process to figure out your best layout. 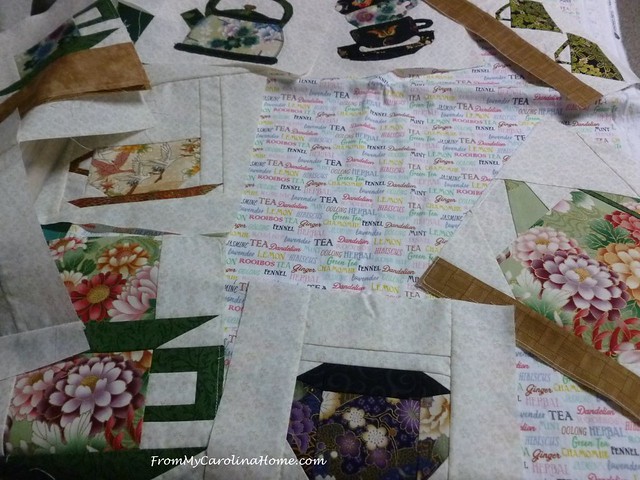 I thought I had found the perfect fabric for the fill-in bits, but the background was too bright of a white.  I decided to tea dye it to make the color closer to the background fabric I used on the blocks.  Tea dying is easy, just boil the teabags for about 5 minutes, then soak the fabric in the hot tea.  The longer you soak, the darker the color will be. 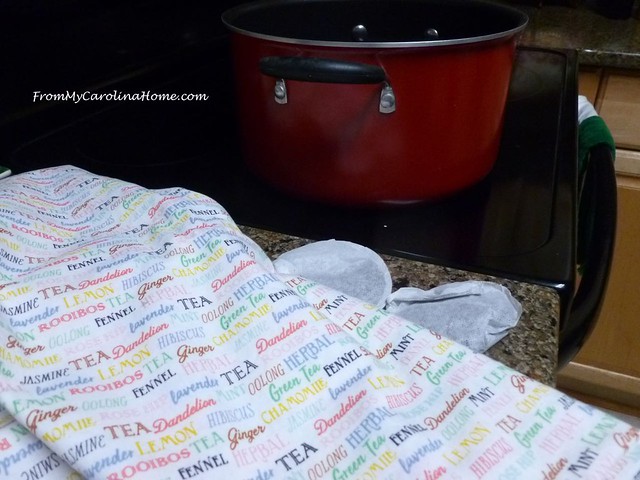 I overshot the mark, and my tea dyed fabric is now darker than I wanted, with a pink cast I didn’t like.  Ultimately, I thought this might be too busy after all, so it will be the backing. 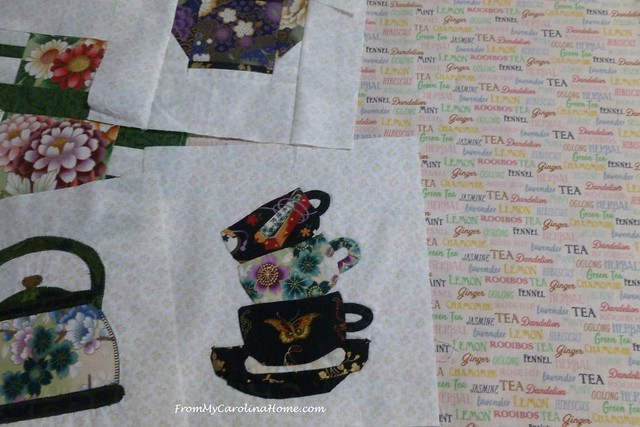 I began by laying out the blocks on a board so I could arrange the blocks to their best advantage.  I wanted to separate the hand embroidered blocks, and be sure the fabrics on the teacups were distributed nicely, since a few were made from the same print. 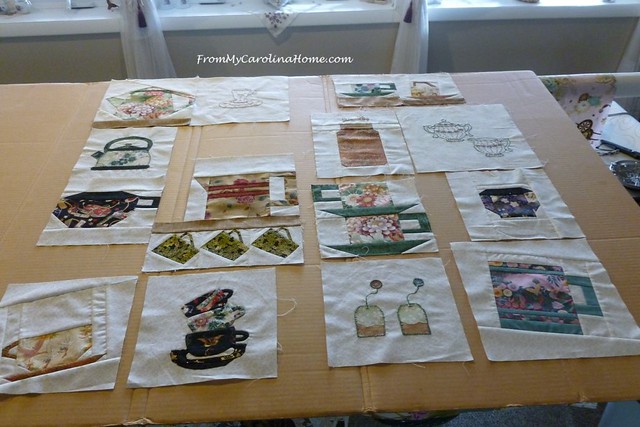 Pushing them together just a bit, I auditioned some Asian fabrics for fill in. 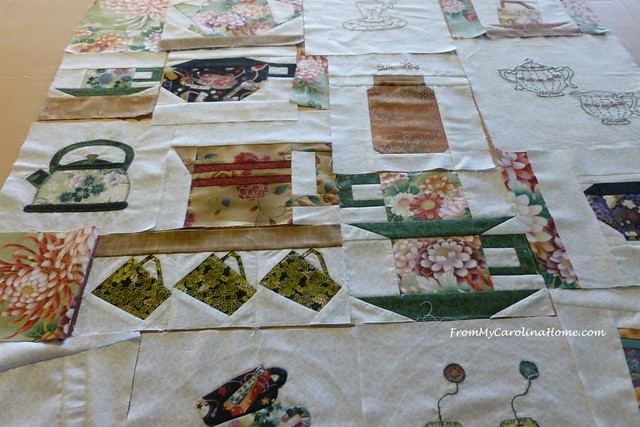 At this point, I realized the resulting finish would be nearly square.  I wanted it for a wall hanging, so I rearranged in three columns to make the project more narrow and longer. 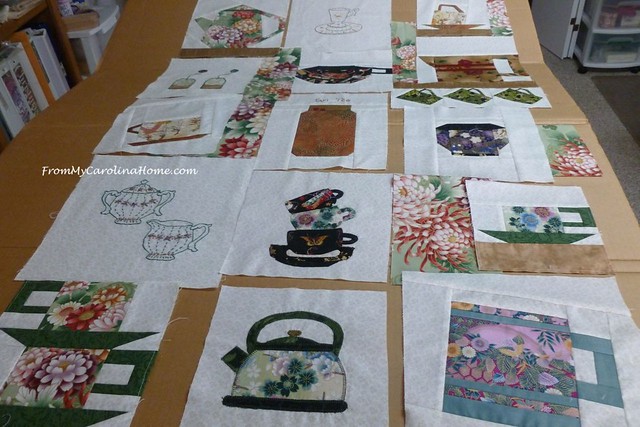 I piddled with it until I was happy with the arrangement.  To begin assembly, I looked at the lower right angled block, and the one above it. 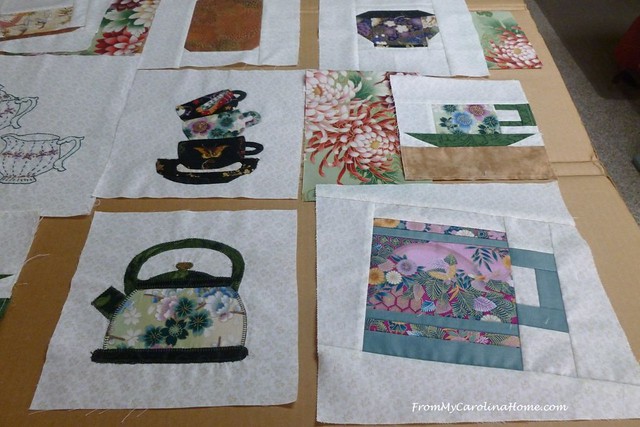 I measured the fill piece area, added 1/4-inch for one side seam, then sewed that to the teacup.  This made the unit now the same width as the block below so I could sew them together. 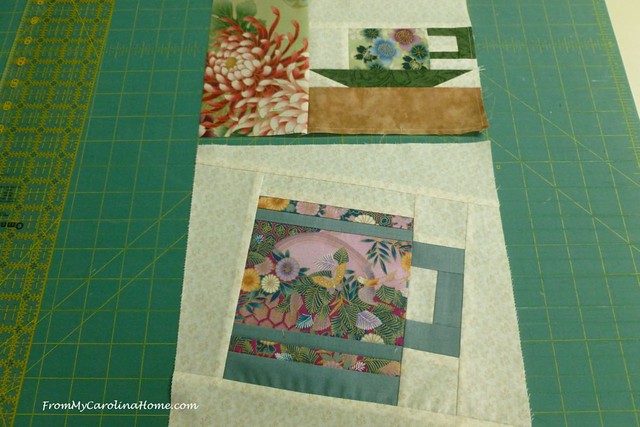 Moving up the column, I did the same with the next block up. 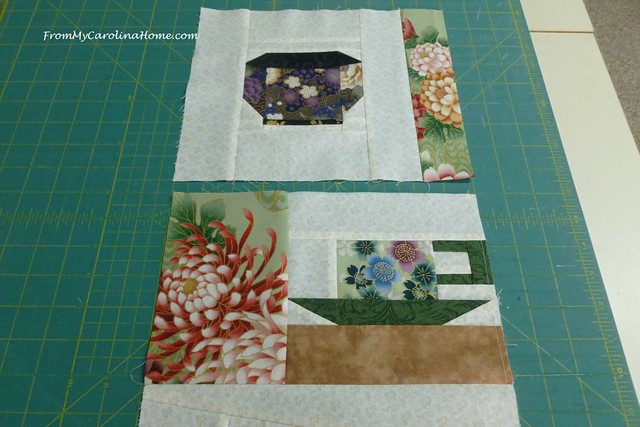 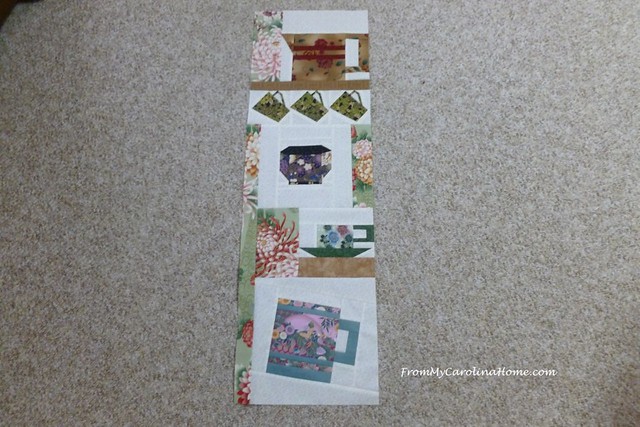 I started on the next column, as it looked like it was going to be longer than the first.  Saving the top block on the first column for later meant I could adjust if needed.  For these two, the easiest thing was to cut a bit off the bottom block to even up the size with the one above. 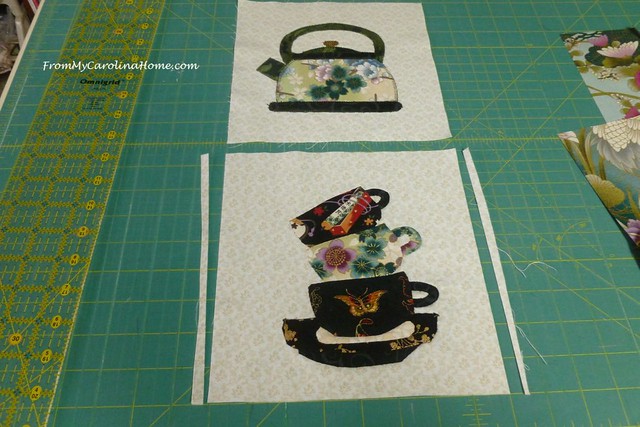 Switching the order, I added a small filler bit between, to break up the background. 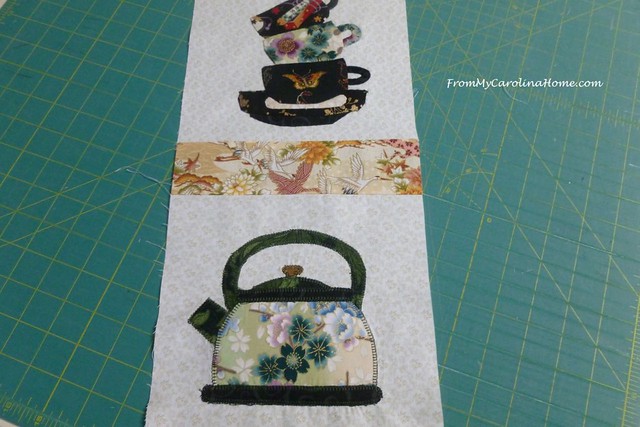 The next two blocks were handled the same way. 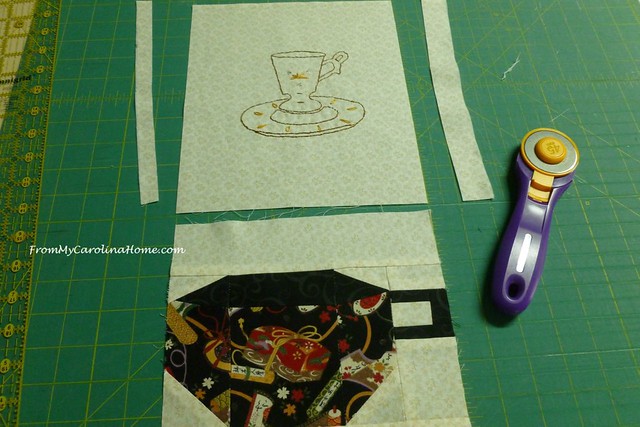 Lining up the top of the columns, and then the bottom of both columns, tells me how much filler I need in the middle, in this case 2 x 8 inches, and I’ll add 1/2-inch to the long side for seam allowance. 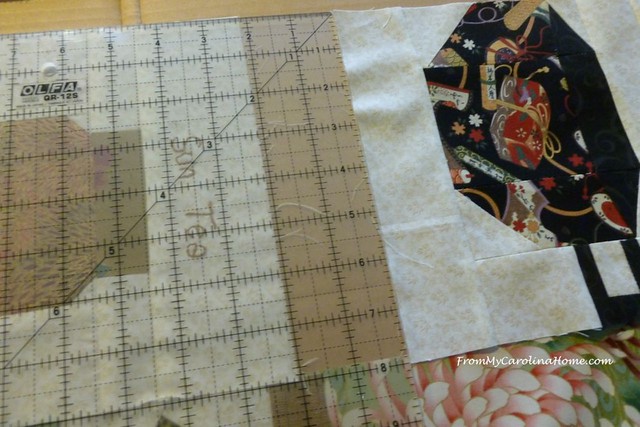 At the top right, I put a fussy cut crane from a wonderful print I received in a gift exchange over the holidays. 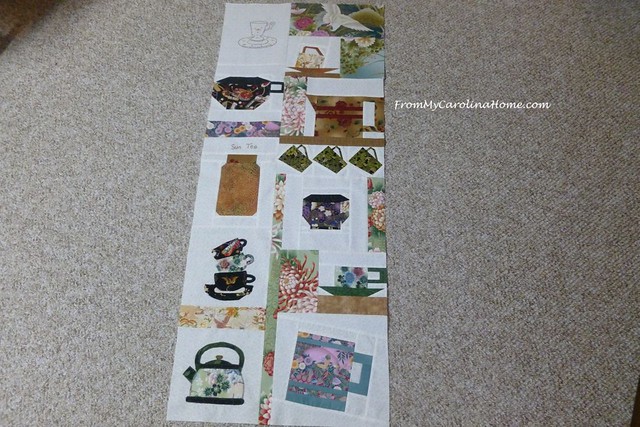 OK, so two columns done, and I looked at the third on my design board. 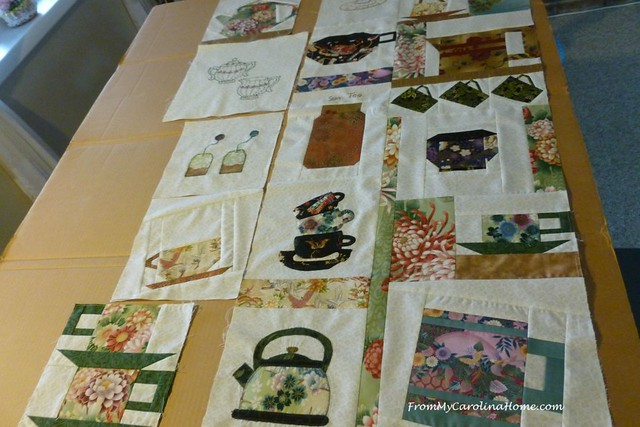 This time I began in the middle, sewing the teabag block to the angled cup, and adding a filler piece to match the embroidered sugar and creamer block. 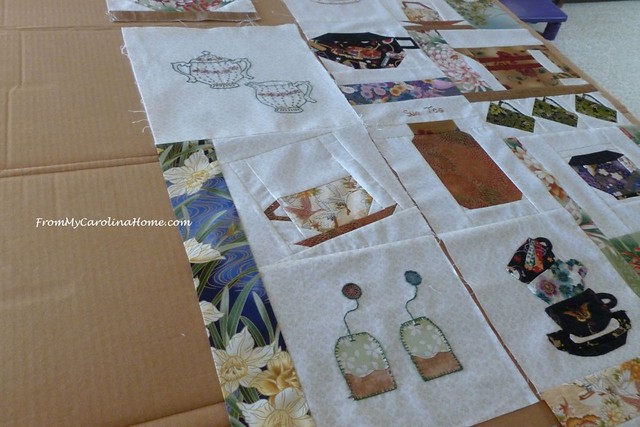 I finished sewing the blocks at the bottom to the center unit so I would know exactly how much filler I could use at the top.  I wanted to make another fussy cut crane filler piece on top in the size needed, using as much of the crane as I could. 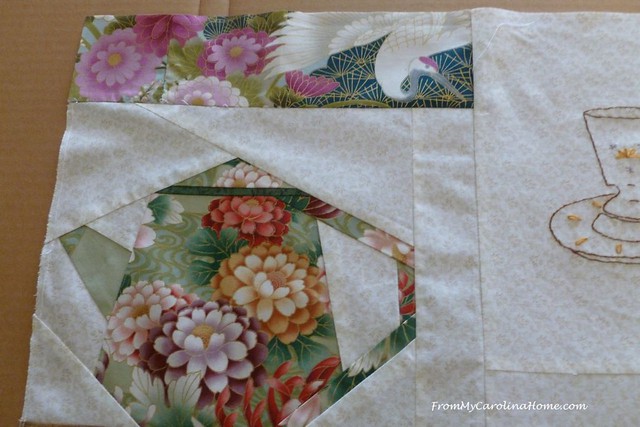 All assembled, the top has two cranes with an embroidered cup in the middle. 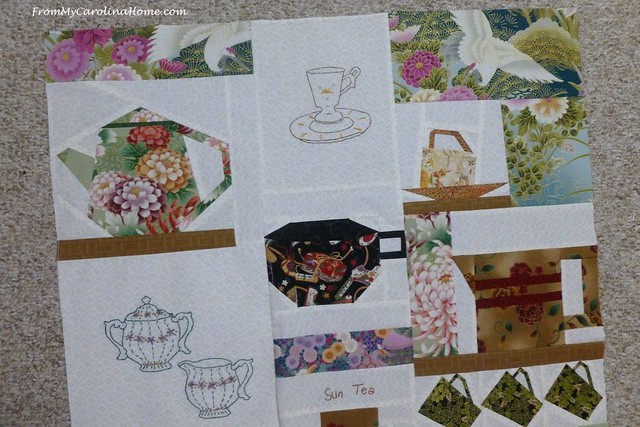 Pieced and paper pieced blocks are placed around hand applique and embroidered blocks. 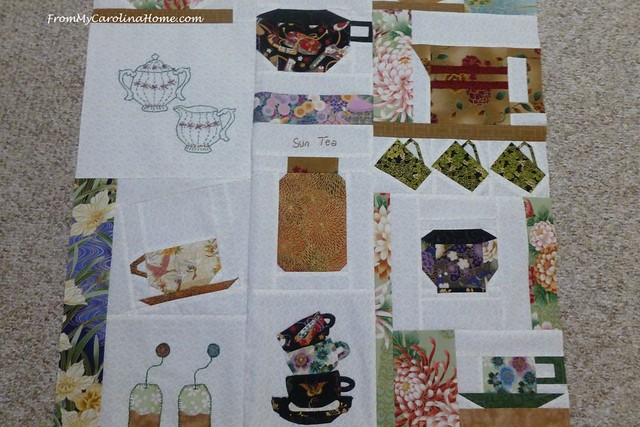 The prints are distributed too.  The final flimsy size is 32 x 50. 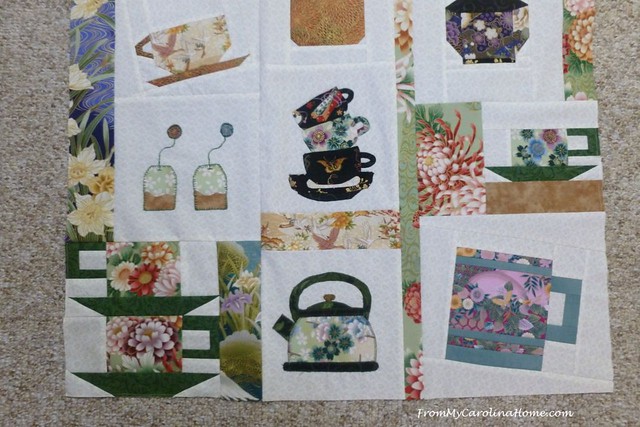 You don’t have to use printed filler, you could use the same background fabric which would make the blocks float on the background.  You can use lots of leftover bits from your scrap bag, or you could use the same fabric for filler throughout.  It is up to you, and what looks best with your blocks as you lay them out.  I hope you will share your progress on our Facebook group, Friends of From My Carolina Home.

Next time we’ll do borders and quilting.  Are you caught up with all your blocks?

20 thoughts on “Teacups Quilt Along – Assembling the Top”