Recently I was asked to do a fun kid’s quilt, with trucks on the front and a city street print on the back.  The quilter put borders around the back panel, and asked me to center it on the back.  This is a bit harder than it sounds.  When the backing is loaded, and the batting is placed, you cannot see the back, so centering the top on the back becomes a math challenge. 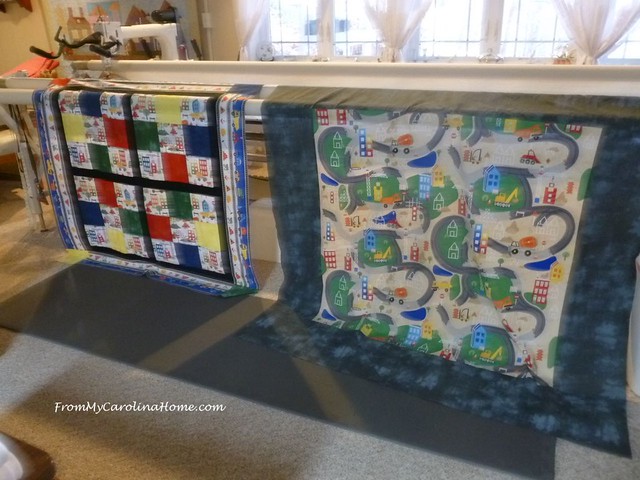 The top is pieced in a nine patch design, with directional borders and black sashing.  It is adorable for a boy, with trucks and bulldozers, and lots of construction motifs. 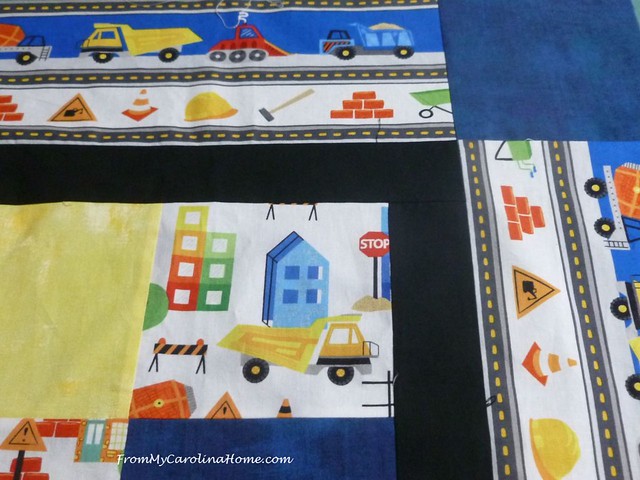 In order to have a reference point, I folded the back in quarters to find the exact center. 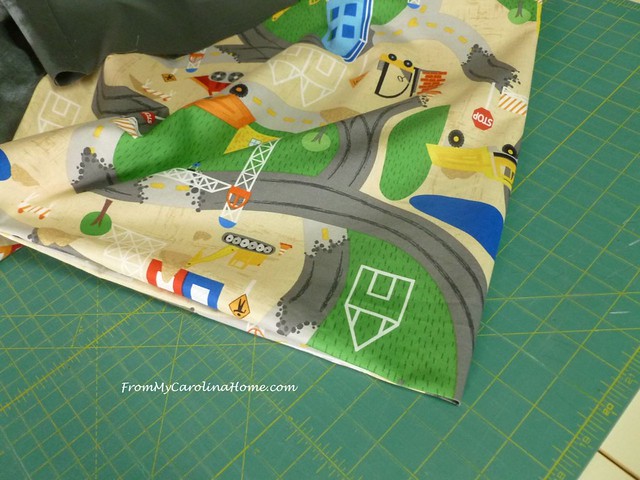 I did the same with the top, then put a single loop of red thread on the center point of both the top and the backing.  Then I measured both carefully, to see the difference in the top and panel sections, both in length and width.  Since both the top and back panel were directional, I need to pay attention to the placement too. 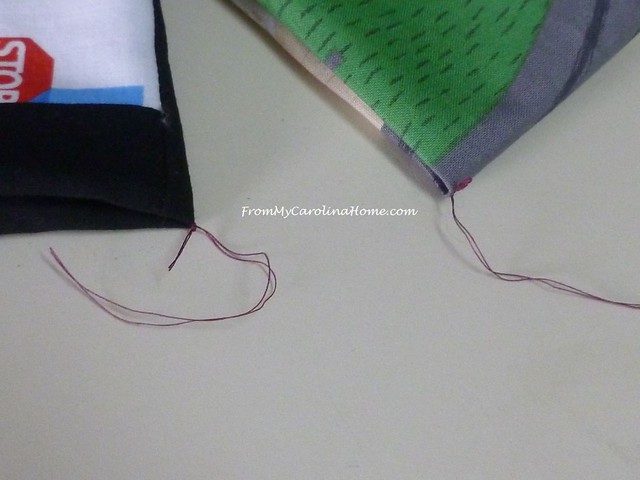 Loading the backing, it is going to be a bit more challenging as the borders have extra fabric at the edge. 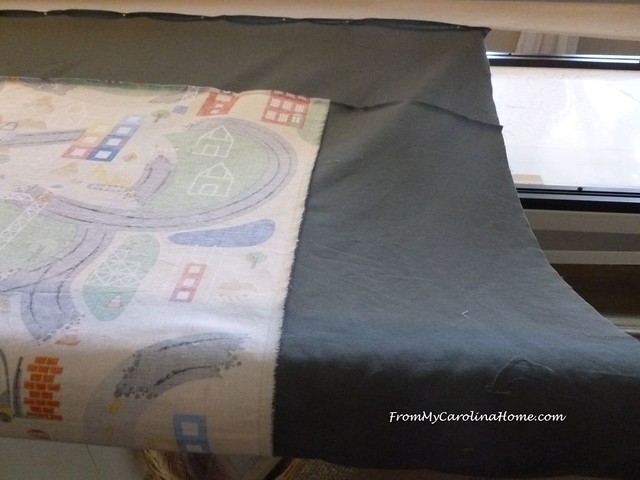 Part of this problem is the bias seams that the maker put on the borders.  Never do this.  Bias seams only make the borders more wavy and prone to excess fabric at the outer edge.  See my tutorial Quilt Borders, Understanding the Why to see the right way to apply borders and why.  Your border seams should be straight just like your piecing seams.  Quilters often forget that bias seams are only for binding, not borders. 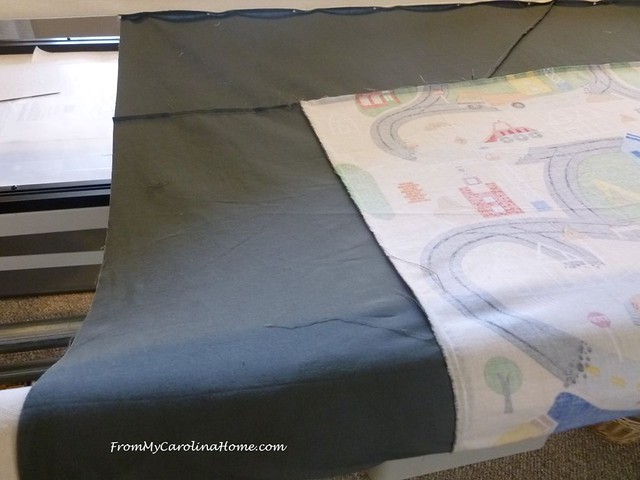 Making sure that the top seam of the panel is straight, I measured where the top should go from the seam edge up into the border, then added the batting on top.  The top was 12 inches longer than the panel back section, so I needed to place the top 6 inches above the panel seam on the back.  Math was total difference in length divided by 2, placing half the difference at the top and the other half at the bottom.  Then I measured the side to side difference so I would know how far from the side seams to place the top. 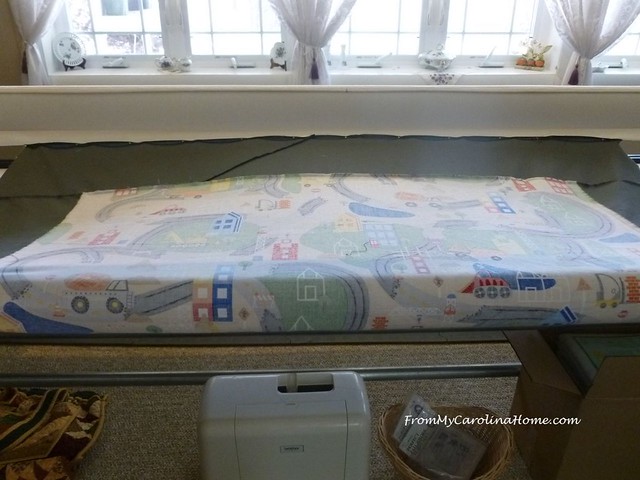 So, I placed the top based on the math, pinned it down, then rolled the bars until the red thread was visible.  Placing a pin in that point, I crossed my fingers. 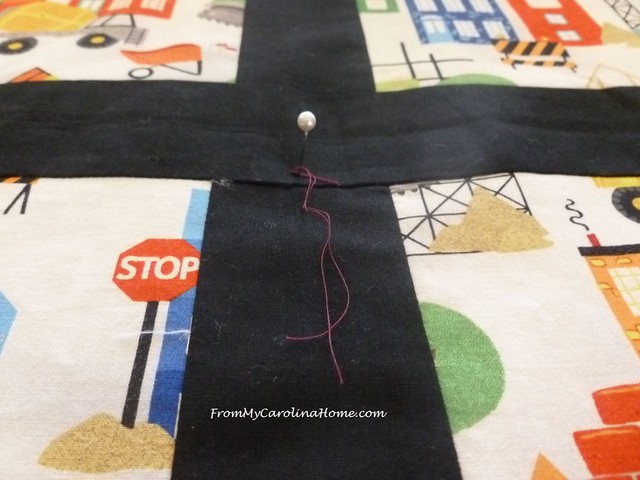 Crawling under the frame, I found the pin was really close to the center of the back.  Note that it is only about a 1/2-inch to an inch off. 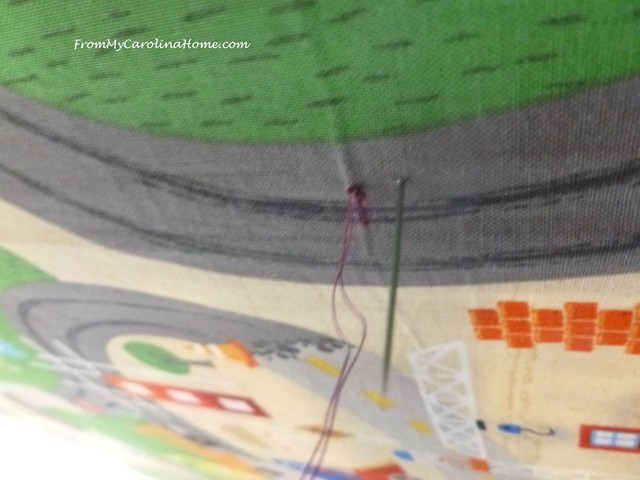 I checked the left/right placement. 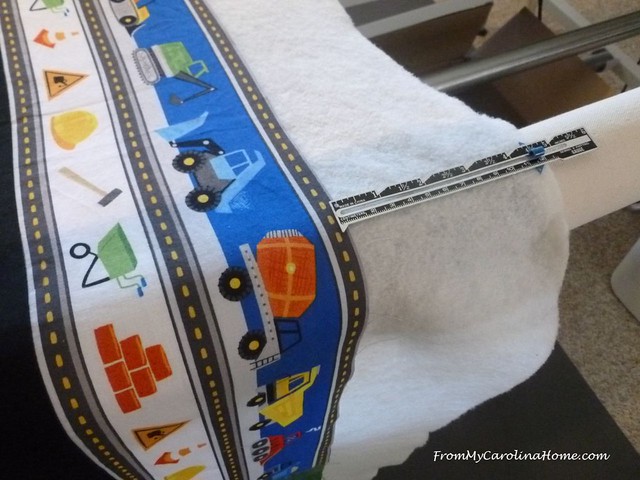 Then rolled it back again to the top.  Here is where I got nervous. 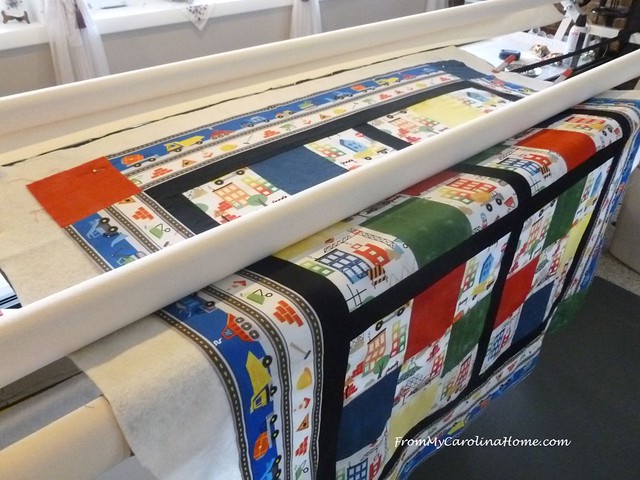 Rolling it down to check it again, the pin is now way off.  I think just the act of rolling it scooted the top enough to make this much difference.  Knowing that the quilting will also draw up the backing, I called my friend Terry to see how she handles this problem.  Her answer was to do the math, trust your measurements, scoot the top 1/2-inch higher than you think it should go, and start quilting.  Interestingly, this rule of scooting the top 1/2-inch up was almost exactly the difference in the pin check I did first. 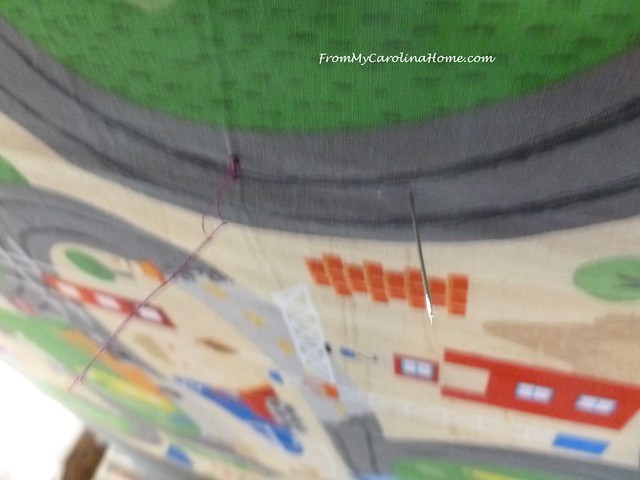 Trusting her advice, I did just that.  I remeasured the top spacing, scooted it up just a bit, and dove in quilting. 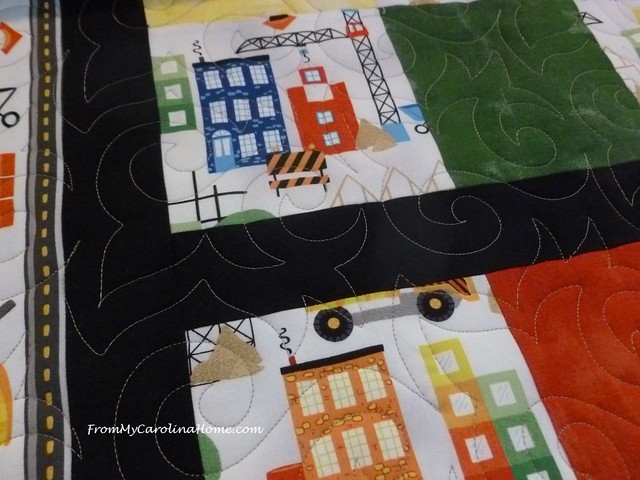 Quilting was done in Glide in a medium grey in both the top and bottom.  The color blended well with the cute cars and trucks print, and gave a nice texture to the sashing. 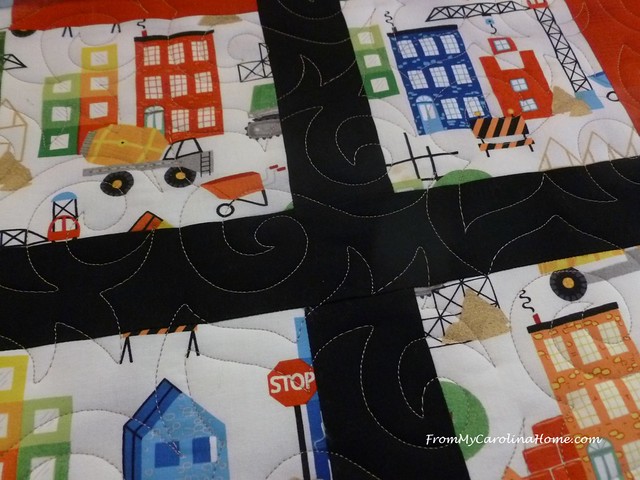 The pantograph is called Pipeline by Urban Elementz. 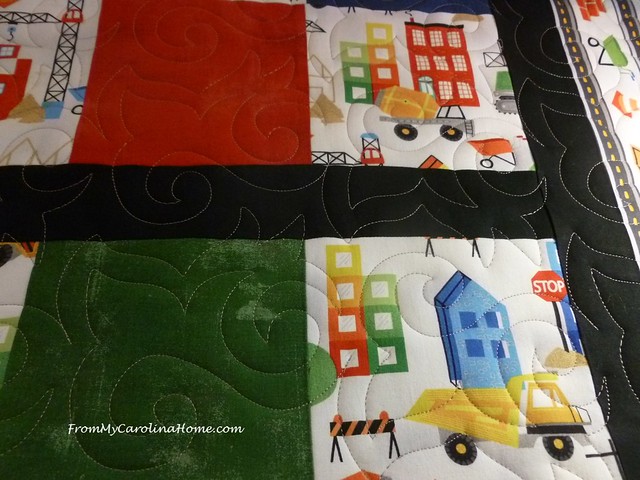 It quilted up in a short time, and I trimmed it. 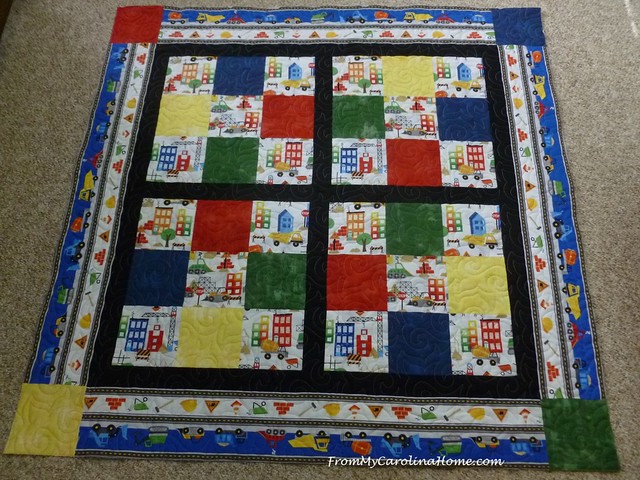 Here’s the back, not too shabby for centering.  It is slightly off center, but I warned her that getting it exactly in the middle wouldn’t be possible.  She was happy with the result, and certain that her grandson wouldn’t care. 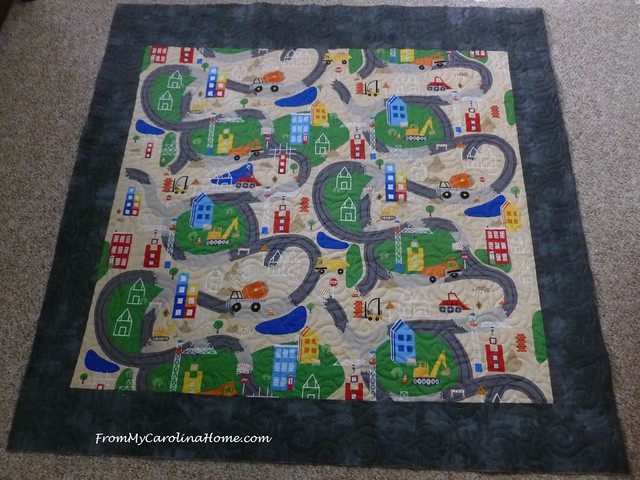 So, that was another learning experience.  Every quilt seems to teach me something.  What are you working on now?

18 thoughts on “Centering the Back on a Longarm”