It has been an up and down month so far for temperatures.  The warmth of February and the early part of March made for a lot of flowers blooming and bulbs coming up.  But today is the first day of spring, and I am so ready for the weather to be warmer! Earlier this month, my crocuses came out in glorious bloom. 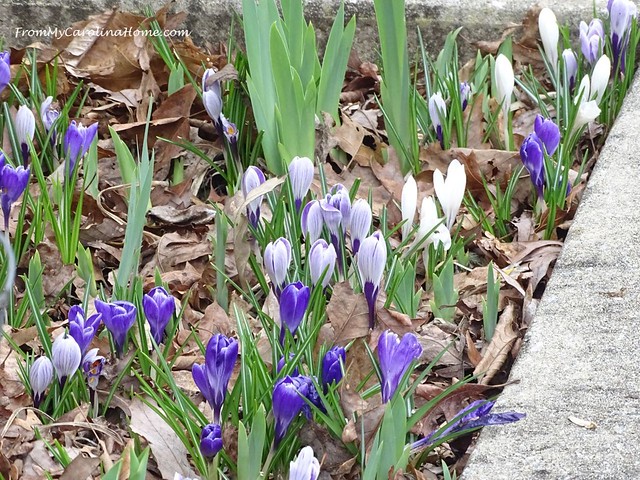 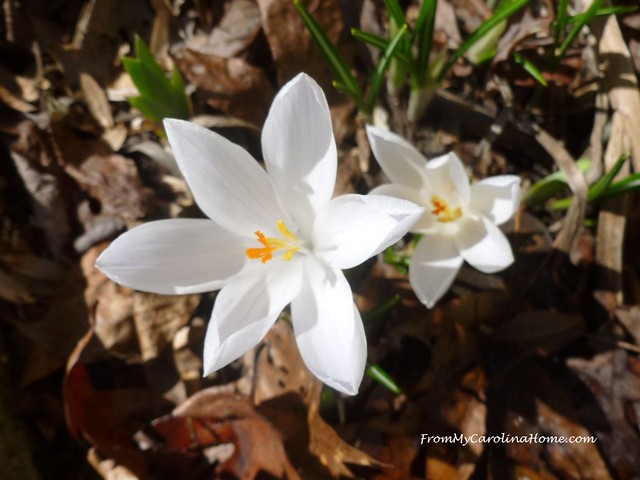 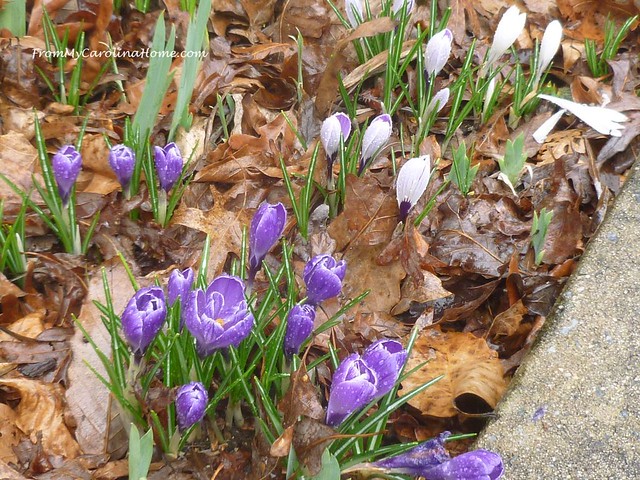 I think my favorite is still the variegated purple withe the golden stamens. 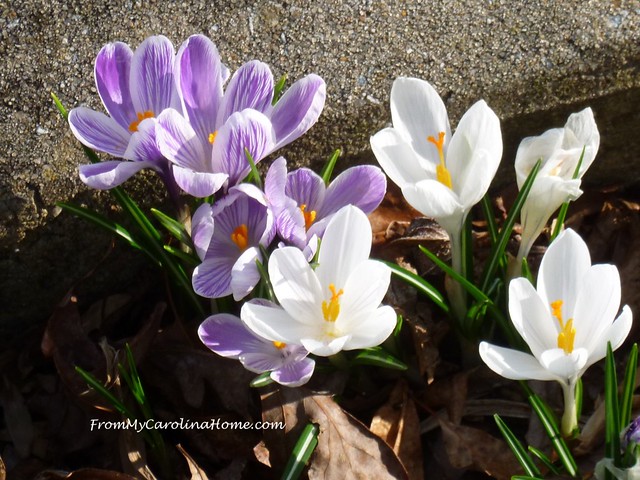 In a couple of days they all had fully opened.  Then we were going to be in the 20s for a few nights, so I covered up the other iris and hyacinth bulbs, uncovering them when the temps got above freezing at night.  The crocuses could take it, but I was afraid for the other bulbs. 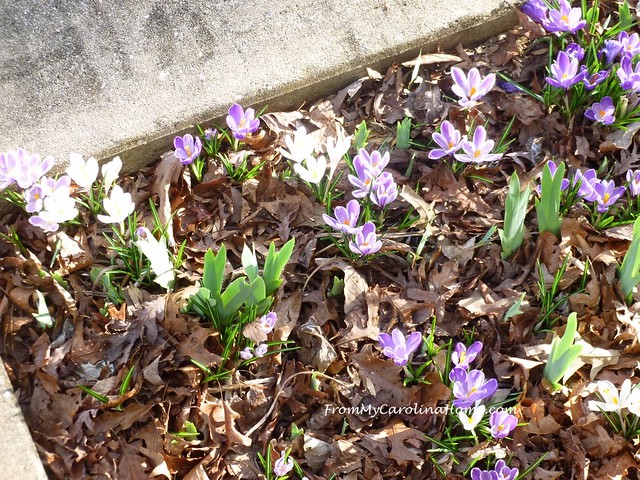 A clump of yellow daffodils bloomed in one area of the island in the center of the driveway. 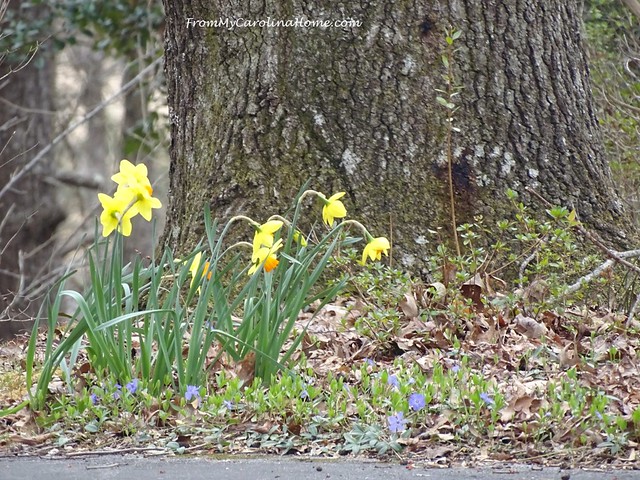 Vibrant yellow with orange cups, they are beautiful. 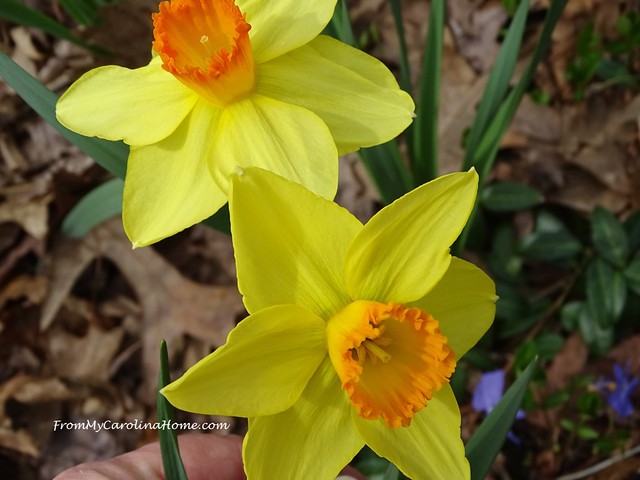 In another clump, white daffodils with yellow cups came into bloom at the same time. 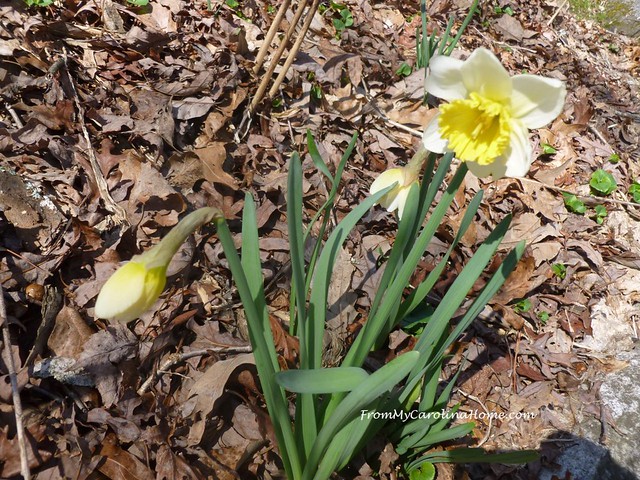 At the edge of the meadow, the cherry tree put on a show. 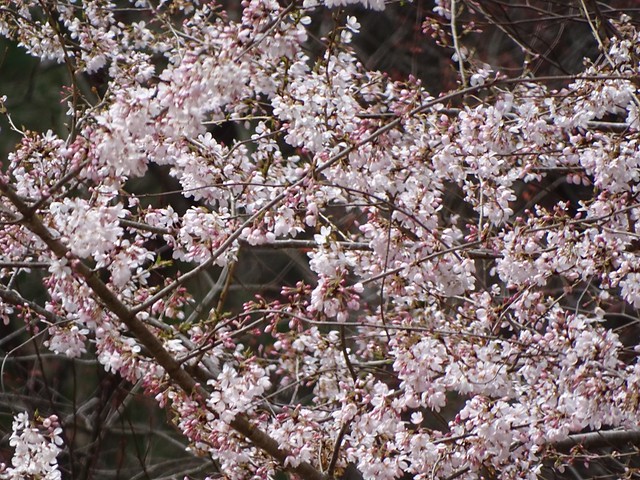 After weeks of not showing up, Clarence finally came back for a handout.  He gobbled loudly in front of the veranda to let me know he was back.  Of course, he got fed, half a slice of whole grain bread.  He came by several days in a row, but it has been a few since I’ve seen him.  I am just happy to know he is OK. 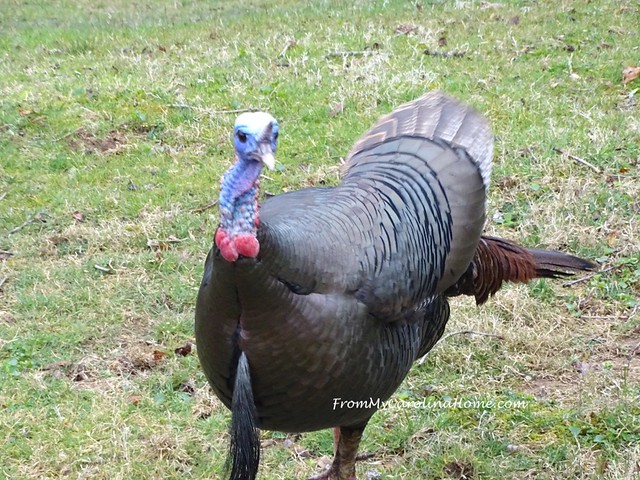 The hyacinths survived the cold, with this pink one coming into sweet fragrant bloom. 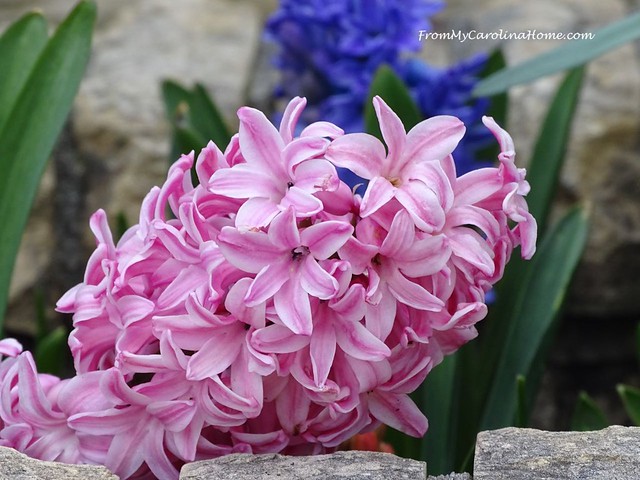 A blue one bloomed as well.  Two more darker magenta ones came out later.  The yellow one from last year hasn’t made an appearance yet. 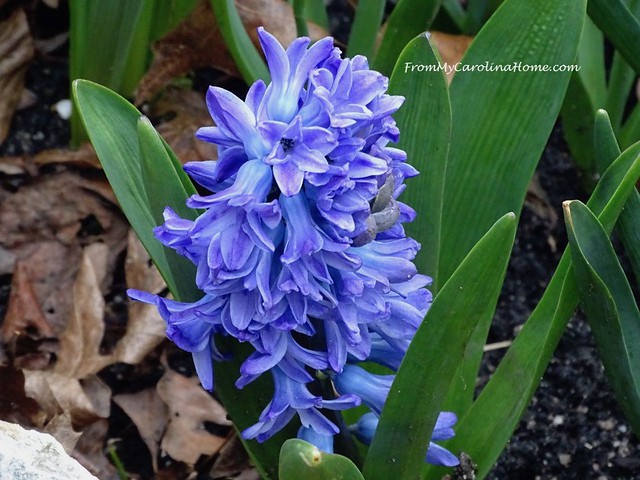 Next to the hyacinths, the double daffodils with their ruffled orange centers bloomed profusely. 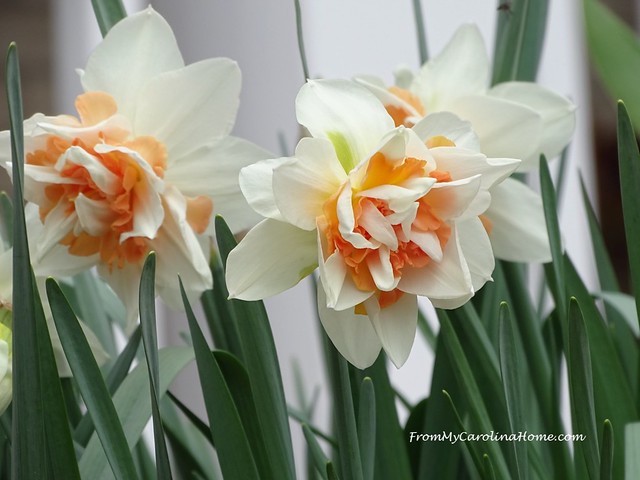 All around us, on the mountainside in the back and down the coves on both sides of the house, vincas are carpeting the ground.  They are a canvas of purple dots on a green background. 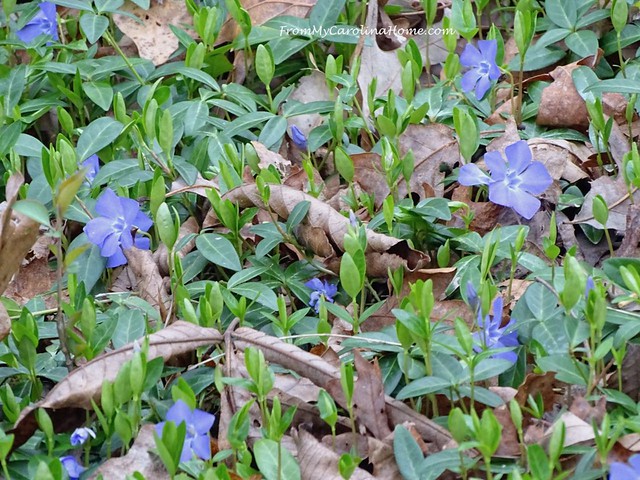 The cardinal pair are frequent visitors to the feeders that DH keeps full.  In fact, the variety of birds stopping by has been so varied, I’ll have to do another post just on birdwatching. 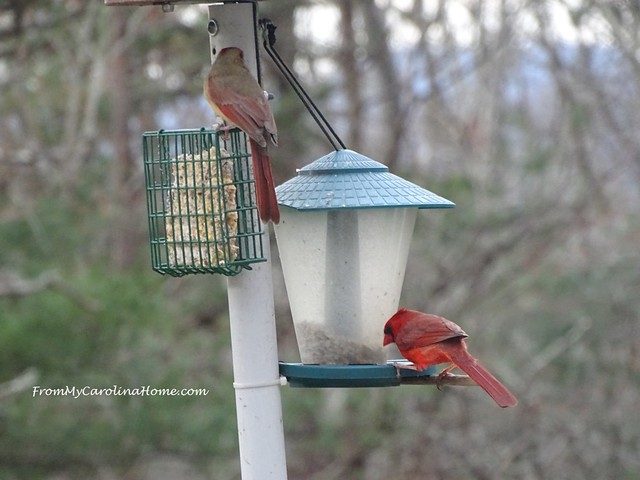 At the bottom of the meadow, next to the neighbor’s house, a pear tree is starting to show delicate lacy white flowers. 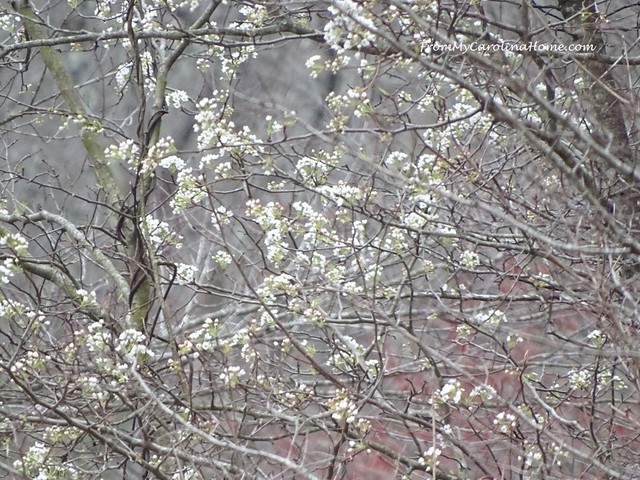 Down in the basement, my seeds are doing well. 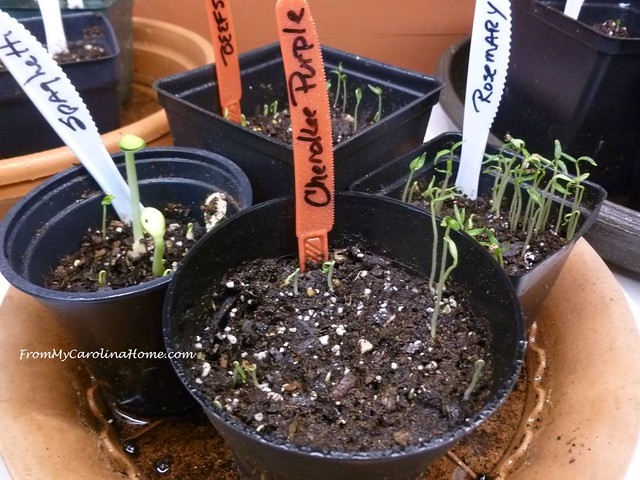 This is where I get to every year, then something will happen and the plants will mostly die off. 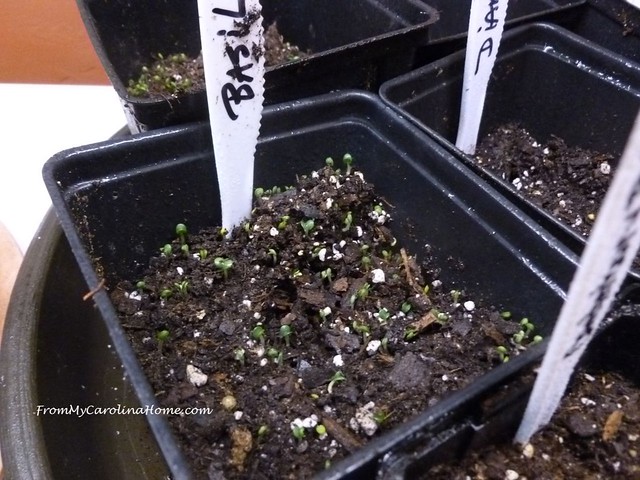 I hope this year I can keep them watered and not kill them. 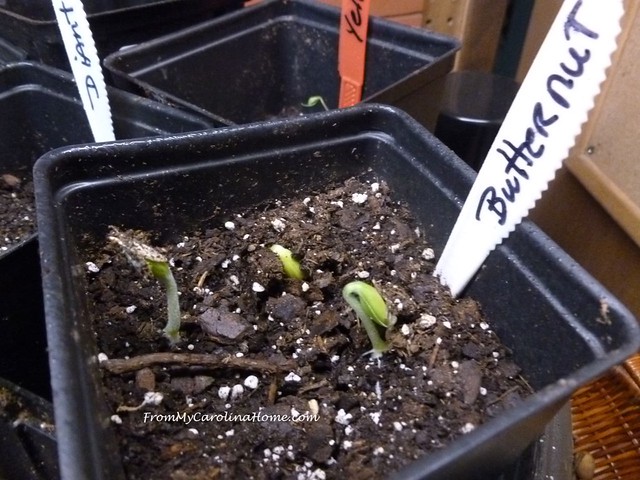 I have the grow light 16 inches away from them, but they still look leggy.  We will just have to wait to see if they make it this year.  I hope some do, as I have visions of tomatoes for this year’s summer recipes. 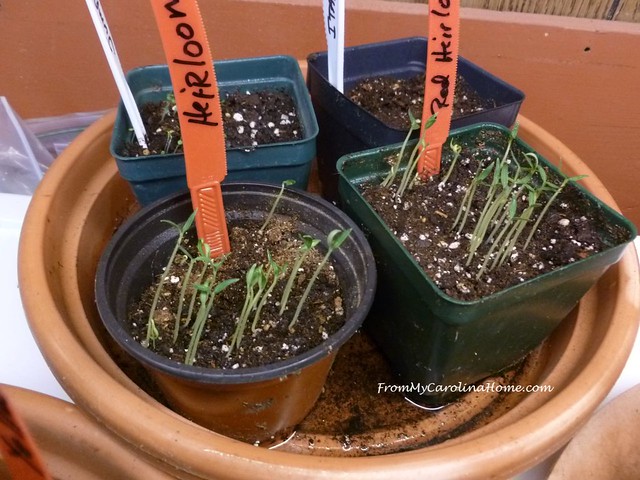 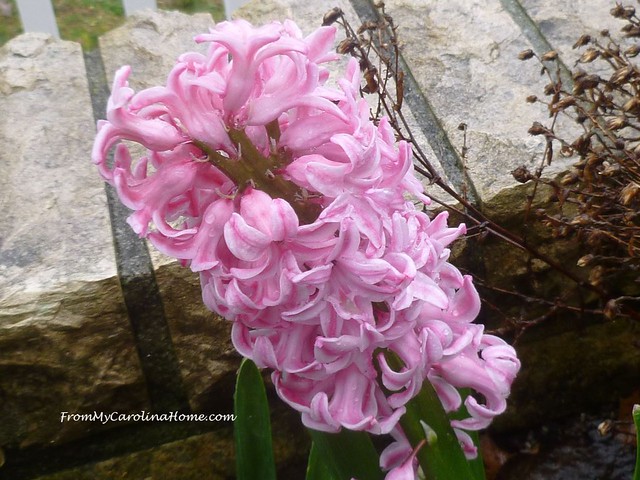 27 thoughts on “March in the Garden”