After a warmer than usual Autumn, we finally got a cold spell over the past couple of weeks, turning the remaining leaves pretty colors. Most of the trees are bare now, but a few remain here and there.  This picture is from the last week in November, early morning mist is settled in the valley with clouds low over the distant mountain ridge. 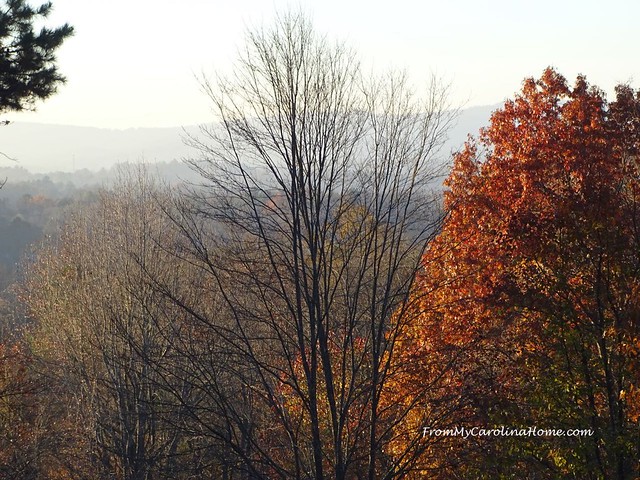 The deer are migrating.  This little group has been around most of the summer, and the little ones have finally lost their spots. 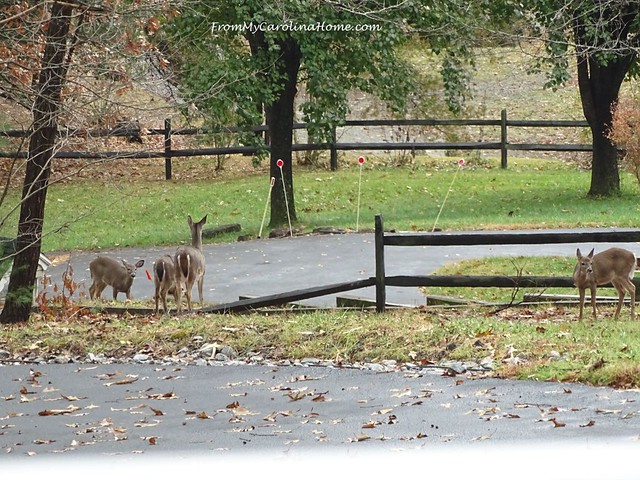 There are two adult females and three little ones. 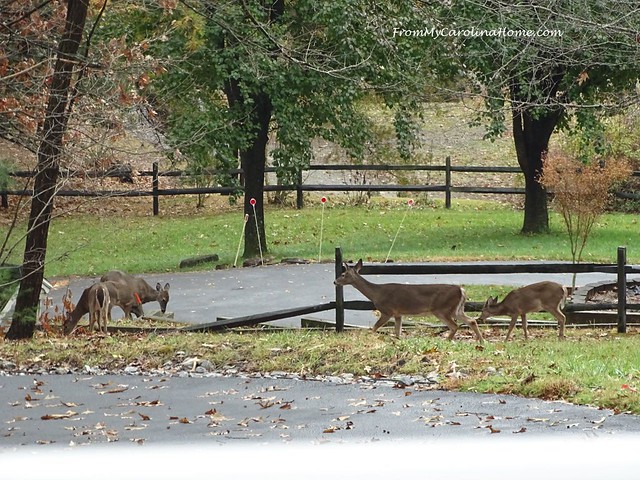 Clarence is getting really big!  He stops by several times a week for a bit of bread and to peck at the seeds dropped from the feeder. 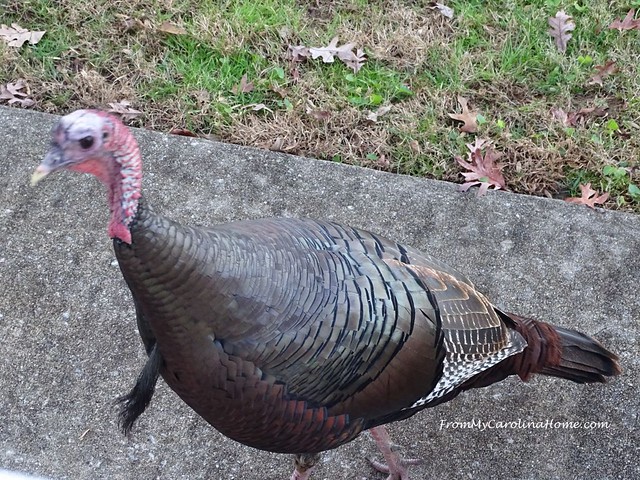 I think he spends the winter here.  He’ll get a bit of peanut butter on his bread handout if he is here when it freezes. 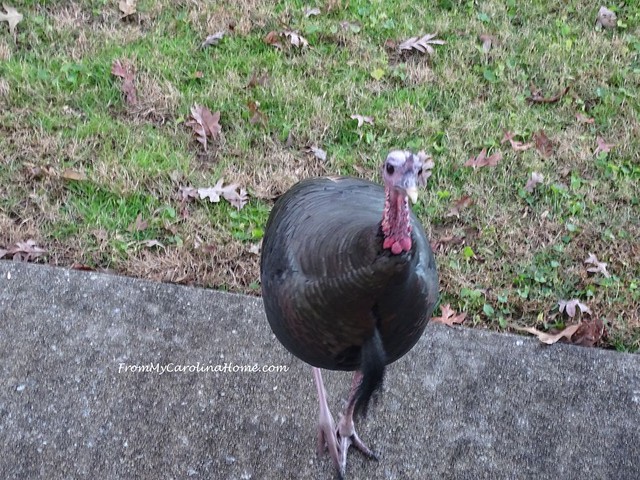 This guy is a new visitor, a young black bear.  He was here one morning with the idea of getting to our bird feeder. 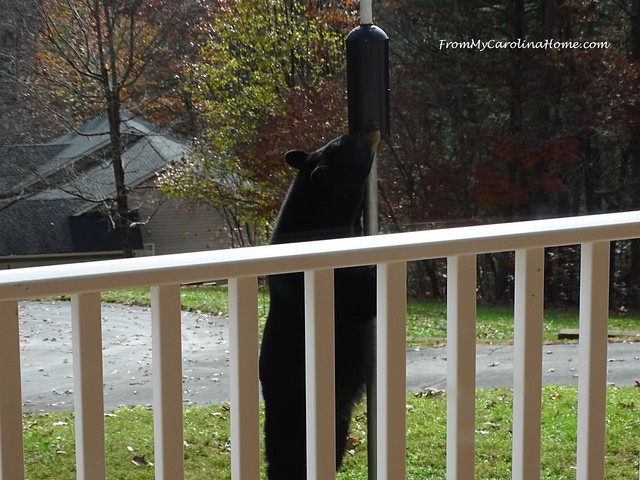 Fully stretched out, he is about 5 feet to the top of the head, and we think weighs about 100 pounds.  He was pulling on the pole, shaking it back and forth, trying to get the feeder to fall off the top. 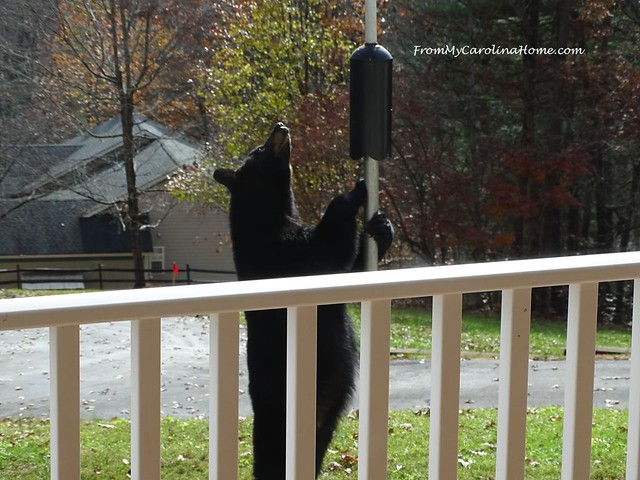 When that didn’t work, he sat down on the ground and used the pole to scratch his back.  We stood at the glass door and laughed at that. 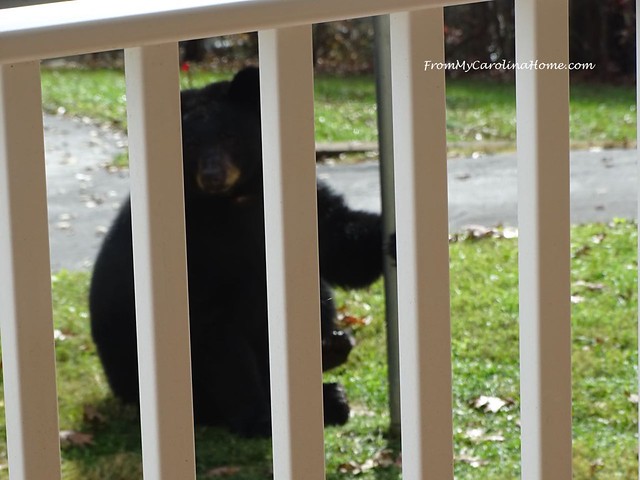 Then he got up for a second try.  At this point, I got out an aluminum pan and a wooden spoon, and stepped barely out of the door to bang them together to make a lot of noise.  I was really surprised that he wasn’t that startled by that, and only stopped to look at me.  Usually any loud noise will scare them off.  DH and I began to shout and make more noise, and he decided then that it was too much trouble and ambled off. 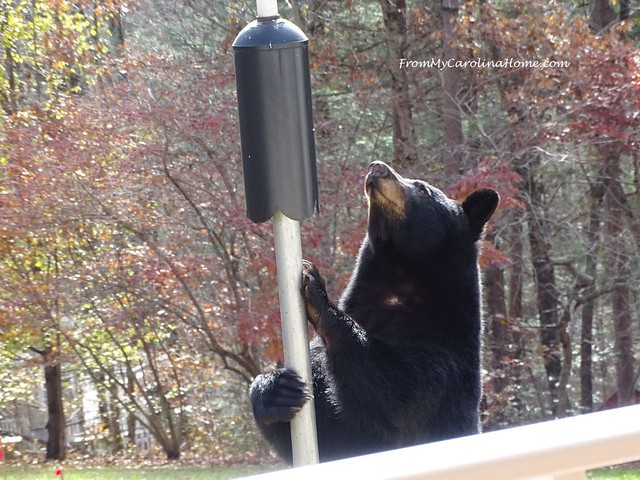 Up on the feeder, lots of little birds were chowing down. 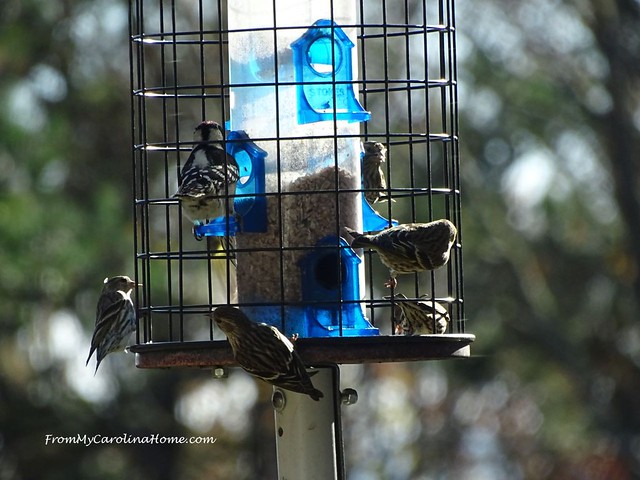 We have a bluebird who has been here for a couple of weeks. 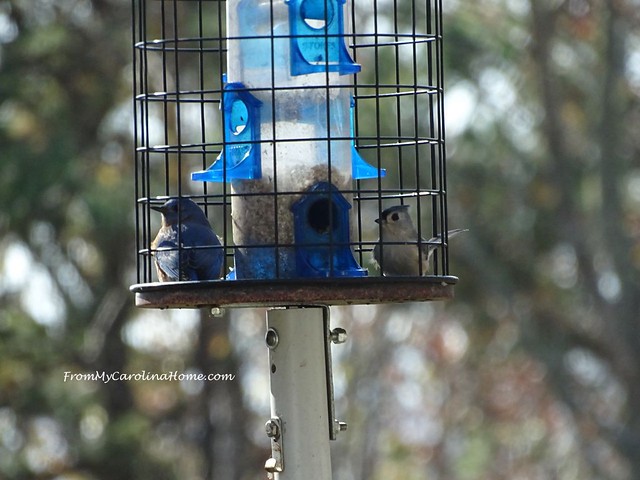 The little goldfinches have almost completed changing to their winter colors. 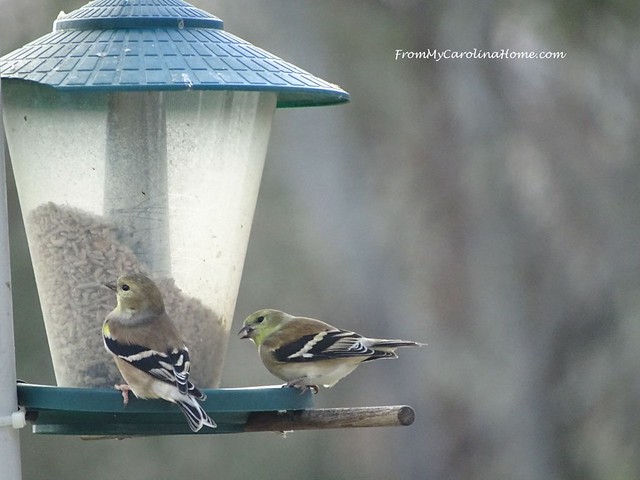 A woodpecker stopped by too. 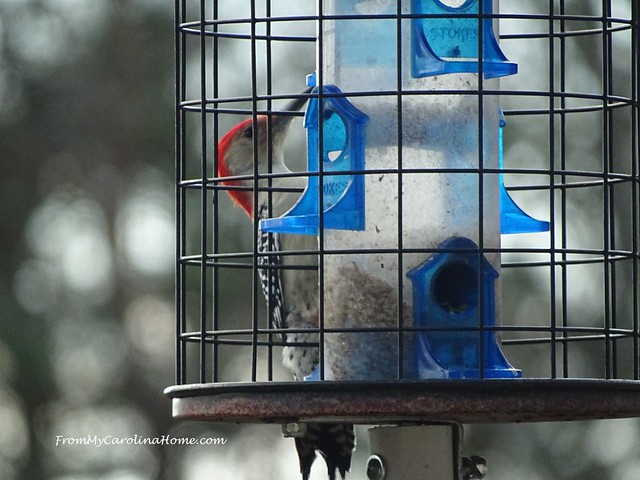 Inside, my Thanksgiving cactus bloomed beautifully, with red flowers on one side… 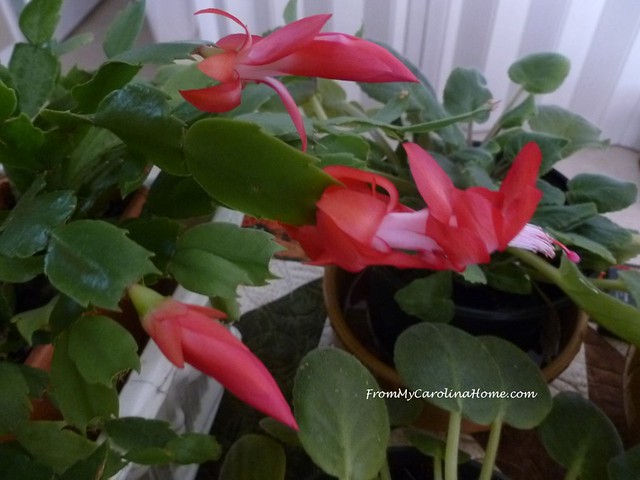 and gorgeous fuschia on the other. 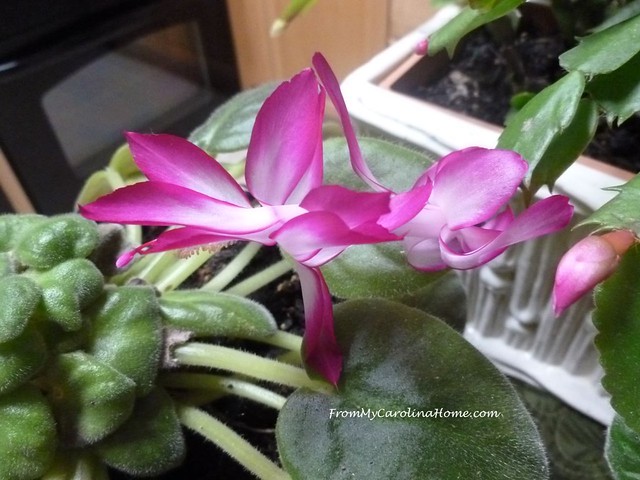 A pretty white bloom with a blush of pink flowered a day or two later.  There are many buds and it may in fact bloom again before Christmas. 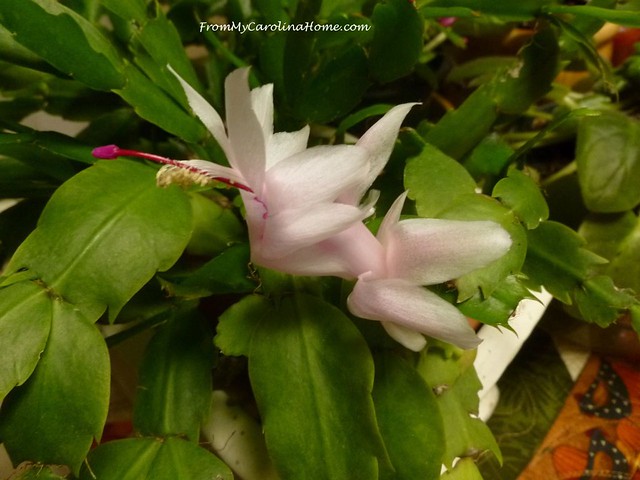 Yesterday, the snow began in the afternoon, and by evening it was starting to stick. 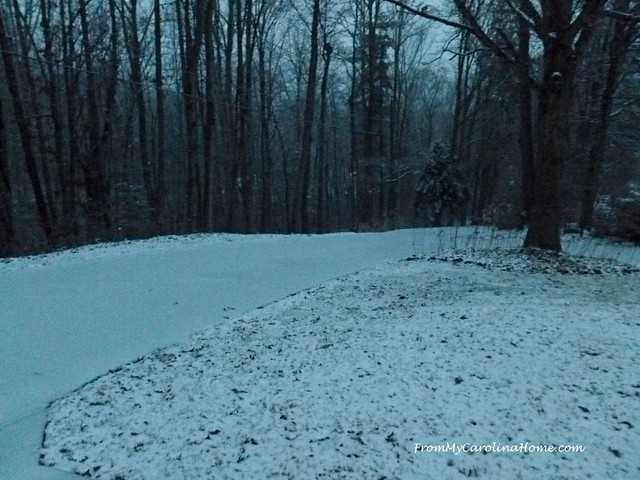 I made a suet cake for the birds as I knew the next day they would need the extra calories. 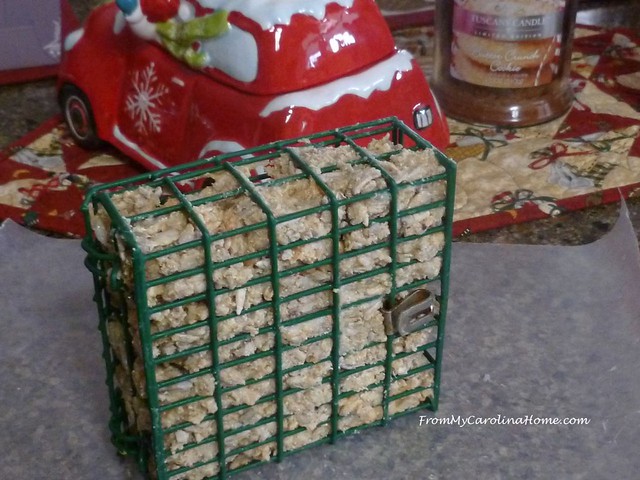 Then, this morning, we woke to this – 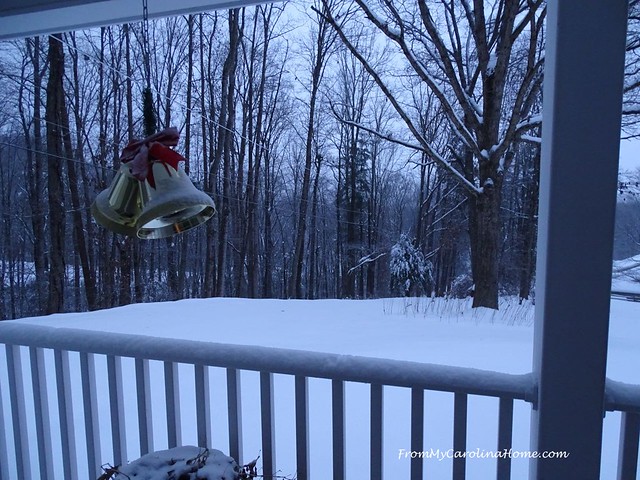 I didn’t measure it yet, but I think the forecast of at least 10 inches of snow was right. 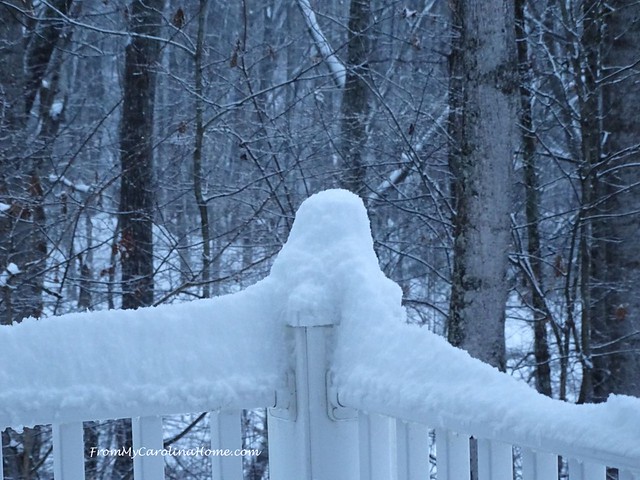 The birdfeeder had snow in the bottom, and was covered in little birds trying to get a meal on this cold morning. It is sleeting right now. There’s a junco on the lower feeder, must be hungry as they prefer to eat off the ground. A bluebird hangs off the suet feeder.  DH put on his coat and went out to clear it off before he had breakfast. 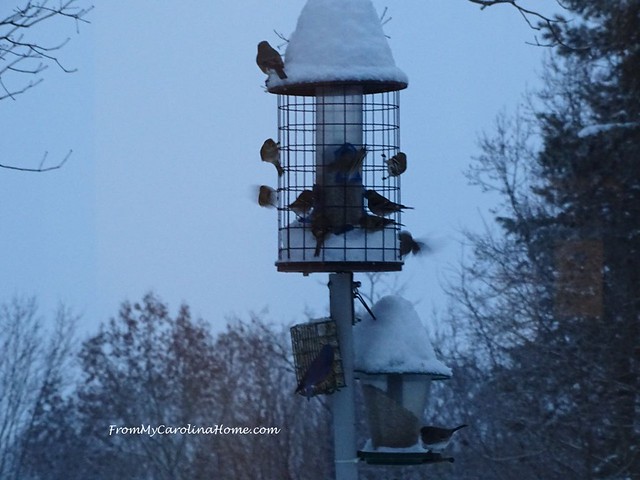 We are warm and dry inside today, and the power is still on. I made Blueberry Turnovers for breakfast and we are nicely supplied to be snowed in for several days.  I plan lots of football games today, Christmas movies tomorrow with lots of sewing, stamping, crafting and creating two tablescapes.  I hope you are having a nice weekend, what are your plans?

23 thoughts on “Beginning of Winter”