Our Mini Cooper club had a fabulous Christmas event last weekend, with several meals and events planned from Friday night to Sunday afternoon.  We caught up with them on Saturday morning in a local parking lot to decorate our cars for the Christmas parade.  The weather did not cooperate, and it began raining while we were trying to get the cars ready. 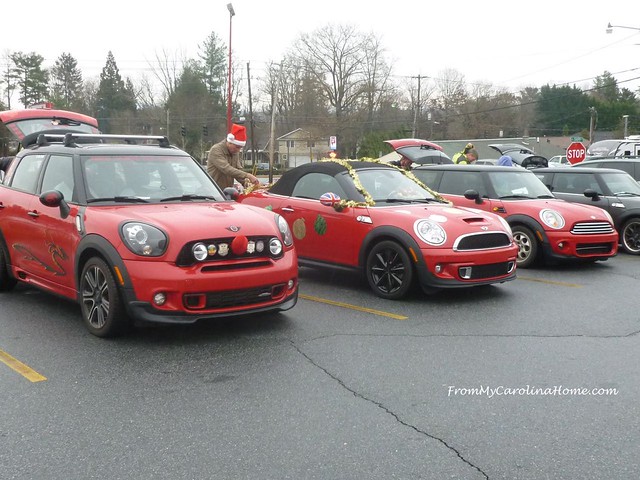 We did what we could, and then were sent over to the staging area on Oakland for the parade.   There are some wonderful historic homes on this street.  We were near the end of the parade.  That’s our red car in the front.  I made Christmas ball ornaments out of magnetic sheets.  I cut out the shapes, then glued metallic wrapping paper to the top, and added details with a sharpie pen. 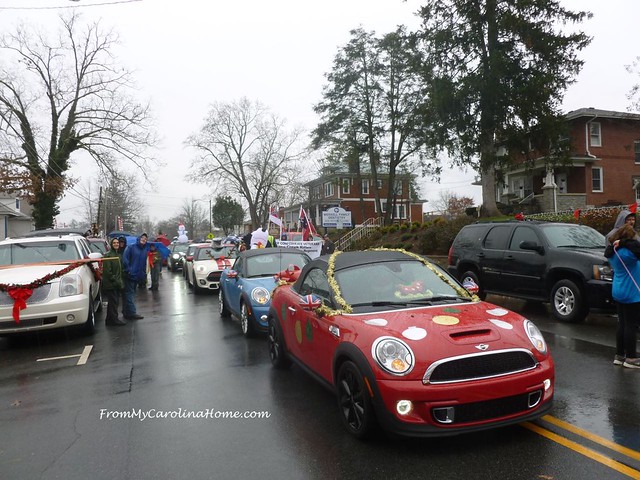 Here we are coming down the middle of Main Street in Hendersonville. 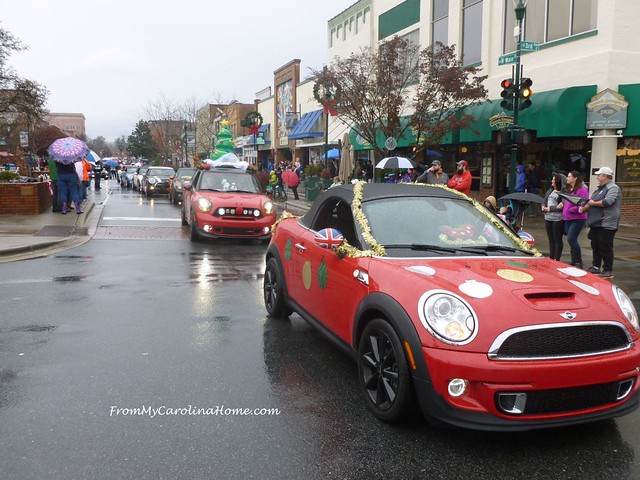 Crowds were a bit sparse, but the rain stopped and we were able to roll down the windows to wave and play music.  A couple of our club members were walking with us to hand out candy to the spectators. 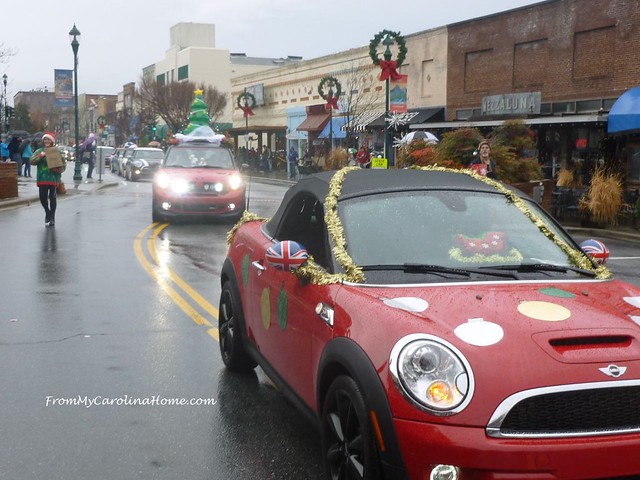 After the parade, we stopped to remove all the decorations off the cars, then drove to Lake Lure for our stay at the 1927 Lake Lure Inn.  The Inn opened the same time as the town was incorporated.  The architecture was in an Italian stucco design, and the town was to have many additions in that style.  The stock market crash of 1929 derailed the plans for a full resort town, but the charm of the decade remains in the inn. 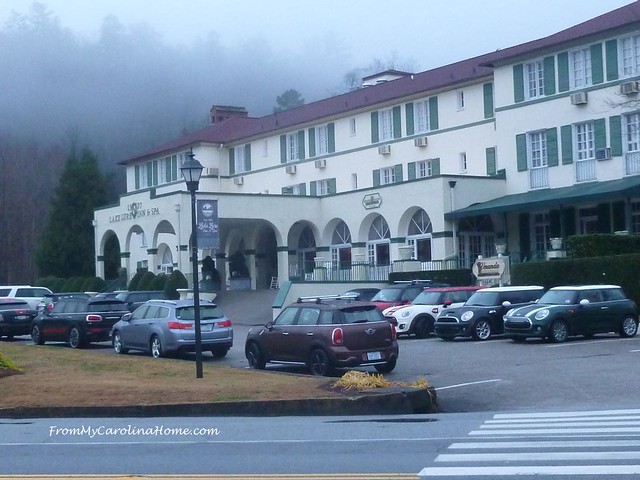 This wonderfully historic inn had lovely four poster beds, comfortable and clean.  The inn does a great job of keeping the rooms freshly painted and inviting. 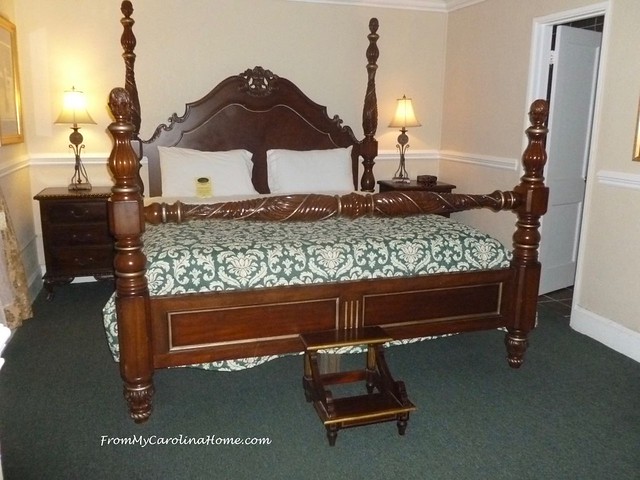 When was the last time you saw an actual key for a hotel room? 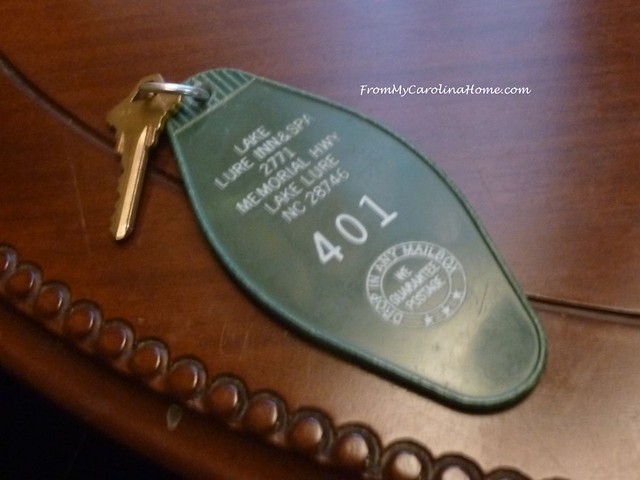 This photo of the lobby and their tree was blurry, but I wanted to show it to you anyway.  The lobby is full of antiques and the walls are decorated with so much history!  Many newspaper articles and photographs from when the inn served the troops during World War II. 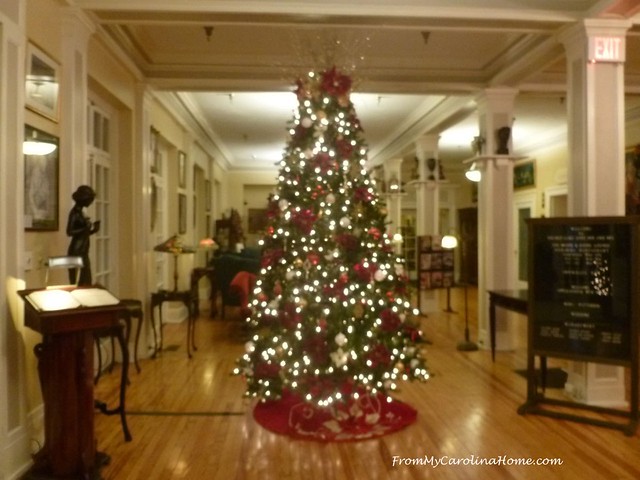 Antiques and art were on every wall and corner. 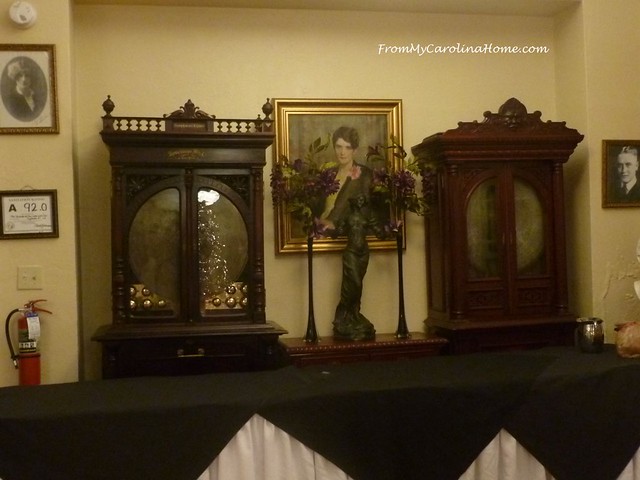 They had two really impressive music machines.  The beautifully detailed music box on the right plays with very large metal discs, seen at the bottom.  The huge 9-foot tall piece on the left is an Imhoff and Mukle Badenia II Orchestrion music player.  The machine has the sounds of a snare drum, a bass drum, a 44-key piano, a 52-violin-pipe organ, a cymbal, and a xylophone and plays with the use of parchment scrolls.  I found a Orchestrion video of another model made by the same German company so you can get an idea of what it does.  The video is about three minutes and will show you the workings inside as it goes.  It is kind of addicting, LOL, and I’ve watched it several times now.  I swear by the end you’ll want to get up and dance.  The Lake Lure Inn Orchestrion uses pneumatics, while the video shows one using pulleys and mechanical controls.  We are hoping to arrange to see it operate if the club comes back to the Inn next year. 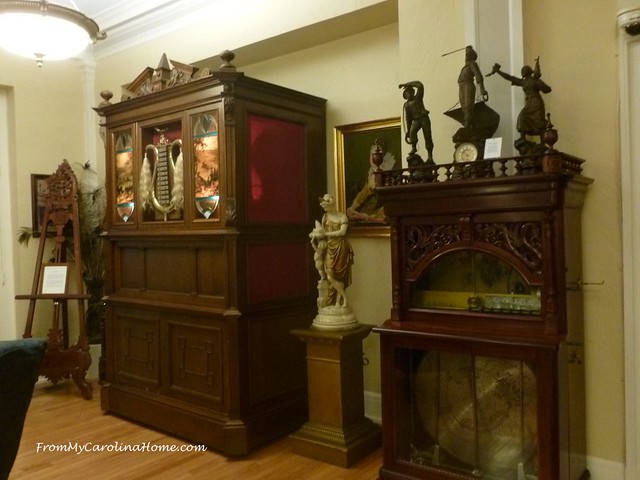 There is more on the history of the inn in an Our State article online. 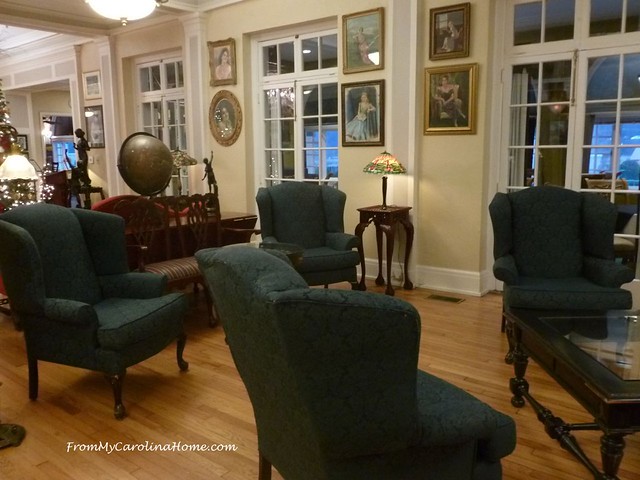 The historic marker outside tells much of the story.  Many of you may recognize the area as the location for filming the original Dirty Dancing movie.  The stars and much of the crew stayed here during the production, and the rooms where the stars stayed are now designated as Johnny’s room and Baby’s room.  There’s also a legend that some of the rooms are haunted, but I didn’t see any ghosts. 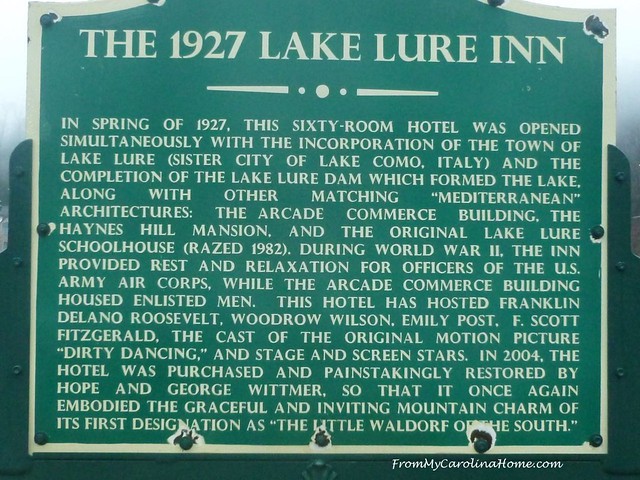 Saturday evening was the Christmas Party for our Mini Cooper car club.  We had a cocktail hour with bidding on silent auction items followed by a sumptuous buffet dinner, then reindeer games that had everyone on the floor laughing, and an hysterical game to determine who got what package in the gift exchange.  Some of our members continued the party in the bar afterwards. 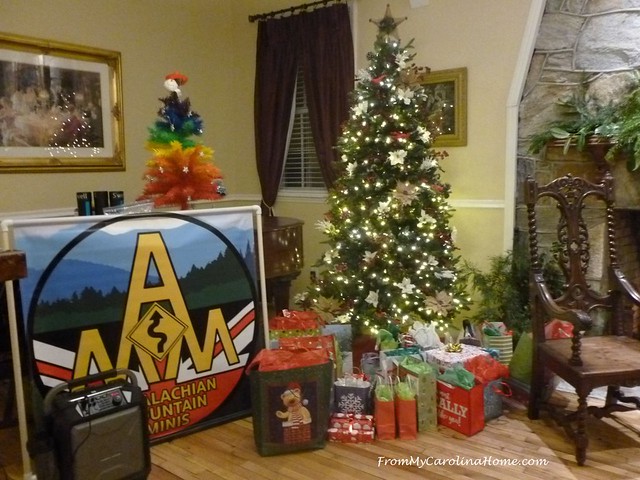 One of my silent auction offerings was a box of a dozen Chocolate Covered Oreos with my Nine Patch Christmas table runner.  The other had a smaller box of chocolate covered oreos with a Lenox bud vase and a Christmas ornament in a red and green basket. 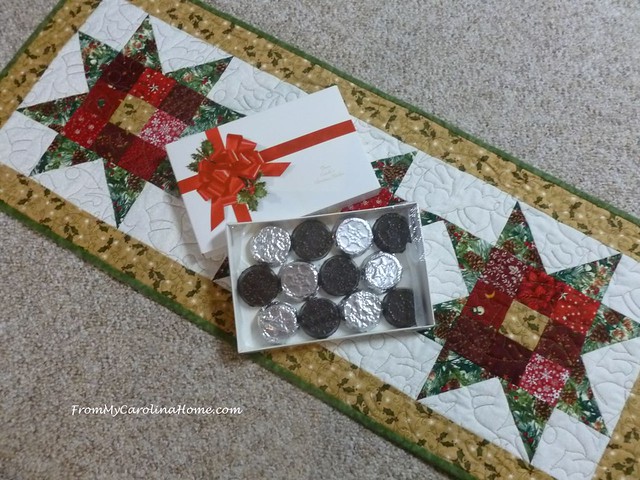 I was delighted with the gift I received, a darling collectable Mini Cooper Christmas ceramic cookie jar.  Isn’t is precious?  There’s a snowman leaning out of the driver side window, packages on top and a wreath on the front.  So cute!! 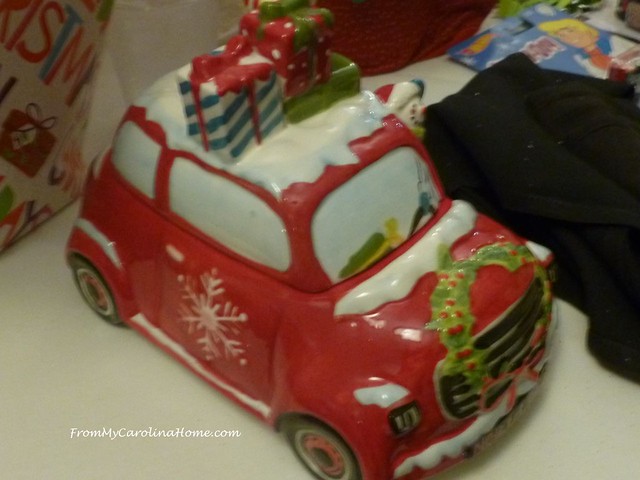 Across the lake early on Sunday morning, the gazebo (also seen in the film) was shrouded in fog. 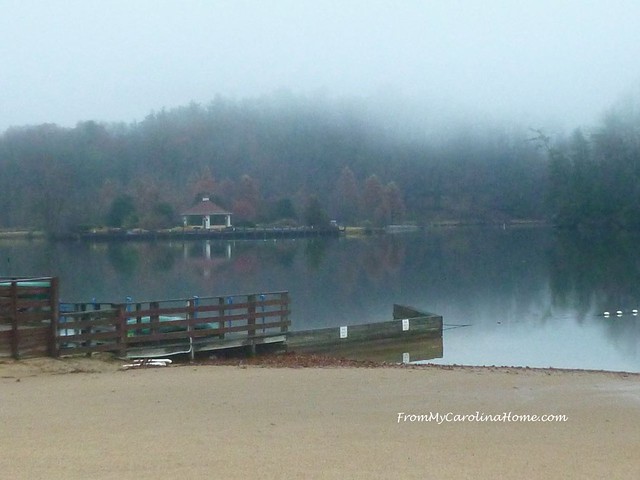 The mountains disappeared into the mist, as fog settled between the layers. 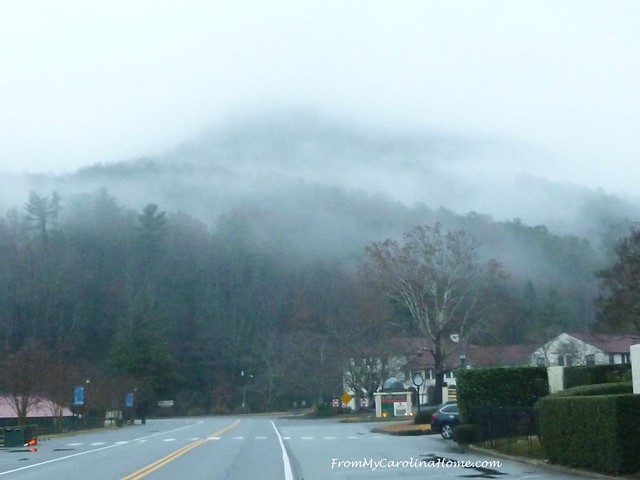 Beautiful and serene this quiet morning. 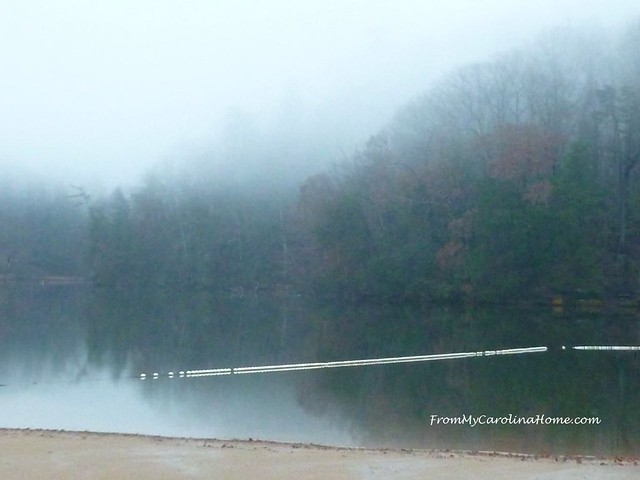 We were gathering after breakfast, a bit later in the morning, as the Saturday night party was pretty wild with lots of fun with the Reindeer games, LOL!! 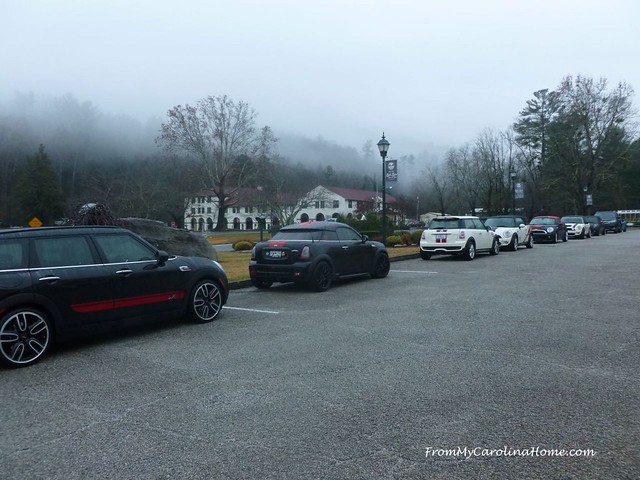 The Sunday drive took us just over 60 miles in a loop around the mountain roads.  Here we were coming into the town of Chimney Rock. 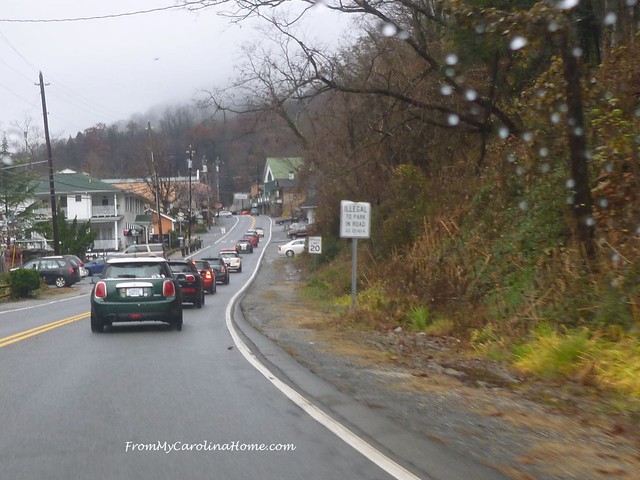 As our autumn was a bit later than usual, some color still remained.  It was a misty and drizzly day but we enjoyed seeing the scenery. 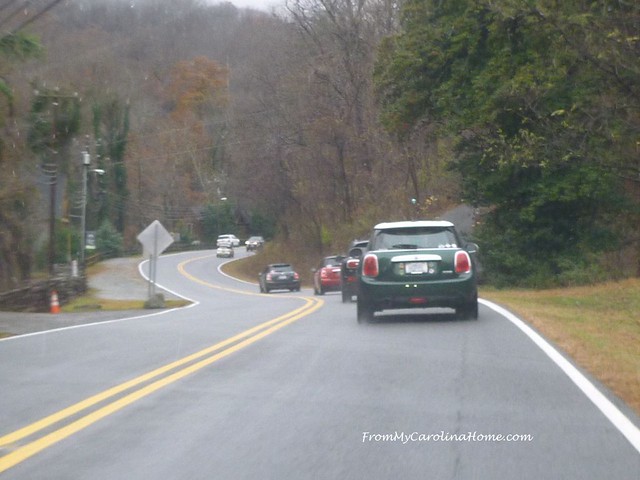 We love these twisty mountain roads, and we had to take extra care with wet roads. 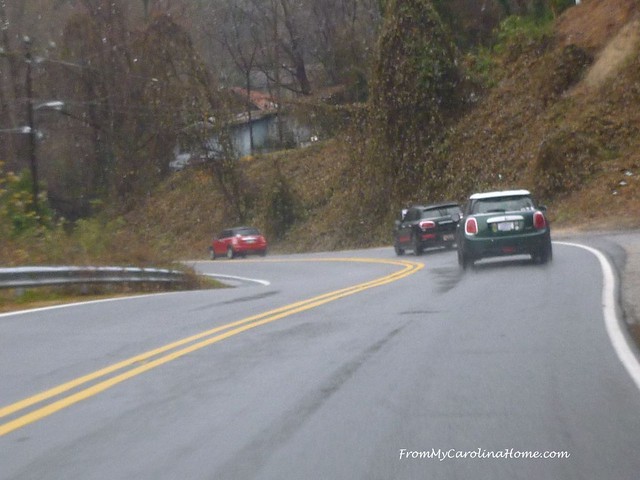 The cleared off hillside on the right was the site of the landslide that closed Highway 9 for a couple of months.  They did a nice job of putting it in order. 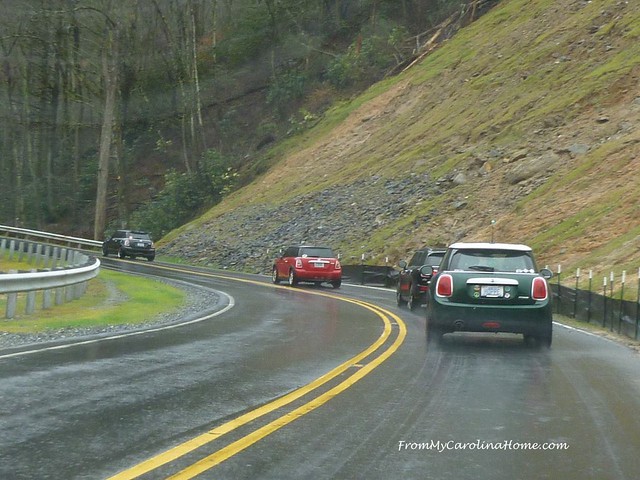 Back home again, it was a fabulous weekend.  There’s another more elegant gathering for next weekend, and couple of Christmas luncheons yet to come.  I love the holidays!!  Are you having fun this season?

Sharing – Take Me Away!