We went to the fair multiple times this year.  Between the days to take in competition entries, pick up days, cooking contests, volunteering in the log cabin Heritage Center in the quilting booth, and a day just to see the sights, it has been non-stop for the past two weeks.  We don’t ride the rides or do the midway games, but even so there is plenty to do!  I like watching the crazy people on those rides. 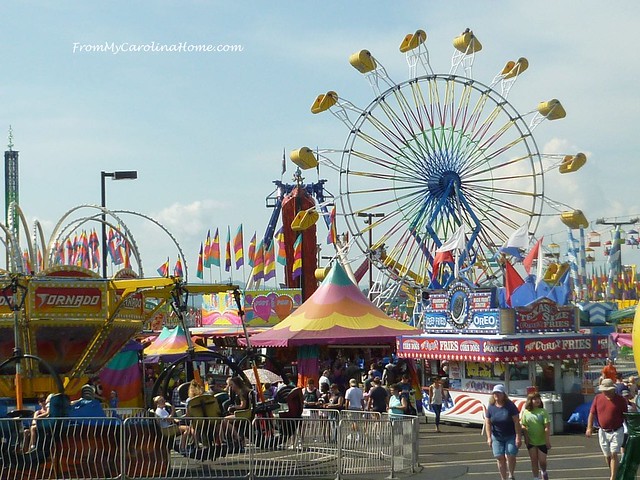 We heard a bluegrass band play one evening… 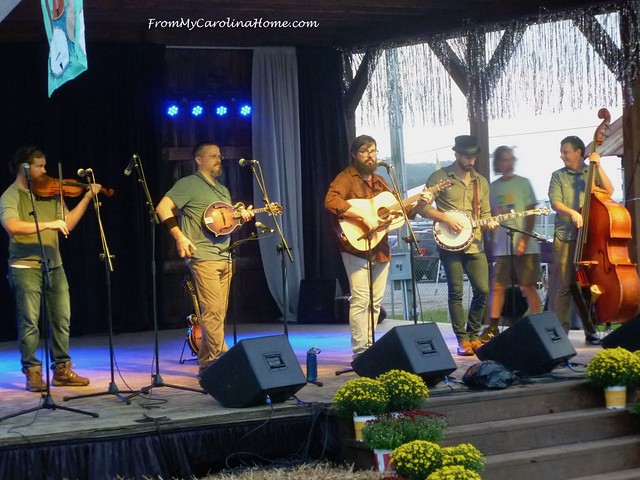 and a trio on another night. 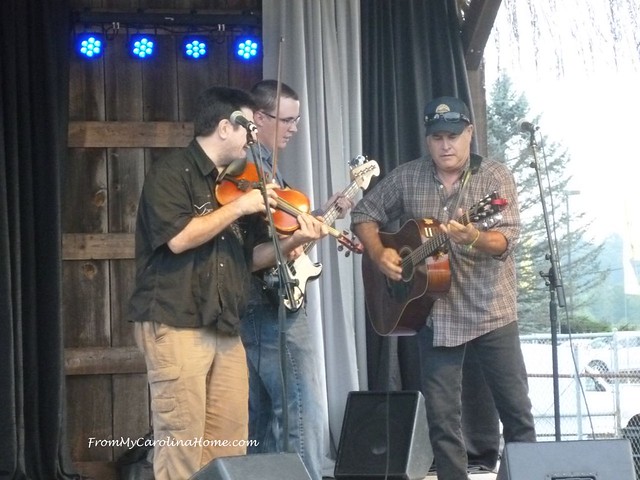 We watched the llama competition as they had to navigate an obstacle course. 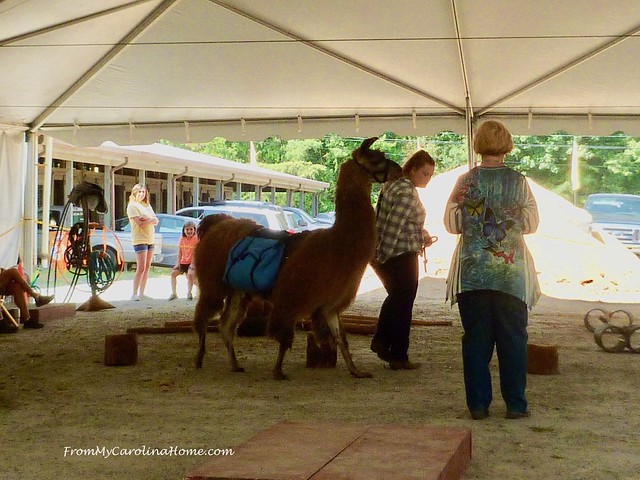 We missed the chicken judging, but this guy was literally crowing about his ribbon. 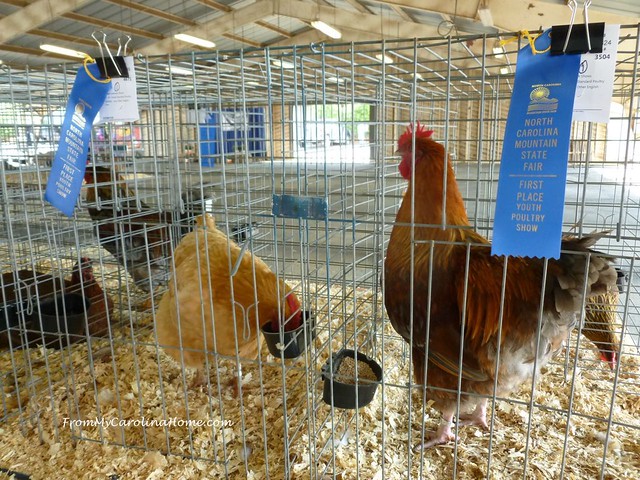 The cloggers have so much energy!! 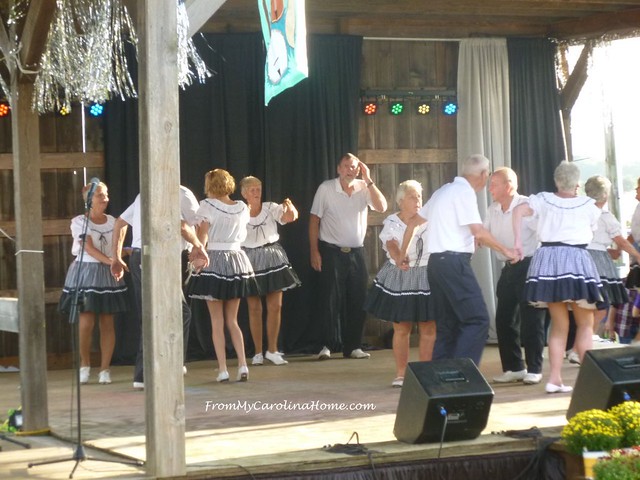 One of the new things at the fair this year is the Monarch exhibit where you can go inside the netting and feed the butterflies.  They get nectar that you hold out on sponge brushes to them.  At one point I had four of them on two sponges, and no hand free to take a picture.   The day was overcast, but the colors can still be seen on these beauties. 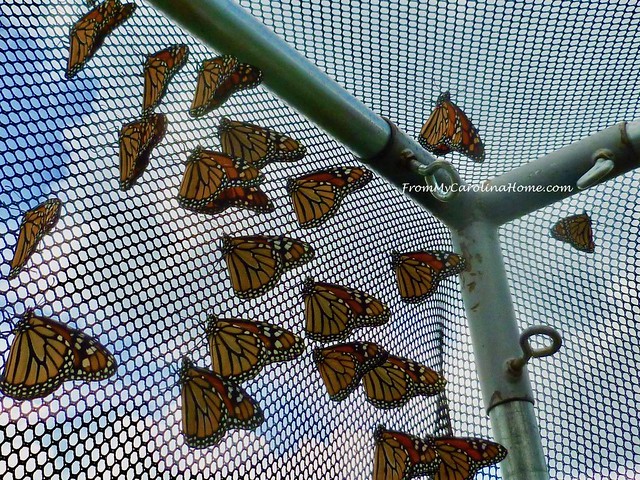 Then we watched the guy cook molasses for a bit. 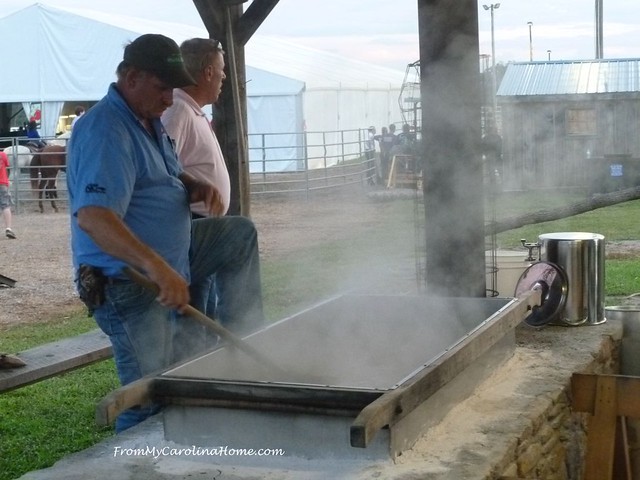 DH wanted to watch this guy cut planks of wood from tree sections. Men love machinery, don’t they!  The saw blade could move from vertical to horizontal, and he deftly switched back and forth to cut long boards and trim size pieces. 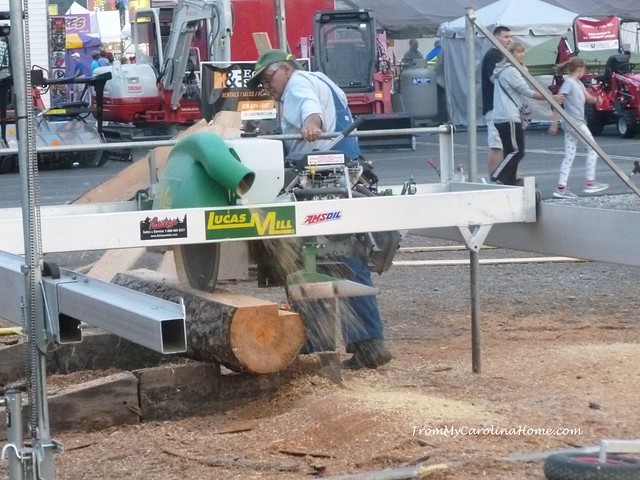 For the competitions, I ended up with 26 entries, and about half won ribbons. None of my photography entries made the grade.  I’ve already shown you a few of my ribbon winners, and I thought you’d like to see how the other quilts and crafts did.  Sakura Tsuki won a third place! I was surprised to see that the ribbons are rosettes this year in the quilting division. 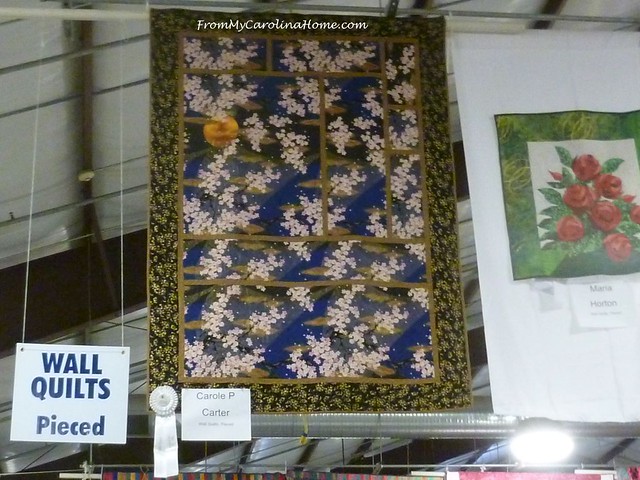 Square Dance won a second place ribbon.  I entered five quilts and three of them placed. 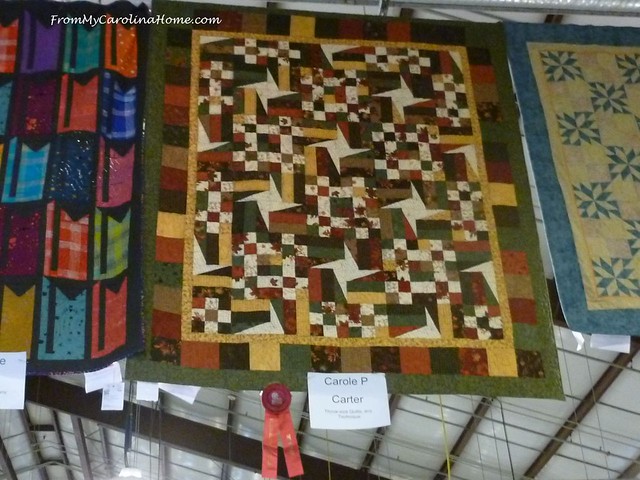 In the clothing division, my set of Caliente chili pepper purse, Caliente hat, and sunglasses case won a first place, and a Judge’s choice!! 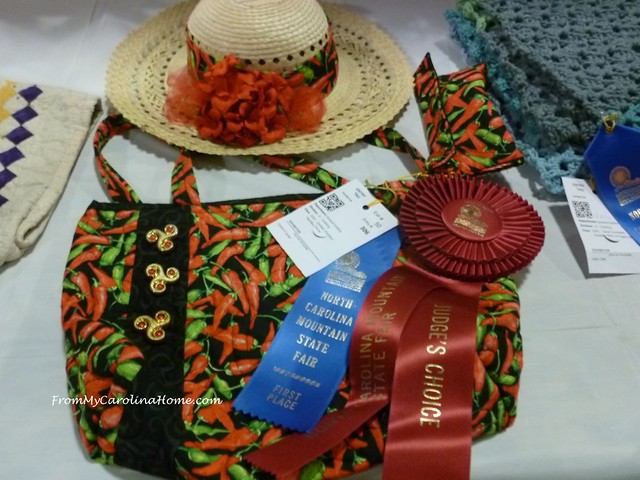 In the crafts division, Stars On Autumn Lane from last year’s Autumn Jubilee snagged a second place for a Quilted Item. I had to put a lot of things in crafts as I ran out of quilting categories. 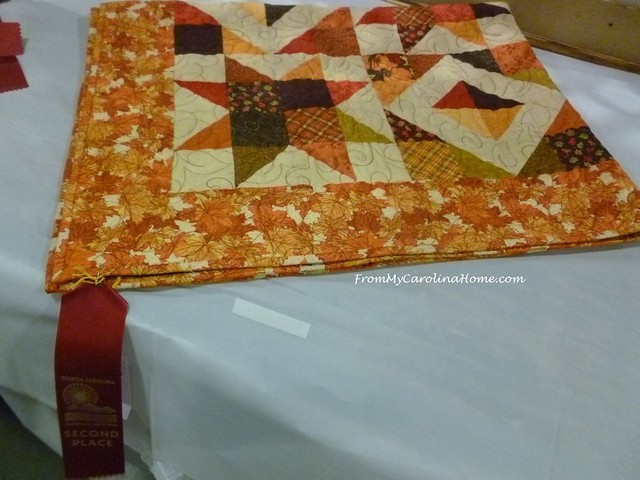 Also from last year’s Autumn Jubilee, the Wool Stitch Along project of a wool penny rug won a second place ribbon too. 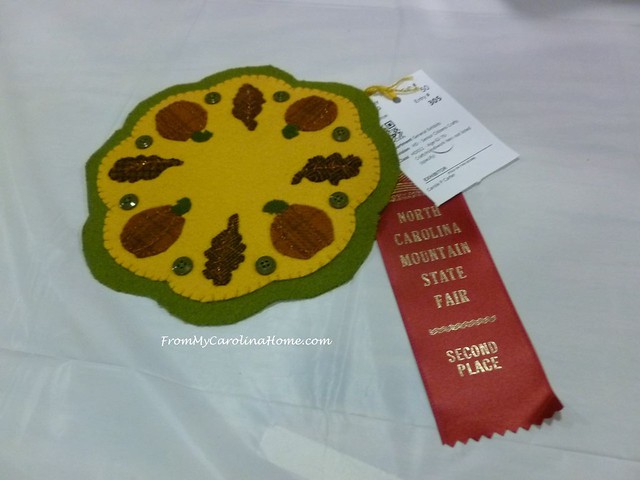 My Bird Nest Art Project project got a third place in Natural Materials. 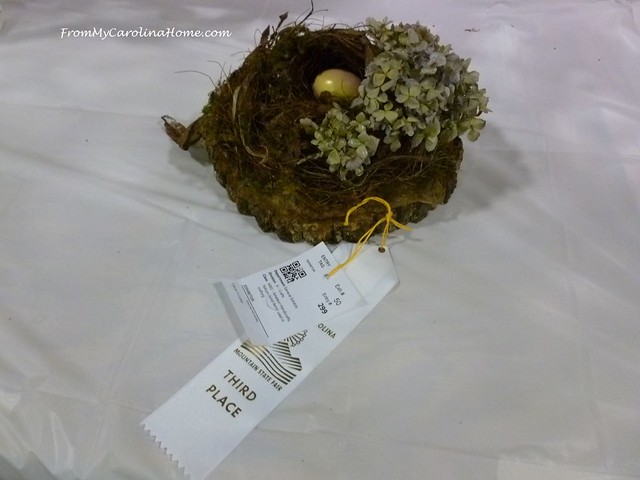 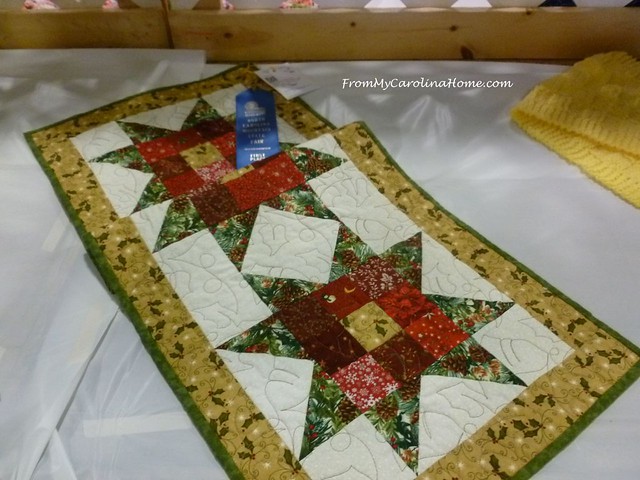 At the last minute, I decided to enter my Watering Can into Metal Painting, and got a first place and a Judge’s Choice too!! 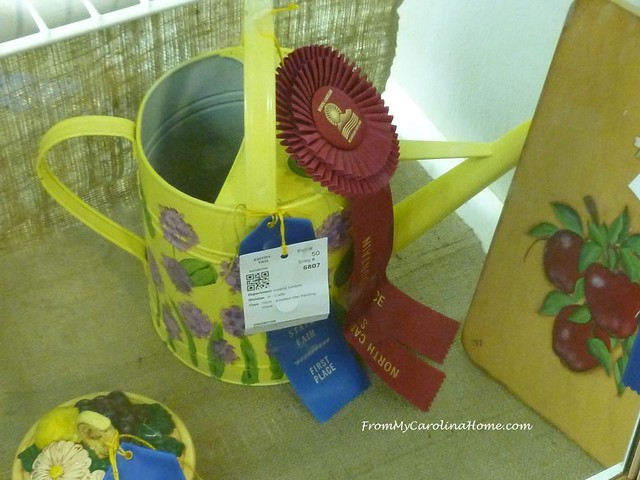 The Colors of August placemats and improv table topper set from my blogger bundle with Bernie was awarded a first place in Table Linens plus a Judge’s Choice. 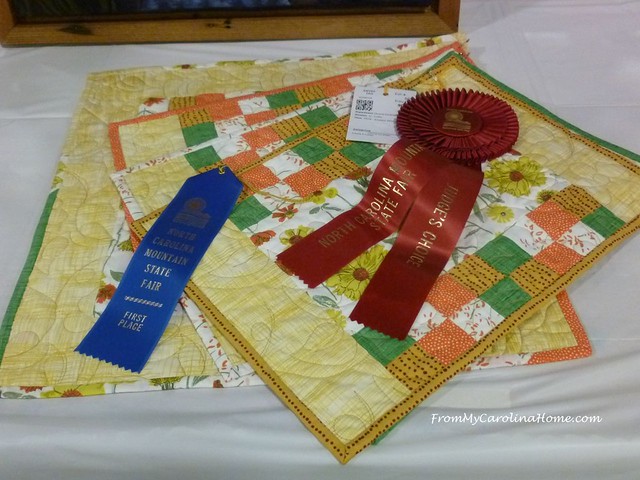 This was my first year to do a shift in the log cabin where the Heritage Crafts have booths.  There are woodworkers, dulcimer makers, glass blowers, ceramics, doll makers, knitters and weavers, and more.  In the quilting heritage booth, there were two raffle quilts from our local clubs. 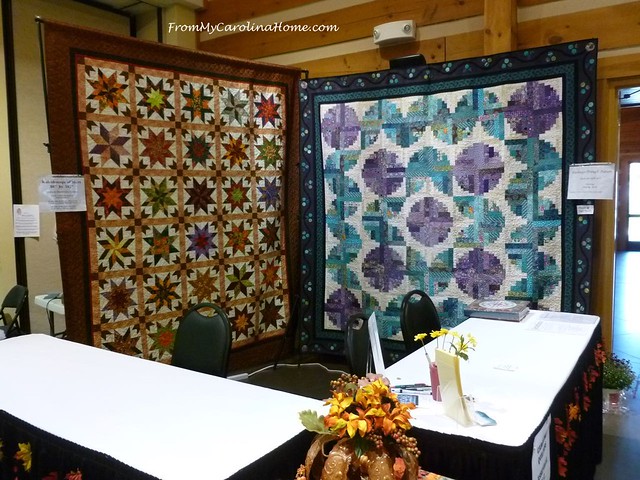 The booth also had two featherweight machines, and we would let kids make a simple four patch block from squares they selected. Mary Ann was in full heritage costume.  We had a fun shift together teaching the kids and talking to spectators about quilting. 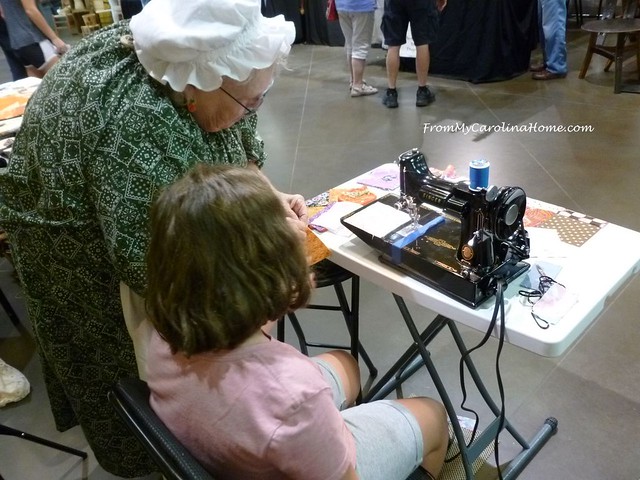 We had a great time during the fair!  We visited the animals, watched the crafters, saw a few shows while we were there on different days.  I’ll leave you with this sweetie, just 8 hours old and hadn’t yet attempted to stand. She was observing her new world in the Mooternity Ward. 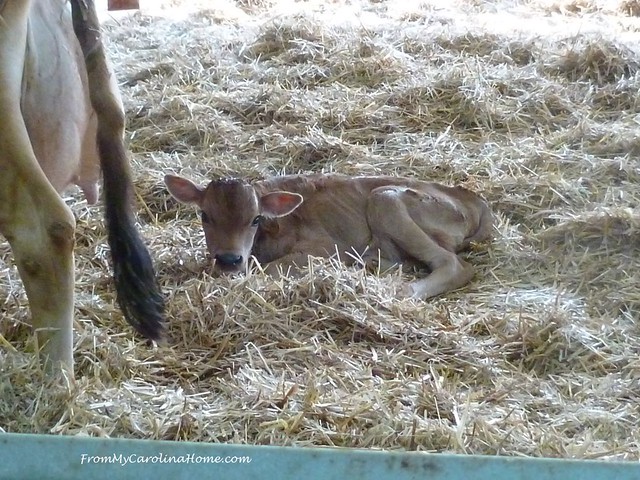 Do you enjoy your local fair?

27 thoughts on “Fun at the NC Mountain State Fair”