Next to the palace, Kensington Gardens encompasses a large parcel of land.  There is a small formal garden next to the palace, but the bulk of the 270 acres of land is given to a large grassy meadow lined with trees on either side of a wide concrete walkway.  This is devoted to public use, for residents of London to enjoy sunshine and fresh air.  Once a part of Hyde Park (which is still 350 acres itself), located right next to Kensington Gardens, the total amount of green space is impressive.  These two parks are part of a chain of royal parks stretching from Kensington Palace to Buckingham Palace. 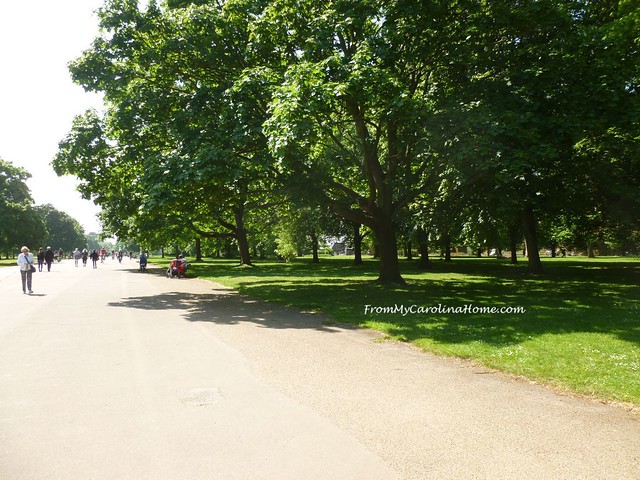 I was expecting something like an arboretum, but this wasn’t the case.  There were several wildflower sections wrapped with ironwork fencing on the edges where we came in from Queensway subway station on the walk to the palace. 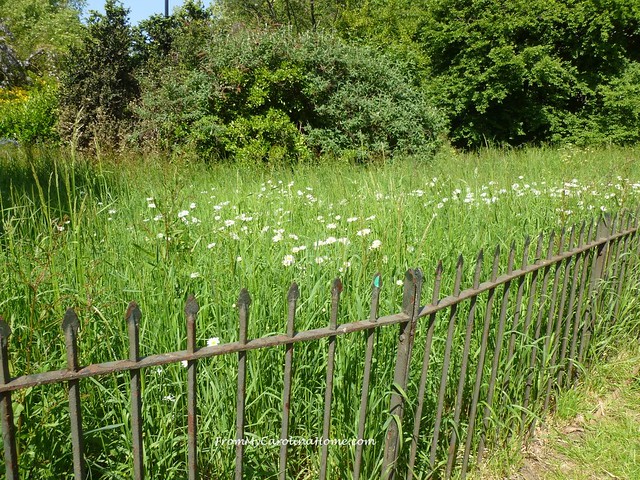 These spots were wild and overgrown, still with some lovely flowers. 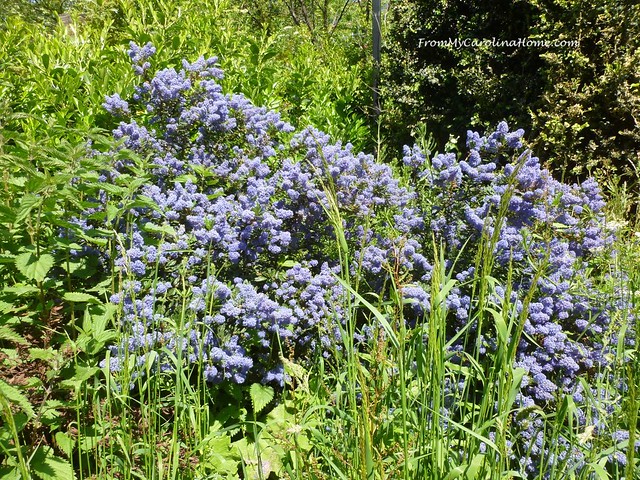 A sweet scent filled the air around these wisteria. 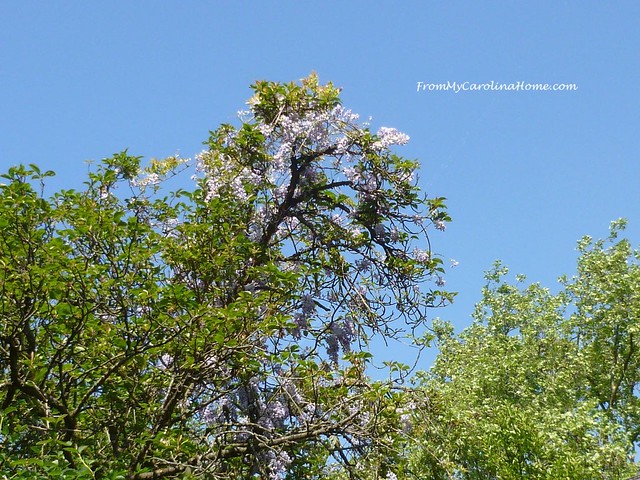 In front of the palace is a large green space with a pond.  There were literally hundreds of people in the park on this weekend day, running, walking and enjoying the sunshine with picnics and blankets, sunbathing and reading. 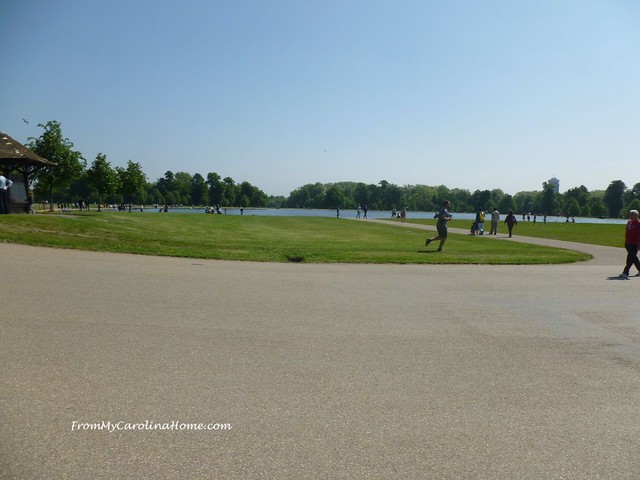 The sculpture of Queen Victoria is in front of the palace, looking out over the pond.  Queen Victoria’s daughter Louise, who was a sculptor herself, designed the statue. It was presented in 1893 to celebrate Victoria’s Golden Jubilee. 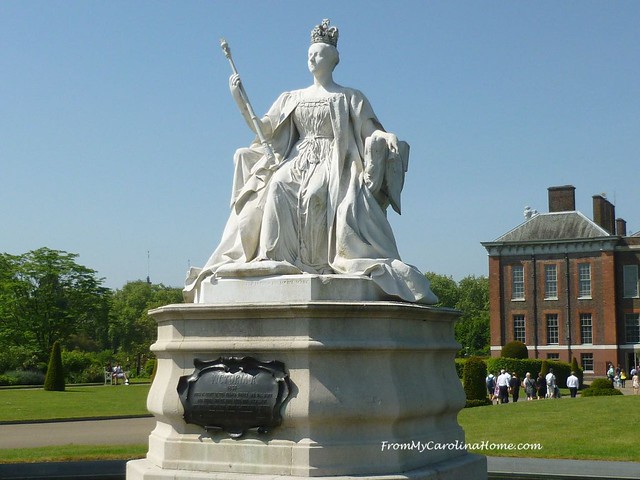 This formal geometric garden is part of the Orangery, a greenhouse and terrace built by Queen Anne in 1704.  Originally, orangeries were build as massive greenhouses to grow fruit trees for the very wealthy.  Queen Anne used hers as a greenhouse, but also a space to hold teas and evening entertainments.  Her story is a sad one.   She ascended to the throne after William and Mary, with William’s death in 1702.  Anne was Mary’s sister.  She was not a well woman, and despite 17 pregnancies died without a surviving heir.  She survived smallpox, but two of her daughters died of it.  Of her other three children to survive birth, two died in infancy, and the last died at age 11.  She was succeeded on the throne by her cousin, George I.  Today, the Orangery at Kensington houses a cafe and is closed for renovations, but the garden is still available to view. 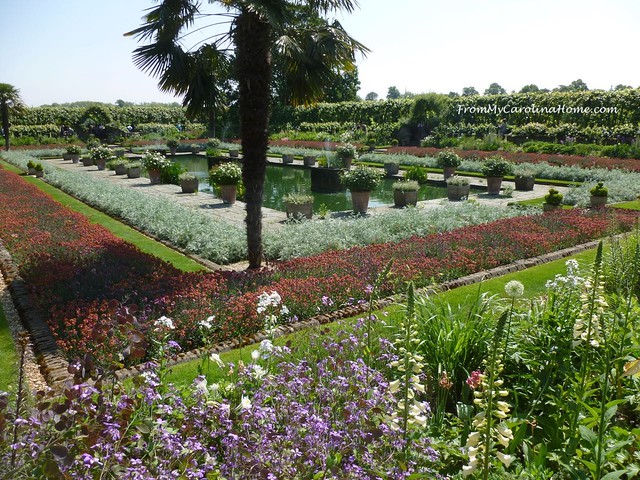 The center pool is a large rectangle, surrounded by bands of plantings with foliage in interesting colors and flowers along the edge.  Visitors walk around the garden on an upper level, with viewing alcoves between the green hedges, seen here on the upper left corner. 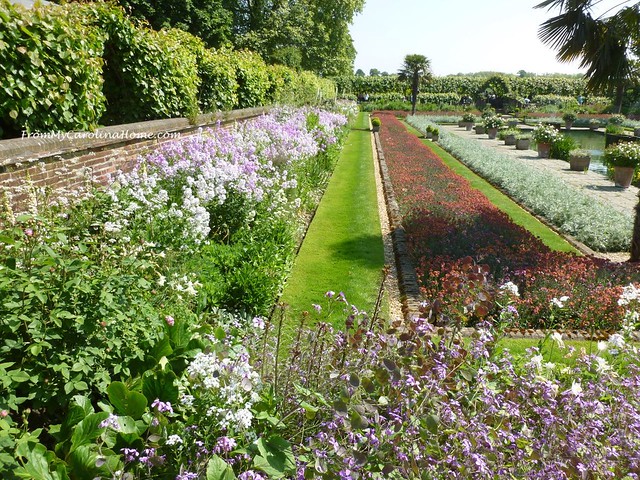 A variety of white and pale purple flowers edge the garden. 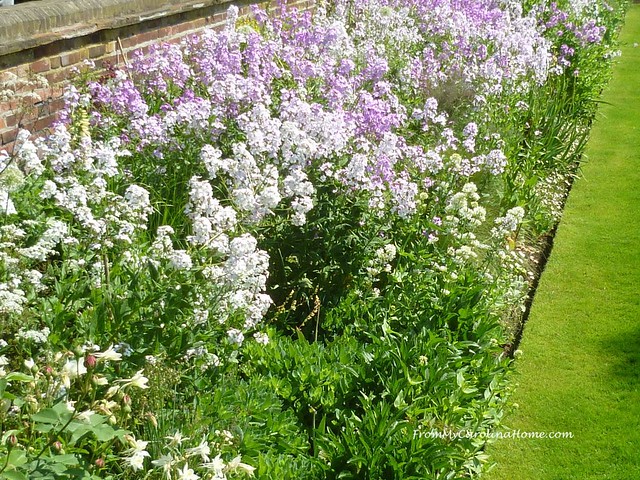 These snowball flowers are white allium, a variety of flowering onion.   The white flowers behind it look like viburnum. 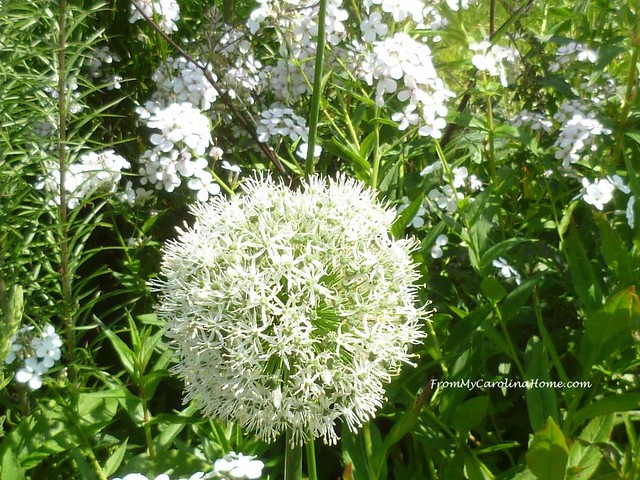 Large pots hold plantings of flowers with the same one in all the round pots and a different one in the smaller square ones. 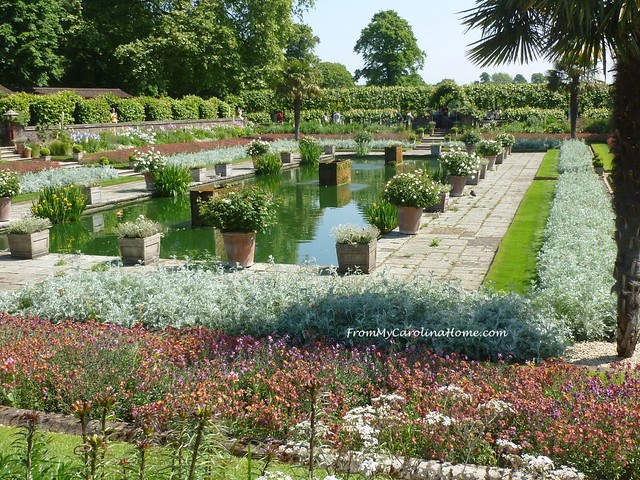 I think this silvery foliage is Dusty Miller.  I’m not sure what the red flowers are.  You can see yellow daffodils in the water. 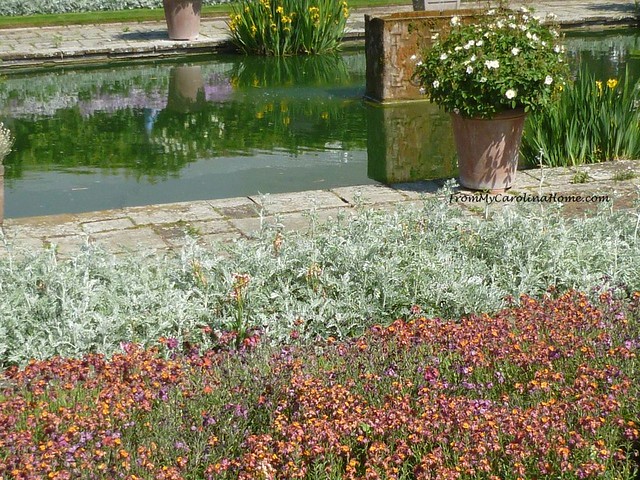 A portion of the Orangery can be seen in this photo, along with the walkway alcoves between the hedges.  There is an arch visible here, but it was roped off to keep people out of the garden itself. 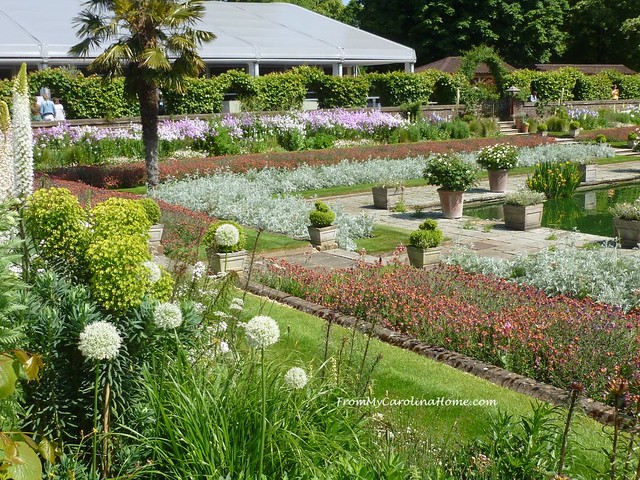 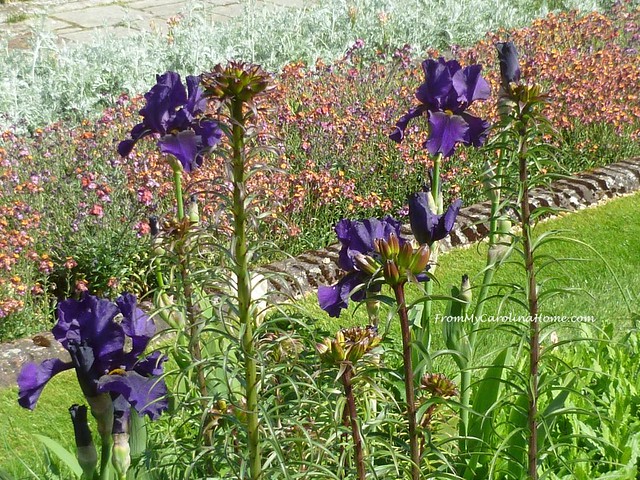 It was just too far to walk to the other attractions on the property of memorials to Prince Albert and Princess Diana, the Italian Garden, sculptures and Serpentine Gallery.  It was also getting hot that day, so we went to our next destination. 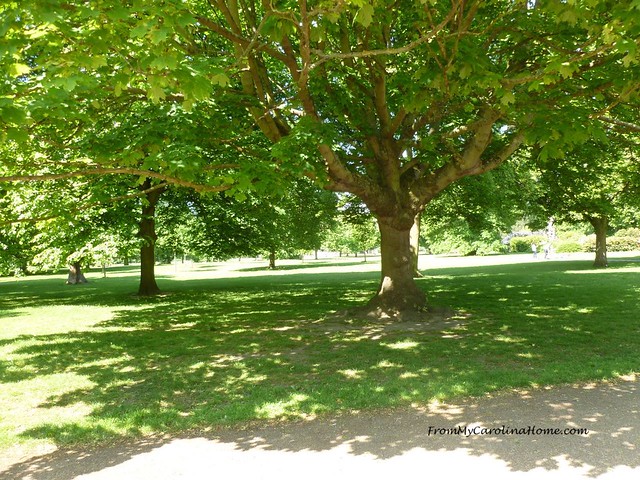 It is wonderful that such a large city has dedicated green space for local residents and visitors to enjoy.  It is something sorely lacking in many of our cities in the US.  Our small town has a greenway called the Oklawaha, and we frequently use it for walking during the mild days of spring and fall.  Are there parks and green spaces in your city?

PS – Amazon has some Great Ideas for Father’s Day!