The votes are in, and the number one pick to share from our England trip was Kensington Palace and Gardens.  So, today we return to London for a tour.  Today we’ll see the palace and some spectacular jewels, and I’ll show you the garden tomorrow.  Kinsington Palace is quite unassuming compared to other historic buildings in London.  It began as a residence, and was expanded when William and Mary decided to use it as a country home.  They wanted to get away from the trials of living in the city of London proper, and hired St. Paul architect Christopher Wren to design a larger home.  But Queen Mary decided to take control of the project, and implemented her own ideas.  They moved into the upgraded home in 1689, taking less than a year to finish Queen Mary’s plans. 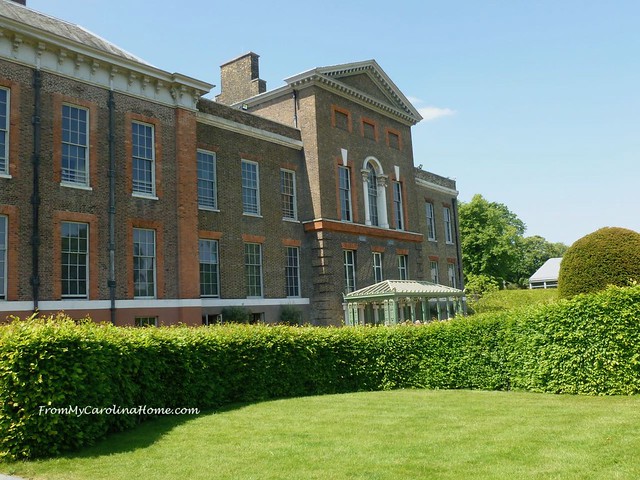 The sumptuous red walls with the gorgeous woodwork made this long room with tall windows awe inspiring.  There were exhibits of the clothing worn at the time. 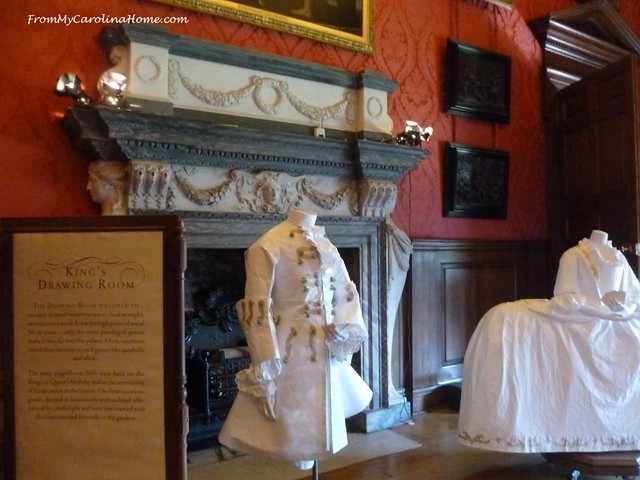 For a three year period, the King and Queen held magnificent balls with drinking and gambling until the wee hours. 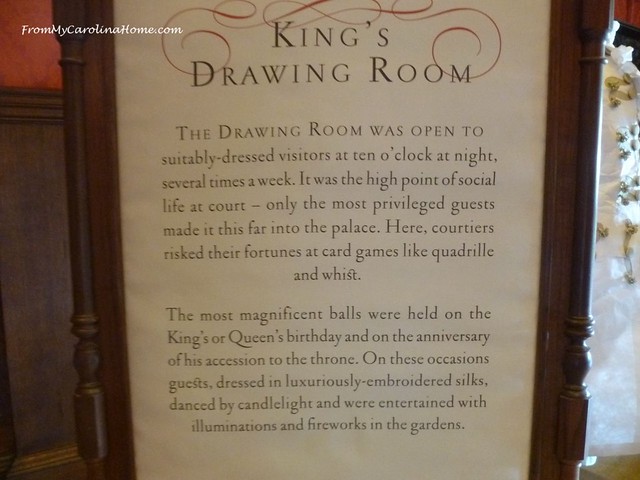 This gown, wide at the sides and not front to back, was called a mantua.  The wide skirt was designed to show off yards of expensive fabrics often silk brocade with embroidery.  This one dates to 1750. 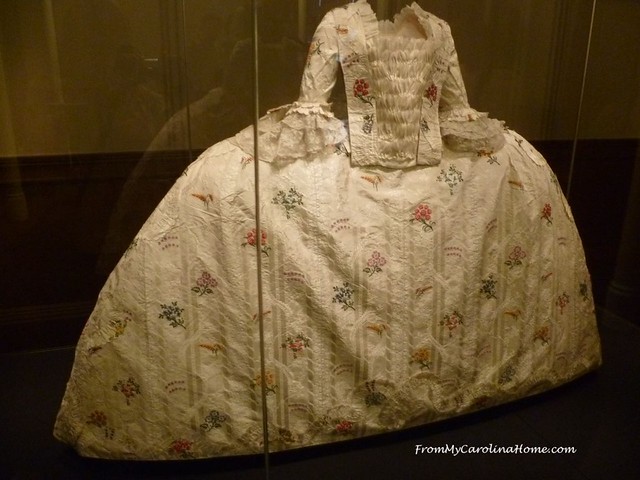 In the early 1700s, architect William Kent was engaged by King George I to enhance the palace with Georgian influence.  His work on the ceilings and the King’s staircase is his lasting legacy.  They are intricately painted with full size renderings of court nobles and spectacular trompe l’oeil. 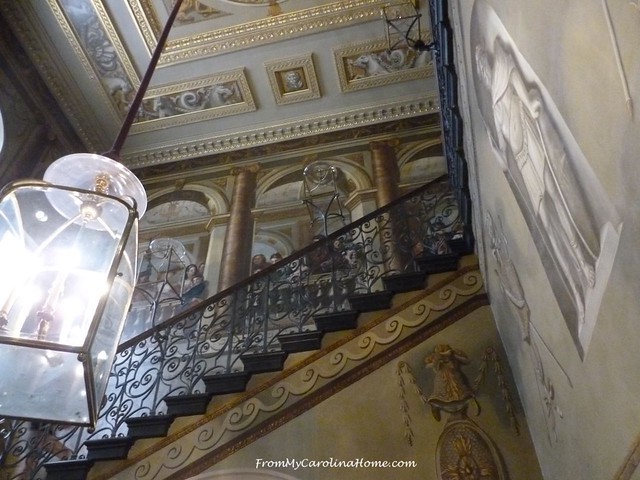 Amazing, and the original work survives to today.  It is from the top of this staircase that Victoria first met her future husband Albert. 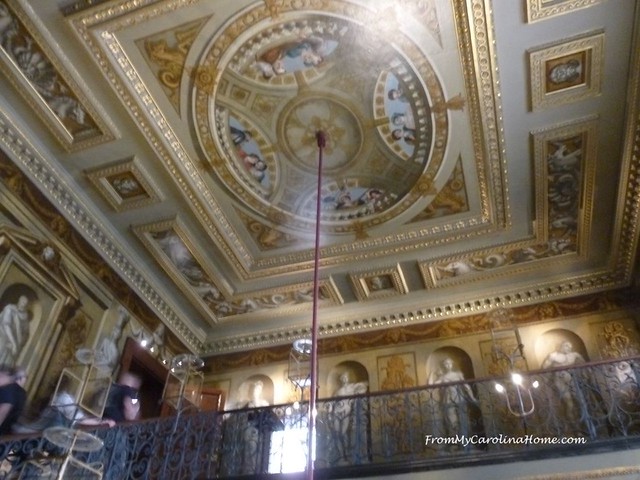 This is the Cuppola room, designed by William Kent for George I, with a large piece in the center, an 18th-century musical clock called the ‘Temple of the Four Great Monarchies of the World’.   Each side has a different scene. 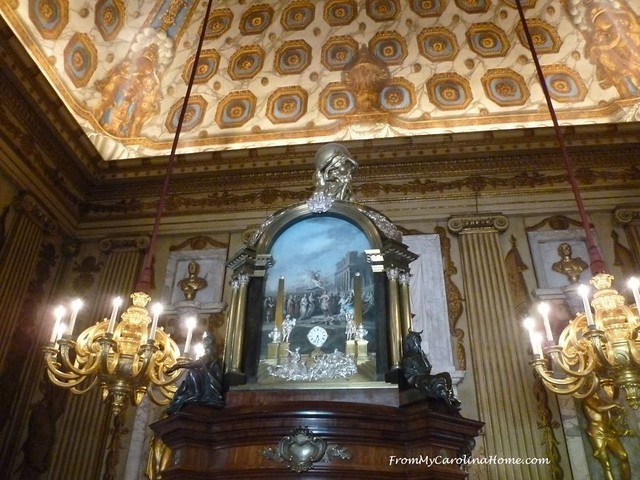 The living areas for Victoria as a girl were the Queen’s Apartments originally occupied by Queen Mary, and featured ornate woodwork along with many paintings and an extensive collection of porcelains. 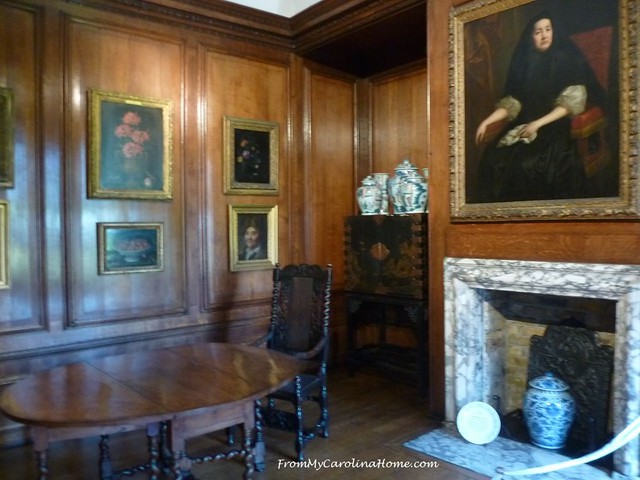 Magnificent tapestries with trompe l’oeil weaves are still on display. 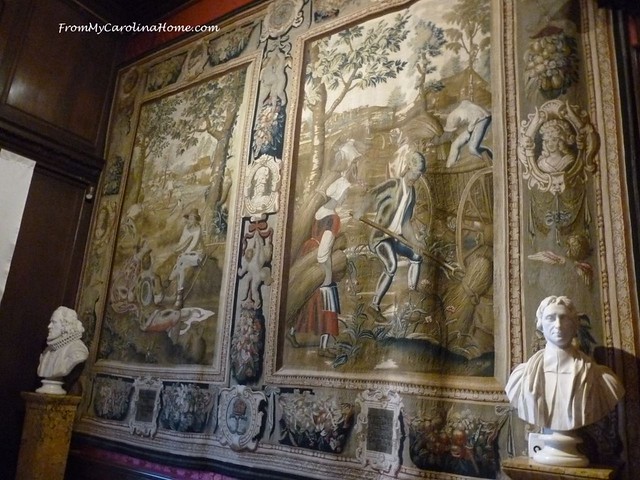 The bedroom with ornate bed curtains. 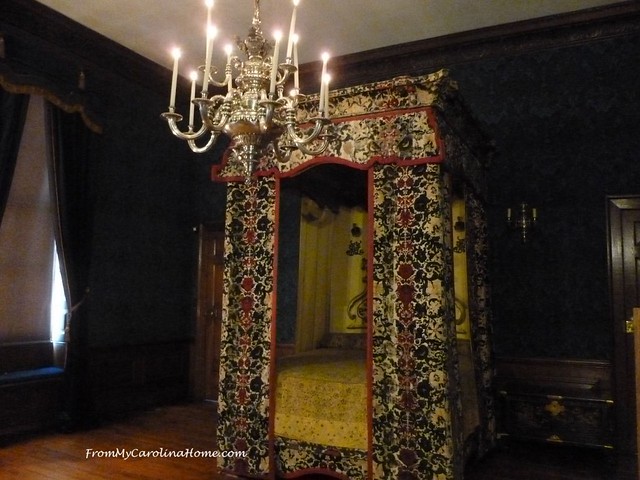 One of Victorias gowns was on display in another room, showing just how little she was in her youth.  She was short, and tiny when she ascended to the throne at age 18 in 1837. 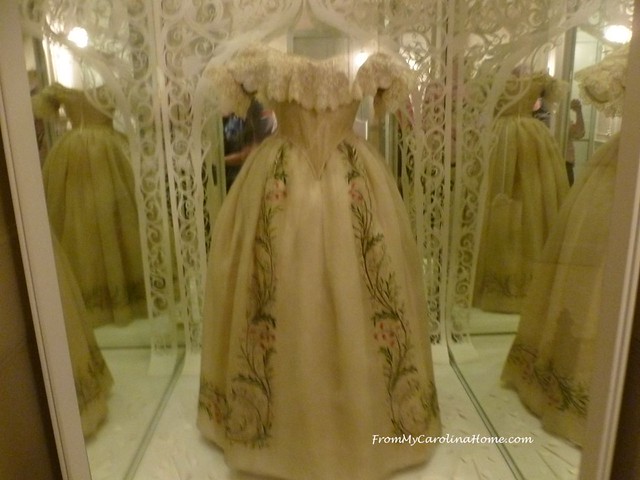 A few of the monarchy’s jewels are displayed here.  This set of emeralds was just stunning, with the huge size of the stones.  Looking closely, you can see some of the imperfections in the stones, attesting to their genuine character. 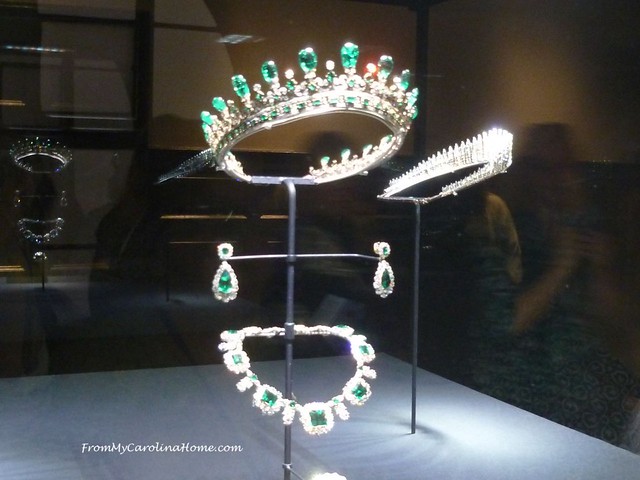 A tiara, earrings, necklace and a ring complete the matched set.  The brightest and clearest stones in the center of the necklace, center front of the tiara and the ring. 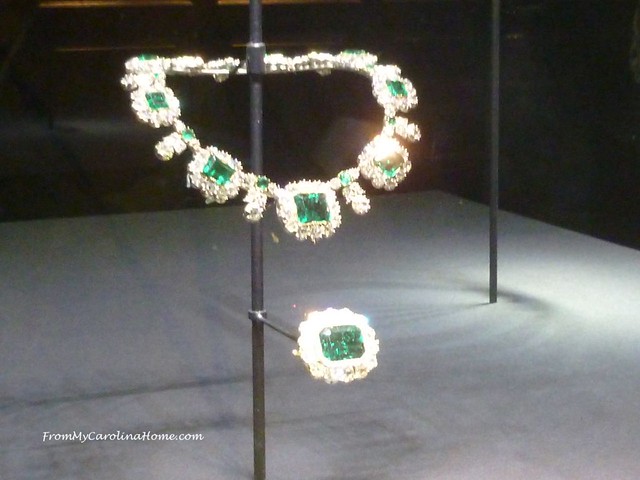 A nearby placard talks about the history of the set, designed by Prince Albert. 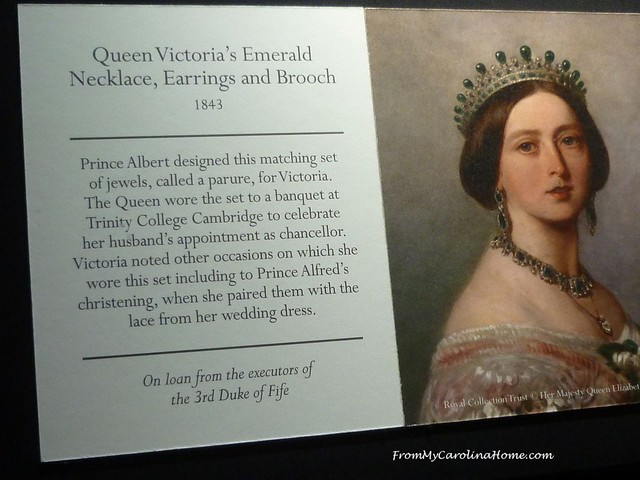 Another fabulous tiara is on display, made for Queen Victoria’s daughter Louise. 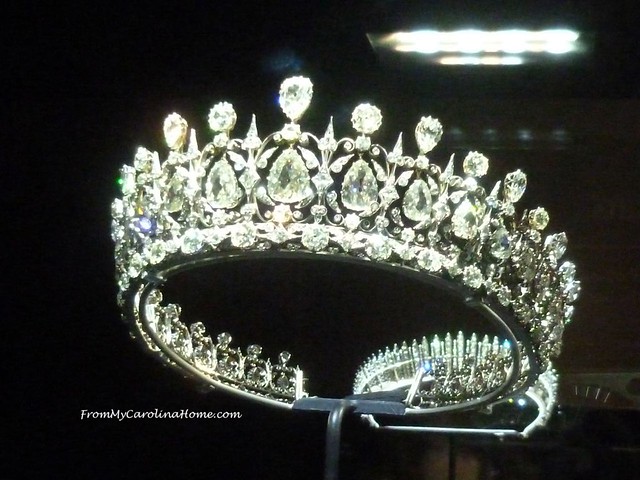 Called the Fife Diamond Tiara, a nearby placard gives some of its history. 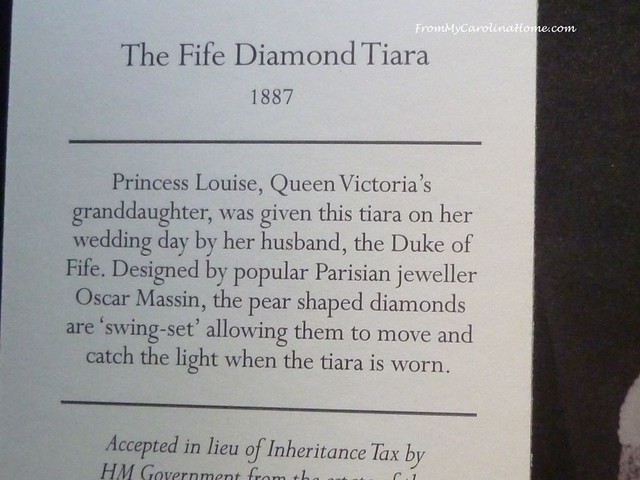 The desk Queen Victoria used for daily duties of state, with some of the red boxes which would have contained official documents is displayed. 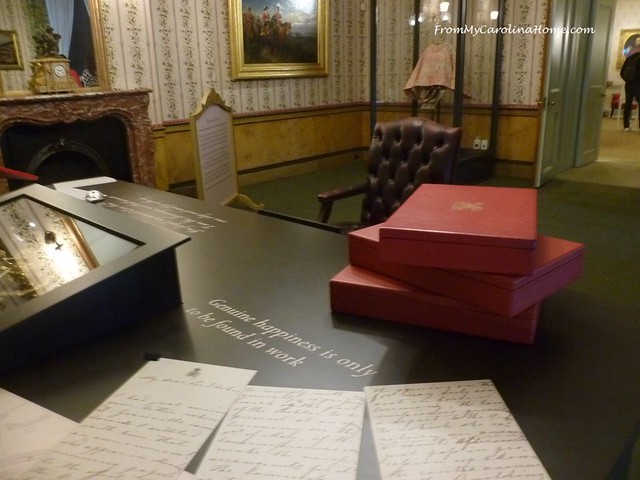 This is the room and table where Queen Victoria held her first Privy Council the day she became Queen.  Shortly after, she moved to Buckingham Palace. 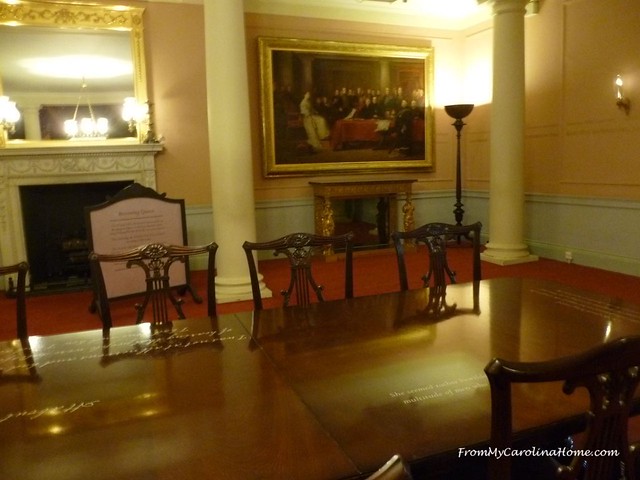 You can read more history and interesting details by clicking on Kensington Palace.  There was so much to see, so much detail to absorb, it was almost overwhelming.  The history was so interesting.  Only a small portion of the palace, the State Apartments and a few galleries, is open to visitors.  The other side of the building are apartments still in use today.  Charles and Diana raised their children there.  The Duke and Duchess of Cambridge (William and Kate) and their children live there today.  Harry and Megan, the Duke and Duchess of Sussex now live there too.  The term apartment is used loosely, though, as the humbly named Apartment 1 is a home with 21 rooms.  According to a London magazine, there are more than 50 residents of the palace estate, including other royals, military personnel, staff, and ordinary people willing to pay the high rent.  The Queen’s cousin was estimated to pay £10,000 a month in rent for one of the smaller apartments with only 10 rooms in 2009.  Did you enjoy the tour?  Have you ever been to Kensington Palace?