The garden is winding down, and the hurricane has helped to move things along.  A few critters did their share too. DH modified the bird feeder so that less seed would spill into the tray, which made it a bit more difficult for the larger birds like the cardinals to eat. So, feeling sorry for them, he purchased a second feeder, and mounted it below the first one.  The little birds like the goldfinches began using the new one pretty quickly. The cardinals continued to go to the big one. 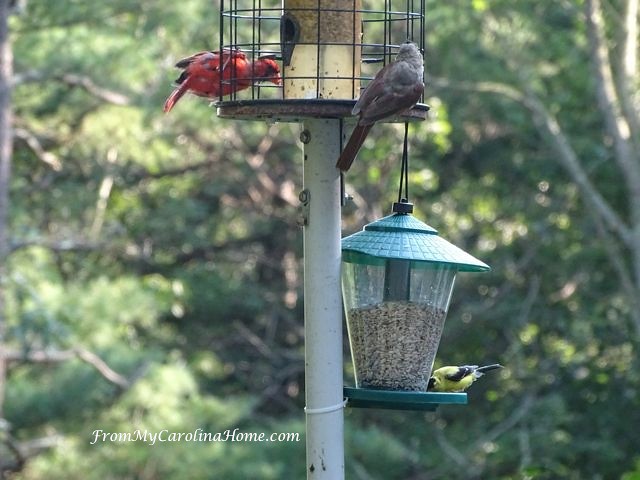 Then later, success, they figured it out.  He later added a larger perch to this one to make it easier for them to land. 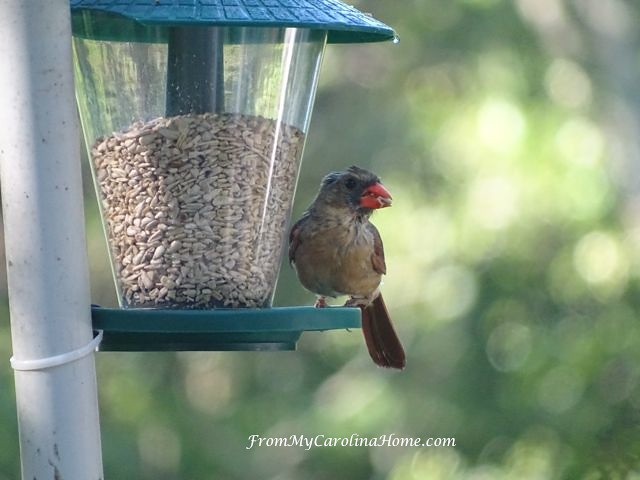 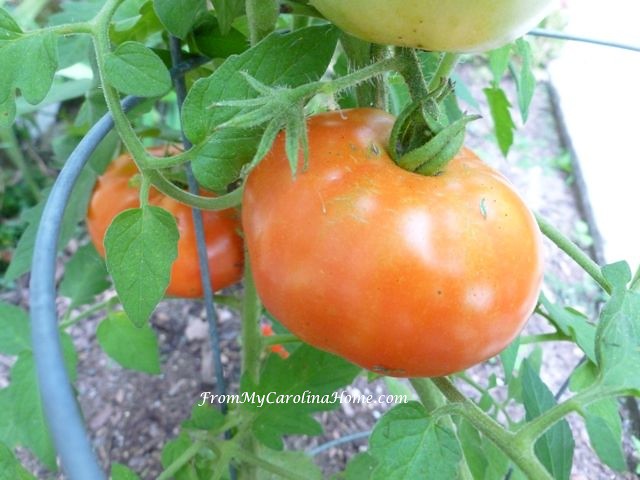 Another Cherokee Purple is getting close to ripe. 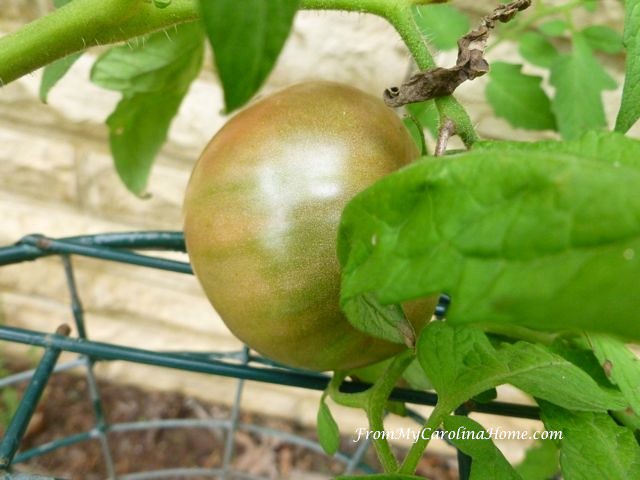 Caprese salad was even more delicious with Cherokee Purple tomatoes and fresh basil from my own garden. 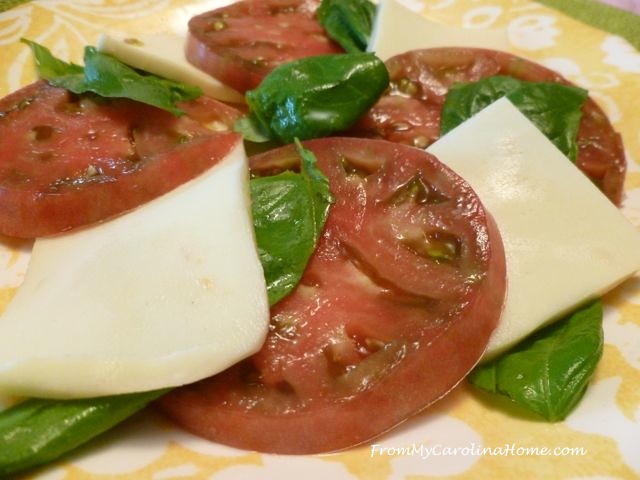 There are still more tomatoes yet to come. 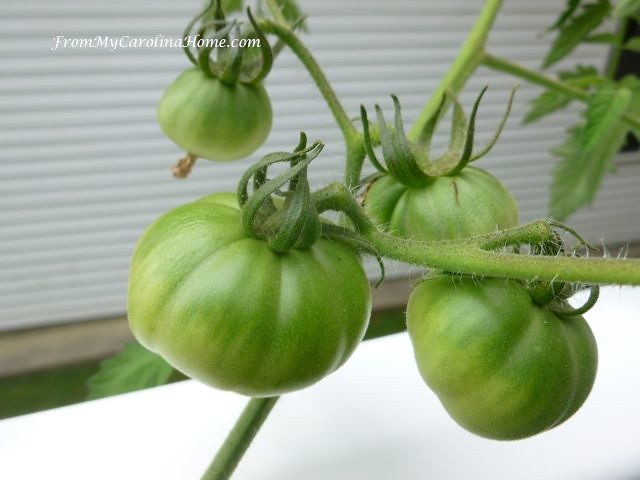 Some of the larger tomatoes were harvested before the hurricane so they wouldn’t be lost. These are now sitting on my kitchen windowsill to ripen. Well, OK, I ate the red one. 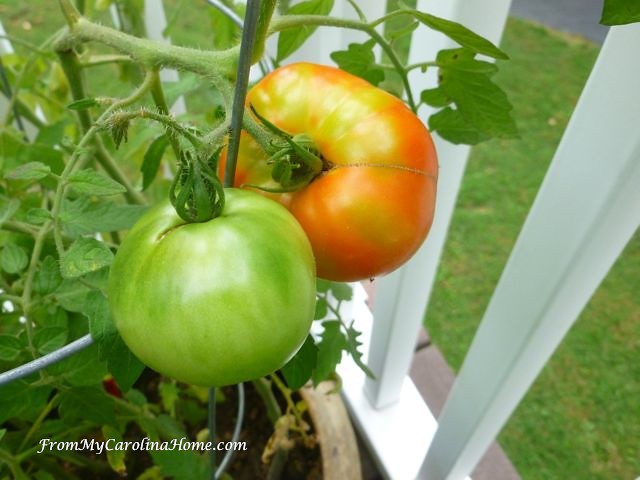 A few of the potted plants are giving me a fall show, like this red one. 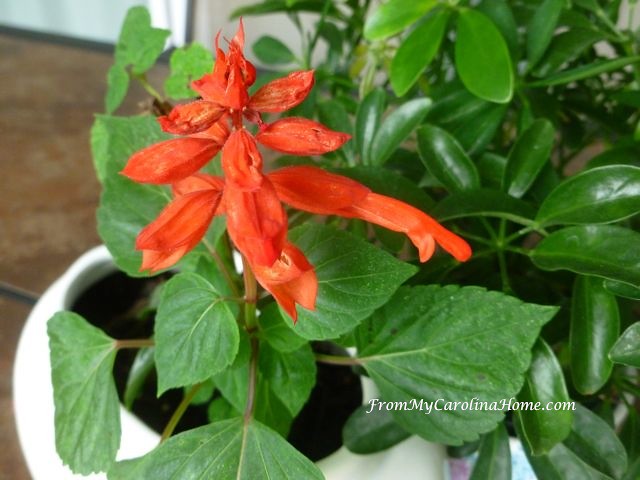 A few more calibrachoa, these were blooming right up to this week, before the rain and wind came. 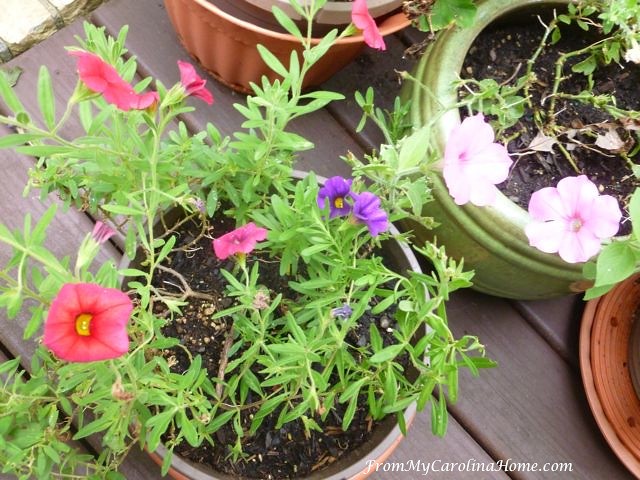 A flock of female turkeys visited last weekend. I stepped outside carefully and began talking to them, and tossing bits of bread to them. They weren’t real interested in the bread, but they didn’t run away when they saw me. So, progress with my turkey pets, LOL!! 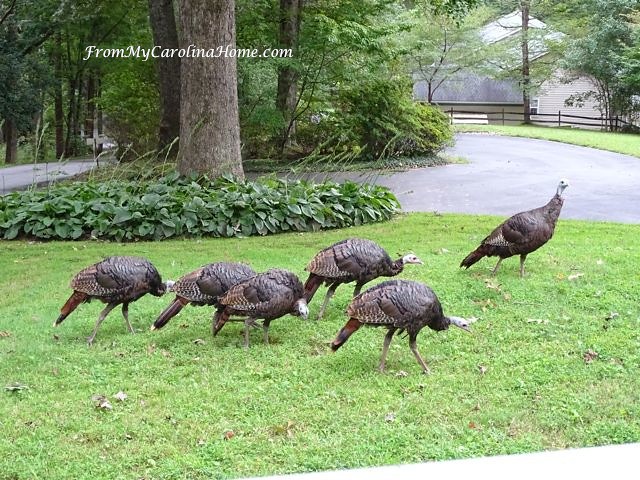 A couple of them did finally eat the offered bread. Then, of course, the others wanted the same bite, LOL! 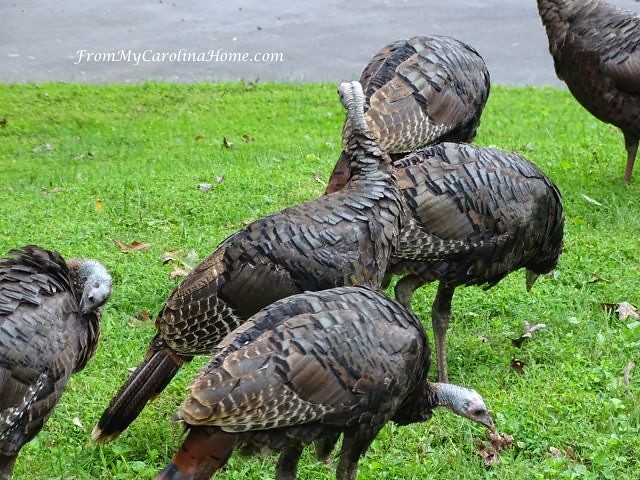 There was this skink sunning himself some days ago, I haven’t seen them since it began raining. 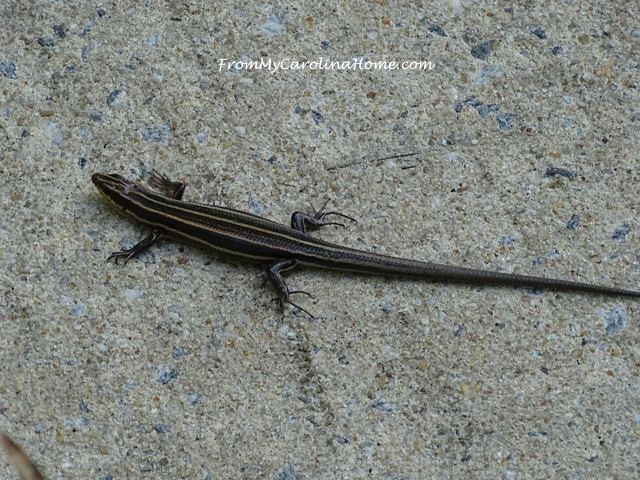 More tomatoes harvested all at once became my first attempt at tomato pie.  I wasn’t happy with the result, the crust came out soggy and there wasn’t enough creaminess in the filling.  So, I’ll keep trying until I get it the way I want it. 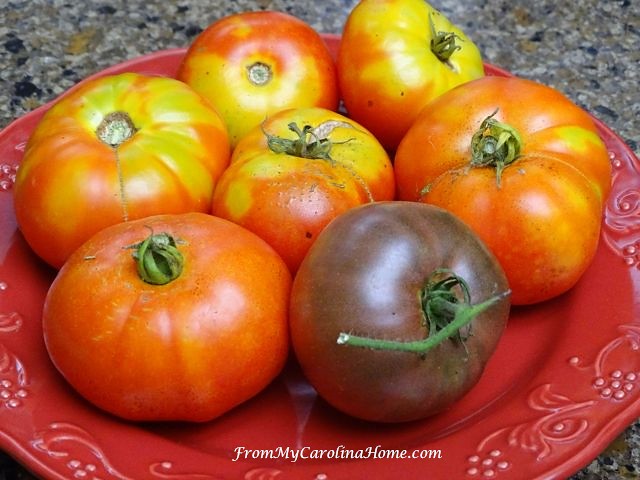 OK, I ate one of these too before it made it into the pie. It was too tempting on a bed of fresh spinach. 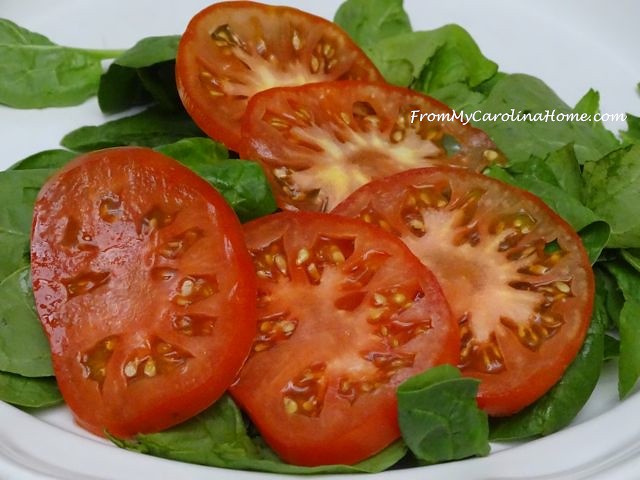 I found this sweet cutie pie in the garden a couple of weeks ago. 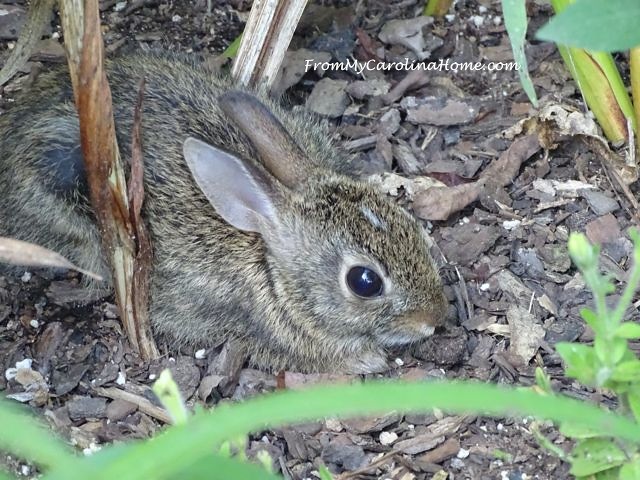 Then the next day my petunias were nibbled down to the nubs. Oh well, at least he didn’t eat my tomato or basil plants. I just want to pick him up and cuddle him, but I don’t think he would like it. 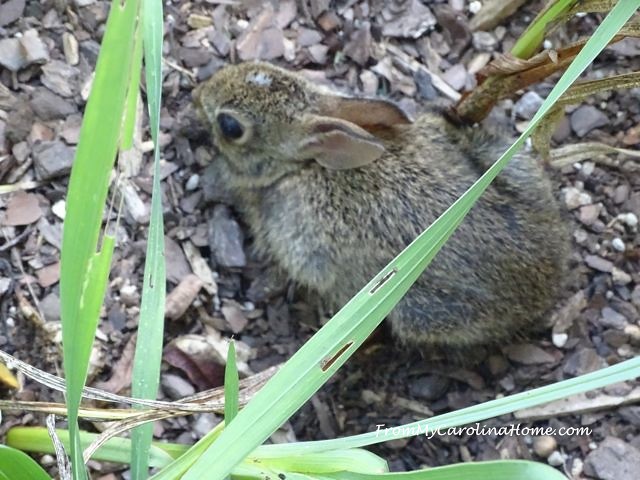 Just this past weekend, I finally was able to have the camera in hand when the hummingbird came by for a visit to the still blooming torenias. 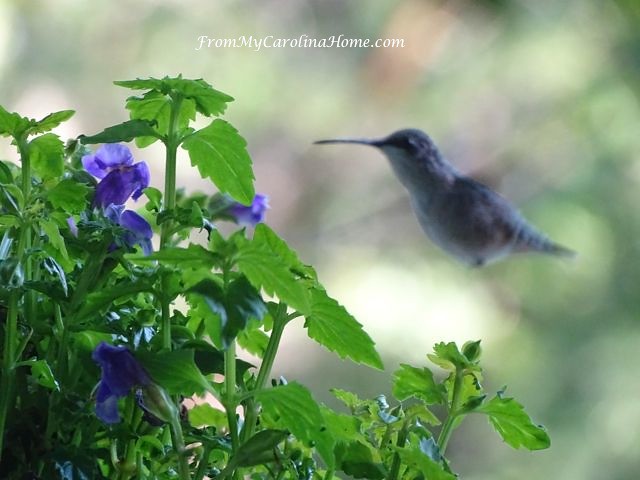 The torenias are almost done, some parts are starting to die off, but the tops are still blooming. This hummingbird stayed quite a while, visiting all four hanging baskets for all the nectar available. 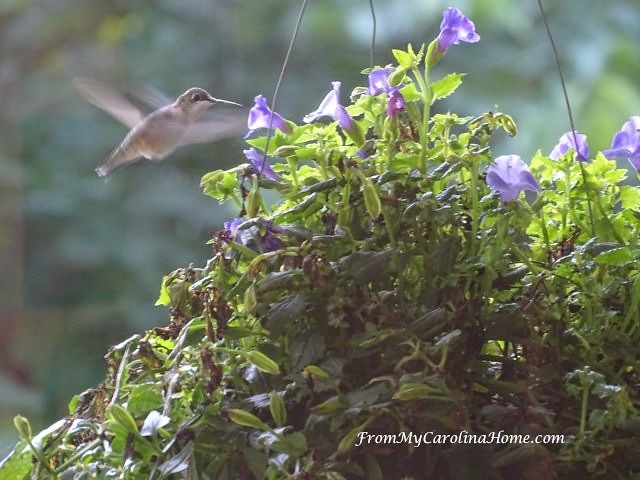 Irma’s winds reached a peak on Monday night, really howling through the coves and woke me up. Luckily, there wasn’t any real damage to the flowers on the veranda.  The begonias must love the cooler temperatures, as all of them are blooming more than ever. 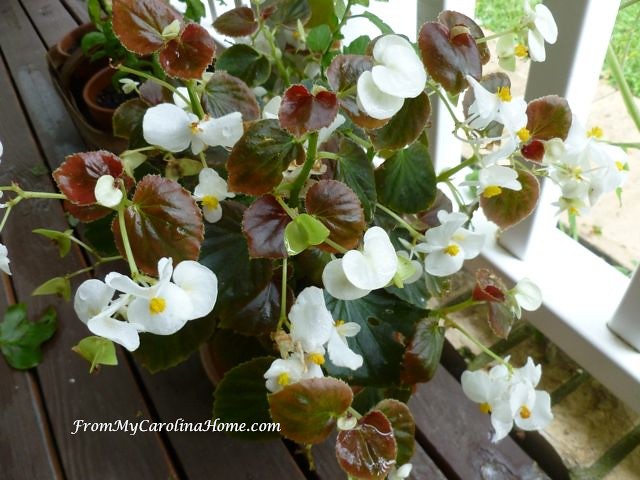 Even the pink ones, although this isn’t really a fall color.  Still, the blooms are welcome. 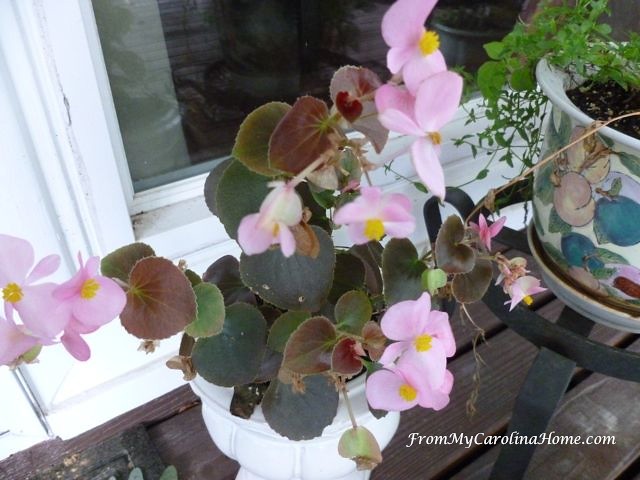 The yellow torenias are also putting on a show for the cooler weather, and seem to be just a vigorous as before, unlike their purple cousins in the hanging baskets. 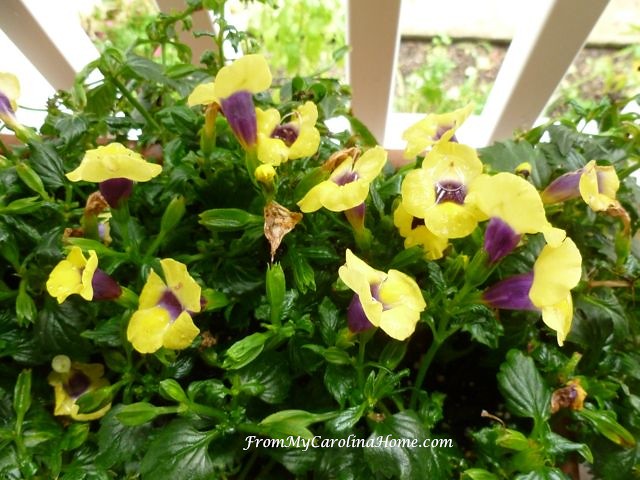 My parsley and yellow calabrachoa were beat down by the wind and rain, but I expect them to recover shortly. 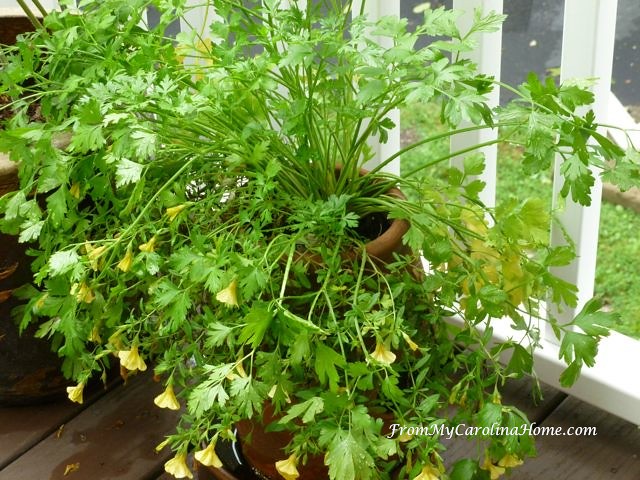 I put the Thanksgiving cactus out on the veranda over the summer so it could get more sunlight.  It seems to be perking up well now, maybe it likes cooler weather too.  I’ll bring it inside in about a month, and it should bloom in November. 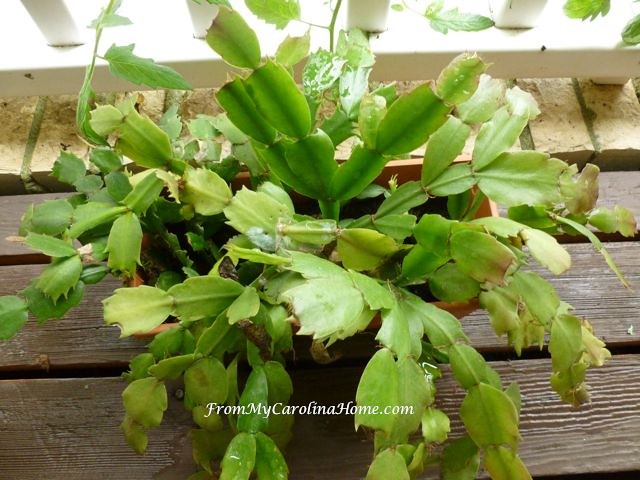 One more flower to show you. DH went to the store for me, and came home with a beautiful bouquet of white roses, one of my favorite cut flowers. Gorgeous aren’t they? Their fragrance is so sweet.  He’s a keeper. 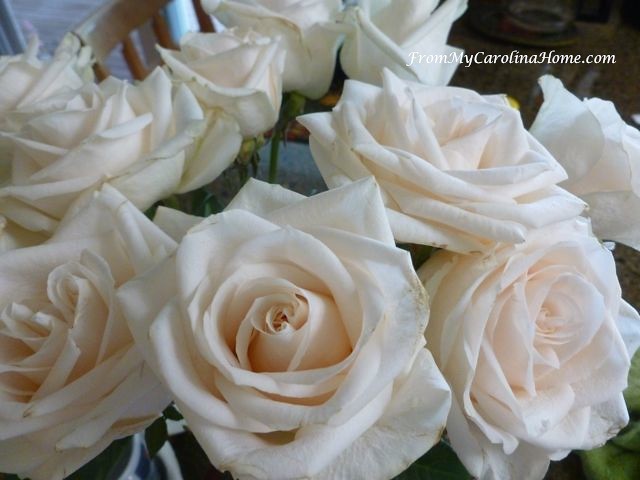 Volunteer day at the book sale was last week, and I did pretty well.  Note that large binder on the bottom left, that is a Master Gardener manual! Specific advice for North Carolina, also in another North Carolina Gardening Month by Month book (on top of the Cooks Country Best Lost Suppers book), will hopefully help my efforts to plant more native plants and more perennials for my area.  Cookbooks, novels, audio books, and a DVD of Gosford Park completed that day’s haul. 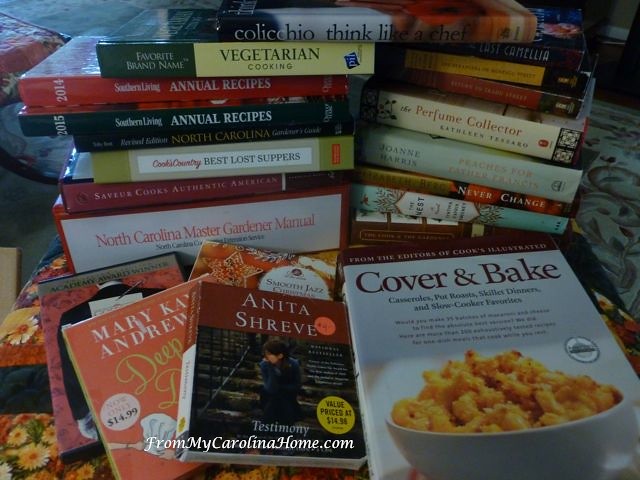 Last Friday, I worked the book sale, and of course came home with an additional score, books on hiking in our area, plus another gardening book for the Carolinas. We do plan to do more hiking in the fall and next spring.  I’ll be going through my cookbooks and other books to cull some out for the garage sale this weekend at my friends home.  If you are local, look for us on Dawnwood in the Haywood Knolls Neighborhood garage sale on Saturday only.  I’m taking dishes, quilting and cooking books, fabrics, notions, stamping sets and lots more. 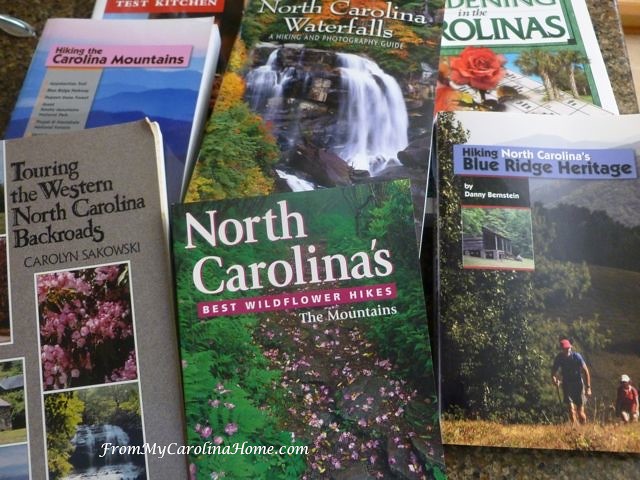 Hope you are doing OK after the hurricanes, both Harvey and Irma. We were lucky that the path turned west, and the storm weakened. The fair closed on Monday for the first time in many years as the winds were too high for safety. But it is open again, and the cooking competitions will go on this week as planned. More on that later. 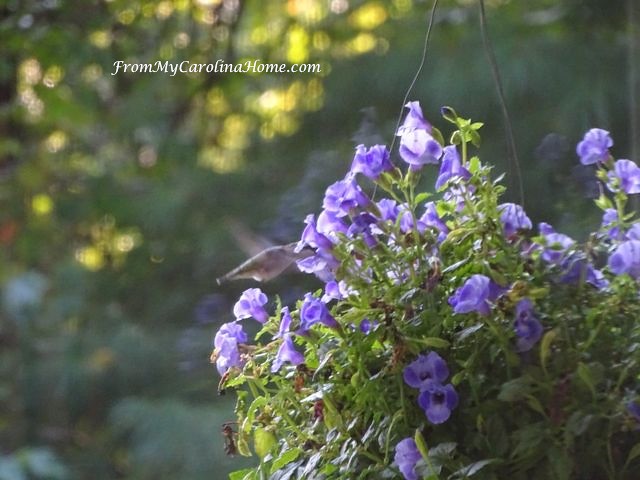 26 thoughts on “September in the Garden”