It must just be my year for bad borders.  I am not going to reveal where this particular quilt came from, I work with several charity quilter groups to do Quilts of Valor, and I do not want to embarrass anyone.  I am reasonably sure that this piecer doesn’t read my blog, and I want to show you all one more radical idea to take up a mess of a border.  The quilt is a tumbler style, which has a problem to begin with as the sides are often on the bias and more prone to stretching out of shape. A lovely wide dark blue backing was provided with the top. 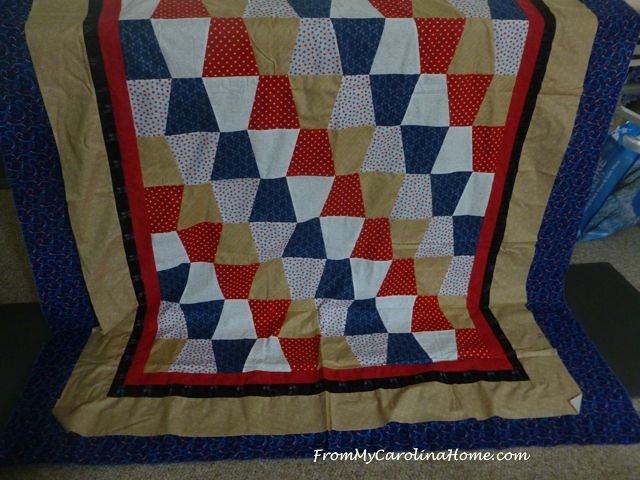 Just laying it out on the backing to check the size started to point to an issue with the border, actually three borders.  The blue here on the edge is the backing. 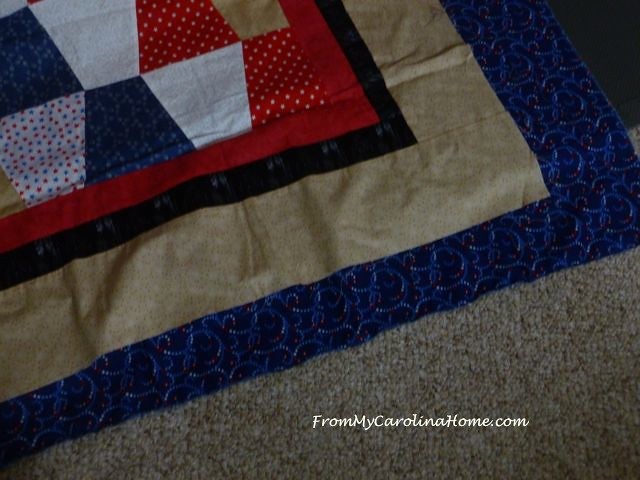 Sigh. I know you all are getting as tired of bad borders as I am, but this one took the cake. 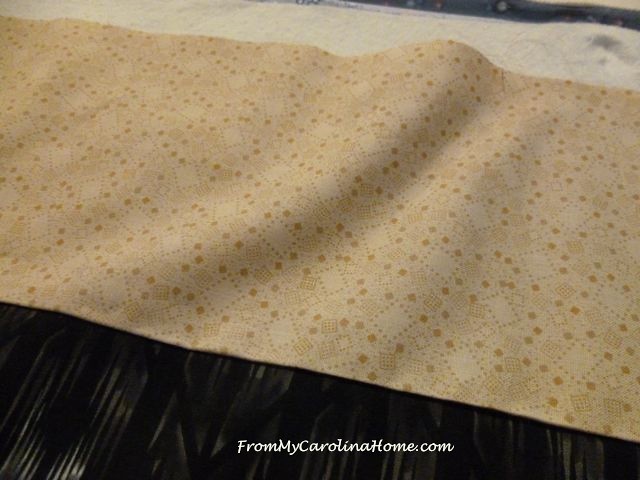 Once again, look at the extra fabric in this! But, it goes one step further. 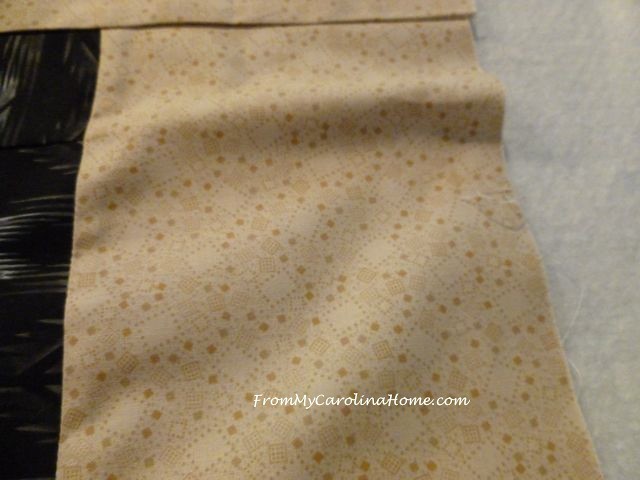 Here is the most graphic example I have ever seen where the outer edge was so obviously larger than the inner edge. The inner red border was this way. 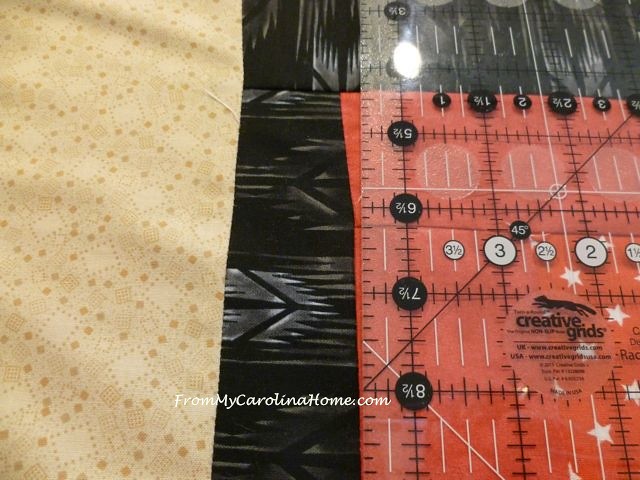 And the middle black border was also this way, adding fabric to the outer edge. 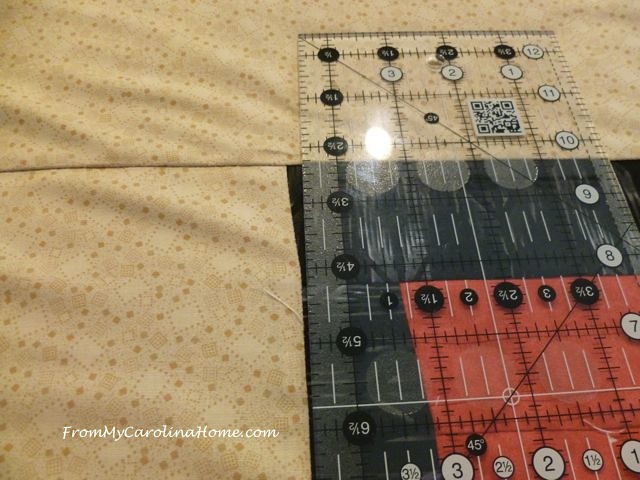 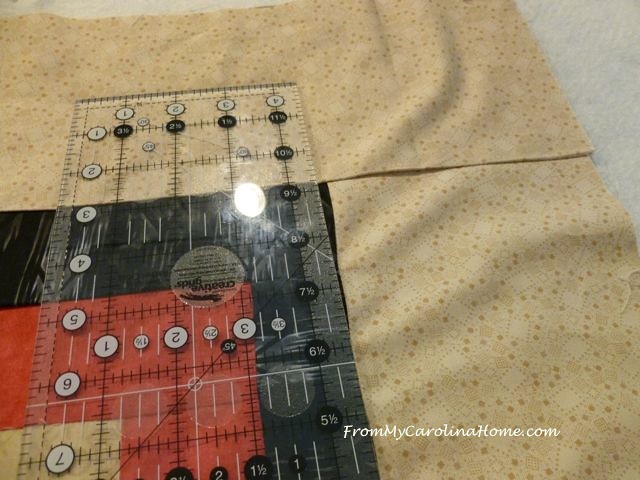 Which gave us this on the outer beige border. 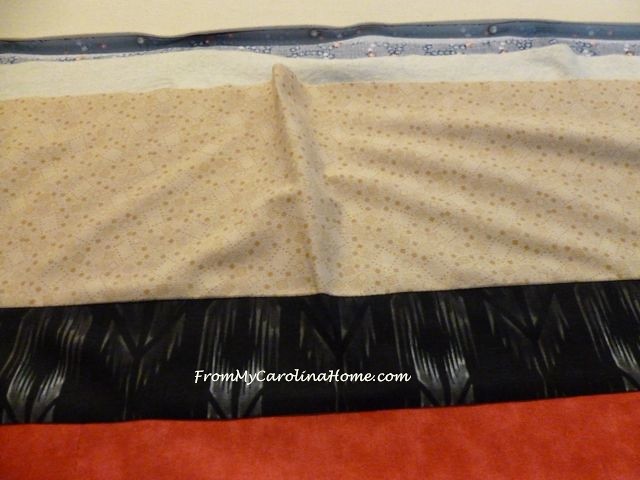 There was no way this was going to work in, or quilt out. So, I decided to do a radical thing, something I only considered because it was a charity quilt.  If someone had been paying for quilting, I would have let the quilter have it back to fix the borders.  I pulled it off the frame, laid it on the cutting table and marked darts in the borders on the back side. The darts went all the way through the three borders, decreasing to nothing at the inner sewn edge of the red border. The amount was determined by what was hanging over a straight line on my cutting board when I lined up the center section folded in half.   It doesn’t seem like much here, but it is almost an inch of fullness coming out at the outer edge. I marked the dart with a pencil line… 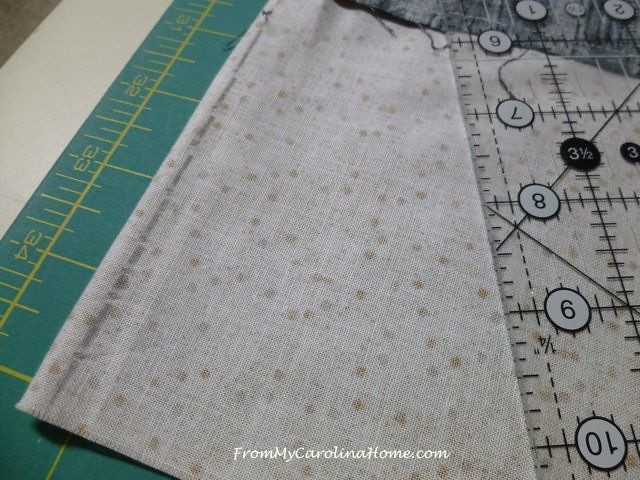 then took it to the sewing machine and sewed darts on all four sides. 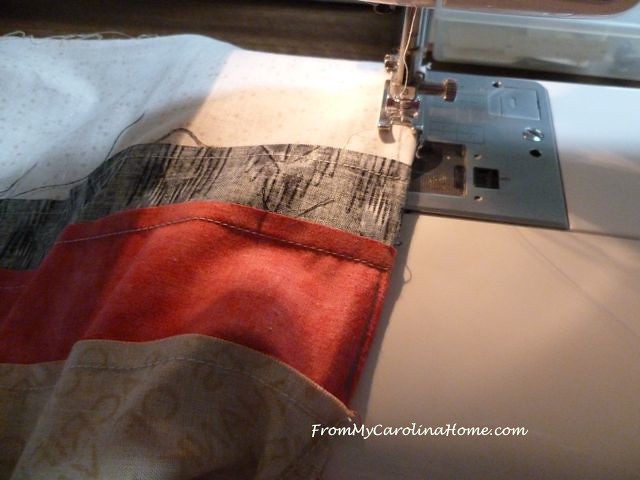 Then I took it back to the cutting table, and cut off the uneven edges with additional excess fabric. This will give me some room to push a bit on it at the corners to accommodate some of the remaining fullness, and stitch it straight. 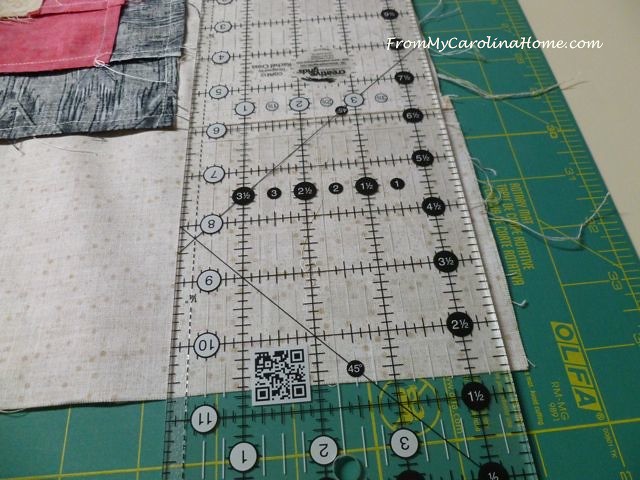 I pressed the darts to one side on the backside first, then on the right side to set in the seam. It worked nicely. 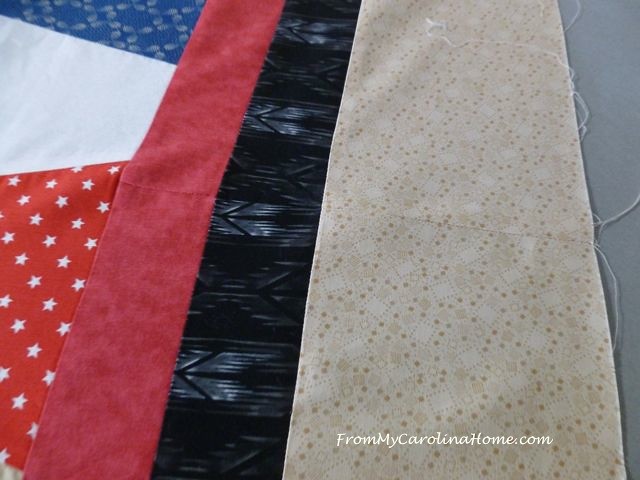 Here is one on the other side.  Now it lays flat. 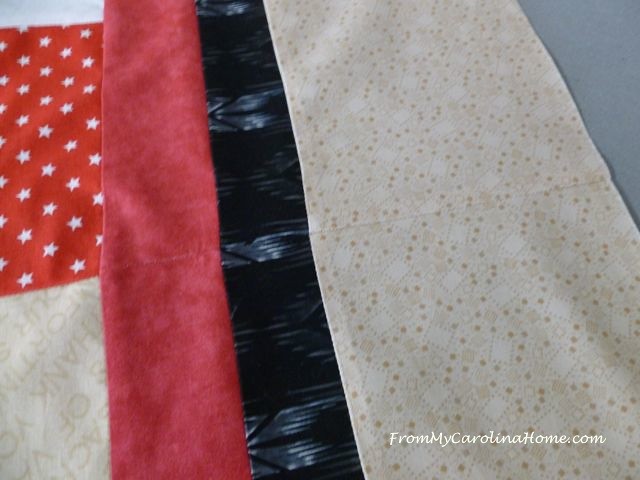 I loaded it back on the frame, and stitched the top edge down. Much better!  Even though you can still see the ruffle effect at the seam line between the beige and black borders. 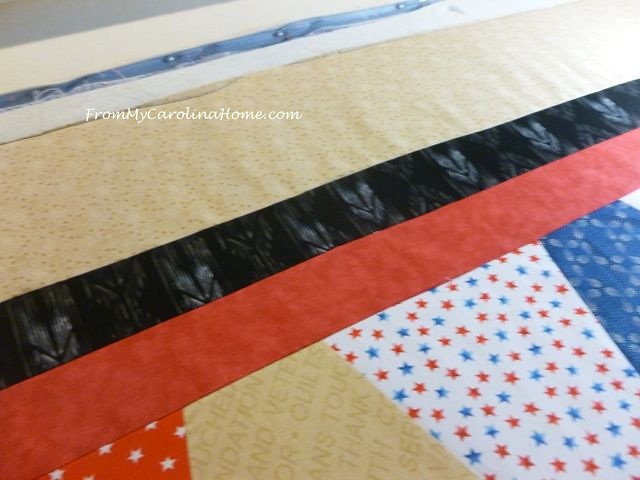 I thought that since I was doing more Quilts of Valor now, I should have a patriotic pantograph, so I got this one from Urban Elementz called Stars and Bars. It looked great on the website, but after using it, it isn’t going to be a favorite. It is too linear, doesn’t interlock and is a bit difficult to get the stars to close. 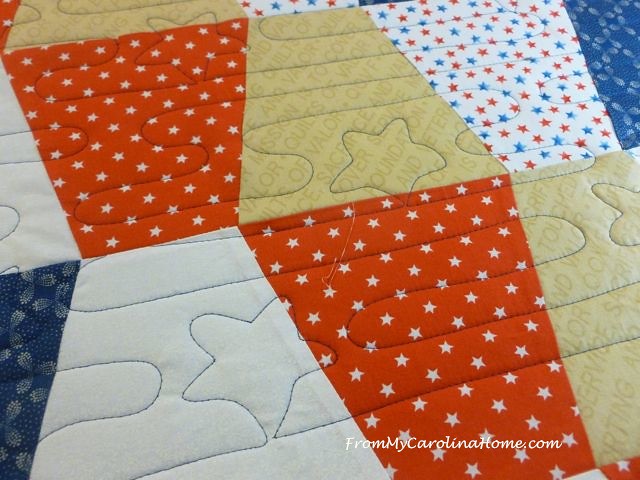 Later as I was quilting, I started doing the stars by crossing the point where it joins the stripe lines to ensure that the points closed. The panto has the stars corners rounded off, and I kept trying to make them more pointy. Consistency was a problem for me. 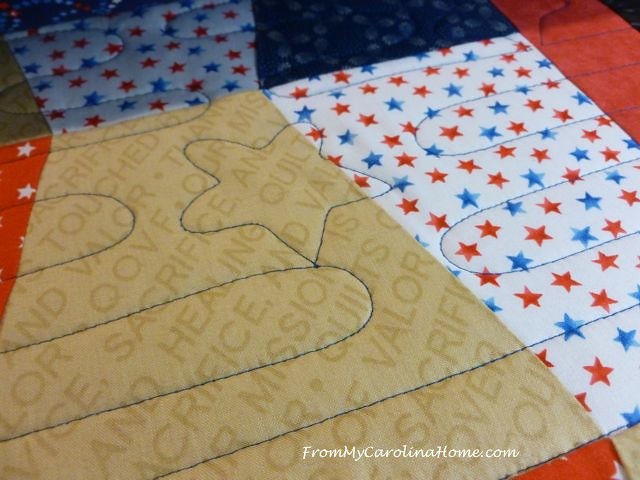 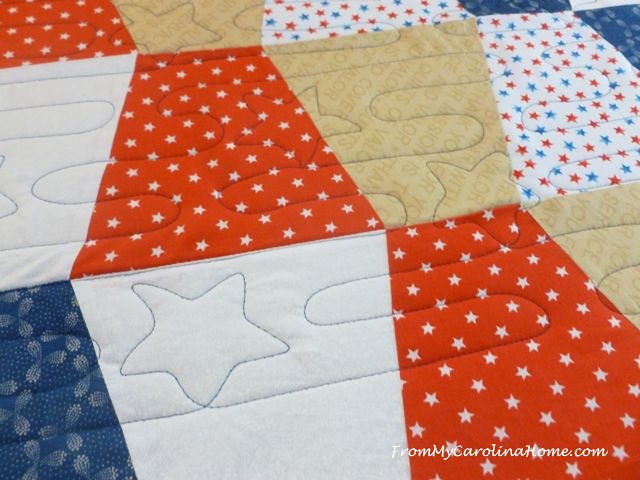 After the quilting was done, the darts are barely noticeable. 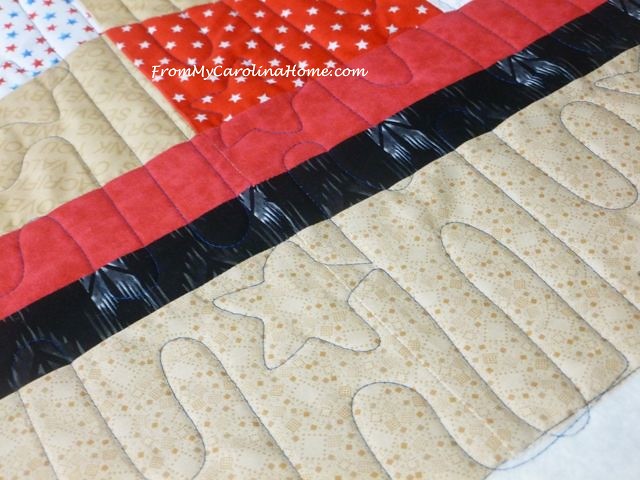 Looks pretty good all quilted up. 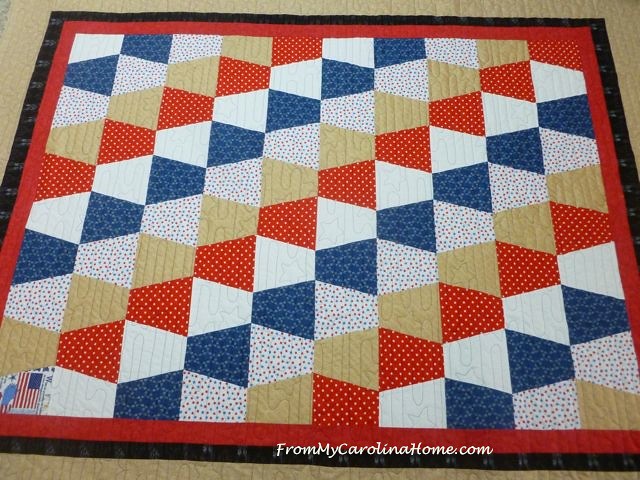 Even the borders are looking better. 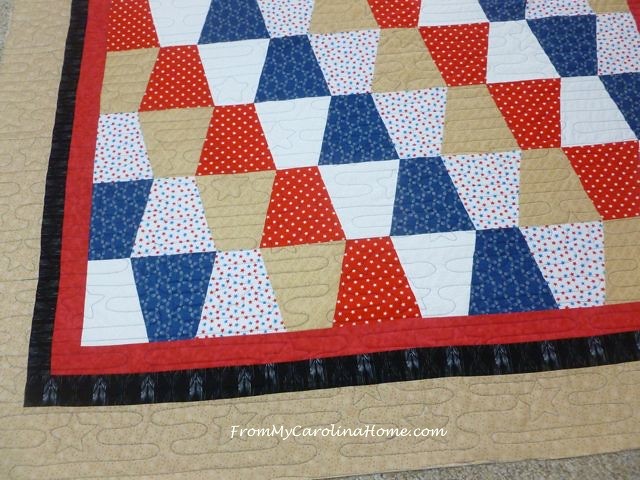 So, it’s all good.  If you are a new quilter, a self taught quilter, or you’ve never seen how to properly apply borders and why it is important to do them correctly, they are not hard.  Just see my tutorial on Quilt Borders Understanding the Why.  It goes through not only the ‘how’ of proper borders, but the ‘why’ and what happens when they are put on by the slap and sew method.  The quilt I just loaded is perfect, with outstandingly perfectly applied borders and is flat as the proverbial pancake.  I’ll show it to you all when it is done, but is a joy to quilt!!  Ask your program chairperson at your local guild to do a program on borders, and feel free to put the link in your newsletters to spread the word.

What are you working on now?

30 thoughts on “A Radical Idea to Handle a Wavy Border”