Continuing on with the Quilts of Valor for the Grand Strand Quilters, the next one is a panel with an eagle in the center surrounded with borders. The backing provided was a dark blue. 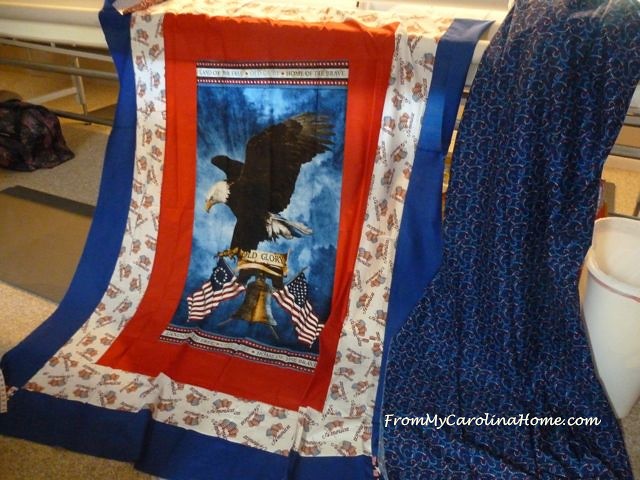 Once again, the borders are a bit full, and I suspect that they were not measured. The cornerstone blocks are not straight. 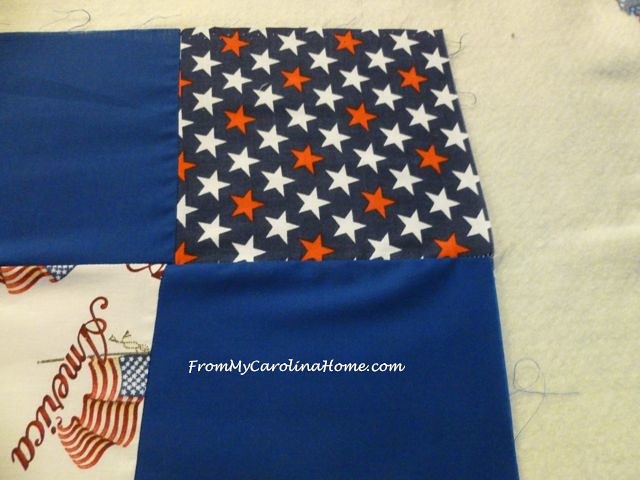 There is fullness in the middle too. 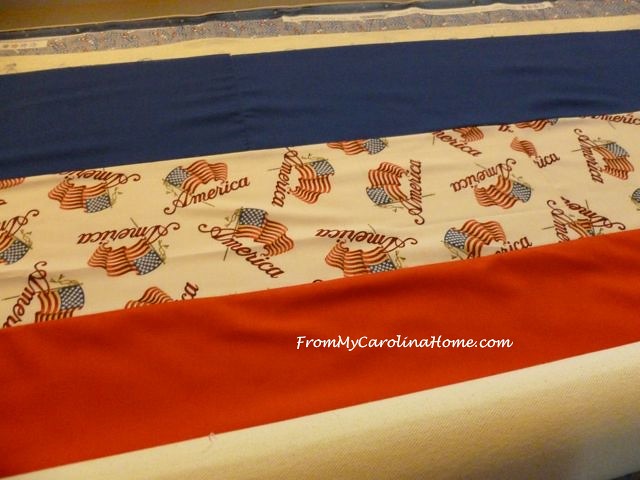 Folding it up from the bottom, you can see how the middle of the quilt is smaller than the edges, indicating too much fabric in the borders. 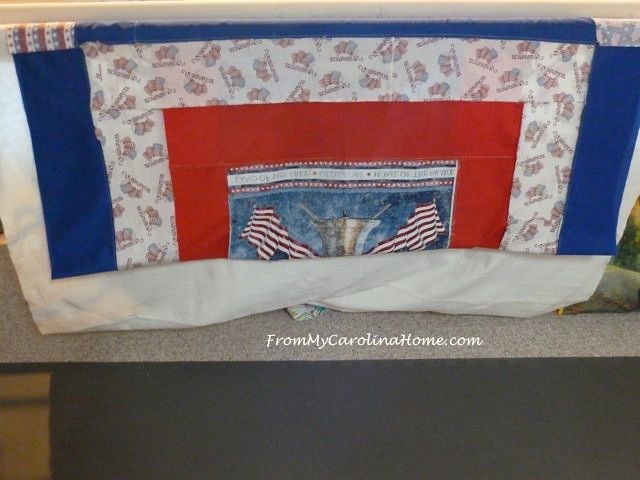 I removed it from the frame and steam pressed the entire quilt with the 50/50 solution I make of Best Press and water. I do use a spritz bottle, never put this solution in the iron itself. After some pulling and pressing, I was able to get the quilt a bit more squared up, with only a couple of problem areas left. 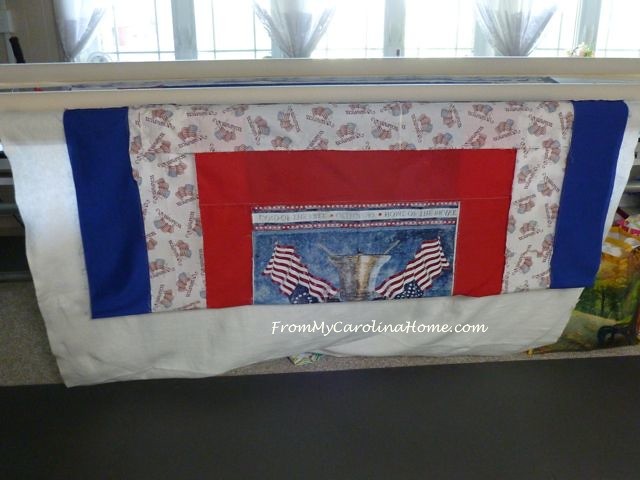 Next is auditioning thread. The important consideration with thread this time was not only the color of the backing, but the thickness of the thread. In order to minimize the impact of the quilting on the eagle, I needed a thin thread that would not obscure the eagle’s face.  The blue Aurifil thread was perfect, and matched the backing.  Yes, I often quilt with Aurifil, both the top thread and the bobbin. 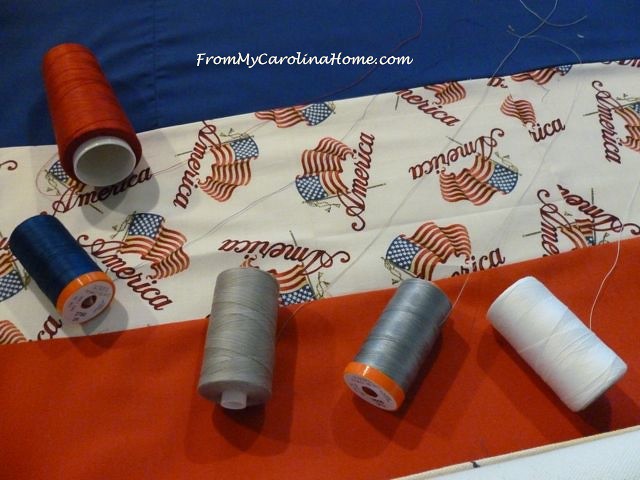 I decided on the gentle swirl of this pantograph, as it was suggestive of clouds like on the panel.  Here is one of the many puckers that appeared on the side. 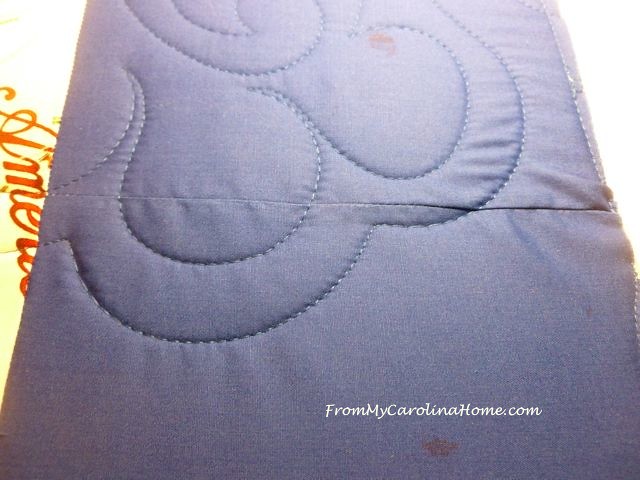 You can see some puckering of the fabric due to the excess of border fabric at the bottom of this picture. I really didn’t like this, but I didn’t want to rip it out. 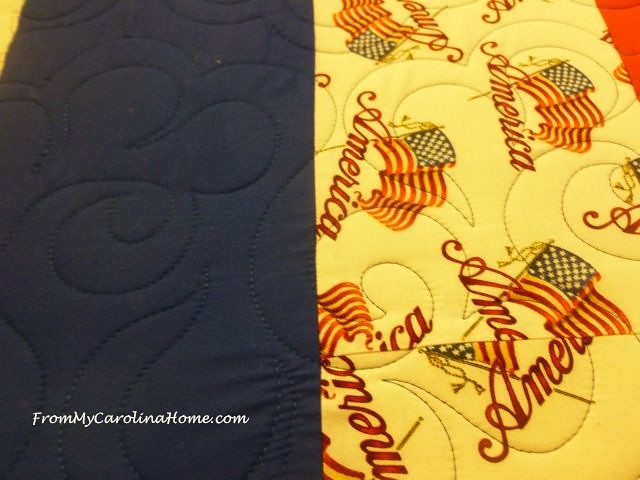 I think the quilting looks good on the background sky of the panel. 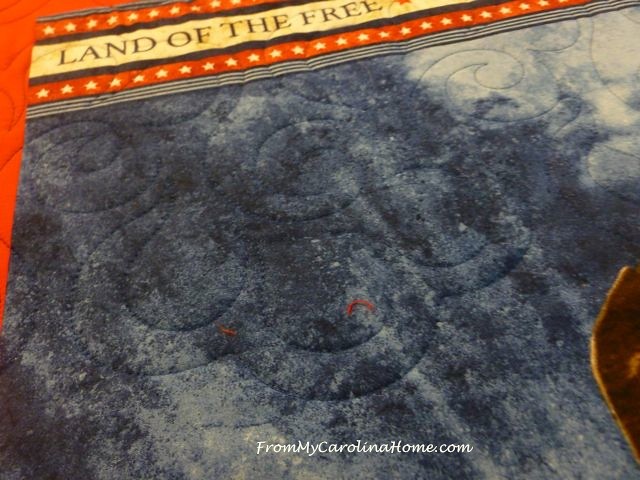 Some of the excess fabric on the border edges created fullness in the middle as I tried to keep the border seam lines straight. 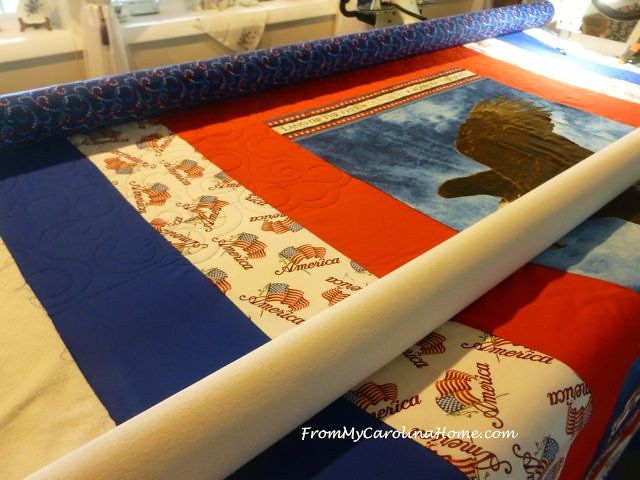 Once again, as I got to the bottom, the fullness and wonky corner became apparent. 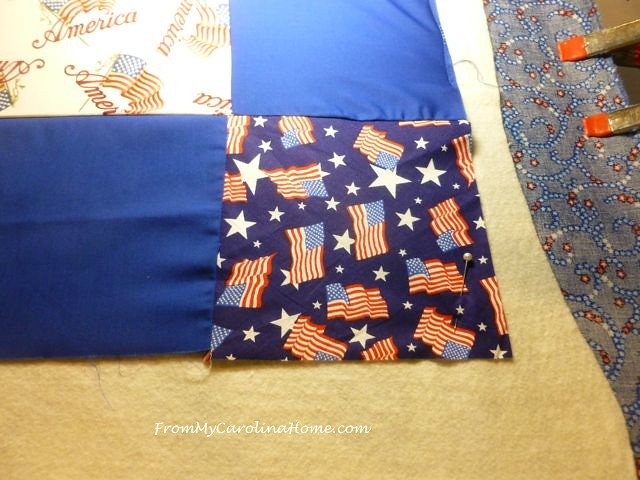 It seemed to be worse on the bottom blue border, as this much fullness was too much to work in. 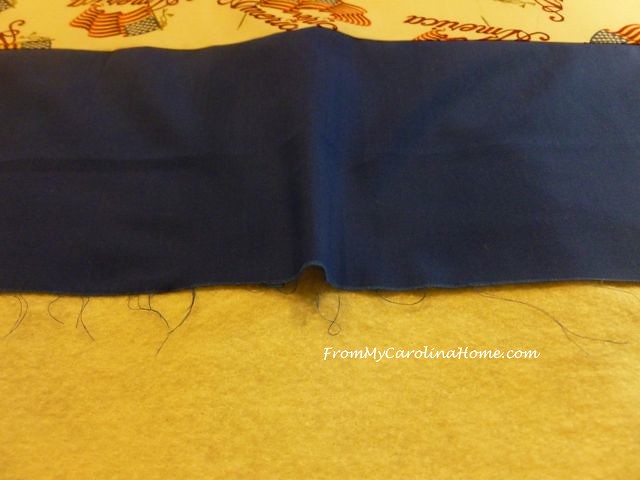 So, I made a pleat with the excess and stitched it down. I ended up doing four of these, one on each side and two on the bottom. 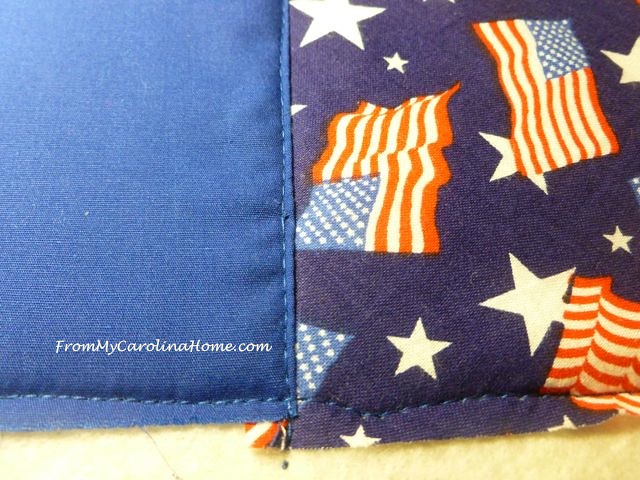 Even so, there is still puckering in the bottom border. 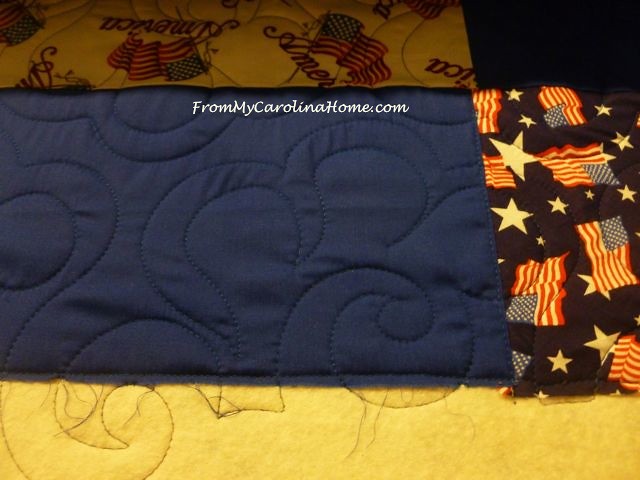 I know I harp on this a lot, but you can see what your longarmer has to go through when the borders are put on with the slap and sew method. I just wish I could get this message out to everyone. If you haven’t seen my tutorial on properly applied borders, click HERE to understand the difference between measuring and not measuring.

Puckers at the top of the picture too. Yes, these will be minimized with washing, but I don’t think these quilts are laundered prior to presentation. 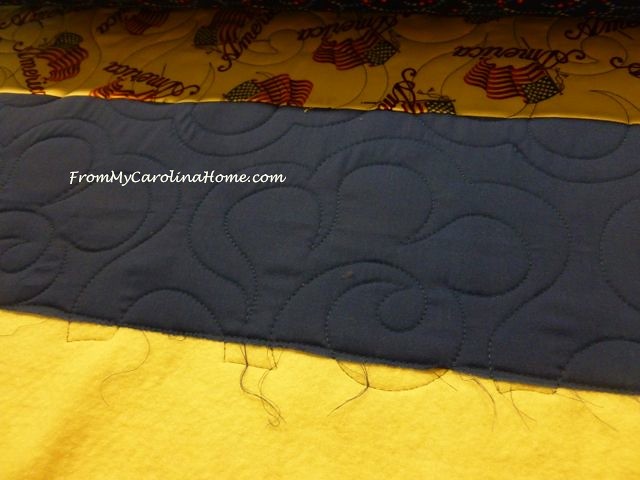 All done, I am not happy with the sides, but I did the best I could. 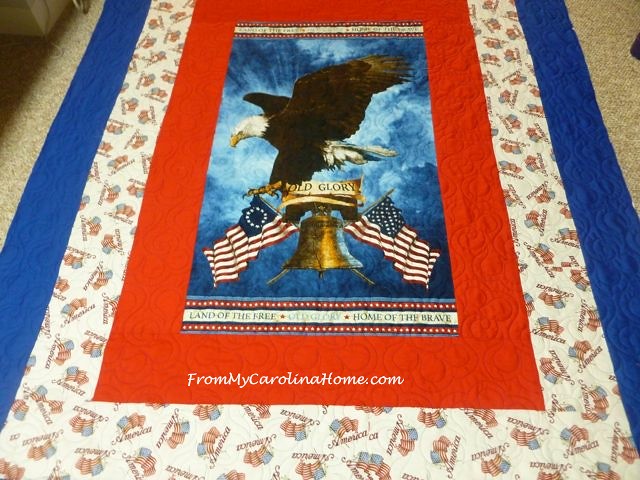 I was pleased with the Aurifil thread for quilting, as it is thin and doesn’t detract from the eagle. 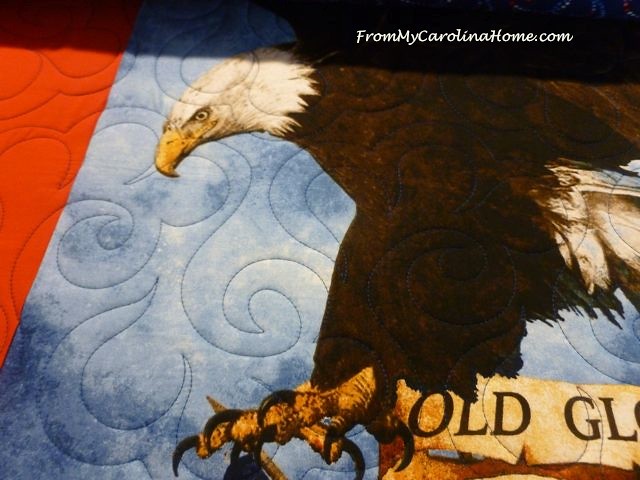 Ready for binding, it was sent back to Myrtle Beach. 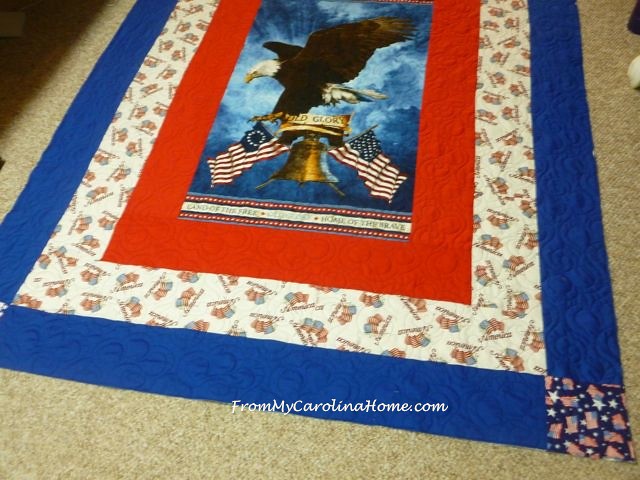 What are you working on today?