The Tony awards for the best of Broadway are coming up, so what better theme for a blog hop than Broadway Tablescapes, coordinated by Chloe at Celebrate and Decorate!  Plus, today I have some additional surprises for readers, so come along we have things to see, games to play and a giveaway too!  The actual award ceremony is June 11, so you have lots of time to see all the inspiration.  My inspiration for a tablescape and party come from an old theater I used to go to many years ago.  It was a stage theater that was remodeled into a movie theater.  The colors, as often are the case for stage theaters, were deep burgundy red and gold.   Ornate doorways with gold leaf carvings were gateways into another world for just a couple of hours.  Deep burgundy red draperies hung on the walls and across the stage with heavy tassels and gold fringe on the bottom.  Heavy brass railing went across the balcony, and matched the wall sconce lighting that dimmed to just a soft glow, instilling a hush across the audience as attention shifted to the stage.  There was always a bit of excitement and anticipation as the lights dimmed and the curtains parted to reveal the screen and the beginning of the feature. 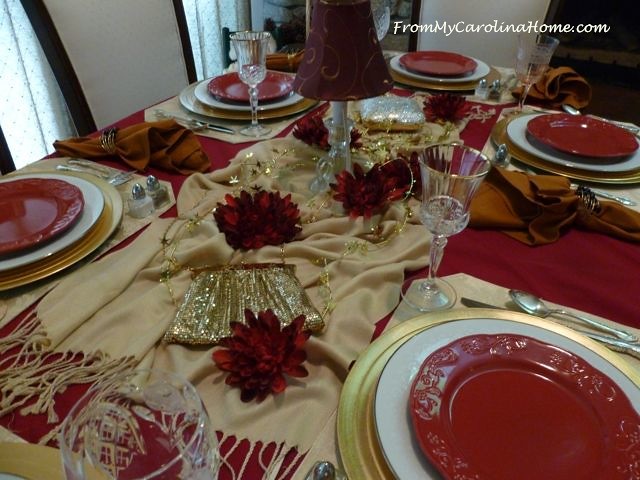 I challenged myself to create this table using only what I already had. Starting with the base, I put a dark burgundy square tablecloth on the table on point, resisting the urge to buy one that would cover the whole table. I have a pale gold lightweight wool shawl, and I placed it in the center, bunching it up a bit in the center and trailing the fringe on each end. My ivory damask placemats went on top. 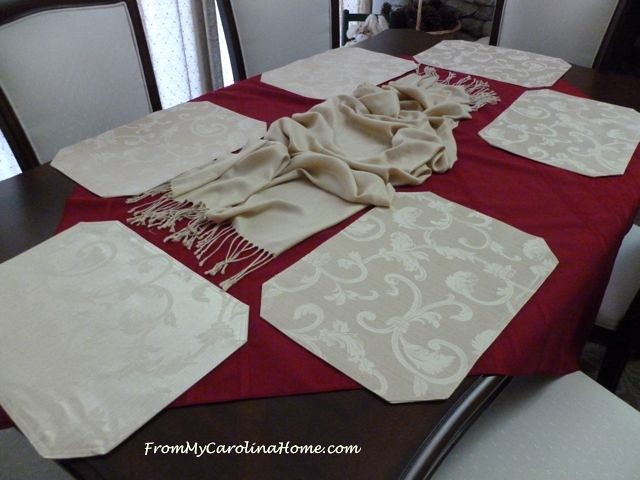 From the den, I snagged the little lamp we use when watching movies for the center of the table, rather than using candles.  The low light is helpful on the eyes when we darken the room for movie nights.  The lamp again reminds me of the low lighting of the stage theater. I ran the cord under the shawl. 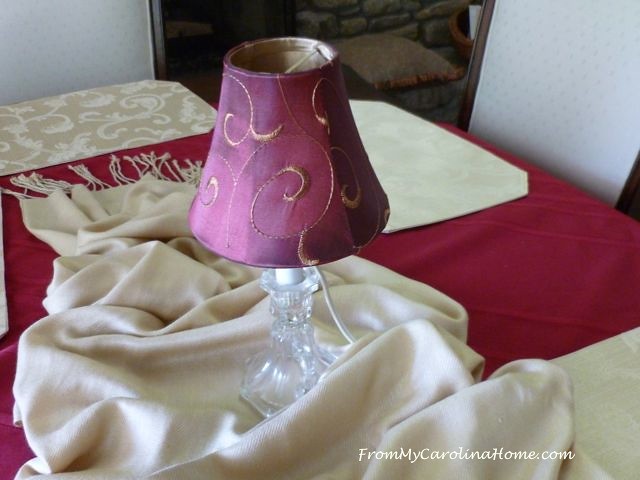 There is a plug on the floor not to far away from the table. The cord goes under the placemat at my place setting, then down to the floor and an extension cord to plug in the lamp.  I’ll make sure the cord is covered with a small throw rug so no one will trip on it. 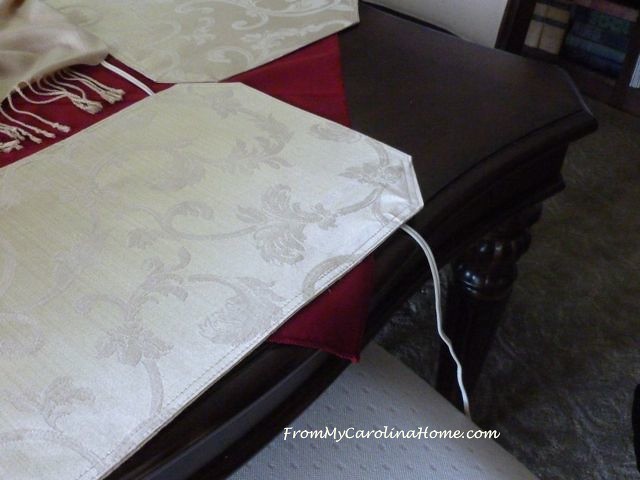 On the table, the shawl fringe hides the cord nicely. 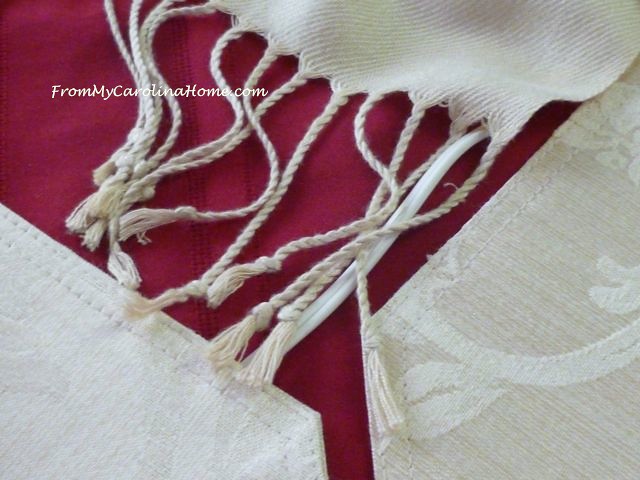 For a little glamour befitting an awards show, I added a couple of my vintage evening bags. I’ve used them on a table before too. I picked two that were gold or glitzy to keep with the theme.  From my holiday box, I pulled the gold star wire garland to add a bit of glittery starry shine to the table. 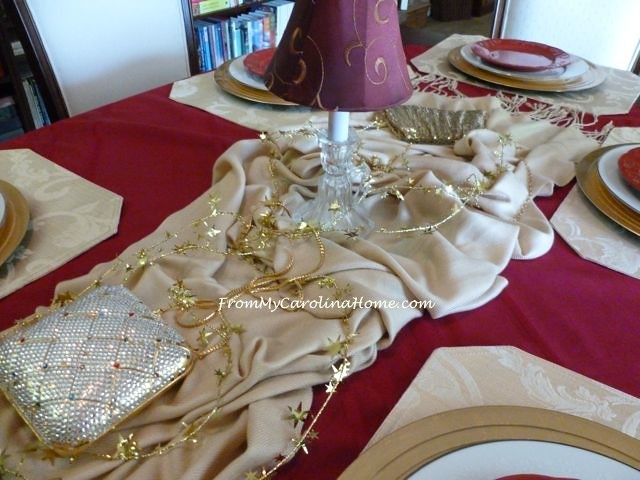 Each place setting has a gold charger, white china dinner plate, and dark red salad plate. The wine glasses are cut glass or etched glass in crystal with gold rims or soft pink. I don’t have six matching stems, so I mixed three patterns around the table. Each setting also gets individual salt and pepper shakers. Dark gold napkins are held with gold beaded rings. 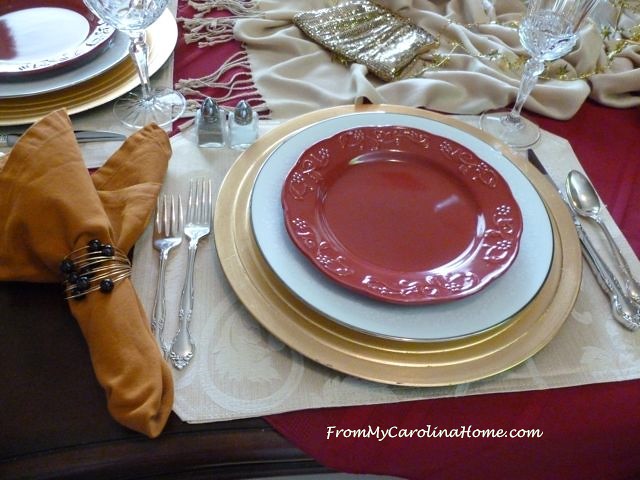 The good silverware is on this table too. As I stood back, it seemed to be almost but not quite finished. It needed just a bit of something more. 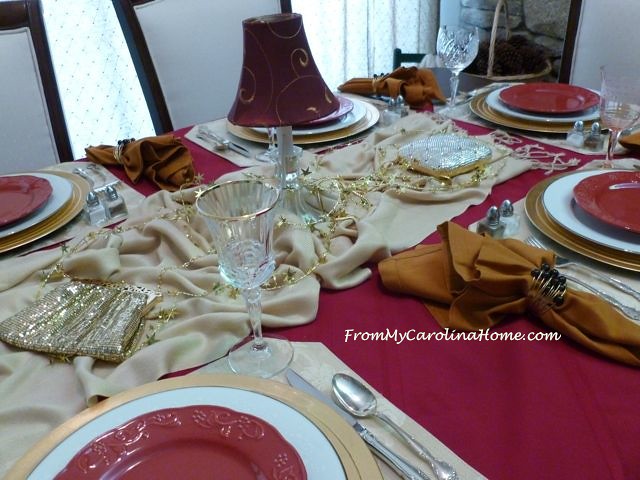 I pulled some silk flowers out of the flower stash, and removed the them from their stems. Scattering the dark red flowers around the centerpiece finished it off, adding just that touch of red that was missing. 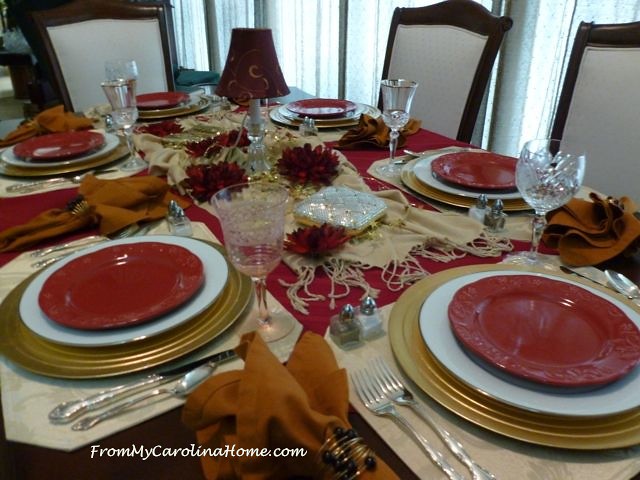 Then, I turned off the lights and waited for evening to fall so I could see it with the lamp lit. Perfect. 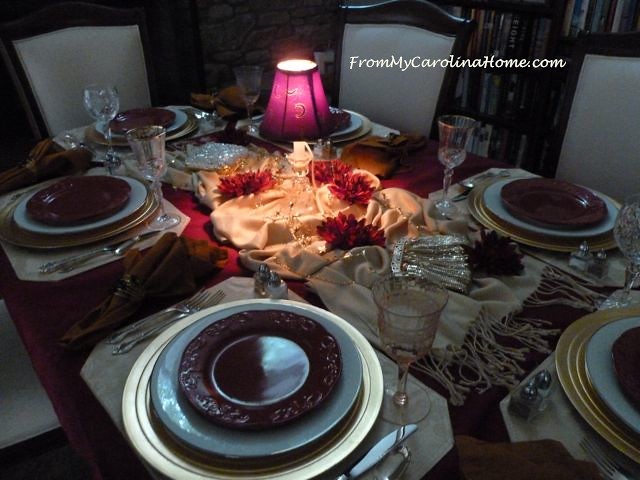 How fun is this!! It brings that theater experience to the table. The only problem is daylight saving time means we’d be eating really late. That probably won’t happen on a Sunday night. These award shows should be on Friday or Saturday, when it is more feasible to have guests stay late. But, of course, if you really want to, you could record the show, and watch it a few days later when it is easier to stay up and have people over later. 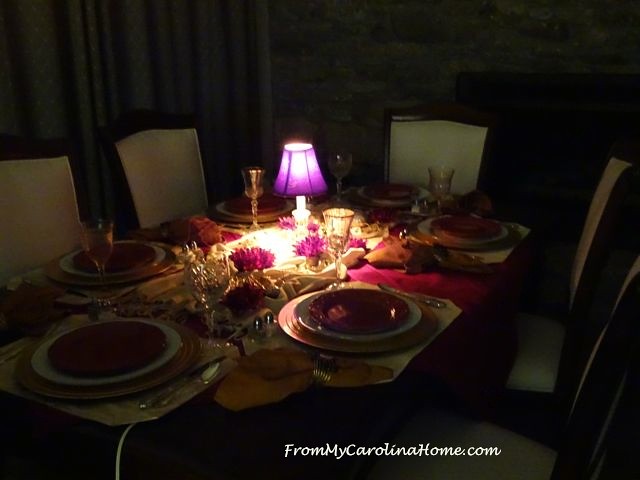 And you just might want to do that with the game I have for you, Broadway Bingo! The rules are quite simple, play just like Bingo. Each of the 8 provided play sheets are different, with five different categories each containing five nominees for the 2017 Tony Awards. Only categories with five nominees were chosen for the boards, such as Best Leading Actor in a Musical, or Best Featured Actress in a Play, along with other categories like Best Direction or Choreography. Mark winners as they are announced in the given categories. Participants can circle winners with ink, or use a yellow or light color highlighter. Five in a row, either across or diagonal is a winning board.

There are two additional entries at the bottom of each sheet with Best Play and Best Musical for a second chance win, or use as wildcards.  Family friendly for an evening of fun!
Download the Rules and 8 unique game boards by clicking on this link – 2017 Broadway Bingo 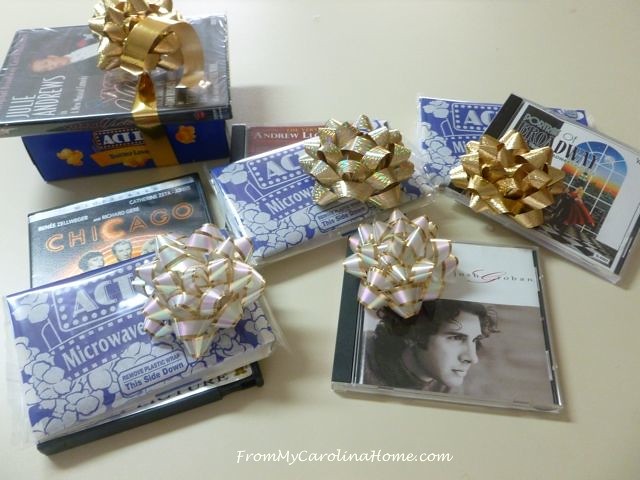 Provide a few prizes for participants to win, inexpensive gifts with a Broadway theme are easy to do. For example, prizes could be videos of Broadway hits made into movies, or books that became Broadway hits and microwave popcorn tied with ribbon. I used Act II brand popcorn just because it fit the theme. No one will mind if the videos or books came from the library secondhand sale. If no one wins, then have the participants put their names on the boards and draw one. 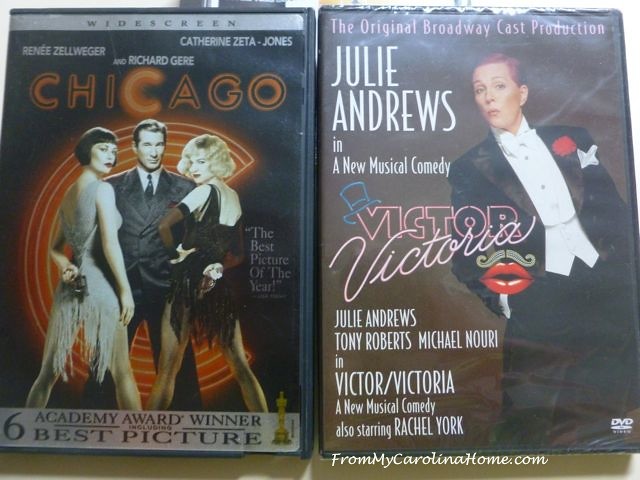 (Giveaway has been done.)  Josh Groban is nominated for best leading actor in a musical for “Natasha, Pierre & the Great Comet of 1812” this year, and I am rooting for him to win. 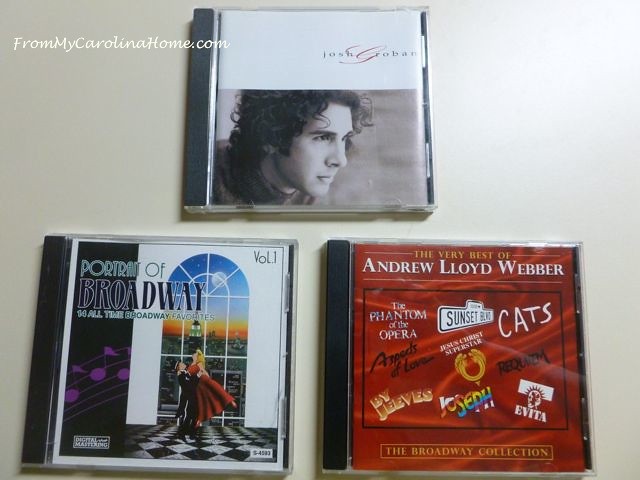 More fun for you today, a fantastic blog hop of more tablescapes with a Broadway theme.  Be sure to visit all the bloggers this week for lots of great ideas.  And thanks again to Chloe for coming up with this fun theme and putting the hop together.  Her tablescape is scheduled for Friday at Celebrate & Decorate!

Good luck in the drawing and have fun playing Broadway Bingo!  What is your favorite Broadway play or musical?  Have you ever seen a Broadway show on Broadway?  Do you have a memory of an old style theater? 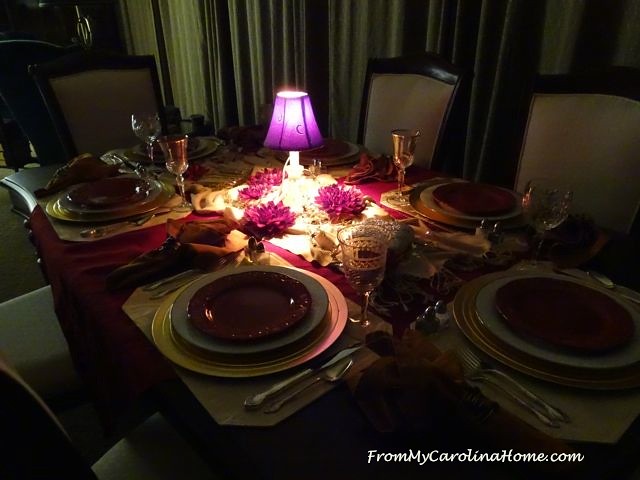 Talk of the Town

53 thoughts on “Broadway Tablescape, Game, and a Blog Hop”