A nice long weekend and it looks like it is going to rain on Sunday all day, and maybe Monday too.  DH and I had planned a hike, but I think it will turn into a couple of days of sewing and reading.  Actually, those are wonderful days in my opinion!  Now is a good time to tell you about a series I have enjoyed.  It is another in the cozy mystery genre, refreshingly with an older woman in her 50s as the central character (instead of the usual mid-30s cutsie with the hunk policeman boyfriend).  Beginning with the first in the series, Crewel World, readers are introduced to Betsy and her sister Margo in a small town in Minnesota.  When Betsy’s sister is murdered in the store, Betsy is taken on an emotional roller coaster, eventually needing to do some sleuthing on her own to find the truth.  She inherits the store and has to learn how to run it with the help of the part time staff. What started out for Betsy as a refuge from a bad divorce turns into a learning experience for taking care of herself.   The neat thing is the focus on needlecrafts, not only crewel, but knitting, crochet, and cross stitch.  Each book has a pattern in it too.  Next is Framed in Lace where a skeleton is found wrapped with a piece of lace that holds a clue.  These first books are only available in paperback, and I think I donated them back to the library some years ago.  I really would rather read hardback books, I find them easier to hold and read.  As I finished books in this series, I put them on an antique shelf that is sitting on the mantle in my basement sewing space.  Books work as decor you know, as I wrote about in Decorating With Books and More Decorating With Books. 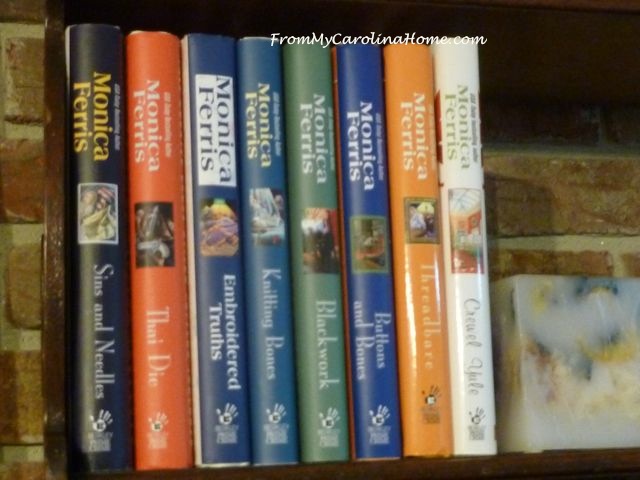 The next book in the series is Stitch in Time dealing with a damaged tapestry.  It is followed by Unraveled Sleeve where Betsy and her friend Jill go to a knitting retreat.   The fifth book Murderous Yarn, deals with antique car racing.  I found this one particularly interesting as DH has done some vintage racing in the past.  Again, a piece of needlework holds a clue to the truth.  After the second book, the books can be read out of order, as not much changes in Betsy’s life.  That is the only disappointing thing about the series.  There isn’t a lot of growth in the main character, or change in her life once her divorce is done in the first book.  I find that I am more curious about the other characters in the series and how their lives change.

I think one of the better mysteries in this series is Buttons and Bones (#14), set in a remote cabin where a skeleton is found under a linoleum floor.  This one really had a different story than the usual, dealing with events long ago during World War II, and again a needlecraft in the form of a crocheted rug is a clue to the truth.  In Threadbare (#15), a homeless woman is found dead wearing an embroidered blouse that is her will.  Another twist on the usual story, Betsy has to solve two murders that are connected. 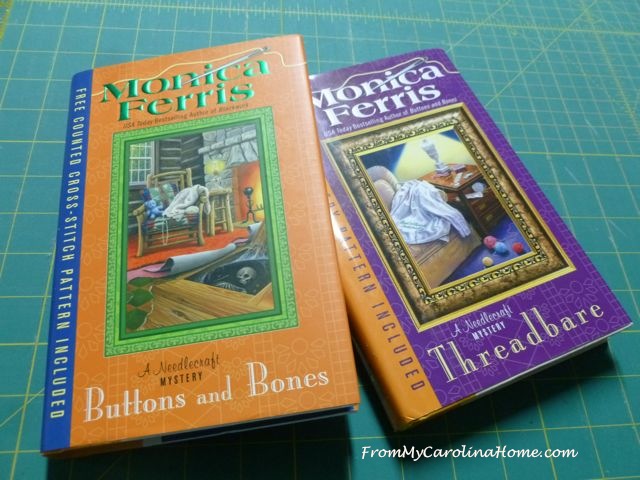 So, you have a series of cozy mysteries with needlework.  No, they are not great literature, and sometimes the mystery is a bit too easy to solve, but after dealing with CEUs, I am ready for something a bit mindless.  I still have these two on the to-be-read pile.  And Then You Dye is book #16, and The Drowning Spool is #17.  That will likely be it for me for one series, I have too many other books to read. 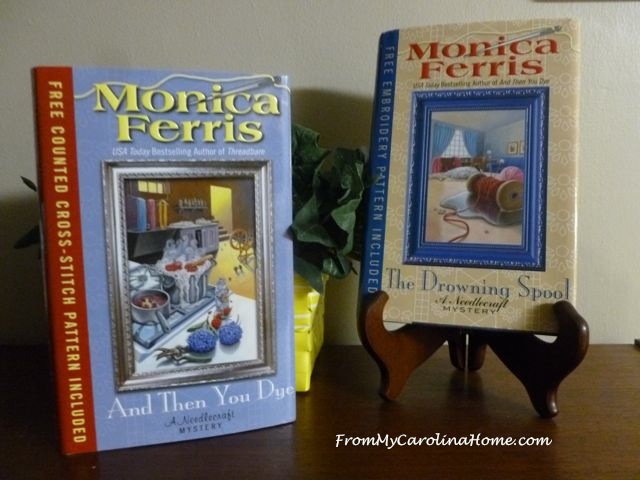 After a while you begin to ask, how many murders can happen in a small town?  Horrors!  And the series sometimes gets a bit stale.  Maybe that is why I haven’t picked these up.  But the last one I read was Crewel Yule, book #8, read out of order because I wanted to save it for the holidays.  I did enjoy it, so hopefully I can get back to these soon.  Perhaps I can visit Excelsior again soon, checking in with friends not seen in a while.