It is hard to believe it is August, this year is going by in a blur of days that mostly look the same.  But there have been a few happenings here, and the flower show keeps going.  Time for a long and picture heavy post!!  Vibrant pink geraniums bloom profusely in just one pot. 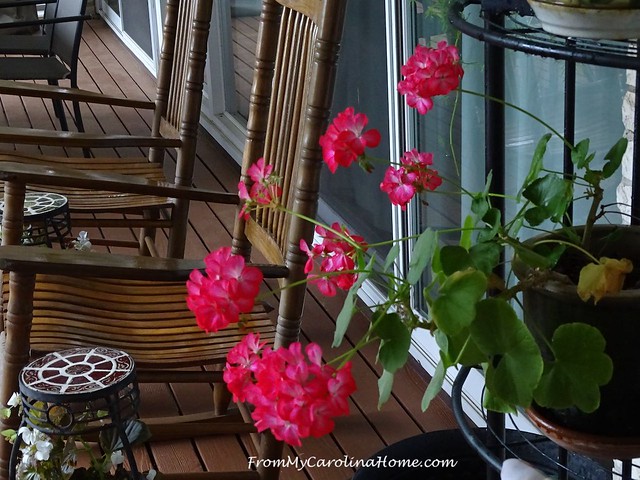 In the front flowerbed, the phlox is putting on a show. 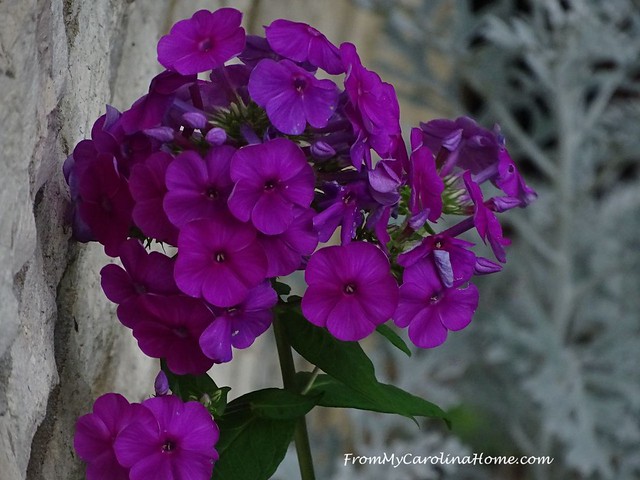 A fleeting glimpse of the hummingbird in the shadows, lower right.  They are usually gone by the time I can get the camera on and focused. 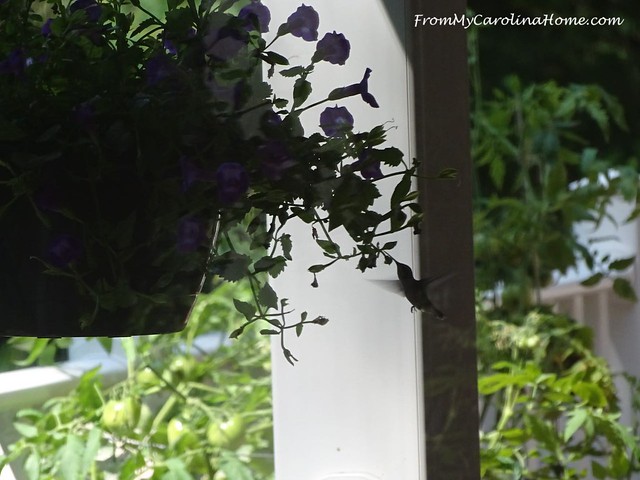 The hydrangeas are blooming so much that I am cutting bouquets of them for both the kitchen counter and the coffee table.  They still aren’t pink though.  More lime went on them as they keep going back to blue. 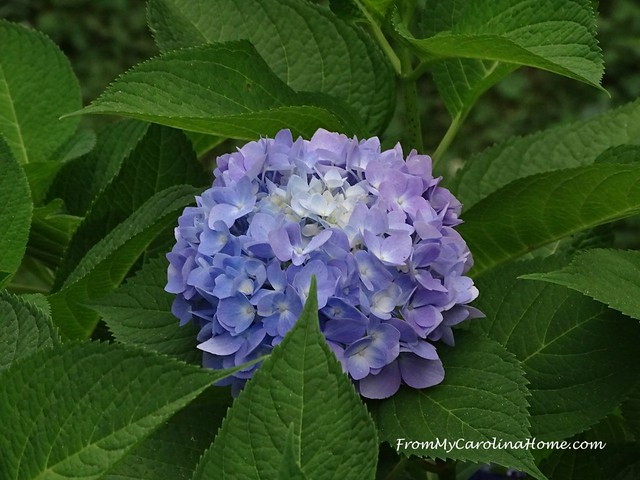 A big storm in June broke off a tree about 100 feet tall about halfway up.  One section was still attached to the trunk and hanging upside down (on the right), and looked to me like the heptopods from the movie Arrival.  My Sweet Babboo says I have an active imagination.  The rest of the broken part was stuck high in the treetops, with another branch stuck in the next tree.

Anyway, another storm recently brought down the broken part, about 50 feet of trunk and limbs, right onto our back fence.  I felt it when it hit the ground, and briefly thought it was a small earthquake.  We have had those before.  But it was the huge section of dead limbs falling out of the treetop. 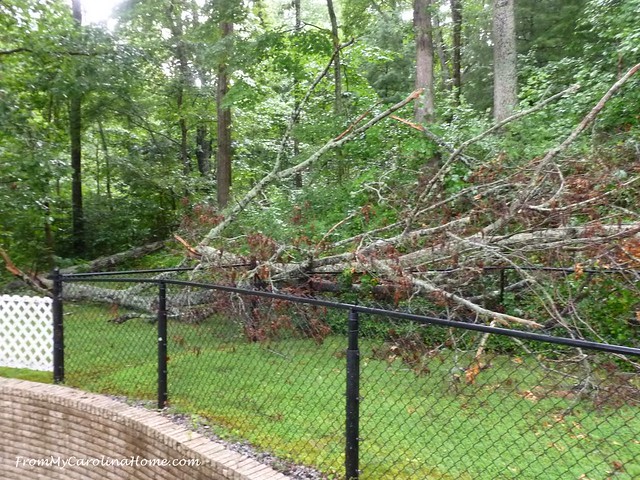 It flattened our gate, bent part of the fencing, and made quite a mess.  This happened about two days before the tree guys were supposed to come take it down.  Well, that made their job a bit easier. 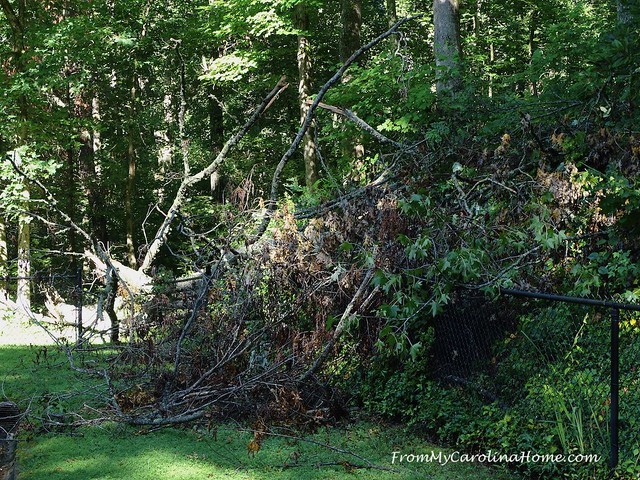 It took a whole crew of guys to get the heptopod down, debris cut up, and small branches run through a chipper.  Some really large ones were moved to the side yard, and a guy is coming later to get them to chop into firewood.  He then will donate the wood to those who need it to heat their homes in winter. 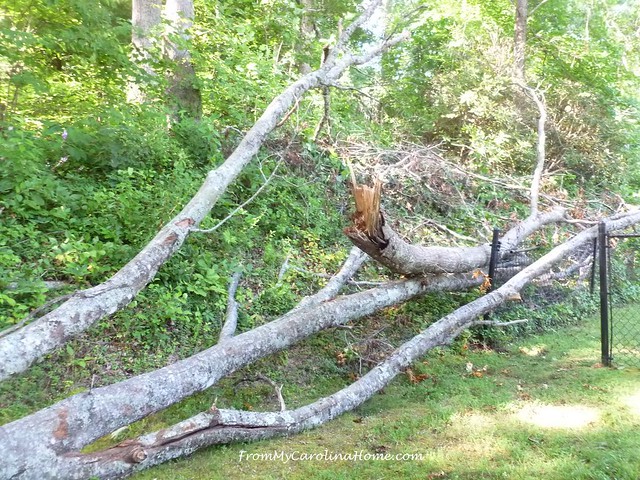 On the other side of the mountain out back, the gladiolas planted by the former residents of this house have multiplied and were in bloom. 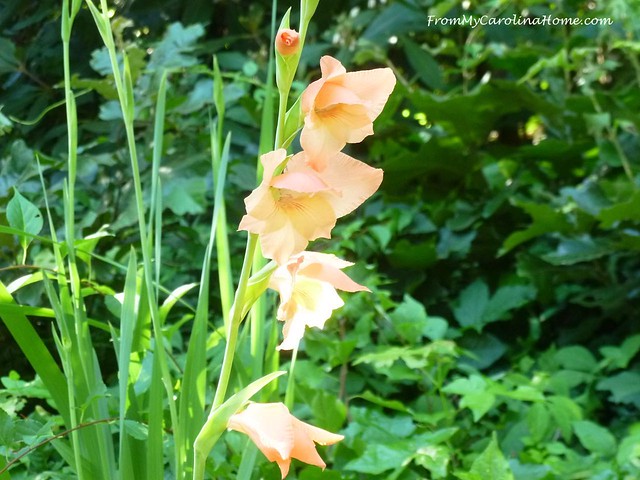 There is a nice stand of them now, all in a light apricot color. 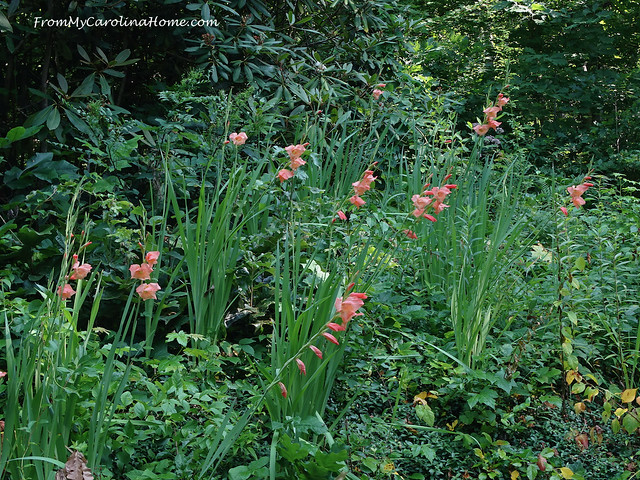 Lovely aren’t they?  We can see them from the office window. 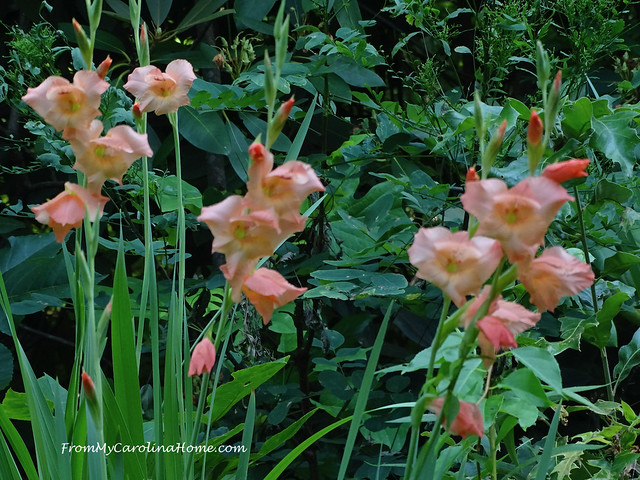 The goldfinches have been here daily, a nice flock of bright yellow birds. 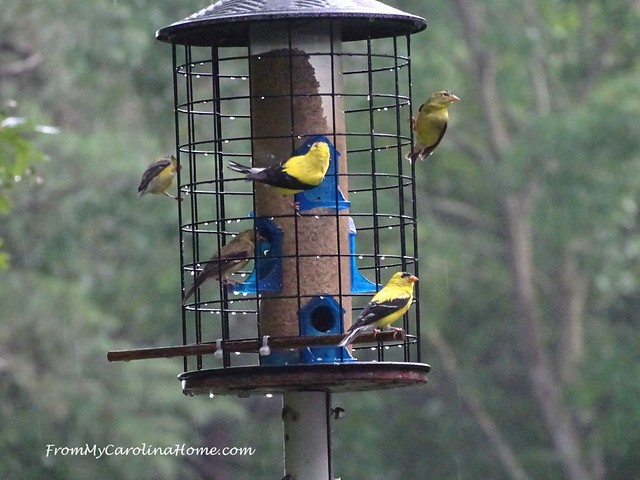 Yes, the bears are still here, too.  Mom and two cubs were here one morning. 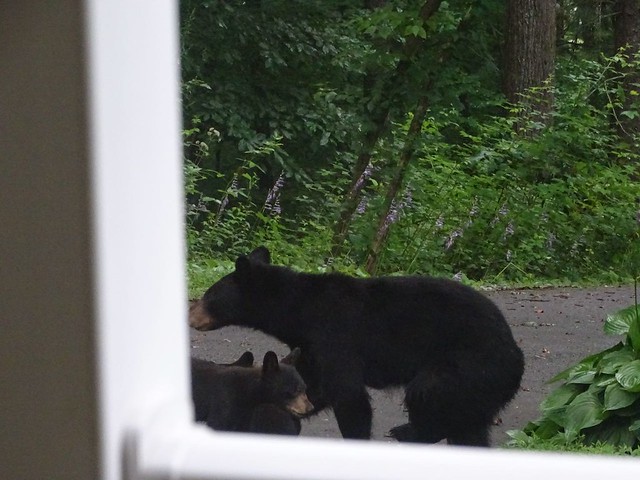 Thankfully, they are easily scared off with some noise. 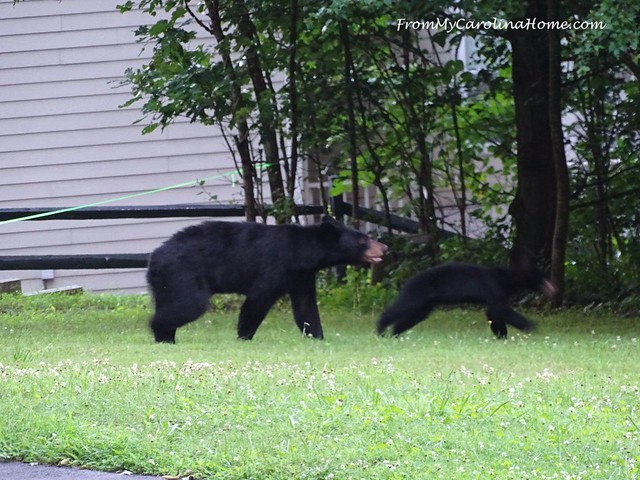 Remember my orchid that finally bloomed?  Believe it or not, the bloom is still going, more than six weeks later.  It opened fully on June 10, and as of now it still looks exactly the same.  The other two buds haven’t progressed at all.  I have it in the warmth and humidity of the front porch now, and moved it yesterday to the railing where it will get a bit more sun. 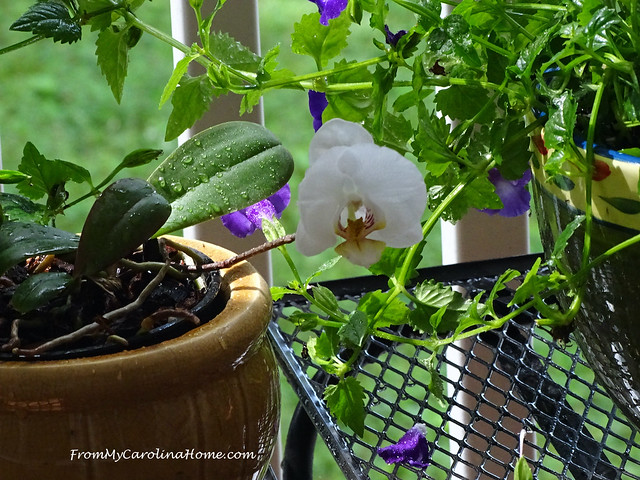 More visitors, a mother deer and two daughter fawns are making frequent visits.  They eat the volunteer hostas on the side of the drive, but leave my nice bed of them alone.  No idea why.  I think they are eating the blackberries too.  I went to see about picking some for us, but the berries are tiny and not worth the effort. 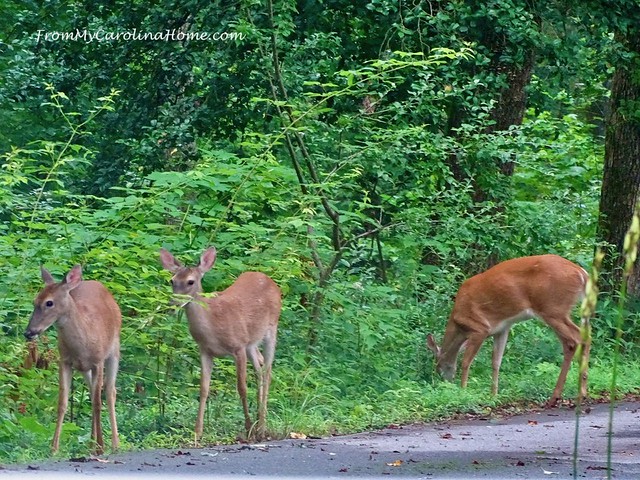 Speaking of bounty, the best crop I’ve ever had of tomatoes are ripening on the plants. 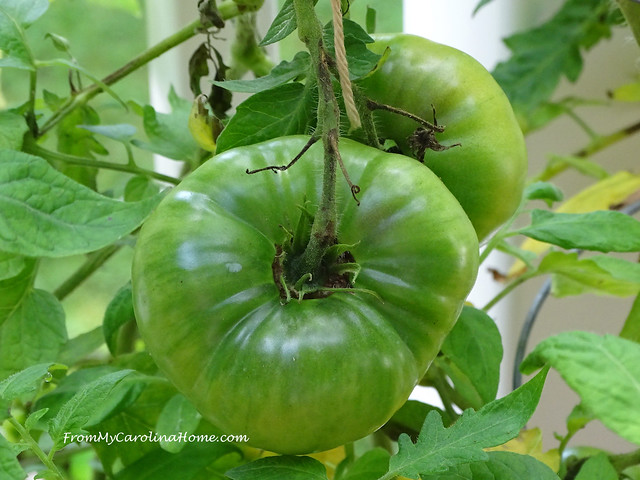 Every variety I planted is doing well, heirlooms and Cherokee purples will come soon, and some of the Early Girls have already been on sandwiches and in salads. 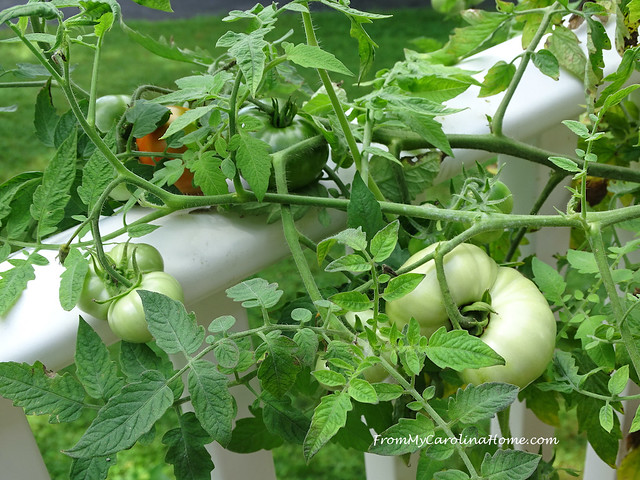 The latest harvest, two heirlooms and four Early Girls.  They are small, but so much flavor!!  I see a Tomato Pie coming soon! 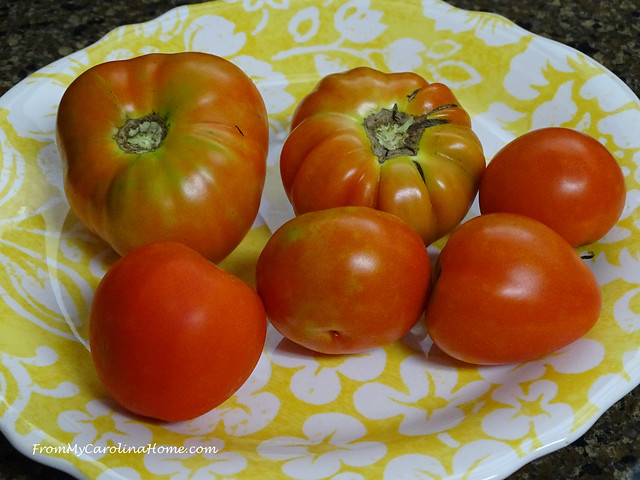 Oliver seems to be behaving himself, and he is getting regular tidbits. 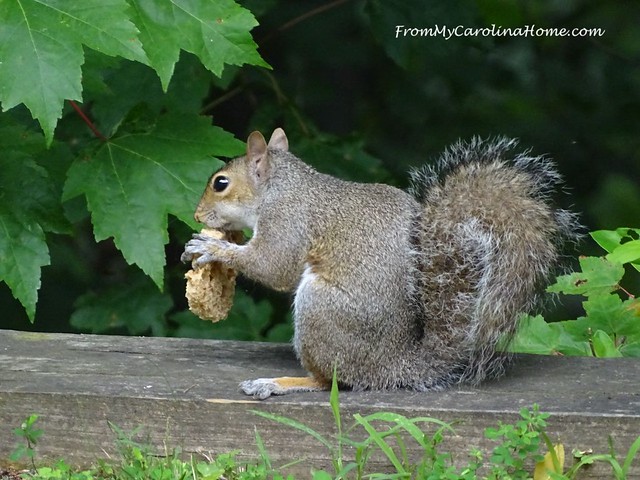 Another fun thing, two of our neighbors going down the hill have cut trees down.  This has opened up our view again, to our delight. Here’s the ‘before’ view.  You can see that in all the years we’ve been here, the trees have really grown up! 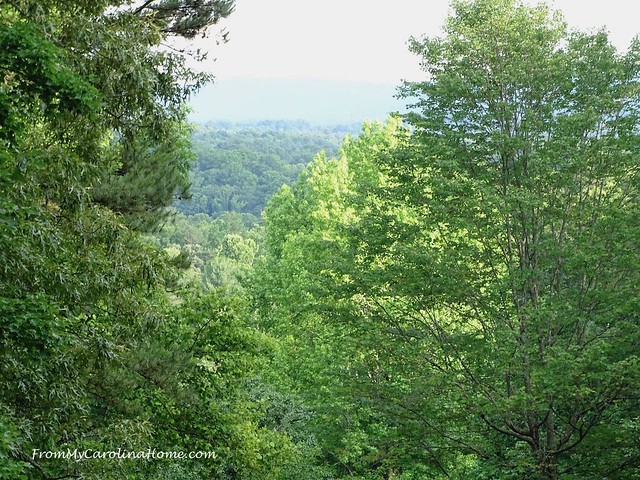 But with three of them gone in the middle of the view from the veranda, we can see much of the valley and layers of hills in the distance again. Our own trees have encroached on the view from both sides, but for now, we are leaving them alone. 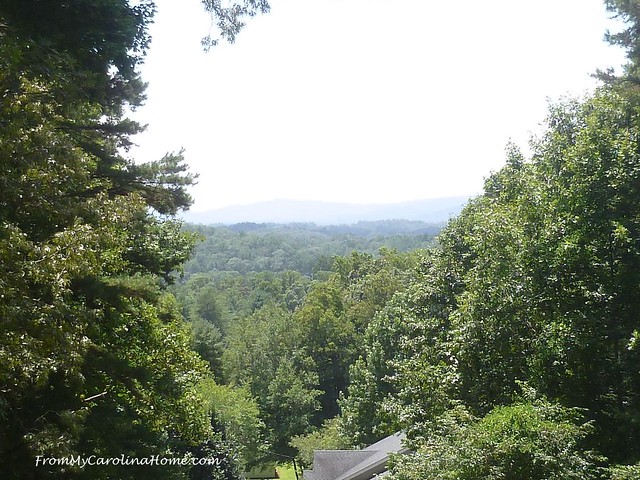 This unusual moth was seen hanging off the geranium last week. Parts of its wings were so translucent that you can see the color of the flower through them. 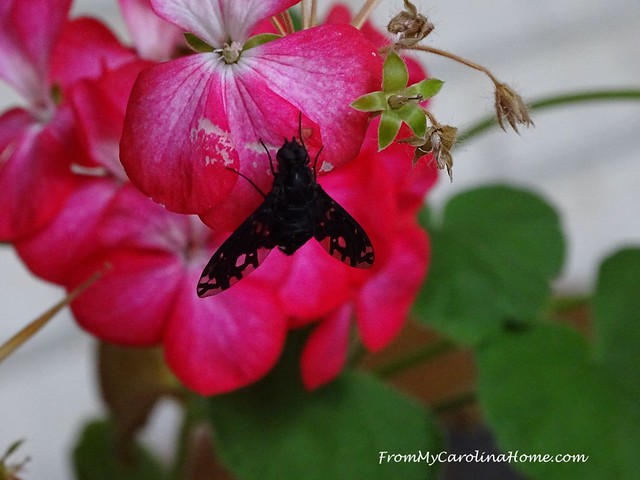 Also on the veranda, a purple dahlia bloomed this week, with gorgeous deep color. 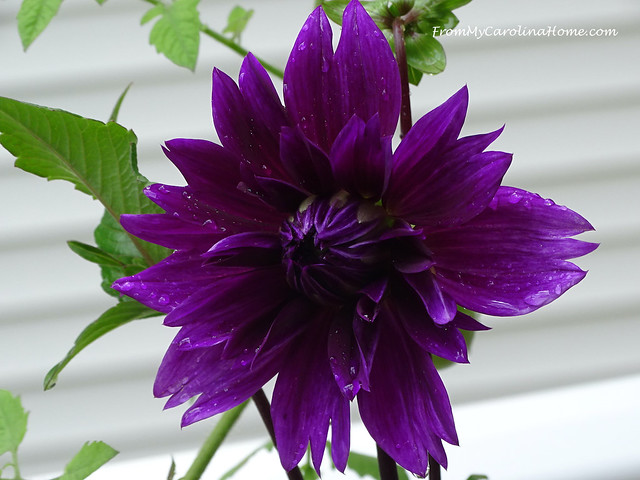 We are supposed to get rain for a day or two so I’ll be inside sewing.  I have a quilt along hop to do this week, so look for that on Tuesday.   More later!  What’s happening in your garden?

37 thoughts on “August in the Garden”