I am trying hard to watch all the videos I have on that soon-to-be-gone video streaming service (details below), and of course got inspired to make a few cards.  I wanted to use the embossing technique I had just viewed, especially since I haven’t done any embossing in quite a while.  The lessons dealt with coloring and stamping before and after embossing. 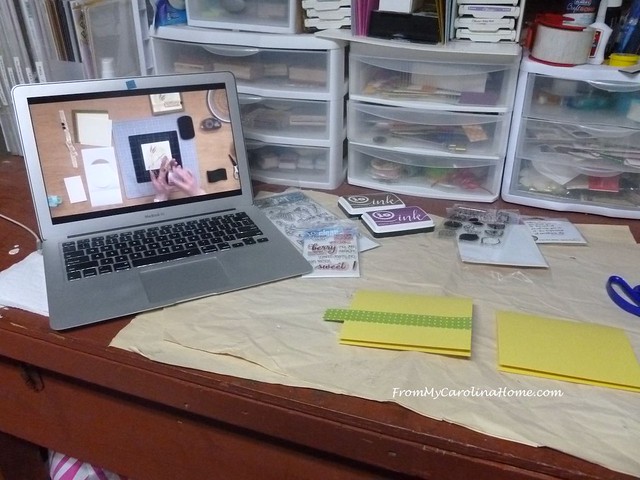 The theme at Impression Obsession was Play With Your Food so I used a couple of those sets that were perfect.  First, I used one with citrus fruit and the sentiment “Squeeze the Day”.  The set is called Citrus Set, and is discontinued and on sale now until supplies run out. 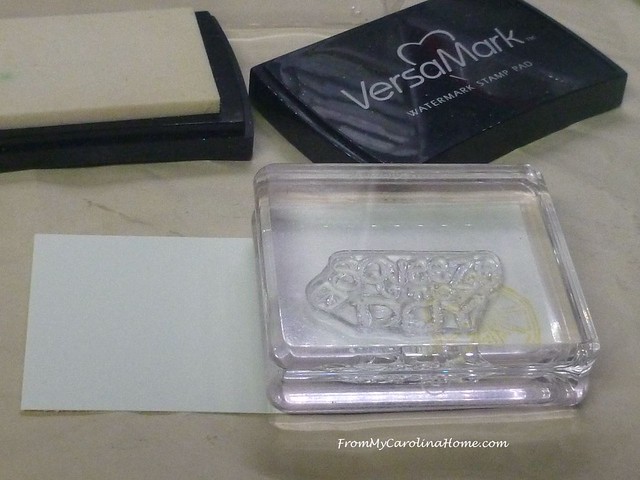 The technique was stamping over embossing, but it made more sense to me to emboss over the stamping.  I experimented with both ideas at once, stamping a lemon slice on a corner, then going over it with a sentiment using the Versamark pad.  Gold glitter embossing powder is generously poured on top. 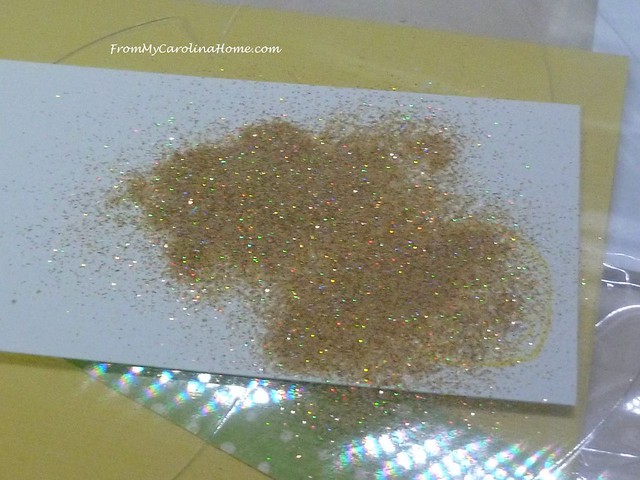 Then the excess tapped back into the container.  I heat set the sentiment. 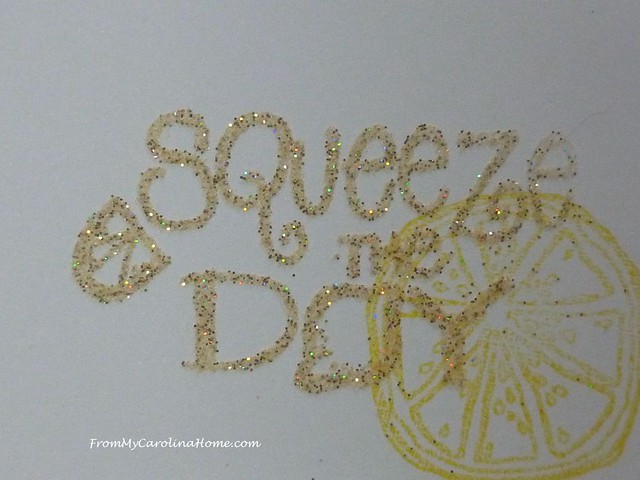 I had a lovely orange paper to use as a base, and I added a few lines of jute in gold.  I used tape adhesive on the back to secure the cords, wrapping around the paper. 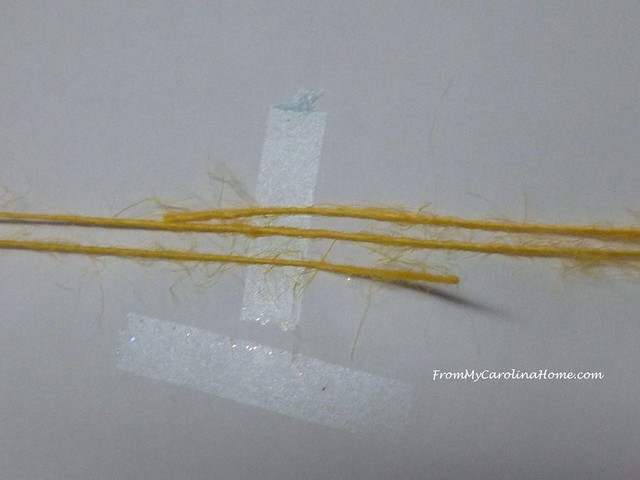 I stamped lemons, limes and oranges around and over the top of the embossing.  This worked fine.  The color that gets on the embossed area from stamping over it can be wiped off, but it worked just as well to stamp the lemon first with less fuss.  I mounted the sentiment on a lime green frame and placed it in the center. 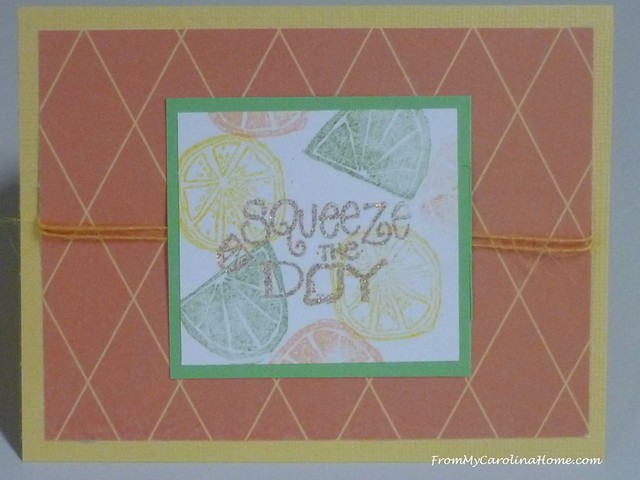 For the next embossing technique, I stamped a strawberry Summer Cupcake on white card stock and used red glittery powder to emboss. 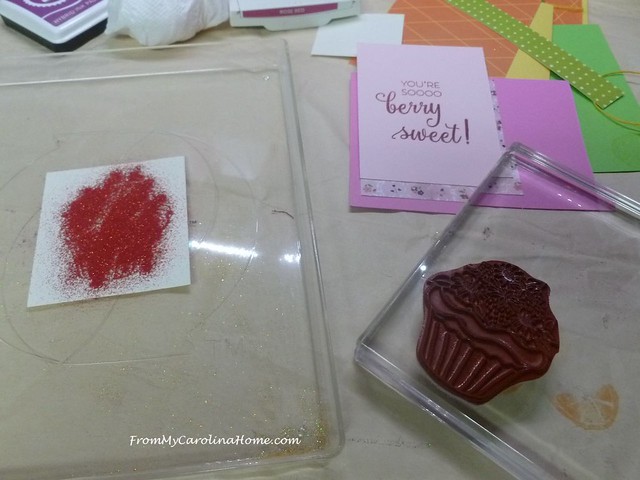 Heat set the image with an embossing tool. 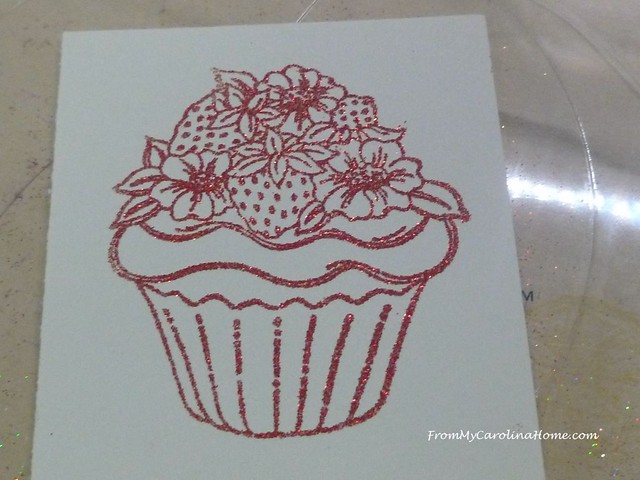 This technique used the embossed area to color with inks.  I used a paintbrush to get the colors right where I wanted them.  Just press the brush on the ink pad, and go over the areas where you want that color.  Using a bit more on the edges of the image creates depth. 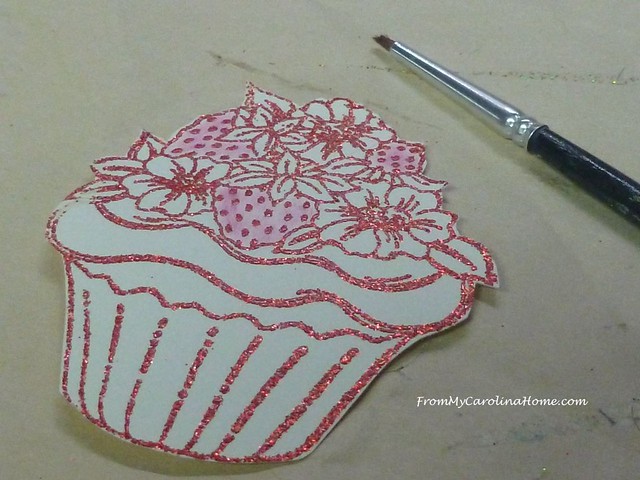 The sentiment comes from a set called Berry Sweet. 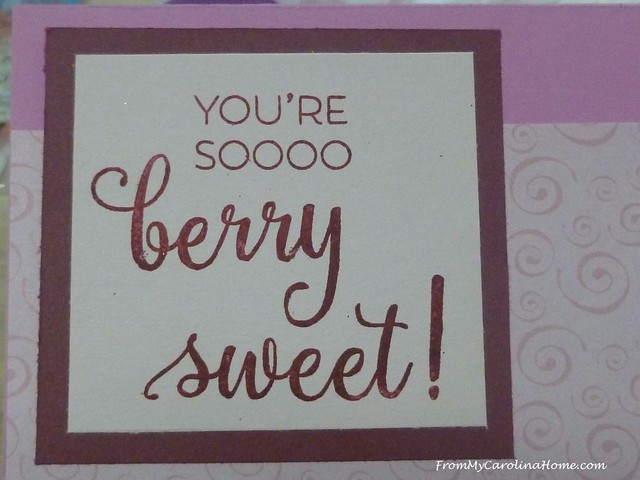 The second idea from that module was to cut out the embossed image.  This was easy to do as the embossing creates a slightly raised edge that is easy to follow with paper scissors.  I used dimensional foam squares on the back. 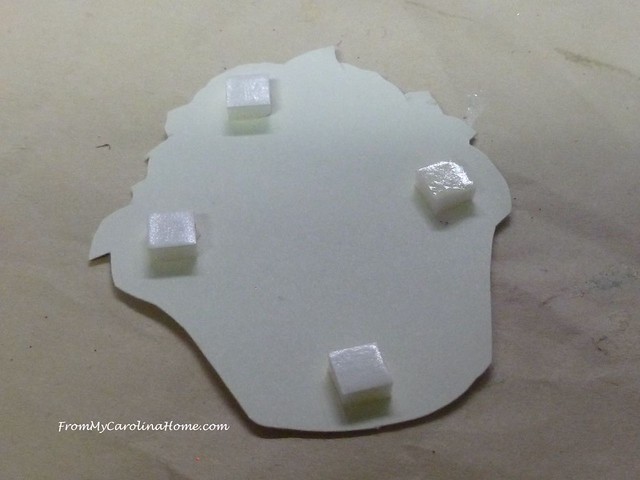 A base of pink swirl paper that looks a bit like frosting is glued down first, then the framed sentiment and cut out cupcake are added.  I placed the cupcake at a slight angle, and overlapped the frame just a smidgen to create depth.  Next time I’ll add just a touch of yellow to the cake part of the cupcake image, and maybe a bit more color on the paper wrapper part. 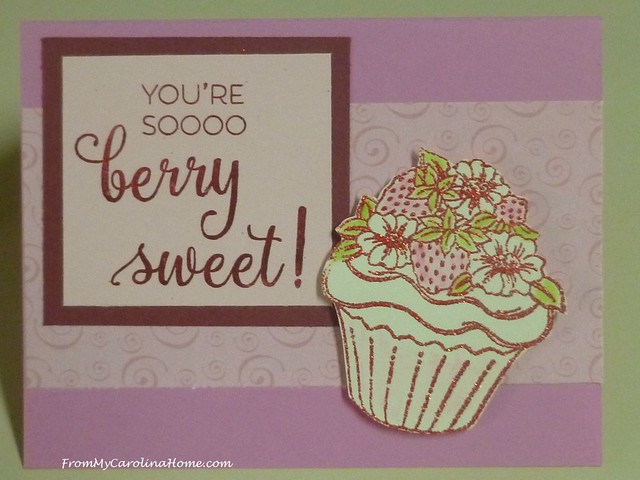 All done, two cards for the shelf, ready for any sentiment inside when I need a quick card to send out. 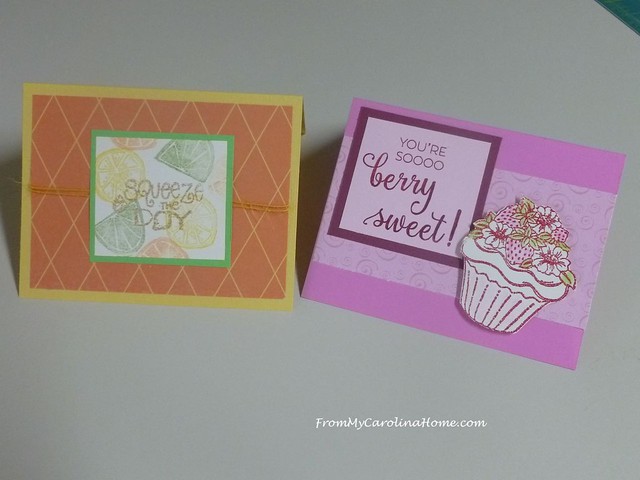 I’ve already picked out my next sentiment to order from Impression Obsession, this one – Gardening is cheaper than Therapy and you get tomatoes!  Then a few veggie stamps to go with it for summer fun this year.  I’m still playing with my food, LOL!! 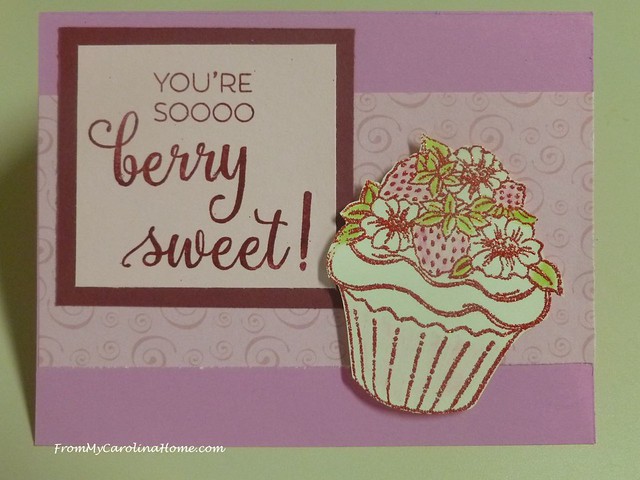 Are you playing with paper or stamping?  Have you caught up yet on any videos you haven’t watched?

Sharing – Best of the Month

17 thoughts on “Stamping Cards with a Food Theme”