If you have a quilt needing repair, see my page Well Loved Quilt Repair  before emailing me.

This repair has taken me weeks to finish.  Initially, the idea was to load it on the longarm and topstitch the patches needed because there were so many to do.  But when I got it, I realized that the machine repair would make a mess of it as the backing was larger than the top.  This would result in tucks and puckers all over the back, and possibly on the top too.  The quilt was tied instead of quilted, usually a problem in this regard too.  You can see that there are lots of patches completely worn away.  The owner was not concerned with how long it would take or how much it would cost, so I decided with her permission to do this by hand. 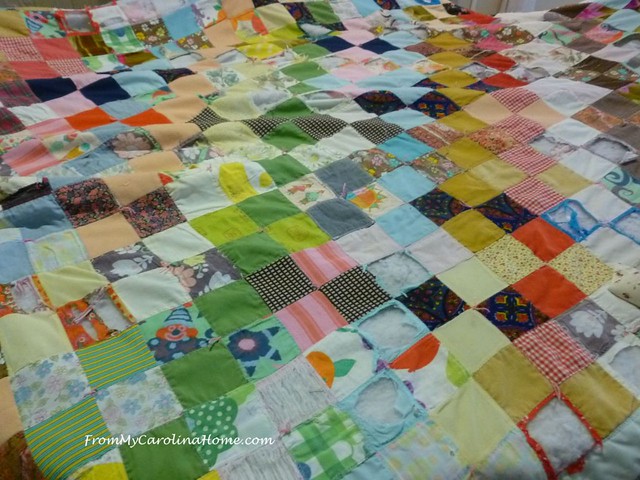 In some cases, the patches were just gone, like these blue ones, while others are barely hanging on, like these pinker ones on the left.  All of these would need to be covered with new ones.  Some of the batting was gone in spots, and bunched up in others. 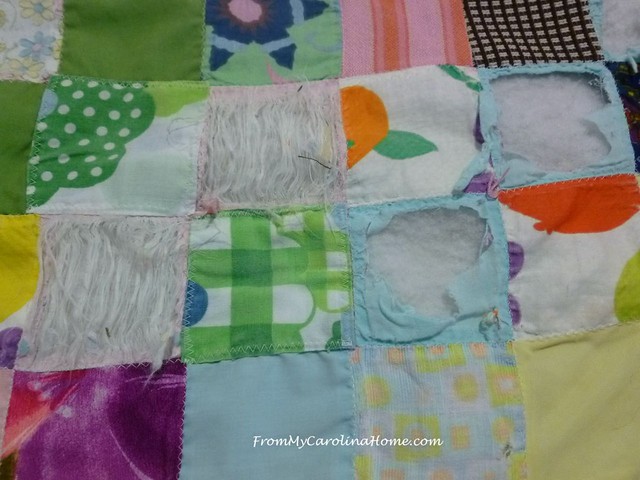 I put the quilt on my table in the basement so I could leave it out.  First I had to buy some fabric with appropriate colors to blend into the existing quilt colors.  Luckily I did this prior to the lockdown the first week of March.  After the lockdown began, I made a goal of working on it 30 minutes a day, to plod along and get it done.  Some days I met the goal, and some days I just needed to take a break from it.  Many times over the next 8 weeks, I regretted even agreeing to fix this one.  One thing I know, it is the last one this badly damaged that I will ever agree to do in the future. 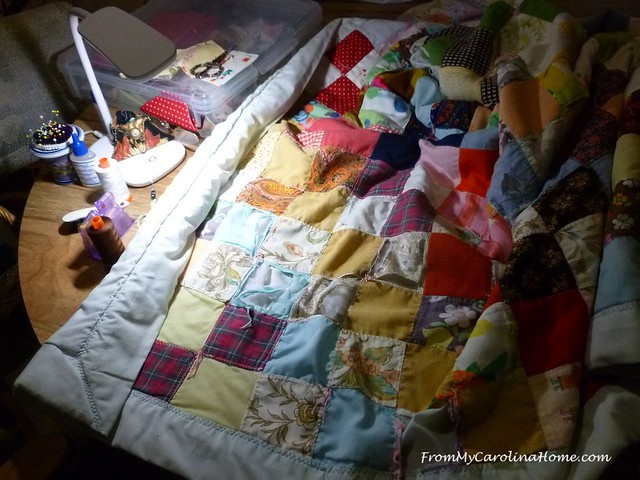 So, here is how I did it.  When two patches were next to each other, I sewed the patches together first. 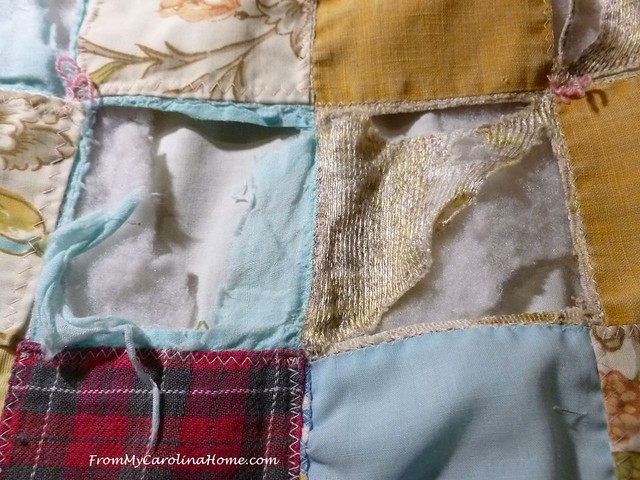 Then, I pinned them in place, turning the edges under, and whip stitched by hand. 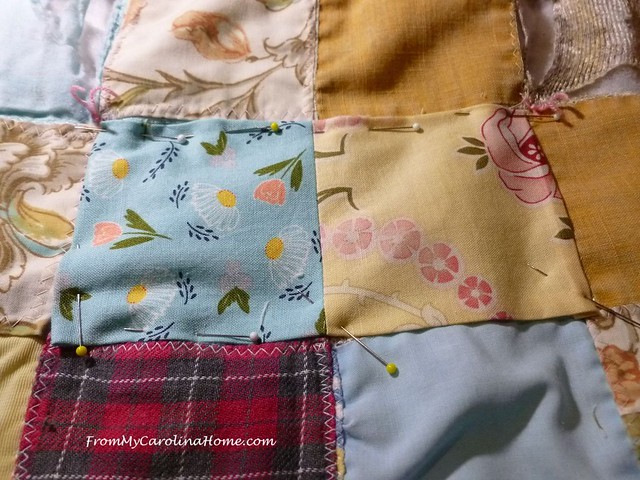 In some spots, four patches were together needing replacement.  On this patch, I had to add a bit of batting as well as that was gone in this section too. 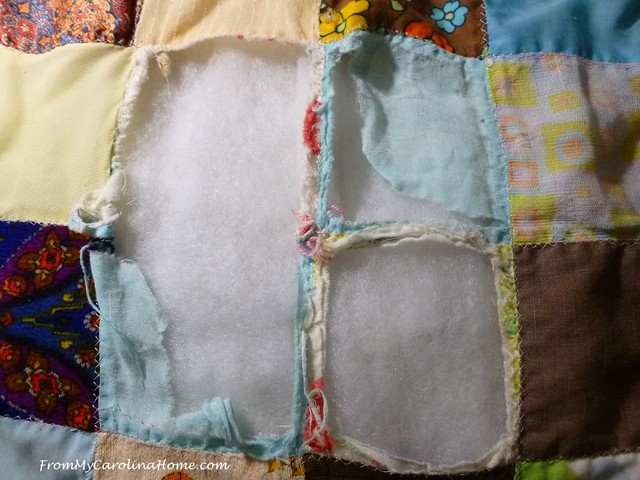 I made a four patch, turning the edges under and pinned in place. 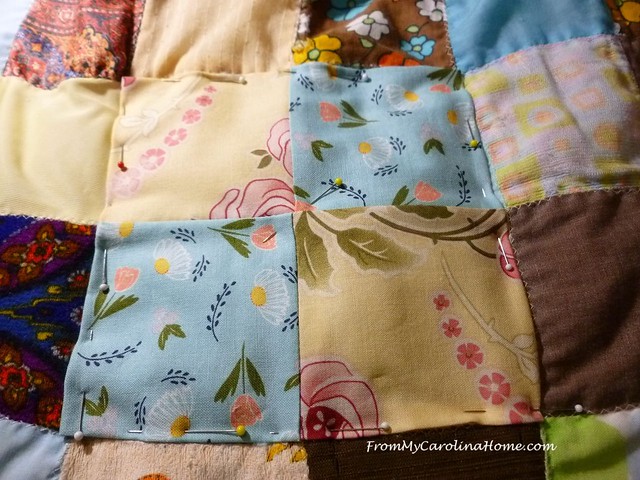 After hand stitching, the damage was covered.  A few stitches in the ditch in the middle caught the bit of batting to hold it in place. 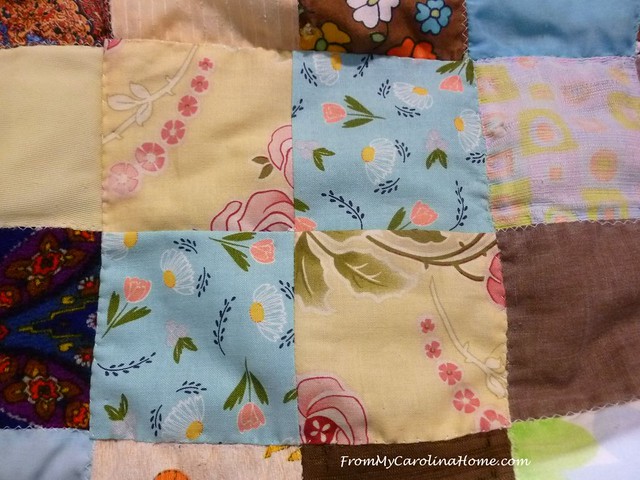 Some patches had small tears that could be stabilized from underneath, stitched down and treated to preserve the original patches. 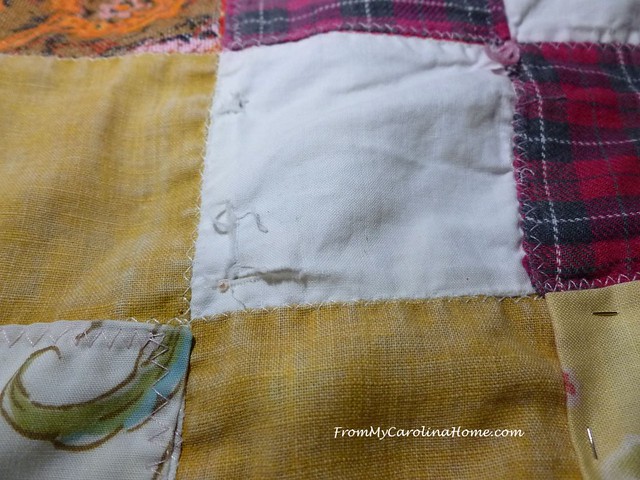 Looking at the overall quilt, it is constructed with four-patches, so I tried to keep that consistency in design in the cover patches.  I chose the colors to use by what I was covering up. 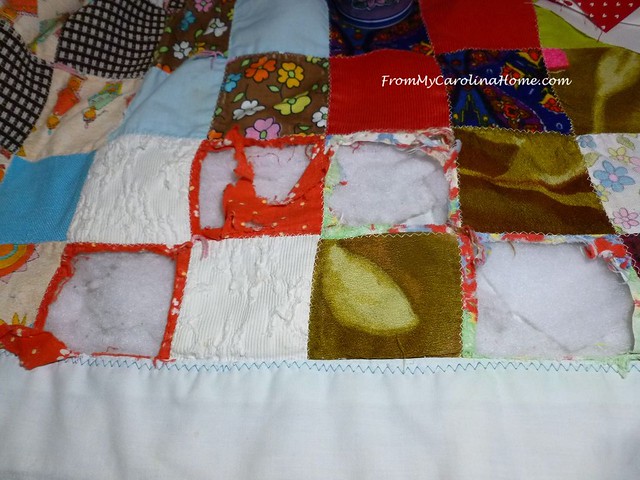 Red patches for the left two and predominately white ones for the right two were chosen for this group. 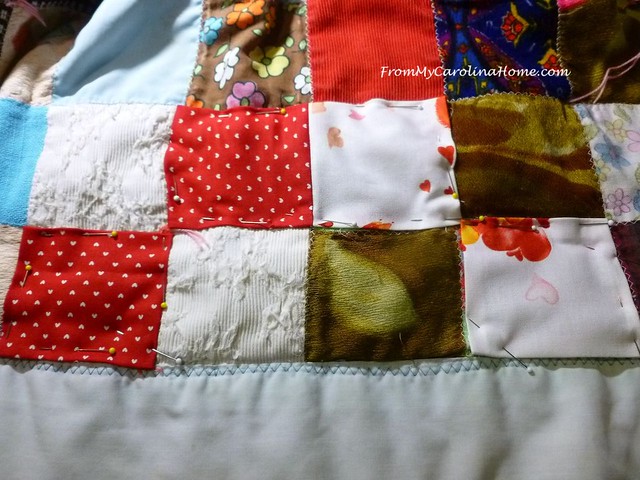 After stitching, the patches blend nicely with the surrounding colors. 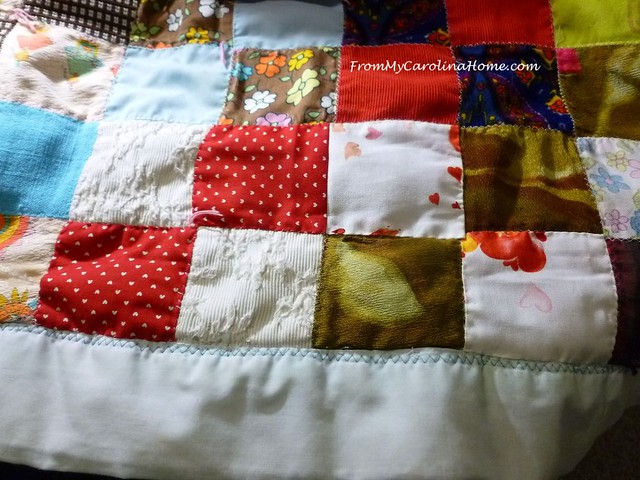 A few more to do. 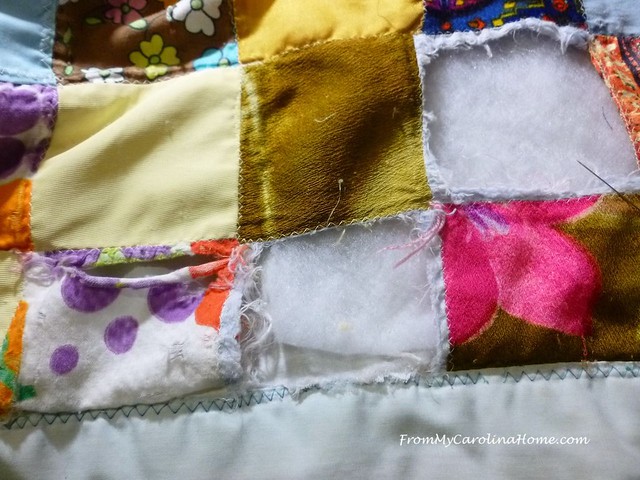 Cover and pin then stitch. Repeat.  And repeat. 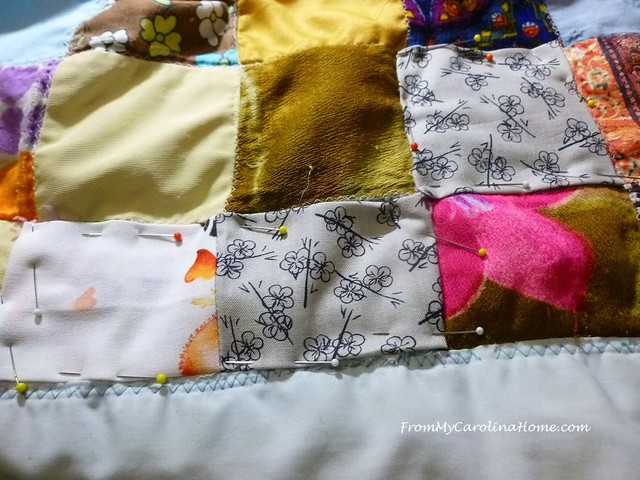 On this one, the white on the lower left would be coming apart very soon.  To keep with the four patch design, I went ahead and covered all four. 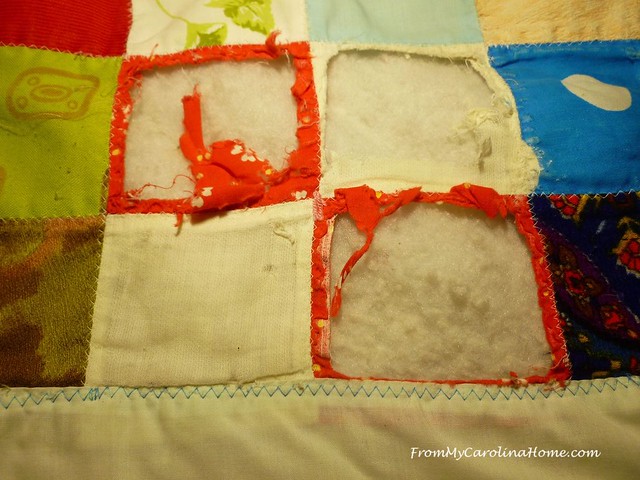 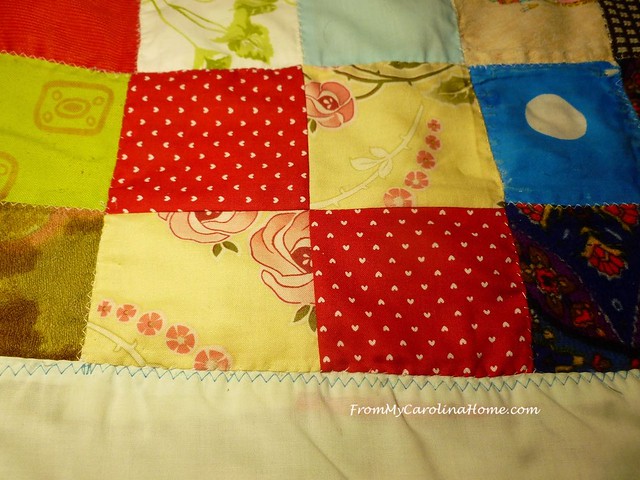 By using the same red print everywhere red was needed, it made the repair integrate into the whole and be less noticeable. 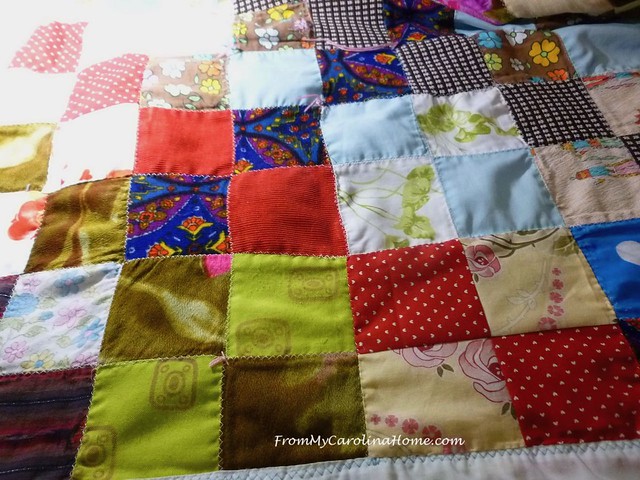 More and more to do.  I covered a total of 86 patches with new ones. 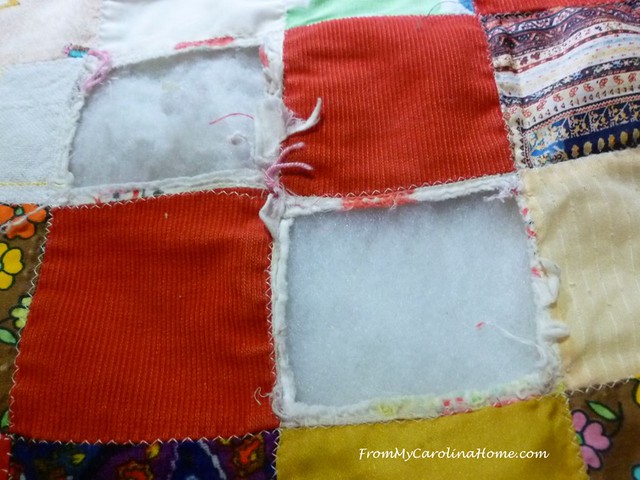 Pinning and sewing, a few a day, I kept going until it was finally all done. 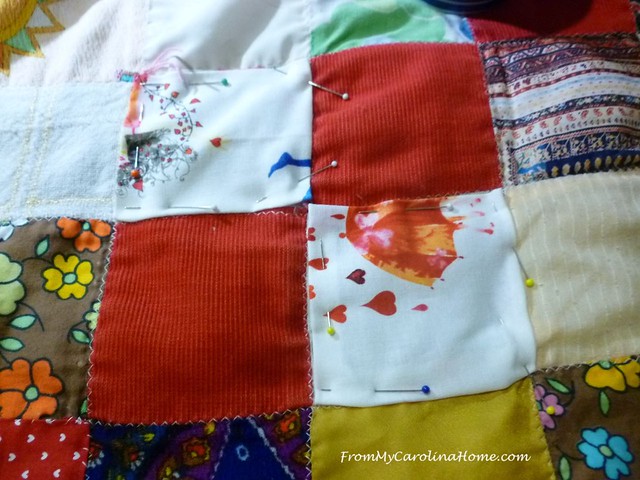 I fixed a number of small tears in other patches trying to preserve as many original patches as possible.  There was a tear on the back that needed repair as well.  But, finally, it was all done. 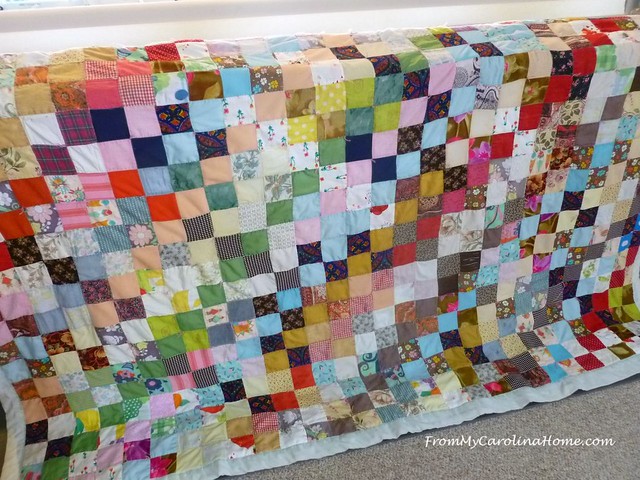 I hope the owner is pleased.  It will be boxed up and shipped back soon. 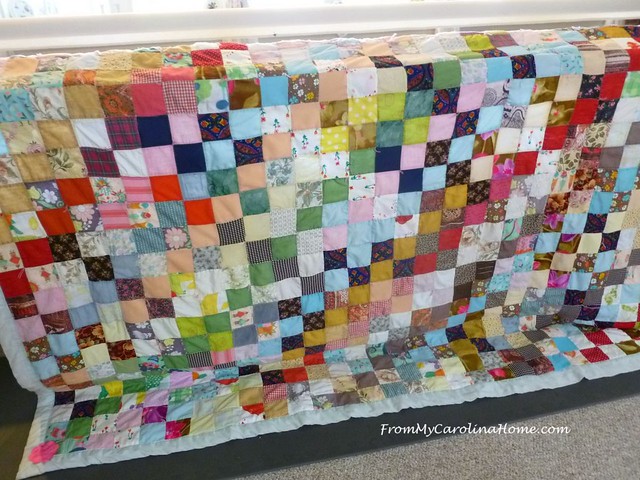 And I am done with repairs that need this much hand work!  But I am pleased with the way it turned out.

What are you working on now?

55 thoughts on “Quilt Repair by Hand”