So much has begun to bloom in the past two weeks since my last gardening post, it is becoming a wonderland of color around here.  If we must be stuck at home, at least we have beautiful flowers to enjoy.  Some very chilly nights this past week kept me from getting a lot of planting done, though.  We have several colors of azaleas, and this year the white ones are pristine and lovely! 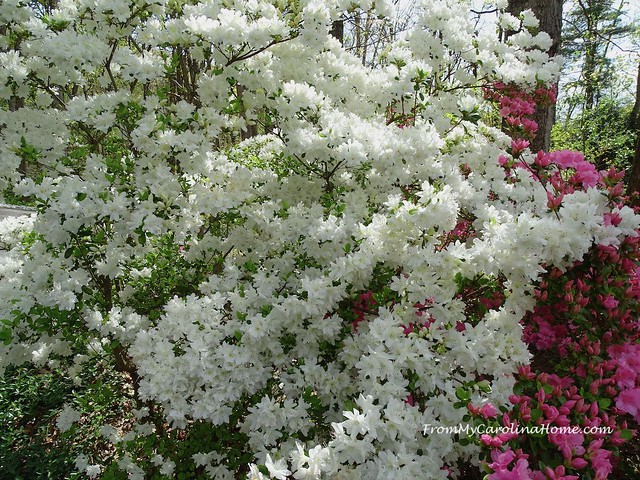 Many years the white ones suffer frost damage, but this year they bloomed without any damage for several days before getting some light frost browning. 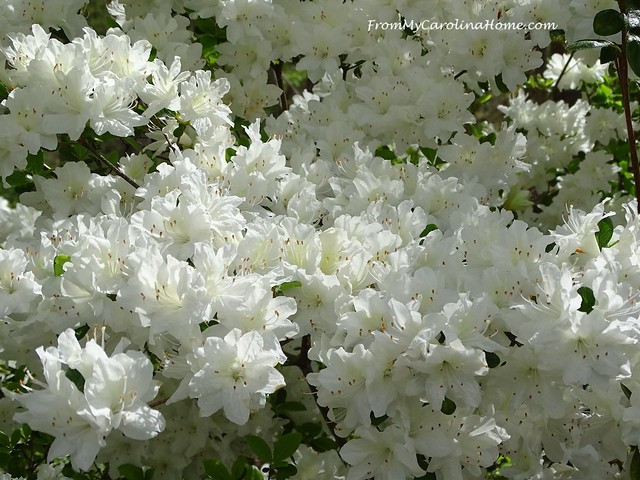 Dark pink and lighter pinks are around the circle. 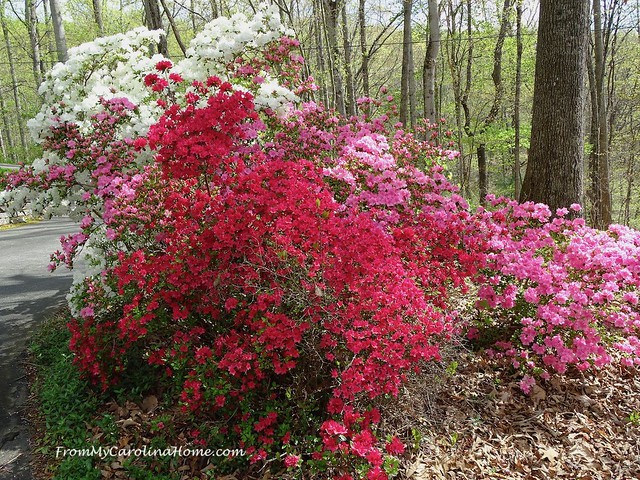 I like this medium pink the best among the pink ones. 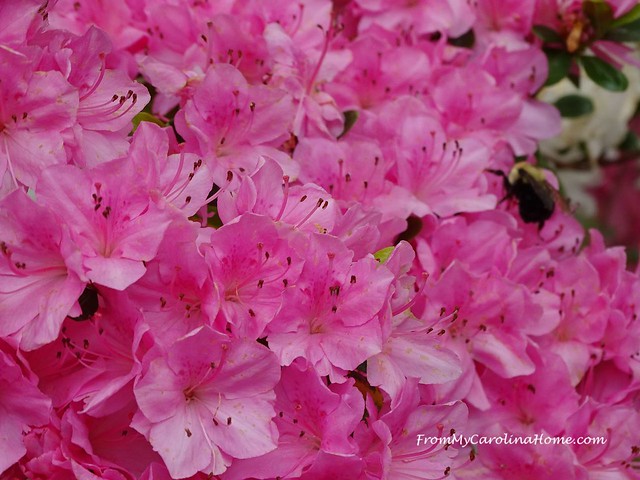 Pink, white and coral azaleas bloom all the way down the drive along our property. 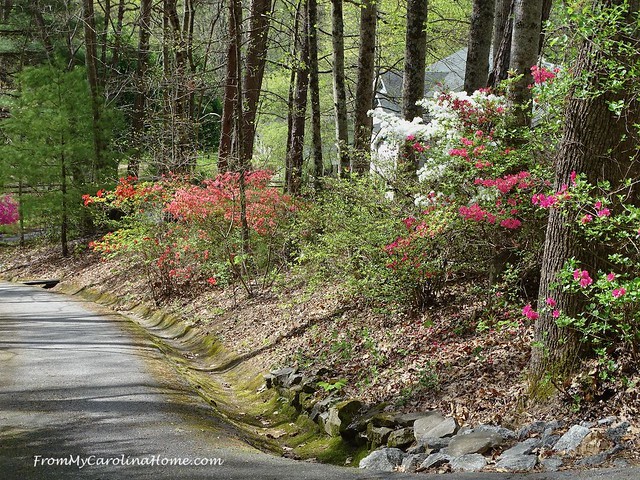 A few days ago, George made an appearance.  He was gobbling loud enough to be heard inside the house, so I stepped out to the veranda to see if it was him. 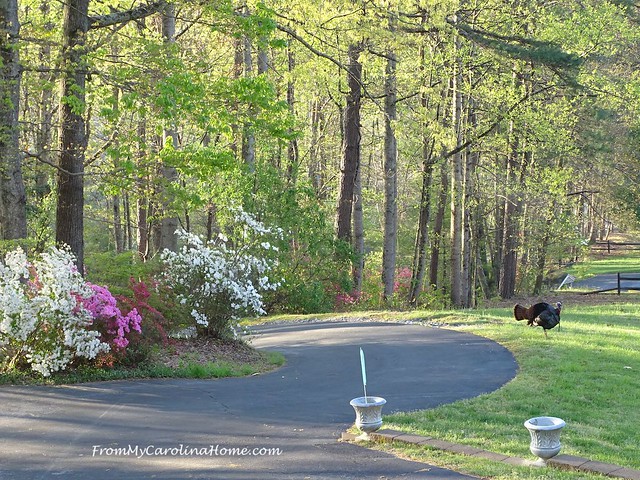 It indeed was George, I recognize the long beard which shows he is a mature bird.  He was strutting his stuff, but no lady turkeys were answering the call. 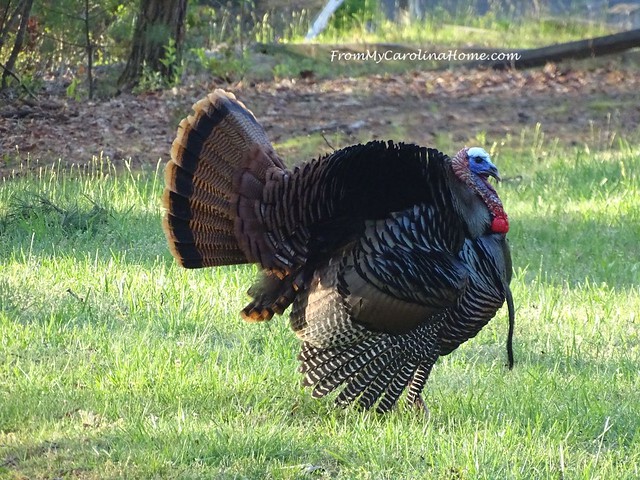 Oliver is still making almost daily visits as well.  I gave him a small carrot one day, and he turned up his nose at it.   I was surprised as I thought squirrels liked all kinds of vegetables.  Researching it, they are supposed to like a wide variety of foods including all types of veggies, but our little thief has a thing for carbs.  He’ll eat fruit and grains, and My Sweet Babboo gave him a few peanuts last week.  But he will snatch up any kind of bread in a hurry. This day he got some raisin bread. 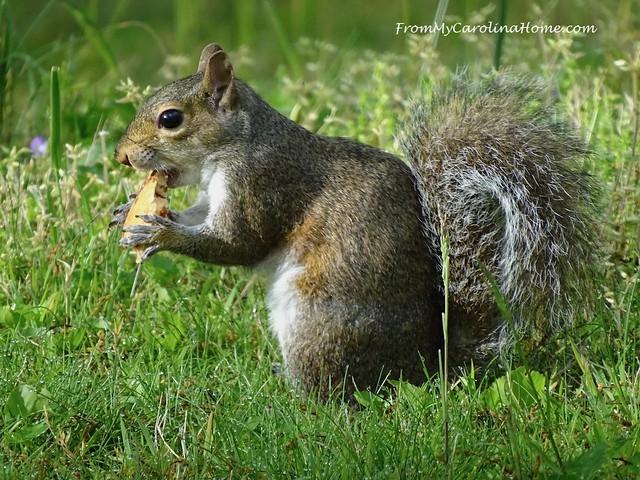 The first of the early irises began their blooming.  I have two beds of these.  This year all the iris seem like they are going to be more prolific. 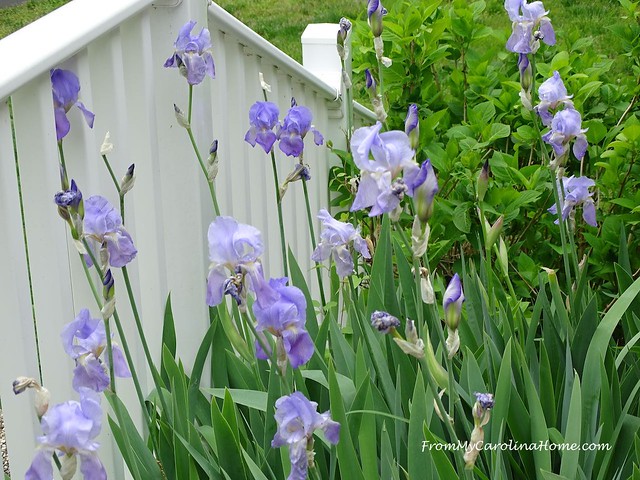 The first of the burgundy and yellow ones bloomed.  There are a lot of buds on those, so I expect a bunch more in the days to come. 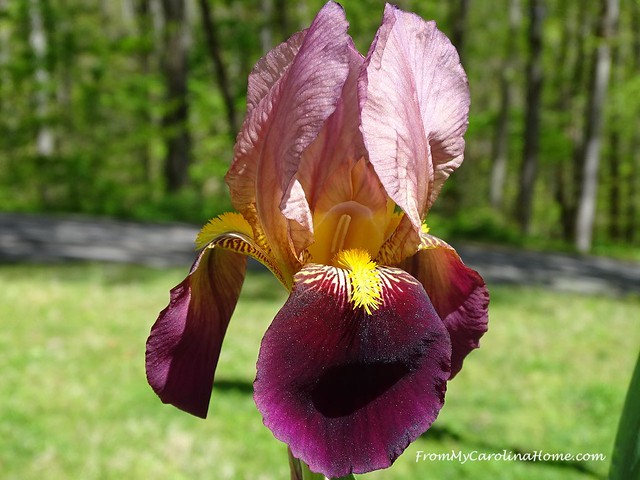 I do adore white flowers, and the white irises are particularly lovely this year.  There are 19 white blooms and buds in this bed! 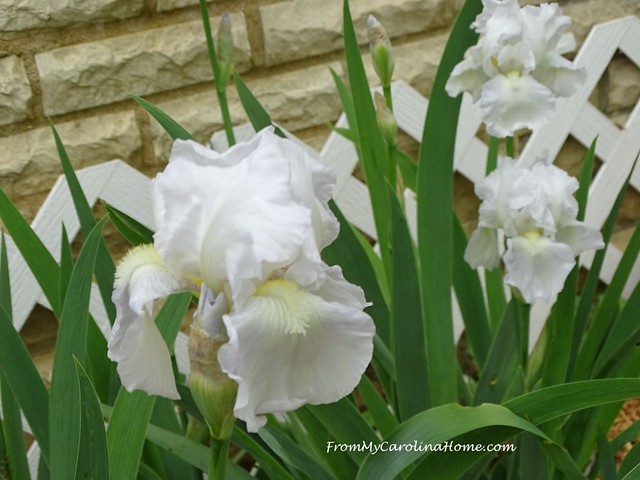 Beautiful pure white with delicate beards, they seem to glow in the sunlight. 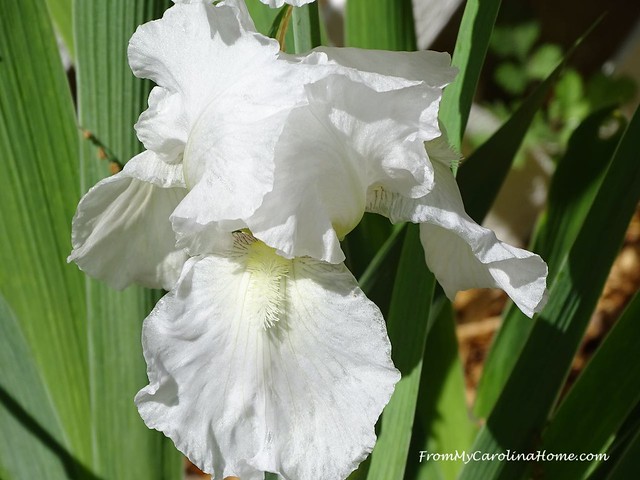 I did get a few tomatoes put into pots, but a late week frost then the threat of a thunderstorm with high winds kept me from putting these into the ground.  I kept the geraniums on the sun porch too, so they wouldn’t be damaged by the wind.   Two geranium stems are in a vase of water, and are rooting nicely. 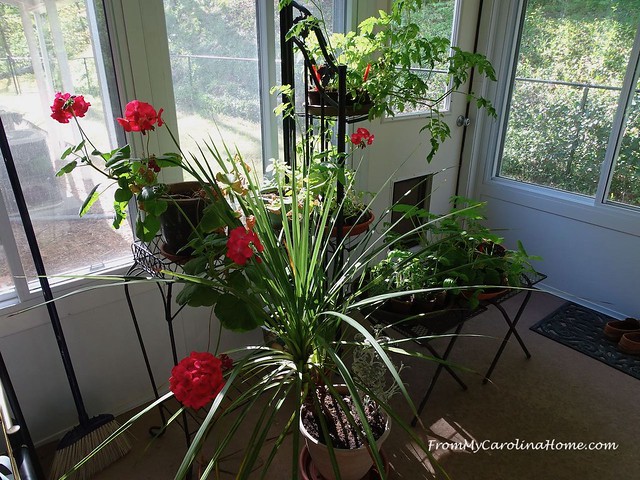 Then we had another visitor.  This little cub was interested in the birdseed, but he cannot climb the pole and the feeder is too far off the ground for him to reach. 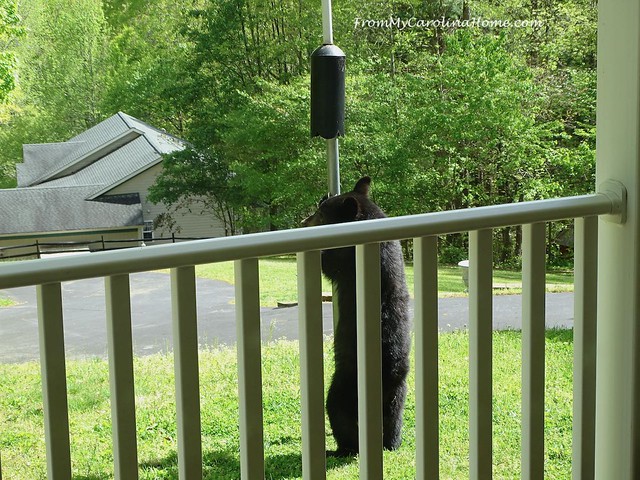 I scared him, and he ran down to the hostas, turned around and froze in this position.  He isn’t coming toward me, just looking at me as I took his picture.  He is pretty young, but still is about 100 pounds.  He (she?) has such a cute face with bright and curious eyes. 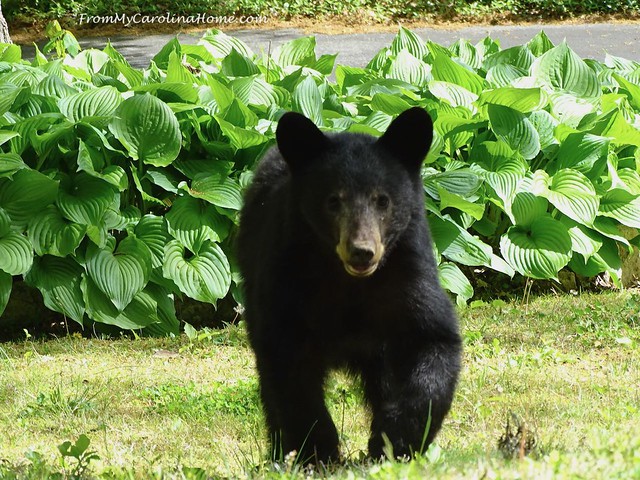 He moved off towards the east cove, taking one last curious look before going into the woods.  I wondered where his mother was.  She didn’t make an appearance, but I am sure she was close by.  It is spring in the mountains, one must be alert while outside. 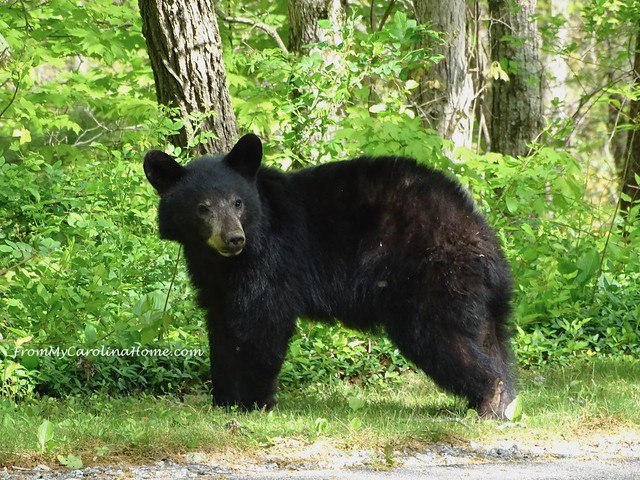 Checking on the peaches, it seems that there will be some this year.  We will see who gets them first, LOL!! 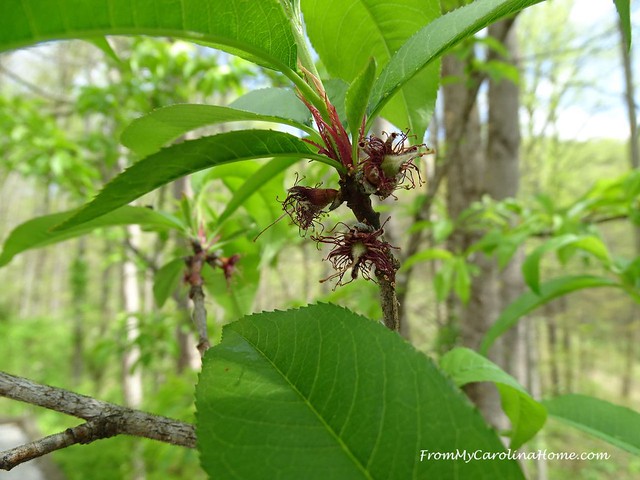 On the island flower bed near the azaleas, I am thrilled to show the lady slippers have come up.  Last year I only had one, this year there are two.  These are members of the orchid family that only grow wild. 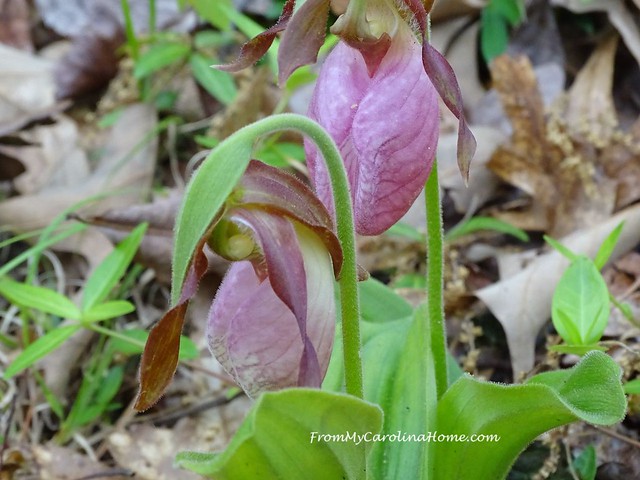 These take such a delicate mix of just the right conditions to grow.  They need a symbiotic relationship with a particular beneficial soil fungus to germinate, specific requirements for light and water, and bees for pollination.   They cannot be moved or cultivated.  I feel like a fairy has touched the ground here, and granted us a rare and precious gift. 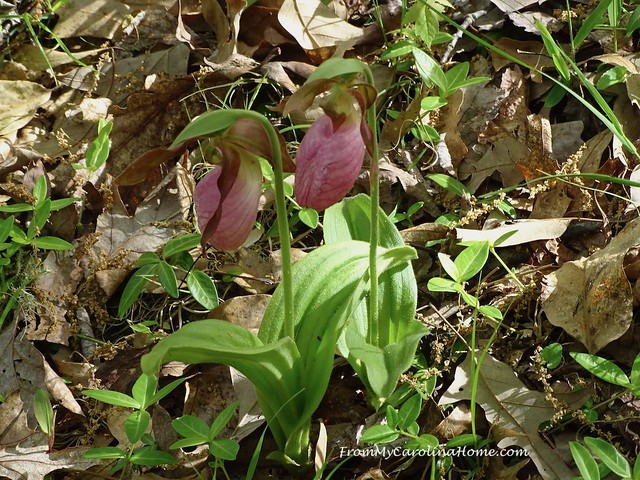 31 thoughts on “Late April in the Garden”