Three days of sewing with friends, what could be more fun?  I could have really used the time to get farther along on the Scrap Dance Minuet Mystery Quilt Along, but Step 2 hasn’t been posted yet (coming next Friday), and I didn’t want to give any sneak peeks, LOL!!   So, I took a bunch of other projects and made some great progress. I was fortunate to sit next to a sweet friend, Madeline, whom I do not get to see very often. She had her Featherweight to sew on, and I took my little Janome Gem. Each person had one eight-foot table to themselves, plenty of room to spread out and sew.  It was a day retreat, where you can leave your machine and all your stuff set up, sew all day, then go home to eat dinner and sleep, then come back the next day. 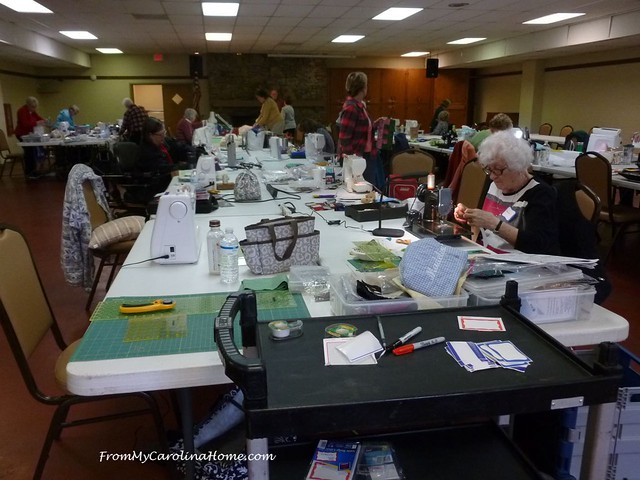 On the side, a classroom was set up for two pattern classes, one on Tuesday and one on Wednesday. Friends Sandy and Carolyn (in the front row) love to take the classes to make a new pattern. 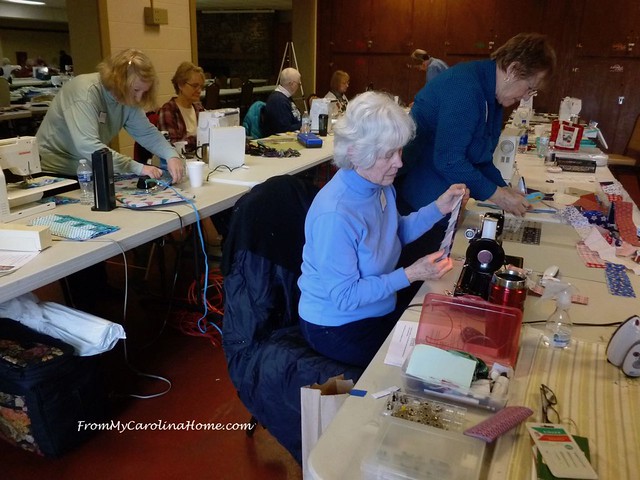 OK, so getting down to work, I began with the blocks for the Carolina Hurricane Quilt Project. I still have enough left to do two more tops, and this is after the five queens, two full and one twin already done.  I sewed mountain peaks, making seven to a row, and six rows. 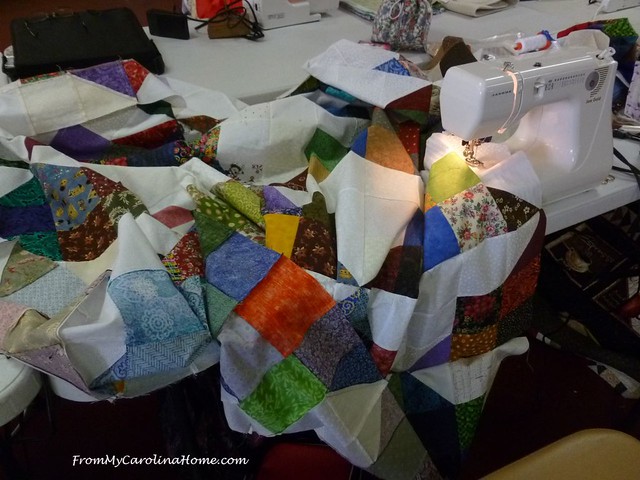 Before lunch, I had a top done. 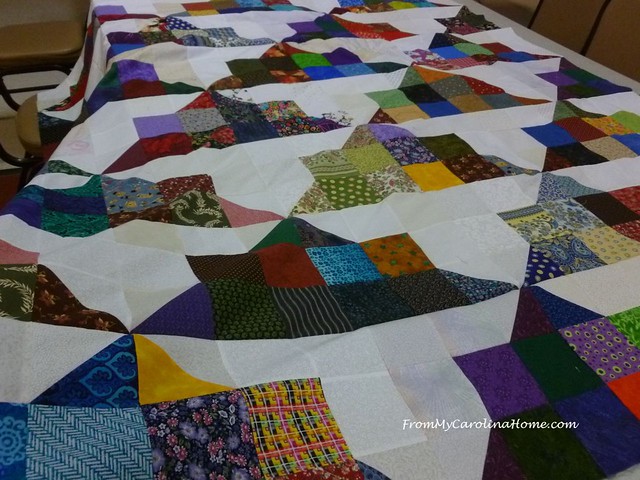 I got busy on the next project, a Quilt of Valor.  I had no plan, just a bunch of things I could use.  So, I began with jelly roll strips, sewing reds and blues to beige lights. 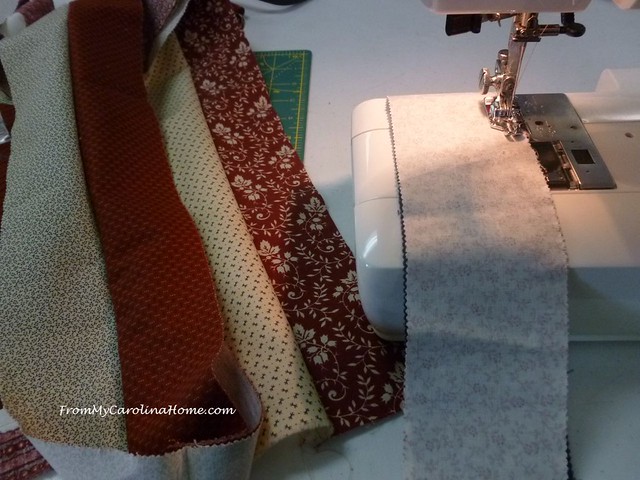 I crosscut all the two-strip units, and sewed a red unit to a blue one to make four-patches.  I counted 48, enough for 12 blocks if I use four to a block. 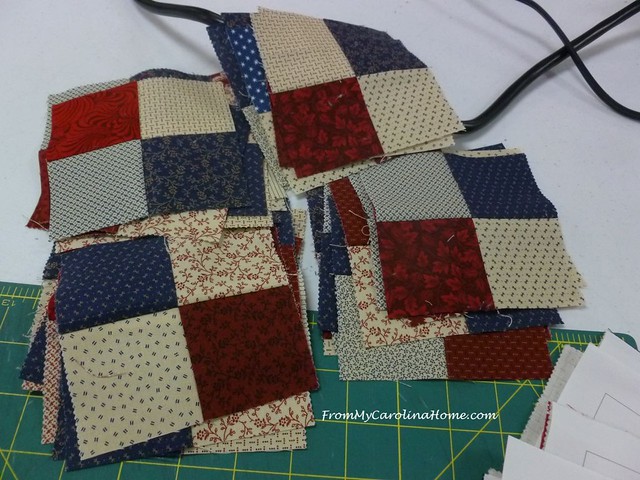 I had some layer cake fabrics, and I used the Moda Cake Mix papers set #3 to make some HSTs.  Actually a lot of HSTs in just a short time!! 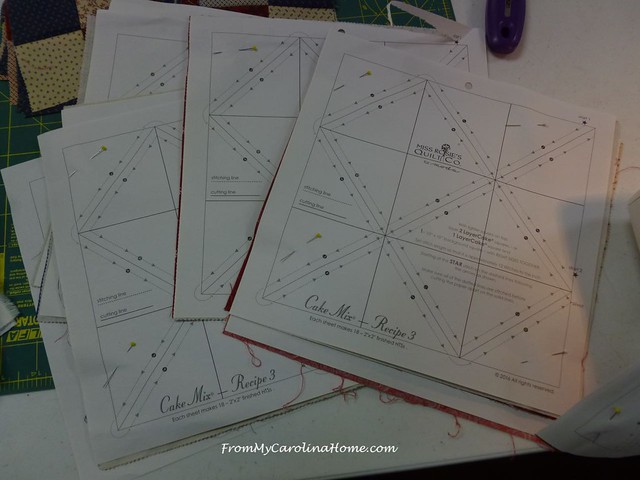 Sewing goes fast and these make 18 per page. 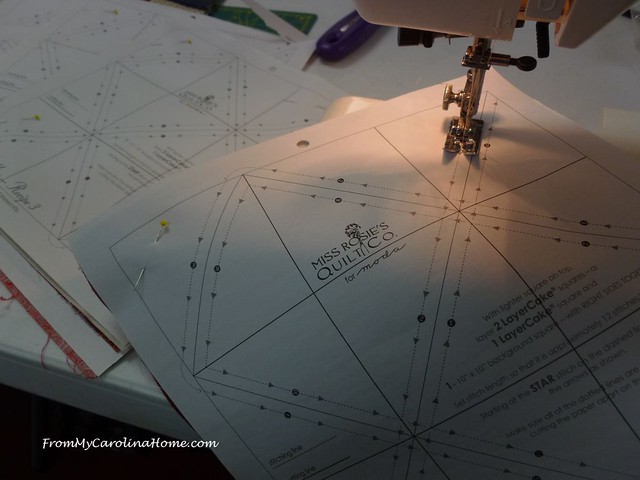 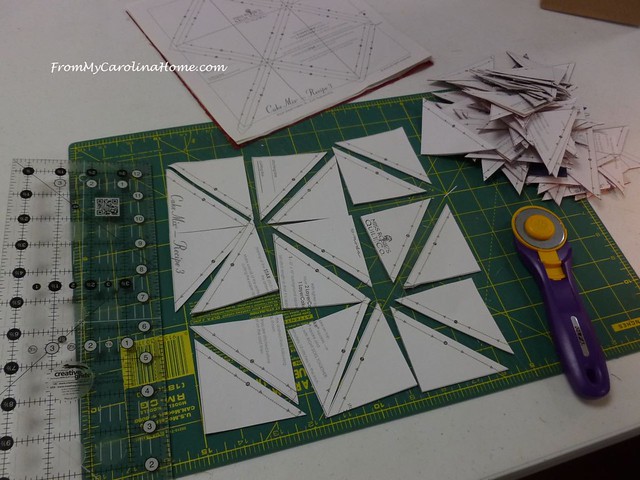 By the end of the day, I had finished taking all the papers off and pressed the seams to the dark side. 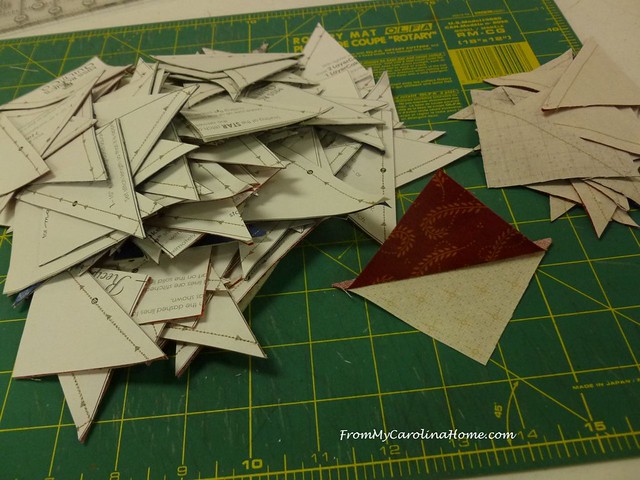 Day two had most of us getting there early, and machines were humming. 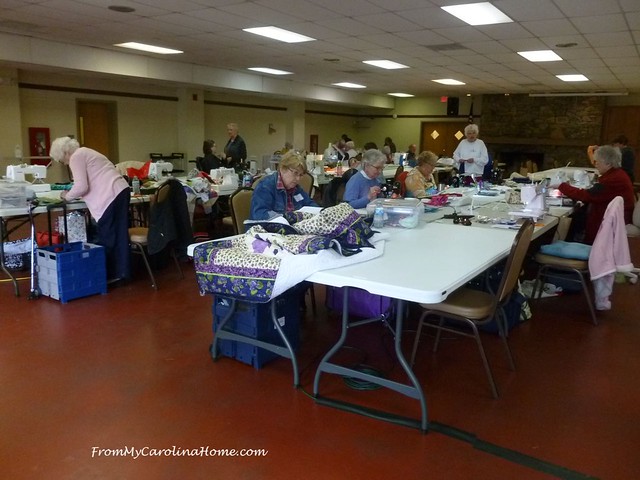 I began the day with putting the half square triangles into flying geese, with a red and blue on each one. 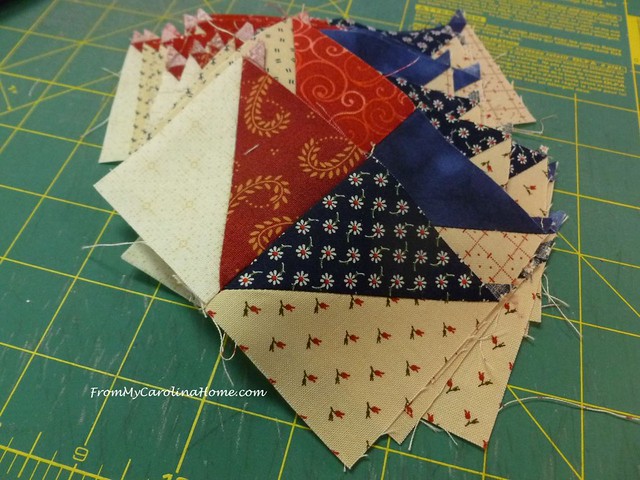 Some of the triangles had a lighter background that didn’t work with the four-patches that well.  So, I picked out 48 that went together and made a square in a square for the center of the block.  I did have to make a few more HSTs to have enough blue-beige combinations to get the centers consistent. 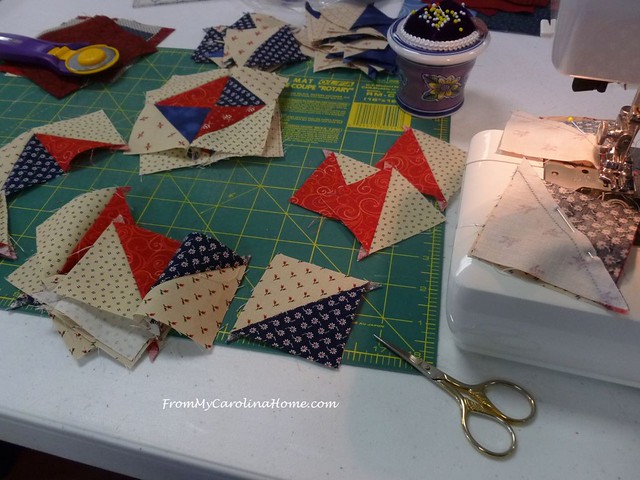 Using some 4-1/2-inch squares I brought with me, I auditioned several designs but I didn’t take pictures of all those.  Here is the final design, with red patches and orienting the dark blue on the four-patch units to the center. 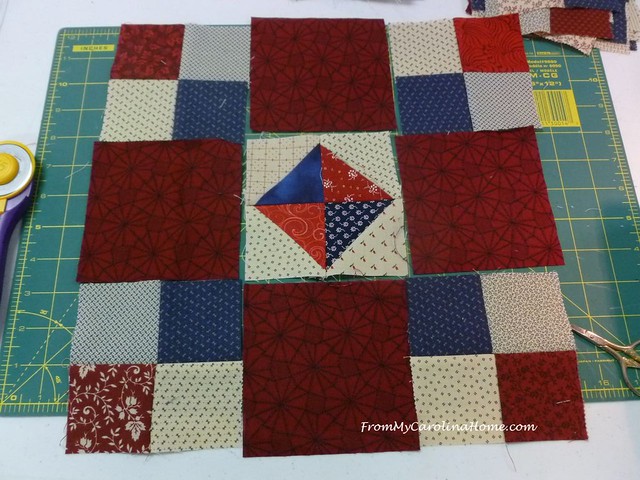 I did it the opposite way for the blue patches, orienting the red on the four-patch units to the center. 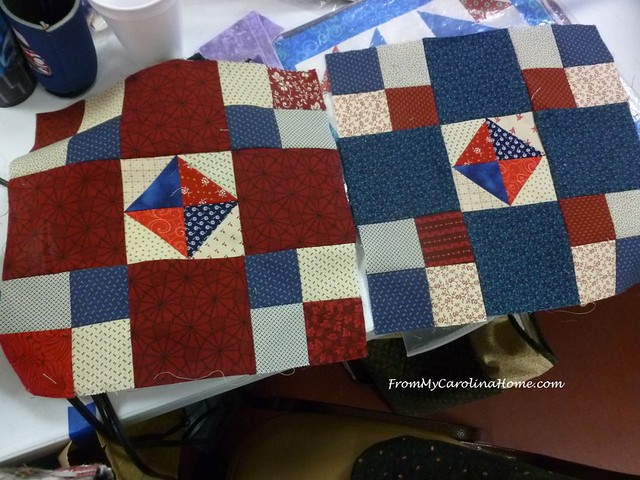 I had to go walk around a bit and chat some more.  Here, Carol Preston is laying out her class project on a design board. 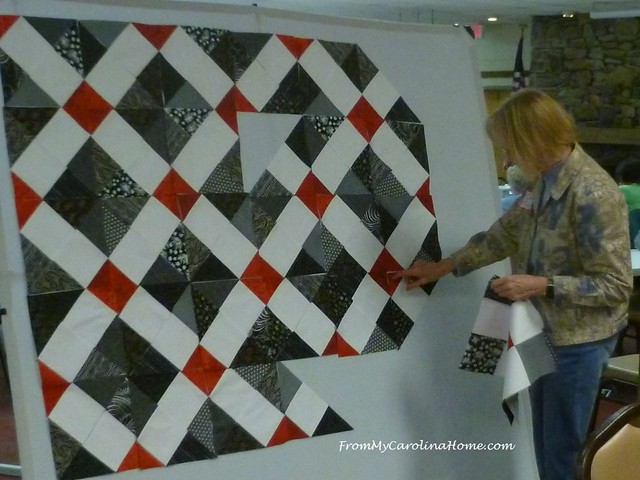 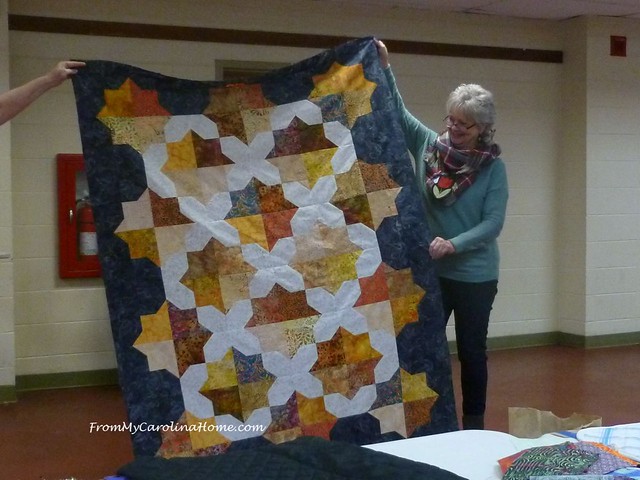 I got back to sewing, and made 10 blocks before the end of the day.  On the morning of Day Three, I had to make a few more four-patches as I guess I miscounted, plus I sewed one backwards and had to rip it out and do it again, so it took a bit longer.  By the end of the morning, I finished off the 12 blocks, throwing in a few with a medium blue just for interest.   Of course, there was a fair bit of time walking around and chatting that morning too. 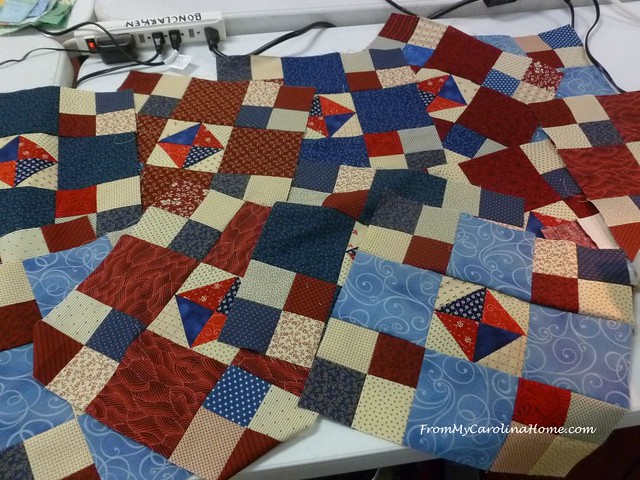 After lunch I started work on the last blocks I have for the last hurricane quilt I will make.  These were all cut down to 12 inches to accommodate a large group that did not come out at 12-1/2 inches.  There were some at 12, some at 12-1/4 and some at 12-1/2.  In order to use them all, they had to be the same size, so they were all squared up at 12 inches.  This gave me 43 blocks to use.  I used 42 and gave one block away.  Once again, I sewed most of them in pairs to make dark points, with an extra on the right hand edge of all the rows. 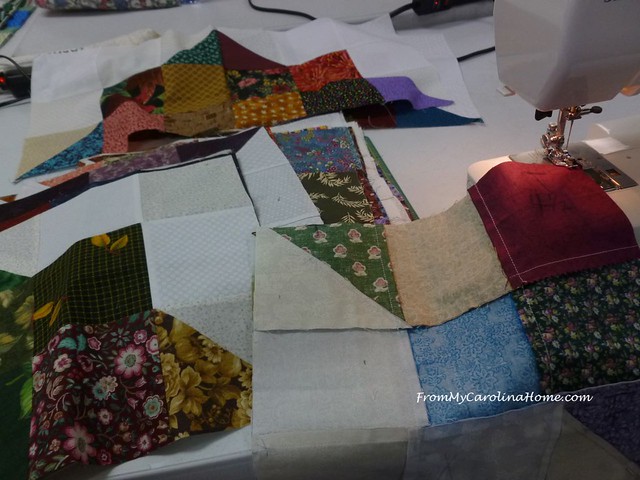 Laying out the rows, I rotated the even number rows to create the zigzag pattern.  Two blocks that had mostly purple ended up next to each other, so I changed the rows around a bit to distribute the colors as best as I could. 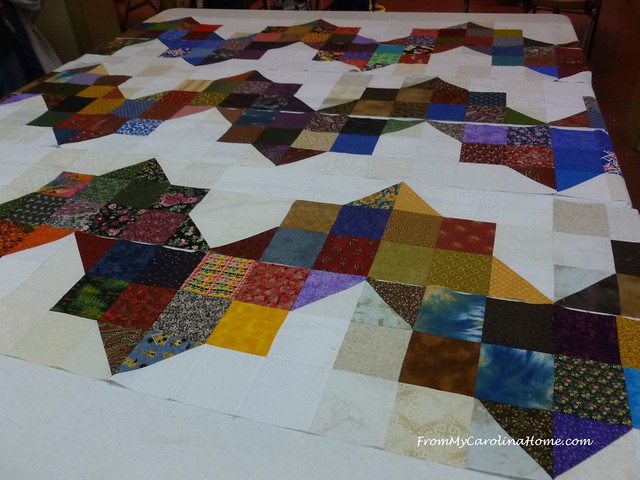 Rearranged and then pinned in three sets of two rows, it was then end of the day so I took this one home to finish. 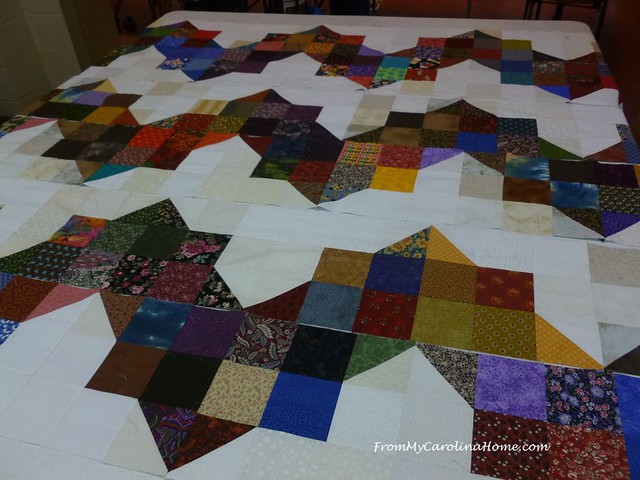 I always get so much done at retreat. Given the amount of time I spend talking and looking at what every one else is doing, it is amazing that I get anything done, LOL!! I came home with one completed top for the hurricane project, 12 blocks done for my next QOV, and the rows pinned for a second hurricane quilt. Plus I made some new friends, and got a new customer too!! Time well spent, and I cannot wait for the next one in October!

Have you done a retreat?

Moda Cake Mix Papers Set #3 on Amazon a great deal if you are a Prime member.

24 thoughts on “Fun at Quilt Retreat”