Slow cookers are marvelous for making moist and tender roasts.  I’ve made pork roast a lot, and have a number of recipes on the blog for using up the leftovers.  This time I had an idea for a gluten free gravy for it, so I tried it.  DH approved, going back for seconds!!  The cut I use most is the Boston butt, which is actually the shoulder, because it holds up very well to long cooking. 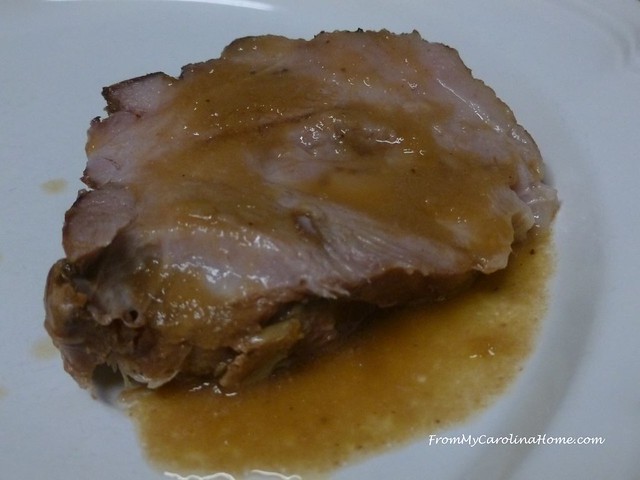 Begin with spraying the crock with cooking spray to keep the vegetables from sticking. Then cut a very thick slice of onion, about one inch, and break into rings. Scatter those in the bottom of the pot. Add a couple of garlic cloves, peeled and roughly smashed.  Add about 1/4 cup of water, just to cover the bottom of the crock under the onions.  Don’t worry, pork has a lot of water that will come out during cooking. 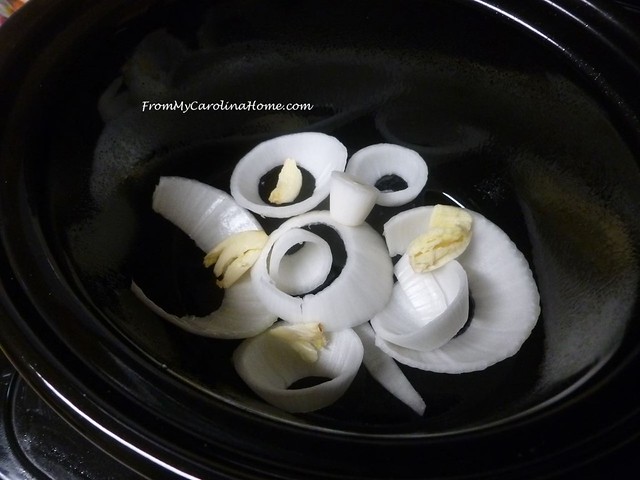 Set a 3-5 pound pork roast on top of the onions and garlic, sprinkle with your favorite seasonings.  I used lemon pepper. 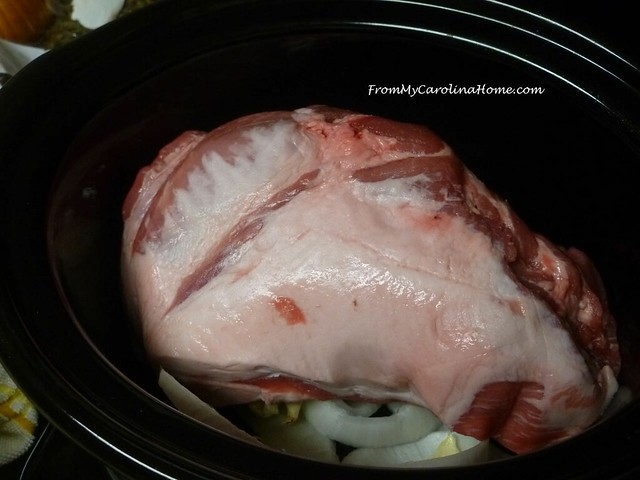 For this recipe, I used my smaller 4-quart Hamilton Beach Progammable slow cooker with the oval crock.  Setting the cooker on low, I selected six hours.  After that time, it will automatically reset to ‘warm’. 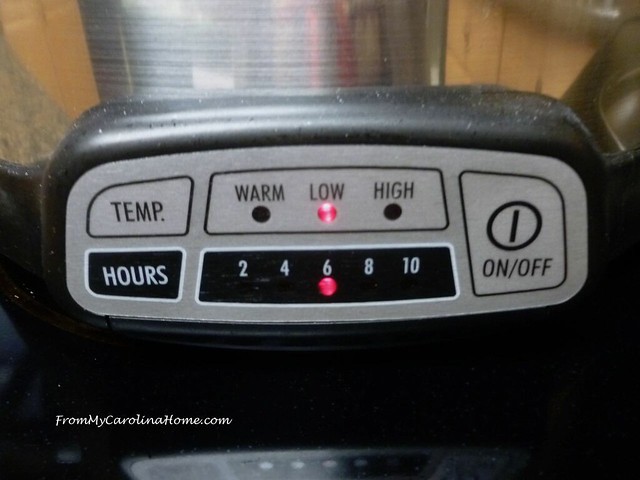 At the end of a good sewing day, a juicy and deliciously tender pork roast is waiting. 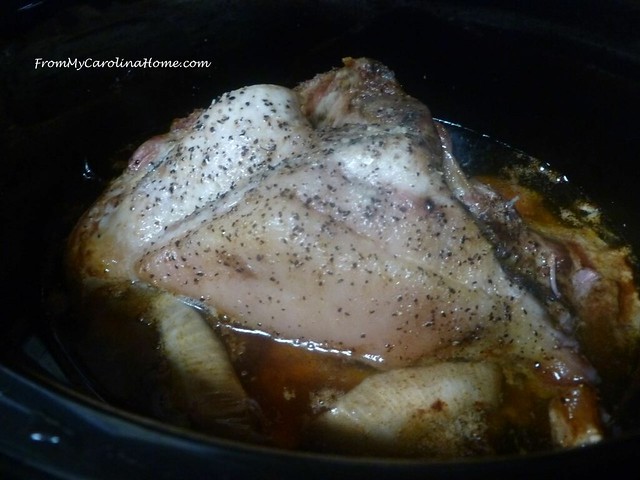 Now for the magic.  Take the roast out carefully and set on a plate to rest.  Tent with foil to keep it warm.  Using tongs, pull out the big pieces of onion and garlic, and place them in a blender (or food processor). 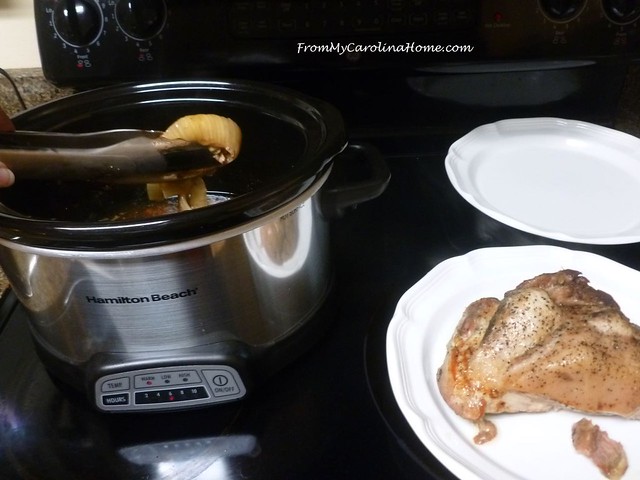 Then, pour the remaining liquid in a fat separator.  See how the fat rises to the top?  It may take more than one time to get all the liquid done.  I have a glass fat separator as well, but it seems fragile, and this plastic one is unbreakable. 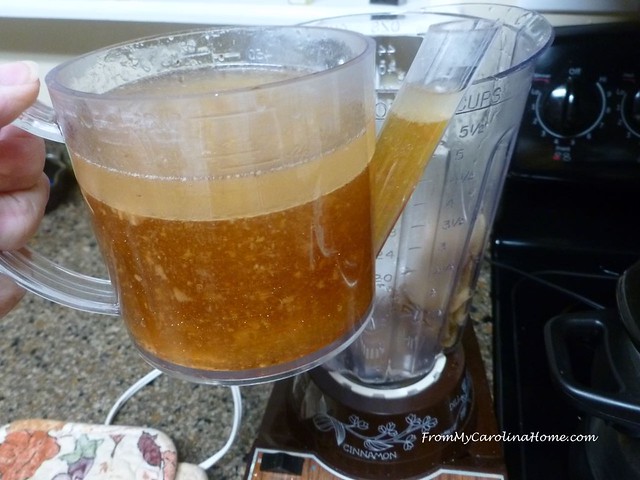 Pour the juice into the blender, stopping before you get to the fat.  Refill and keep going until all the liquid is separated.  Discard the fat. 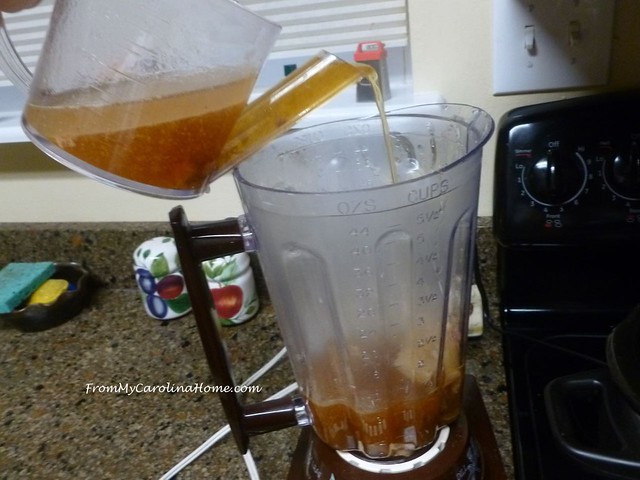 Blend on a high speed until smooth. 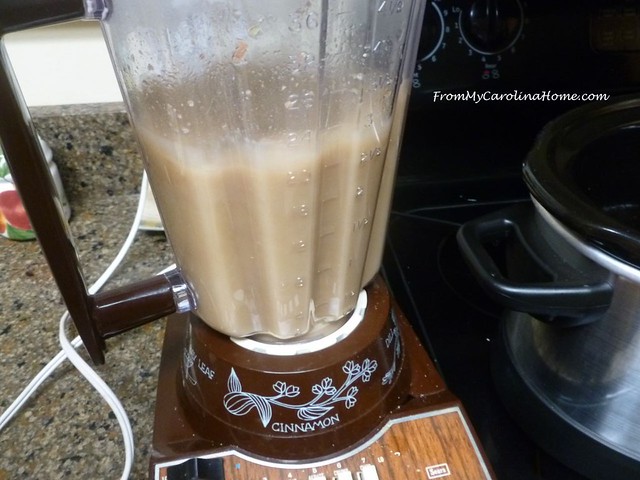 Pour into a saucepan, and bring to a boil.  Cook for 5-7 minutes, stirring often, to thicken the gravy.  The longer it is boiled, the thicker it will get.  The liquid evaporates and the solids that were blended in create the sauce. 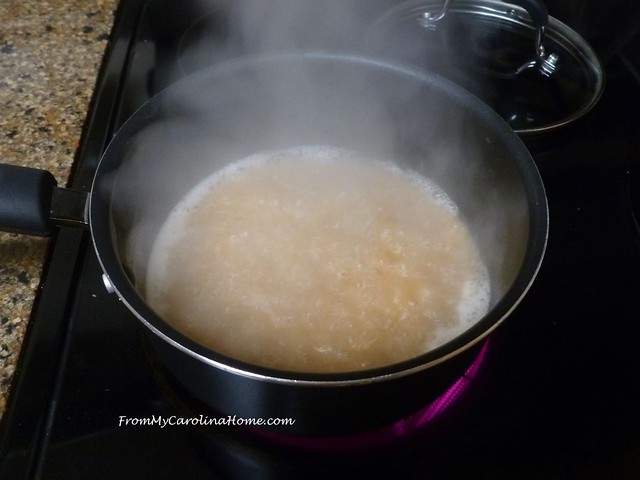 Serve!  Tender pork roast with a flavorful, reduced-fat, gluten-free gravy without flour is ready to eat. 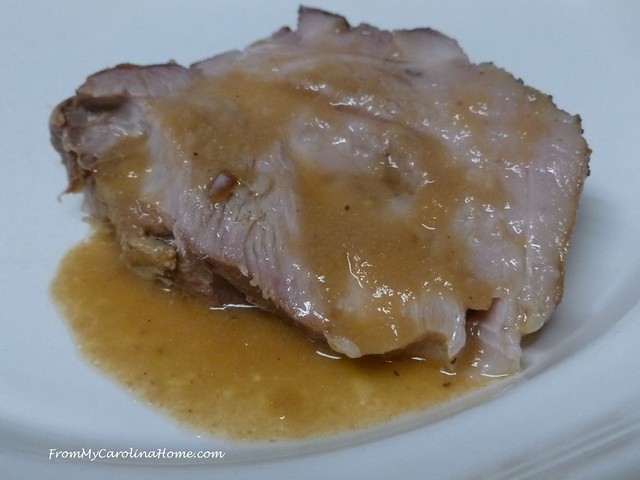 If you like other veggies like celery or carrots, throw some of those in the pot too, it won’t matter.  I served this with a potato to soak up more of the gravy.  You could use mashed potatoes, rice or noodles as well. 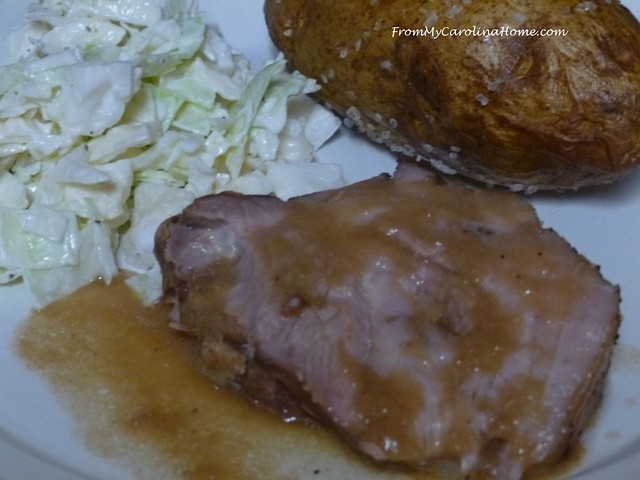 The best thing is, no recipe is really needed.  Just make the veggies big and chunky so they are easy to pick up after cooking to put in the blender.   Store the gravy separate from the meat, and you can use it as liquid in some of these recipes for leftovers.   Try the Leftover Pork Roast Enchiladas.

What’s in your slow cooker on a cold day? 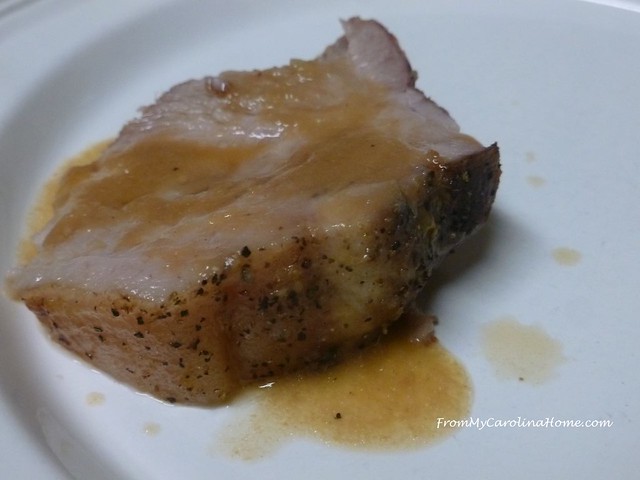 Amazon affiliate links – 4-quart Hamilton Beach Progammable slow cooker and
fat separator.  Thank you for using my links when you can.