Last weekend we made a quick trip to Florida for the Daytona Historic Races, giving us a chance to visit our friends there too.  We all went to the track together for the Saturday races, arriving as this group of racers was on the track.  Mustangs and Porsches raced alongside other cars of similar vintage.  These are not street cars, but full race cars trimmed for racing with engine upgrades, transmission and brake upgrades, roll cages and special safety equipment. 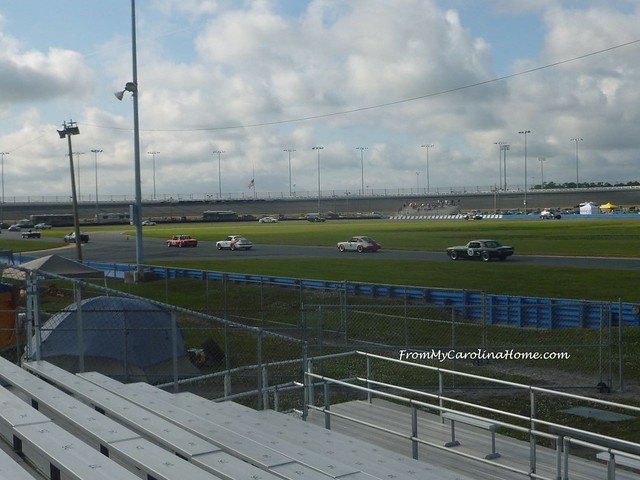 The races go on for three days, with this last 24 hours having each group running four races of one hour each about six hours apart.  They race twice in daylight and twice in the dark, with the total scoring for all four determining the winners.  The classes are grouped by age of the car.  Here you can see the white car on the closest part of the track to the stands we were in, then the other part of the turn behind, and several cars up on the banked part of the track in the background. 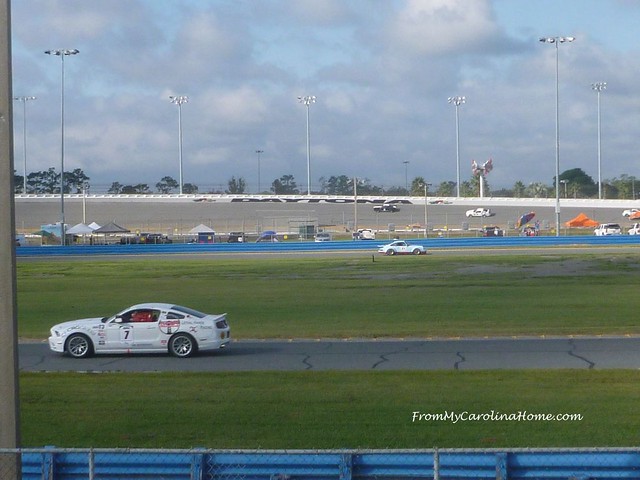 There was a Cars and Coffee mini-show in the infield, with the registrants getting some time on the track for a few touring laps at lunchtime.  The 50’s era Corvette was in a pretty teal color, just looks like Florida doesn’t it?  All sorts of cars were there, like the modern maroon Cadillac, next to the vintage blue Porsche. 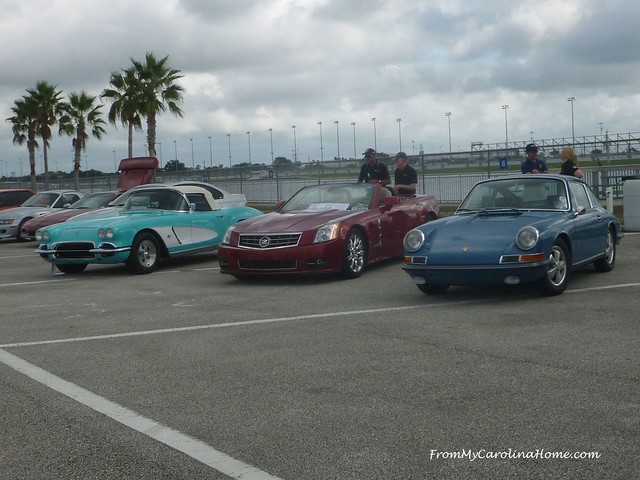 We saw a classic Morgan next to a new Mustang, with a BMW behind it. 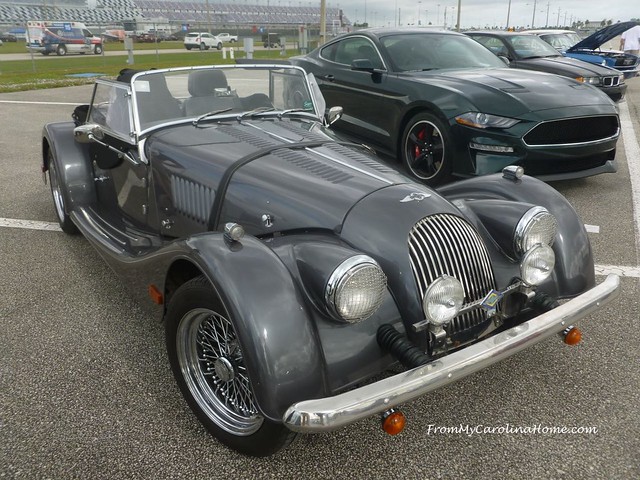 Here a red Alfa Romeo is next to a blue Porsche, a creamy yellow Jaguar, and a brown Porsche. 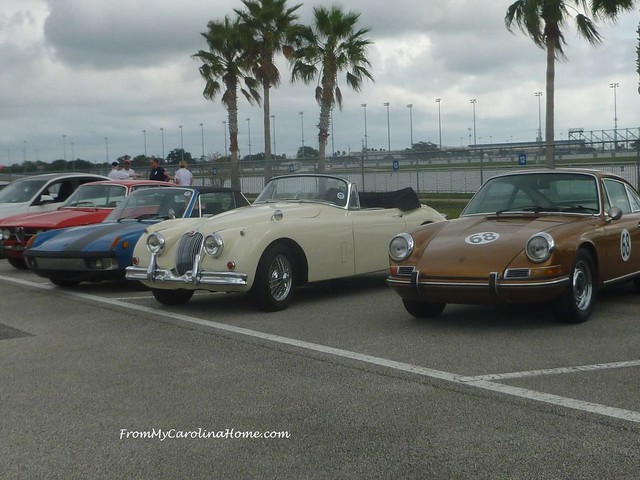 Clouds were rolling in, and I was grateful that I didn’t have to sit in hot sun.  We found this hairpin turn to be a great place to watch the action.  From here we could stand up and see the entire back of the track behind us too. 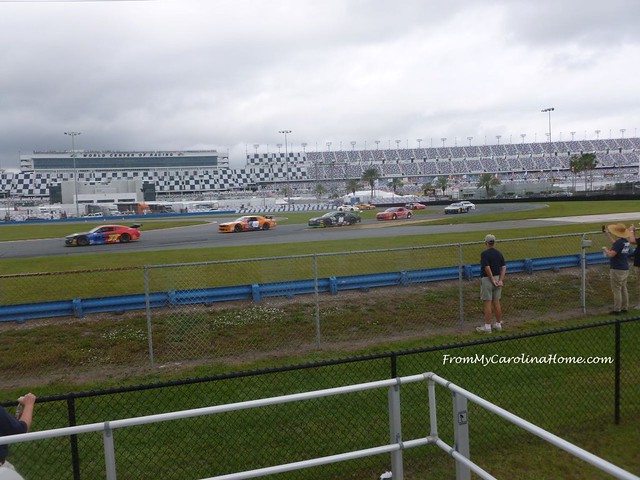 The big feature race of the day came after lunch with the Classic racers.  There was a ‘grid walk’ during the lunch break to allow spectators to get up close with the cars and drivers. 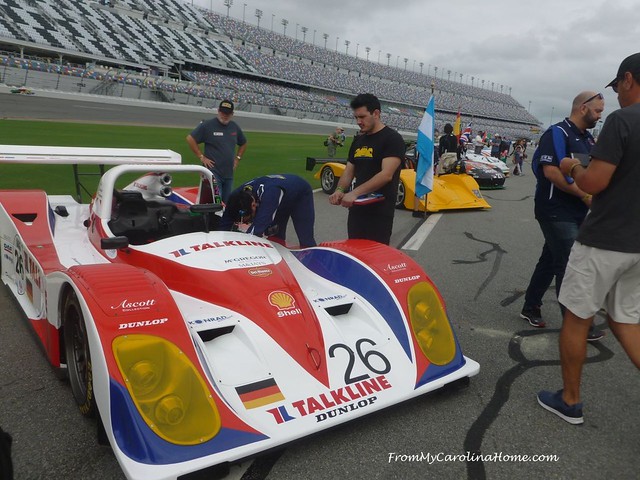 A bright yellow Lola is on the grid next to a tiger striped Porsche with a SuperFlo sponsor.  The sponsors likely are not current, but the cars are still painted the way they originally raced decades ago. 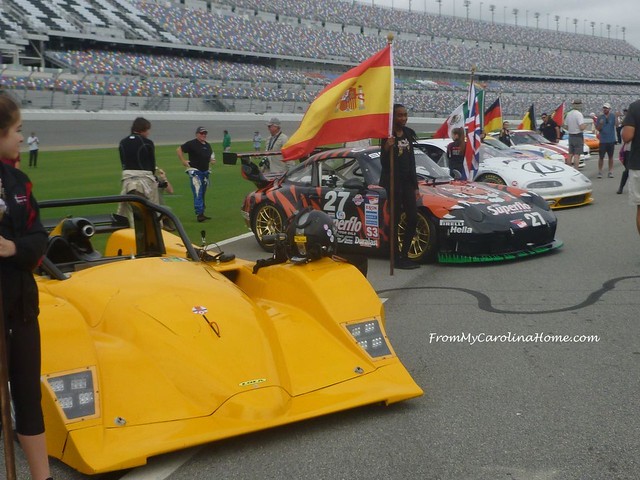 I thought this was pretty cute, on the #27 tiger striped car. 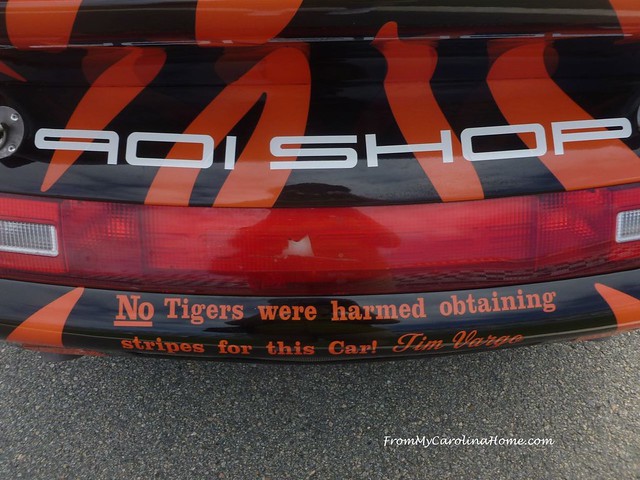 Many marques were represented, like production manufacturers Oldsmobile and Porsche as well as racing giants Lola and McLaren, and many more. 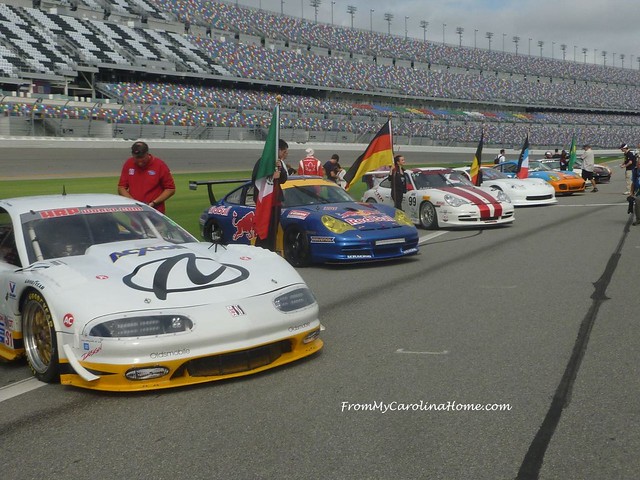 Here’s a look at the other side of the grid, more racers from the back with all the spoilers in view.  If I remember correctly, this group had 18 or so cars. 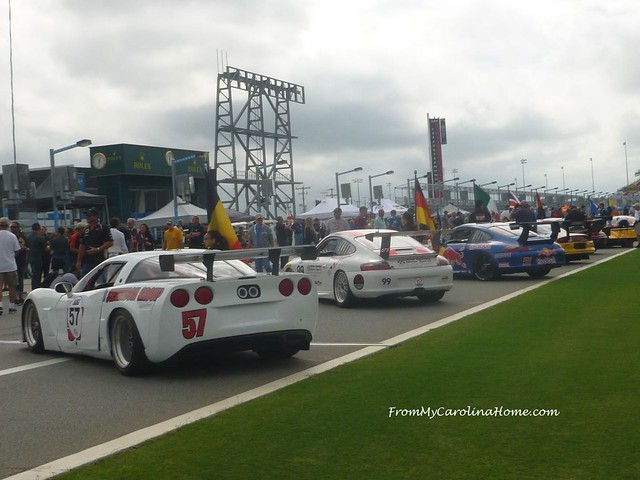 We took some time going into the paddocks to see the frenetic activity of getting cars ready to race. 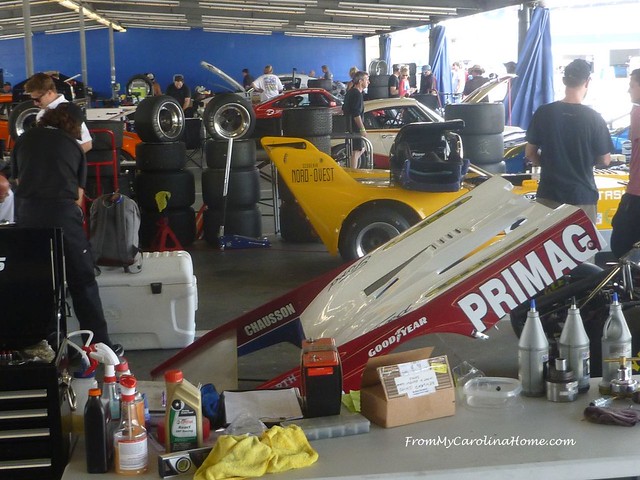 It was fun to see all the car designs.  Ah, the aroma of the track – gasoline, oil, and exhaust fumes! 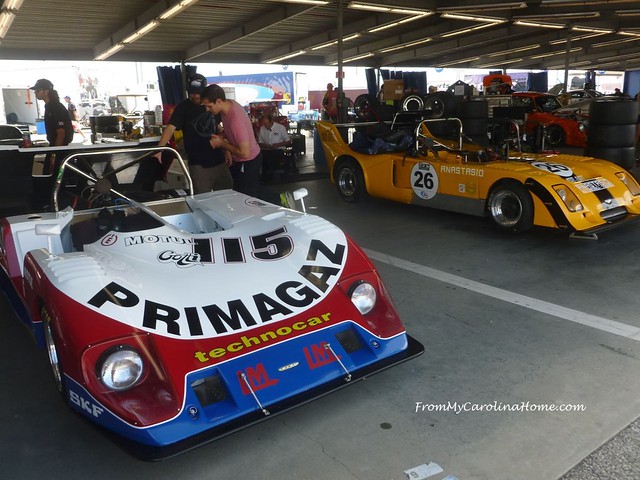 This one was pretty special, I liked the lines of this racer. 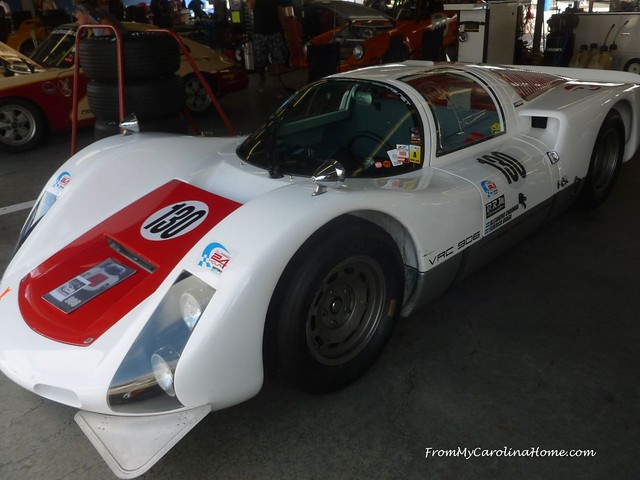 Lots of activity, as racers came in from their track times, or were preparing to go out. 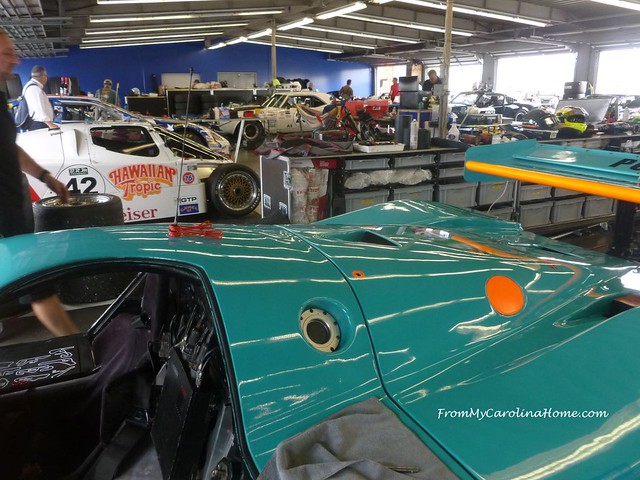 So, back up to the upper level of the Fan Zone area so we could watch the next class of mostly Porsches and Mustangs on the front straight with the start/finish line. 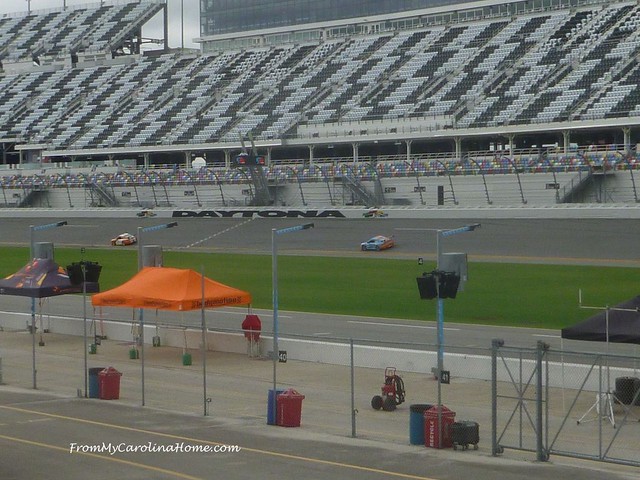 Strolling around in the paddock area after that race, I saw this colorful car with a great team name, Lucky Dog Racing, and decided I would follow his race day.  It is more fun when you have someone to cheer for. 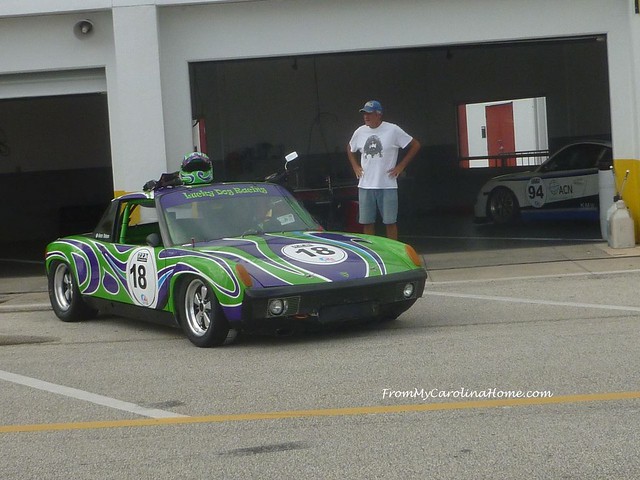 He was in the next group to go on the track, here in the last car position seen in this picture, but not last in the group.  One of the cars made an error by bumping into the red car and spinning him around.  That car isn’t in this picture, as he went on by.  Making contact with another car is a big no-no in vintage racing!  I assume that race control had a word with that driver after the race was over. 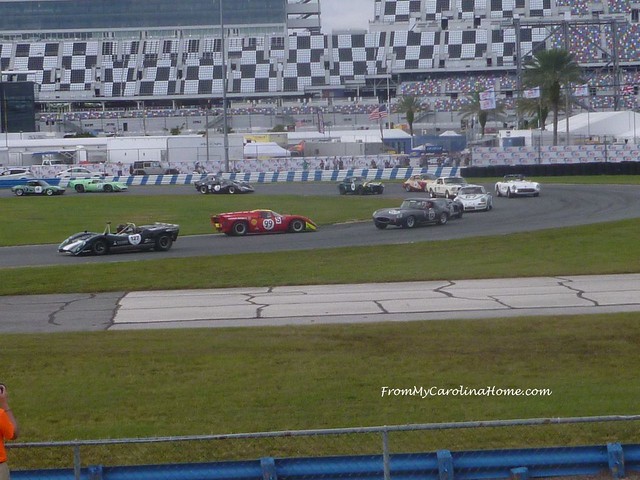 A couple of laps later, and I saw Lucky Dog Racing again, but he was falling back in the race order. 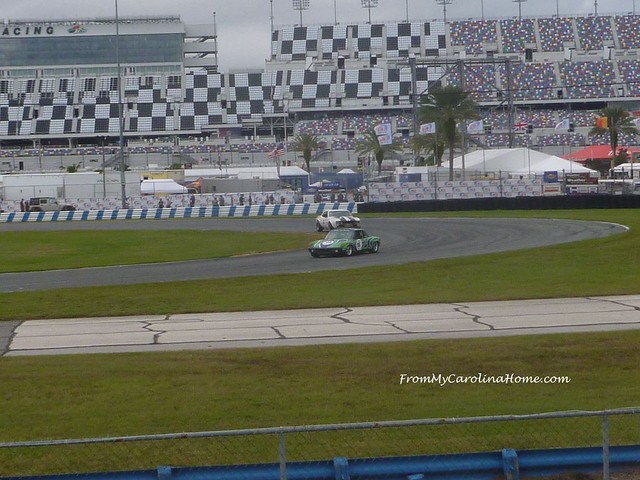 When he disappeared from the race, we went looking for him in the paddock.  The crew was deep into replacing a transmission section.   They had three hours to get it done before his next time to be on the track. 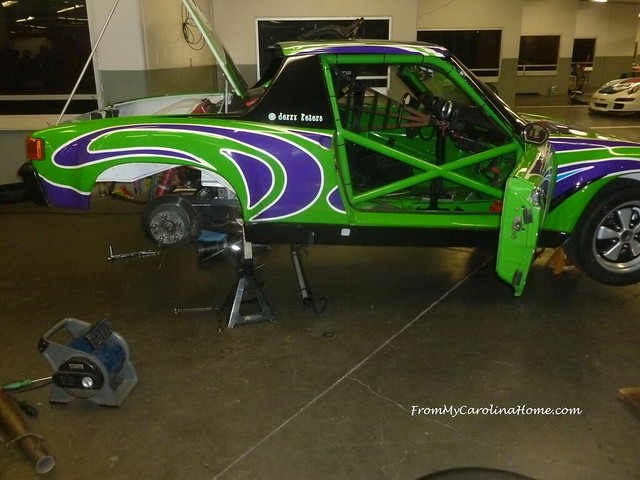 We went back to the house for a rest, and to have some dinner, then came back to the track to watch some of the night races.  This was my first time to see a race at night, and it was pretty exciting. 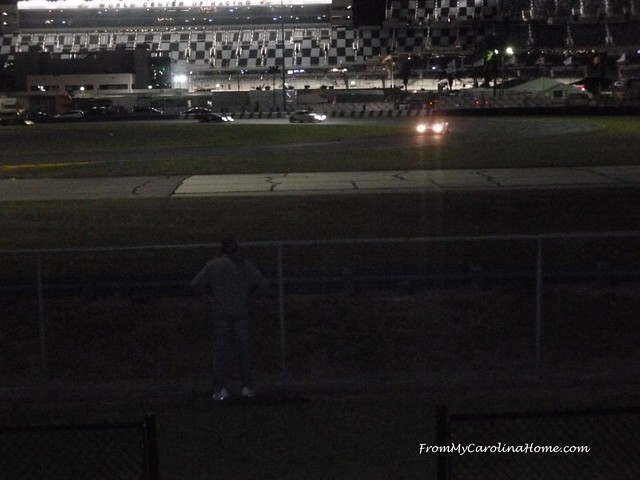 It was harder to get pictures at night, but you get the idea.  Racing is a bit more difficult in the hairpin without track lighting like there is on the main track area. 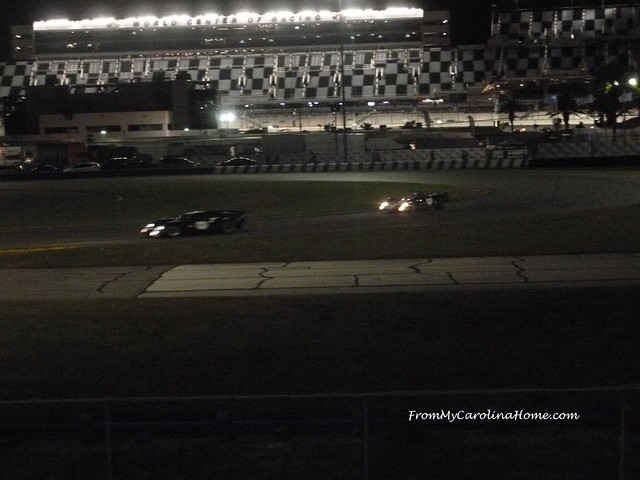 The track set off a fireworks show around 8 pm. 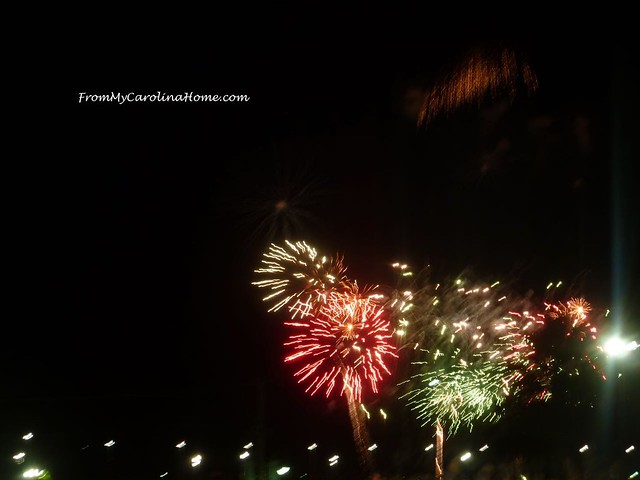 It was pretty good, lasting about 15 minutes. 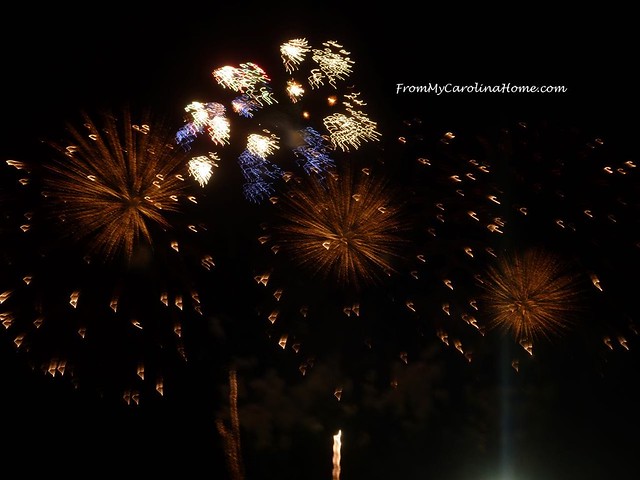 I was really pleased at how well my little camera captured the fireworks against the night sky. 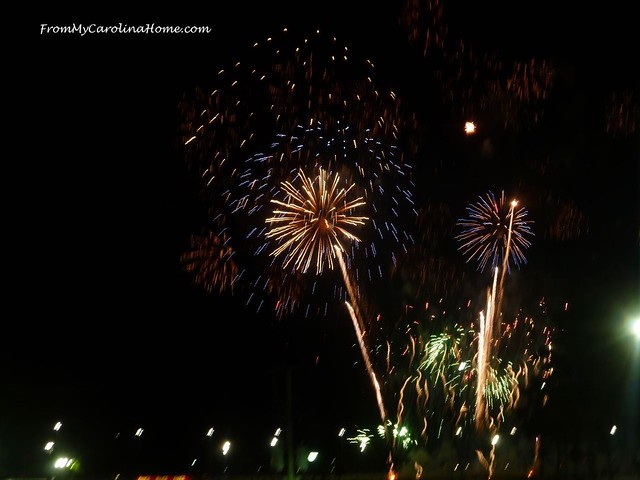 Then back to the races for one more.  After this one, we’d had enough for one day, although the racing went on all night. 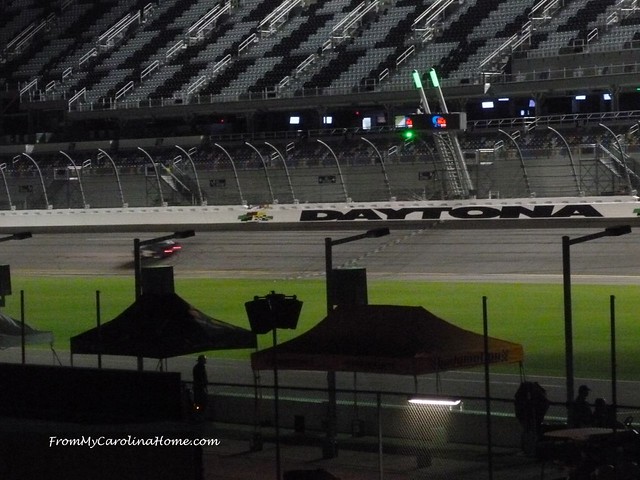 The next day, DH and his friend went back to the track, while us gals stayed home to watch football games.  It was a fun weekend.

Have you done any weekend getaways lately?

8 thoughts on “A Day at the Races”