The final part of the Apple Festival festivities is the King Apple parade on Labor Day.  After delivering my entries to the State Fair, I ran home to get DH and we got downtown miraculously finding a parking space only two blocks away from the parade route.  The Corvette club was going by, and we made our way to the north end of the street so we could stand in the shade of the arbored section where three bed and breakfast inns are located. 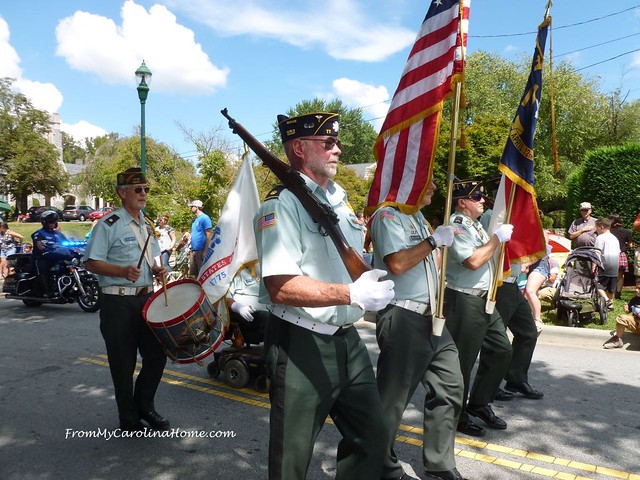 The parade lasted about an hour, with all four high school bands marching and playing, three dance schools doing routines, lots of floats, dignitaries in convertibles, and a few beauty queens too. 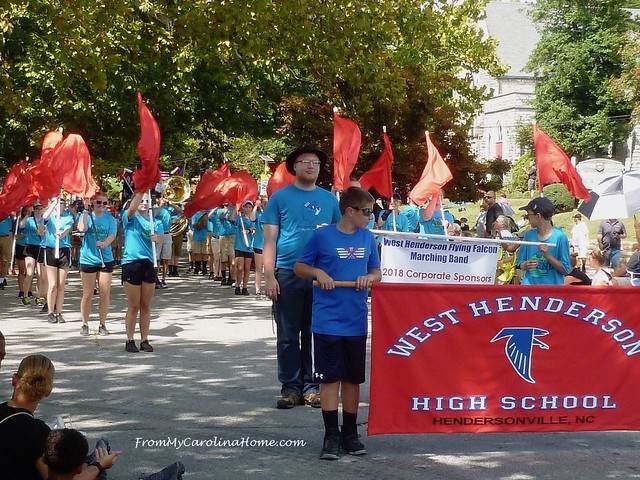 Between all the groups, it seemed like most of the kids in the county were in the parade. 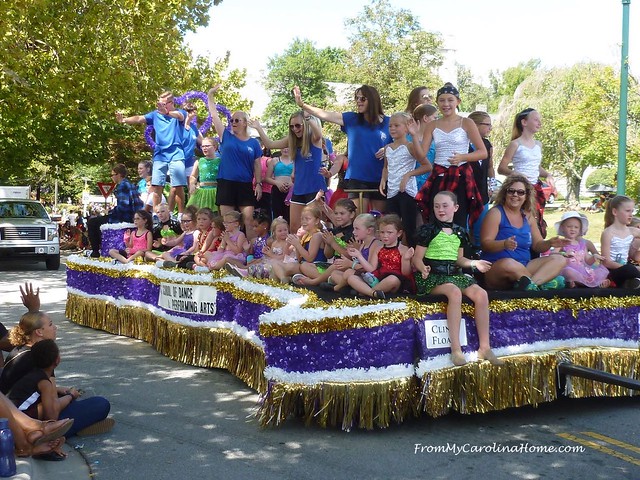 This Wizard of Oz themed float had the perfect message for our love of small town life. 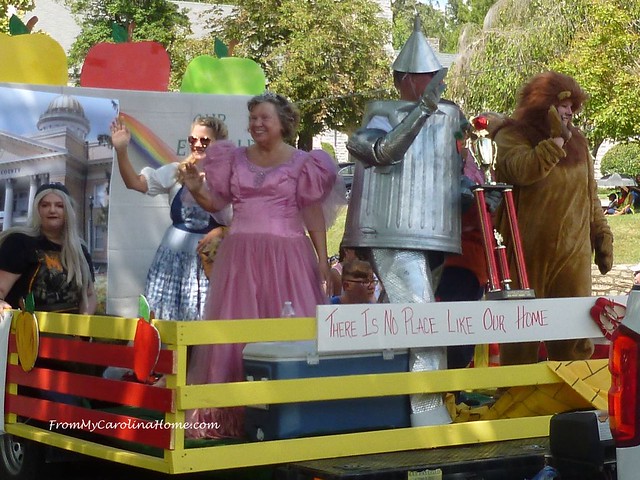 Every municipality in the county sent a fire truck for the parade, I think somewhere between 20-25!! 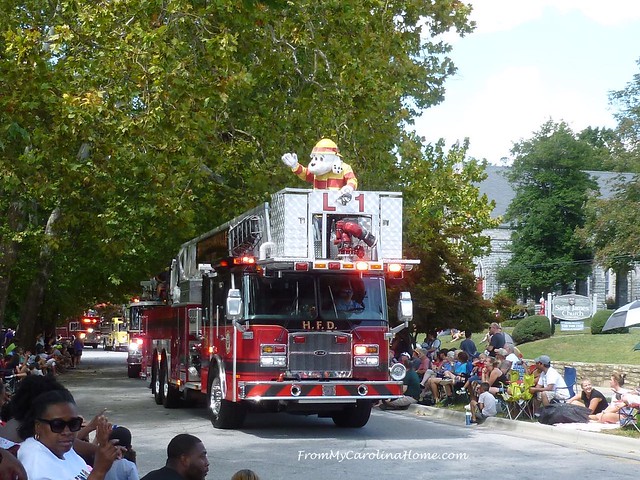 Every one of them was intermittently honking the horn and running their sirens. 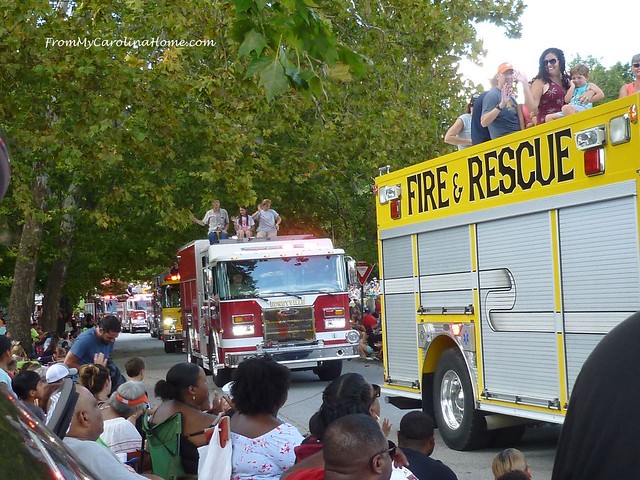 It was loud and fun, and they just kept coming! 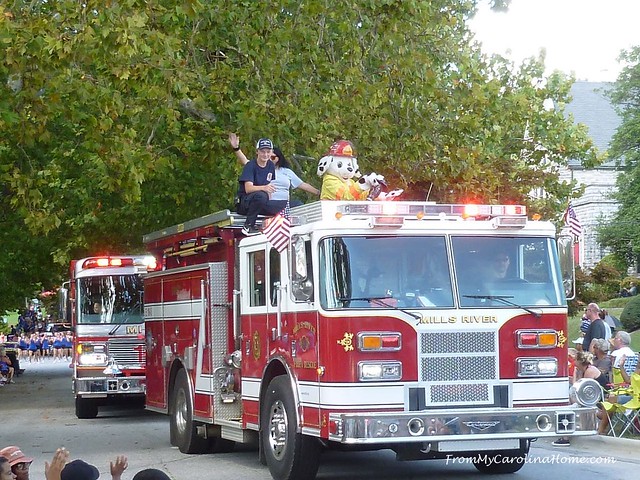 The local Boy Scouts had a camping display that they carried, along with a color guard of state and national flags. 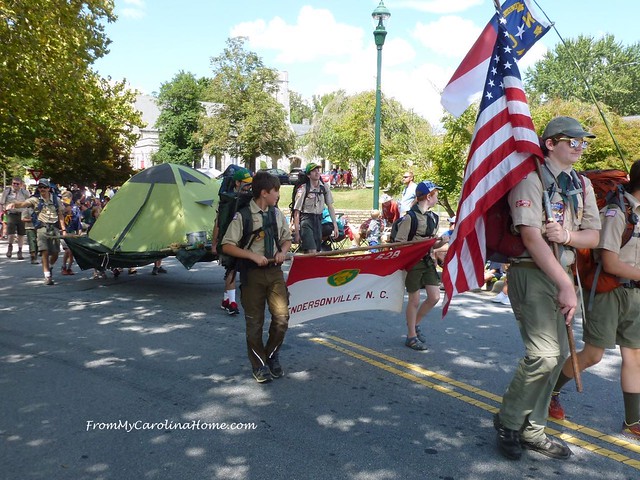 More old cars were seen in the parade here and there.  I liked this one. 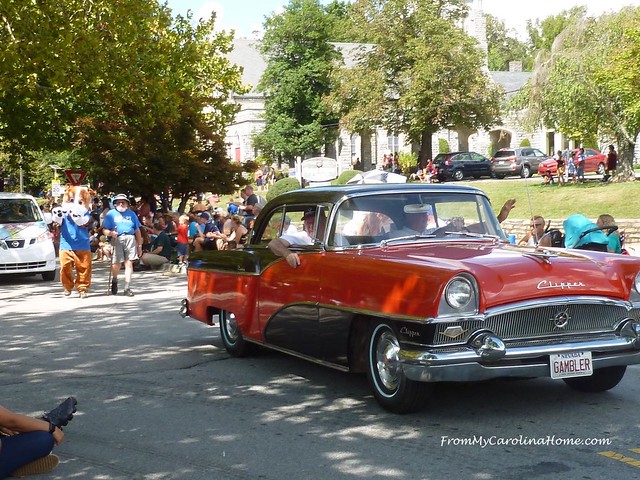 This trolley car was decorated all over with apples.  Several large vans and buses carried residents of the senior living centers, all smiling and waving out the windows. 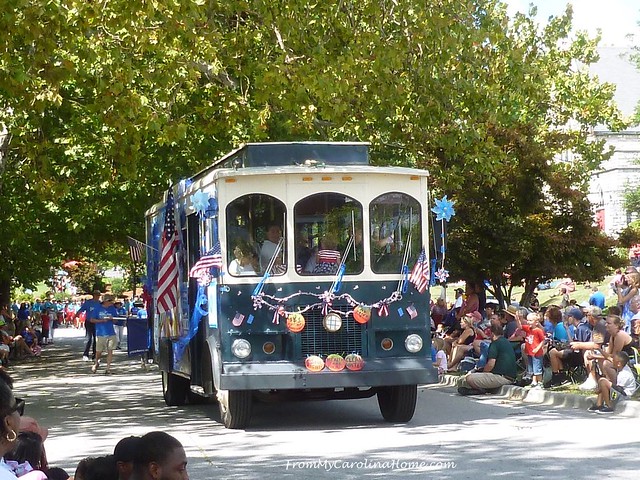 Several floats had veterans groups, and we all stood and cheered with each one. 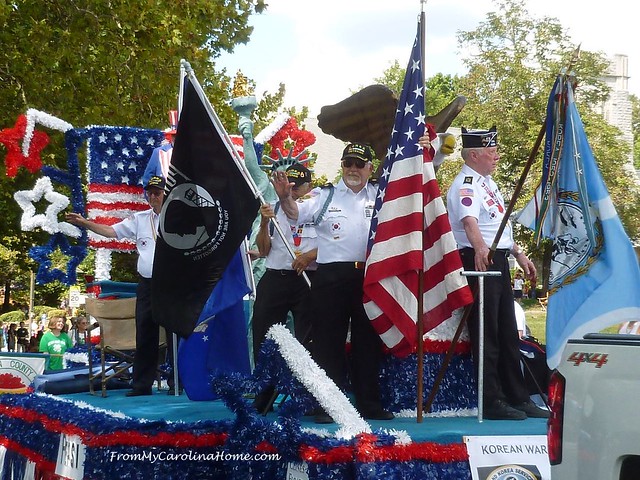 The local theater group from the Flat Rock Playhouse had Miss Hairspray 1962. 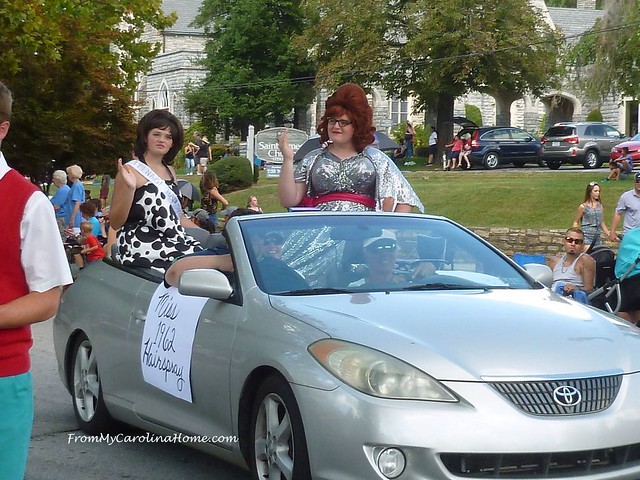 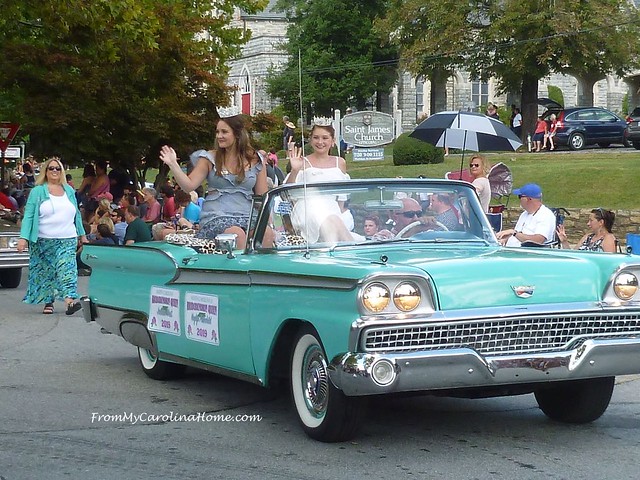 Remember the firefighter from yesterday?  He danced down the street in the parade, accompanied by his friend the police officer. 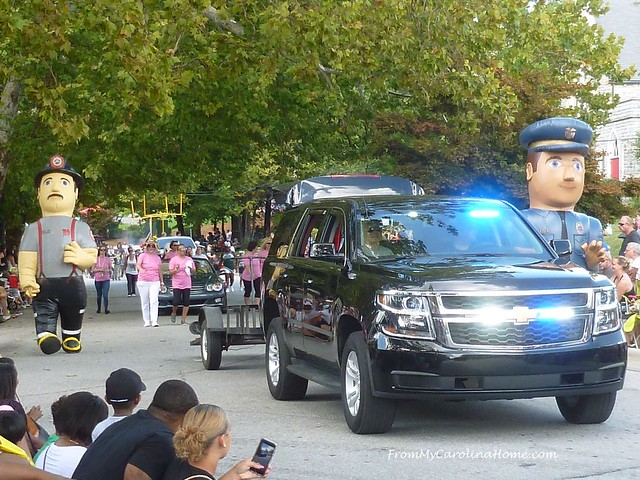 These guys had so much energy!!  They looked like they were having a great time interacting with the crowds. 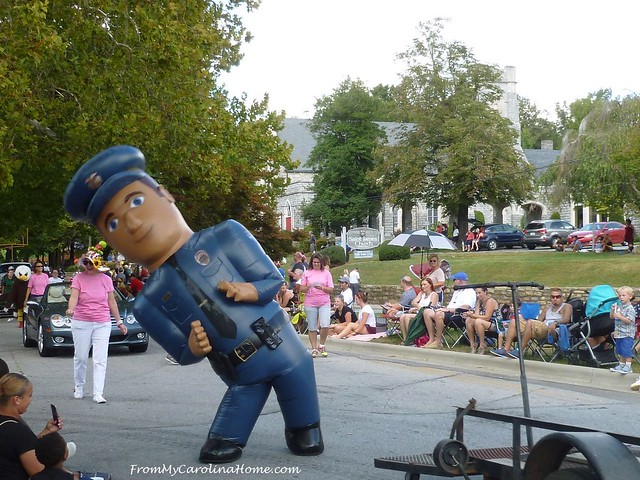 We are a farm and orchard county, so of course there were tractors in the parade. 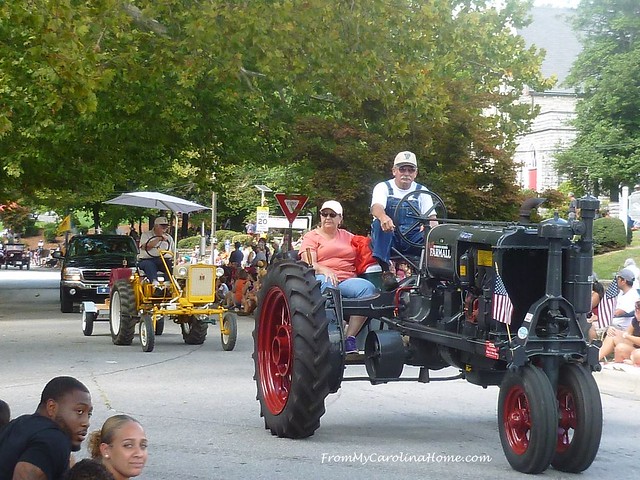 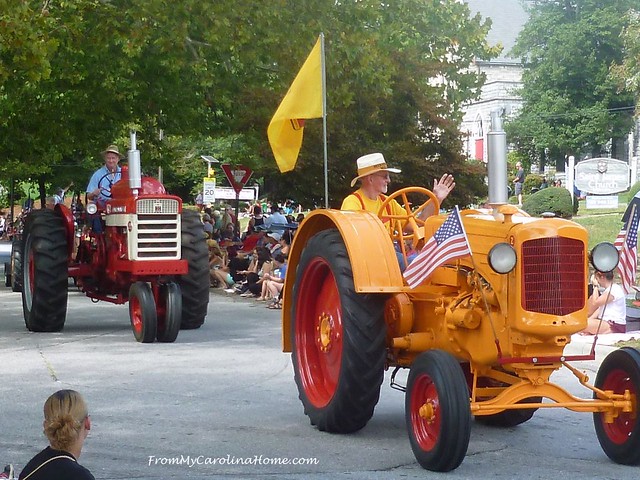 Then the Antique Car Club guys came down.  At the end of the row was another decorated bus full of seniors. 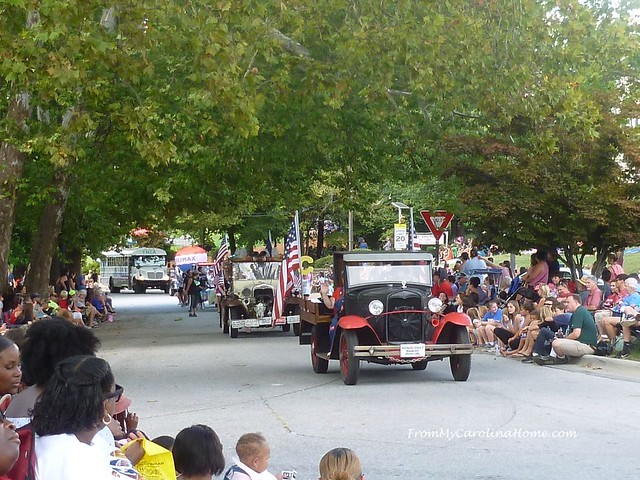 Most of the floats had a patriotic theme. 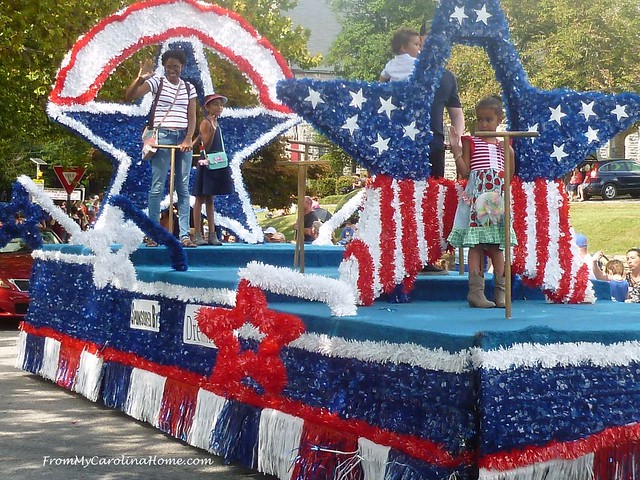 This one had an Elvis impersonator, and he was fabulous!  He really sounded a lot like Elvis. 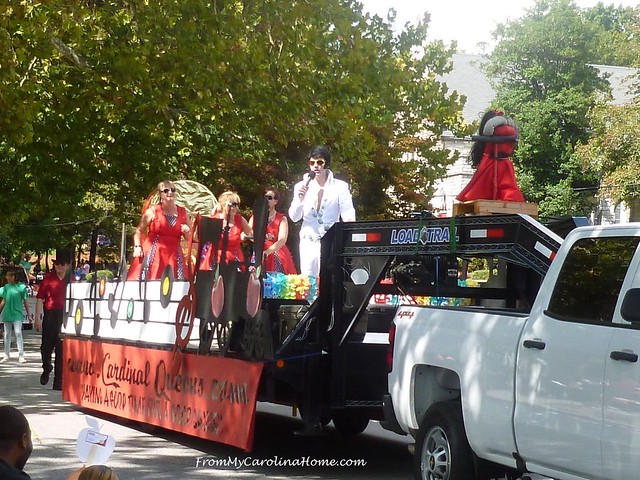 The last float was our Apple Ambassador who receives a scholarship.  The runner up is in front of her, and the other four finalists are in the front.  Their gowns were stunning.  It was a good thing that the horse riders were last, LOL! 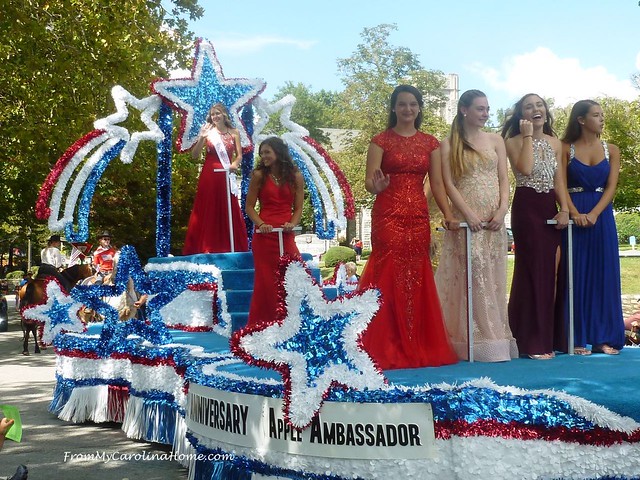 Aren’t small town parades something wonderful?  Do you have a Labor Day parade in your area?