It has just been so frazzling hot here, with humidity at 68% early in the morning, it is hard to get out and get some weeding done.  I started early one morning, and had to come in after only an hour, in desperate need of a shower.   Even though the temperature was only 70°F, combined with that humidity was miserable.   The flowers seem to like it for the most part, and I shared the garden with a number of large honey bees that morning too.  Picture heavy post coming today. 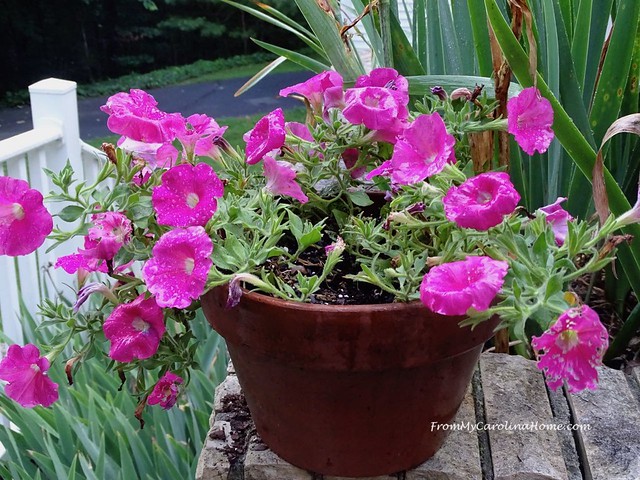 The white lily gave us two blooms this year.  I think this may be its fifth year to bloom in the garden. 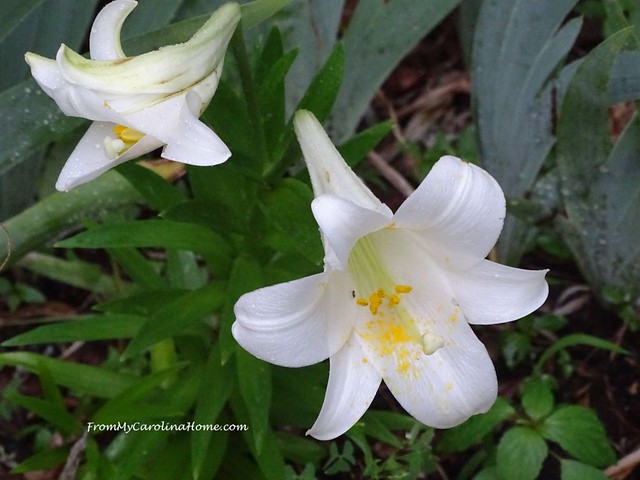 I kept a few of the ruffled edge day lilies, but I think I’ll move them out of the primary bed this year.  I’m just tired of them. 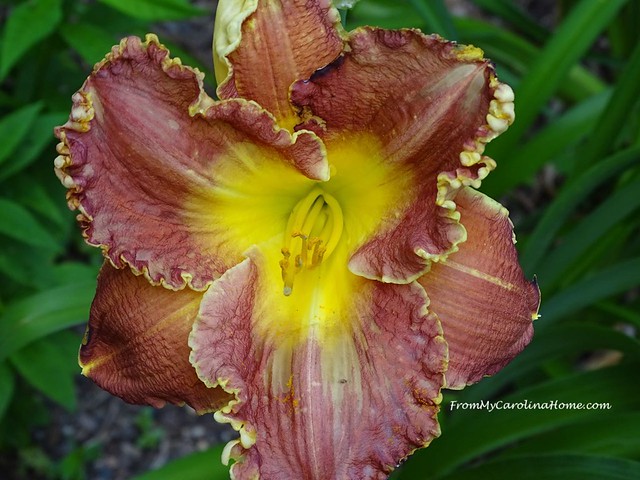 The light peach one is pretty with its yellow throat.  These will bloom daily for about a month or so. 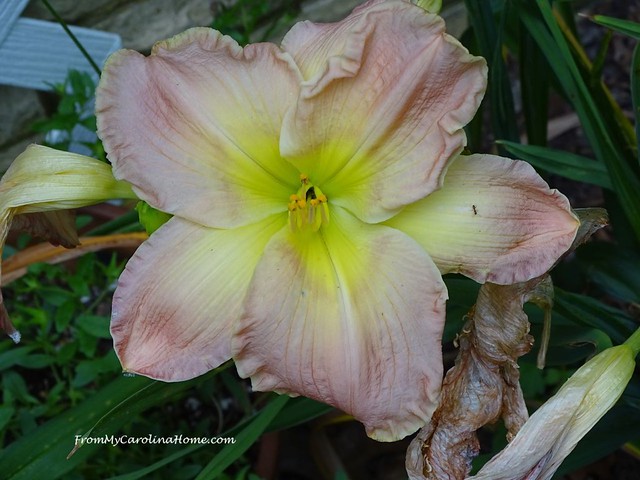 I didn’t even remember this one. 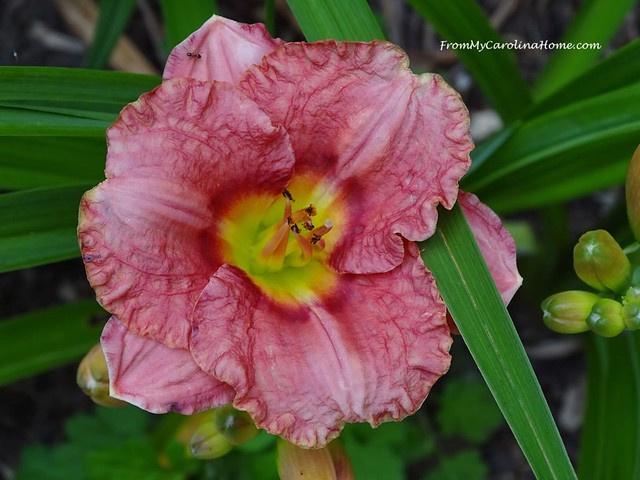 The hydrangea is spilling over the steps and railing with multiple colors of blooms, mostly this lovely lavendar. 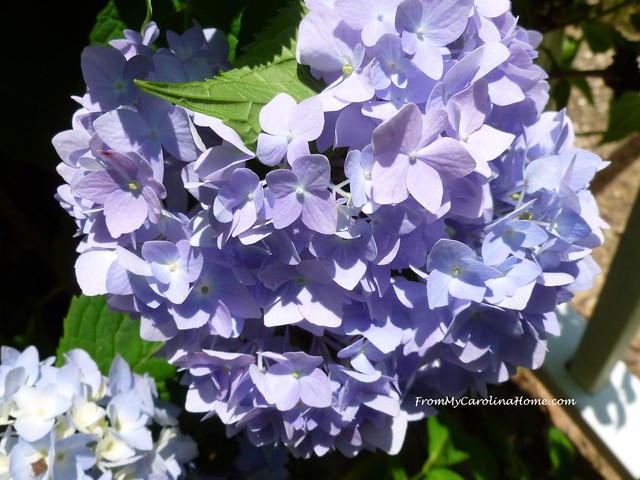 Some of the blooms are a clear blue.  No pink so far this year, which tells me the soil is going back to its more acid pH state.  I need to add some lime to get pink ones again. 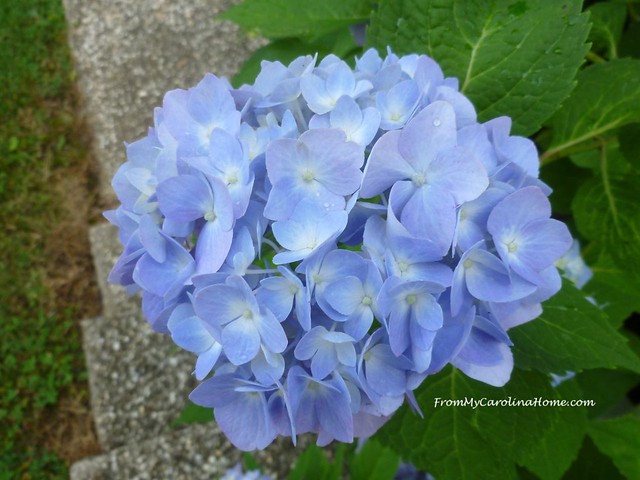 I think this is a white daisy, huge in comparison to the little plant I put in last summer.  It is just now starting to think about blooming, so we’ll see. 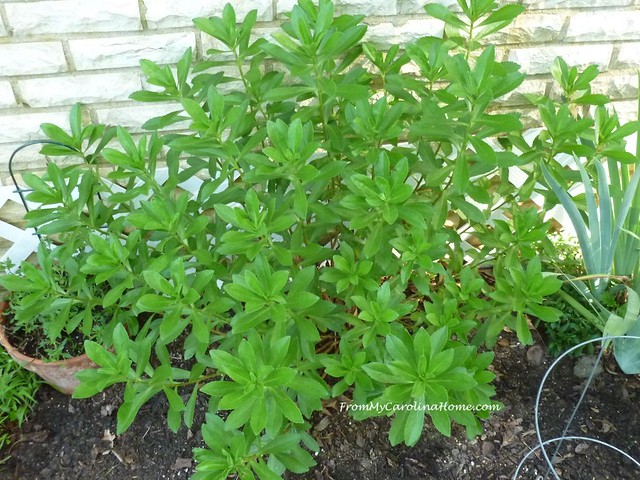 Now I can’t remember what this is.  Did I plant it or is it a weed?  I looked back on the gardening posts from last year, one benefit to writing a blog, LOL!!  Could it possibly be the pink daisy from last August?  I’ll leave it for now and wait to see what it does. 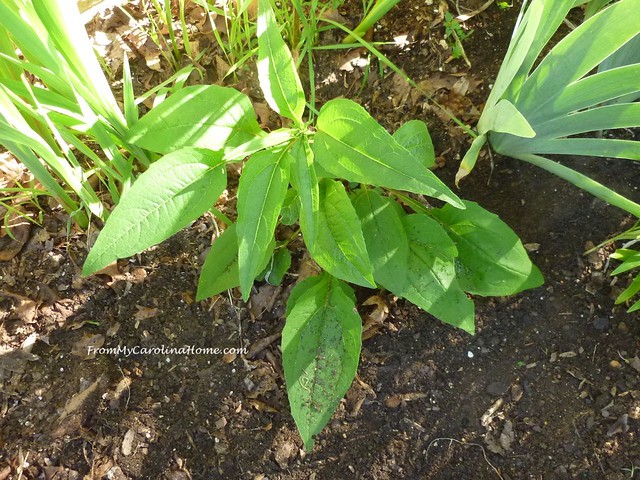 Out on the feeder, the goldfinches had a gathering for lunch one day.  Perhaps somebody had a birthday and they decided to celebrate together with a meal out. 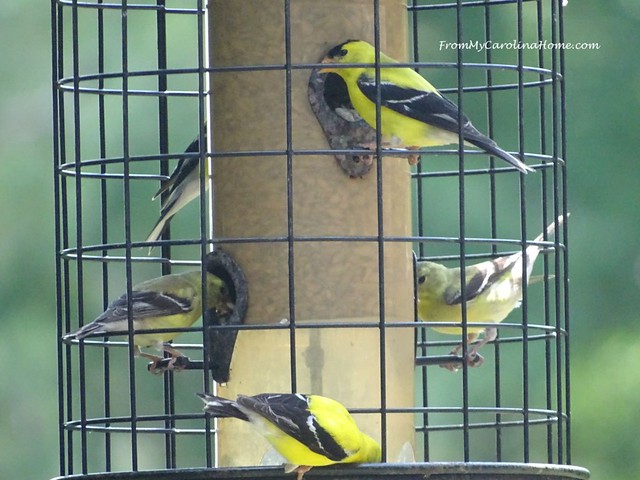 Several house finches are stopping by regularly.  Unfortunately, we had to take the lower feeder down for a while because the doves discovered it.  The stupid doves do not scare easily, and will sit on the feeder and sleep to try to guard the food for themselves, the pigs.  So I go out and run them off, but they just go sit in the closest tree and wait.  The little birds come back, then half an hour later I have to run the doves off again.  Taking this feeder down, the little birds can eat from the caged feeder that the doves cannot get to.  We’ll put this one back up in a week or so, once the doves move on. 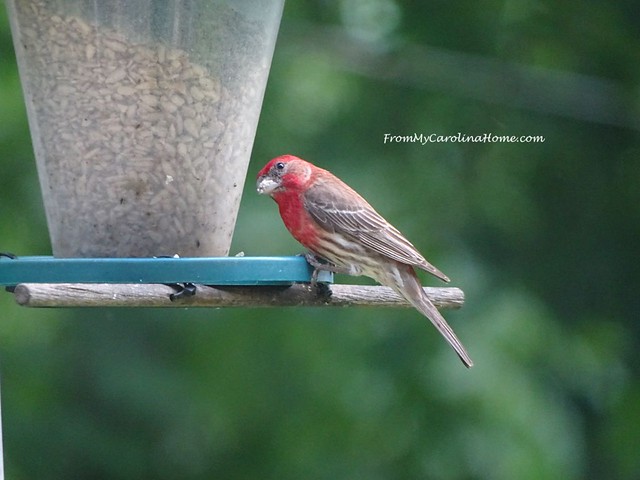 I had to include this blurry photo, the only one I have managed to get of the male ruby throated hummingbird who began visiting this year.  Up to now, I have only seen two females, so I was excited to see the flash of red. 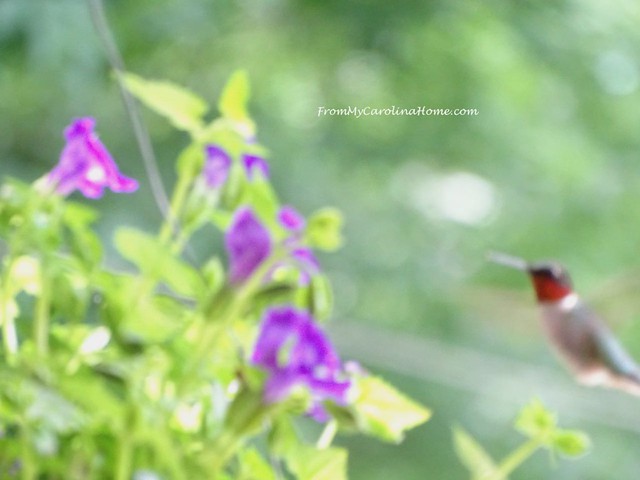 We had a flock of robins visiting, hard to get a photo of them, they tend to spread out.  There were about 2 dozen of them on the ground in the meadow, and this guy in the tree. 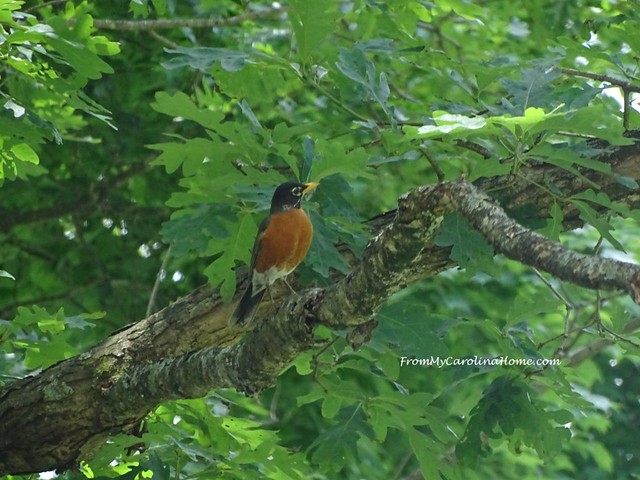 The turkey continues to visit, mostly by himself.  On this day, however, he was preening for two females in the meadow.  I’ve not seen this in summer before, usually he only struts like this in early spring and in the fall. 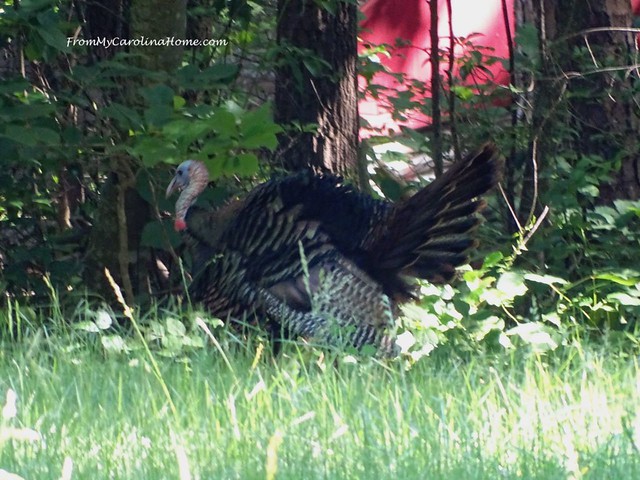 This guy defies identification.  Multiple runs through my bird book and searches on the internet have failed to identify him.  The blue on the wings and tail, along with the white eye ring and a speckled breast seem to be the identifying features.     Update – It is a juvenile Eastern Bluebird, thanks to helpful readers!! 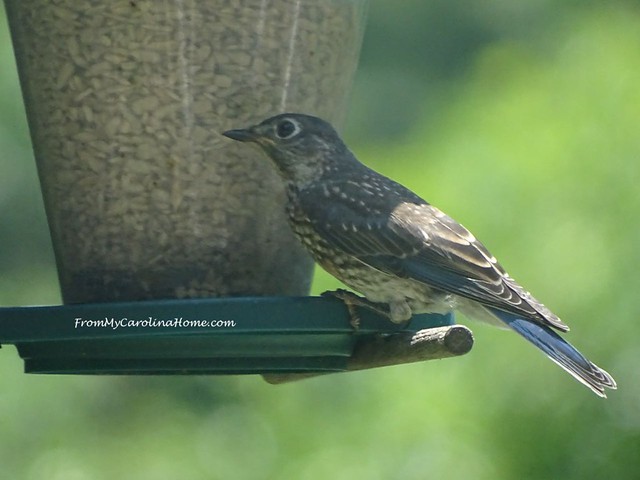 The torenias are flourishing in the heat, as long as I keep them watered they will thrive. 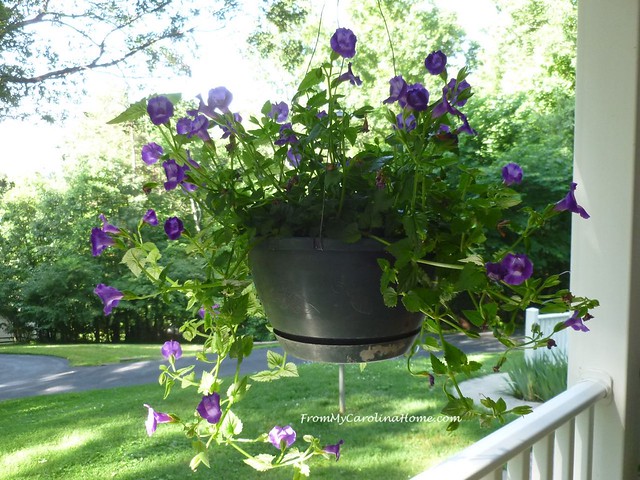 In the pots under the mosaic tables, the bargain impatiens are blooming.  Somehow I managed without trying to get each pot to have only one color.  How’d that happen? 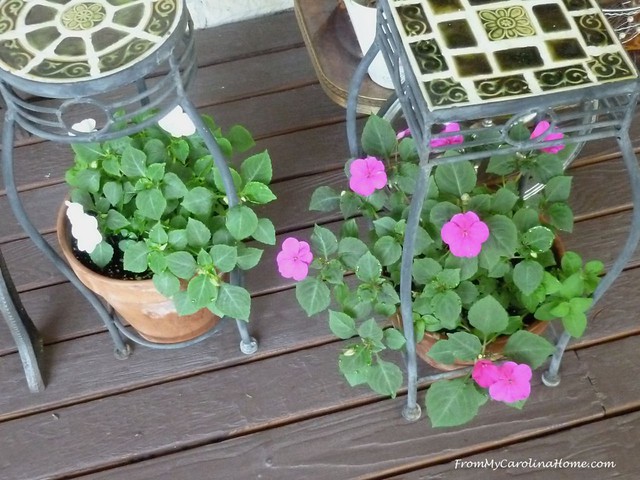 The third table pot has this lovely color, a pretty lavendar pink with a darker throat.  I like this one a lot!! 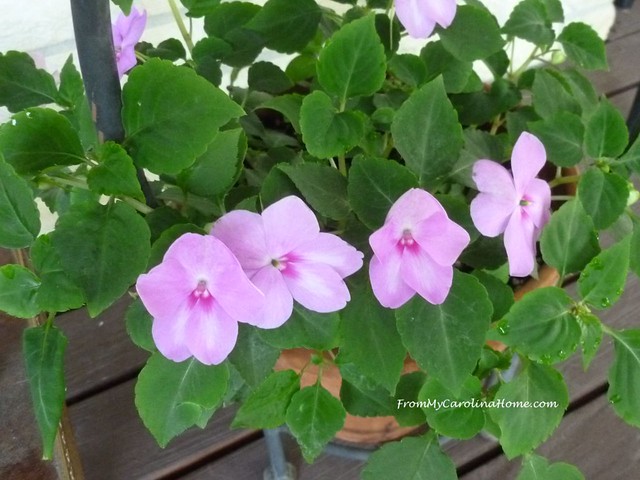 The squirrels looked hungry so I gave them my leftover french fries from lunch out one day.  There were four of them, and each one grabbed a fry, and ran off to gobble down the prize. 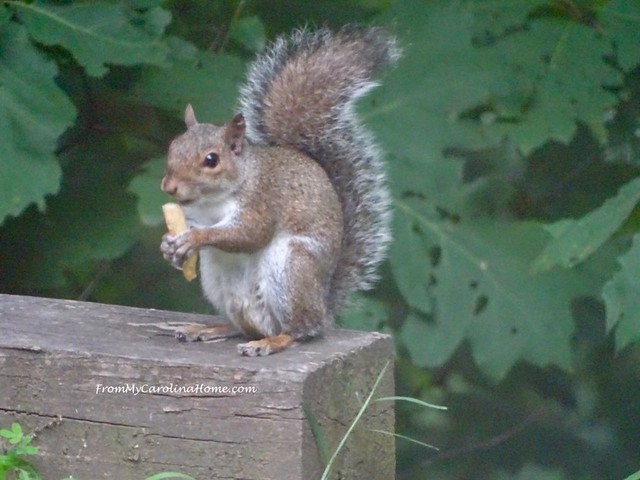 On the vegetable front, results are mixed.  The tomato in the pot is going great, getting huge and producing flowers.  The other two are fairly scrawny so far.  One squash plant has died, and three of the basil plants died.  The last basil isn’t growing very well either, so I will move its pot to a sunnier location.  DH is in the process of painting the veranda, so things will get moved around a lot this week. 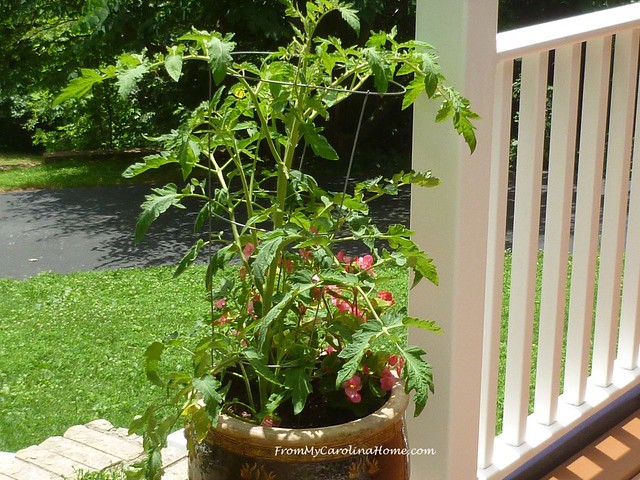 The cleome is doing beautifully.  When it gives me some seeds, I am going to scatter some in the meadow.  We are only mowing it once a month this year, to give the pollinators more flowers. 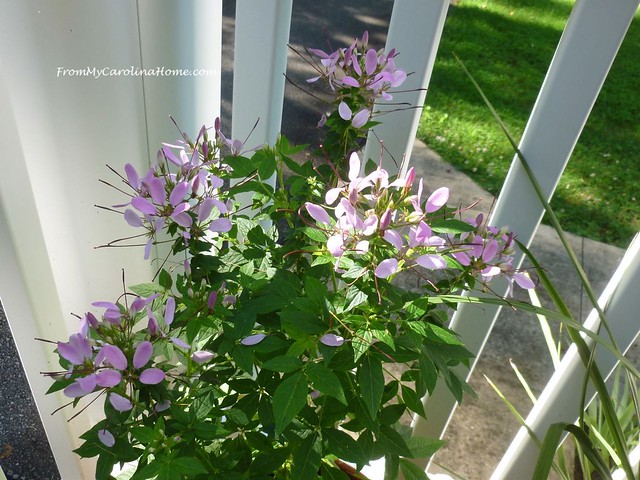 The birdcage planter is beginning to bloom with the yellow bidens. 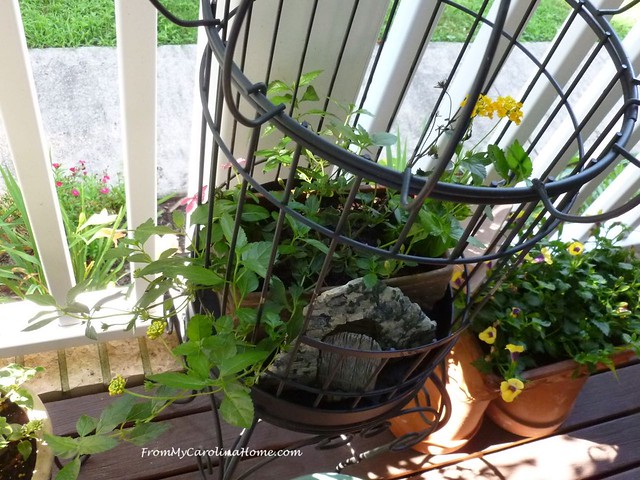 Yellow torenias spill over the large coffee cup planter I got at a thrift store in Nashville last year. 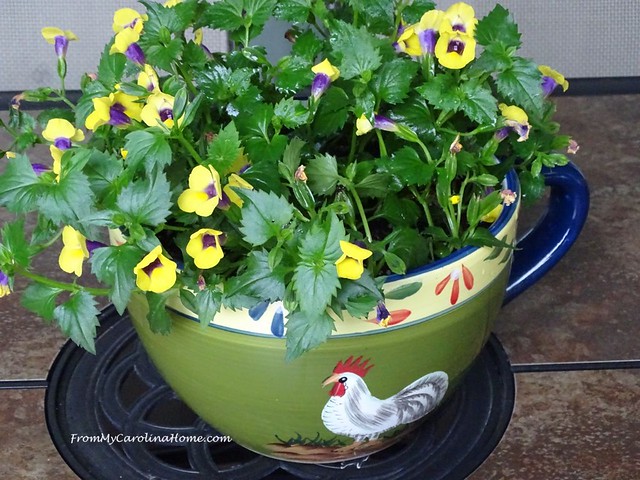 I cut back the geraniums as they were looking a bit scraggly with spent blooms.  They will bloom again soon.  Did you know that this week is National Pollinator Week?  There are events all over the country this week, all to help add more flowers to our environment, and help the populations of the critical pollinators that help provide 1/3 of our food supply.  We need them, and their numbers are decreasing.

20 thoughts on “June in the Garden”