We are lucky to live in an area that has so much to do within driving distance, cultural centers, performance halls, and museums in more than one direction.  About 45 minutes away is the small town of Brevard, NC that boasts some of the best music venues and performances of the area.  It helps that fellow car club member Jamie Hafner is a conductor for the Blue Ridge Community Brass band, and often joins the students at the college as a guest conductor.  A couple of summers ago, I showed the outdoor pavilion of Brevard Music College during a Patriotic Pops Concert. Recently, we were invited to the Porter Center for the Performing Arts at Brevard College to hear the students perform works from several classical pieces, along with the Blue Ridge Community Brass band, again with some of the works conducted by Jamie. The real draw was they were going to perform a brass composition that would incorporate Brevard College’s spectacular pipe organ. 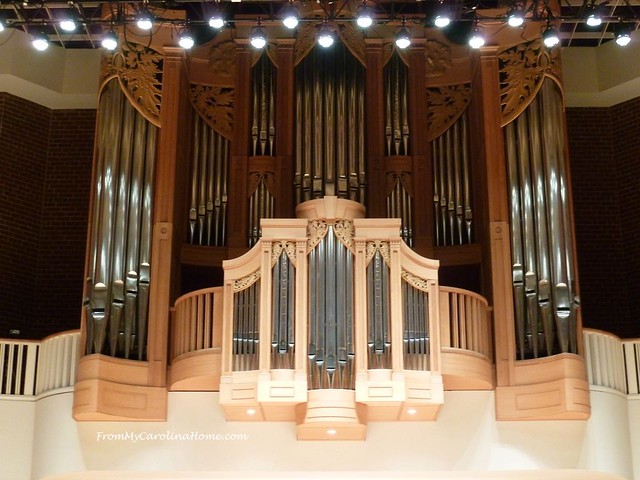 This young man, Raleigh Durham, was the star of the second piece played, Snow of an Aynu Village by Hirokazu Fukushima.  This is a modern composition with an impressive percussion score. 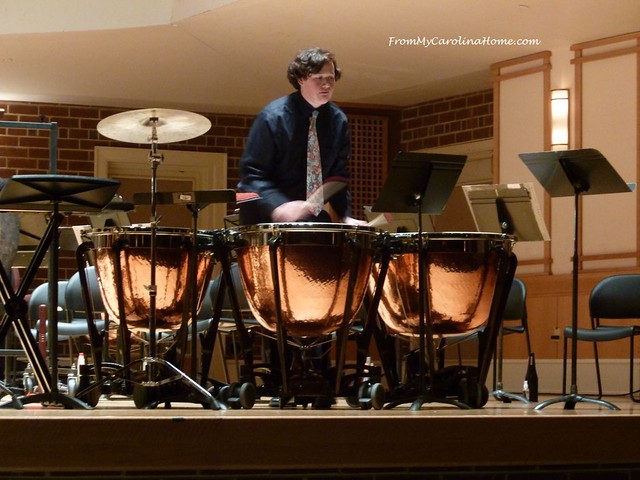 He moved between large drums, to cymbals, to the xylophone, and the gong along with everything else up at the front of the stage.  He had four music stands, and moved his score between them as he went along. 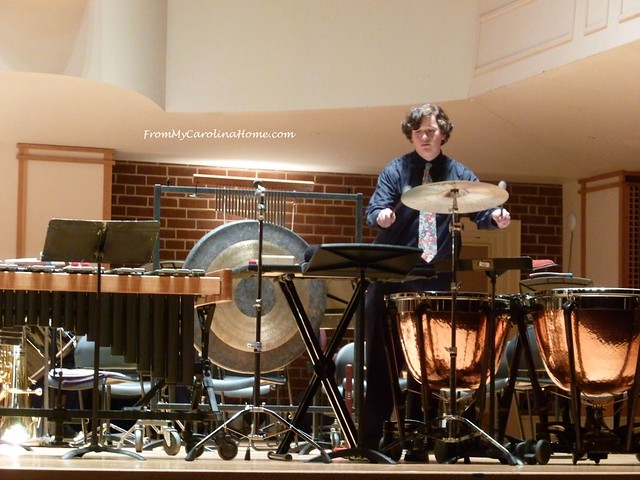 Next our friend and conductor, Jamie Hafner, conducted the Canzon in Double Echo by Grabrieli written in 1608.  Jamie is facing the audience, because his players were in the balconies. 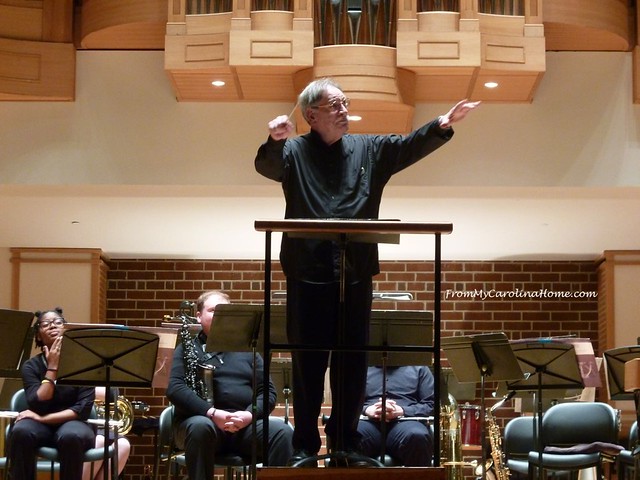 On the left upper balcony, members began to play. 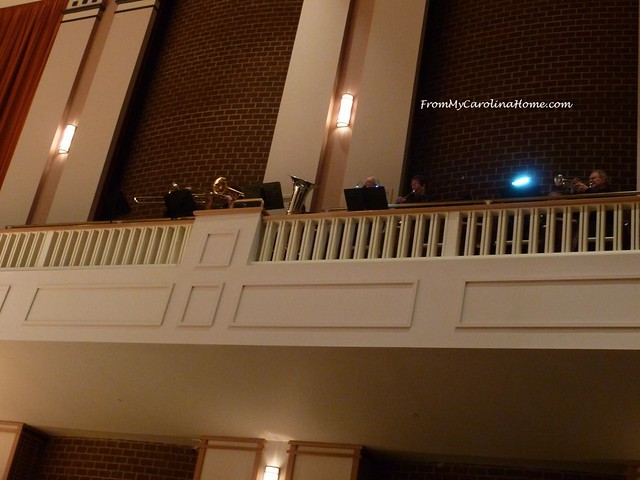 Then on the right side, an echoing from other brass players. 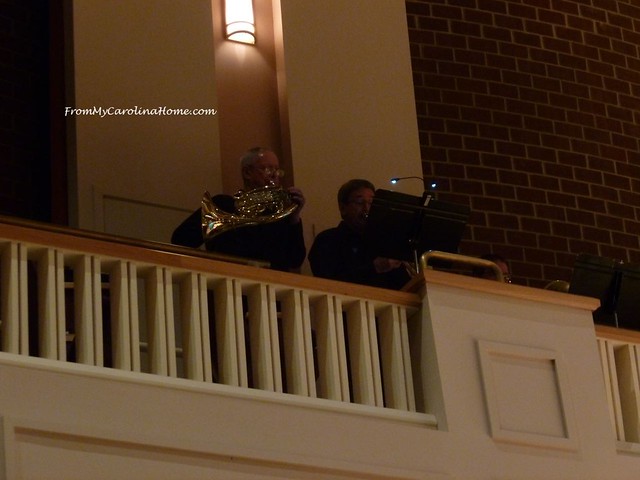 Behind us, also in the balcony, more players did their parts.  It is said that this piece was played in this manner originally in a church, taking advantage of similar balconies to create the first example of ‘stereo’ sound. 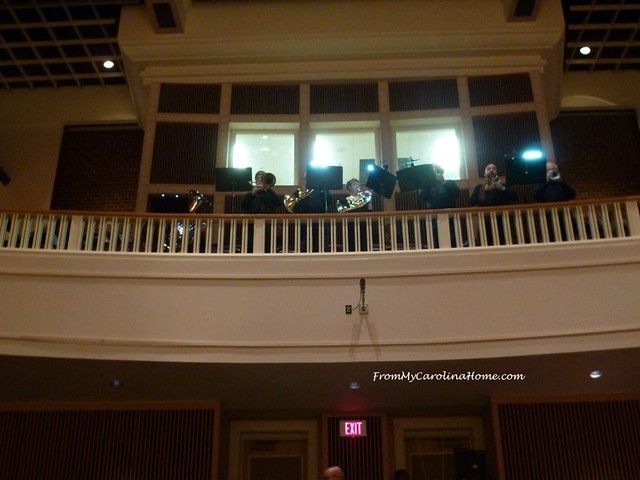 The percussion section did an impromptu piece, not on the program, called Quench.  The players had bottles half filled with water, that they tapped on with drumsticks, bounced on the table and blew across the top to create an interesting blend of sound and rhythm.  As they played, they would drink from the bottles to change the pitch.  Quite unusual! 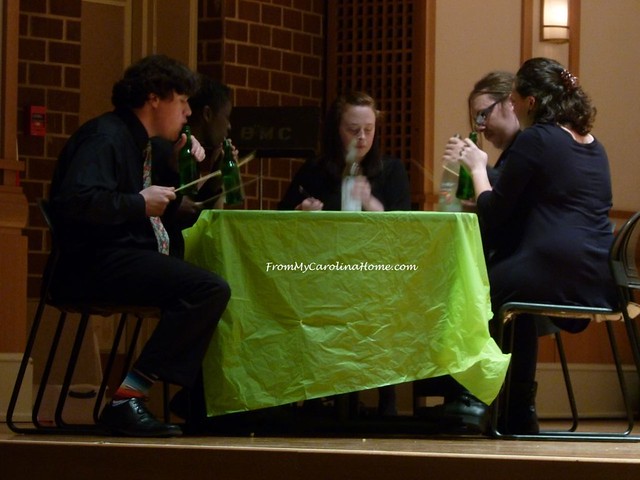 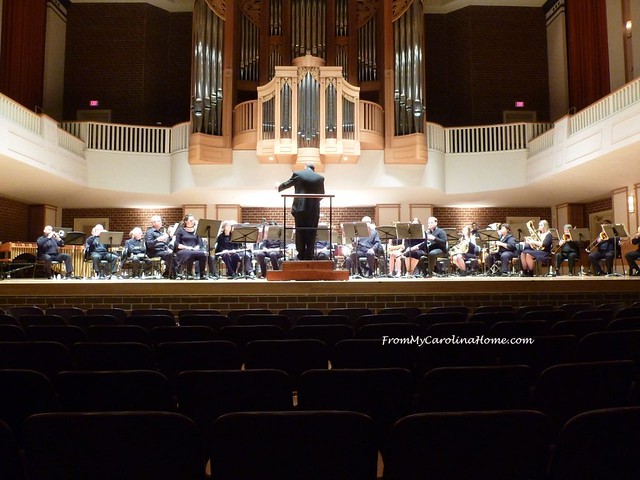 Then the finale piece, Adagio and Finale from Symphony No. 3 for Organ and Brass by Camille Saint Saëns written in 1886.  I shot a short video when the organ began to play. This does not do it justice, but you’ll get the idea.  You’ll see Jamie point to the left side of the balcony for the organist to play.  There is a small camera there presumably that shows the conductor on a screen where the organist can see it.  The best part is about halfway through this two-minute excerpt.  It brought on goose bumps!!  Just click on the arrow in the middle of the linked video to see it, it will play right here.

Then, my favorite all time group, the Moody Blues was inducted into the Rock and Roll Hall of Fame in April of this year.  After so many years, it is about time!!  I often say they wrote the soundtrack for my college years.  Justin Hayward and John Lodge are such gifted songwriters.  It was a bit sad to see the rift continues between them and  Mike Pinder, also a talented keyboardist and songwriter.  The last concert I went to was in Asheville a few years ago to see them perform, and they still sounded great.  Unfortunately, the induction ceremony broadcast was on HBO, so I didn’t get to see it.  But thanks to youtube, here is the induction introduction by Ann Wilson of Heart.

Here’s the acceptance by the Moody Blues members.

Do you enjoy live music performances?

13 thoughts on “Brass Band, Pipe Organ and the Moody Blues”