November is finally getting cooler, more like real autumn weather.  I’ve been waiting for the right time to plant some bulbs, and finally got the perfect time.  It was a cool day earlier in the month, plus the forecast was for rain for the next several days, so I could be sure all the planted bulbs would get watered in well.  I gathered up the bulbs I had purchased a month before, some tools and bone meal, and set out to find spots for all of them. 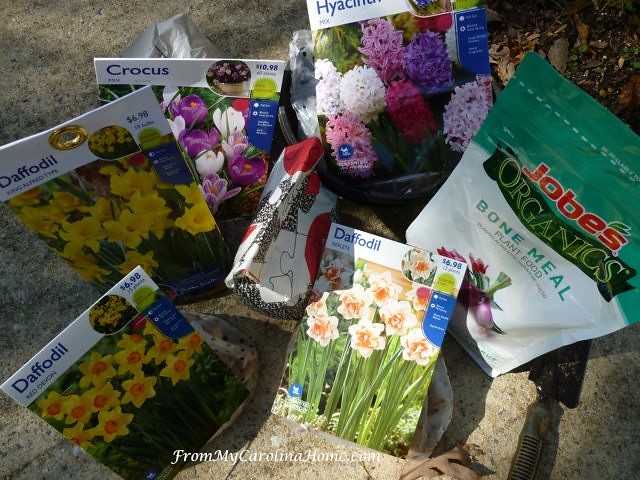 I started the planting with the crocus bulbs. They are planted fairly shallow, so I put them between the rhizomes of my iris plants. Since I had divided the irises last spring, there was plenty of space. Adding the crocus bulbs will give a longer bloom time for this bed near the front door. I threw some bone meal in with each bulb. Some places I could scratch out a long trench and plant several at once. 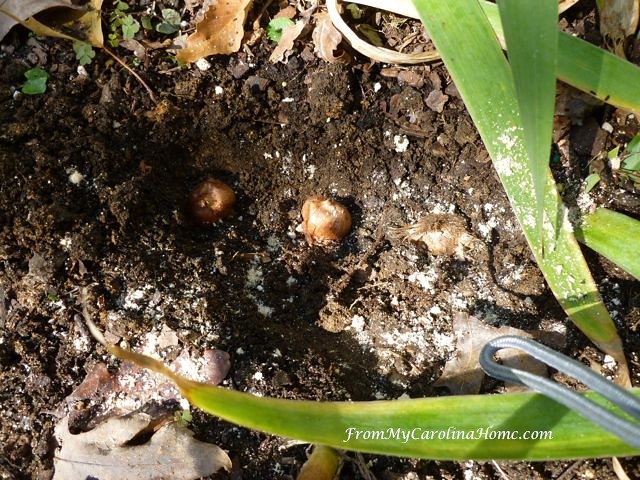 Hyacinths were planted in a random pattern in the middle of the front bed, scattered just like nature does.  I am hoping for a fragrant display in the spring. 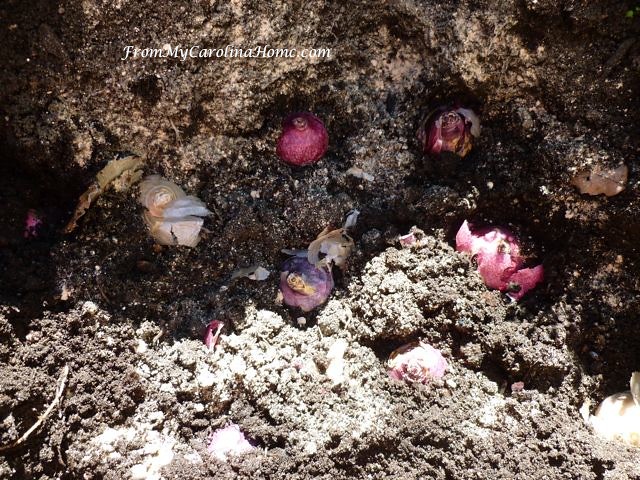 Then I put the pale peach ruffled daffodils in the brick planter between the asters and the irises there. 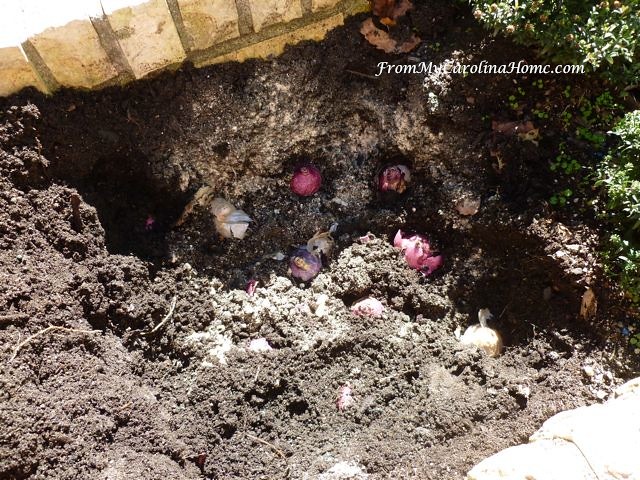 Next thing I knew, looking at the planter the next morning, the bloody squirrels had dug up some. I had wanted to put some green plastic fencing over the bulbs, but thought I had another day to get it done. So, I fixed that.  The fencing did keep the squirrels from digging in the bed after that, although DH noticed one sitting on the brick looking at the fencing like he was trying to figure out what to do next. 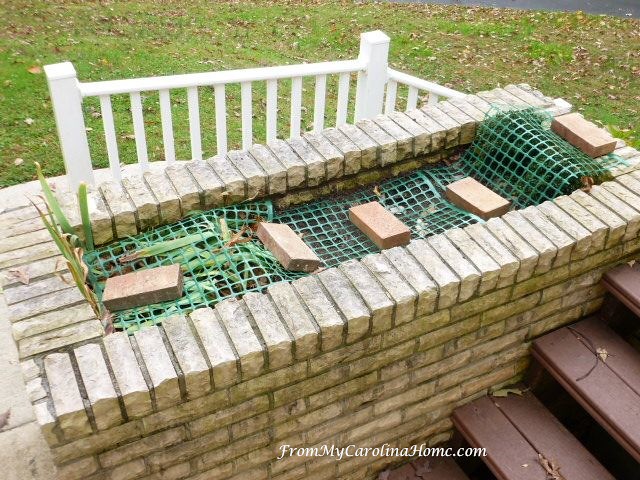 Look who stopped by, a beautiful young deer.  This photo was taken through the screening from the Carolina room on the backside of the house. 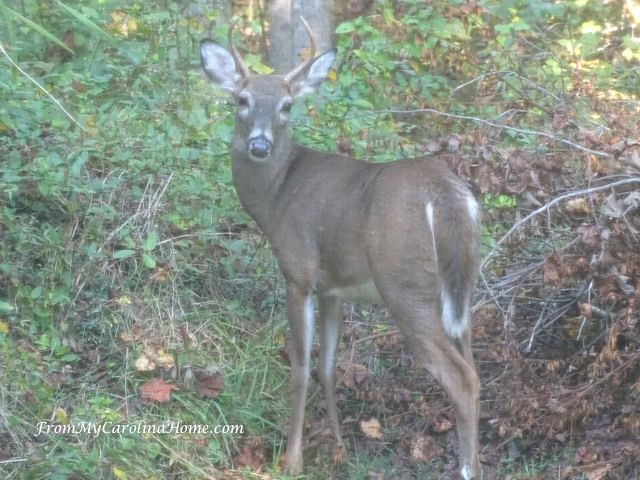 Very young, likely born just this past spring, his antlers are just beginning. 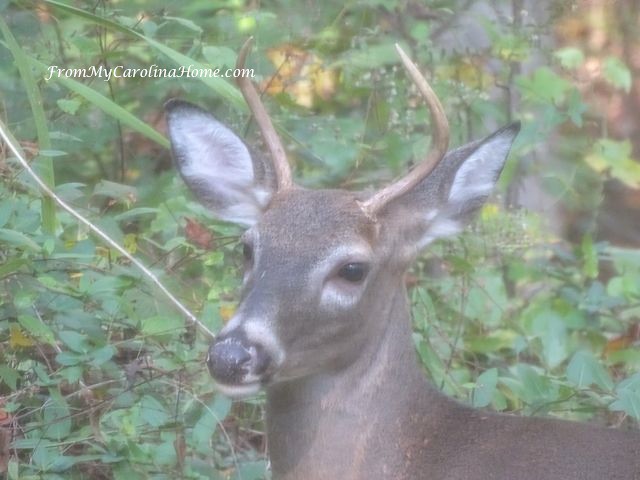 His family has been eating my hostas, but I don’t mind at this point. They will die off soon anyway. I planted more crocus bulbs between the hostas. I have one little clump of them there now, and wanted to add more. 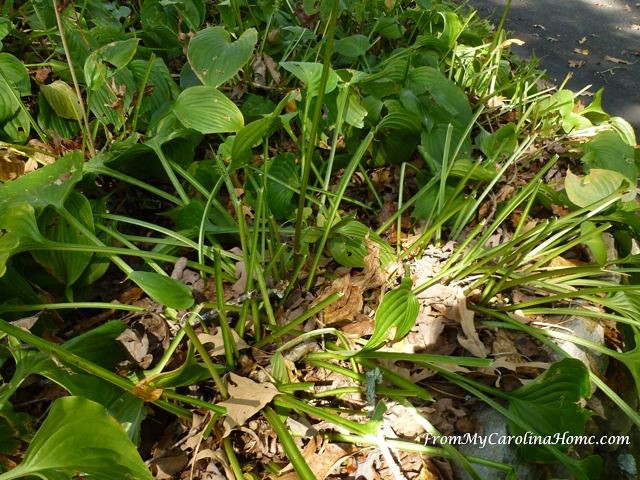 The island of land created by the circle driveway needed some color. There are azaleas there, but I have wanted to add daffodils there for some years. I planted gladiolas in this spot years ago but they never came up. I suspect the squirrels dug them up and ate them. 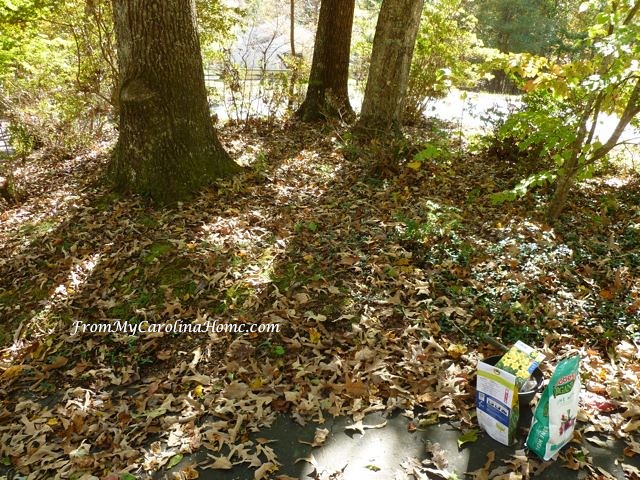 Bigger bulbs meant deeper holes, plus this area has a ground cover of vincas making the digging more difficult. 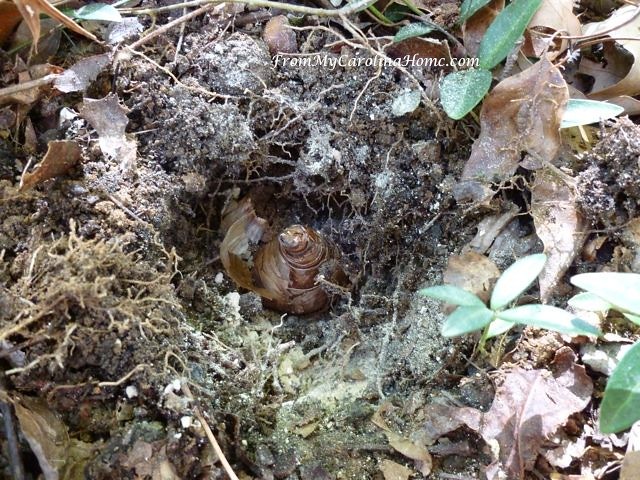 Down on the south side of the island, I planted more daffodils in this open area where I had some azaleas taken out a couple of years ago. 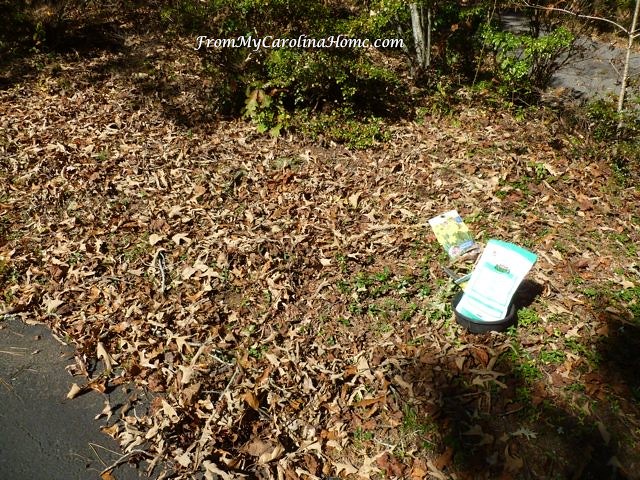 In another area of the garden, I created another stand of daffodils. All total, I planted 155 bulbs, and we will see how they do come spring. 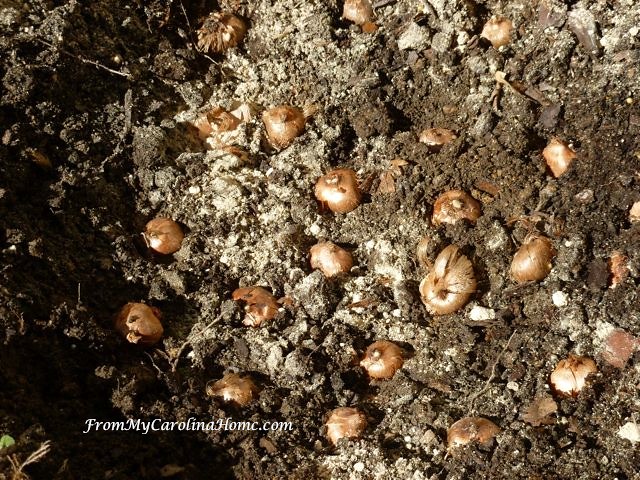 Up on the veranda, I planted a gold chrysanthemum in the large pot next to the front door. The torenia baskets were finished, and looking bedraggled so they were taken down and the plants removed. 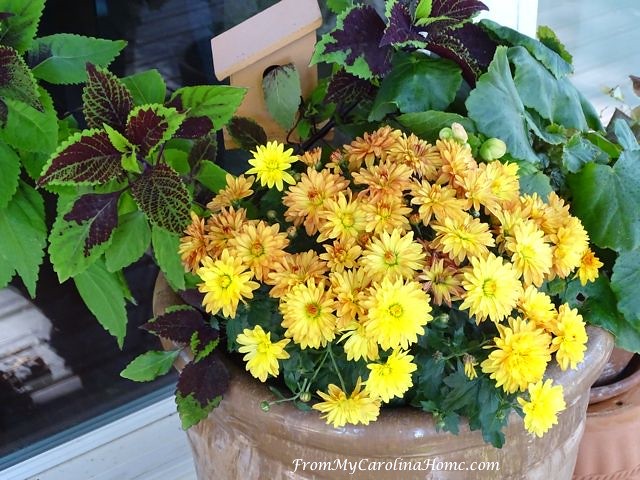 There was a frost in the forecast, and my tomato plant was still heavy with tomatoes.  So I picked them all, and pulled up the plants to clean up the pots. 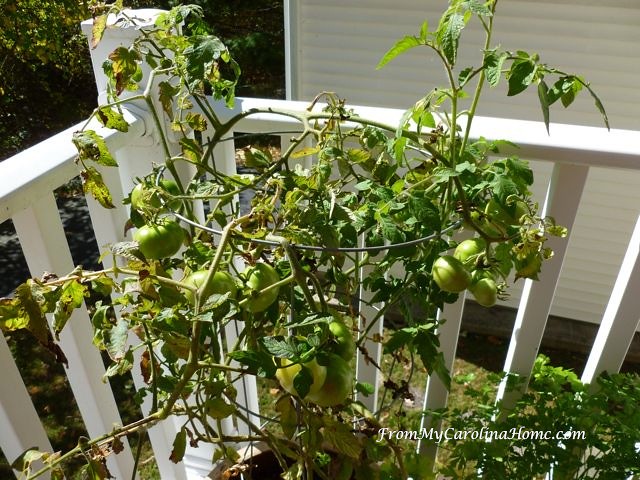 I put them on a plate to ripen inside. Some may never ripen, but that would be OK. 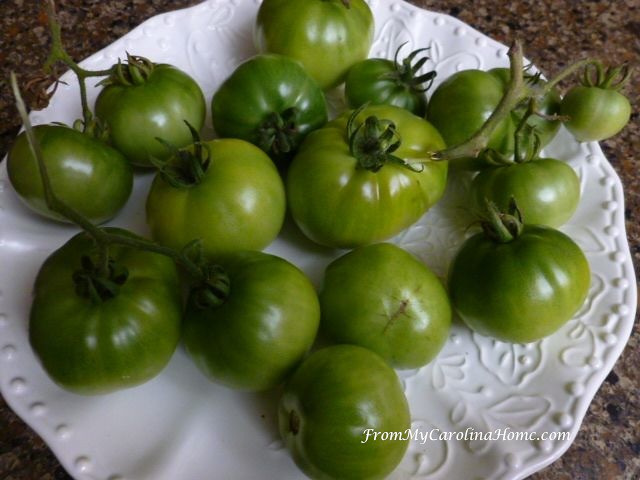 Amazingly, days later, one had fully ripened and others were looking like they were coming along. It has been nice to eat them as they ripen, and there are more to come. 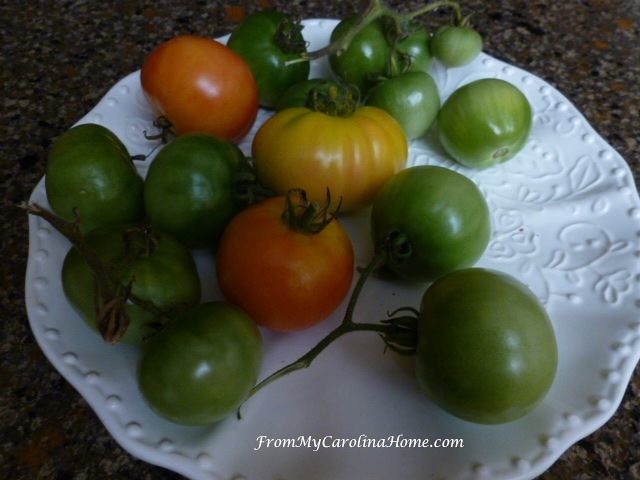 Moving inside, the Thanksgiving cactus bloomed with just five blooms total.  I repotted it this fall, so that might have made a difference.  Here, three red and one pink bloom came out first. 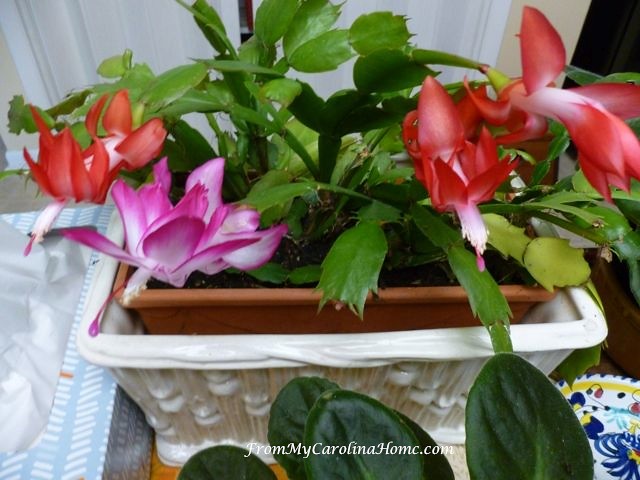 One white one came out later. 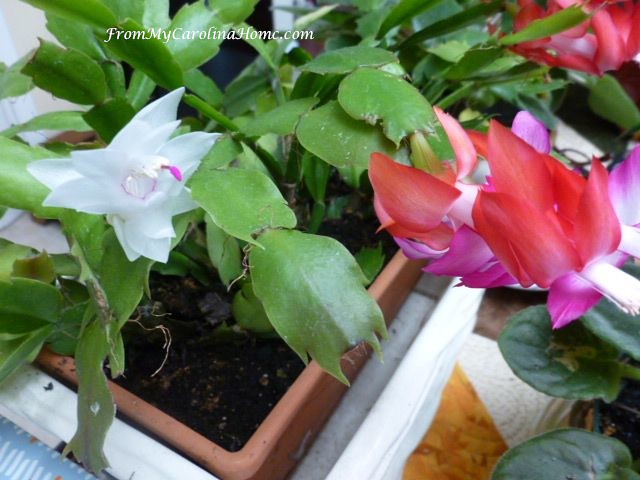 A month ago I bought a white amaryllis, you all know I love white flowers. Just days after potting it up and watering it, several leaves had grown and the bud was coming up. 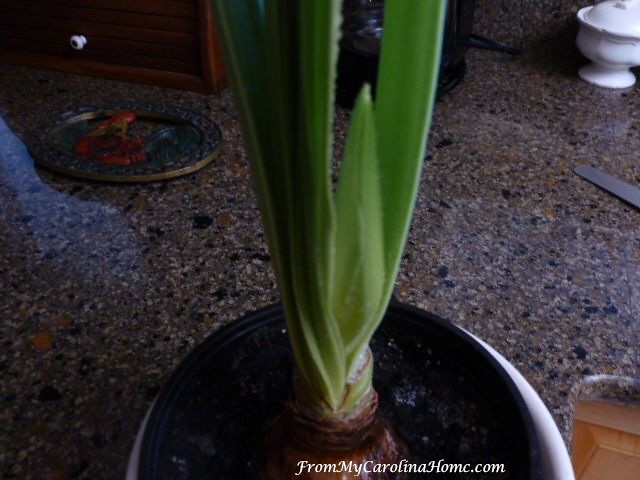 A few days later, the bud is getting taller on the stem. 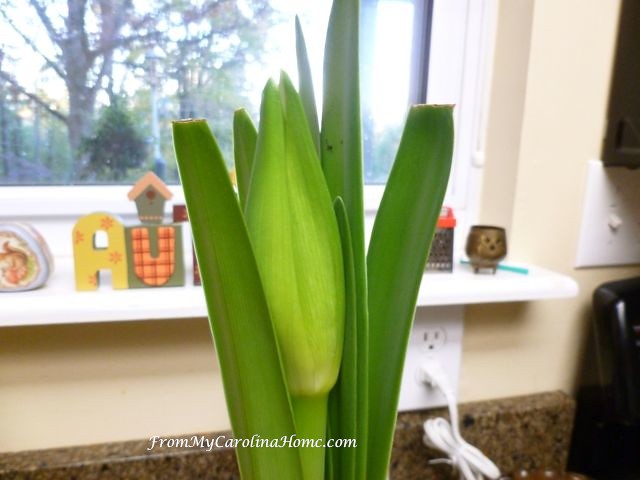 And this past weekend, a beautiful flower is opening with the promise of three more to come. 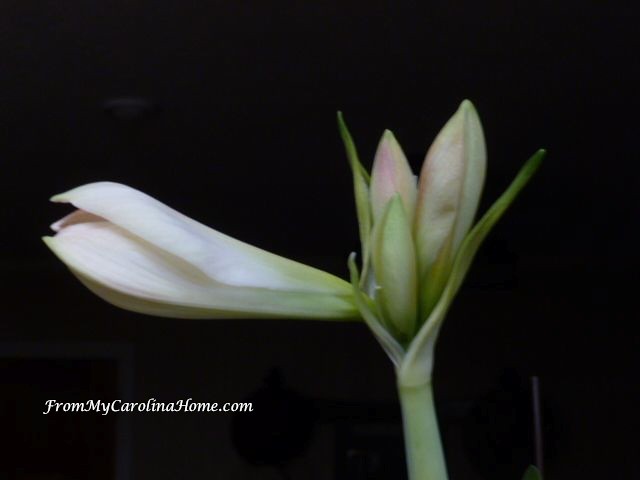 Gorgeous isn’t it, this white with a pink blush is called Appleblossom. 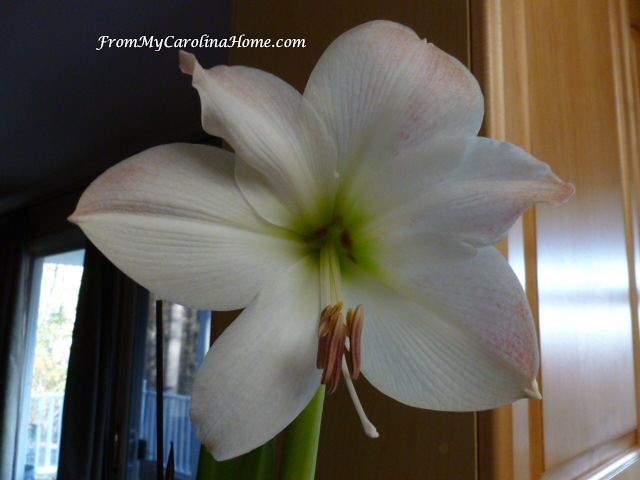 Outside, the trees have come into fuller color, and the bird feeder is in full use. 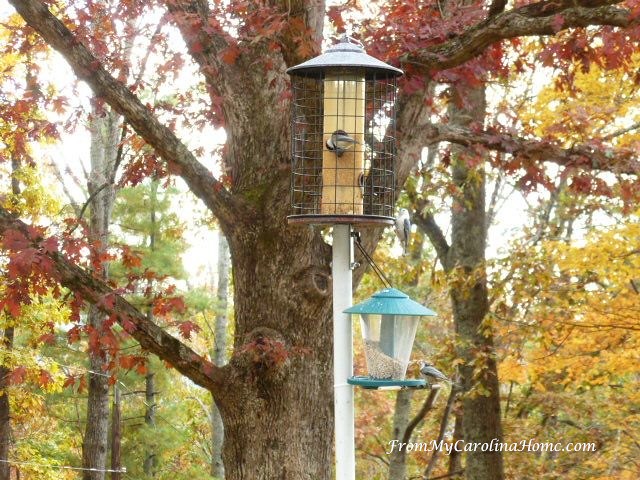 Looking down the driveway, nice golds and oranges in view. 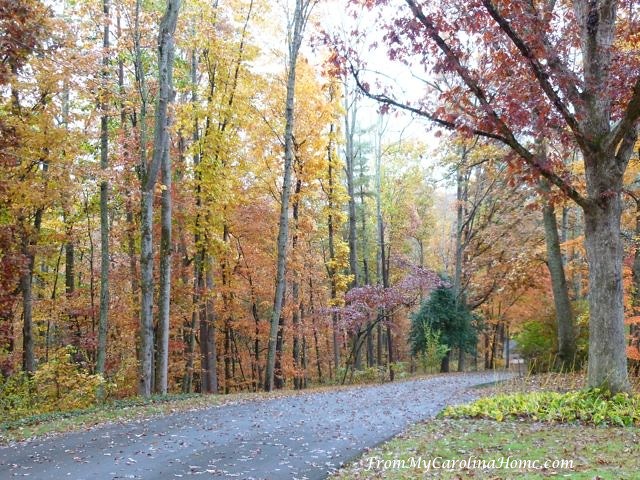 Looking over the house to the mountain behind and the very tall trees that surround us. 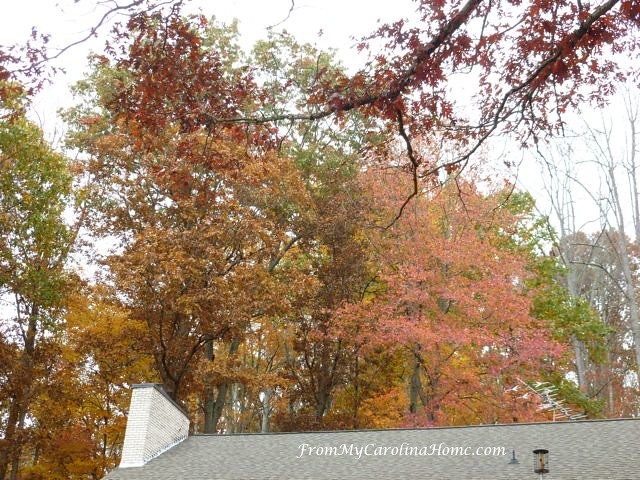 There is still a bit of green yet to change, but overall it is autumn here. 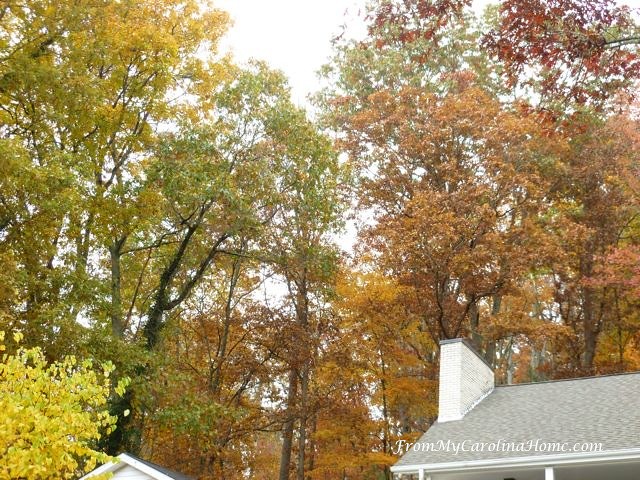 Here’s a look at the meadow, lovely! 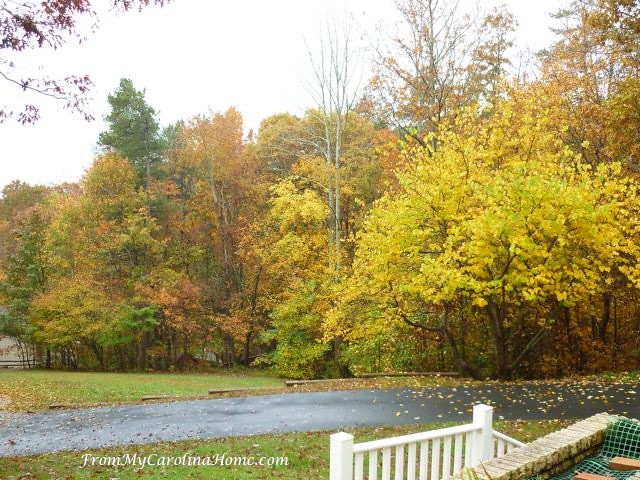 I haven’t seen the turkeys in three weeks, and I think they have moved on for the season.  I wish they would come back as I love watching the males fluff and preen for the females.

What is going on in your garden now?

20 thoughts on “November in the Garden”