This weekend the colors on the Blue Ridge Parkway are finally reaching their peak, and are past peak in the highest elevations.  Friday was going to be clear and comfortable for hiking, so we thought it would be the perfect day to see the lookout tower on Fryingpan Mountain.  Driving up the Blue Ridge Parkway was a joy, a vacation in an afternoon with the gorgeous colors along the road. 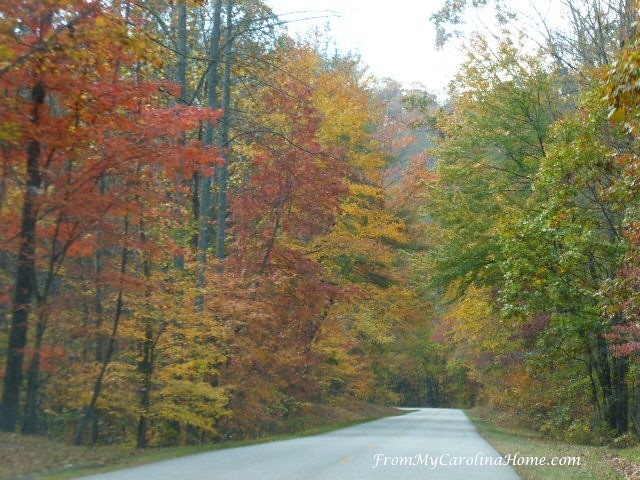 There is a small parking area at the entrance to the trail, maybe a half dozen cars can park there. The entrance is at mile 409.6 if you are in the area and want to see this amazing view. 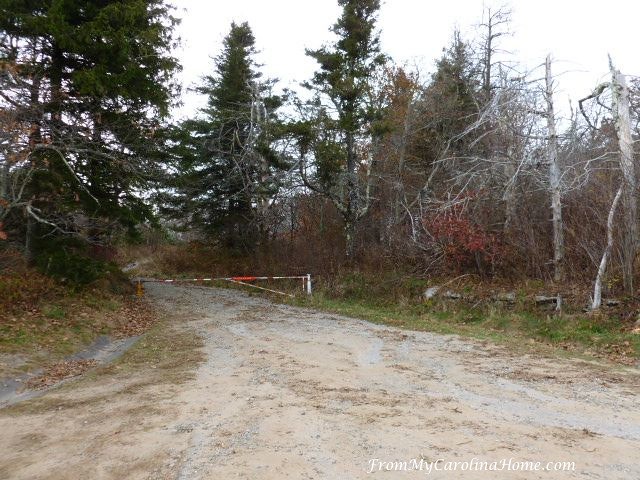 The trail is actually a gravel road, so much easier to hike than the ones over tree roots. But the challenge is the elevation, it goes fairly steep in some areas.  The good news is that the hike is only a mile and a half round trip. 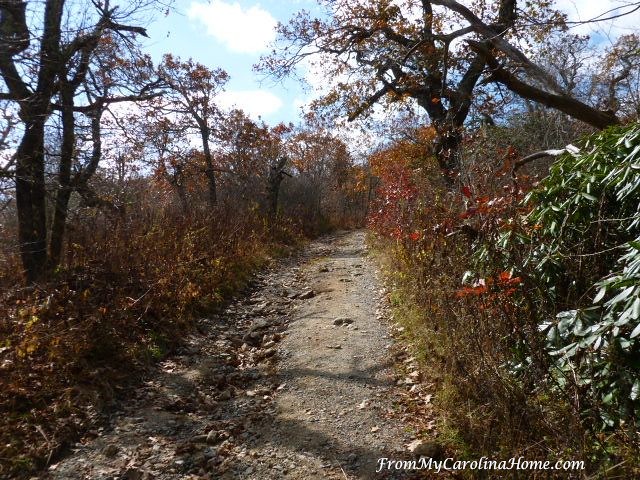 Fryingpan Mountain got its name from nearby Fryingpan Gap. The story goes that the gap was named for a frying pan that was always hanging in a tree. Another story says the nearby stream was shaped like a fryingpan at the entrance to the gap. 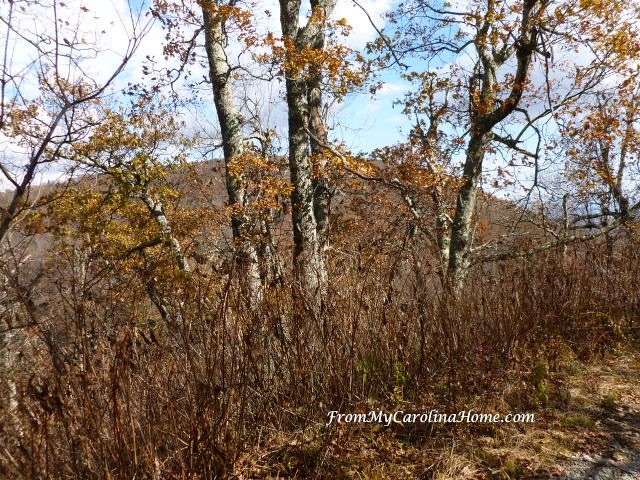 Along the way, there are interesting forms in nature with moss covered rocks. 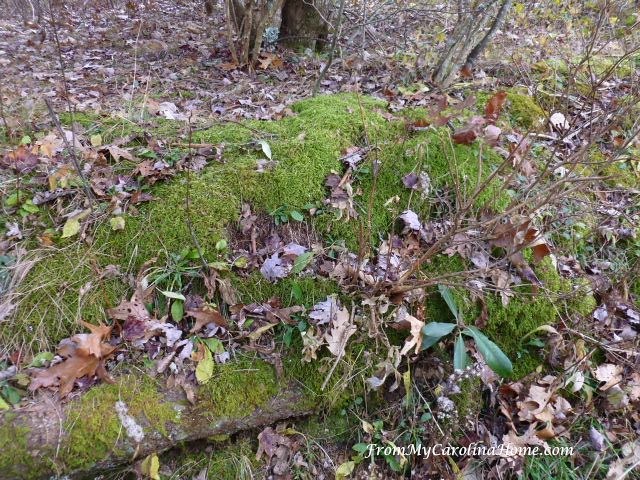 The mountainside still had some pretty color even though a lot of the leaves have been blown away by recent storms and wind. 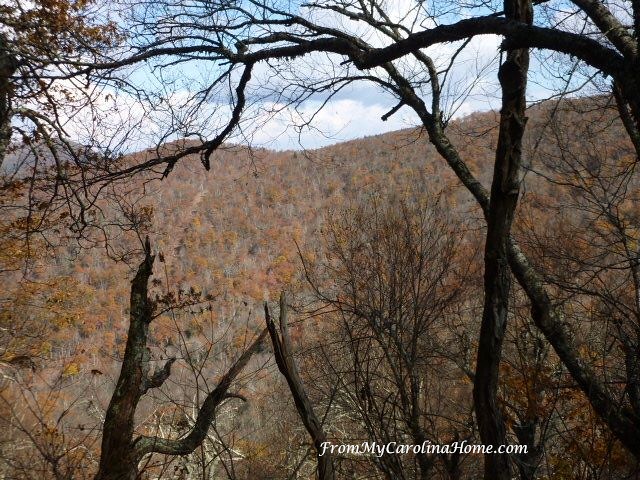 We kept going up, enjoying the fresh air and the beautiful day. 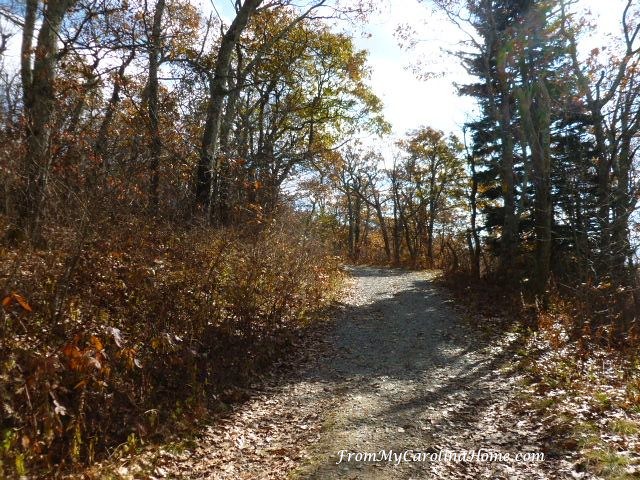 Artistic forms abound in nature like this fallen tree.  The moss growth on it shows it has been here a while. 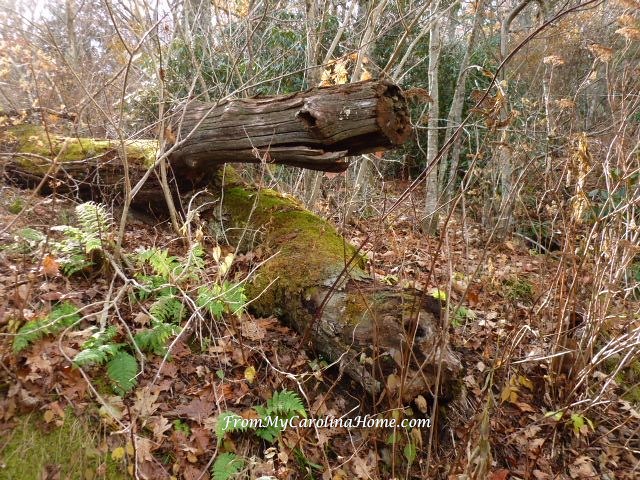 Clouds were rolling in, with the threat of a shower, as we came over a rise and could see the tower in the distance, with one more hill to climb. The tower was built in 1941 as a lookout tower to watch for forest fires, one of the first ones made of steel.  The parkway was under construction and there were a lot of towers built on peaks to monitor the new national forest preserve, but early ones were mostly made of wood and were torn down later.  About a third of the towers are still standing and open to the public, but the rest have either been torn down or had their stairs removed. 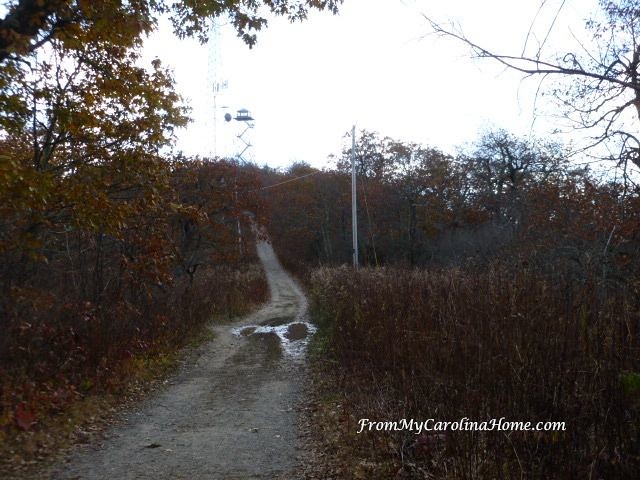 Arriving at the summit, we are at 5340 feet above sea level. There is a weather station here run by North Carolina State University. They have a website where you can check the weather anytime and it updates every hour. Click HERE to see what the weather is doing now. 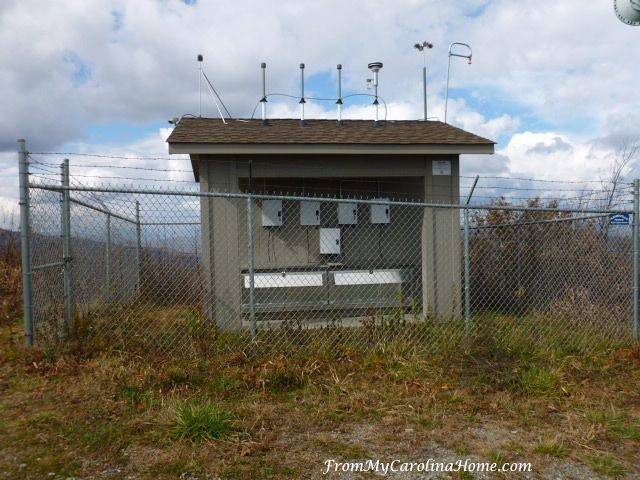 The United States Forest Service was formed in the early 1900s to help protect the public lands across the United States.  They built towers to scan the horizon for smoke, dispatching crews to anywhere there was smoke.  This tower is 70 feet high, but the observation deck at the top is locked. You can climb up to the landings for stunning views. 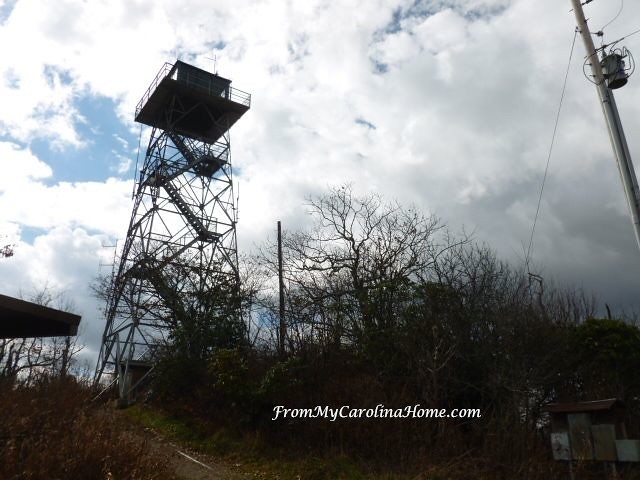 The colors were more vibrant as the sun broke through the clouds.  Rangers staffed the station from the 1940s – 1990s to look for smoke from fires, both with naked eye and binoculars.  This had to be monitored constantly.  The development of cell phones and satellite surveillance with the ability to detect smoke have made the towers obsolete. 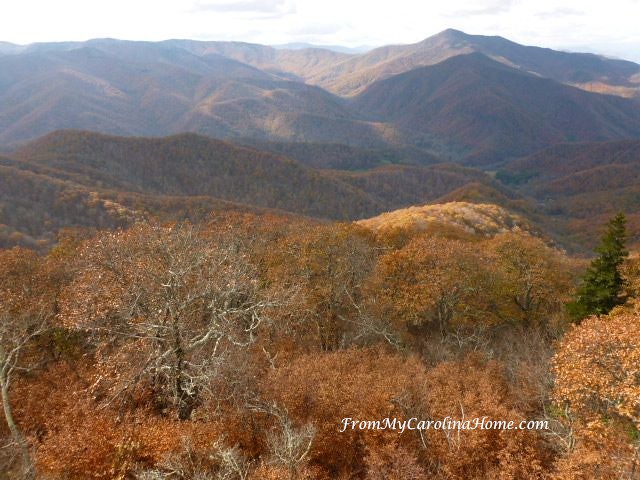 This is the tallest tower in western NC so the views are stunning.  It hasn’t been in use since the 1990s, but is listed on the National Register of Historic Places. 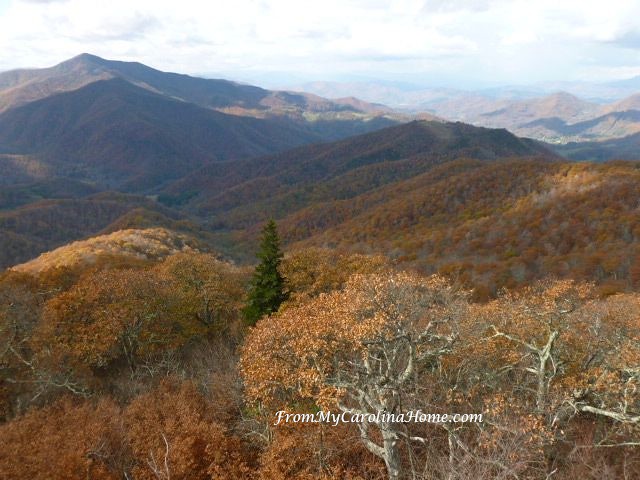 Going up another level, this is Looking Glass Rock in the distance. 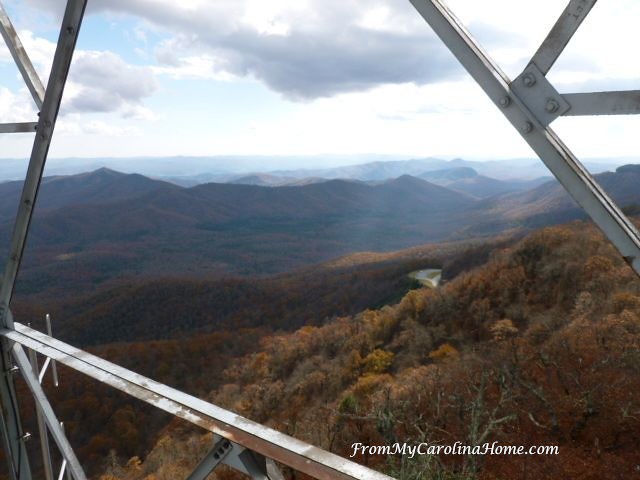 I used the zoom lens to get a closer look at Looking Glass. 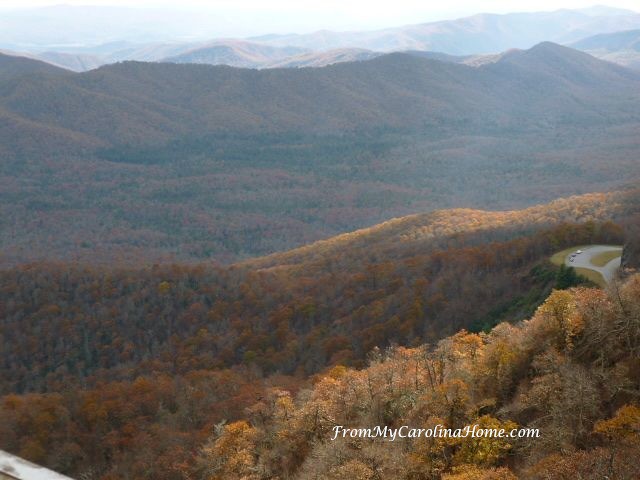 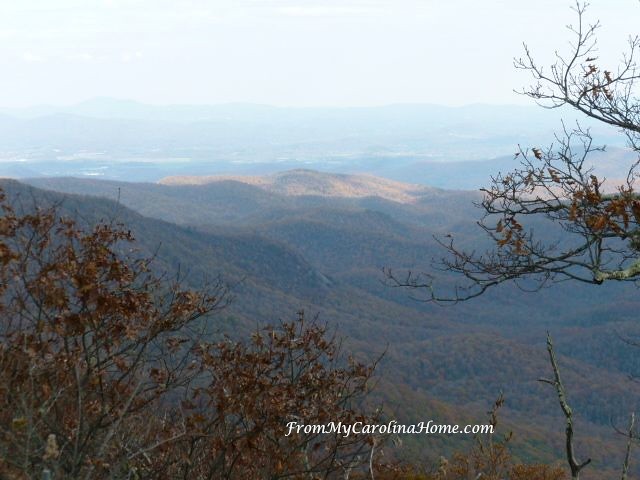 As the sun broke though the clouds here and there, the colors started to shine.  It is so difficult to show in a picture the glory of what our eyes could see. 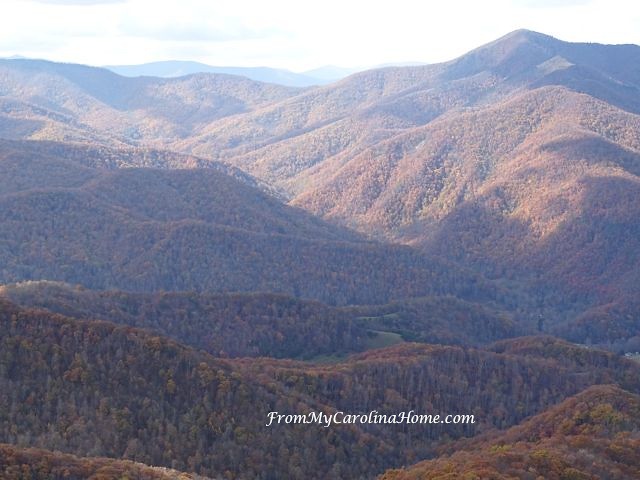 Every direction had color, 360-degree views. 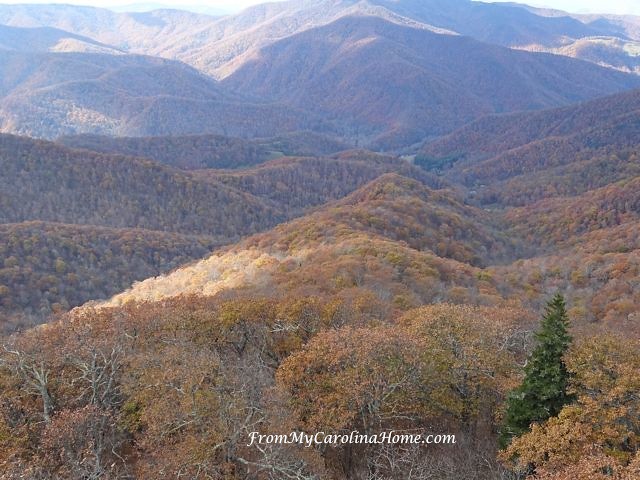 That is the Blue Ridge Parkway below, going around Mount Pisgah. 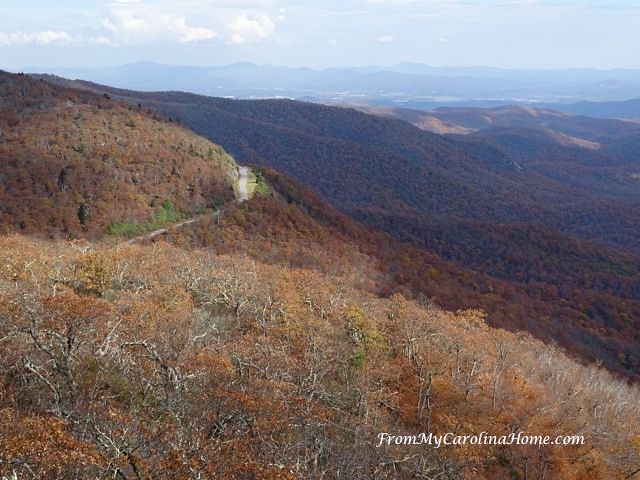 Another view of yet more mountains and color.  The high peak in the middle is Cold Mountain just 5 miles away as the hawk flies. 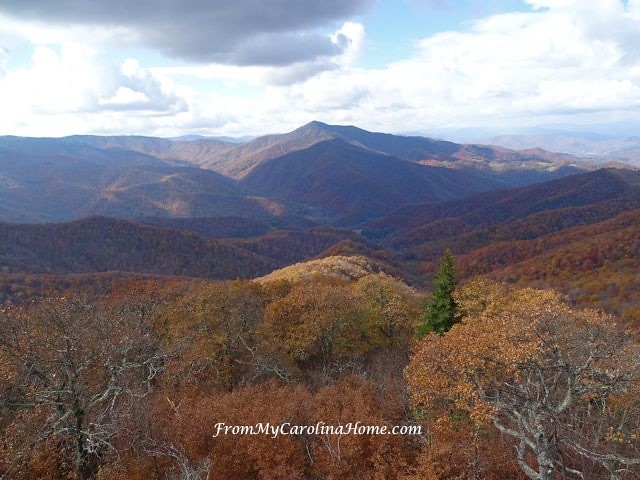 Looking down through the tower, the views continued to be beautiful. 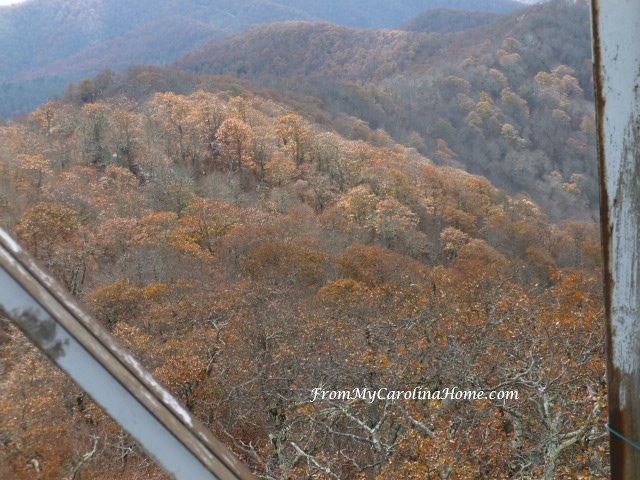 I wasn’t nervous about the height, that usually doesn’t bother me, until I began looking down. 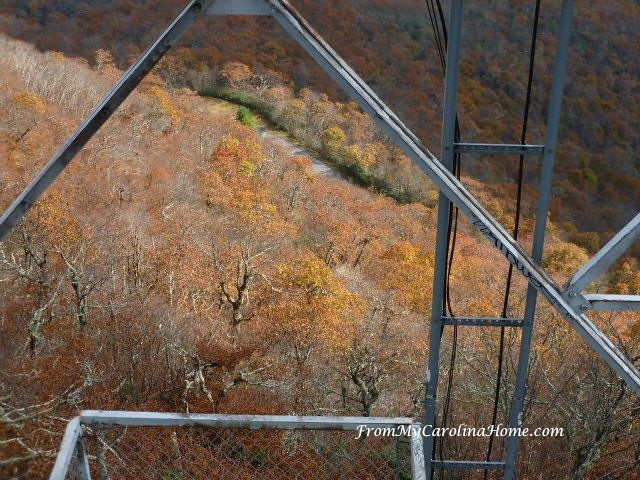 It is gorgeous, but those stairs are a bit unnerving going down.  All of a sudden the realization that these steps are steep, narrow, metal and see-though, is a little disconcerting. 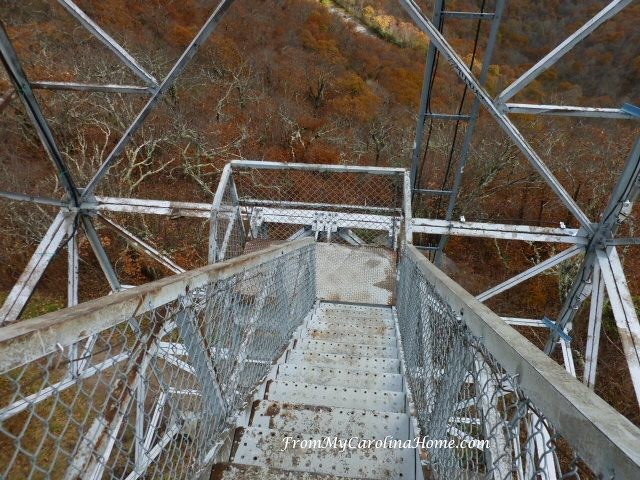 Going back to the car was a lot easier, it was downhill the whole way. 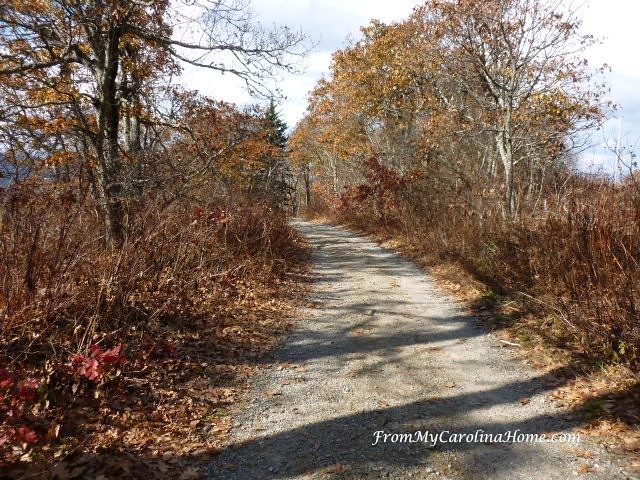 Near the end, we heard a small stream and stopped once again to appreciate the beauty of nature. 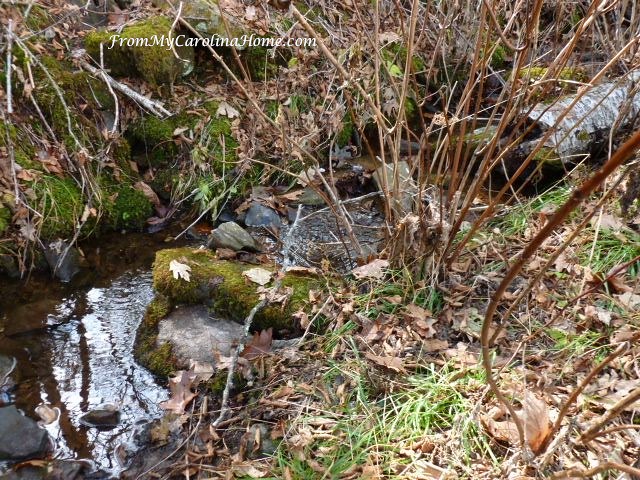 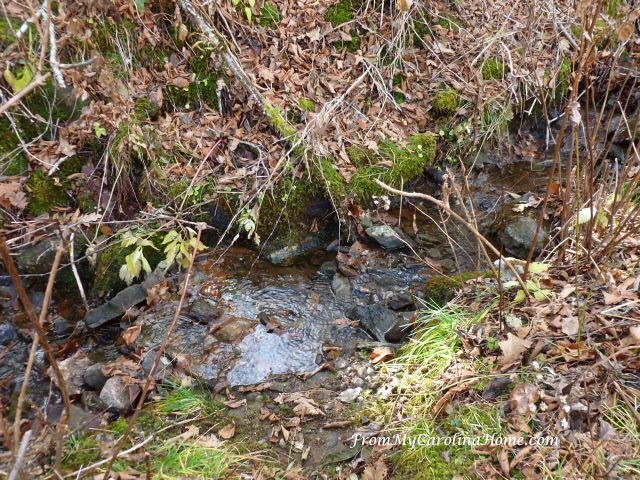 Driving back home, one more view from an overlook.  The beauty of the parkway was stunning, and I’ll have more on that next week. 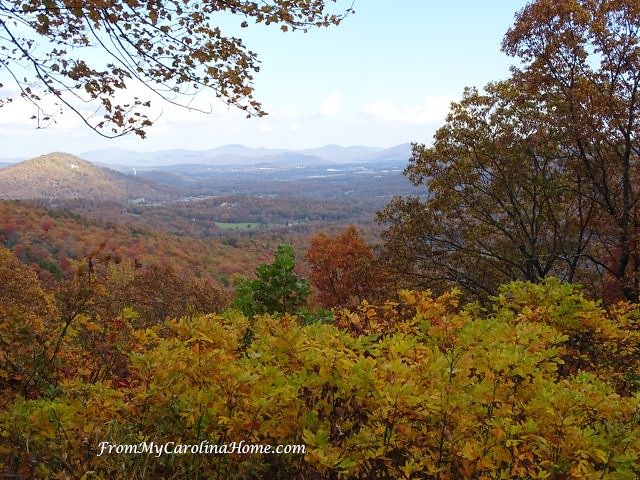 Is there autumn color where you are now?  or spring flowers for my southern hemisphere readers?