On a recent trip to Raleigh over a weekend, DH and I spent an entire Sunday at the Museum of Natural Science downtown.  Sunday was a great day to go, parking was easy, traffic was low, and the cafe was open before the Museum so we could have lunch before the visit. Two multi-story buildings connected by a sky bridge contain more than you can see in a day.  The world globe was three stories tall! 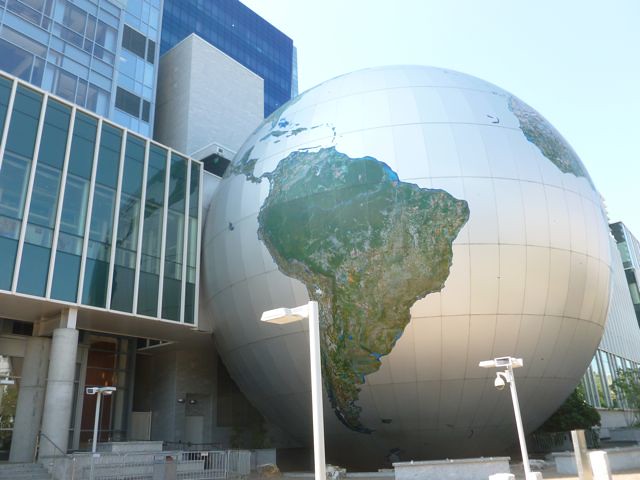 Starting off on the first floor coming out from the Daily Planet Cafe, the first thing you see is the giant Right whale skeleton. There was so much to learn about whale migration, the study of their life habits, and how this study contributes to the efforts to make our impact on them less dire. This whale was one that researchers had been following, and she died from massive trauma to her head, indicating she was struck by a ship. The researchers had documented her dozens of times and the loss felt personal to them. 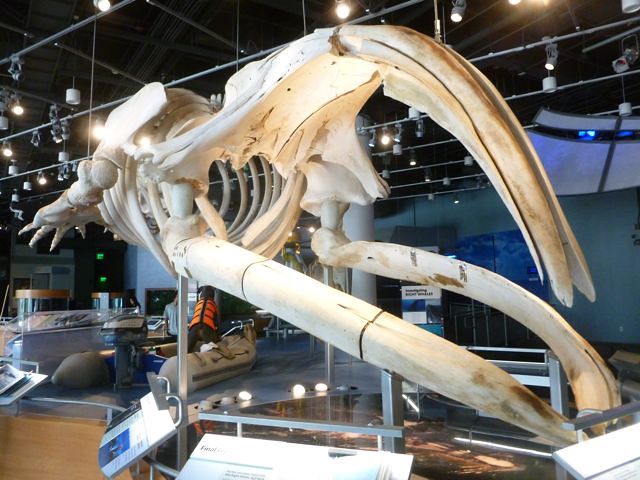 Especially sad was that she was pregnant at the time of her death, the fetal skeleton seen in the exhibit in the position it would be in her body.  It takes almost a year for gestation and females only bear one calf every three years.  There are only a few hundred Right whales left in the world, so figuring out how not to kill them is important.  Their migration courses and our shipping lanes follow the same ocean routes. By analyzing data on whale migration routes, shipping lanes and ship speed, it was found that ship speed makes a difference. Slowing the ships down successfully dropped the collision death rate with Right whales to zero the next year! 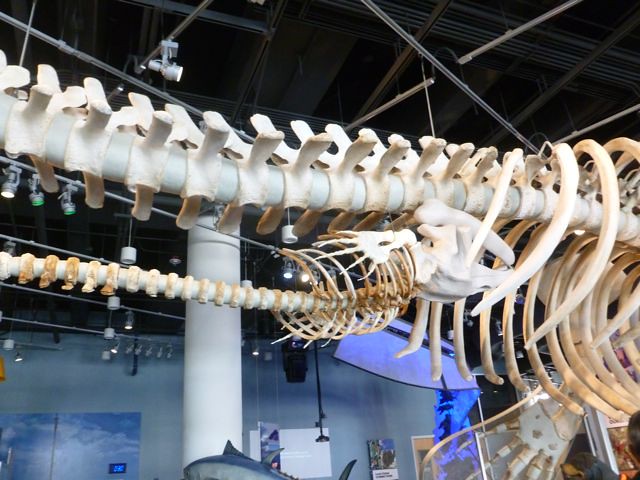 It was interesting to see a T Rex skeleton, although this one is a replica.  This would have been a juvenile in size. In studying the bones, scientists have changed their view of how it walked. Where they used to believe that the dinosaur dragged its tail, they now believe that it held the tail high like a bird, balancing the front in a more forward leaning posture.  Did you know that scientists now think that most dinosaurs had feathers, or quill like coverings rather than scales?  A find in 2016 of a dinosaur tail covered in feathers and preserved in amber confirmed the theory. 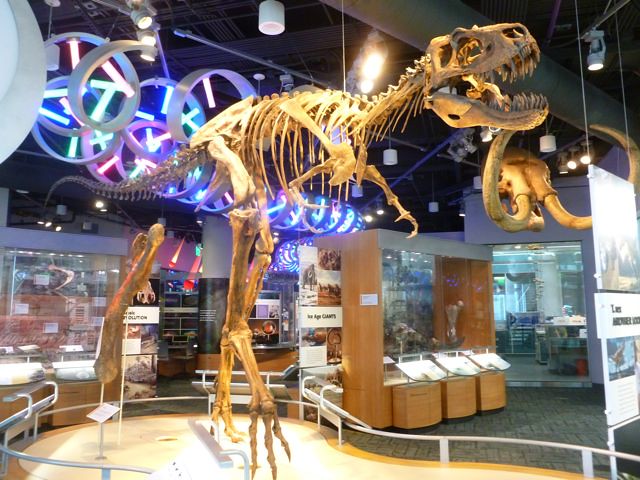 It is generally believed that our modern birds evolved from dinosaurs, interesting!! 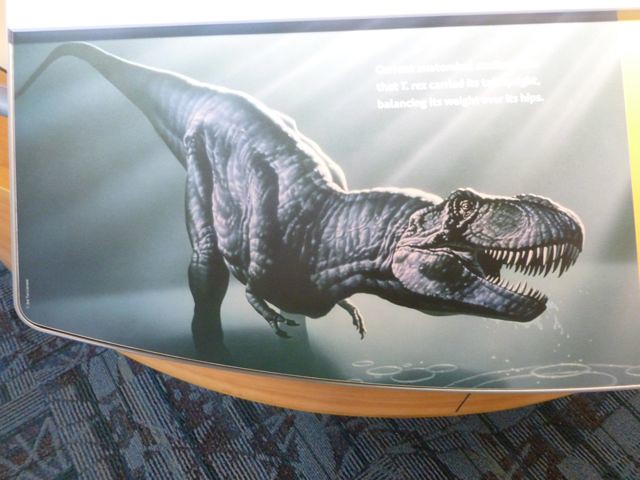 There is a working laboratory for fossil study right there on the premises, and you can watch them working during the week. 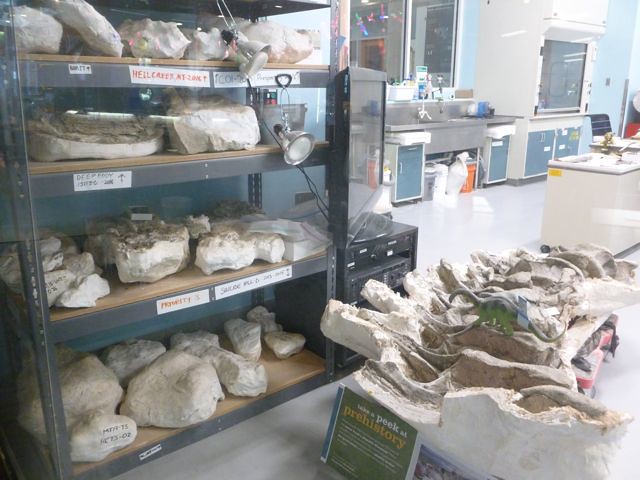 Also in that area, an exhibit of skulls with cards telling the observer the type and relative age, both human and ape. 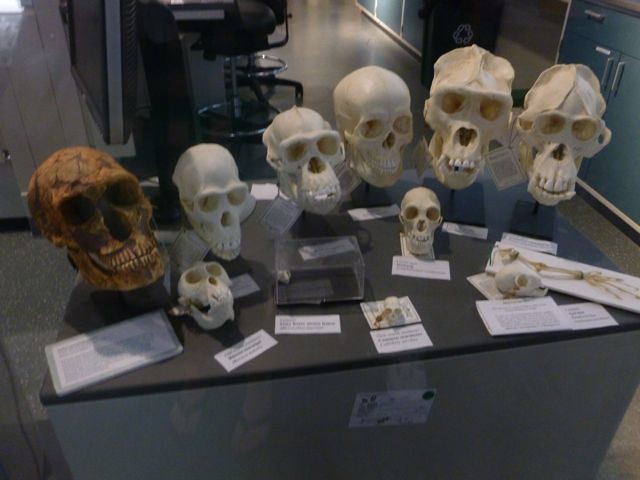 This strange exhibit caught my attention as it depicts the relative size differences between several bacteria and viruses. It was one of many interactive exhibits dealing with physical biology of humans. 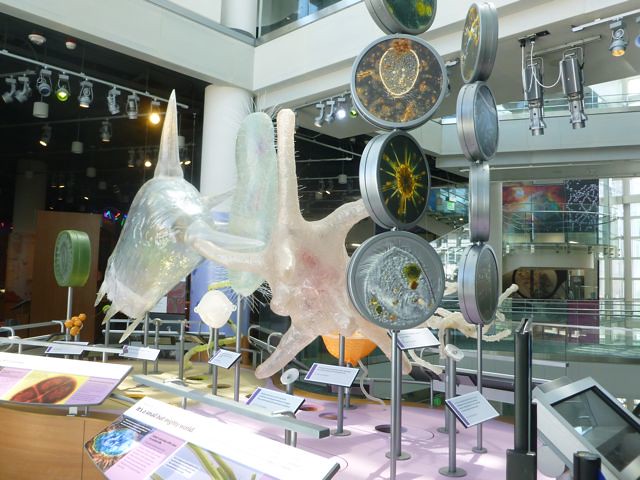 Overhead was a huge depiction of DNA, with many exhibits to read and see. One thing that made it so interesting was the level of writing, not too simple, not too complex, just drew you in with interesting facts presented in a compelling way. 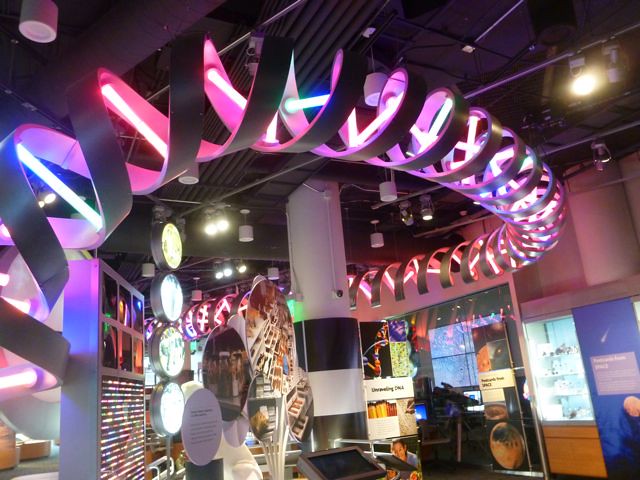 Then, the exhibits moved into space, with fascinating exhibits of galactic study, so much to learn!!  Fascinating exhibits on radio waves in space, water on distant moons, the character of light coming across our galaxy, billions of stars with orbiting planets, it just boggles the mind. 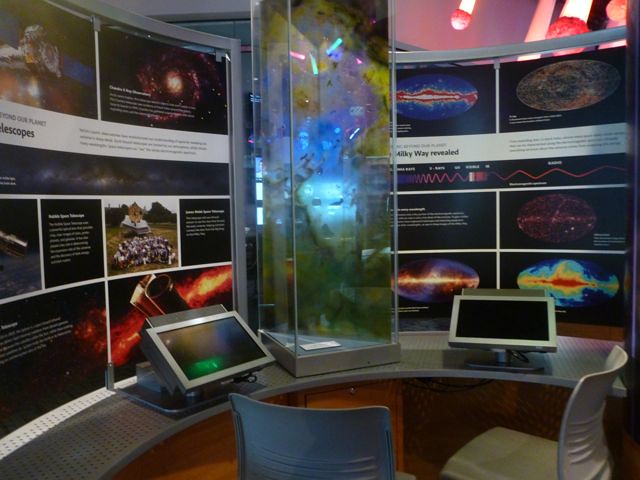 This is also a working laboratory, studying the moon, asteroids and meteors. 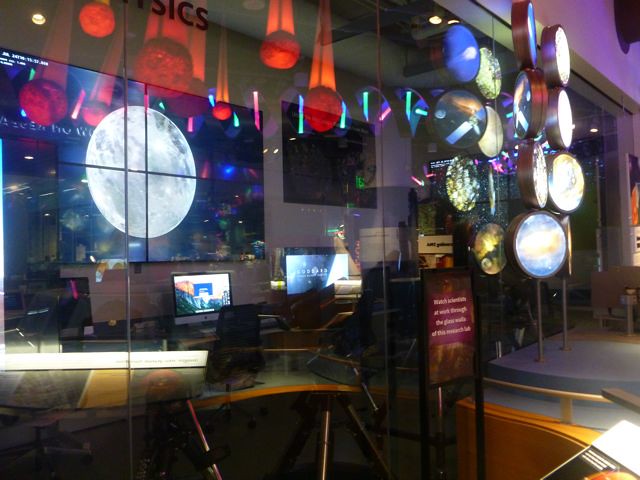 Walking across the sky bridge, we crossed over to the second building. We hadn’t seen everything in the first one, yet, but I wanted to be sure to see the T Rex skull they had so we went to look for it. The sky bridge was on the third floor, and we could see the upper part of the globe there.  Walking across the bridge, you went forward in time from the earliest prehistoric time to more recent recorded history. 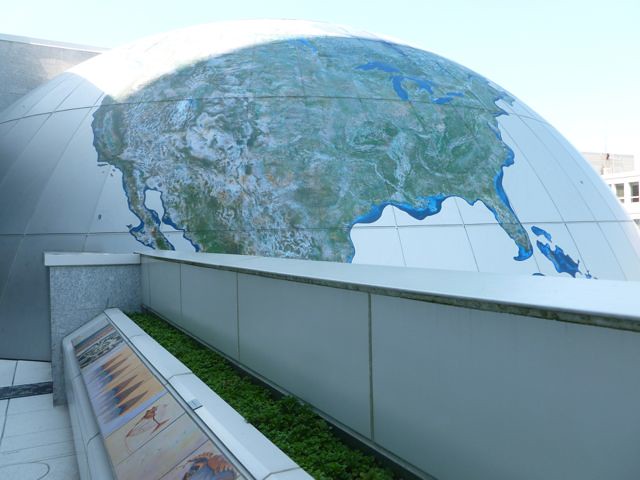 If you enjoy non-fiction, here’s a book on the legal fight over the T Rex skeleton found in 1990 in South Dakota called Sue.  Found by a paleontologist, fought over between factions of the Native American Sioux Tribe, universities, corporate interests, museums, scientists and the federal government, Sue was the subject of a legal battle then an international auction. One of the placards talked about this, and I have seen a television show on it.  The book looks really interesting, reading a bit on the preview at Amazon, (Affiliate link) it might make a fun gift for the budding scientist, legal thriller fan or the history buff.

Tyrannosaurus Sue: The Extraordinary Saga of Largest, Most Fought Over T. Rex Ever Found

Another huge exhibit in this building was on the seas, and the Blue Whale. This is the view of the smaller skeleton from above on the third floor. 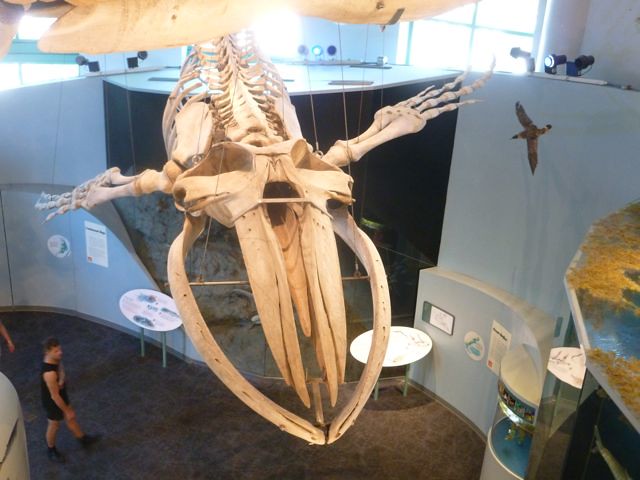 And the same skeleton from the second floor. 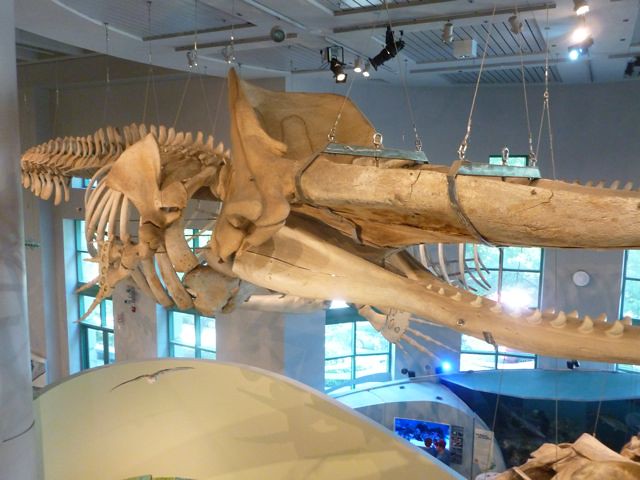 Trying to give you the sense of the huge scale of these bones, here’s the view of the larger one from the first floor, with the smaller one seen behind it. It was interesting to read that the darker color on the skull portion is due to it still having the oil in the bone. Once considered valuable, the Blue whale was almost hunted to extinction for its oil. 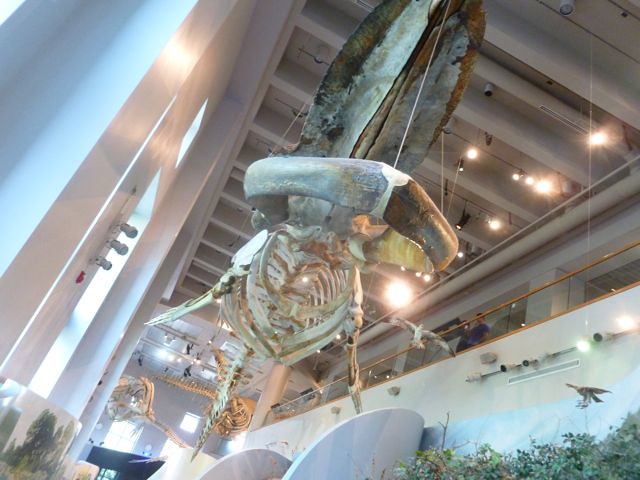 An atrium contained a battle scene of dinosaurs, with a huge brontosaurus. 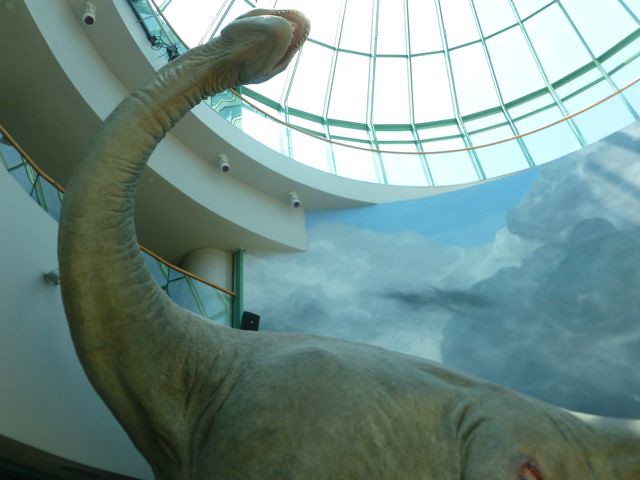 and a large Acrocanthosaurus skeleton.  The placard next to it says, “don’t call it a TRex”. 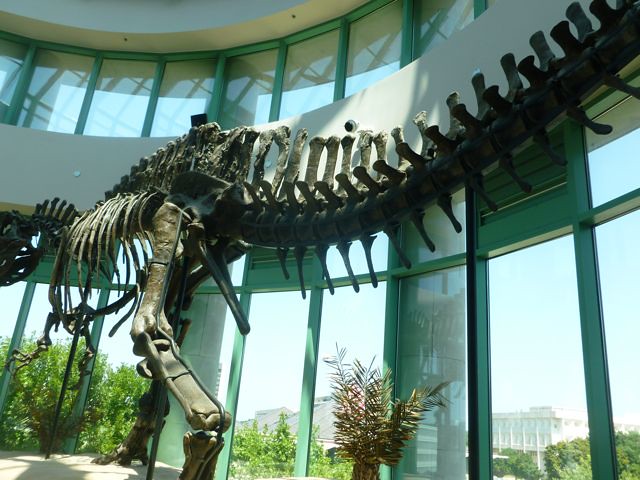 This skeleton is very rare, the only one of its kind this complete on display in the world.  Due to the continued deterioration of the bones from to exposure to air, most of it has been replaced with casts on the display, with the bones taken to controlled storage.  The mounted skull is a cast, with the real one under glass below.  Its skull looks a lot like the T Rex, but it lived 45 million years before T Rex.  Originally the skull was found flattened, but painstaking restoration included taking the bones apart and reassembling them in the proper place and took a year to complete. 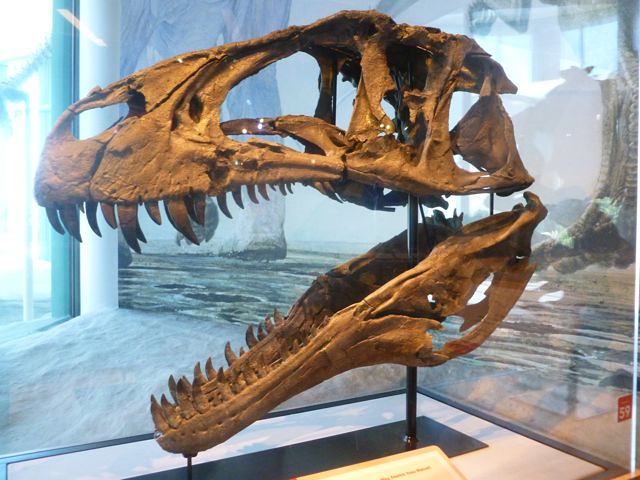 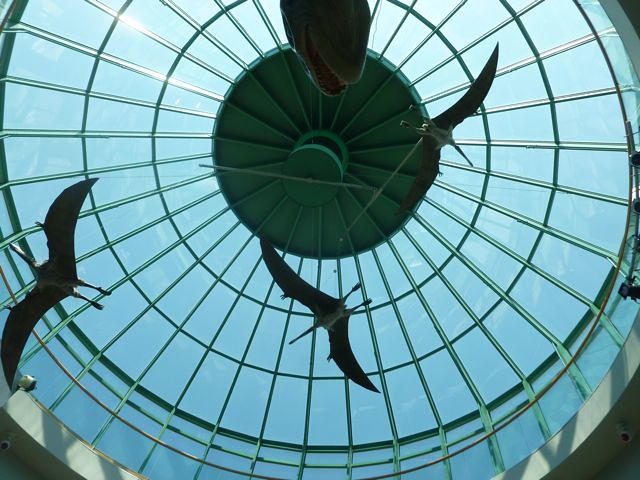 When we found the next exhibit on fossils, I thought we were close. 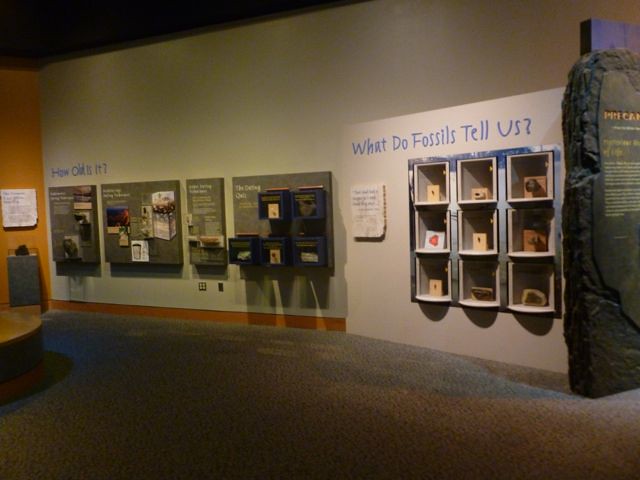 Here’s the T Rex skull, I think it is a cast replica.  I never did figure out how the paleontologists tell the difference between T Rex and Acro. 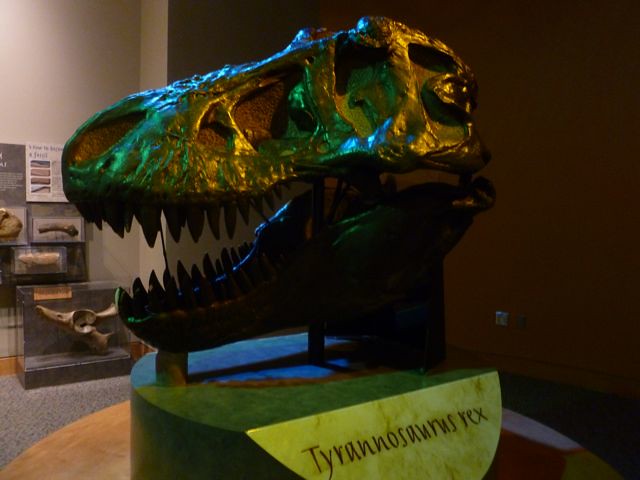 As is usual, I took more pictures than is reasonable to show. Tomorrow I’ll show you more of the museum, dedicated to North Carolina’s ecosystem and history. It was fascinating too!

Do you have a wonderful science museum near you?

12 thoughts on “Museum of Natural Science in Raleigh”