Last week, DH had to go to Lexington, Kentucky to do some work, so once again I packed a bag and tagged along.  I had a fun time shopping and sight seeing while he was working. Lexington says it is the horse capital of the world, with much in the town being about the horse. There are horse farms, a horse racing track, an entire park dedicated to horses and Man O’ War, and many of the streets are named for race winners or tracks.  I took over 300 pictures, and I promise I will not show them all to you, LOL!!  But today, come with me as I shop and eat, visit quilt shops and bookstores, and have fun in Lexington. 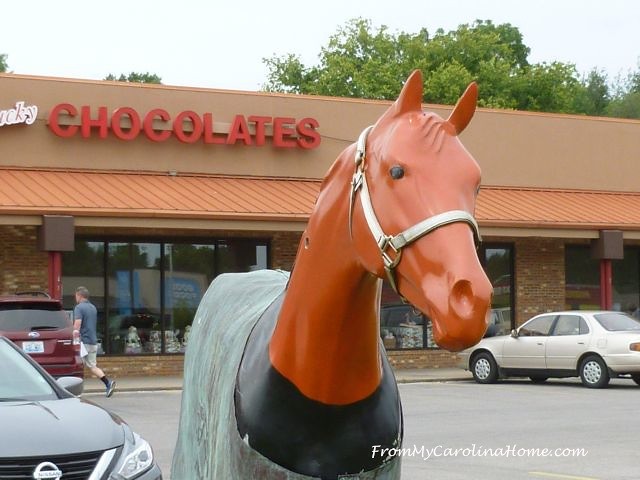 In some places in town, there are horse statues painted by local artists that were apparently part of an art project some time ago.   We do the same thing here with our bears every year. I only found four of these horses, but this one was the most compelling, did you see what was behind it in the picture above? 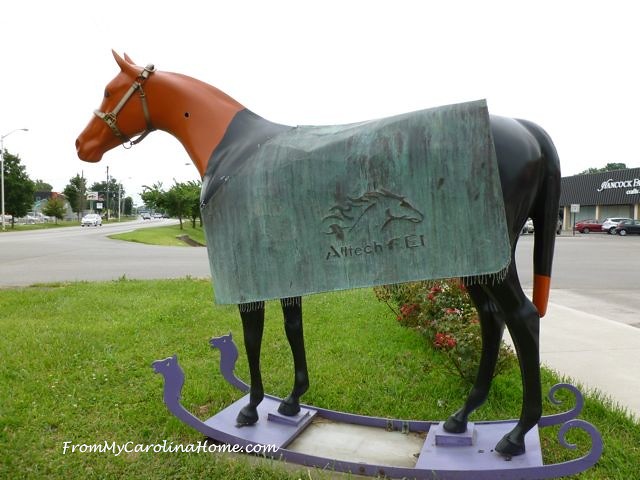 Oh, yes, a Kentucky institution, Old Kentucky Bourbon Chocolates. Every last bit of this store was chocolate! The aroma of freshly worked chocolate hit you as you walked in, there was no way to leave without having some. 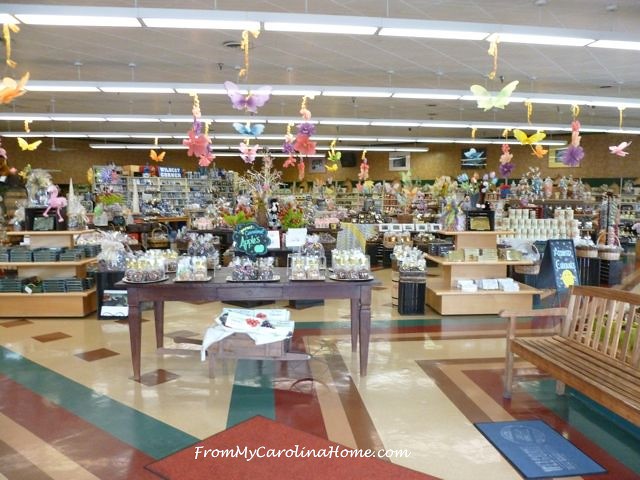 A couple of free samples later, I decided on a large box of Bourbon Truffle Chocolates, and two little samplers. One of the samplers was Black Forest Truffles (bourbon, chocolate truffle with chopped cherries), and the other was Chocolate Covered Bourbon Cherries. I am carefully rationing these out, excuse me for a moment while I go nab one, my treat for today. 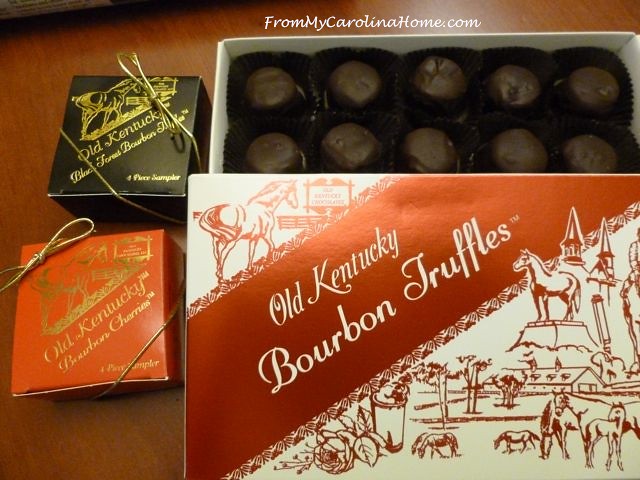 This horse was across the street from the chocolate shop. It was beautifully done, and I think was my favorite of the ones I found. 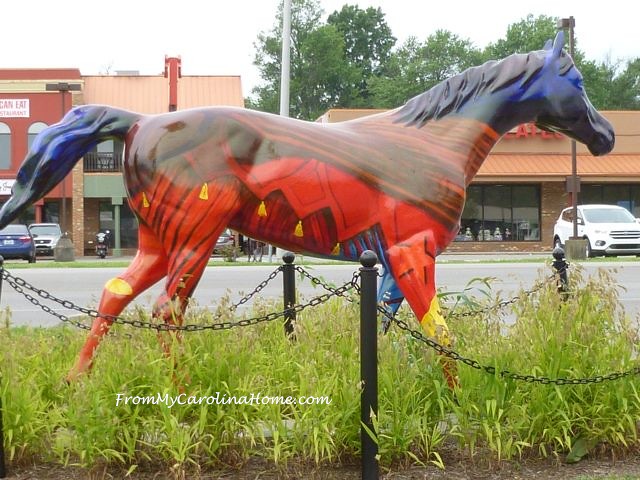 Next on the west side route plan was this shop, Quilter’s Square. 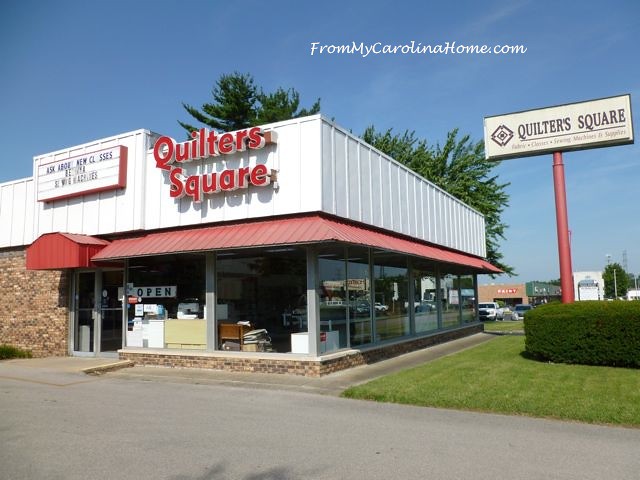 Beautifully light inside, and huge! Owners Chana and Kayla were so friendly and helpful, I really enjoyed chatting with them. 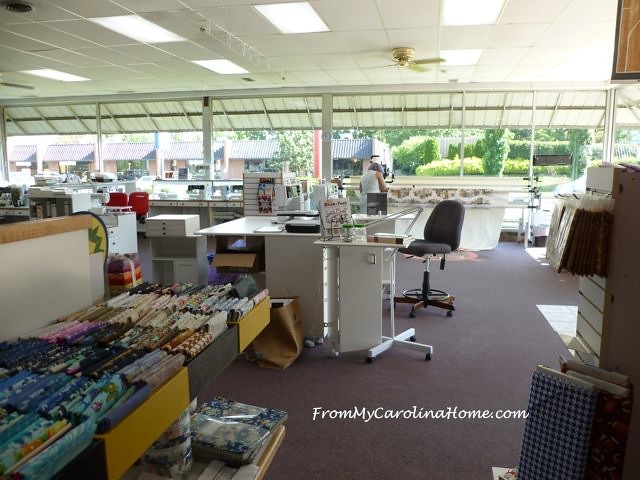 They are doing the Row by Row too, and had a darling hot air balloon pattern. Although I can’t show it to you, you can see in these pictures how many projects they have going on, with samples above the fabric. Just stop by and get their kit if you are near the area. 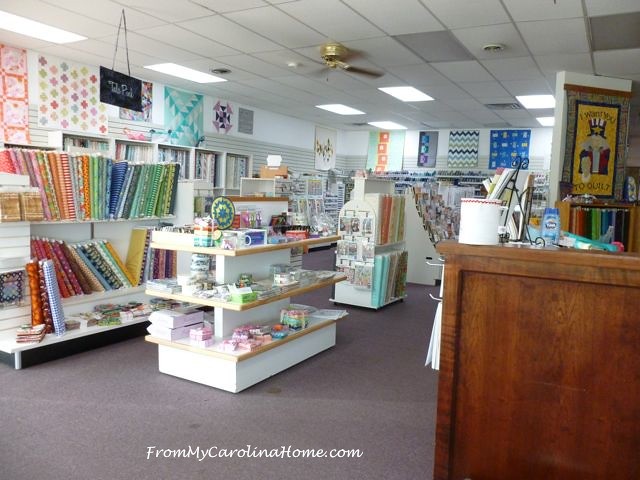 They had fabric and more fabric!  So much choice!  I could have spent a lot longer just admiring all the displays and quilts. 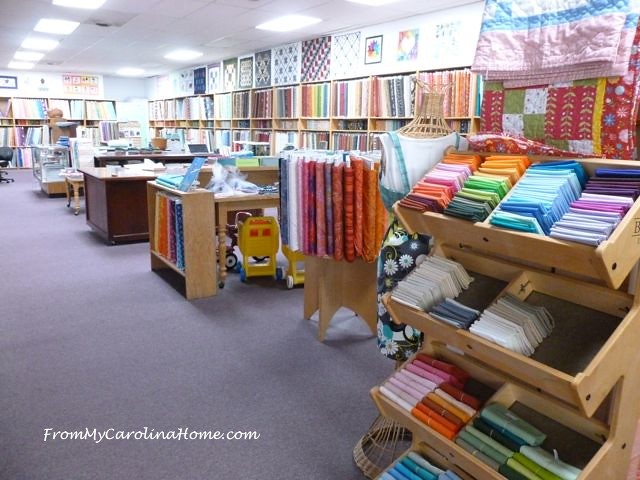 While I was on the west side, I had to go to my favorite chain bookstore, Half Price Books. I was delighted to find two stores in Lexington, this was the smaller of the two. 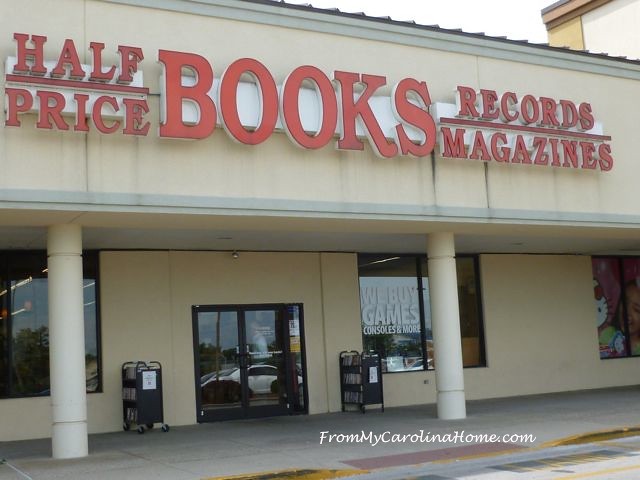 Yet it was stuffed as is usual for these stores.  The cookbook corner had the same amount of space as this one for crafting, sewing, quilting, gardening and more.  The clearance section was huge too, with lots of books at just $2. 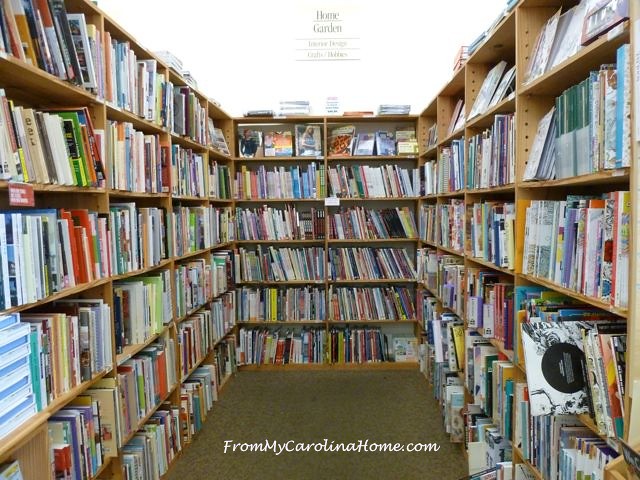 Dinner that night was at a local eatery called Saul Good, I had a flatbread pizza. 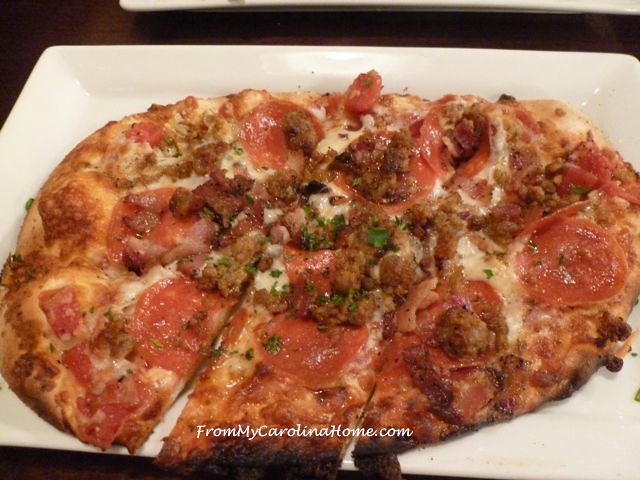 DH had a tuna steak, and shared his asparagus with me. 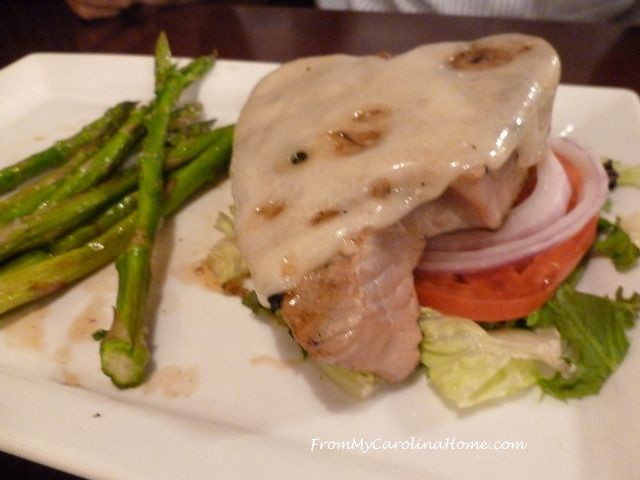 On the corner of the shopping center, this horse was standing watch. 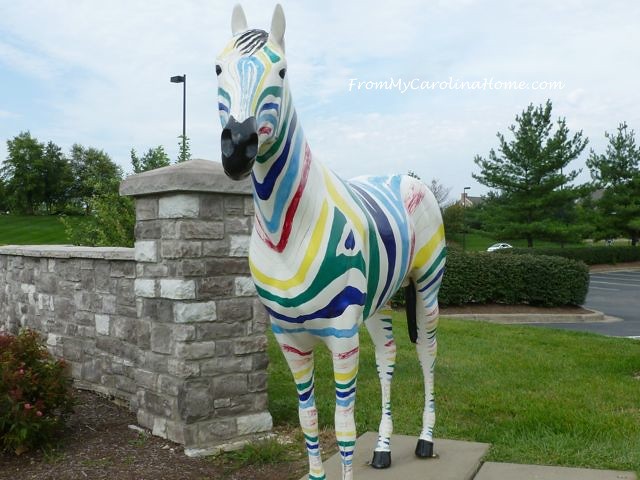 The next bit of shopping was on the east side, with Sew-A-Lot leading off the afternoon of fun. 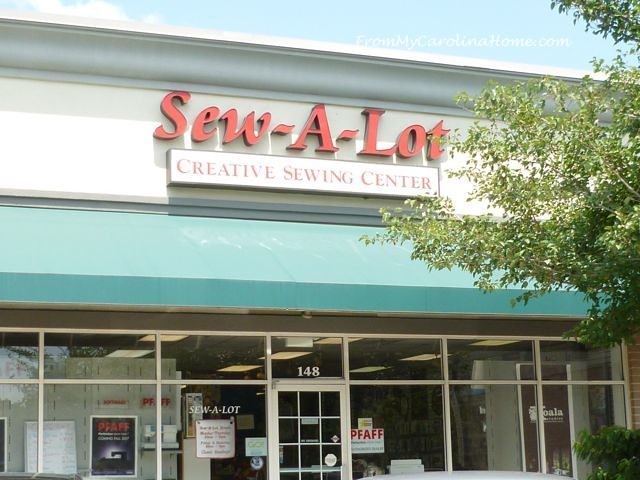 I have to say, I had just as much fun chatting with Patti, Thomas and Kim. They were trying to get to their lunch but were willing to chat as long as I was there, and I just couldn’t leave, LOL!! Sorry for delaying your lunches, but I was just enjoying myself too much!!  There were a lot of goodies to see, patterns and fabric galore. 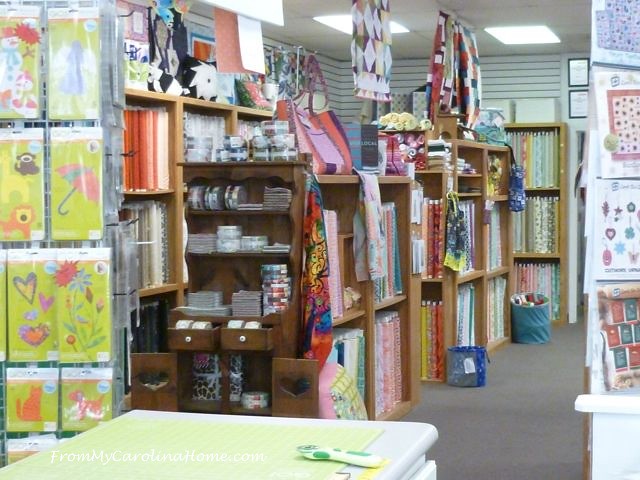 Their Row by Row pattern was inspired by one of their customers who uses a little red wagon to carry all her class supplies. It is a darling pattern, so stop over and get their kit if you are nearby this summer. 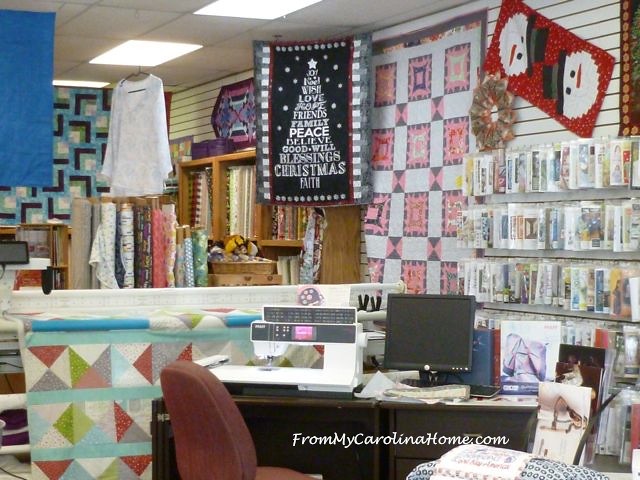 The east side’s Half Price Books was next on the list, and wow, what a pretty storefront with the arbor and flowers!! 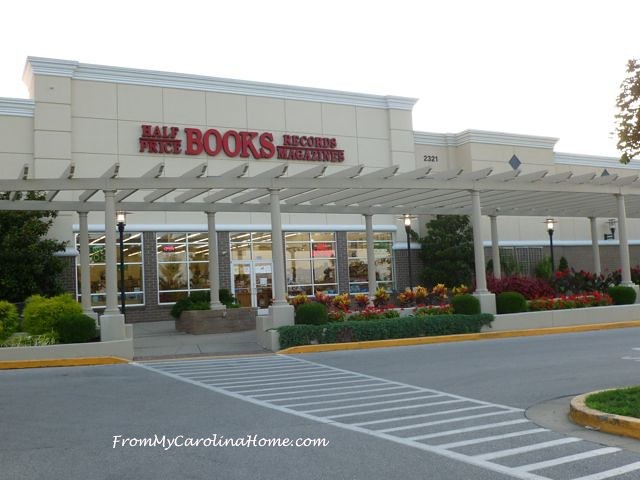 This large store kept me entertained for over an hour as I perused the fiction for books on my to-get list, and then the non-fiction for what might be fun. 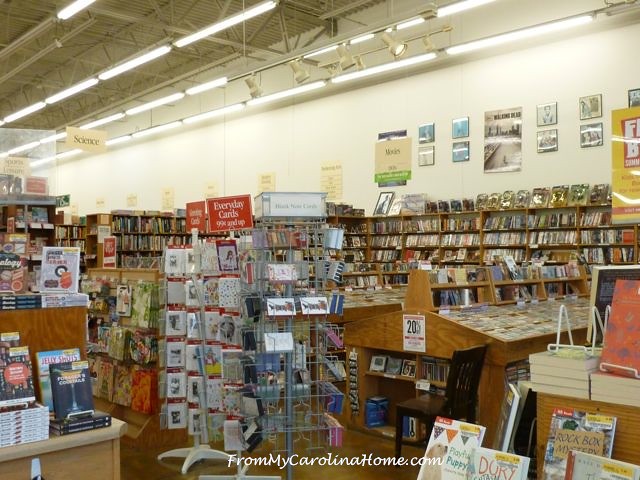 The last horse is the only one of the four with a plaque to show what it was all about, but it wasn’t dated. This one is in front of the TV station and is named Color Bars. It was bought at the art event and donated to the station. 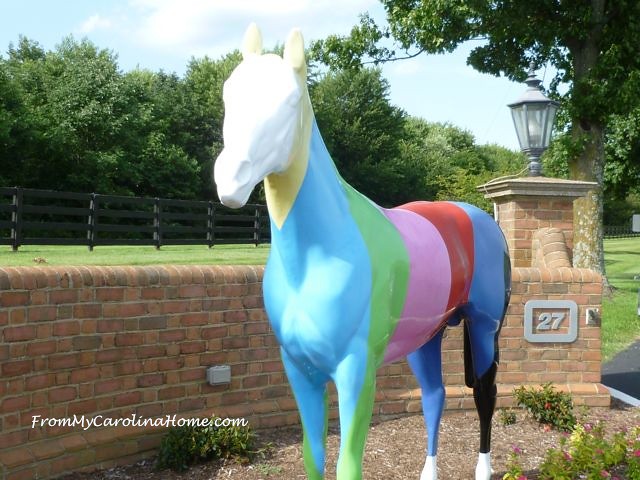 Dinner that evening was at Columbia Steak House. The original restaurant has been there since 1943. We went to one closer to the hotel that has been there for 17 years. It is locally owned, not a chain. 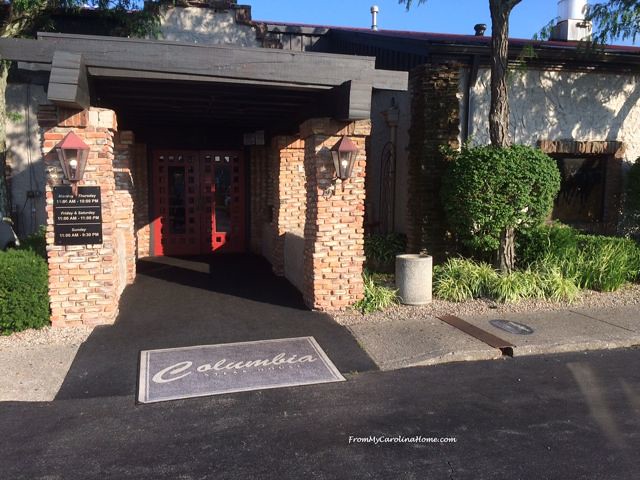 I usually look for one of a kind places like this when traveling. We have to resort to chain restaurants often enough on the road, so these are a treat. We started off with a shrimp appetizer as we were both hungry. I had skipped lunch to shop and sight-see. 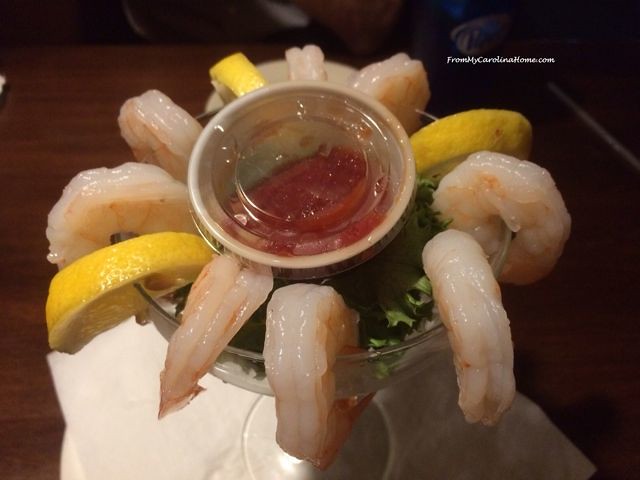 My dinner was a nicely grilled rib-eye with steamed broccoli. 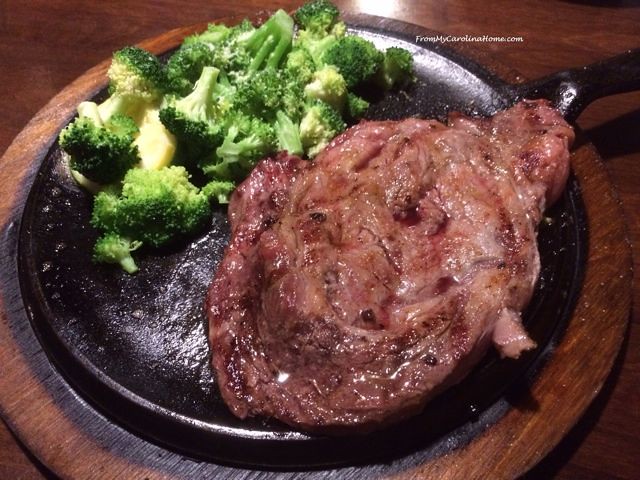 DH had a Kentucky staple, a Hot Brown. I was surprised to find out that this is not an open faced roast beef with brown gravy. Quite different!! It is sliced ham and turkey on a piece of bread, covered in a mornay-like sauce, topped with cheese and sliced tomato then broiled to melt and brown the cheese. Then it is topped with crispy bacon. Yum!! 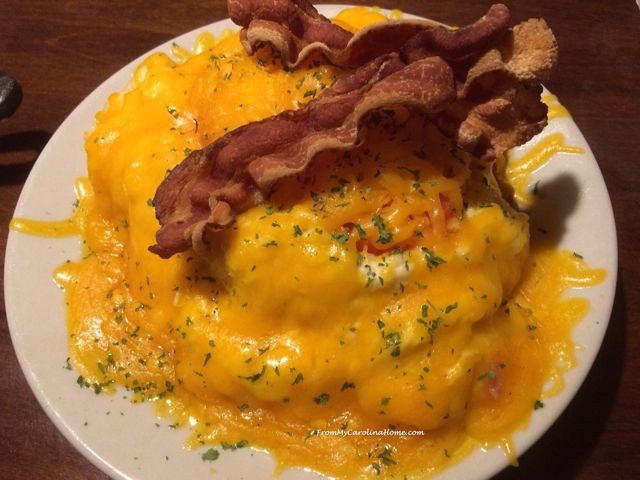 Inside the restaurant was again, all about the horse, with somewhat old fashioned decor and horse pictures on the stucco walls.  It was a bit dark, with stained wood beams on the ceiling and wood floors. 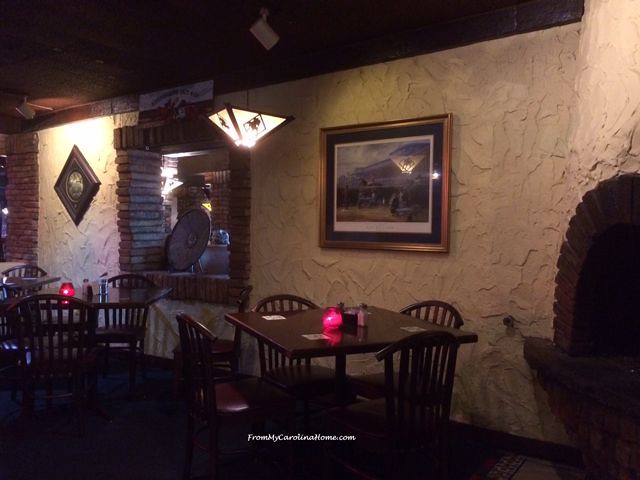 They had several beautiful stained glass like art on the doors and windows.  Only by getting very close could you see that it was done with paint, still they were nicely done. 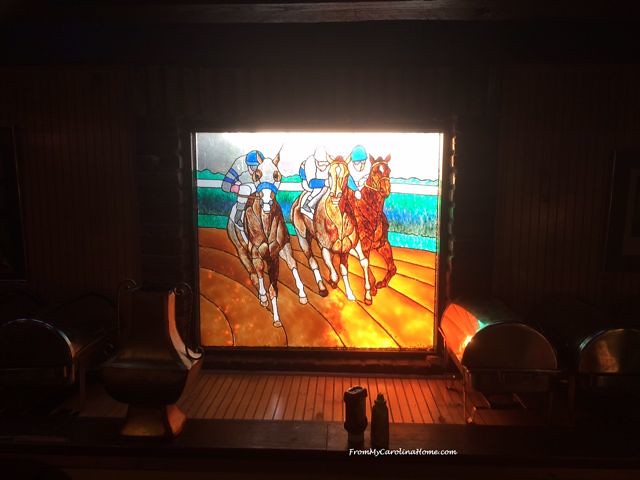 So, that was shopping and eating. In future posts, I’ll show you some of the other places I visited, including the Arboretum and Keeneland. We were not able to get to the Kentucky Horse Park where Man O’ War is memorialized as the greatest horse that ever raced. The tickets were $20 each plus $5 to park, and we just didn’t have the whole day to spend there to make that worthwhile. But, DH will have to go back later in the year, so we may try then.

Are you going to do a Row by Row quilt this year? Do you have patterns left over from last year like I do?

23 thoughts on “Having Fun in Lexington, Kentucky”