Looking out of the kitchen window earlier in the week, there were about 22 turkeys in the meadow. I took this to be the female flock, and it had grown from the 13 or so that usually come by. I decided to try to sneak out to the veranda to get a picture of them before they all moved into the forest. Moving slowly, trying to be quiet, I eased out of the door onto the veranda with camera ready. Much to my surprise, Bert and Ernie were in the group, and their heads came up immediately. Then they began running toward me! Oh rats, I hadn’t brought any bread out! 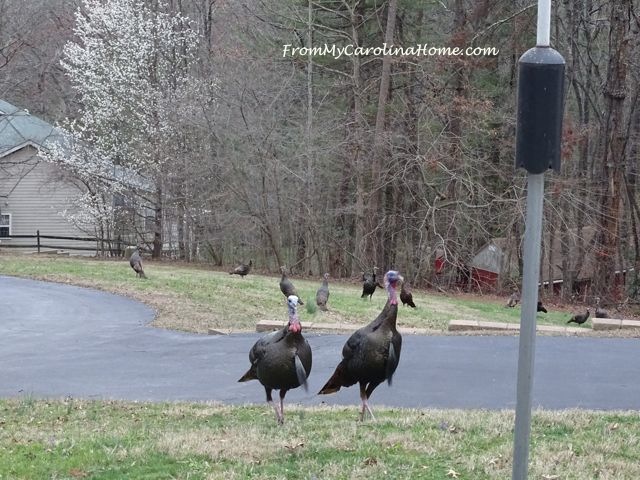 So, here they came. Bert, the larger and more dominant one, did a full fluff and tail fan, trying to impress me. He was trying so hard, that I went back inside to get them a bite. 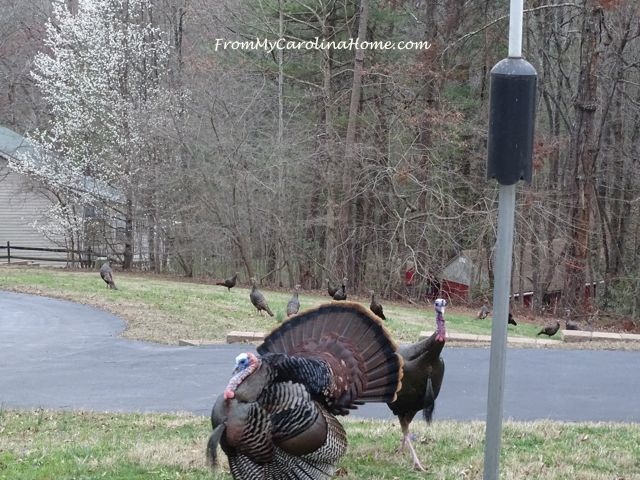 Magnificent, isn’t he?!! Yes, they both got several bites of whole grain bread. Out in the meadow, part of female flock left behind stood like statues watching the boys strut, while the others had already melted into the forest. None of them ventured up closer. I thought later that was probably a good thing, I really don’t need to be supplementing the diets of that many turkeys! 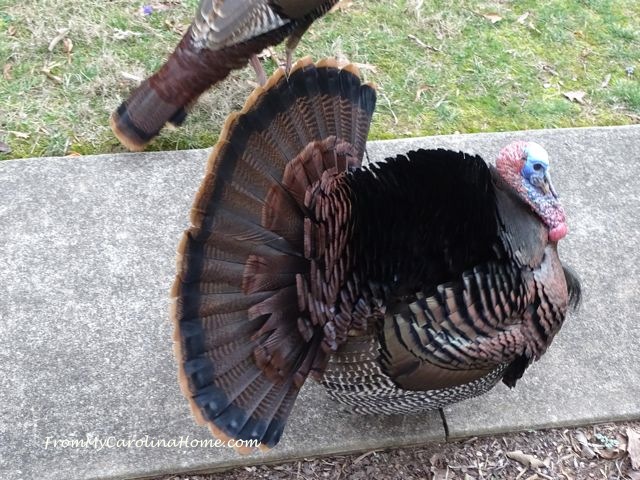 Bert gobbled at me loudly a couple of times, which I find hilarious. I talk to him, and he answers sometimes. Ernie is quiet, never says a word and doesn’t generally fluff up. But he is attentive, and gets his share. 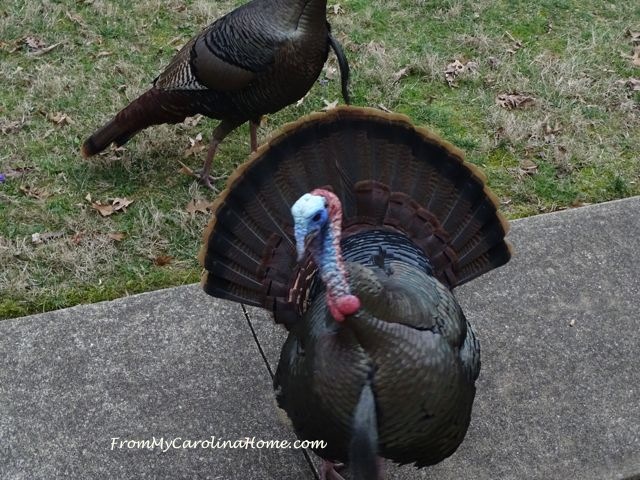 One more wildlife picture I haven’t had a chance to show, the turkeys came by one day in January with their deer friends. The deer are so skittish that I rarely get a picture of them. This one was taken from inside the Carolina room in the back, so they couldn’t see me. So fun to see wildlife around here! 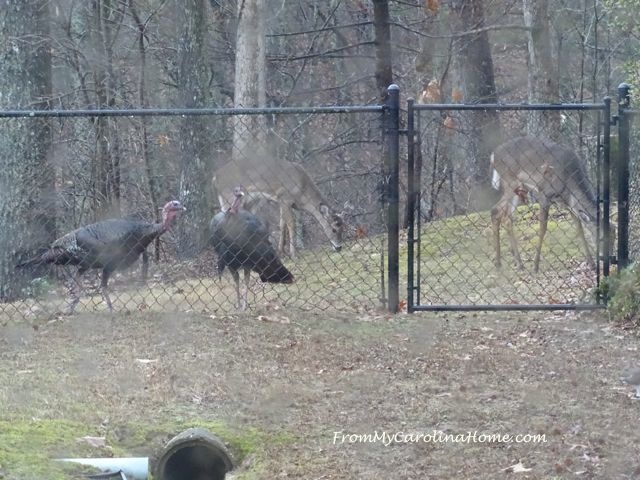 The picture is dark, and this bird has the sun behind him so it is hard to see.  His slate grey back, spotted chest and skinny legs point to being a Sharp-shinned Hawk. Although he was beautiful, I hope he doesn’t stick around, as they prey on small song birds as well as small animals. 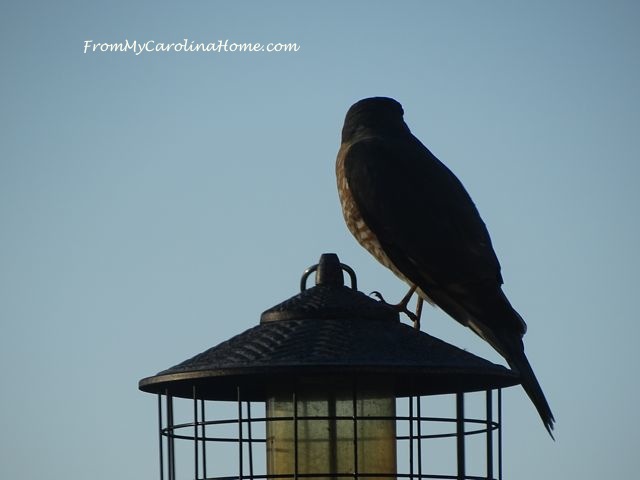 Sunday morning, we were treated to a rare view of our local deer herd, six females grazing in the meadow near the neighbor’s split rail fence. The nice zoom lens on the camera got some fairly decent shots. 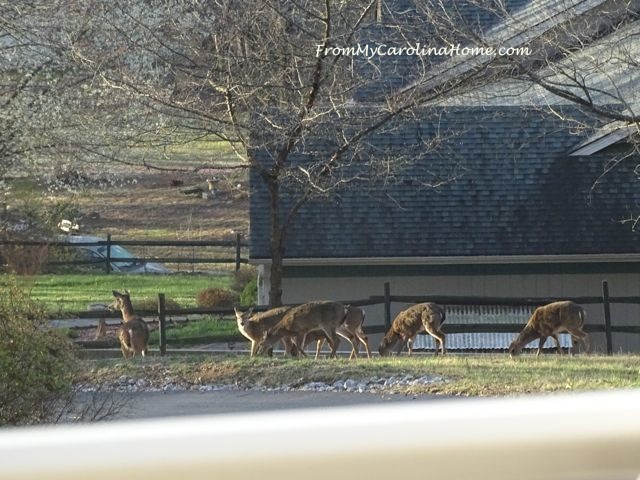 It was a quiet morning, early, and they all seem to be grazing contentedly. 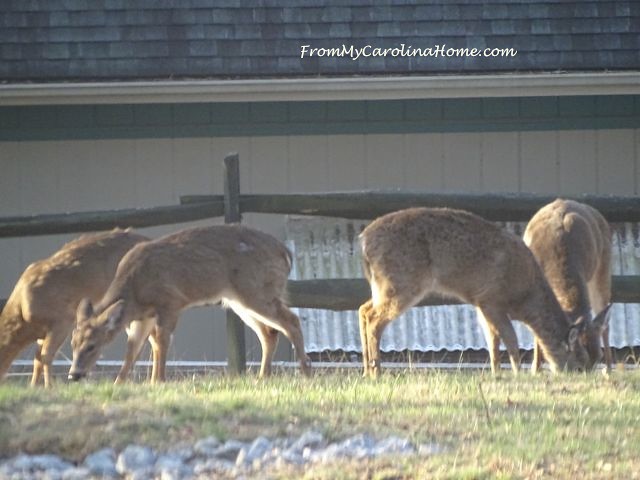 The least little movement or sound will scare them off, so I didn’t even attempt to go onto the veranda. Still, they were gone in a few minutes, taking the trail into the woods that the foxes like. 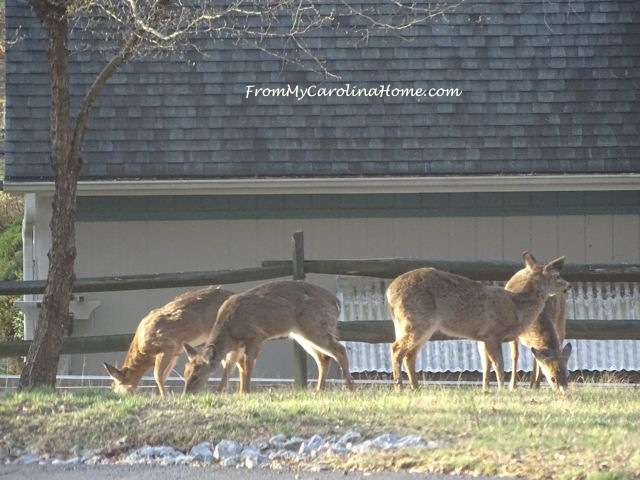 Up on the feeder, the goldfinch flock was hungry. They seem to be getting a bit brighter with the warm weather, but not to their summer color yet. 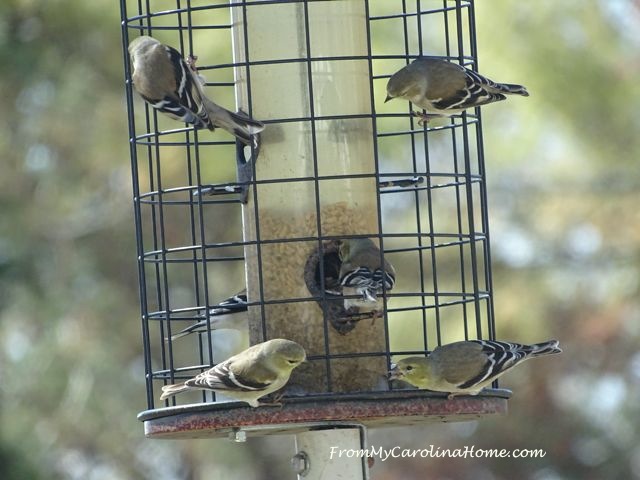 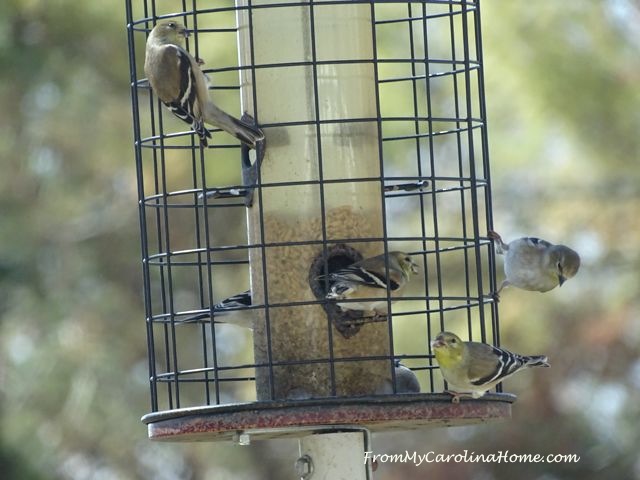 Chickadees, nuthatches joined the group later in the morning. 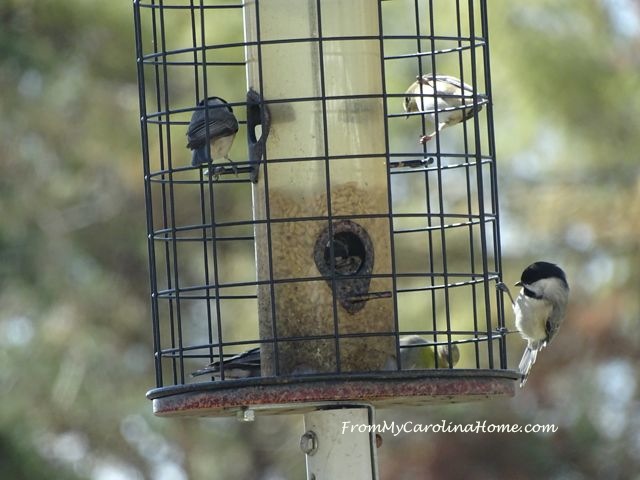 This little guy was the recipient of a bonanza of acorns. I had picked up a basketfull last fall, and started scattering them out this week. I know that springtime is the lean time for these guys. DH thinks I am crazy to do this, but the squirrels need to eat too. 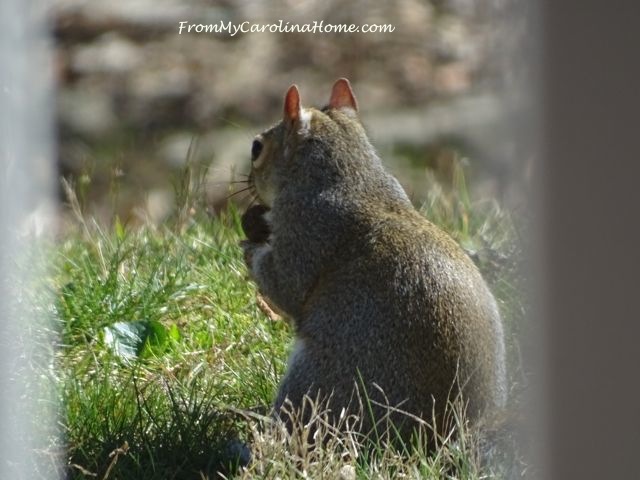 We had a couple of nights of really cold temperatures, so I made one of my suet cakes and DH hung it up for the little birds. The chickadees found it pretty fast. 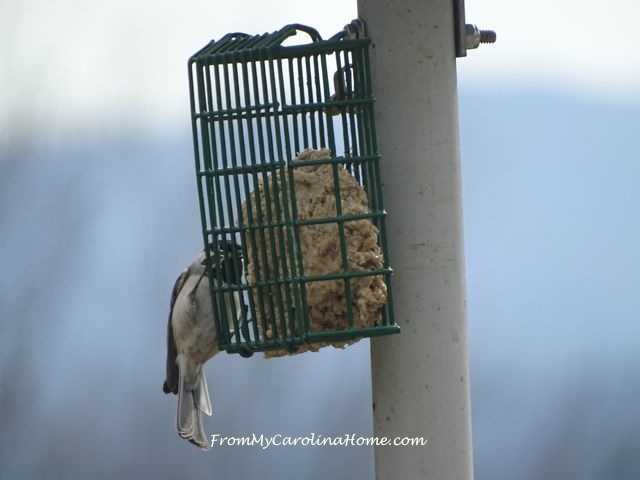 Later I saw this female hairy woodpecker on it too. 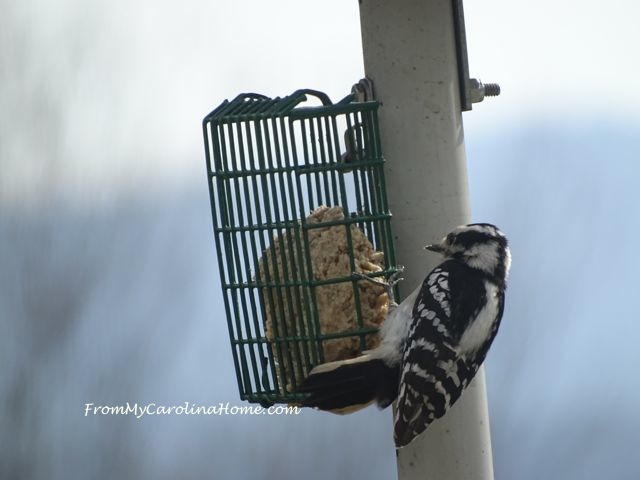 Then a real surprise on Wednesday morning. A large group of wild turkeys were in the meadow. Thinking that it was the girls with Bert and Ernie, I went out to the veranda with some bread heels. But, it wasn’t them! It was another flock, 17 birds in all with 3 males. Two of them are in full fluff and tail fan, the third is on the right with his tail feathers almost up. 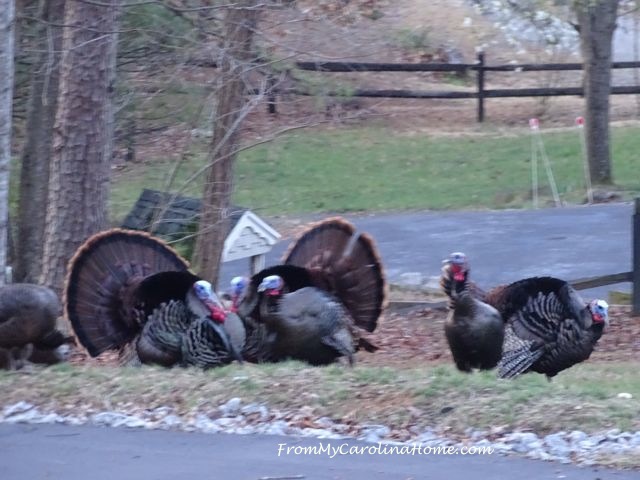 I grabbed the camera while they strutted and preened for the females. At one point two of them stood absolutely still, while a couple of the girls looked them over. I love to see them do this. After all, it is March, and mating season for turkeys. 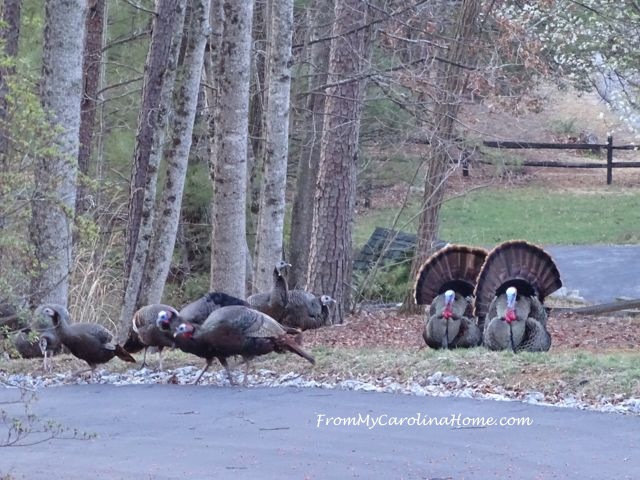 They kept strutting, and totally ignored me and my bread offering. Later, Bert and Ernie made an appearance right when DH was going to leave the house. We know from experience that they will show a bit of aggression towards the car, gobbling loudly and chasing it. So, I gave them a bread treat and we waited until they had moved on for him to do his errand.

So, what’s going on in your neck of the woods?