I like beef and barley stew, but one of the problems with making it is the quantity it usually makes.  I have found that I really don’t care for leftover food much anymore, and would rather have something fresh (or at least freshened, LOL, see my Creative Leftovers).  For our holiday meal we had a prime rib, and the leftover meat after several meals along with the bones made the perfect base for a dinner for two. 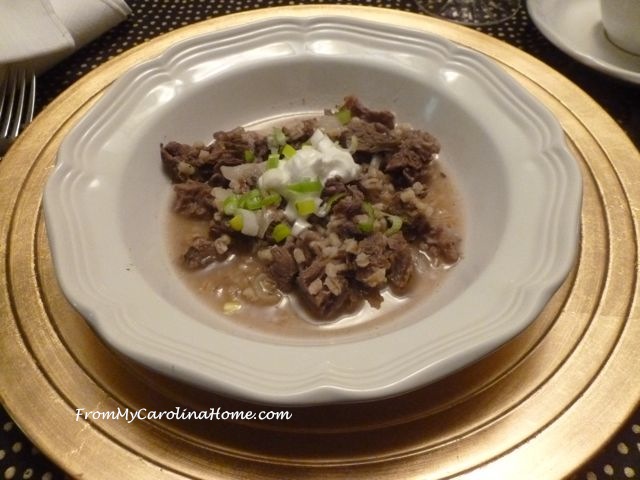 Actually, any beef bones with meat on them will do for this.  The bones will flavor the broth nicely with the onion.  You can add other aromatics like garlic, leeks and/or carrots if you like. 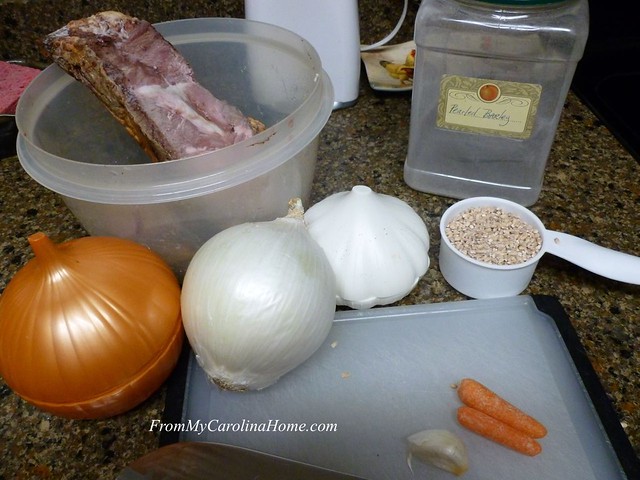 Chop the onion, garlic, carrots and any other veggies you like, and add to the pot with the bones. Add enough water to cover the bones and meat, usually around 7-8 cups. Some of it will boil away and reduce the broth. 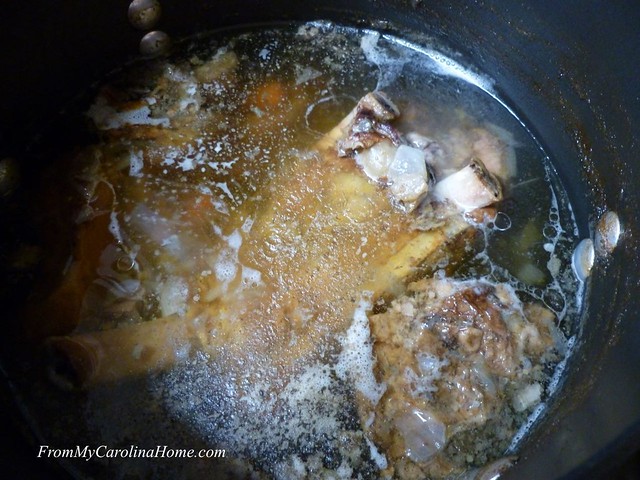 Bring it to a rolling boil. 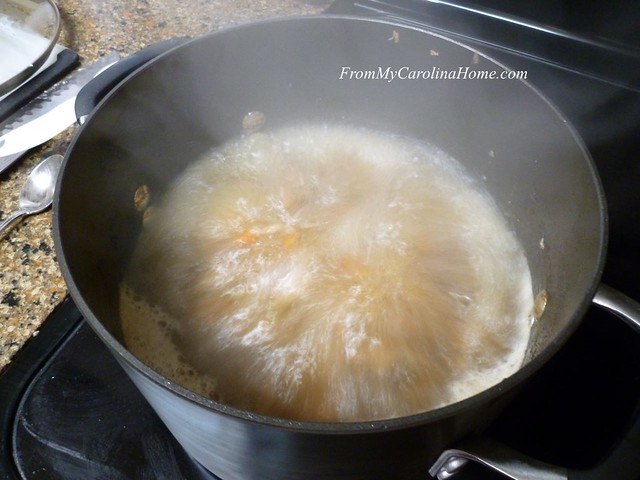 Then, reduce the heat and simmer for about an hour, and up to 2-3 hours.  This will get the most flavor from the bones, and tenderize the meat so it comes off the bone easily.  Add mushrooms if you like them. Measure out 1/2 cup of pearled barley. 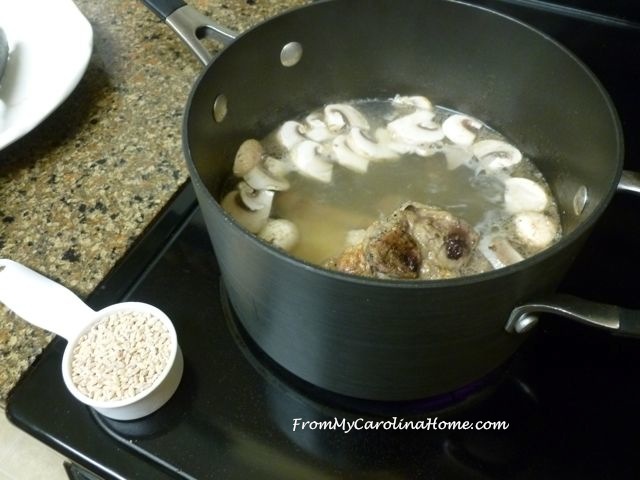 Take the bones out and allow to cool so you can handle them while the barley cooks. 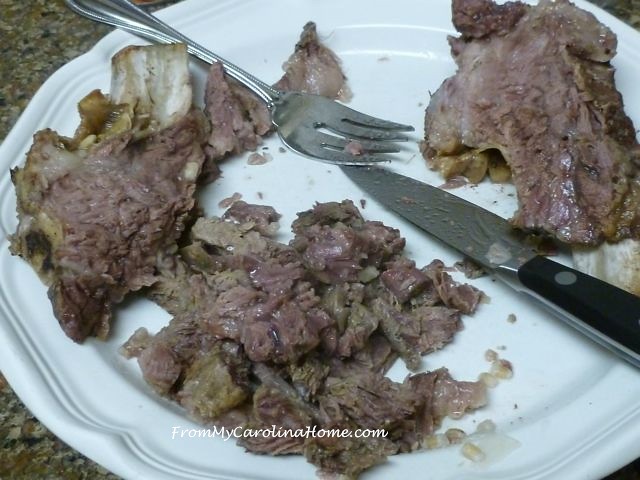 Shred the meat off the bones. You’ll be amazed at how much meat is on those bones! Cut away any fat and discard. 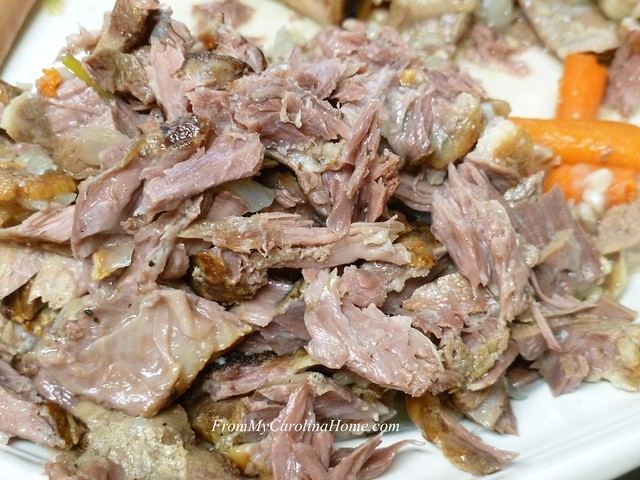 De-fat the broth using a fat separator. I have to do this in three batches as I had about six cups of broth after simmering. 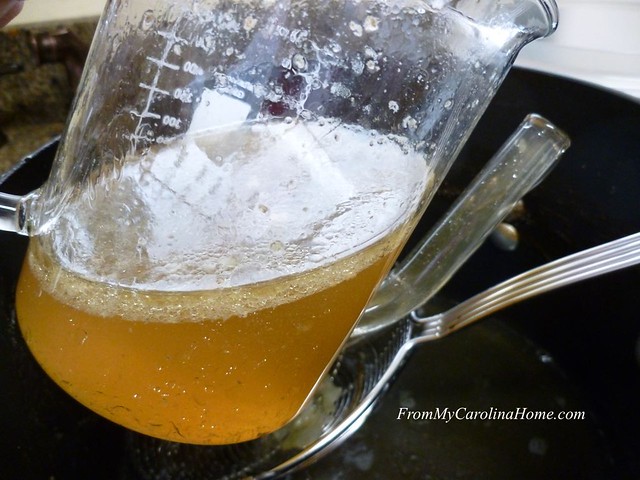 Bring the broth back to a low boil or high simmer, add the barley and cook about 45 minutes, or until tender. The barley will take up much of the broth. Add the meat back to the pot.  Add salt and pepper to taste.  I don’t do any thickening of the broth for this meal, the barley is filling and it is nice to have the beef broth just served as it is. 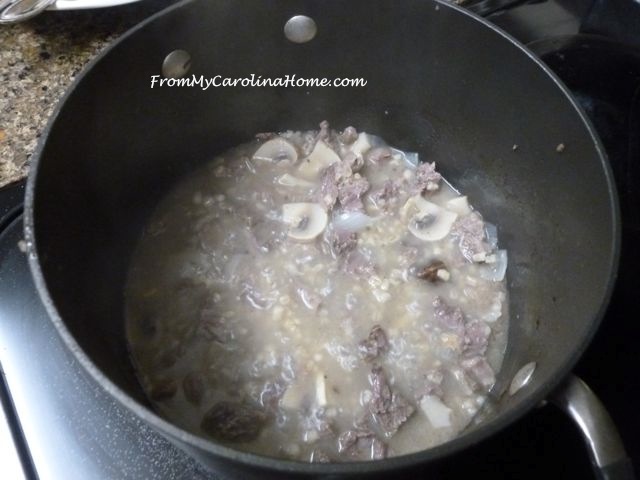 Serve in a bowl, I like using the pasta bowls for stew. 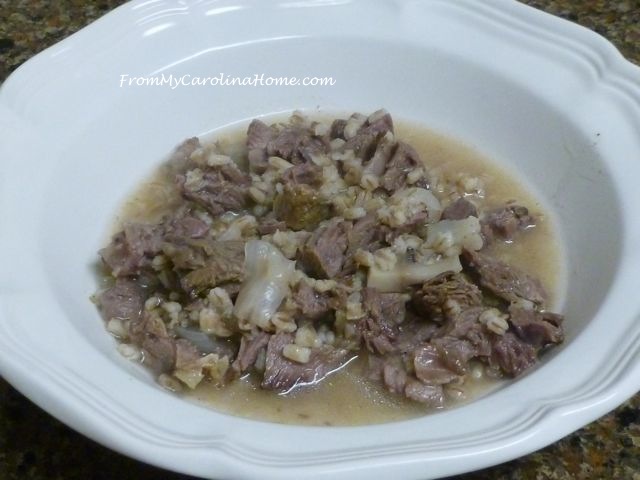 I like to add a dollop of sour cream and some chopped green onions to my bowl.  I love the fresh flavor these garnishes give a meal.  DH just gets green onions as he isn’t a fan of sour cream.  He gave me some white truffle oil last month, and it was delicious on this stew too – adding an earthy flavor. 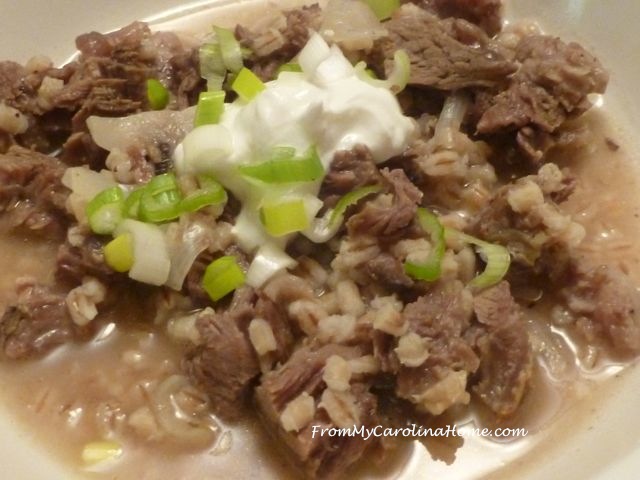 With a salad as the first course, the stew makes a filling supper, and there is enough just for two with maybe a small bowl left over for lunch tomorrow. This is a great way to use up the remains of a beef dinner, and make the leftovers into a fresh meal.  If you need a bigger amount, just increase the water and barley in a 3-to-1 ratio.  The amounts of onion and mushrooms can be increased too, this isn’t a precise recipe.  A bit more or less of any component will work.  You can add other things too, like green peas or carrots at the end of the cooking if you like.

Place bones, onion, any other veggies you like and water in large pot and bring to boil. When the stew has boiled, reduce the heat and simmer for about one hour and up to three hours. Add mushrooms if you like them. Measure out 1/2 cup of pearled barley. Take the bones out and allow to cool so you can handle them while the barley cooks. Shred the meat off the bones.  Remove as much of the fat as you can using a fat separator. Bring the broth back to a low boil or high simmer, add the barley and cook about 45 minutes, or until tender. The barley will take up much of the broth. Add the meat back to the pot, salt and pepper to taste. Serve in bowls with broth, garnish as you like, sour cream and green onions are tasty. 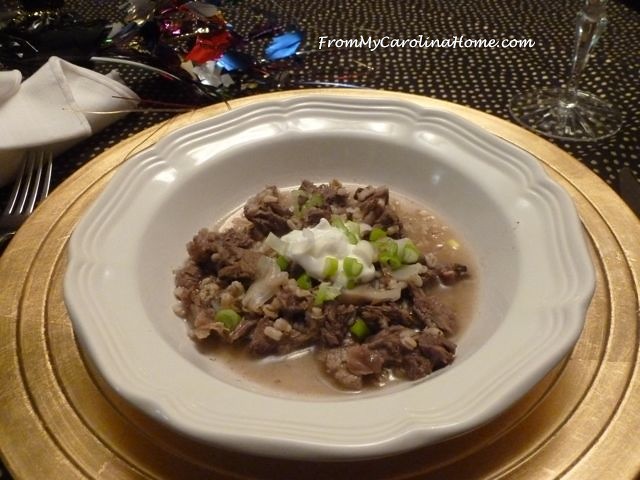 Do you enjoy beef and barley stew?  What do you like to do with leftover beef?