Many years ago, I was a new bride learning how to cook by watching Julia Child on her weekly television show, The French Chef, and later, From Julia Child’s Kitchen. When she showed her French Lasagne, I decided to try it. Now, the thing with her recipe is that it has many elements, and each one has to be individually cooked before assembling the final dish. It completely destroyed a kitchen!  The recipe as published in From Julia Child’s Kitchen has three pages of ingredients and prep.  It has not only a white sauce inside the layers, but a tomato sauce on top, both made from scratch. In the ingredient list was more prep, to get the diced cooked chicken called for, you had to to cook a chicken or pieces of chicken. I would boil a couple of breasts to use, dirtying up one more pot. It was such a production, that I only made it for special occasions when I had the motivation and energy to make a huge mess in the kitchen and clean it up. I would sometimes make two and freeze one. It quickly became one of DH’s favorite meals, so I had to make it every now and then. Over the years I started to find ways to cut corners, like having a chicken meal so I could have leftover chicken to use. When DH said he thought the tomato sauce wasn’t necessary, I eliminated that. Over the years since, I figured out more ways to lower the number of pots and pans used, and have a manageable recipe.  Still, I only make it a couple of times a year, and this time I took process pictures to share it with you. 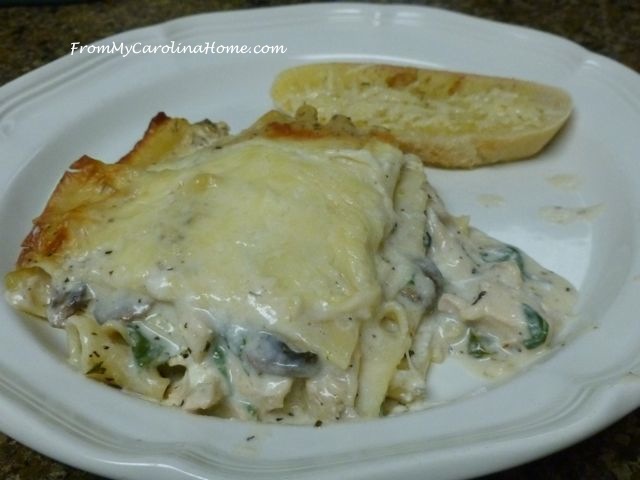 As usual, I gathered the ingredients. I like doing a mise-en-place so I don’t have to hunt for things in the middle of prep. 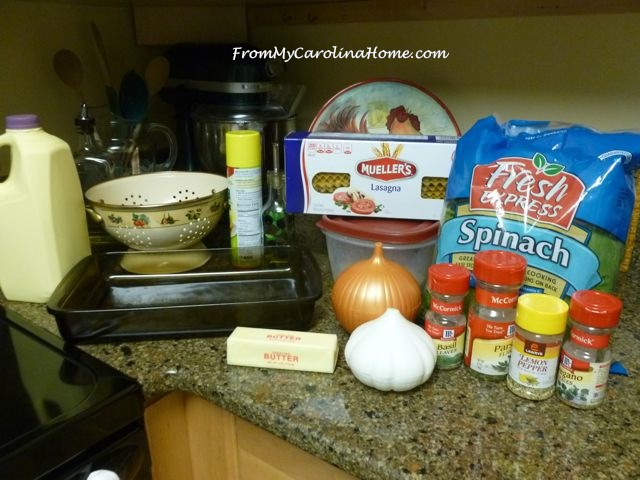 I began by cutting up mushrooms and sauteing them in a pot. 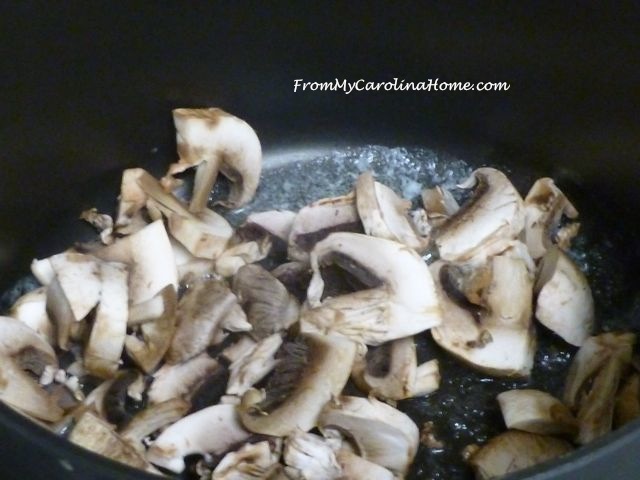 Set them aside in a bowl. 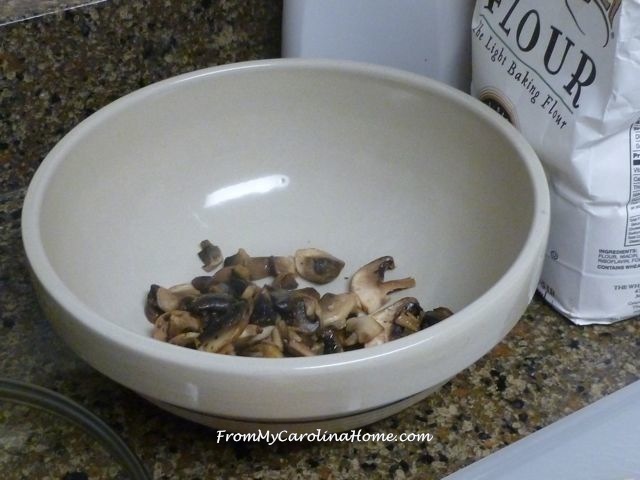 Using the same pot, I wilted spinach, then set it aside on top of the mushrooms. 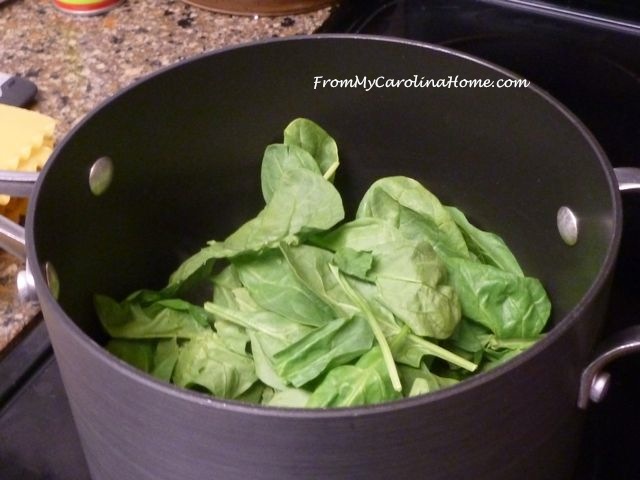 In a larger pot, boil water for the lasagne noodles. Cook according to package directions and drain. 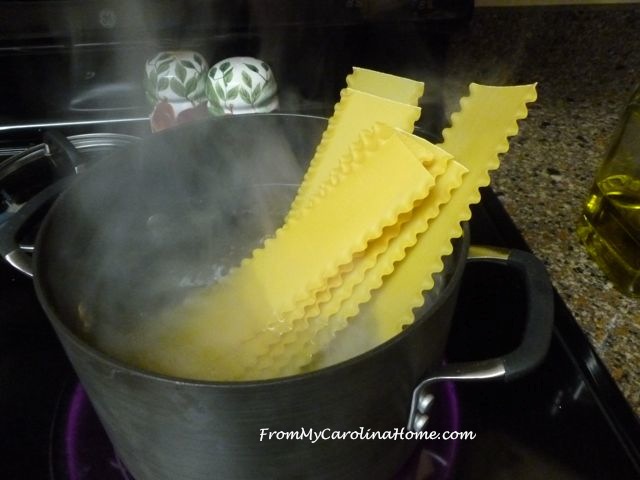 While it boils, chop onion and garlic. 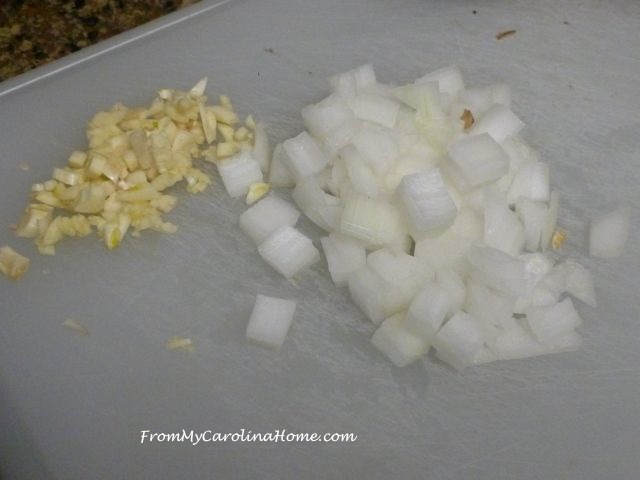 Then saute in the same pot used for the mushrooms and spinach. Add flour and cook for a couple of minutes. 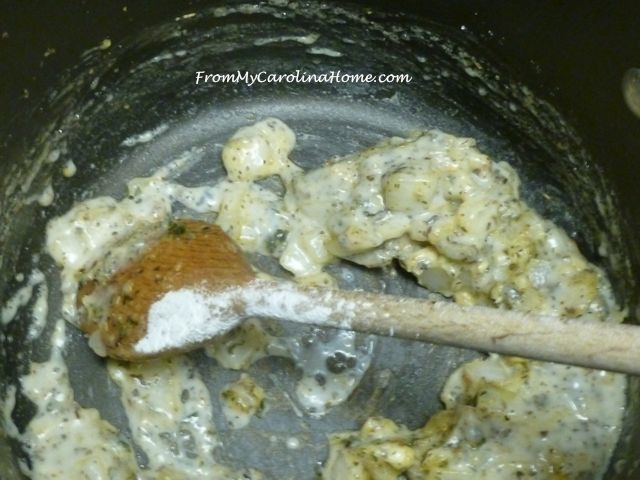 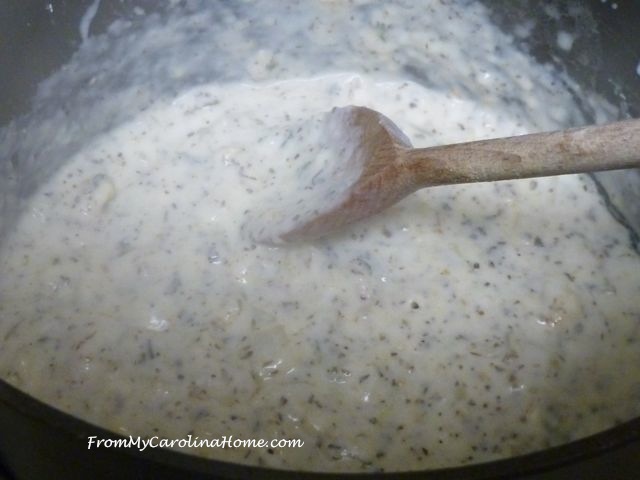 Add the mushrooms and spinach to the sauce, then set aside. 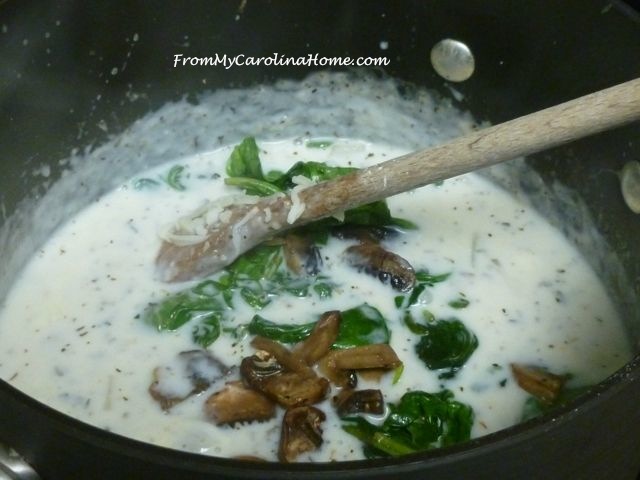 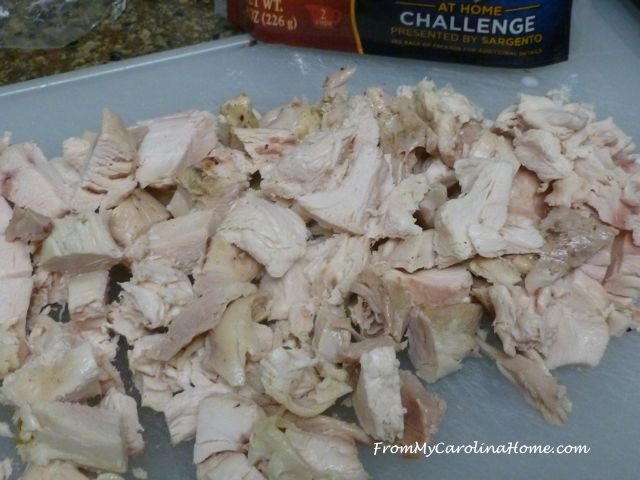 Layer noodles and chicken in your lasagne pan. Mine is 8×12 inches, which fits three lasagne noodles perfectly on one layer. 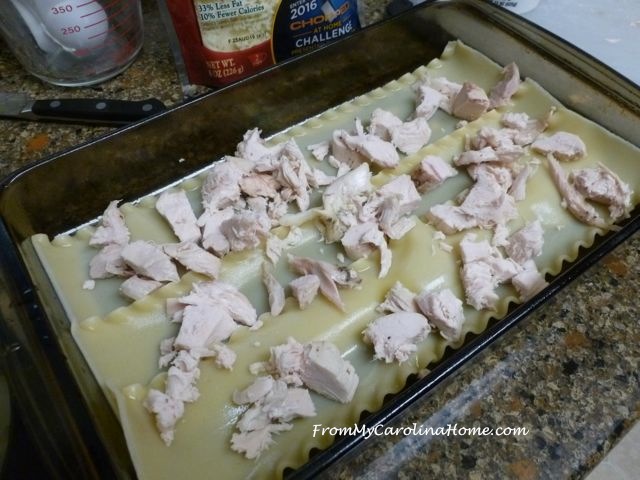 Cover with mushroom and spinach sauce. 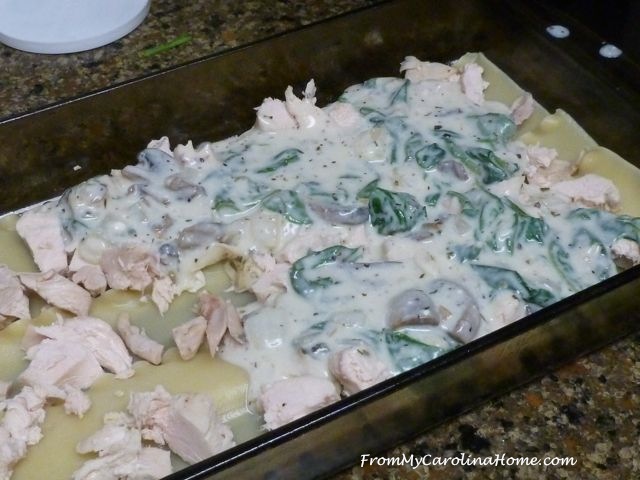 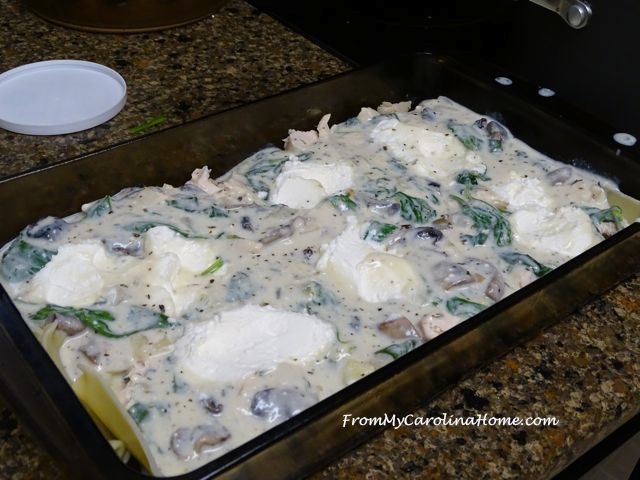 Continue for three layers, adding some mozzarella in the layers if you want. 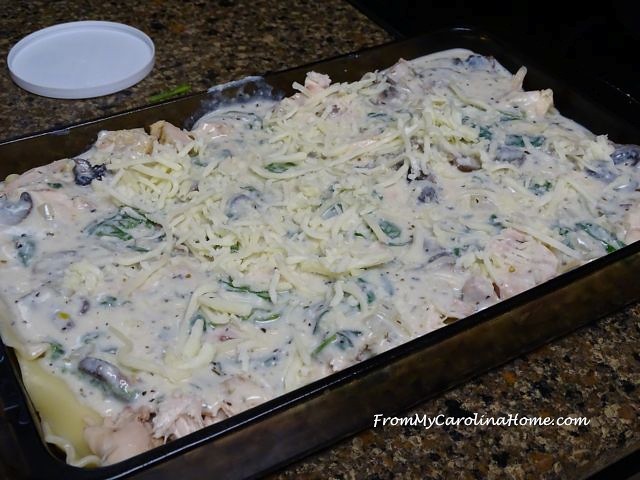 Top with a layer of mozzarella cheese. 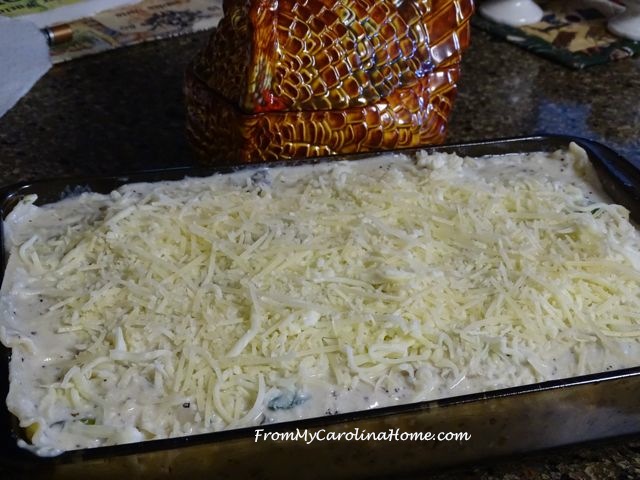 Clean up while the lasagne is baking. Now just two pots, one bowl, one cutting board and the colander.  This is a lot better than the four pots and numerous holding dishes the original recipe used! 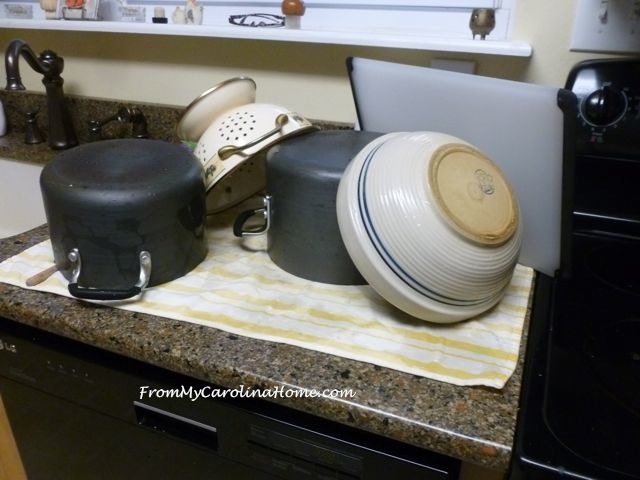 Bake about 30-40 minutes, until cheese is melted and the lasagne is bubbling. Normally I would have put this one back in for another five minutes, but DH was hungry and anxious to dig in. He said it was done enough, LOL! 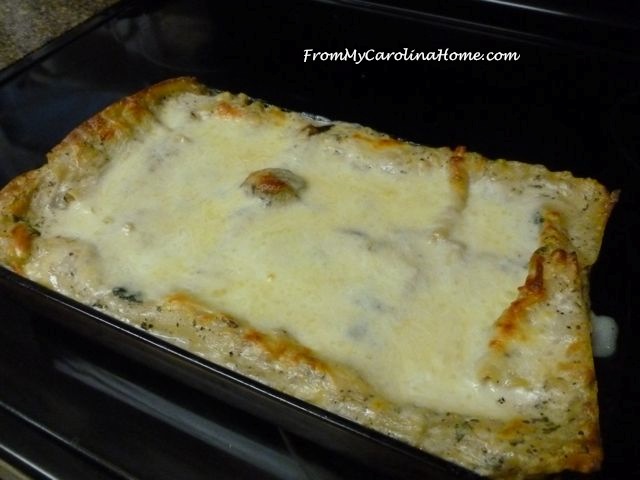 So he got his wish. A one dish meal, and very little left to clean up after eating. 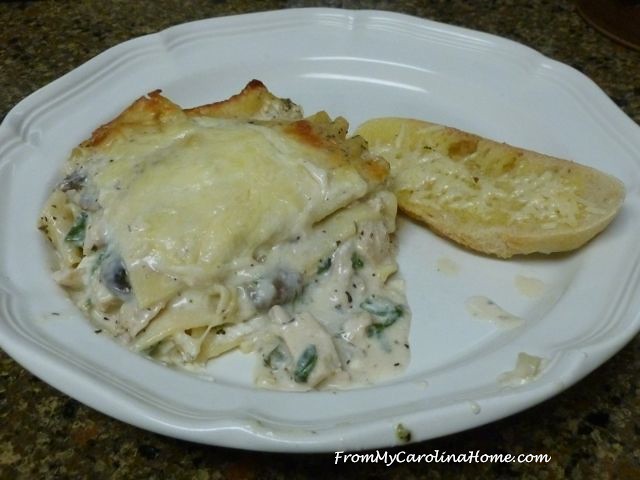 It freezes very well, so think of this for your holiday time. We have beef at Christmas, so I can make two smaller dishes in October and freeze one. Then, when the refrigerator is full of holiday meal prep, on Christmas eve I just take it out and set it on the counter to defrost. Baking it at dinnertime, we have a delicious meal to feed a houseful, yet I can spend the entire day doing other things. It works as a one dish meal, or add a salad to make it go further. Just cover your dish with plastic wrap then foil to seal it well. It will keep for a couple of months in the freezer.  I am showing it wrapped for freezing after baking here, but when I make two I would actually freeze one before the final baking.  Although it works either way.  I froze half of the one I baked for dinner this time for a meal a couple of weeks later. 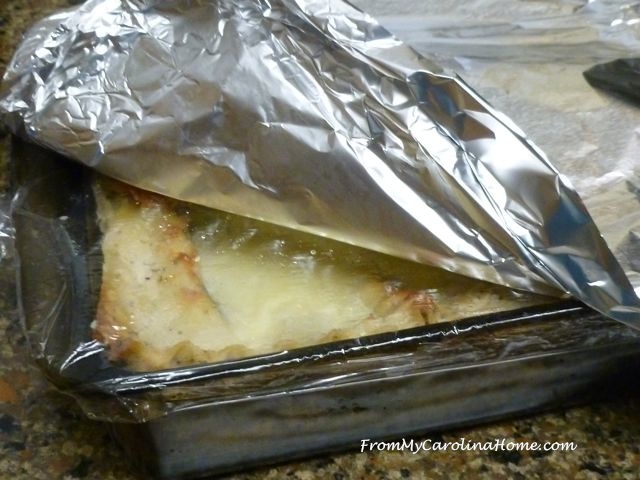 Yes, it is still a bit of prep even in this simplified form, but I assure you it is worth the effort. It is delicious!!

Spray a baking dish with cooking spray and set aside. Start water for boiling lasagne with salt and olive oil in a large pot. Cook pasta according to package directions, setting a timer. Saute mushrooms in a medium pot on medium high heat and set aside. Wilt spinach (if using fresh) in the same pot and set aside in the bowl with the mushrooms. Saute onion and garlic in butter and olive oil for a couple of minutes on medium high heat until translucent. Add flour and cook for a couple of minutes. Slowly add the milk, stirring constantly to create a smooth white sauce. Add lemon-pepper, herbs and salt, remove from heat.  Add mushrooms and spinach to the sauce, and set aside. Drain pasta. Assemble the lasagne in the baking dish, layering pasta then chicken, then mushroom-spinach sauce, dollops of ricotta and a little cheese in each layer. Make three layers. Top with shredded cheeses. (If planning to freeze, set on counter to cool, then cover with plastic wrap and foil. Freeze for up to three months. When you are ready to bake, let it defrost on counter several hours or overnight in the refrigerator.) Bake at 350 degrees for 30 – 40 minutes until lasagne is bubbly and cheese is melted and browned.

I did a pdf for you to download this time so you’ll have it for the holidays. Click on Chicken-Florentine-Lasagne