Pretty, isn’t it?  This is my driveway this afternoon.  When the snow started coming down harder mid-morning, we thought we might be going home early.  Sure enough, cancellations started coming in, snow came down harder, and we decided to close up.  If only we had made that decision a little sooner!!

Coming home, roads were a little slick in some spots, but I was hoping that the driveway would be passable.  Alas, not to be.  Part way up the hill to my house, the tires lost traction, and I slid backwards about 30 feet.

When the car did get stopped, thankfully not in either the drainage ditch or the ravine, I pulled out my cell and called the house, heart pounding.  Hubby was home for a change.  Between him, and two neighbors, we got the car backed slowly down the twisting road and parked in a neighbor’s driveway.  That meant walking, or should I say hiking, up the mountain to the warmth and security of home.

After a change of clothes, there was still a little time left to enjoy a good book next to the fireplace.  Here is a suggestion from one of my favorite writers, Sarah Addison Allen.  It is set in North Carolina. 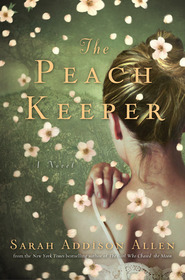 Willa Jackson is an organic sporting goods store owner in the small North Carolina town of Walls of Water.  She is a descendent of the town’s founders, who were wealthy landowners and builders of the Blue Ridge Madam, a wonderful old mansion.  The loss of the logging industry to national parks caused the financial ruin of Willa’s grandparents and the loss of the old home.   Recently, the home was purchased by high school classmate Paxton Osgood and is being restored to its former glory for use as an inn.   Willa can’t help but follow the progress.

When Paxton’s brother comes to town to finish the landscaping, he sets to work removing a peach tree that has no business on the property as peach trees cannot set fruit in the mountains.   Desiring the property to be true to mountain ecology, he plans to replace the peach tree with a huge live oak transplanted from elsewhere.  When the peach tree is dug up, more than the roots are exposed.  A number of personal items are found beside a skeleton.  It doesn’t take long to identify who it is, the question is why was he murdered, and who did it?

Willa and Paxton form an uneasy alliance as they dredge up the past between their two grandmothers and uncover an uncomfortable truth.  But they also learn that ties of true friendship and love can transcend time.

The book is sprinkled with small strange occurrences, but it really is not a book of paranormal activity.  It is foremost a story of people and their relationships, of friendship both long term and newly formed, of loyalty and support over a lifetime.  The story is an easy read, and I recommend it.

Two hours later, and the snow is now about an inch deep and still coming down.  Luckily, I don’t have to work tomorrow. 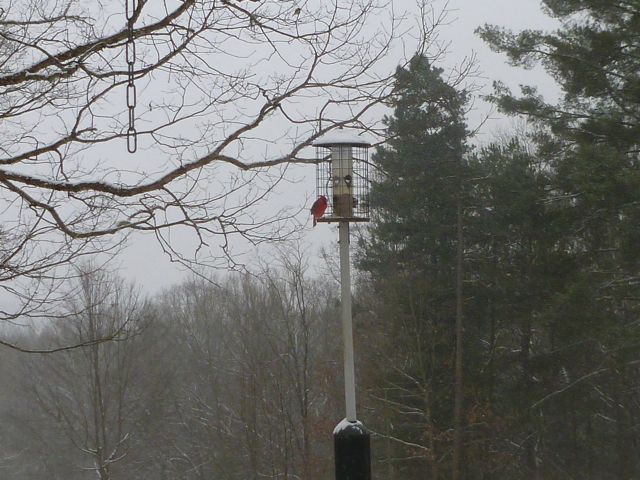 The cardinal and the nuthatch are pigging out.  Stay warm!