Rainy days, and a lack of inspiration in the quilting area has left me reading more this past month.  I’ve devoured several good books and thought you’d like to talk about reading today.  Don’t miss my giveaway note later in the post!  Here’s what I have finished within the past few weeks.  Click on the book title for Amazon links for the synopsis.   Thank you for using my affiliate links when you can.

Final Resort by Ian St James – Interesting and well paced novel of greed, ego and international finance. The protagonist makes a bad decision to borrow from a shady character, and the consequences could be dire. As the novel progresses, the entanglements get more complex and the race to get the loan paid makes this novel impossible to put down. I enjoyed it, a nice change of pace. 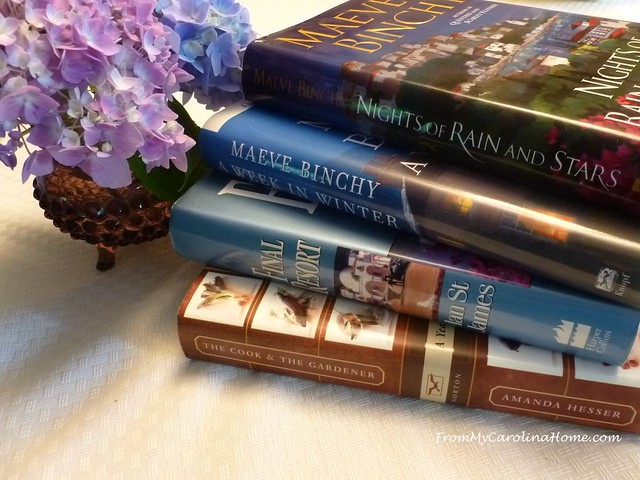 Night of Rain and Stars by Maeve Binchy – Nicely written, character driven novel of four people from four different countries all running away from something in their own lives. Taking a trip, they all end up on a Greek island, where events cause them to re-examine their reasons for making the choices they have in their own lives. The book has a definite moral, that life is short and family is important. With the usual Binchy happy ending, it is a nice read for this time considering current events.

A Week in Winter by Maeve Binchy – Beautifully written character study novel of a woman opening a remote hotel in an antique home on the Irish coast. Lovely stories of individual people coming to stay during the first week of opening comprise the second half of the book. This had such potential to be a whole series, and it is so sad that it was the author’s last book before she passed away. Very enjoyable book. 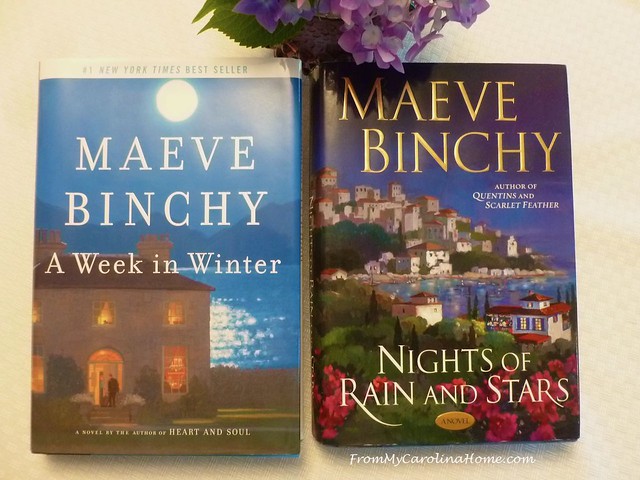 These next two books are cozy mysteries, the last two in the Southern Sewing Circle series by Elizabeth Lynn Casey.  Both are standard cozy fare and a bit formulaic murder mysteries, simply written and easy reads.  For those who haven’t heard that term before, a cozy mystery is one where the murder takes place ‘off stage’, there is no violence or gore, no foul language or explicit sexual encounters.  They are easy reads that often are easy to figure out, but occasionally have a twist at the end. These didn’t have as much sewing and quilting as previous ones.  These are fine books when you don’t want to think too hard.  I don’t review cozies on Goodreads anymore as they are all about the same. 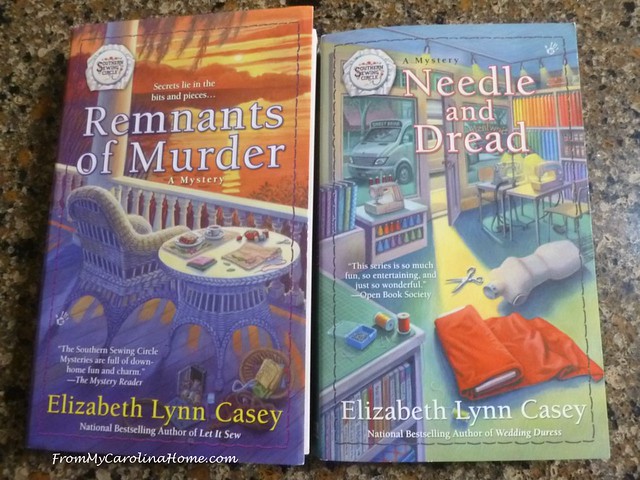 Lastly this month, a really extraordinary book, part non-fiction memoir and part cookbook is The Cook and the Gardener by Amanda Hesser.  Ms. Hesser spends a year working as a cook for an author, her family and guests in a 17th century French chateau with a walled garden.  Meeting the crusty  gardener Monsieur Milbert, she spends a year going from being a nuisance to him, to his student, and eventually forming a fragile friendship around vegetables and fruit.  It is divided into chapters, one for each month of the year, and each chapter has recipes to use what is fresh at that time. 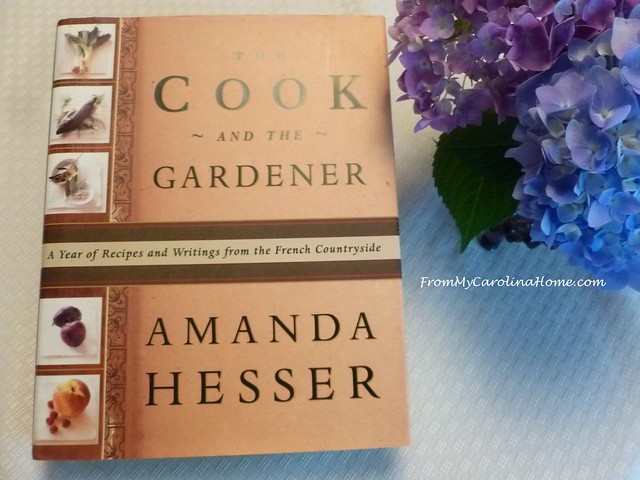 Throughout the book are lovely illustrations by Kate Gridley, not only of Monsieur Milbert, but also the vegetables from his garden.  I’ve had this book out for months, drawing inspiration for my own cooking from the seasonal recipes.  The essays on her life and the garden in each chapter are well written and engaging.  I really enjoyed reading her story, and will be trying a number of the recipes. 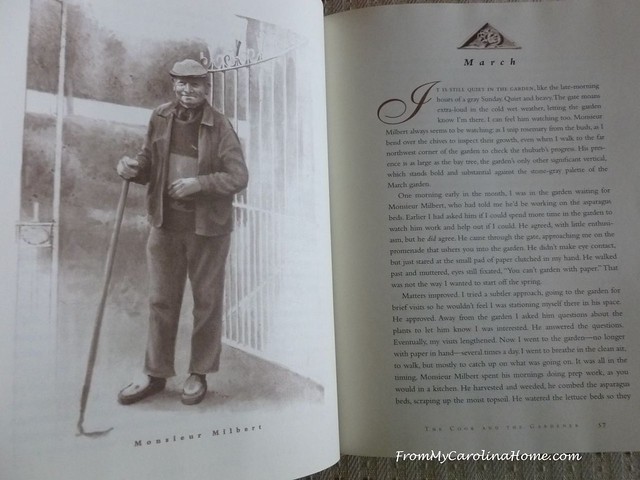 This past January, I reviewed Girl Who Chased the Moon by Sarah Addison Allen, and I found when looking at my bookshelf for the next thing to read that I have two copies.  So, leave a comment on this post with what you are reading and I’ll send one lucky reader my extra copy.  It is a sweet confection of a story, easy reading and simple in plot. There is the fun magical aspect that defines Allen’s writing style, not overwhelming but just enough. Who wouldn’t want to have wallpaper that changed with your mood? The story has a simple message, to accept differences and learn to appreciate others for who they are. Emily knows who her mother was, but finds a different message when she comes to live with her grandfather. When eventually she finds out that her image of her mother was right all along, it is up to the others in town to accept a truth they don’t want to know. 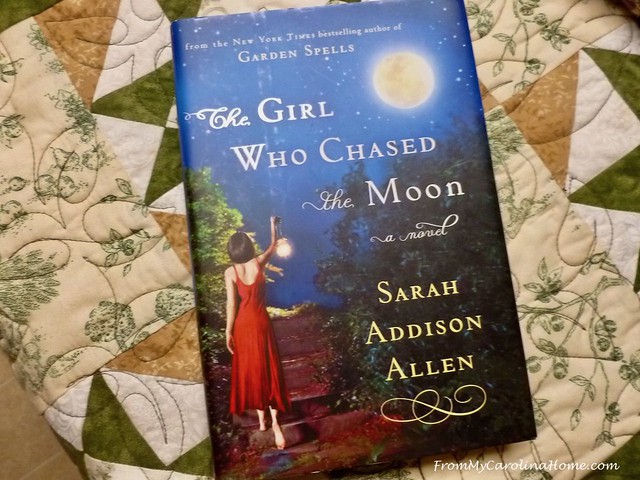 Did you notice my little hobnail footed vase full of hydrangeas?  It is a dark purple glass with a clear glass frog that fits the top.  Made by Viking in the 1950s and 1960s, it is from their line called Yesteryear.  It reminds me of my grandmother, as it was in her home for many years before it came to me. 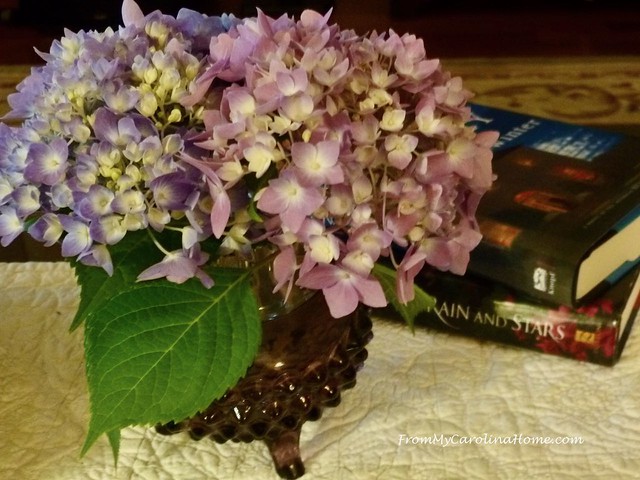 Update – Congratulations to Georgia Kirby and Sam VanSant who both won copies of the giveaway book from Sunday’s post, Girl Who Chased the Moon by Sarah Addison Allen.

Impression Obsession has fabulous stamps for cardmaking and scrapbooking.  Sale until 6/23!!  25% off with promo code FLASH