This quilt repair was certainly a different sort of challenge.  When the owner sent a picture, I was puzzled as to why a section was just missing, with the binding still intact.  He said that he had taken it to someone for repair, and she cut out the section that was bad.  Then she didn’t do anything else for weeks.  Presumably, she had no plan before she started, then had no idea how to finish. 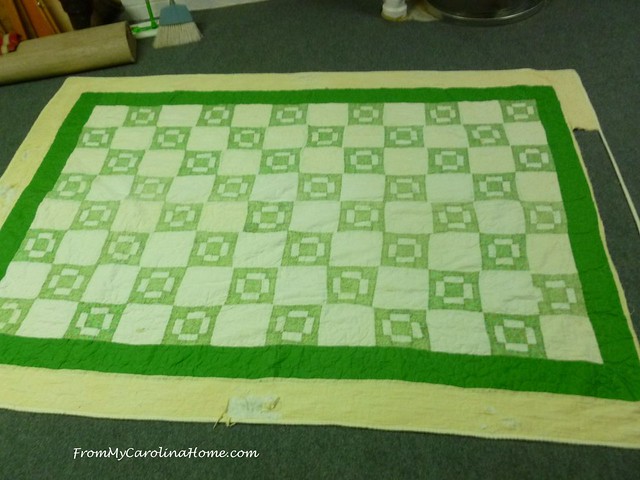 He finally went and picked it up, then contacted me to see if I could do something with it.  When it arrived, it was doubly strange, as the cut out section was roughly cut on three sides, then the binding seam was carefully picked out, leaving it intact. 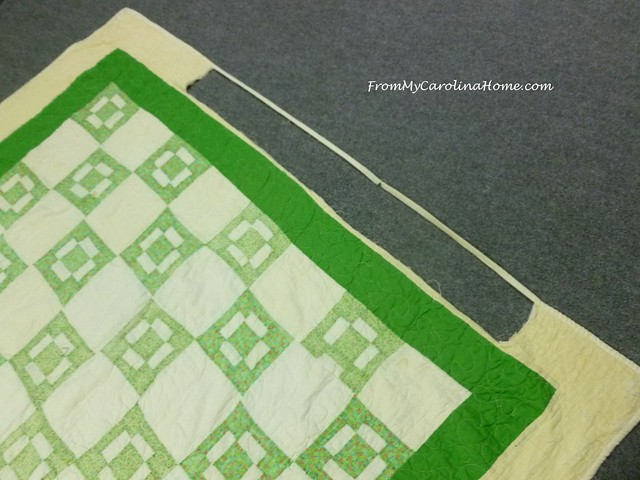 The yellow border had a lot of wear, and several places where it had just disintegrated.  The owner said the border was supposed to be white! 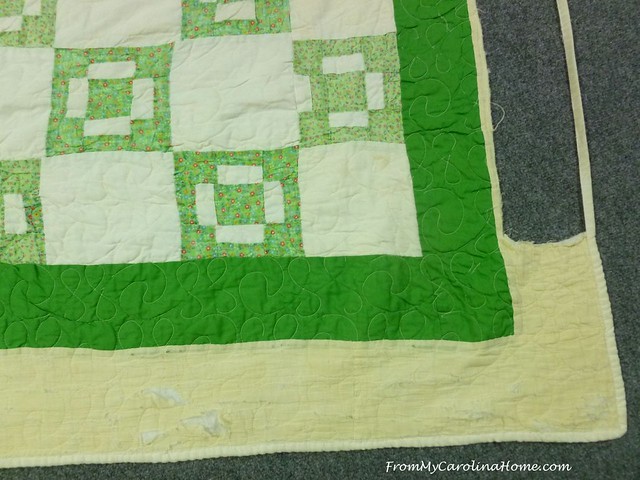 Damage like this was all around the quilt, more in the center of each border. 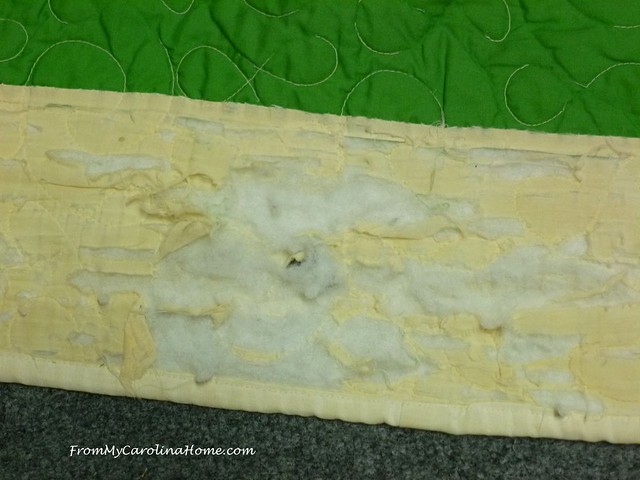 The middle section, which was the most important part to the owner, was still intact. 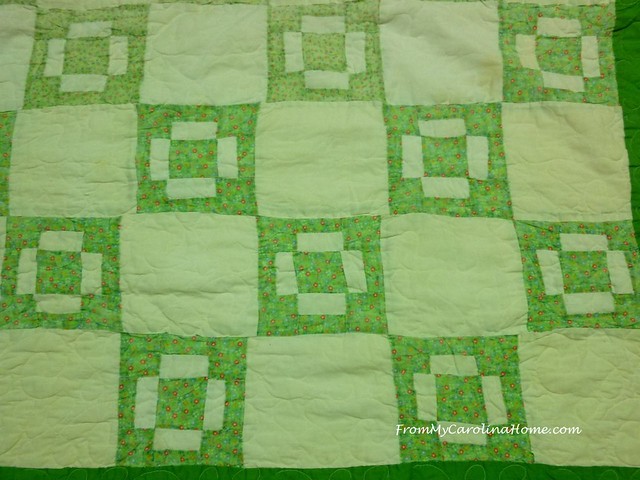 But every side had major damage in the border. 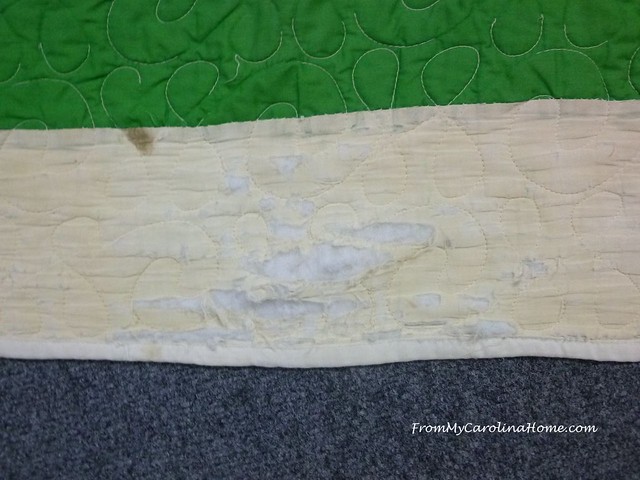 The back was in sad shape too, with multiple spots like this one… 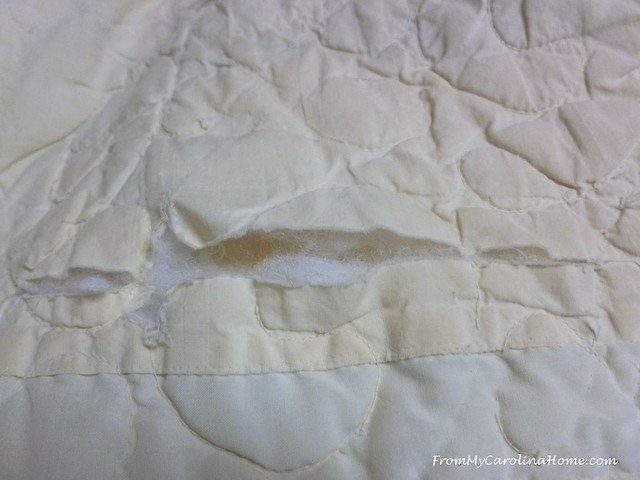 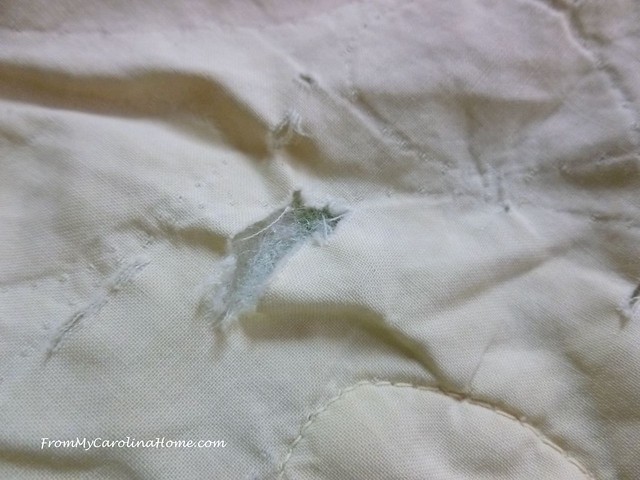 So, we agreed on a plan, and he sent the quilt with some yardage of a really nice white tone on tone fabric.  The damaged yellow will be completely covered.  I began by removing the binding all the way around. 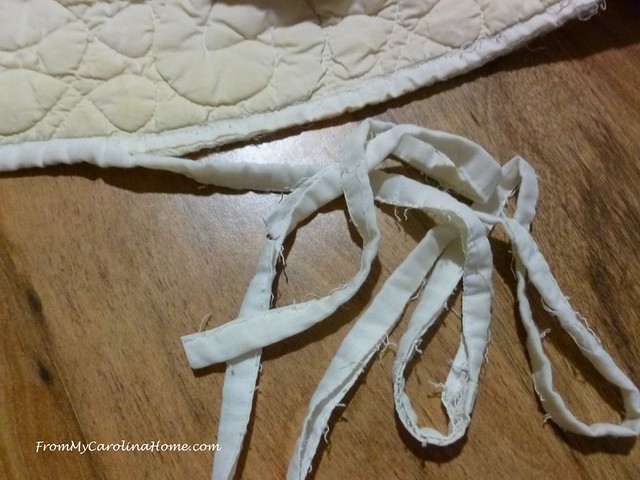 I laid out the quilt with the missing section on the table, and pinned in batting. 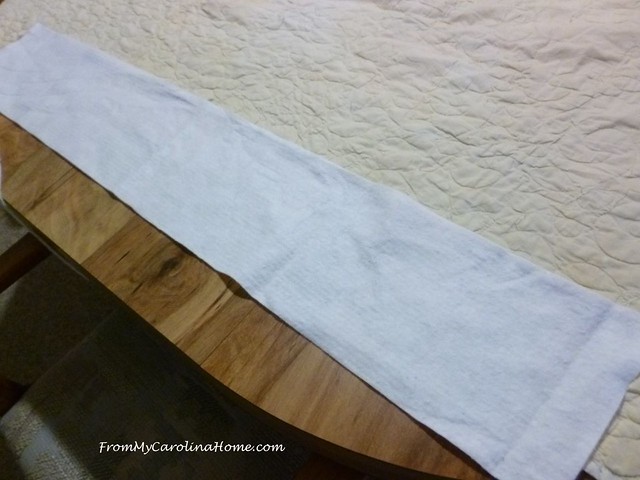 I sewed it into the hole with a zigzag stitch to flatten the edge. 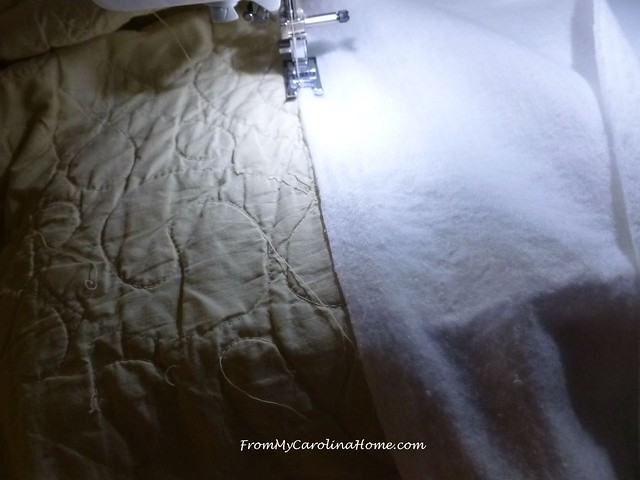 Then I began the borders.  I cut a strip of the new white border fabric wider and longer than the area to cover.  I was not removing the original border, so the entire original quilt will still be inside the new fabric borders.  I gave myself a generous 1/2 inch seam allowance to accommodate an uneven seam.  It is pinned with the fabric’s right side to the quilt. 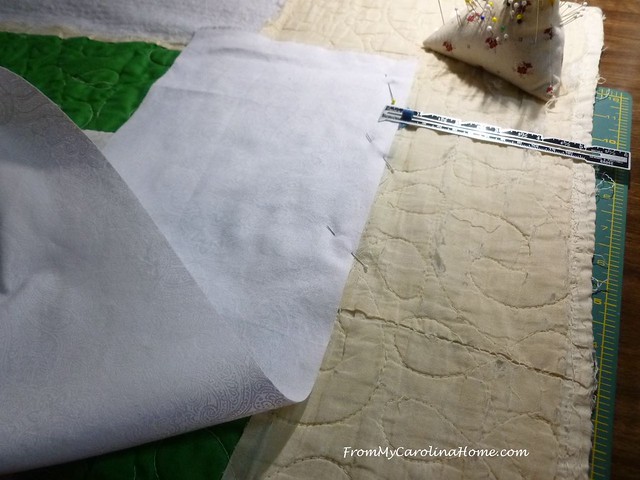 Then I stitched in the ditch of the quilt seam underneath.  By running my fingernail along that seam, I created a crease that told me exactly where to sew. 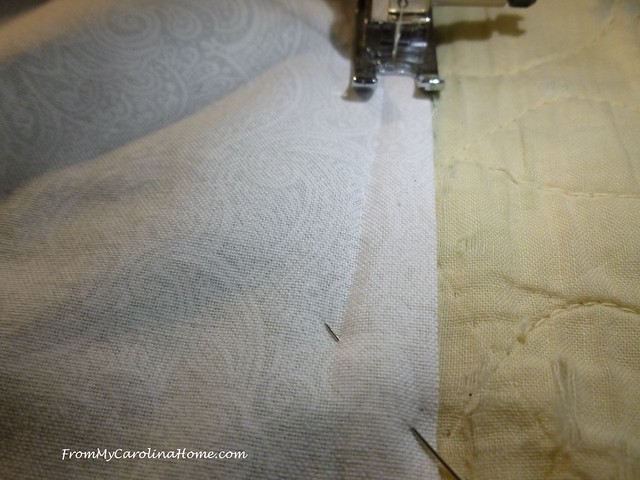 Folding the fabric over the border, I pressed it flat. 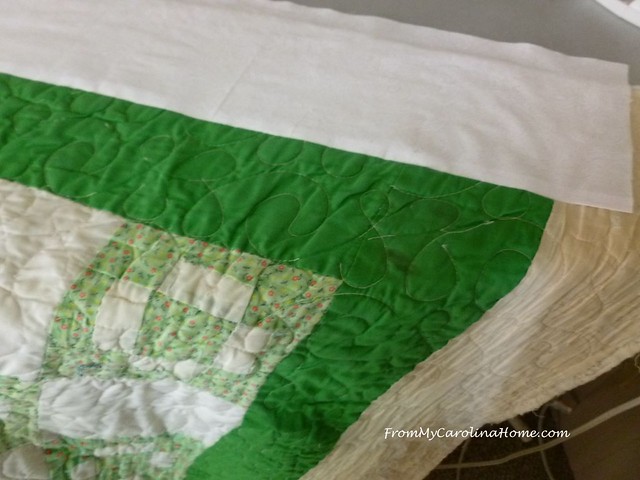 Moving on to the next side, I cut the next border strip this time making sure the strip was long enough to get to the top edge and cover the previous border strip’s raw edge. 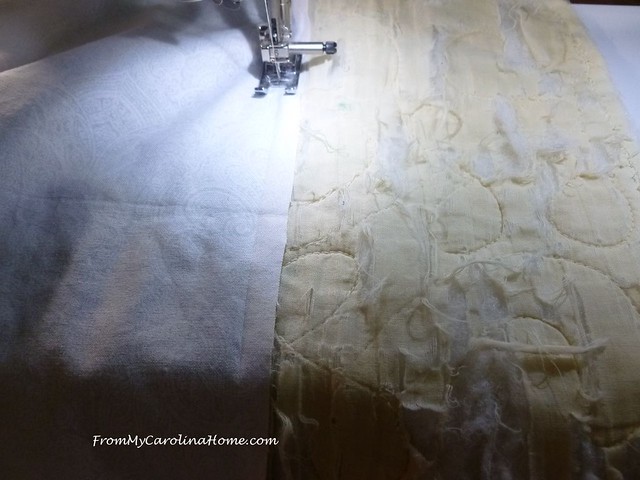 Stitching it down, this piece would go over the inserted batting. 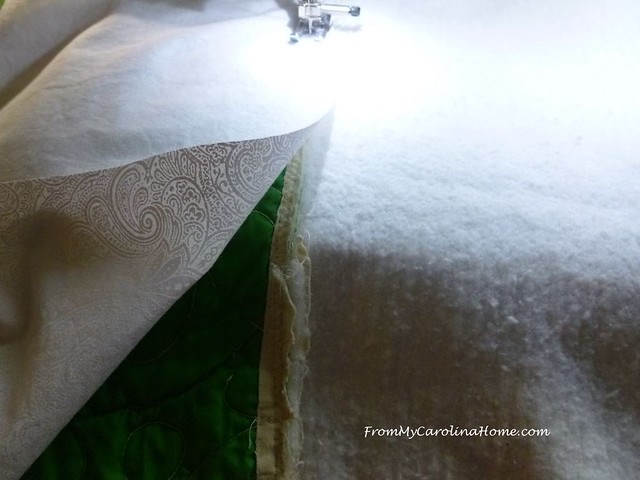 Pressing the seam, this strip will be folded up to cover the old part of the quilt and the inserted batting to reconstruct that side. 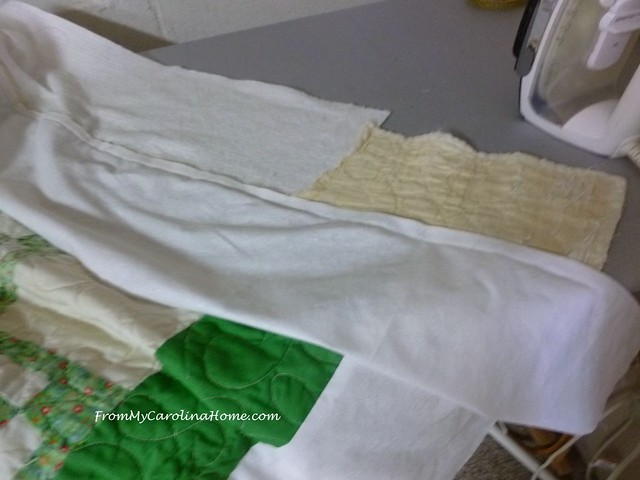 Looking better already.  I continued to do the remaining two sides the same way. 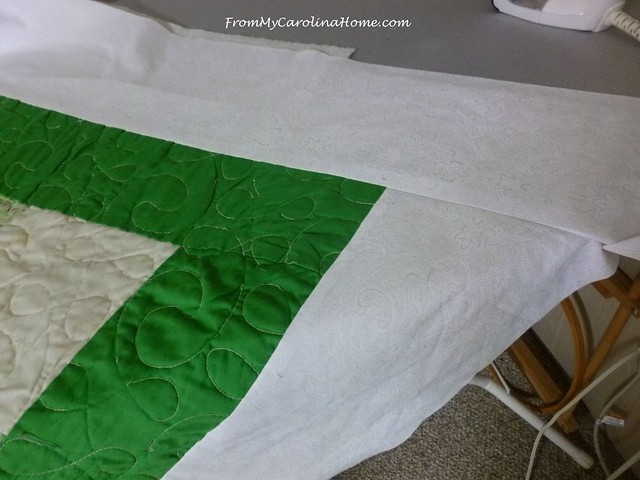 I loaded a wide muslin backing onto the longarm, then floated the top over it.  It didn’t need any additional batting.  My plan was to quilt the new borders to the new backing, thus covering up all the tears on the back with one large piece. 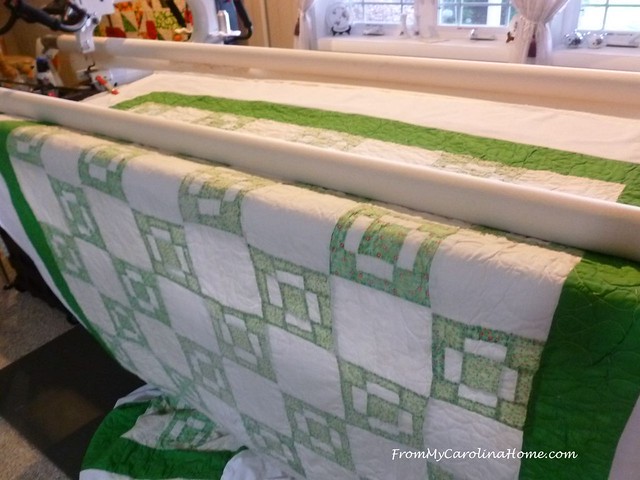 I began with stitching around the edge of the quilt, then stitching in the ditch on both sides of the green border. 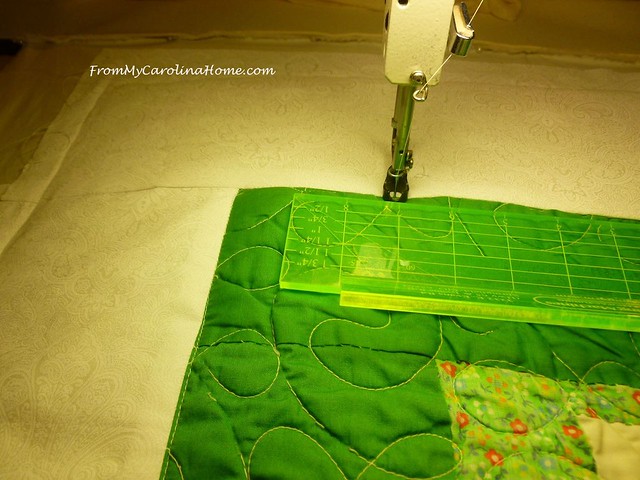 Taking a cue from the existing quilting, I planned to do loops on the new border.  I left the green border alone to preserve the original quilting, even though there were thread breaks. 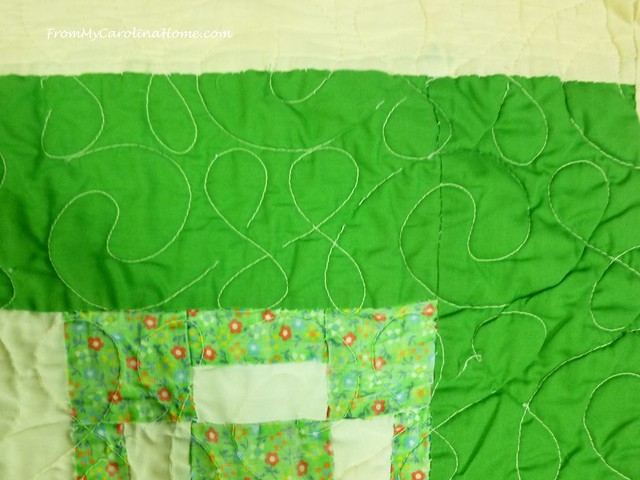 Quilting an over and under loop was fast.  I went across the top border, then down the right side, rolling the quilt as I went so I didn’t have to tie off and start again. 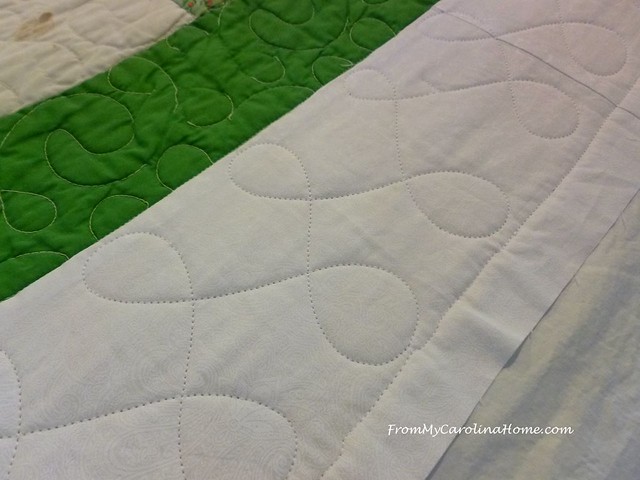 At the bottom, I quilted loops from right to left, then up the left side back to the top. 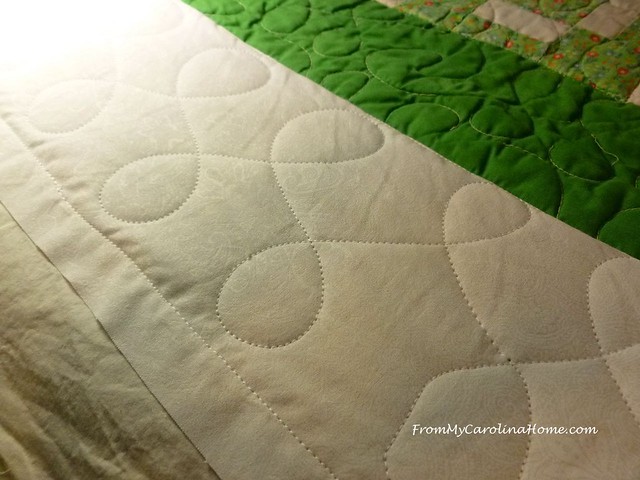 In the middle, purely for stability, I quilted in the ditch around the squares.  This quilting doesn’t really show, and preserves the original quilting on this section. 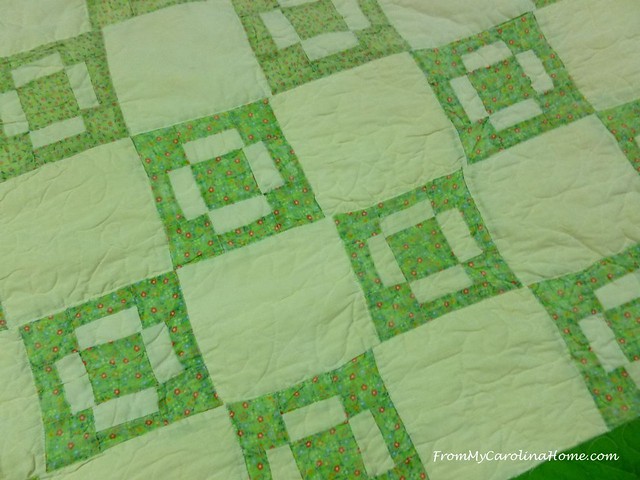 It is a bit hard to see on the backside, but there are large squares in the center, with two rows of straight stitching, then the outside border loops. 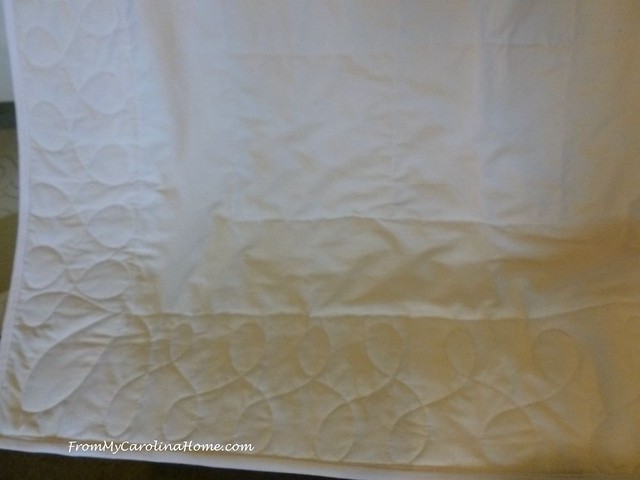 I made the binding from the same white fabric, stitching it to the backside first. 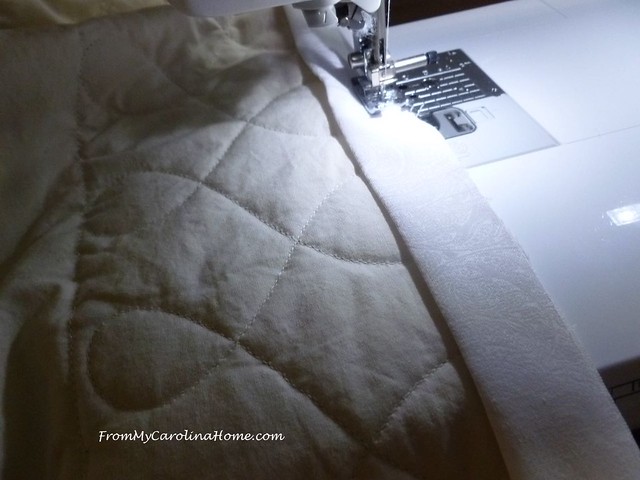 Then it is folded to the front and stitched down along the folded edge. 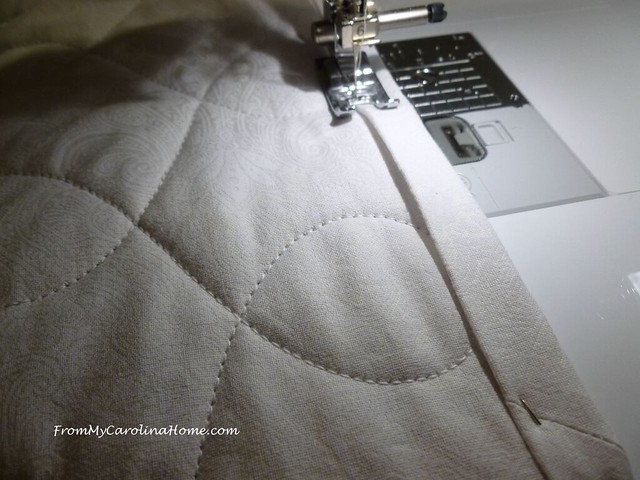 All done, the white fabric is nice quality, and you cannot tell where the hole was filled. 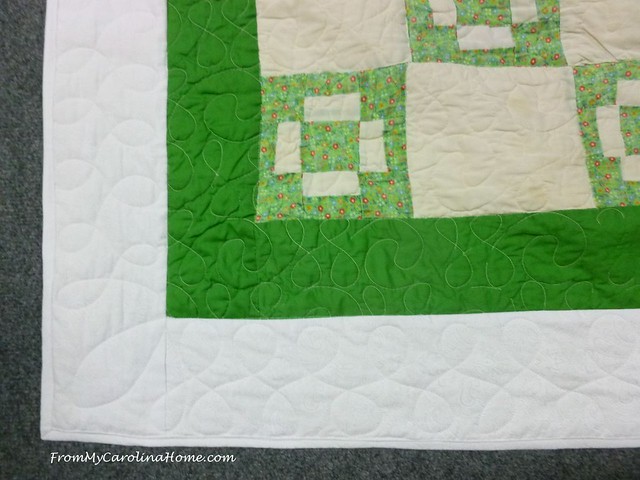 I shipped it back to the owner, it is arriving this week. 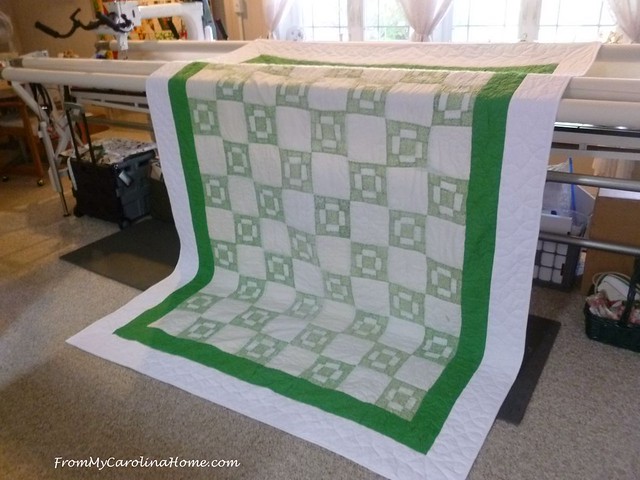 I think he will be happy with the new look.  He liked the pictures I sent.  At this point, I’m going to take some time off repair work until later in summer.  I want to work on my own projects for a while.

Update – The customer was thrilled.  He wrote “Carole, Hey WOOOOW!,   I just walked in for the road. and opened the box you shipped with my Quilt, and wow,  it looks like new!  but even better, that’s the old heart and soul of the quilt that my Grandma made!!!  Brought back to life By You!!  I just cant tell you how much this means to me! and my Daughter!  She just lost her mind when she saw it!  We are just thrilled,  you are truly a Craftsman, and master at your craft! Thank You so much!” 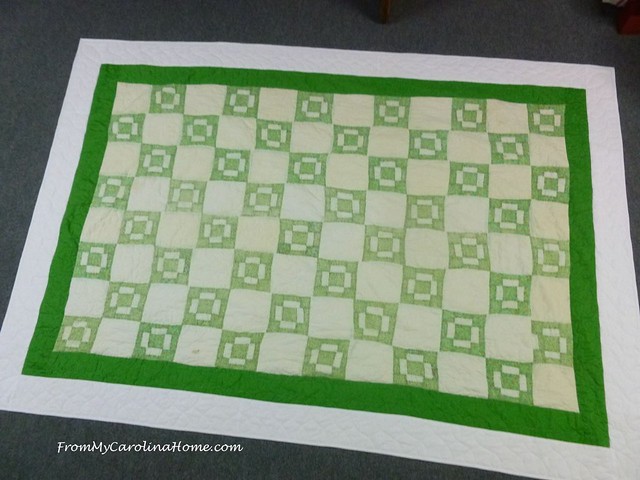 Using my affiliate links helps me to bring you free patterns and fun giveaways, I may receive a small commission if you use the link and make any purchase.  You still use your own existing account if you already have one.  Thank you!
Fat Quarter Shop has a special 20% off the Basic of the Month, 30% the Notion of the Month, and check out the Precut of the week and Daily Flash Sale – something new at clearance pricing every day!
Amazon Prime Deals!, Shop Amazon – All-New Kindle deals
Impression Obsession has fabulous stamps for cardmaking and scrapbooking.
C&T Publishing has a wonderful books on quilting and sewing.

31 thoughts on “Quilt Repair with an Unusual Challenge”