Our longarmer association recently did a quilt retreat for a weekend as a way to get to know each other a bit better.  I wanted to carpool because it is just more fun for a 3-hour drive to have friends along for the ride.  Two ladies went with me, and we stuffed the car but good.  Nothing else would fit in the trunk… 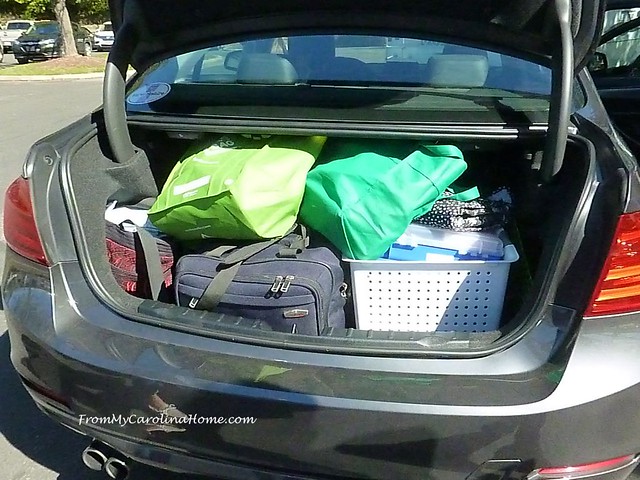 plus half the back seat was full too.  We had to balance a cheesecake on the armrest in the back, plus we had two large baking dishes full of great food for both evening meals.  And this was with all of us paring down to fit.  But, these make the best stories, don’t they?  We just piled it up and made it fit. 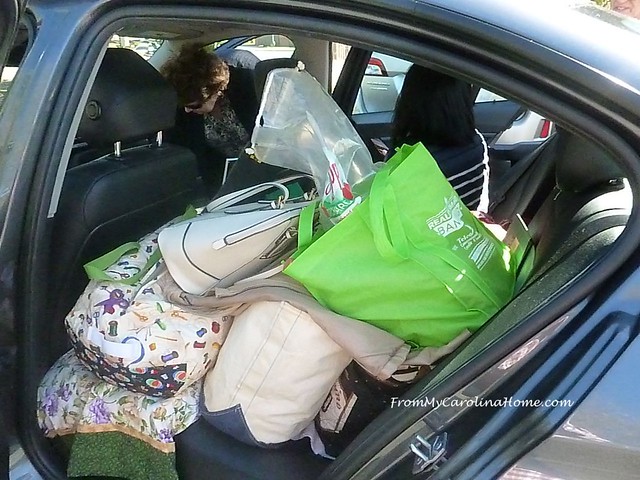 We laughed and talked all the way to the retreat location.  It was a charming farmhouse in Tennessee.  Quilts adorned the walls here and there. 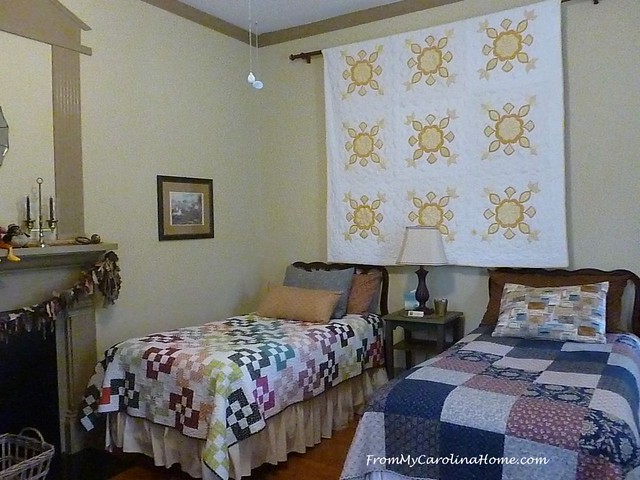 Pretty bedrooms had quilts on all the beds. 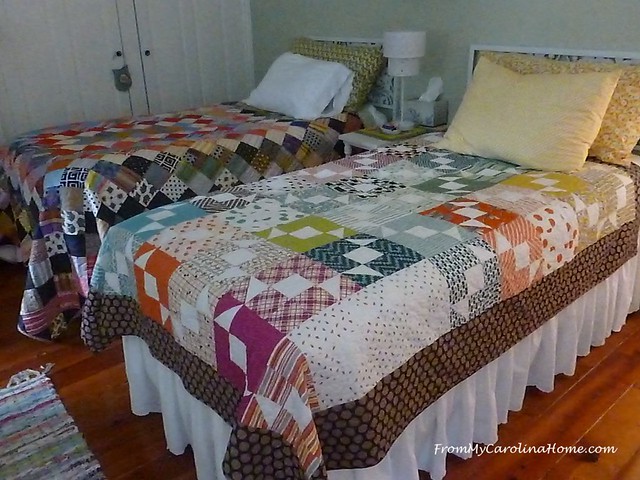 A cozy dining area had three tables and rustic decor on the walls.  We had brought all the food we would need, and more.  Each of us took a part of a meal, and of course we had more snacks and sweets than we could finish.  But we did try, LOL!!  There was some protest as I suggested that we make an effort not to sit in the same place twice, so we would mix around and eat with everyone over the course of the weekend.  But we did it, and it was fun. 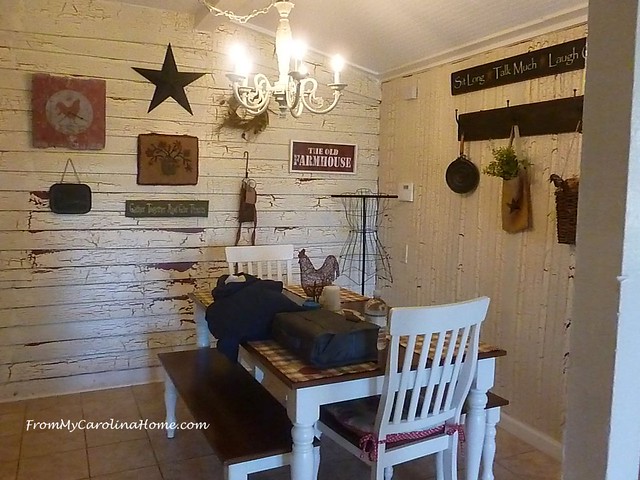 The workroom was fabulous, with comfortable chairs and lots of space.  Since there were only seven of us, we each got two tables. 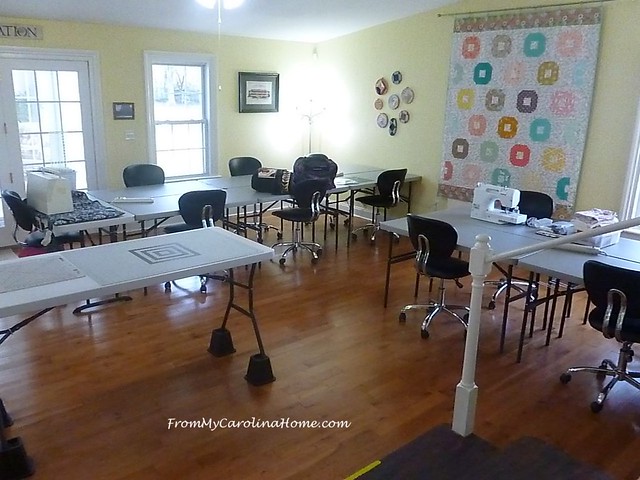 We started in sewing as soon as we could get changed into pajamas! I began working with the jelly rolls I had brought for a patriotic quilt. 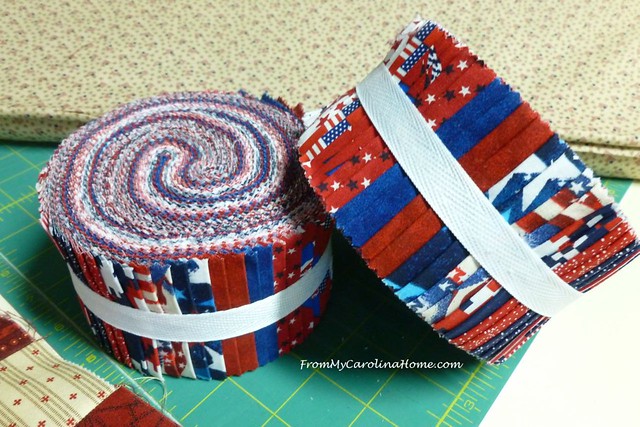 I sewed long strips in sets of three, then cross cut them.  This made really easy nine-patches. 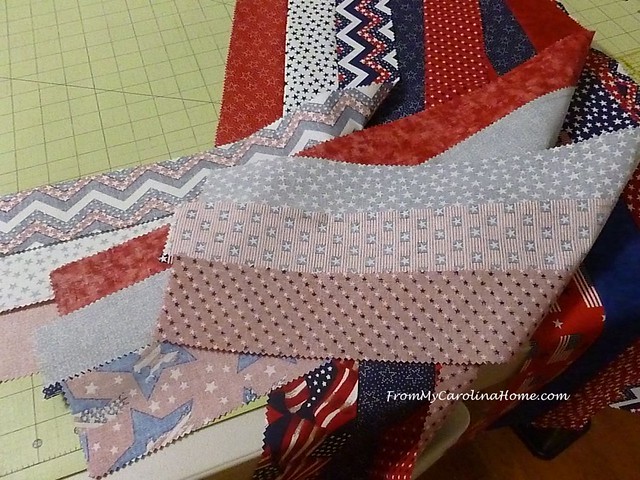 I got most of that done on Friday night, then we made dinner, chatted, and looked around a bit more.  Pretty quilt tops hung on embroidery hoops graced a wall. 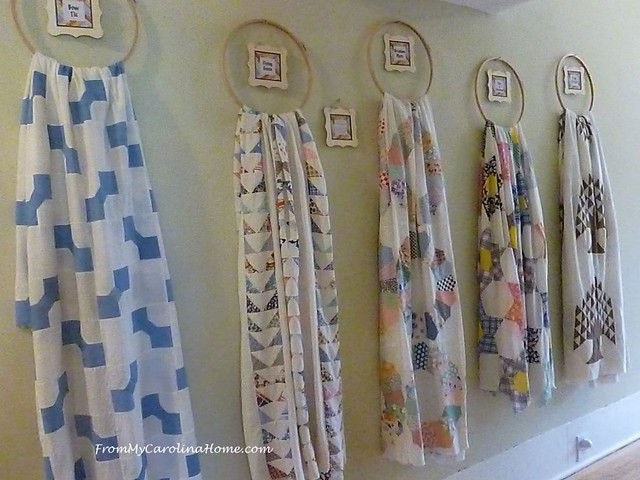 Every nook of the two story farmhouse had a country quilt feel.  It was charming, but, I cannot recommend it.  The Whistlestop Quilt Retreat in Sweetwater, Tennessee had one major problem – the railroad track that ran past the house.  They make sure you know about it, with a train on their signs and websites, and owners had assured us that we probably wouldn’t hear the trains after the first few. They also mentioned that they provide earplugs, which should have been a warning to us.  They failed to mention that a railroad crossing with gates and lights was within 50 yards of the house.  Trains came through blasting their horns all night both nights, and no one got an uninterrupted night’s sleep either night. 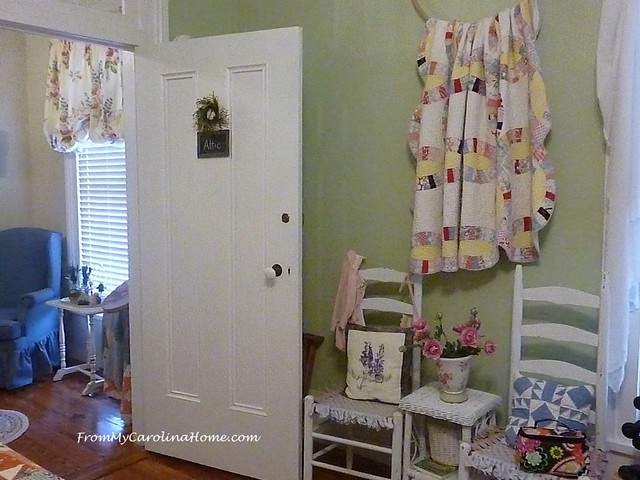 Six trains thundered past the house horns blaring on Friday night about an hour apart.  The earplugs were not helpful, as their horns were so loud the noise came roaring right on through anyway.  At 5 am I gave up and got up.  I made coffee and went outside for a moment to enjoy the cool air, and a moment of quiet.  Then, back into the workroom as more quilters got up too.  I began the second part of the nine patch star project.  Marking half square triangles is a tedious chore when you need 160 of them, but goes by in a flash when you are sewing with friends. 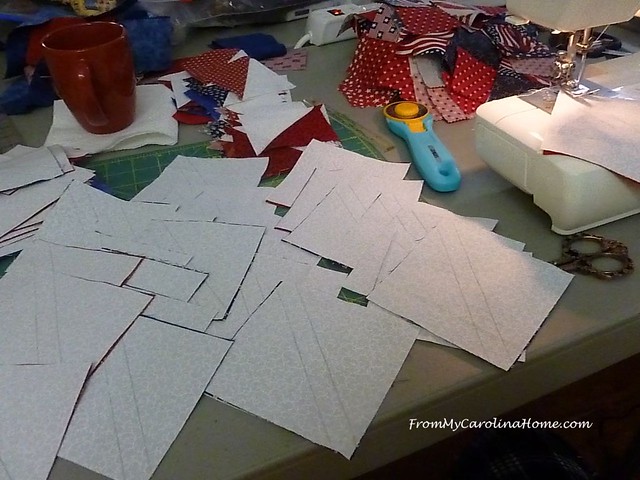 So, I was on the way to having the elements for nine-patch stars.  Once I had all the HSTs sewn, pressed and squared, I put two block elements on the design wall to test whether I wanted the star points to be all red on one side and all blue on the other, or mixed up.  I liked mixed up best. 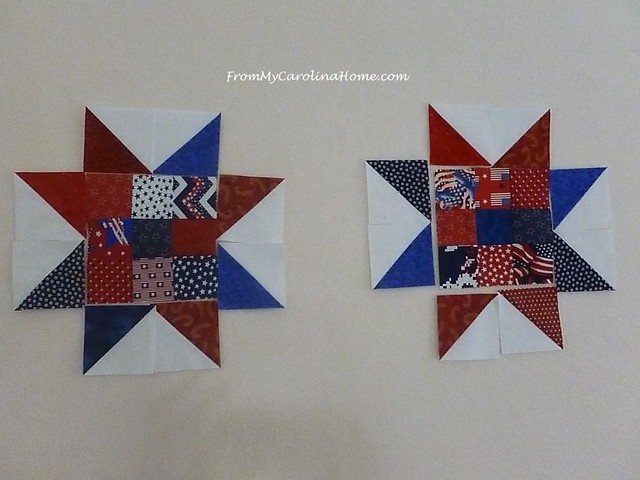 Once I got all that done, I realized that I didn’t have the corner squares.  I sewed the center to the sides, and that was as far as I could go.  Not to worry, I had more projects to work on.  One thing I always do is take more than I think I can finish, because I always work faster than I think I can.  Plus if I am missing an element, I won’t be left with nothing to do. 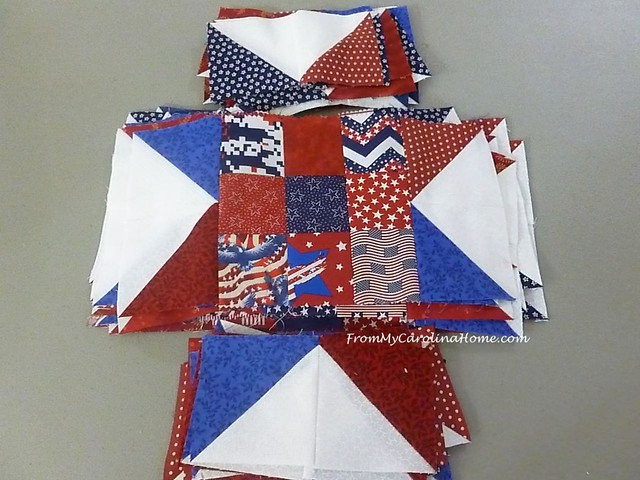 On to the next project, these blocks were made at a day retreat last February.  I had brought sashing strips with me, already cut and ready to go. 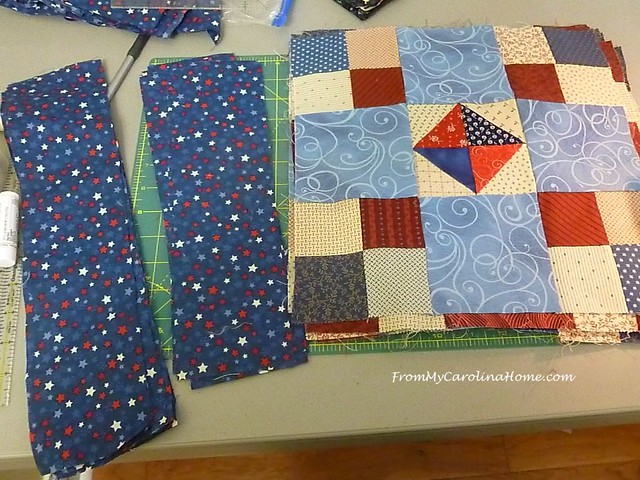 I sewed all the strips, then put the blocks on the design wall to figure out the placement.  Those light blue ones were giving me a hard time.  I tried several placements, distributing the light ones around, but nothing looked really right.  With the help of my fellow quilters, this design they came up with looked best, with the red, light blue and dark blue in diagonal lines.  I sewed it together this way and added the final two border strips.  More about this quilt later. 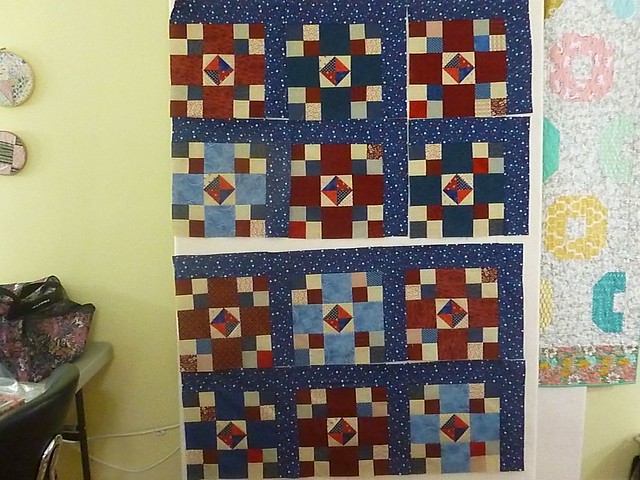 We spent another restless night of train horns blasting, thankfully only four on Saturday night.  The next project was to put together the paper pieced Japanese Teacup for the Teacup Quilt Along.  I was done in less than an hour.  Thankfully I can just about do this in my sleep, as I almost had to. 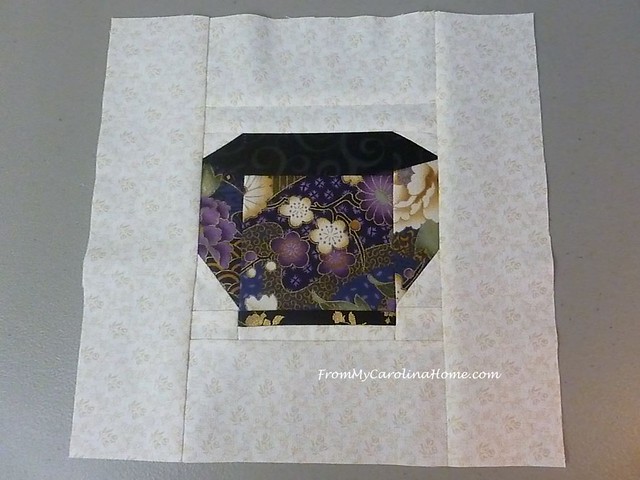 I had time left, so I made two new Hot Pads using the method I showed on the Autumn Jubilee tutorial. 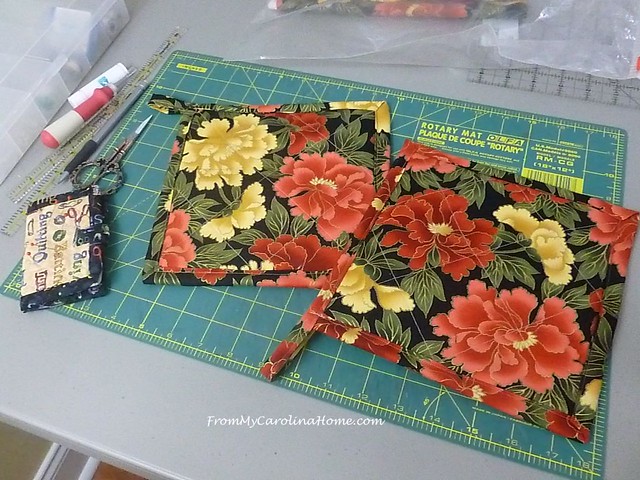 I still had one more project with me, my unfinished wool stitchery from Autumn Jubilee, but by now it was Sunday afternoon and I was out of time.  Packing up, loading the car and heading home, we talked almost the whole way about how much fun we had, and how much better it would have been to be able to get a good night’s sleep.  We are going on retreat again next year, it was just too much fun not to do it again, and hopefully this time more of the group can go.  But, we won’t go back there, we’ll try another one.

Have you been on an overnight quilt retreat?

43 thoughts on “Going on Quilt Retreat”